The lights over the sea: The most spectacular lighthouses in Vladivostok 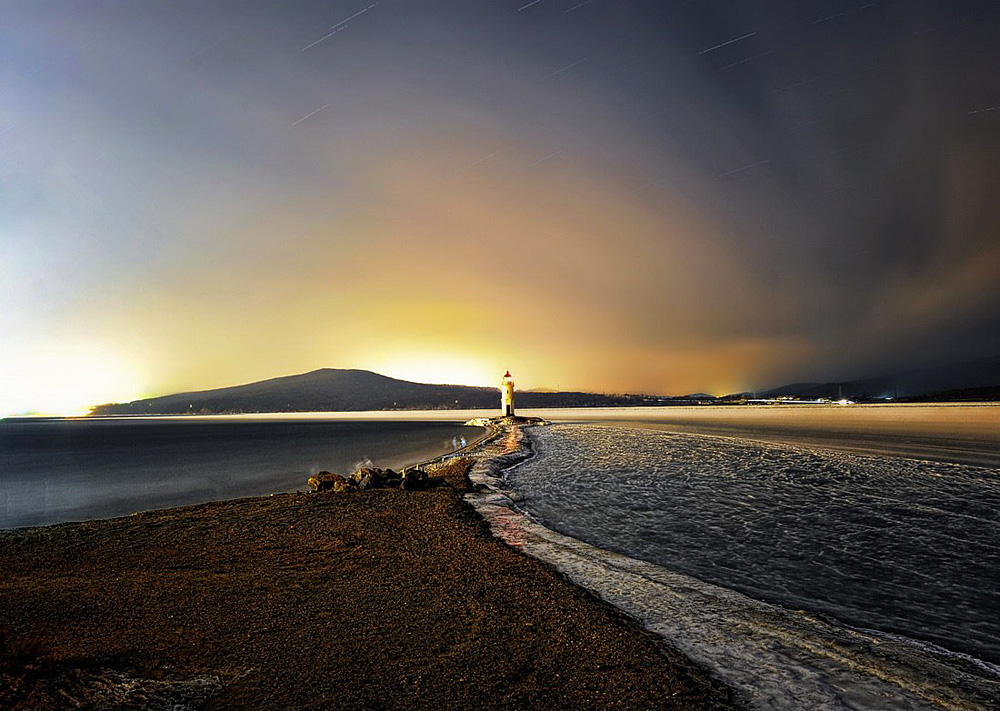 Yury Smityuk
The main symbols of Vladivostok are its famous lighthouses and bridges. Romantic or creepy, abandoned or in excellent condition - we take a look at the most picturesque ones by far. Finding all of them can make for a fun weekend project, if you're in the area.

In a sea town lighthouses perform several functions. They are not only navigational aids, but also city attractions. Those found in the chief Pacific Ocean city of Russia, Vladivostok, are no exception. 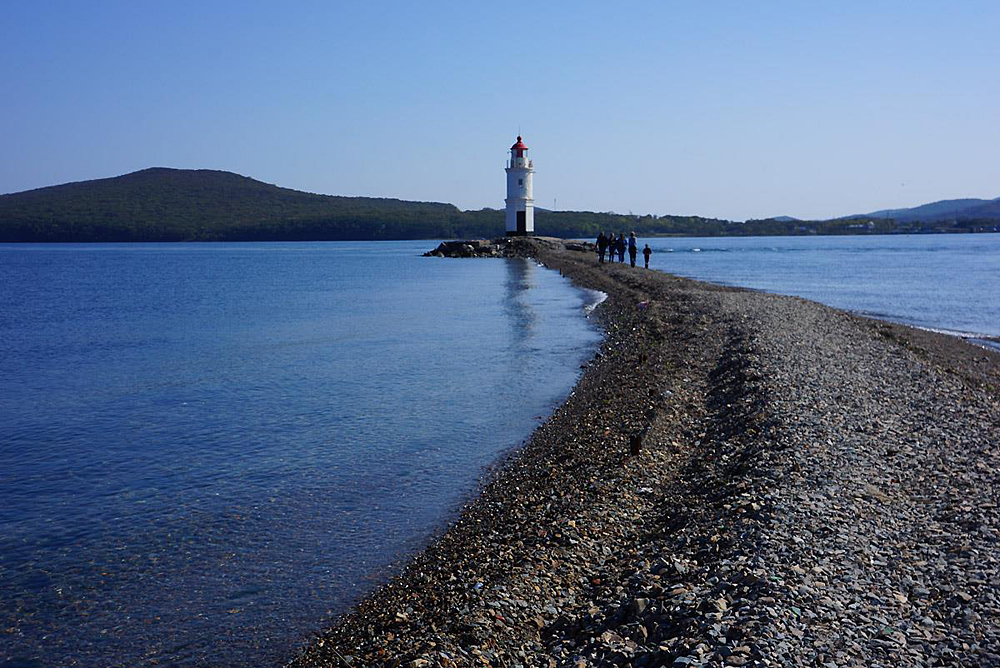 Photo credit: Yulia Shandurenko If you ask a Vladivostok resident the way to the lighthouse, they will immediately direct you to the Tokarevsky Lighthouse, “Egersheld” (this is how the south-western region of Vladivostok, located on the Shkota peninsula, is referred to. There are several lighthouses in the city, but “the lighthouse” refers just to this one. The Tokarevsky lighthouse is at the very edge of the Muravyova-Amur peninsula, on which Vladivostok is located. This place resembles the edge of the world and thus is a popular tourist hotspot.

The lighthouse is located on the end of a long sand bar (at high tide it submerges beneath the water completely), which is called “Tokarevsky cat” — after second-rank captain Tokarevsky, who worked as the primary minesweeper of Vladivostok at the end of the nineteenth century (he was a specialist serving mine armament ships). From here the Russian island and sea routes to China, Korea and Japan are visible.

Tokarevsky lighthouse is also the star of several movies (one of the latest is “Tale in the Darkness” by Russian director Nikolai Khomeriki). During the winter it is possible to see seals, resting on the ice floes or hunting for smelt. 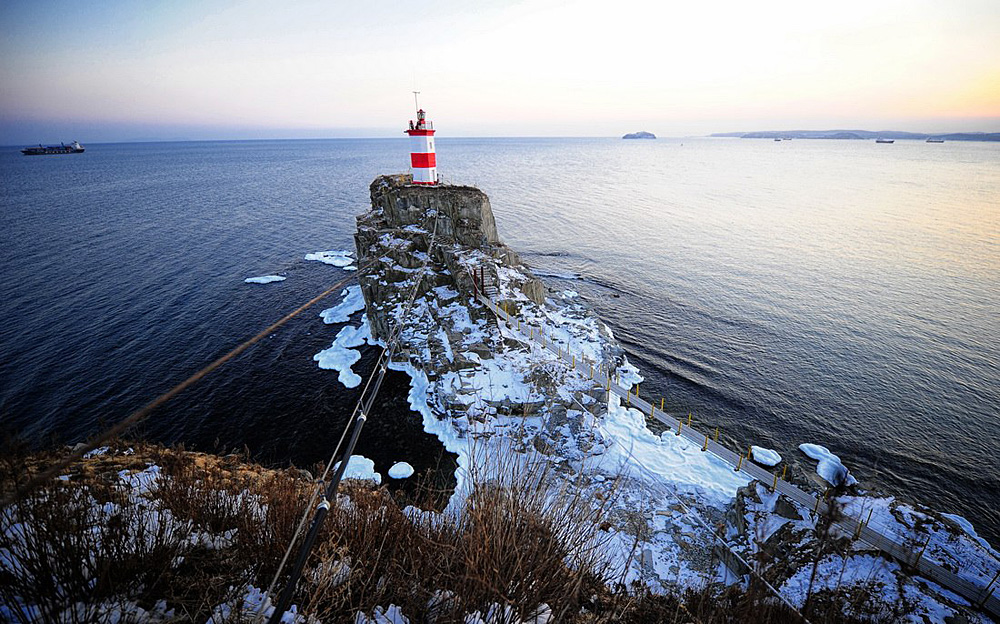 Photo credit: Yury Smityuk Getting to the other lighthouse of Vladivostok, bearing the name of admiral Vladimir Basagrin, is not so simple: It is located on the territory of the Ministry of Defense in the Patroclus bay area. The lighthouse first appeared as a wooden building here in 1937, and the lighthouse in its current form — stone with an 8-meter high tower — was built in 1958. Recently the GLONASS system was established here, which improved the safety of navigation, but the traditional fire on top of the tower continues to be in demand.

Basargina Lighthouse is the favorite “natural” scene of local artists and photographers. It is frequently depicted in calendars and postcards: Dark blue sea and grey rocks, on which gulls and cormorants build their nest, and the red and white lighthouse. It is best to view the Basargina lighthouse from the sea by renting a boat. 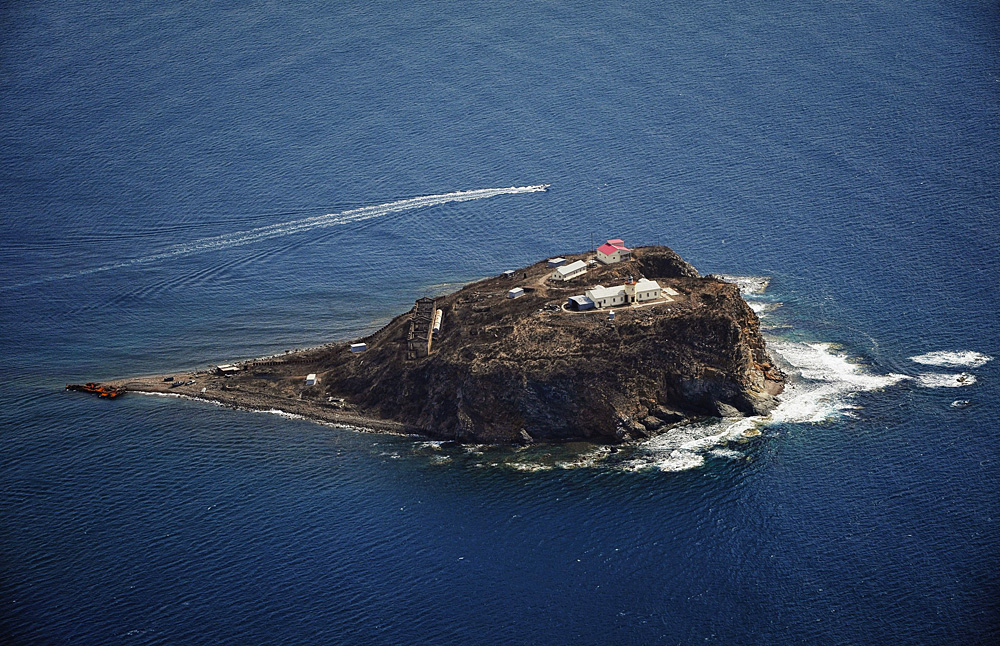 Photo credit: Yury Smityuk Another lighthouse operates in tandem with the Basargina lighthouse, constructed on Skrypleva Island alongside Vladivostok. During World War II, an anti-aircraft (and according to other sources — anti-boat) battery was located on this small island and was operated by women, as men were sent to the frontline. Remnants of the barracks have remained until this day, but the military no longer remains on Skrypleva Island — just the lighthouse. It is the oldest lighthouse of Primorye, having been built in 1876 and continues to be in service today.

Combined with the neighboring Basargina lighthouse, the lighthouse on Skrypleva Island forms a sea gate to Vladivostok: Skrypleva lights up in red, while Basargina is lit in green. Indeed it is on approach to Skyrpleva Island that captains ask for permission to enter the port of Vladivostok. Foreign captains enlist maritime captains here. 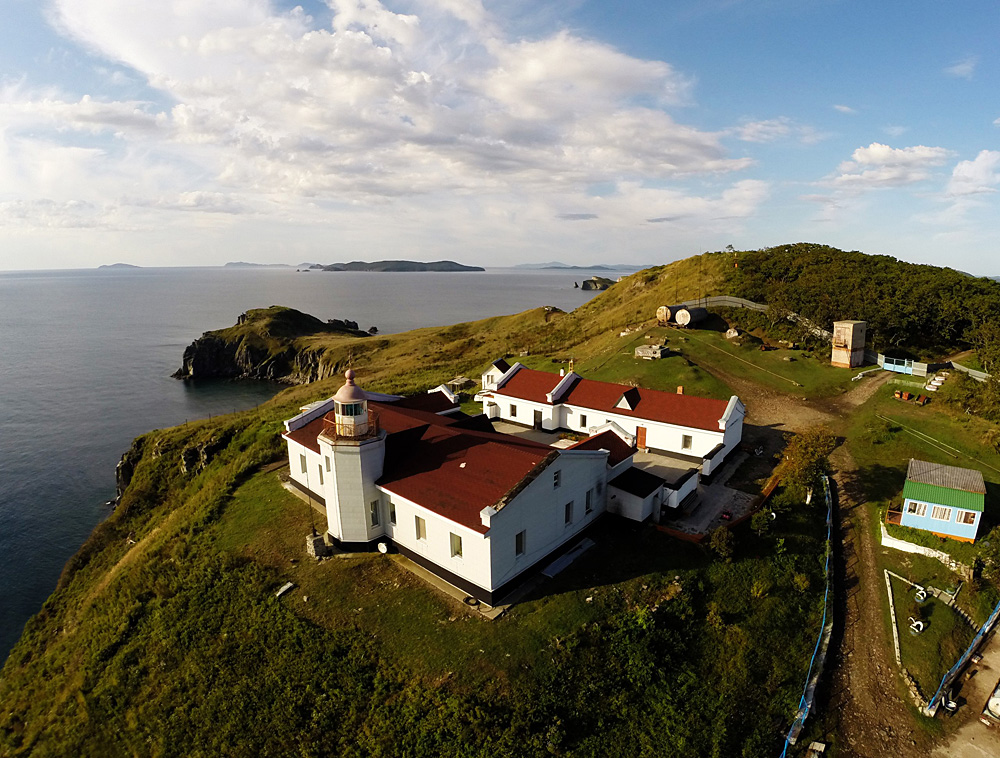 Photo credit: Yury Smityuk There is yet another lighthouse in the vicinity of Vladivostok, located near the village Slavyanka. It is called Bruce lighthouse and is located on a picturesque promontory of the same name: a rocky cliff of grey basalt stone, sparkling in the sun on the sea.

It is believed that the cape and lighthouse were named after Jacob Bruce, an associate of Tsar Peter the Great, a participant in the Crimean campaigns and the first Russian mason, mentioned in Alexander Pushkin’s poem “Poltava.”

However there is also another version. The Bruce peninsula was first described in 1885 by the crews of the British warships “Winchester” and “Barracuda.” At the time Vladivostok had not yet been established, and the place, where the city is located today, the British named “Port May.” At the same time on British charts the names “Cape Bruce” and “Bruce Peninsula” appeared — referring to British admiral Bruce, who commanded the British Pacific squadron during the Crimean War. The Russians, who came here just a few years later, kept the English name and interpreted it in their own way.

The Bruce Lighthouse was built in 1911. Its original appearance is retained to this day: A white stone tower 10 meters tall, coupled with a one-storey building. Nearby is the old sea bell (“ship’s bell”), which helped send signals afar during cloudy weather when the lighthouse’s fire was not visible. Today in bad weather, modern equipment helps deliver the signal. 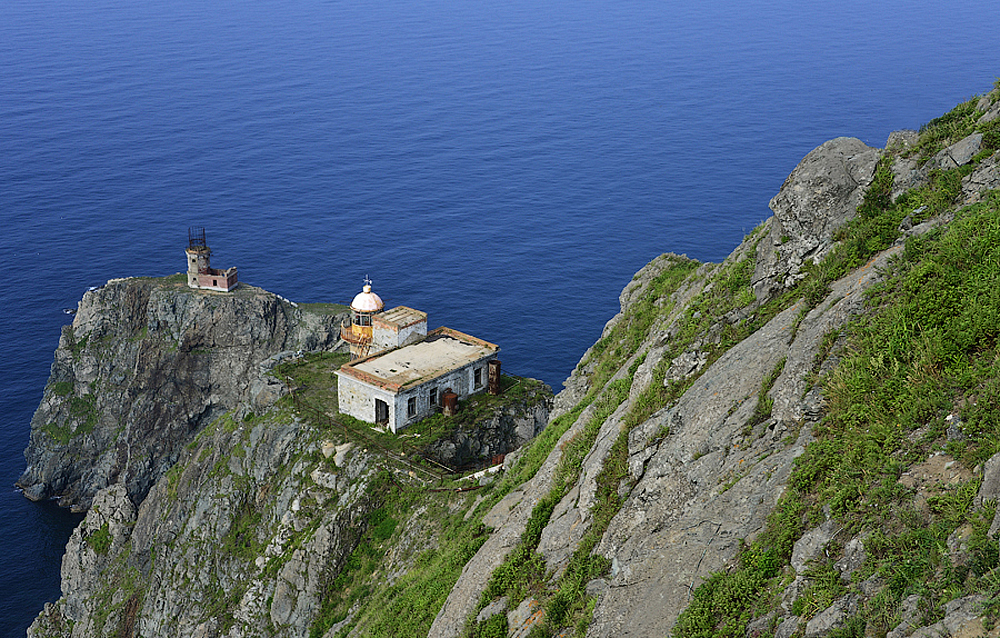 Photo credit: Yury Smityuk On Asklod Island to the south of Vladivostok, one of the most interesting and inaccessible of local lighthouses is located. Several legends are also connected with this island.

It was here in 1868 that the “Manzovskaya War” started (Manzo is what the Chinese who lived on Primorye were called). At the time, Chinese miners, who were illegally mining Asklod gold, came into conflict with the Russian authorities, having killed and wounded several sailors aboard the schooner “Aleut.” Then the “hunghutz” — Chinese bandits — burned the villages Shkotovo and Nilskoe (the current city of Ussuriysk). An attack was expected on Vladivostok, and only the intervention of the Russian army was able to put an end to the conflict. In Soviet times the air defense town was built there, but then was abandoned — empty houses, water supply, a school and hospital still can be found there.

Old residents say that in 90 years of the twentieth century, a new war broke out here — “copper”: The remaining, unemployed residents of Primorye pilfered the remaining scrap metal left from the military unit and town. Now on Asklod only the lighthouse located on steep coastal cliffs and its caretaker remain (not including the visiting poachers — sea slugs are found here in the sea and deer in the woods). Heat is produced from a wood burning stove, while electricity comes from a diesel generator. There is no transportation to the island, but infrequently a gun boat will travel there with fuel imports and products. The current lighthouse was built during the Soviet period, but nearby the old lighthouse, built in the early twentieth century, has been preserved. This lighthouse is located on a cliff, and reaching it is almost impossible because the staircase leading there is partially destroyed.

6. Lighthouse on the roof 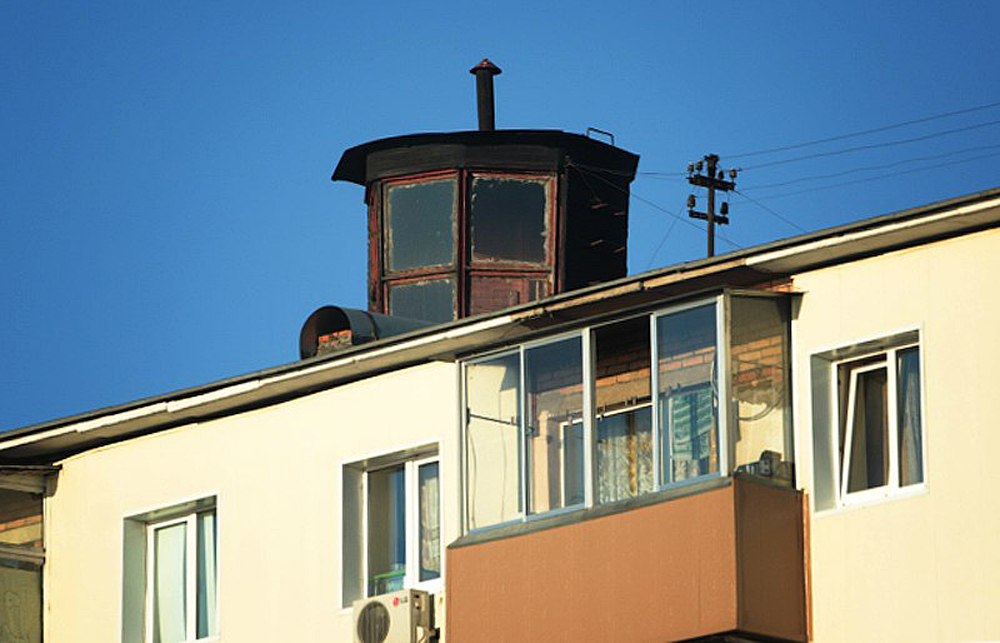 Photo credit: Yury Smityuk The most unusual lighthouse, which describes the maritime nature of Vladivostok the best, is located near the bus stop “Molodyozhnaya”. It is located right on the roof of a house — a normal five-story Khrushchev-style building — and is clearly visible from the sea, as well as from Prospect 100 years to Vladivostok. To be precise, it is still a “glowing navigational sign,” but in everyday life it is just referred to as a landmark lighthouse.

This object, under the competence of the Pacific Fleet, existed here during the days when this place was considered the suburbs of Vladivostok. In 1960 after the visit of USSR leader Nikita Khrushchev the project “Large Vladivostok” was launched and the city began to grow rapidly toward the north. By law construction near navigation equipment was not possible. But so that the new street – Prospect 100 years to Vladivostok — would be straight, the navy chiefs decided to make an exception and allow luminous signs to be moved on to the roof of a new house. For almost half a century already, this lighthouse has served and helped ships moor in the Likhternaya harbor of Vladivostok.