Insider’s guide to Yekaterinburg: A journey through space and time 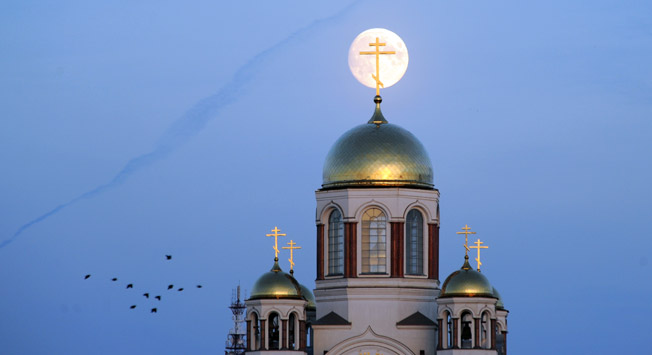 Pavel Lisitsyn, Ria Novosti
Yekaterinburg is a mystical place. It grew out of a hole-in-the-wall miners’ town to become Russia’s third metropolis. Yekaterinburg was a closed territory for several decades, but today it has transformed into a strange metropolis, full of mysteries, which seems to live in several dimensions at once. Ultramodern buildings stand side-by-side with 18th-19th centuries and Soviet era houses.

Take a few steps in a different direction, and instead of a modern city district, similar to a small New York City, you may suddenly find yourself in the early 20th century, walking down an old side-street lined with pre-revolutionary buildings.

Yekaterinburg is currently one of the four most populous cities in Russia and is a major industrial center and transportation hub of the Trans-Siberian Railway. Russia’s first Emperor, Peter I, founded the city in 1723 as a factory-fortress located on the river Iset, and it would eventually serve as the final resting place of the last Emperor Nicholas II. During World War II, more than 50 businesses were evacuated to Yekaterinburg, as well as the State Hermitage collection and the Chekhov Moscow Art Theater. Again, during World War II, the most powerful radio transmitter was located here, the world's first jet BI-2 jet was tested here, and the Uralmash-15000 drilling rig was created here, which was used to develop the deepest parametric wells in the world (Murmansk region).

Must see attractions
Usually when arriving in Yekaterinburg, foreign tourists and businessmen consider it their duty to visit two attractions: a stele which stands symbolically for the border between Europe and Asia (installed at the 17th km of the Moscow highway) and the place where the royal Romanov family was murdered. However, there are many more amazing places to see in Yekaterinburg.

If while walking around the historic center you happen to notice a line drawn in bright paint, you can safely follow it. The Red Line pedestrian trail passes through the 30 major cultural sites in the city center, from the oldest building to the most legendary mansions and unusual museums.

More than 50 museums operate in Yekaterinburg. The most famous piece of all is the Large Shigir idol, which is the oldest wooden sculpture in the world, indicating that people lived in the Urals and made sculptures for another 5000 years before the construction of the Egyptian pyramids. The Ekaterinburg Museum of History displays artifacts that were found in the territory of Greater Yekaterinburg dating from 8000 BC. The United Museum of the Urals Writers is one of the largest literary museums in Russia, occupying an entire city block. The Museum of Fine Arts in Yekaterinburg exhibits genuine masterpieces of Russian avant-garde artists of 1910-1920, as well as the works of most styles and leading artists of Russia and CIS countries from the entire period of the 1990s.

Yekaterinburg’s monuments can cause quite a culture shock for any tourist. Sometimes they grow literally overnight, out of nowhere. There is one monument to the Invisible Man, represented by footprints of different sizes, another dedicated to curiosity, a keyboard, and even Love, which features a 7-ton boulder of pink rhodonite that was mined from one of the local fields. Most of the unusual cast iron and bronze art objects are located on Weiner Street, which was founded around the 1740s, making it one of the oldest streets in Yekaterinburg. Here you can find the monument to Michael Jackson in Russia or the monument to the inventor of the first bicycle, Artamonov. Also, if you meet a bronze dog on the street, don’t forget to rub its nose! It's for good luck.

Local records
Yekaterinburg is Russia's only city where every year it publishes its own book of records. Any resident or agency can declare their achievements. A special commission is appointed to verify that the information is accurate. The most famous “ordinary” resident of Yekaterinburg is the die-hard traveler Igor Yamangulov, who has traversed through Russian, CIS, and foreign routes, the total distance of which exceeds the length of the equator.

A few years ago, Yekaterinburg itself entered the Guinness Book of Records as the city with the highest consumption of mayonnaise per capita than anywhere else on the planet. It largely was determined by the city’s local cuisine, where most of the dishes contain mayonnaise. The signature dish in many cafes is Ural dumplings, for which citizens of Yekaterinburg express their passionate love for by periodically making giant dumplings. The last giant dumpling was 50 kg. A specially made two-meter rolling pin was used to roll out the dumpling, and a crane lifted up the culinary masterpiece in order to lower it into a boiling 900-liter vat of water. The giant cooked over a half hour before feeding all comers.

In the summer, one can visit the most popular recreation and fishing destination – the Volchikhinskoe reservoir hydrological and botanical nature monument, which is often called the Sverdlovsk Sea for its vast dimensions. Then in the winter, one can take a trip to the ski slopes either on Uktusskie mountains, which border the metropolis, or to Wolf Mountain, which is located 40 km from the city.

Yekaterinburg’s calling card and favorite spot for weary travelers is Historic Square. This museum and memorial complex, where between 1721-1723 Yekaterinburg’s ironworks, iron-smelting, and copper and mechanical plant were founded, tells the tale of the city’s origins. Back in the 1970s, a “time capsule” for future generations was buried here, and it will be opened in 2023 on the day of the 300th anniversary of the metropolis. The most popular place for mass open-air festivities, meetings, and appointments in the city is the “Little Dam” – the area located around the city dam. It is built of rare Ural larch that hardens in the water and thus becomes stronger. This is the oldest structure of its kind in Russia.

Ural mysteries
There are many mysterious places in Yekaterinburg that haven’t been fully studied even by the townspeople. For example, the Hill of the Ascension has become sacred, as this is where the last Russian tsar was killed. One of Yekaterinburg’s eeriest secrets is connected with secret dungeons, which were built and lived in by the the Rastorguev merchant/Old Believers. The mystery of these mazes had not been disclosed until now, as the dungeon plans did not survive.

Another strange place, popularly known as “Cuba”, is located on a rocky peninsula on Bolshekonny on the Upper-Iset pond. To reach this spot, which is surrounded by water and impassable marsh, one can only go by a single road. People here live in the old wooden barracks, and the main attraction of Cuba is an abandoned power plant, where, according to urban legends, Satan worshippers gather.

The mysterious metropolis continues to be full of surprises for its residents. For example, a few years ago under the main town square (entitled the year of 1905) builders accidentally discovered a mass grave of clergy from the Epiphany Cathedral, which once stood on this spot. On another occasion, teachers and students of one of the city schools in the village of Shirokaya Rechka discovered the foundation of an ancient forge. In addition, ancient dolmens were found not far from Yekaterinburg in the Urals, the secret of which has still gone unsolved.