Walking in the gulag’s shadow: A trip to the arctic city of Vorkuta 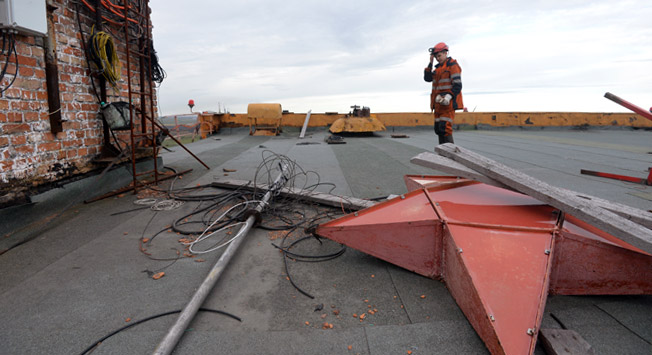 The Russian city of Vorkuta rests just north of the Arctic Circle in the frigid expanses of the Komi Republic . Vorkuta is famous for its vast coal mines that were once home to one of the harshest labor camps in Stalinist Russia. Today, this isolated city in the extreme north of European Russia is one of the best places to learn about this intriguing part of Soviet history.

The Komi Republic is a distant corner of Russia at the northern end of the Ural Mountains that divide Asia and Europe. The Komi people , a nomadic group who have traditionally lived in large leather tents, called chums, and survive by herding reindeer were once the only inhabitants in the region outside Vorkuta. During the tsarist period of 19th century Russia, penal colonies were established throughout the country, including the Komi Republic, where felons and political prisoners were sent to work. The labor camps that first appeared in Russia under the tsars marked the beginning of a system of forced labor that continued throughout the following century.

Russia and Siberia officially became part of the newly-established Soviet Union in 1922. Under the first Soviet leader, Vladimir Lenin, a system of labor camps was created known as the GULAG, the Russian acronym for ‘Main Administration of Corrective Labor Camps.’ The camps were usually built in isolated parts of Siberia and both common criminals and political radicals were sent to labor within them. The coal-mining camps in Vorkuta, located in the Arctic of European Russia, became one of the most feared places that gulag prisoners were sent to work.

The conditions inside the gulag worsened after Lenin died and Joseph Stalin became head of the Soviet Union. In the 1930’s, Stalin attempted to purge the country of anyone disloyal to his leadership by sending millions of Soviet citizens to the gulags. Under Stalin, prisoners in the camps faced workdays that could last up to 14 hours and survived off watery soup and bread. Prisoners who rebelled or tried to escape were shot. Today, it’s estimated that 20 million people died in the gulags.

During the Stalinist purges , coal was discovered in the Komi Republic. In 1932, the first coal mine was built and the town of Vorkuta was established. Vorkuta became an administrative center for other labor camps in the Komi Republic and the settlement grew into one of the world’s only Arctic cities. Known as Vorkutlag during the Soviet era, the extreme winter temperatures and hard work in the coal mines caused hundreds of thousands of prisoners to die in Vorkuta.

The first inmates sent to Vorkuta lived in tents while buildings were constructed. Prisoners were initially tasked with constructing a railroad track leading to Vorkuta and the coal mines. A ring road, known as the Vorkuta Ring, was eventually built to connect the villages and mines that surrounded the city of Vorkuta. The men and women sentenced to labor in Vorkuta were woken at 5am and walked through the frozen winter weather to coal mines where they labored with pickaxes for up to 12 hours. Dead prisoners were buried in cemeteries around the city with little more than a wooden stake to mark their graves. According to many reports, other fallen prisoners were simply left in the snow.

Stalin died in 1953 and Nikita Khrushchev came to power. Khrushchev publicly denounced the brutality of the gulag at the 20th Congress of the Communist Party. Although labor camps continued to function during the remainder of the Soviet Union’s history, Khrushchev ushered in a new stage of Soviet history known as the Khrushchev Thaw. For the first time, prisoners were released from the gulag and life in cities like Vorkuta changed forever.

By 1958, many prisoners in Vorkuta gained freedom as part of the Thaw and returned to their homes. In former labor camps like Vorkuta, the Soviet government began offering higher wages to attract people to work difficult jobs such as coal mining. With no better employment options, some gulag prisoners in Vorkuta chose to stay and continue the mining work. Many prisoners in the camps had started their sentences before the Second World War and they returned home to villages in Ukraine or European Russia only to find their homes destroyed and their family and friends dead. Some of these former prisoners even returned to places like Vorkuta in search of work. Others lacked the energy or money to relocate from Vorkuta and simply built their own houses and stayed.

When Leonid Brezhnev succeeded Khrushchev in 1964, a new era of prosperity began in Vorkuta. Coal miners earned higher wages than elsewhere in the Soviet Union and it’s said that miners could even afford to take beach vacations to the Black Sea coast of Sochi, a luxury at the time. In recent years, coal mining in Vorkuta has begun to dwindle, and most of the towns around the Vorkuta Ring are now abandoned. The mining work hasn’t dried up completely, yet many residents in Vorkuta now talk of leaving.

While many parts of Russia contain the remnants of former gulags, Vorkuta is one of the only places where travelers have the opportunity to meet residents who actually worked in the camps. This far-flung outpost in the Arctic really is a living capsule of Russia’s Soviet past.