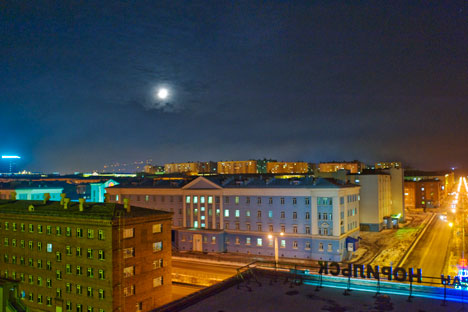 Known for its metallurgy and connection to the Gulag, Norilsk’s history is worth exploring.

During its history, Russia has witnessed the creation of a number of special towns whose existence was considered a state priority. Indeed, the largest such site can be considered St. Petersburg, built by order of Tsar Peter I (the Great) in a remote, sparsely inhabited part of northwestern Russia. But none of these state settlements arose in more difficult conditions than Norilsk, now a city of some 176,000 in the far northern Arctic part of Krasnoyarsk Territory.

Norilsk owes its existence to an unusually rich concentration of valuable mineral elements, most notably nickel. The area's mineral wealth was known to the Russians at least by the early 17th century, when copper smelting was found to have occurred at Mangazeya, Russia's earliest full-fledged Arctic settlement.

Mangazeya was established in the early 1570s on the Taz River, part of a network of waterways that linked into the Arctic Ocean. The area was an entry to the vast fur-rich territory of central and eastern Siberia, but Mangazeya was fated to exist for only a century. Remote even by Russian standards, its location was paradoxically vulnerable to access by foreign vessels. Apparently fearful of unsanctioned trade with English merchants, the early Romanov Tsars Michael and Alexei restricted access by sea as early as the 1620s. In 1672, a decimated Mangazeya was formally abandoned in favor of more accessible southern routes to Siberia.

Scientific exploration of the region resumed at the most unlikely of times - in 1919, as the Russian Civil War was raging. That year, Nikolai Urvantsev (1893-1985), a young geologist in Tomsk, undertook explorations at the base of the Taymyr Peninsula. Urvantsev’s task was to determine the feasibility of coal supplies for Allied transports that would ship arms to the White forces along the Yenisei River.

To get to Norilsk take a regular direct flight from Moscow (Domodedovo or Vnukovo airports). The trip takes 4 hours.

That plan came to naught when the White position in Siberia collapsed, but Urvantsev continued to work in the region until 1926 with the support of the new Soviet regime. He found not only rich coal deposits but also ore containing nickel, copper and platinum, all the area of the Norilskaya River. In 1921, Urvantsev, his wife Elizabeth, and a few colleagues built a log cabin in which they spent the harsh winter near Shmidt Mountain. That cabin survived, and has been reassembled next to the Norilsk Museum as "the first house at Norilsk."

In June 1935, the Soviet Council of Commissars ordered the rapid development of a nickel extraction plant at the base of Shmidt Mountain. As a strategic priority for Soviet heavy industry, the project was placed under the control of the secret police, the NKVD, which created a labor camp complex known as Norillag. The early groups of prisoners were shipped to the small port of Dudinka on the Yenisei River and marched across 50 miles of tundra to the desolate construction site.

Everything had to be built from scratch, including a narrow-gage rail link between Dudinka and the Norilsk camp. Development accelerated in 1938 with the appointment of Avramy Zavenyagin (1901-1956), who was trained in metallurgy, as director of the industrial complex. Between 1939-1941, Zavenyagin brought order to a project hampered by brutal conditions and the most primitive tools. A factor in his success was the creation of relatively protected conditions for prisoners with special technical skills. Indeed, Urvantsev himself was arrested, but managed to survive and resumed expeditionary work in the region after his release in 1945.

By 1939 the Norilsk plant had produced an intermediate product known as matte (a nickel sulfide aggregate), and by mid-1942, Norilsk achieved production of refined nickel through a labor-intensive and noxious reduction process. Production of copper began the following year, but nickel was especially valued for its use in tank armor and airplane construction.

In the late 1940s work began on a geometrical plan for a "new town" near the main factory settlement. Construction, primarily with prison labor, began in 1951 on streets of monumental buildings with designs that resembled the Soviet neoclassicism of Leningrad. Two years later, the Norilsk settlement was granted municipal status – an important step in separating the town from the complex of prison camps and factories.

The death of Stalin on March 5, 1953 brought little change for the majority of political prisoners in Norillag. Resentment at widespread abuses led that summer to a non-violent work stoppage known as the Norilsk uprising, centered primarily in the mining camps but ultimately involving some of the factory camps. The uprising was suppressed with the loss of scores of lives.

The existence of Norillag was formally terminated in the fall of 1956, but the strategic importance of metal extraction ensured that Norilsk and its factories continued to expand. In 1966, new rich ore sources were opened to the northeast of Norilsk at Talnakh, which was developed as a large satellite town for Norilsk.

In the 1970s, work began on the enormous nickel factory at Nadezhda ("Hope") to the west of Norilsk. In 1981 it opened as the largest of the area's industrial enterprises. Near Nadezhda, the Norilsk metropolitan structure also includes Kaieran, the center of coal extraction. Early steps in the creation of a company now known as Norilsk Nickel began in the late 1980s, and large-scale privatization began in 1993.

Information about the region and its history, including the history of the prison camps – is preserved in the Museum of the Norilsk Industrial Region. The museum was established in 1939 as a closed institution and was opened to the public in 1989. In additional to maintaining exhibits on regional culture, the museum has played a leading role in the study and commemoration of the prisoners who endured the labor camps.

In the 1990s, work began on the Norilsk Golgotha memorial complex, devoted to the memory of Norillag victims. The memorial is located on the site of a mass grave at the base of Shmidt Mountain overlooking Norilsk and its factories. Visitors enter the memorial, which includes a chapel and several monuments, through a log gate containing bells that are rung in memory of the dead.

Also in the 1990s, construction began on houses of worship in Norilsk. Near the city center is the Cathedral of the Icon of the Virgin Comfort to all who Grieve, which was consecrated in 2003. The satellite town of Talnakh has a wooden Church of the Trinity, and another log church is currently under construction in Norilsk proper. Norilsk is also graced with the large Nurd-Kamal Mosque, built with private donations in 1993-1998, which holds the title of the “northernmost mosque on earth.”

After a major population decline in the 1990s, contemporary Norilsk has maintained its viability, but it faces a number of challenges, including some of the planet's worst environmental degradation. Measures have been undertaken against industrial pollution, and the impending consolidation of nickel production at the more advanced Nadezhda factory should improve the air quality in Norilsk. But the enormous copper factory remains in the city.

Construction problems continue to occur because of foundation shifts on the permafrost layer that underlies Norilsk. Entire buildings have been abandoned, but new engineering methods have permitted the rehabilitation of existing structures or the construction of new multi-story buildings.

Despite the area's industrial pollution, Norilsk is near one of the great natural wonders of Russia - the Putorana Plateau on the Taymyr Peninsula. The possibilities for eco-tourism exist, but for the present they are limited by restricted access. Travelers still need to request permission to visit the city. The city's primarily link to the world is through the Alykel airport, whose traffic includes several daily flights from Moscow. The approach from the air gives a particularly impressive view of the Yenisei River and the severe beauty of the tundra.