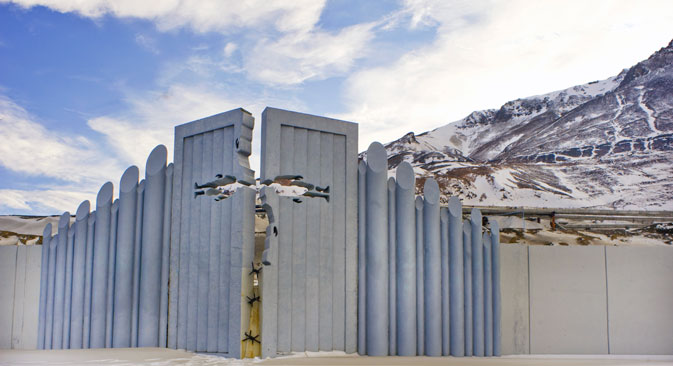 The northern Siberian city of Norilsk has not shied away from its history as the site of a notorious Soviet labor camp.

The origins and development of the city of Norilsk, the northernmost city in Siberia and a major center of heavy metal extraction, depended largely on the forced labor of prisoners in the Norilsk Correctional Labor Camp, which was better known by its acronym, Norillag.

During the more than 20 years of its existence, tens of thousands served as forced labor at Norillag. Precise figures of the human loss are difficult to determine, and research continues. Some records indicate that during the existence of Norillag, over 16,000 prisoners died, almost half during the World War II years, when malnutrition was particularly severe and diseases took a devastating toll.

The city has not shied away from this part of its history, and today a collection of moving memorials stand at the foot of Shmidt Mountain, in an area known as Norilsk’s Golgotha. Many of the prisoners who died at the camp were buried at the base of the mountain in a mass grave, but the dead did not remain buried. During spring thaws, bones would often be washed to the surface by water descending the mountain slopes.

To get to Norilsk take a regular direct flight from Moscow (Domodedovo or Vnukovo airports). The trip takes 4 hours.

The cemetery was closed in 1987, but construction around the site then began, resulting in further desecration. Photographs of remains scraped by bulldozers resulted in a wave of protests. The human rights organization Memorial got involved, and publications on Norillag began to appear in the press. Construction work at the site ceased. In April 1990 a ceremony in memory of the dead was held at the cemetery, and the remains were gathered and reburied.

Later that year, funds were gathered to construct a chapel on the site with the support of the local Orthodox parish. Consecrated in September 1990, the chapel was designed by O. Grokhotov in a form that resembles the small churches of medieval Pskov.

In the summer of 1990, delegations from the Baltic states first visited the site. Through their efforts, separate memorials were created in 1990 in memory of prisoners from Estonia, Latvia and Lithuania. This group of three shrines, marked by Catholic and Protestant crosses, was dedicated in August 1991.

At this time a visiting Catholic priest from Vilnius, Father Alphonse Varenskis, proposed that the site be named Golgotha, thus linking the suffering of the Norillag prisoners with the agony of Christ. This proposal was accepted, and the memorial territory was dedicated in October 1995. These were the first of the memorials to non-Russian victims of the camp; people from at least 23 countries were interned there.

Other memorial initiatives followed in the 1990s. In 1992, a Polish group visited the site and decided to erect a monument to the many Poles who labored and perished at Norillag. Designed by Stanislaw Gerada and dedicated in 1996, the remarkable sculpture resembles a railroad track ascending a pyramid. Above the pyramid the rails continue, but the track ties become crosses tilted in disorder. This stunning display not only symbolizes the many tragic fates, but also refers to the forced construction of railways, one of the most brutal undertakings of the Norilsk project.

The design of an appropriate entry to the Norilsk memorial culminated in 2001 with the dedication of a log gateway designed by Evgeny Solnyshkin in the form of an Orthodox chapel with openings for bells. Visitors who pass through the entrance are able to ring the bells in memory of those buried at the site.

A monument to Jewish prisoners at Norillag arose from a visit in 2001 by James Wolfensohn, then president of the World Bank. His initiative was welcomed by the Norilsk Jewish community, and the monument was dedicated in 2005. Designed by Alexander Sobolev, the sculpture consists of a massive black base from which rises a masonry wall in the form of a book. A fissure in the center ascends to recessed arms in the form of a menorah, symbolizing the embedded spirituality in Jewish endurance.

Other monuments exist on the site, each endowed with deep sentiment. The culminating sculpture is the monumental “Final Gate,” designed by Alexander Sobolev with the support of Mikhail Prokhorov. The reinforced concrete wall, 56 meters in length, is molded to resemble the vertical logs of a Siberian prison.

The center of the sculpted wall is marked by a gate whose opening takes the shape of a cross. This massive construction not only provides a unifying statement, but also protects the site from the perennial threat of thawing water that courses down the slopes of Shmidt Mountain.

Among the many groups involved in creating a memorial to those who suffered and perished at Norillag. a leading role undoubtedly belongs to the Museum of the Norilsk Industrial Region. Established in 1939 as a closed institution, the museum opened to the public in 1989. In addition to exhibits on regional culture and history, the museum includes extensive displays devoted to Norillag and its victims. Under the direction of Svetlana Slesareva, co-author of one of the Golgotha memorials, the museum devotes major resources to the study and commemoration of those whose agony created Norilsk.