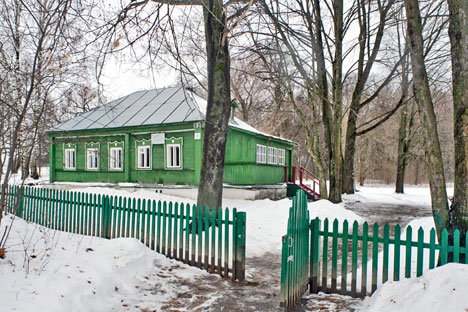 The country home where the writer spent several childhood summers was a place of both joy and sorrow.

The great Russian writers of the 19th century are often associated with their place of origin, with the environment that nurtured their early years. The most famous example is the Tolstoy family estate at Yasnaya Polyana.

There is, however, another site associated with a towering genius of Russian culture: the Dostoevsky family estate at the village of Darovoye, where Fyodor Dostoevsky (1821-1881) spent several childhood summers in the 1830s. Although distinctly modest in comparison with Yasnaya Polyana, Darovoye can lay claim to a profoundly joyous – and equally tragic — role in the formation of the great writer's character and creativity.

Darovoye is located in a bucolic setting about 90 miles southeast of Moscow near the town of Zaraisk in the Kolomna Region. Darovoye and the neighboring village of Monagarovo were among a cluster of outposts that belonged to the prominent Khotyainstev family.

In 1763, Vasily Khotyaintsev erected the brick Church of the Holy Spirit on the Monogarovo estate. With a single cupola and a refectory and bell tower at the west end, the church combines traditional features with neoclassical elements of the early reign of Catherine the Great.

To get to Daroivoye take a regular bus from Moscow (Vykhino bus station) to Zaraysk #330, than take a bus from Zaraysk to Zhuravna #62 and get off in Monogarovo. The trip takes 3 hours.

Vasily Khotyaintsev's grandson, Peter, was the last of the family to own the Darovoye - Monogarovo estate. In 1830, the property came to the attention of Mikhail Andreevich Dostoevsky (1788-1839), a doctor in state service who was engaged in quarantine enforcement during the cholera epidemic that swept through the Moscow region that year. Dostoevsky and his wife Maria wished to acquire a place in the country for the family. The purchase was completed in 1831, and the family spent its first summer in Darovoye that year, when Fyodor was nine years old.

The Dostoevsky family continued to live in an apartment at the Moscow Marinsky Pauper's Hospital, where Mikhail served on the medical staff, but each summer the mother and children resided at Darovoye. In 1832, a fire destroyed much of the village, and the family lived in a very modest structure until their house was rebuilt.

The Darovoe property consisted of over 300 hectares, and Maria Dostoevsky proved an adept manager of the limited resources available to the family. In 1833, Mikhail Dostoevsky acquired the neighboring village of Cheremoshnya, with its 100 peasants (serfs).

Years later, Fyodor Dostoevsky would fondly remember the summers at Darovoye as a time of games with his brothers among the large linden trees and hollows on the estate. This imaginative play was stimulated by a reading of works such as Daniel Defoe’s Robinson Crusoe and the novels of Walter Scott. On warm summer days the children swam in Mama’s Pond, which Maria Dostoevsky had created from a nearby spring.

The surrounding fields also left many memories. During his Siberian exile, Dostoevsky remembered how the peasant Marei gently comforted him from fright at an imagined wolf near Darovoye. This memory of the goodness of the simple Russian people consoled Dostoevsky at a desperate time in his life.

Yet despite his loving memories, Darovoye also had deeply tragic associations for Dostoevsky. In February 1837 his mother Maria died in Moscow from tuberculosis. Her death at the age of 37 was a devastating blow to his father, who retired from service and sent his sons Mikhail and Fyodor to school in St. Petersburg. The rest of the family, including two younger sons and three daughters, moved to Darovoye.

Life on the Darovoye estate soon became very difficult. Grieving for his wife and beset with financial problems, the elder Dostoevsky evidently had increasingly antagonistic relations with the serfs that lived on the estate. Under circumstances that were never clearly ascertained, his body was found on June 6 (old calendar), 1839 along the road to Cheremoshnya.

Mikhail Andreevich Dostoevsky was buried in the cemetery of the Church of the Descent of the Holy Spirit at Monogarovo. The cemetery was vandalized during the Soviet period, and the precise location of his grave has yet to be discovered.

Following Mikhail Dostoevsky’s death, the Darovoye estate was briefly kept in trust for his children and then passed to the third son, Andrei.

Fyodor Dostoevsky sold his share in 1844, and by 1852 his sister Vera Ivanova had purchased all shares of the estate. Under her guidance, the estate gained new buildings for the Ivanov family and their guests. After many delayed plans, Fyodor Dostoevsky finally returned to Darovoye in 1877, four decades after his last childhood visit in the summer of 1836.

Zadonsk: Refuge for the saint who inspired Dostoevsky

Much has been written about the traumatic impact on Dostoevsky of his father’s mysterious death. Yet Dostoevsky would always insist on the blessed nature of childhood memories associated with Darovoye. And the Darovoye area, including Cheremoshnya, would figure in the writer’s later work, particularly in the novel The Brothers Karamazov.

Following the death of Vera Ivanova in 1896, the estate passed into the hands of her daughters, Dostoevsky’s nieces. The only structure to have survived from the 19th century is the so-called “wing” (fligel). Opinion varies as to whether it appeared following the 1832 fire, or whether it was built by the Ivanovs, perhaps as a guest house.

After the Bolshevik revolution one of the Ivanov daughters, Maria Alexandrovna Ivanova, became the dedicated curator of the small “wing,” which served as a village library. But with her death in 1929, all objects associated with the Dostoevsky family were moved to Moscow, and the “wing” became a nursery for the local collective farm.

During the following decades, the fate of Darovoye underwent many turns, and the memorial was at times practically abandoned. Only in 1990 did Darovoye achieve official status as part of the historic museum complex based in the neighboring town of Zaraisk.

Today Darovoye and the adjacent linden grove are carefully maintained with a broad range of public support, including scholars and students from the regional center of Kolomna.

In September 1993 a monument to Fyodor Dostoevsky was unveiled near the linden grove. Created by the sculptor Yury Ivanov, the seated bronze figure of Dostoevsky serves as a gathering point each year for events dedicated to the great writer.

Preservation is also underway at Monogarovo. In August 2005, a stone plaque and wooden cross were dedicated near the Church of the Holy Spirit in commemoration of the burial of Mikhail Dostoevsky at the church cemetery.

Although still open to the elements, the interior of the church has been cleaned and is undergoing a gradual restoration. Careful excavations and study of the church territory take place every summer.

The remains of the writer’s mother Maria Dostoevky now rest in a tomb in the Cathedral of the Decapitation of John the Baptist within the Zaraisk Kremlin. Every summer she would walk with her children from Darovoye to Zaraisk to post letters to her husband, still at work in the Moscow hospital. For Dostoevsky nothing was more sacred than these memories of his parents and of the childhood years that he spent at Darovoye.