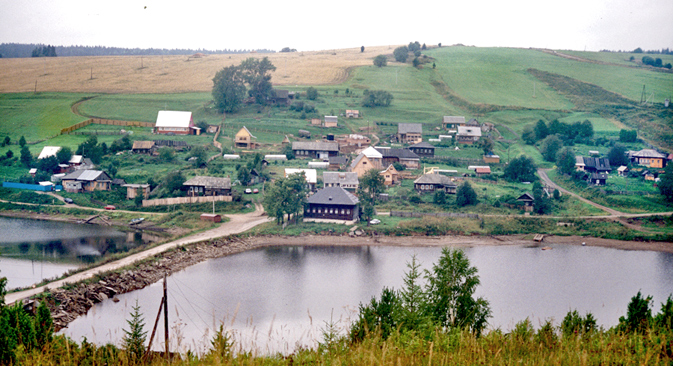 An open-air architecture park outside Perm preserves some of the best examples of the region's traditional wooden architecture.

The art of building in wood is one of the defining elements of traditional Russian culture. Throughout the country’s vast forested zone, different regions shared common principles of construction and decoration, while demonstrating distinctive local traits. Today many of those regions have open-air museums of wooden architecture dedicated to the display not only of architecture but also traditional crafts and folkways.

For the Perm area, the main architectural-ethnographic museum is known as Khokhlovka (pronounced HO-hlovka), named after a picturesque village near the museum on the small Khokhlovka River. Located less than an hour's drive north of Perm, a visit to the Khokhlovka park is a special journey back into the region’s past.

Architectural preservationists and scholars began plans for the park in 1969, and with the approval of the Ministry of Culture in 1971, regional authorities set aside a beautiful hilly site some 40 hectares in size leading down to the west bank of the Kama River Reservoir. The Khokhlovka park opened to the public in 1980.

The entrance to the park is through a turreted log gateway typical of sacred spaces found throughout the Russian North. The spacious natural landscape consists of clusters of log buildings transported from various parts of the Perm region. They include two churches and a bell tower, log houses (two of which have restored interiors), barns, a village fire station, and a windmill with its interior intact.

The two churches – the Church of the Nativity of the Virgin (1694) from the village of Tokhtarevo, and the Church of the Transfiguration (1702-06) from the village of Yanidor – display some of the oldest forms of wooden church architecture. Both adhere to a traditional cuboid design built of pine logs, with a steeply-pitched roof of aspen shingles, an altar contained in an apse on the east end, and a refectory extending from the west side.

The roof design of the Tokhtarevo church from the Suksun region southeast of Perm is particularly appealing, with a rhythm of different angles and shapes from west to east. The adjacent log bell tower, built in 1781 in a monumental octagonal form, was brought from the village of Syra in the same area.

In an unusual decorative flourish, the main cupola of the Transfiguration Church from Yanidor in the Cherdyn region north of Perm rests upon four intersecting barrel gables. As was often the case in severe northern climates, the Church of the Transfiguration was raised on a two-meter base to place it above the snow level. During a restoration undertaken in 1984-1985 by Boris Gnedovsky and Gershen Kantorovich, an elevated porch and gallery were reconstructed on the west and north facades of the church, whose basic structure dates from 1694.

On a nearby rise near both churches is a lookout tower originally from a 17th-century log fort at the village of Torgovishche in the Suksun region. Although the fort was burned during the massive Pugachev Rebellion (1773-1775), the tower survived, only to be destroyed by fire in 1899. Yet the tower had become such a symbol of pride that the local peasants rebuilt it in 1905 with their own resources and in the same form. The tower was brought to Khokhlovka and restored in 1971-1972 as the park's first monument.

Closely related to the churches and towers at Khokhlovka is perhaps the only major wooden monument in the Perm territory that still stands on its original site: the Church of the Icon of the Smolensk Virgin (also known as the Epiphany Church) at Pianteg. Situated on the steep left bank of the Kama River some 40 kilometers southwest of Cherdyn, the church at Pianteg is the oldest surviving log structure in the western Urals, with dates for its construction ranging from the end of the 16th century to 1617.

Among the riddles posed by this archaic structure is the question of its original form. Its unusual hexagonal plan – of which it is the only known surviving example – suggests a possible derivation from hexagonal towers at log forts. Advantageously located at a bend in the Kama, the church perhaps doubled as a watch tower.

Studies of the interior and upper log structure suggest that instead of the current low roof, the original design culminated in a high "tent" roof similar to those above other polygonal log churches from the 16th through the 18th centuries. Despite the building's diminished state, its stout log walls could support the soaring tower forms created by medieval Russian craftsmen.

The log houses at Khokhlovka reflect the modest dimensions typical of the region. One example is the V. I. Igoshev farmstead from the village of Gribany. Situated on the Teles River, Gribany was too small to have its own church, but the fertile river lands provided a reasonably secure existence for peasant farmers in the mid-19th century, when this house was built.

The elongated plan of the Igoshev izba contains two living areas with a vestibule for the elevated entrance in the center. The walls are of notched pine logs with a bottom course of large logs placed on a base of field stone. The tightly insulated plank roof extends well beyond the walls to protect the structure from heavy snowfalls and rainy summers. The windows have wooden shutters. The main element of the brightly furnished interior is the brick stove.

A second izba, from the village of Yashkino in the northern Komi-Permiatsky Region, demonstrates the tight integration of house and barn within the yard. The interior of the house functions as a single space from brick stove to sleeping area.

A unique part of the Khokhlovka display is an ensemble of factory structures brought from the town of Solikamsk, where they were used as recently as the 1950s as part of the Ust-Borovsky salt refinery. By following the path between these massive log buildings (constructed in the 1880s) from wellhead to brine pumping station, to refinery barn to the shipping warehouse on the edge of the river, the entire process is illustrated with the aid of captions and archival photographs. With astute vision, the museum planners understood the historic importance of industrial heritage architecture.

Other functional structures at Khokhlovka include a stout octagonal windmill erected by the prosperous peasant Kuzma Rakhmanov at the village of Shikhiri in the mid-19th century. Its tapering log walls are tightly fitted in a dovetail technique for special stability against the vibrations caused by the massive grindstone assembly, well-preserved on the interior. The top of the mill is in the form of a "cap" that could be shifted for the blades to catch prevailing winds. Wooden poles braced the position from behind.

The log fire station, with its lookout tower, was originally build at the turn of the 20th century at Skobelevka village near Perm. From time immemorial fires have swept through wooden Russia. So severe were the losses in the Perm Region that local administrations undertook the construction of a series of simple fire stations. The interior shows equipment of the period, including portable hand pumps.

Some of the most delightful structures at Khokhlovka are also the smallest – the miniature elevated storage boxes, or caches, used by hunters to protect their bounty from scavengers during long forest hunts.

It should be emphasized that wooden architecture in Russia is not just the product of village life. The historic central district of Perm still contains wooden houses with festive decorative features typical of the late 19th century.

One of the best examples belonged to A. I. Tokareva, whose house consisted of a basic log structure on a masonry foundation. In 1883, she petitioned to rebuild the front part of the house in a highly decorated manner that followed Russian interest in traditional vernacular ("folk") styles in the latter part of the 19th century. With its elaborate carved and milled wood work, the house acquired the name "teremok" ("little tower chambers"), a term applied to similarly decorated structures in the Moscow area. The Tokareva "teremok" was renovated in 1985 for use as a small shop.

Still, the region's richest concentration of the traditional art of building is at Khokhlovka. In comparison with other outdoor museums such as Malye Korely, the Khokhlovka Museum seems austere. Yet that austere beauty, with its Kama River landscape, is deeply characteristic of the Perm lands. A visit to Khokhlovka will provide a humane insight into the folk culture of the northwestern Urals.