Kozelsk: A town resolute in defense of the heartland 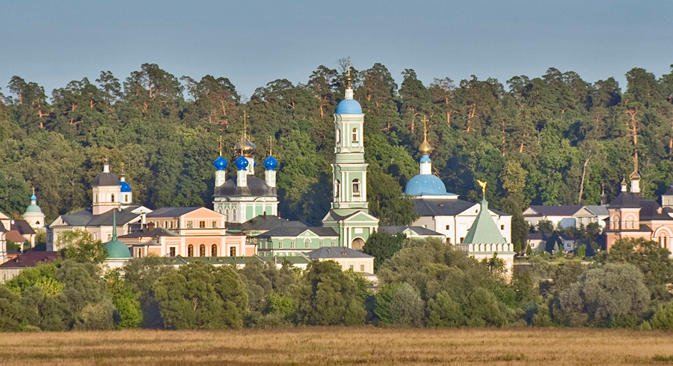 The town of Kozelsk has been on Russia's first lines of defense from the time of the Mongols through World War II.

The town of Kozelsk on the Zhizdra River in the southwestern part of the Kaluga Region would seem the very definition of a provincial backwater. Its population of some 17,000 (and declining) is only slightly more than it was during the late 16th century, when the town served as a fortress defending the southwest border region of the Muscovite state. Yet in certain cataclysmic times, Kozelsk has played an outsized role reflective of Russia’s turbulent fate.

Kozelsk is first mentioned in 1146 in the Novgorod Chronicle, one year earlier than the first reference to Moscow. At that time it was an eastern outpost of the principality of Chernigov, which is now part of Ukraine. During the medieval period, major principalities often divided into smaller fiefdoms. Early 13th century accounts refer to Dmitry, prince of Kozelsk and son of Chernigov Prince Mstislav Svyatoslavich, who perished with his father in battle against a Mongol force at the battle of Kalka in May 1223.

The Kalka battle proved a prelude to a full-scale Mongol invasion of medieval Rus in 1237-1240. Led by Batu Khan (ca. 1207-1255), grandson of Genghis Khan and founder of the Golden Horde, Mongol horse armies captured and sacked Russian towns large and small, including Moscow and Vladimir. After a two-week campaign of destruction against Torzhok in March 1238, Batu arrived at the walls of Kozelsk, where contrary to expectations the Mongols met determined, effective resistence.

Toward the end of a seven-week siege (March 25-May 13), a detachment of a few hundred defenders sallied forth on a flank maneuver against part of the Mongol encampment. The attack inflicted great damage (4,000 Mongol casualties according to a Russian account), but the cost to Kozelsk was also heavy. The group was intercepted and annihilated on the way back to the fortification.

Despite this resistence, in May, Batu sacked the town and killed most of its inhabitants, including 12-year old Prince Vasily, grandson of Mstislav of Chernigov.

Despite its capture, Kozelsk became for Russians a symbol of resolute defiance in the face of superior force. At a time of seemingly unmitigated catastrophe for medieval Rus, Kozelsk stood forth as an example of the will to resist. Medieval chronicles created a legend around the defense, illustrated with colorful manuscript illuminations.

The settlement regained importance as a strongpoint among rapidly changing boundaries in southwestern Russia from the 13th to the 17th centuries. Captured and burned more than once, Kozelsk was controlled by the Grand Duchy of Lithuania between 1446 and 1494, but Moscow regained the territory thereafter.

During the 16th century Kozelsk achieved its apogee as a fortified town. By the beginning of the 17th century Kozelsk had some 15,000 inhabitants, often grouped in precincts with military designations: musketeers, Cossacks, cannoneers.

Yet the early 17th century also brought catastrophe through a dynastic interregnum known as the Time of Troubles. During this time, Kozelsk was controlled by various forces. Weakened by misrule, Kozelsk was sacked by a Polish-Lithuanian force in 1610, resulting in the death of more than half its population. Only in 1638 did Tsar Michael Romanov restore Kozelsk to its position as a fortified town.

With the expansion of Russia’s borders throughout the 17th and 18th centuries, Kozelsk lost its military significance and slipped into obscurity in the shadow of the regional center of Kaluga. In 1776, during the reign of Catherine the Great, Kozelsk was granted a coat of arms comprised of a red background (the color of spilled blood) with four gold crosses (fidelity) and five silver shields with black crosses symbolizing sacrifice in defense of the country. This coat of arms gave eloquent testimony to the reputation of Kozelsk for bravery and endurance.

In 1777, much of Kozelsk was destroyed by fire, after which it gained an organized town plan largely preserved to this day. During the Napoleonic invasion of 1812, the town played its role in supporting the Russian army, particularly during the strategic battle of Maloyaroslavets to the northwest of Kaluga on Oct. 12.

Although built primarily of wood, Kozelsk gained a number of masonry churches in the 18th and 19th centuries. Among them is the Church of St. Nicholas, whose main structure and imposing bell tower were built in the mid 18th century. Unfortunately, the front of this monument is hemmed in by a group of unattractive commercial buildings.

Other notable churches include the Descent of the Holy Spirit (1789) and the Dormition Cathedral, probably built in the late 18th century and rebuilt in the 1820s next to the town park overlooking the Zhizdra. Severely deformed during the Soviet period, the cathedral is being restored with a complete rebuilding of its destroyed bell tower.

Of special artistic interest is the Cathedral of the Annunciation, a modest neoclassical structure begun in 1810 on the north side of Kozelsk. Although vandalized in 1937, the well-restored interior includes preserved frescoes.

The town’s industrial suburb across the Zhizdra River now has an attractive new Church of the Epiphany.

Throughout its turbulent history Kozelsk has witnessed the growth of what would become one of Russia’s most revered monasteries, Optina Pustyn, located in a pine forest near town on the Zhizdra River. A spiritual center during the 19th and early 20th centuries, the monastery experienced its darkest time in the late 1930s, including the fall of 1939 when some 5,000 captured Polish officers were sequestered there in what was called concentration camp Kozelsk-1. In 1940 this group was sent to Katyn (west of Smolensk) and shot in a mass execution.

During World War II, Kozelsk again shared the country’s difficult fate. On Oct. 8, 1941, Kozelsk was captured in the course of Heinz Guderian’s panzer offensive south of Moscow during the German campaign known as Operation Typhoon. The Germans were expelled from the town on Dec. 28 during the Belyov-Kozelsk operation, part of the larger strategic Soviet victory of the Battle of Moscow. Fighting continued in the western Kozelsk region until 1943.

In December 2009, Kozelsk was officially designated a “Town of Military Glory.” In conjunction with this status, a war memorial park was developed in the center with references to the town’s storied military past. Among the monuments is the Chapel of All Russian Saints, flanked by statues of a medieval warrior and a Soviet soldier.

Today Kozelsk continues to be linked to the country’s defense. The Kozelsk region is home to the 28th Guards Division of the Strategic Missile Troops, and much of the town depends economically on this base.

Kozelsk is also sustained by the vibrant restoration of the Optina Pustyn monastery, as well as the nearby Shamordino Convent of St. Ambrose and Our Lady of Kazan. Although a small regional railroad passes through Kozelsk, the town is primarily accessible by car and bus over the excellent road network that covers this rich agricultural land.