Vladimir: A walk among the pearls of ancient Russian architecture 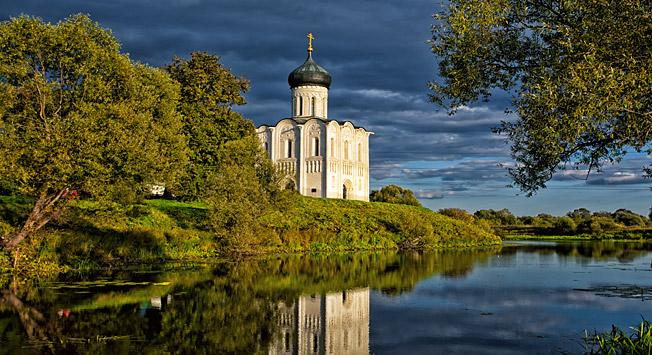 Lori/Legion-Media
Vladimir’s 1000-year-old history is evident on every step throughout the city and is one of the jewels of Russia’s Golden Ring. The highest concentration of 12th-century buildings in all of Russia can be found in Vladimir and the surrounding region. What is especially important is that architectural monuments such as the Golden Gates and other sites included on the UNESCO World Heritage List have been preserved intact. From antiquity until the Middle Ages Vladimir was in constant competition with Moscow: 800 years ago this was the capital of the northeastern part of Russia. Up to the mid-15th century local rulers were crowned as great princes in the local Uspensky (Dormition) Cathedral, which was considered the most important church in Russia.

In the period preceding the Tatar-Mongol invasion a unique Russian architectural style emerged in Vladimir (176 kilometers from Moscow), due to the efforts of several major historical figures such as the outstanding princes Andrei Bogolyubsky (the Pious), Vsevolod the Big Nest and Yuri Dolgoruky. The works of Andrei Rublev, Russia’s most renowned icon-painter still adorn the Uspensky Cathedral. 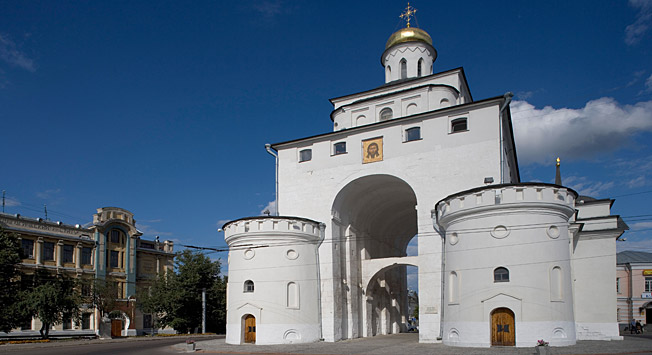 The Golden Gates were built in 1164 under the reign of Prince Andrei Bogolyubsky. The gates were not merely a defense rampart, but an impressive triumphal arch, with the gates of Constantinople as its model. In its first four centuries Vladimir’s great princes would ascend the throne by entering the town through the Golden Gates.

According to legend, on the eve of their unveiling, the Golden Gates crashed down burying 12 people alive. While the trapped people were being searched for, Prince Andrei prayed before a miraculous icon of the Mother of God to save the workers. To everyone’s surprise, the workers were removed from the collapsed ruins not only alive, but even almost without injury. Prince Andrei then ordered the tiny white stone Church of the Deposition of the Virgin's Robe to be built right at the gates. Thanks to this gated church Vladimir’s Golden Gates had no equal in medieval Europe. 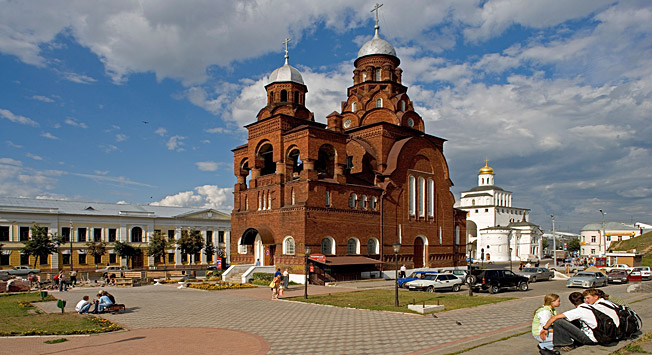 According to another legend, Catherine II’s coach was too wide and got stuck when passing through the Golden Gates. So, the empress ordered the demolition of the vaults on either side. During the Soviet period the Golden Gates hosted the KGB archive and some people even lived here. In 1983, during the city’s birthday celebrations, a capsule with a message to Vladimir’s 21st century inhabitants was embedded in one of the corner towers.

Today this monument of ancient Russian architecture is included on UNESCO’s World Heritage List. On the upper floor of the Golden Gates there is an exhibition with a small collection of weapons from different epochs and a small, but spectacular artistic attraction: A diorama depicting the storming of Vladimir by Mongol troops in 1238. 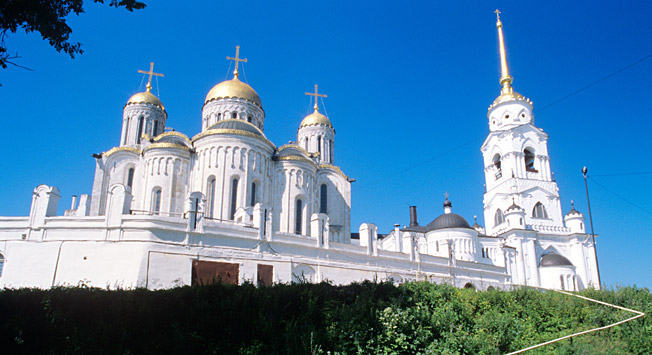 Nowadays this outstanding monument of ancient Rus’ white stone architecture is at the same time both a museum and the functioning cathedral of the Vladimir eparchy. Since 1992 it has been on UNESCO’s World Heritage List.

The Uspensky Cathedral was built in 1158 by Prince Andrei Bogolyubsky (the Pious) and was the main church of the country at the time. The inauguration ceremonies of the great princes of northeastern Rus’ were held here until the mid-15th century and the country’s best craftsmen were invited to Vladimir to participate in its construction.

An icon was brought to Constantinople from Jerusalem in the fifth century under Emperor Theodosius. It was given to Rus’ from Byzantium at the beginning of the 12th century (around 1131) as a present to the saint Prince Mstislav from the Patriarch of Constantinople. Yuri Dolgoruky’s son, Andrei Bogolyubsky, brought the icon to Vladimir in 1155. It was then that it was given its current name and was stored in the Uspensky Cathedral.

The icon is said to have miraculous powers and has been credited with saving Rus’ from various disasters. During Tamerlane’s raid in 1395 the icon was moved to Moscow to protect the city from the invader. The fact that Tamerlane’s troops for no apparent reason withdrew and left the city of Yelets without reaching Moscow was considered the result of an intercession by the Mother of God. 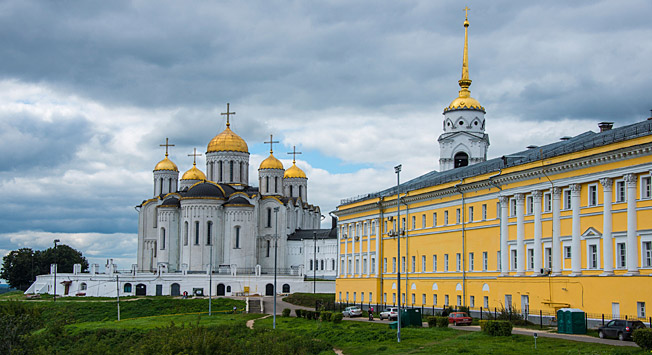 There were three other cases of miraculous liberation from invaders: in 1451 (the raid of the Nogai Tsarevich Mazovsha), in 1480 (the Great Standoff on the Ugra River) and in 1521 (from the Crimean Khan Mekhmet-Girey). Today one of the Russian Orthodox Church’s most venerated icons is kept in the museum and church of St. Nicholas in Tolmachy, next to the Tretyakov Gallery in central Moscow.

The church building has preserved the designs of the pre-Mongol period of Russian architecture almost intact. Particularly worthy of attention are the 12th-century frescoes: the figures of St. Artemy and St. Abraham, the images of lilies and peacocks and the only remaining frescoes that can be safely attributed to the hand of Russia’s most famous icon painter, Andrei Rublev. The baroque iconostasis was implemented by order of Catherine II.

Many representatives of Vladimir’s royal dynasty and clergy are buried in the cathedral’s walls. The cathedral’s builders – Prince Andrei Bogolyubsky and his brother Vsevolod the Big Nest – rest in the northern gallery.

The Cathedral of Saint Demetrius 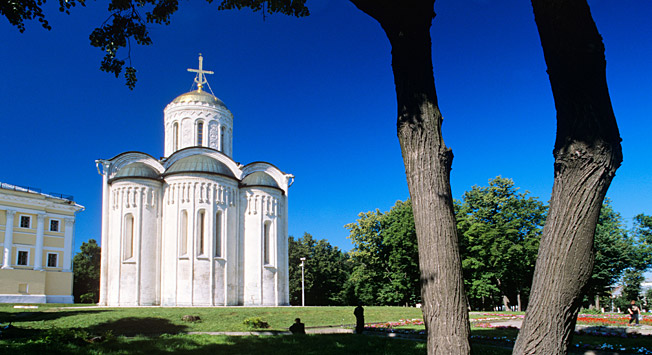 Vladimir’s main symbol, the Cathedral of Saint Demetrius (Dmitrievsky sobor), dates back to the 12th century and is famous for its unique white stone inlay work. The walls are covered with the images of heavenly plants, birds, lions, leopards, griffons with lambs, saints, knights and dragon-people. 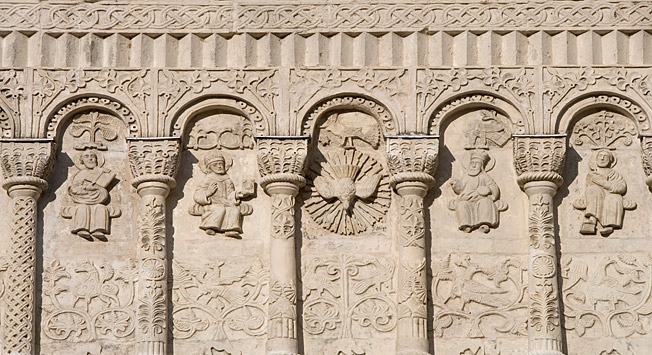 Carved exterior of the Cathedral of Saint Demetrios in Vladimir. Photo credit: Alamy/Legion-Media

Several features are easily recognizable: King David, the ascension of Alexander the Great, Saint George and even several basic Biblical themes. However, to this day not all the mysteries of the Cathedral of Saint Demetrius have been fully solved. 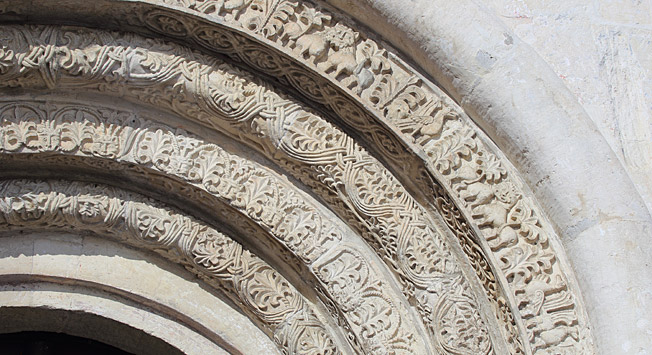 Carved exterior of the Cathedral of Saint Demetrios in Vladimir. Photo credit: Lori/Legion-Media

Few items from the original furnishings have survived. The ones that do remain include several frescoes from the 12th century, in particular the fragments of a composition called “Judgment Day,” which can be compared to the homonymous work by Andrei Rublev in the nearby Uspensky Cathedral. Today the cathedral functions only as a museum and is included on UNESCO’s World Heritage List.

The Convent of the Nativity of the Holy Mother of God 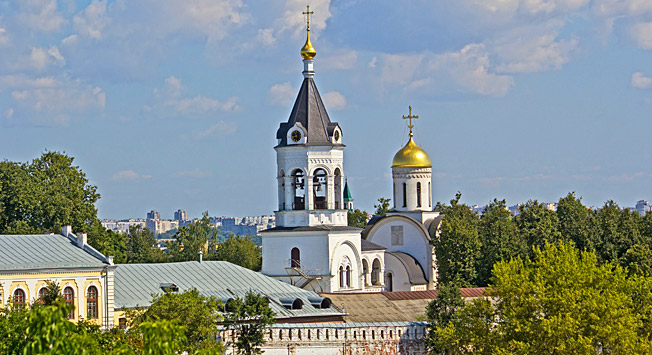 The Convent of the Nativity of the Holy Mother of God is as old as the Cathedral of Saint Demetrius and was built in 1195 using white stone. This male convent is considered one of the most ancient and venerated Russian monasteries. It is located a three-minute walk to the left of the Cathedral of Saint Demetrius if you turn your back to the Klyazma River.

For travelers the most interesting aspect here is not so much the interiors, but more likely the exteriors of the church: we recommend that you walk along all of its grandiose white walls. From there an impressive view onto the Klyazma River and on old Vladimir will open up before your eyes. The Nativity Convent is one of the best places to get a good view of the town.

Just 100 years ago Vladimir’s third white stone church could be found here on the grounds, but in the 19th century it was demolished because of its decrepit state and a new bigger cathedral was built in its place. Being the first center of monastic life in ancient Rus’, the Nativity Convent was also famous as being the burial place of Alexander Nevsky (however, later by order of Peter I, some of his relics were moved to St. Petersburg).

Today this functioning convent represents a complex of outstanding historical importance, despite the losses it has suffered.

The Church of St. George the Victorious 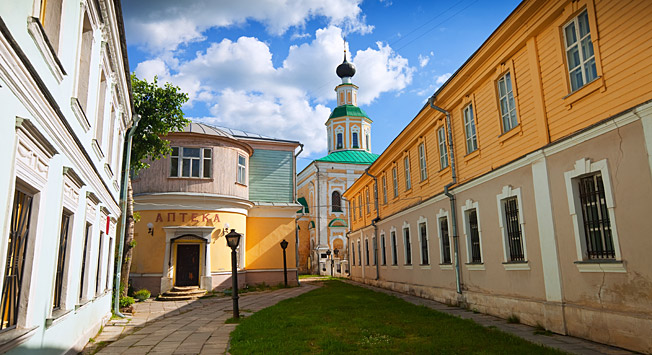 Ever since ancient times Russian princes used to build churches in honor of their own guardian angels. Prince Yuri Dolgoruky, Moscow’s founder, built a wooden church in honor of his own celestial protector – the martyr St. George in 1129. This explains the origins of one of Russia’s most ancient churches.

In 1778 the Church burned down, therefore it was rebuilt from scratch in a provincial baroque style that is a great rarity in this part of Russia. During the Soviet period the church’s small onion-shaped dome was heavily damaged by machine-gun fire. A salami plant, which handled oils and fats, was located here. As a result the ancient frescoes were ruined and covered by a black, one-centimeter thick layer of soot. 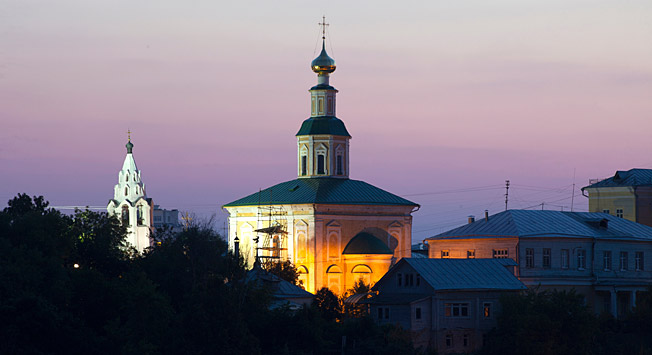 Today the Church of St. George presents a unique possibility to observe the spiritual life of ordinary people from the Russian provinces. The inside offers the characteristic coziness of a provincial church: On the floor is a well-worn carpet and slippers are handed out at the entrance just as you would find in of the vast majority of post-Soviet apartments. Old women wrapped in shawls listen to the priest singing, cross themselves before the wonderful frescoes and admire the 19th-century icons.