Brand new Moscow walks: Around the Kremlin and the Bolshoi Theater 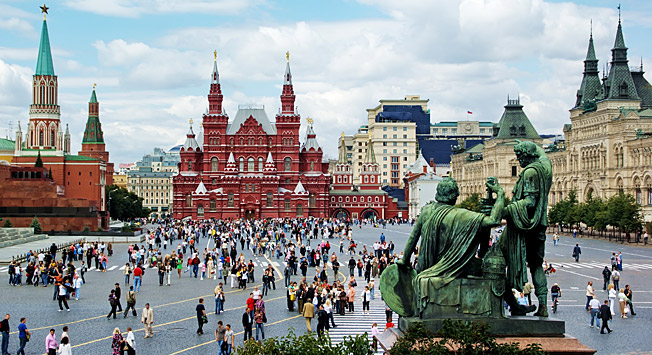 Shutterstock/Legion-Media
Tourists today can walk along these pedestrian streets and enjoy the newly restored facades of buildings from the 16th - 20th centuries: Massive restoration works on these and other Moscow buildings began three years ago.

The first route we published was a walk along the Moscow River embankments. Our second walk is devoted to the unique system of city promenades around the Kremlin and the Bolshoi Theater.

Route 2: along the pedestrian streets from the Okhotnny Ryad to Teatralnaya Metro Station

The length of the route: 3.2 kilometers 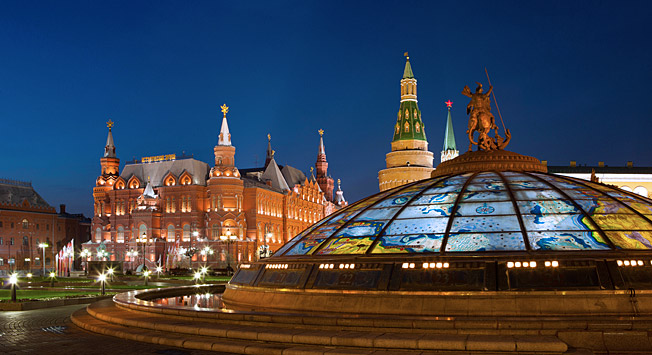 Our walk begins from the metro station Okhotny Ryad. While in the metro look for a sign showing the direction to Manezhnaya Ploshad. From the underground go up to the monument to Georgy Zhukov, the famed World War II Soviet commander. Manezhnaya Square is located in front of Hotel Moscow´s new building and is known for its fountain complex designed by sculptor Zurab Tsereteli. Directly beneath the square is “Okhotny Ryad,” the city’s only underground shopping mall. 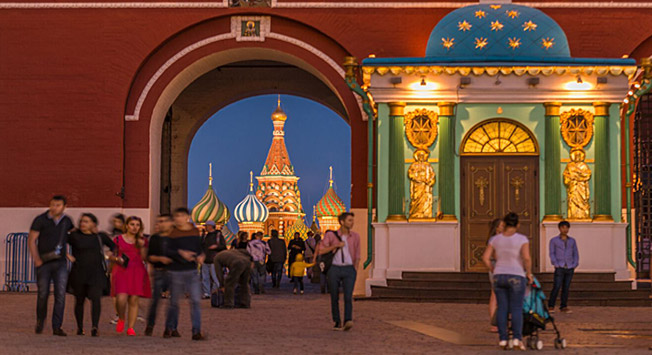 To get from Manezhnaya Square to Red Square you need to walk through the Voskresenskie gates. They were erected here in the 16 th century at approximately the same time that the stone Kremlin was founded here. It may be difficult to believe, but 500 years ago these gates marked the entrance to Moscow, which at that time was equal to one thousandth of the size of the modern city. On the opposite side of Red Square you will see Saint Basil´s Cathedral, one of the most well known Orthodox cathedrals in the world and the most photographed sight in Russia.

Take a walk through GUM 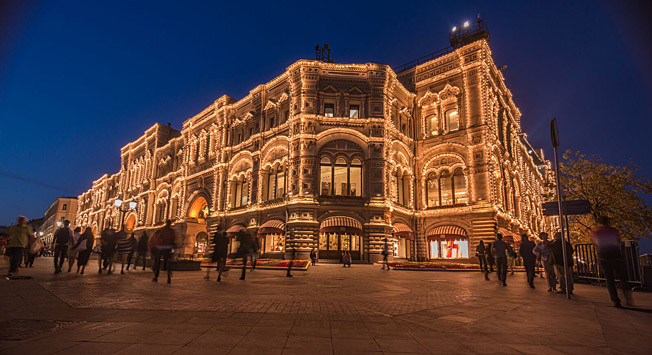 If after the rendezvous with Saint Basil´s Cathedral the seriousness of medieval Russian history is weighing you down, then this is the right time to visit GUM (the Russian abbreviation stands for the Main Department Store). GUM got its name during the Soviet period. During the hard times when there was a deficit of goods, empty shelves and long lines, GUM was the only store in Russia where you could find everything from high quality sausage and veal to fine lady´s stockings. Go through the luxurious department store and exit onto Nikolskaya, the first pedestrian street on our tour. 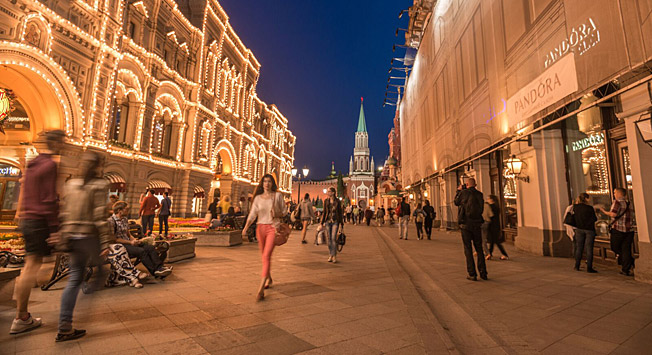 This street became a pedestrian one only in 2013. The city authorities ordered the construction of a cosy European-style promenade with street lamps, benches and flower beds. The reconstruction also included the restoration of building facades from the 17th -19th centuries, an eclectic mixture comparable with the views found on Red Square. 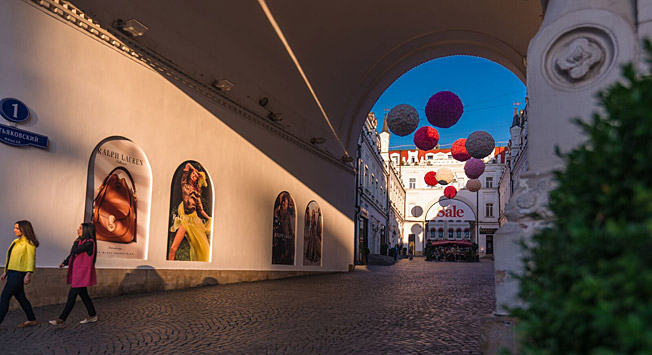 This street begins close to where Nikolskaya ulitsa ends. You will know you have arrived when you see a remarkable three story arch. The road emerged here in the 1870s due to the efforts of the famous art patrons, the Tretyakov brothers, and is the only street in Moscow built using private funds. Perhaps this is the secret to its good looks. 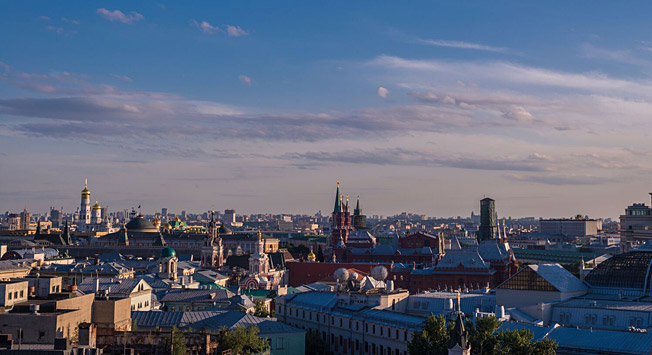 Going through the arch of Tretyakovsky proezd you will exit onto Teatralny proezd, a busy street. Cross here and head up until you reach the building of the former Detsky Mir (Childrens´s World) Department Store, once the main shopping center for children in the Soviet Union. Built in a Stalinist-era architectural style, Detsky Mir was a Soviet analogue to Disneyland and every Soviet child dreamed of making a visit. After a long reconstruction the building was reopened in early 2015. On the top floor of the building there is a viewing platform where you can enjoy a great view of Moscow´s historical center. 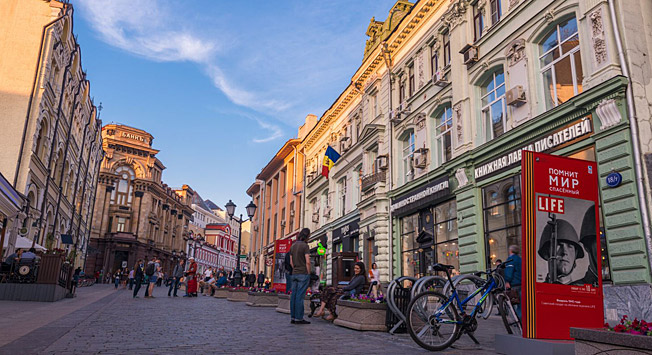 If you walk from Detsky Mir in the direction of the Kuznetsky Most metro station you will find yourself on another pedestrian street, Rozhdestvenka. It crosses Kuznetsky Most, yet another street adapted for pedestrians. Kuznestky Most is one of Moscow´s oldest streets and is named after the bridge that was in use here 400 years ago. The street itself used to be a river, the Neglinnaya, which is today hidden in an underground tunnel flowing under the pavement towards the Bolshoi Theater.

TsUM and the Bolshoi Theater 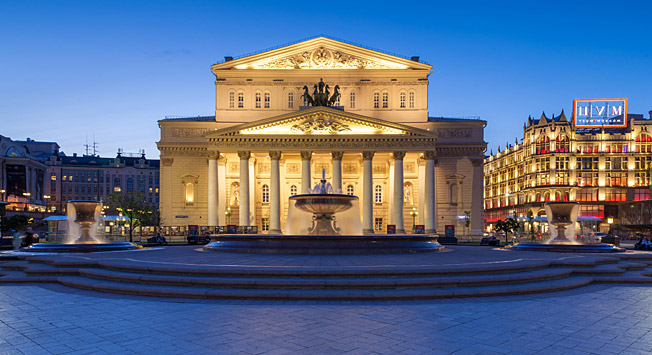 If you go down Kuznetsky Most street you will arrive at TsUM (Central Department Store), another major Soviet-era shopping center. Today TsUM is one of the most luxurious shopping malls in Russia. Behind TsUM along Petrovka ul. is the Bolshoi Theater on Teatralnaya Square. To get a closer look at the famous statue of Apollo on a cart led by four horses you should take a moment to relax on a bench near the fountain.  All lovers of Russian ballet know that the Bolshoi ticket offices close at 8 p.m. 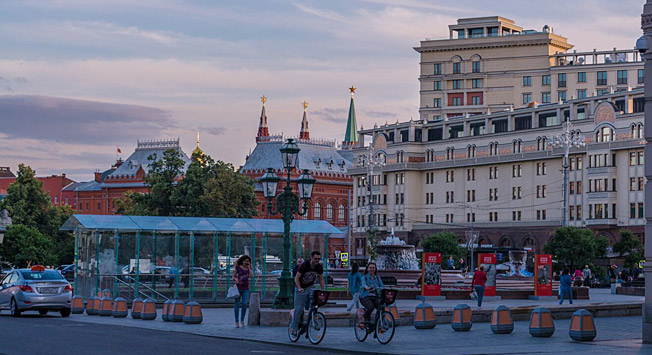 From Teatralnaya Square you can easily get to Teatralnaya Metro Station nearby. But if you have more energy and a desire for a longer walk, we recommend that you go back to Kuznetsky Most and continue walking. This street turns into Kamergersky Pereulok, a pedestrian street that is usually filled with street musicians and has many cafes with outdoor terraces. This lane comes to the famous Tverskaya ul., where you can reach the Okhotny Ryad Metro Station whose western exit is situated up the street. We have returned to our starting point. This should come as no surprise – historically Moscow streets were arranged as circles surrounding the Kremlin.