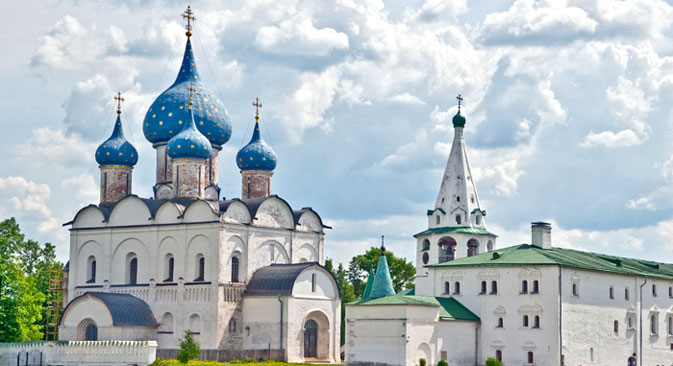 This complex, one of the best collections of early Russian architecture, is an easy trip from Moscow.

Since the 1960s, the central Russian town of Suzdal, with its beautiful location and rich concentration of historic monuments, has been one of the country’s most popular destinations for heritage tourism. At the center of this stunning array is the white stone Cathedral of the Nativity of the Virgin, located on the territory of the town’s ancient fortress, or kremlin. Indeed, the entire history of Suzdal can be seen through the dramatic fate of its Nativity Cathedral.

Although it was eclipsed by other medieval centers, Suzdal was one of the earliest settlements in the Russian heartland. The first mention of the town is in the year 1024, yet there were undoubtedly settlements there in the 9th and 10th centuries. By the early 11th century, Kiev extended its political and religious authority into this agriculturally rich territory, and it soon became an object of dispute among warring princely factions.

By the turn of the 12th century, the Kievan Grand Prince Vladimir Monomakh had created a new kremlin for Suzdal above the small Kamenka River. He also endowed its first Orthodox cathedral, apparently the earliest major brick structure in the entire territory of northeastern Rus.

In the middle of the 12th century, Suzdal was part of the domain of Yury Dolgoruky, the founder of Moscow. Yury made the town the capital of the powerful Rostov-Suzdal principality. Yury’s son and successor, Andrei Bogolyubsky, preferred neighboring Vladimir, but the next ruler – Andrei’s half-brother Vsevolod III – undertook an extensive repair of the Suzdal cathedral in 1194.

This repair proved to be a temporary measure. In 1222, one of Vsevolod's sons, Yury, razed the brick cathedral in Suzdal and erected a magnificent new limestone structure dedicated to the Nativity of the Virgin. The exterior was decorated with the ornamental stone carving that is such a distinctive feature of stone churches built in the Vladimir area at the end of the 12th century. The carved ornamentation includes the columns of the arcade band as well as the lions and female masks (implying the sacred image of the Virgin Mary) that decorate the cathedral at its corners and along its facades.

An unusual feature of the Suzdal cathedral is the rich display of religious images on the surface of the great “golden” doors of the west portal (around 1233), and on a later pair of doors within the south portal (around 1248). The depiction of religious scenes and Orthodox saints in the panels of both portal doors were executed by applying gold foil onto copper plate. Miraculously, these valuable artifacts survived the turbulent events inflicted upon the cathedral.

How to get there: Buses for Suzdal leave every half hour from Moscow's Shchyolkovsky Station. The cost of a ticket is about $5 and the journey takes around 4.5 hours.

During the 1230s, the cathedral interior was painted with frescoes, complemented by icons throughout the space and a few mosaics near the altar. Fragments of the original frescoes were uncovered during a 20th-century restoration of the cathedral by Alexei Varganov.

This monumental stone cathedral withstood the sack of Suzdal by the Mongols in 1238, even though the interior was completely pillaged. Suzdal was again subjected to devastating Mongol raids in 1281 and 1293.

Through decades marked by plague, famine, and invasion, the Suzdal Nativity Cathedral stood until 1445, when a raiding force of Kazan Tatars took the town and set fire to the cathedral interior. This so weakened the roof vaulting that the upper part of the building collapsed.

Not until 1528-1530 did Moscow's Grand Prince Vasily III undertake a reconstruction of the cathedral as part of his campaign to restore the heritage of the Russian lands under the protection of Moscow. During this reconstruction, the remaining stone walls were uniformly lowered to the level of a "blind" (i.e. solid) arcade at the top of the first floor, while the upper structure and the drums beneath the five cupolas were rebuilt of new brick in the style of large Muscovite churches. Fortunately, much of the original 13th-century limestone carving was preserved

The 17th century brought further trials for the Suzdal area. During the Time of Troubles, Suzdal authorities tried to proclaim loyalty to the rapidly changing rulers in Moscow, yet this did not spare the town from marauding bands of Lithuanians who had come to Russia to support the Polish army. Eventually it was a Suzdal nobleman, Prince Dmitry Pozharsky, who raised an army that rid Moscow of the Polish occupiers and created the security necessary for the founding of the new Romanov dynasty.

But even after peace was established in Moscow, Suzdal met with further travail: Crimean Tatars raided the town in 1634, and the black plague struck in the 1650s. Despite these setbacks, Bishop Serapion found sufficient funds to commission a new set of frescoes for the interior of the Nativity Cathedral in the mid 1630s. They have since been frequently repainted, but the basic scheme remains.

In the late 1630s, Serapion also oversaw the construction to the south of the cathedral of an octagonal bell tower that contains the small Church of the Annunciation on its second level. The structure is crowned by a soaring “tent” tower that provides a superb vertical emphasis for the entire kremlin ensemble. The bell tower and its church were expanded at the end of the 17th century by the powerful prelate Metropolitan Hilarion.

The third component of the cathedral ensemble, the Archbishop’s Residence, also took its final shape in the late 17th century under the direction of Hilarion. The oldest section, near the cathedral, is formed by the walls of the 15th-century bishop’s residence. In the 16th century, a refectory was constructed together with the Church of the Presentation, built in 1559. Hilarion expanded these various structures and incorporated them into the expansive edifice of the Archbishop’s Residence. On the interior, the most imposing space is the Cross Chamber, restored in the late 1960s. During the same period, the interior of the Nativity Cathedral gained its imposing 6-tier icon screen.

Damaged by a major fire that swept through Suzdal in 1719, the upper part of the Nativity Cathedral underwent substantial repairs. Further changes were implemented in 1748, when the five cupolas gained their flaring onion shape, and a sloped roof was placed over the rounded gables. The cathedral remained in this form until the 1950s, when a capital restoration brought back the curved roof line of the 16th century while retaining the 18th-century onion domes.

On the periphery of the cathedral ensemble stand a few small parish churches that are also part of the Suzdal Kremlin Museum. Among them is the Church of the Dormition (late 17th century), whose bright red walls adorn the path to the Nativity Cathedral from the east. Overlooking the Kamenka River near the southeast corner of the earthen kremlin ramparts are the Church of St. Nicholas (1730s, with a tall bell tower) and the Church of the Nativity of Christ (1771).

For many visitors, the most appealing structure of the Kremlin Museum complex is the small wooden Church of St. Nicholas, built in 1766 at the village of Glotovo near Yurev-Polsky. In the 1960s the log church, with its elevated gallery, was moved to Suzdal as the first display in what would become a renowned museum of wooden architecture. The main part of this museum, located across the Kamenka River, is a delightful stroll from Suzdal’s grand cathedral.