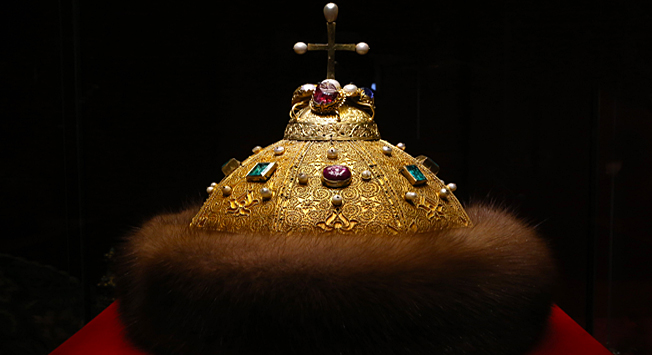 TASS/Viacheslav Prokofiev
The museums of the Kremlin hold millions of items in their archives and thousands of exhibits in their expositions. RBTH chose the main artifacts you have to see no matter the cost. 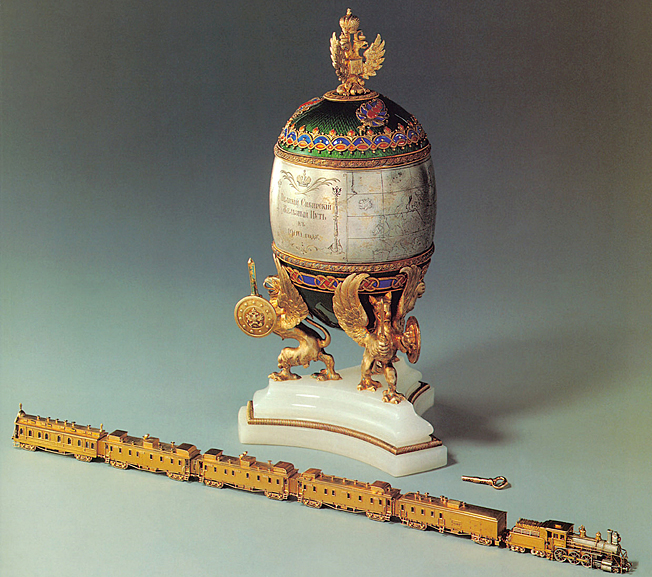 This item has a special place in the legendary collection of Easter masterpieces: There is a mechanical surprise inside, a locomotive that can be removed and wound up with a tiny golden key. A mechanism in the locomotive is two centimeters small, but it sets the machine in motion with a ruby lamp and diamond headlights. There are tiny engravings on the cars, including “Direct Siberian connection,” “Ladies car,” “Smoking car” and “Non-smoking car.” The last car is a chapel. This egg, made of platina with rubies and diamonds, was a gift of the last Russian tsar Nicholas II to his wife, the empress Alexandra Fyodorovna. 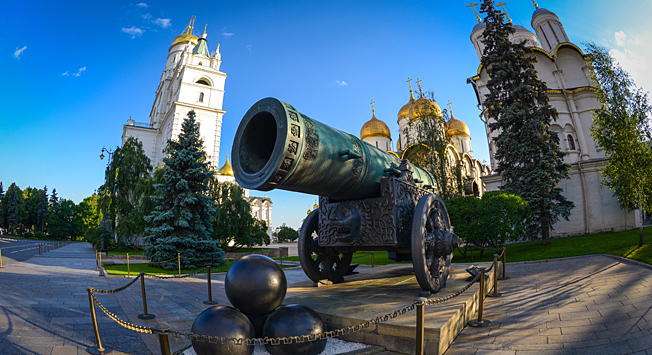 One of the most outstanding works of Russian weaponry art is made from bronze weights of about 40 tons and could handle the shells of up to an 890 mm caliber. The Tsar Cannon was manufactured by order of Tsar Fyodor Ivanovich in 1586 by the court caster Andrei Chokhov at the Moscow cannon yard. The cannon was never used in a battle, although it can fire grapeshot. The core of the cannon is decorated with decorative friezes, ornamental stripes and a horseman figure of Tsar Fyodor Ivanovich. 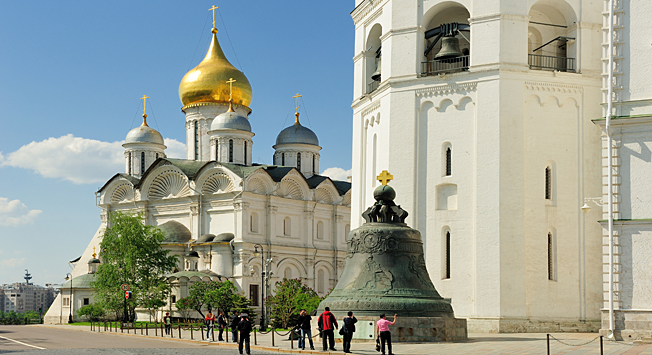 The casting of Russia’s largest bell – which weighs 200 tons – took about a year and was finished on November 25, 1735. It was installed in the belfry right away as its reliefs needed to be finished. Two years later during a fire in the Kremlin, the bell, after having water thrown on the blaze, cooled down unevenly and cracked. The piece that cracked and came off the bell can be found alongside it today; it weighs 11.5 tons. 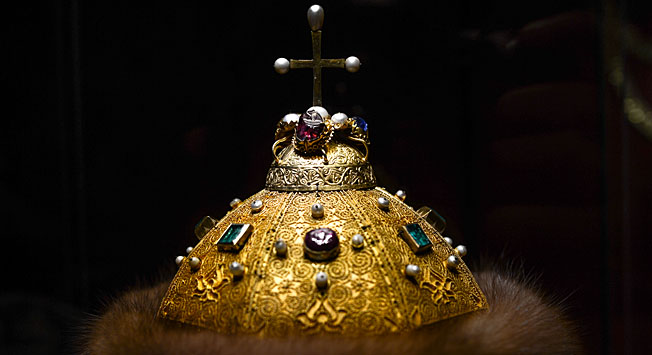 This is one of the most ancient artifacts of the collection of state regalia, which some say was made by the Golden Horde (part of the Mongol Empire) in the 14th century. The name of this tsar's crown comes from a Russian legend according to which it came to Rus as a gift to its rulers by the Byzantine emperor Konstantin Monomakh during antiquity, however, this link has not been proven. From the end of the 15th century until the 17th century it embodied the main symbol of power in Rus and was used in coronation ceremonies. The list of “ingredients” of the hat includes gold, silver, gems, pearls, coinage, fur, and enamel. 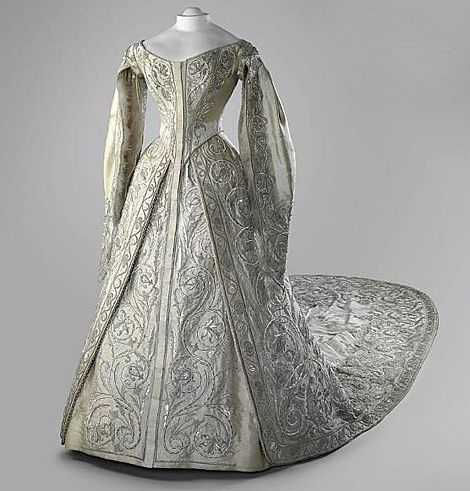 Established in the so-called “Russian” style made of smooth silver brocade and decorated with silver thread and an embroidery of pearls, this dress was produced by the firm of Olga Bulbenkova, the official supplier of the court. A drawing for the embroidery was ordered from several famous artists, including the brilliant Mikhail Vrubel, yet the empress chose a drawing made by one of her maids of honor. It took one full year to make this dress. The weight of the piece on display is 10 kilograms. The accompanying robe that originally went with the dress weighed another 13 kilograms. 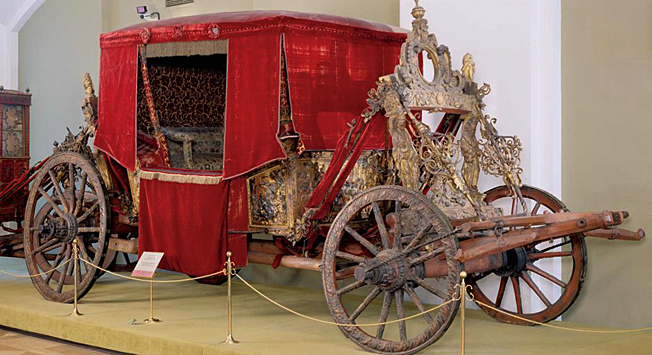 This is the only cart of this type anywhere in the world that has survived until the present day. It was given to the Russia Tsar Boris Godunov by the King of England Jacob I in 1603. The carriage is embellished by wooden carvings and sculptures presenting hunting scenes, as well as images of a battle between Christians and Muslims. To direct this cart a coachman had to either walk along its side or ride one of the leading horses. 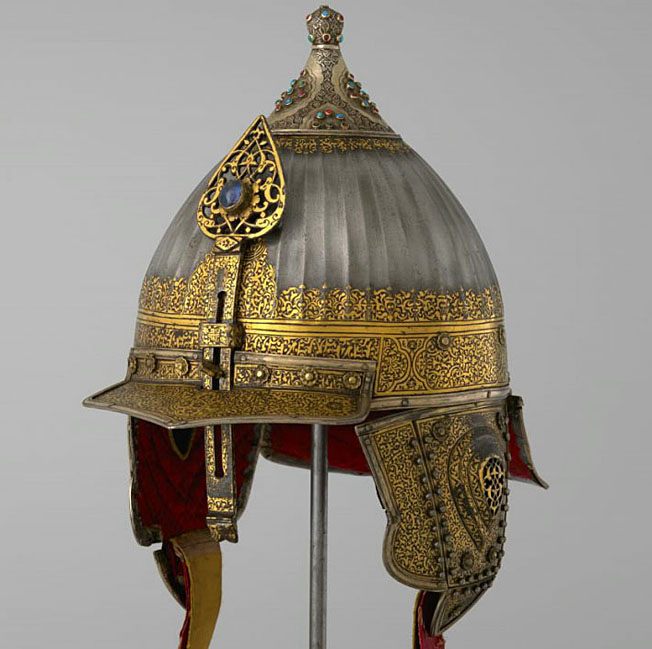 This tsarist ceremonial helmet was made in 1621 in the workshops of the Kremlin by craftsman Nikita Davydov. Davydov used gold and Damascus steel and decorated the helmet with gems and pearls. This “hat” was made as a kind of tsar's battle headwear, as evidenced by the crown grooved in gold on the tip of the helmet. 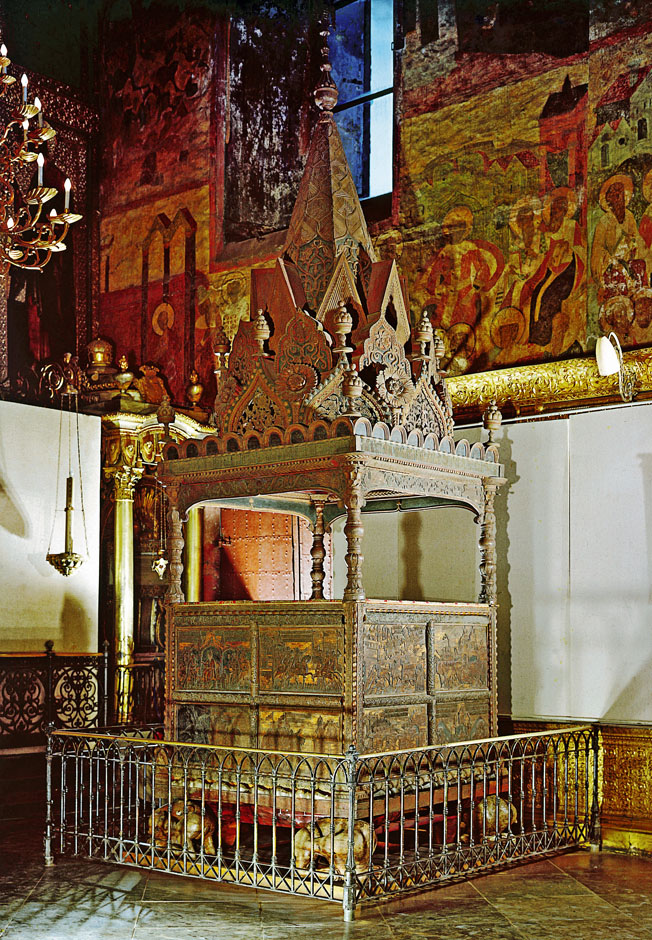 This seat was installed on September 1, 1551 in the Dormition Cathedral for Tsar Ivan the Terrible, and there it stands today. According to historians, the reliefs of the throne depict the central political doctrine of the first Russian tsar about the divine nature and legal inherited succession of the tsar's rule and the title of Roman and Byzantine emperors through the feudal lords of Kiev and Vladimir. It is thought that the skillful carvings here were made by craftsmen from Novgorod. 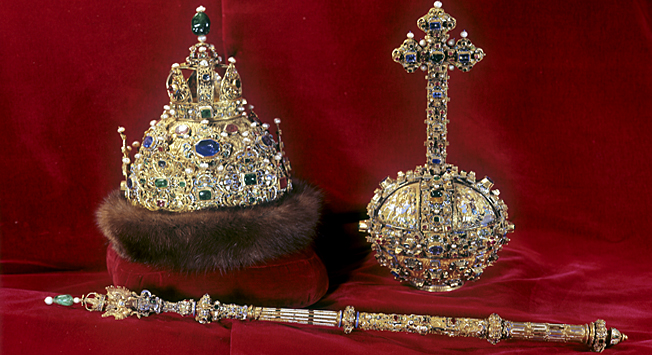 These masterpieces from the epoch of the late Renaissance were created by European jewelers from gold and gems in the late 16th and early 17th centuries. They are decorated with colored enamels and the scepter demonstrates the scenes from the life of King David of Israel. 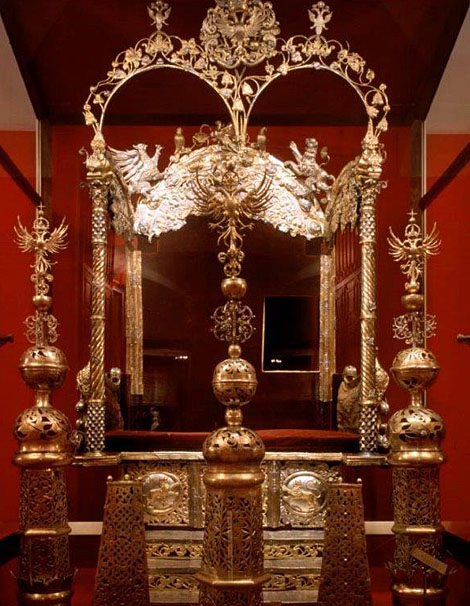 In 1682 two tsars, 15-year-old Ivan V and 11-year-old Peter I, were crowned at the same time. As the elder brother was not known for his intelligence or good health, and the younger brother was too young to yet manage state affairs, their elder sister, Princess Sofia, managed affairs until Peter reached an acceptable age.

For these joint tsars, the craftsmen of the Kremlin manufactured this unusual throne from 1682-1684 with corresponding symbols of power – two-headed eagles, lions, unicorns and crowns. The throne has a third secret seat behind the back of the right bench – it was made for the counselors that helped these young men conduct negotiations.