Sevastopol: A historical resort on a Black Sea naval base 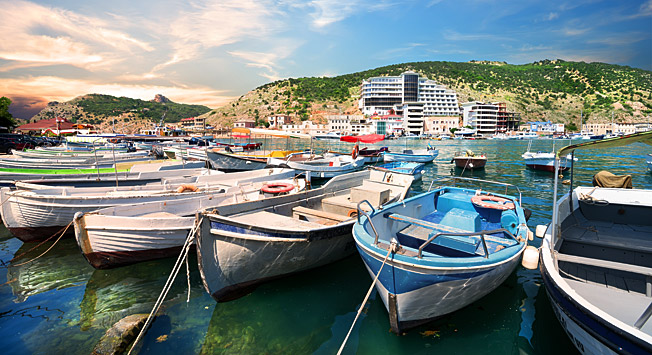 Shutterstock/Legion-Media
Of course, here too you can go kayaking, play with dolphins and get a tan on the beach. But this contrasting mix of a strong military legacy with the heritage of antiquity and Soviet times creates a unique atmosphere.

In the course of its history Sevastopol has survived the four empires of which it was a possession: the Roman, the Byzantine, the Ottoman and the Tsarist ones. But the city has always enjoyed a special status. In 2014 Sevastopol once again became the possession of the Russian Federation, a transfer that Ukraine and some other countries do not recognize. It is now the subject of the Russian federal structure with the status of a city of federal importance.

Despite these disagreements the city is safe and open to visitors from any country with a Russian visa. The simplest way to get there is to fly from Moscow to Simferopol and then cover the 70 kilometers to Sevastopol by taxi. An important thing to note is that it’s better to change your in rubles in advance in Moscow and take enough cash with you for your entire trip, because credit cards are not widely accepted in Sevastopol or Crimea due to the sanctions imposed on the peninsula. Sevastopol’s inhabitants are kind and hospitable towards tourists, but few of them speak any foreign languages, therefore a good command of Russian would be useful here.

A quarter of the 1,000 square kilometers of Sevastopol’s impressive territory (1,273 kilometers from Moscow), which includes fortresses, the Inkerman cave monasteries, the beginning of the Crimean Mountains’ ridge and natural reserves, is occupied by the sea: therefore, these sights are the most impressive ones and will help visitors in getting to know the city. 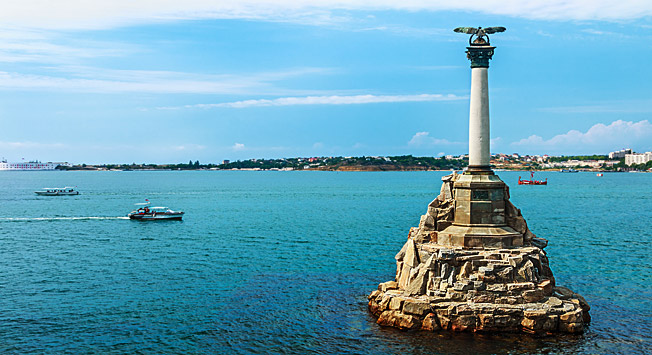 Photo credit: Shutterstock/Legion-Media
Sevastopol’s most important sight is located next to Primorsky Boulevard, not far from the main embankment. It is the Monument to Sunken Ships, the local equivalent of the Big Ben or the Eiffel Tower. It is the favorite place for both locals and tourists and looks equally wonderful from the sea and the mainland.

During the Crimean War (1853-1856) the commanders of the Russian fleet were forced, in order to help the coastal batteries across the fairway, to sink dozens of old sailing ships to the bottom of the sea. The order issued by Admiral Kornilov on September 11, 1854, read: “It is sad to destroy one’s work. Many efforts were made by us to keep these ships, now doomed to be sacrificed, in an enviable condition, but we must surrender to necessity. Moscow burned, but Rus did not succumb because of this…” The monument was installed 50 years later in 1905 for the anniversary of the first heroic defense of Sevastopol. 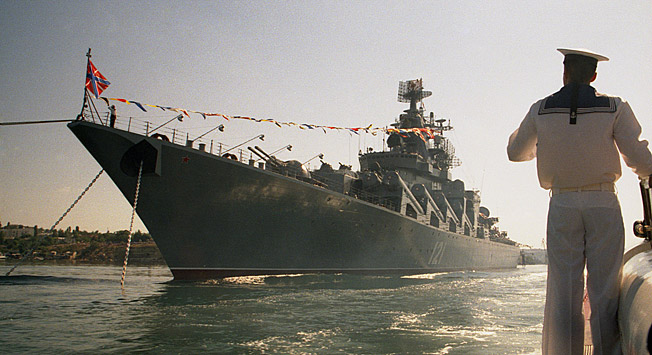 Photo credit: TASS/Alexei Pavlishak
There is a legend surrounding one ship, “Three Saints,” which Kornilov’s men couldn’t sink despite actively firing on it. The sailors remembered that the ship contained an icon. They went back to the ship, removed the icon and the ship sank to the bottom of the sea.

For 11 months, despite its weak defenses, the city repeatedly paralyzed the enemy’s prevailing forces. The heroism of the soldiers defending it won them the respect even of the newspapers of the countries that were attempting to destroy Sevastopol’s impregnable bastions (Great Britain in particular). The 349-day long defense of Sevastopol garnered the city and its defenders fame throughout the world.

A small corner of harmony in Sevastopol 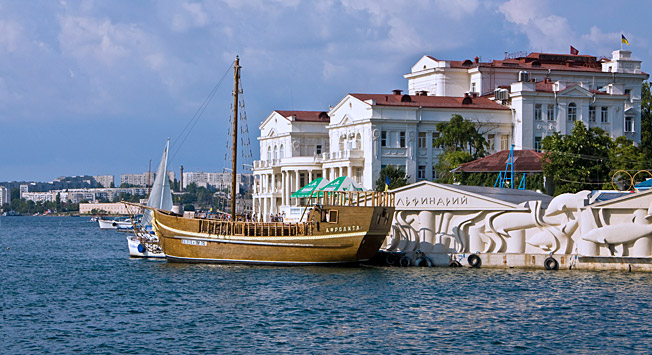 The second main sight along the sea is also located in the center. Not far from the Monument to Sunken Ships in Artillery Bay is Sevastopol’s Dolphinarium. In its 15 years of existence it has worked to set up special conditions not only for people to be entertained by Black Sea’s dolphins and swim with them, but also to raise and rehabilitate them. 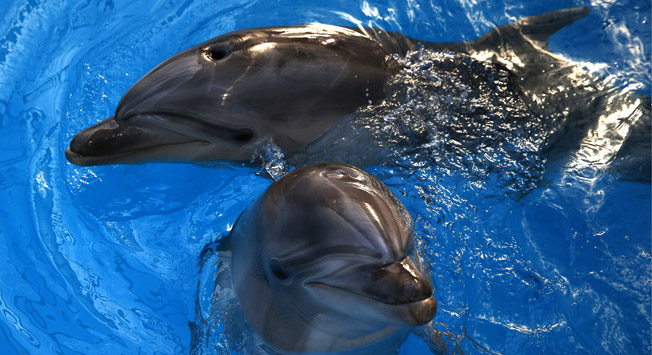 If you look at Artillery Bay from a high vantage point, you’ll be able to see a light blue islet standing out: that’s the Dolphinarium. Its water is kept in such a way as to meet the international standards for housing sea animals.

Apart from bottlenose-dolphins and white whales, seals also take part in performances here. There is also an exhibition of big parrots: the ara, the cacadu, the jaco and other tropical birds feel perfectly at ease next to the sea animals and have even succeeded in learning to imitate the dolphins’ whistle and clicks.

This is not the only place in town that is famous for dolphins. In a second local dolphinarium in Cossack Bay, there are no entertaining performances with sea animals, only therapy for medical purposes. But three years ago special military dolphin trainings took place here. It is one of only two such training centers in the whole world: the other one is in San Diego (USA).

The Balaclava underground submarine base 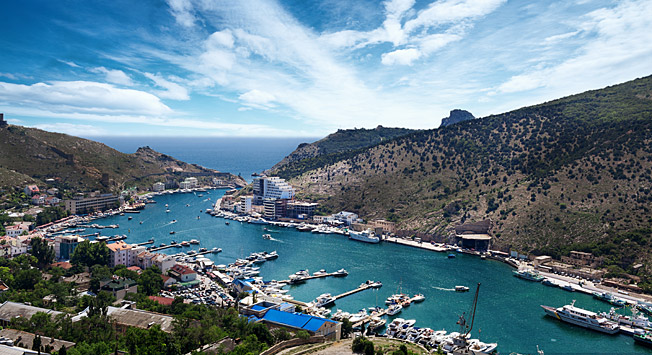 Photo credit: Lori/Legion-Media
In Sevastopol’s Balaclava Bay, a highly secret workshop where submarines used to be repaired is open to the public. This strategic place with grandiose dimensions has no analogue in the world: the uniqueness of the bay allowed the military to hide an underground area of anti-atomic stability inside a mountain: the premises can withstand the explosion of an atomic bomb stronger than the one dropped at Hiroshima and maintain its vital functions for 30 days. In its secret galleries there are communication hubs, fuel and weapon depositories and food warehouses. The base could give shelter to seven medium-size or nine small-size submarines and host up to 3,000 people.

The decision to set up this base in Balaclava, which could protect equipment and people in the case of an atomic attack, was taken by the Soviet government after the atomic bombardment of Japanese cities in August 1945. An evaluation of the consequences of atomic explosions followed and a complex plan was approved for the defense of the main industrial and military facilities of the country against atomic attack. Non-stop construction of the base continued around the clock for nine years. The building plan was revealed to workers gradually and when the construction work was completed all related documentation was confiscated.

However, in spite of its uniqueness and strength, the underground workshop in Balaclava began to lose its strategic importance with time. This was connected with the Soviet Navy moving on to submarines of other classes, which were more complex to service and had bigger overall dimensions. That’s why the factory ceased operations in 1993 and in 1995 the last submarine was launched. The base ceased to exist and was left to ruin. By order of the President of Ukraine connected with the demilitarization of Balaclava Bay, the Minister of Defense of Ukraine in 2002 made the decision to set up the complex of the Balaclava Naval Museum, which opened a year later.

Today tourists cross the underground fairway by boat. Water excursions through the submarine tunnel last 30-40 minutes. English language excursions are available, but should be booked in advance via e-mail vmmu.sev@gmail.com or vimfs@mail.ru. 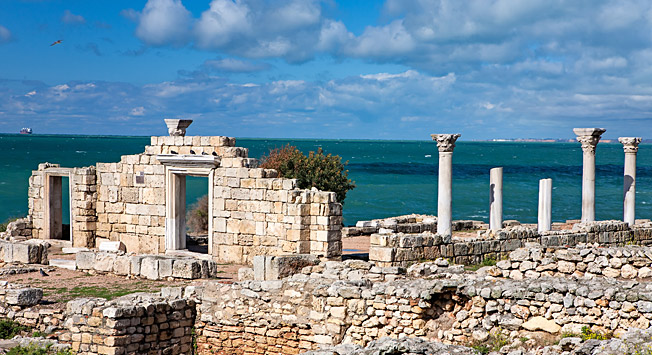 The ruins of the ancient Greek city of Chersonesus, still beautiful 2,000 years after its founding, are included on UNESCO’s World Heritage List and located on a beach west of Sevastopol.

Located at the crossroads of the military and political interests of the Khazar Khanate, Kievan Rus, the Greeks, the Turks and the Genoese merchants, the city-state of Chersonesus remained densely populated and famous for its port until its final days in the 15th century. Even now its high walls stand out along the whole width of the peninsula, from one coast to the other. The defense tower of Zenon, made of huge cut stones, has been preserved and so has an ancient theater that could host up to 3,000 spectators for drama performances and gladiator fights. Also surviving is the main city square, the agora , where there was an architectural complex of seven temples. In the mid-19th century a church was built on the square and named after the Kievan prince Vladimir, who was baptized in Chersonesus in 988. 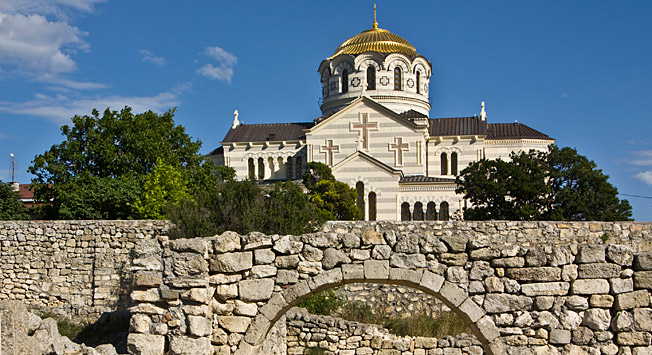 Photo credit: TASS/Irina Afonskaya
Today Chersonesus is a historical monument, an important scientific and research center and a base where archaeologists and scholars from all over the world work and where university students get some practice under their belts. Systematic excavations have helped to reestablish the history of Chersonesus and the most important findings here have made their way to the collections of the Hermitage in St. Petersburg, the State Historical Museum in Moscow and the Pushkin State Museum of Fine Arts, also located in Moscow.

The only tour company for foreign visitors operating in Crimea at the moment is Southern Comfort. The company employs tour guides that speak English, French, German, Italian, Spanish, Chinese, Japanese as well as other languages, and managers that can organize gastronomic, environmental and wine tours. They can also develop tailor-made routes based on a client’s wishes.