Top 12 places to see the sea in and around St. Petersburg 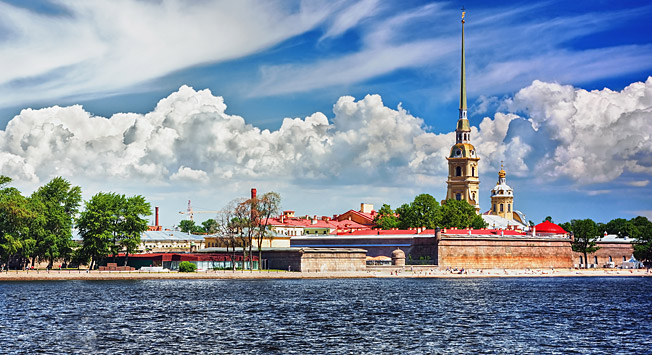 Shutterstock/Legion-Media
There are many places in and around St. Petersburg to dip your toe in the water. The northern capital’s long winters make the accessibility of water in the summer a great part of its mid-year charm.

The following are good places to take in the “water” (full disclosure: rivers and lakes have also made this list). By no means is this a complete list of the offerings near St. Petersburg, but it could provide an ambitious roadmap for a summer well spent. The first six are located in the Resort District (Kurortny Raion) in the northwestern part of St. Petersburg, while the latter six are scattered in and around the city.

The sandy beach at Tarkhovka is not on most people’s radars, but it is open to the public and provides a great view of the fortress at Kronstadt across the Finnish Gulf. This first “water” stop into the Resort District is just a short ride by car, bus or an “eletrichka” train from Finlyandsky train station (a good option on summer weekends due to traffic). There is water access on both sides, as Sestroretsky Razliv Lake lies just inland from the train tracks and Primorskoe highway.

Featuring some of the most popular beaches in St. Petersburg, there are also numerous hotels, bars, restaurants, health spas and sanitoriums, with the oldest – the Sestroretsky Resort – dating back to 1898. You can access the water from Dubki Park in the center of town and from there the coastline of the Finnish Gulf extends north. If you walk far enough you will hit “Dyuny” (Dunes) a popular nude beach.

Laskovy beach is another gem of St. Petersburg ’s coastline and is packed with sunbathers on hot summer days. But it is also popular as a picnic spot in the off-season. Much of the rest of the coastline here is fairly rocky (especially after storms throw stones around), although equally beautiful. Like many settlements along the coast here, Solnechoe is growing fast, with its population increasing nearly 50 percent since 2002.

Besides hosting the museum complex to the great Russian painter Ilya Repin, Repino also features a popular beach, several restaurants and 14 spas, resorts and sanatoriums. Take in the museum, have a meal and go for a swim.

Komarovo’s relaxed atmosphere, forests and ample beachfronts have attracted city dwellers for generations. There are a few restaurants that operate on the beach in summer, although Komarovo is far enough away from the city to deter some day-trippers compared to the closer options.

Zelenogorsk is the last major settlement within St. Petersburg city limits and a stop on the St. Petersburg-Vyborg railroad 50 kilometers from the city center. This has been a popular summer destination since at least 1870 and sunbathers flock to “Zolotoi plyazh” (golden beach) every year to dip their feet into the cool waters of the Finnish Gulf. A popular yacht club is located here, which also moors smaller vessels at its docks.

Kronstadt is actually a city and naval fortress on an island called Kotlin. Famous for being the site of an anti-Bolshevik rebellion in 1921, today this pleasant town offers several great spots to take in a sea view, with the south side flanked by three harbors. Be sure to check out the Naval Cathedral and the Damba, an enormous 25-kilometer dam complex that spans the Finnish Gulf and protects St. Petersburg from flooding. It cuts through the island offering some great views.

The most popular beach in the city center, people flock here any day of the year that there is sun. Located on the Neva River side of the fortress, in the summer it is packed, not surprising considering how small the beach actually is. For me summer in St. Petersburg and a trip to the beach here to gaze out at the grandeur of the city are inseparable associations.

Another good option within the heart of the city, this is one of St. Petersburg’s most tranquil districts on weekdays when there are few tourists. Its long coastline is situated between several tributaries of the Neva River and provides ample space for taking in a sunset or having a picnic.

Park dedicated to the 300 Years of St. Petersburg

St. Petersburg’s youngest park was built to commemorate the 300th anniversary of the city’s founding. It is probably also the busiest place to take in a sea view as the territory is covered by fountains, statues, 300 crabapple trees (a gift from the city of Helsinki), a lighthouse, a wave pool and even hosts a diving school.

The site of some of St. Petersburg’s main customs buildings, for some this may represent an unlikely choice. However, if you walk around long enough you can find a relatively private corner for a picnic. Located near the city center this island is a bit rough around the edges with no infrastructure for tourists, however, it offers great views of the Finnish Gulf and the boat traffic coming into the harbor.

This is a bonus option for those that have knocked the other 11 of off your list. About 80 minutes by train from St. Petersburg, this lake is Europe’s largest. The “Road of Life” began here, bringing 360,000 tons of supplies to the besieged residents of Leningrad during the Blockade from 1941-1944. Today there is a museum  and the lake is a popular spot for boating and hiking. Also here is a 70-meter tall lighthouse, which provides great views of the mirages that occasionally cover the water’s surface.