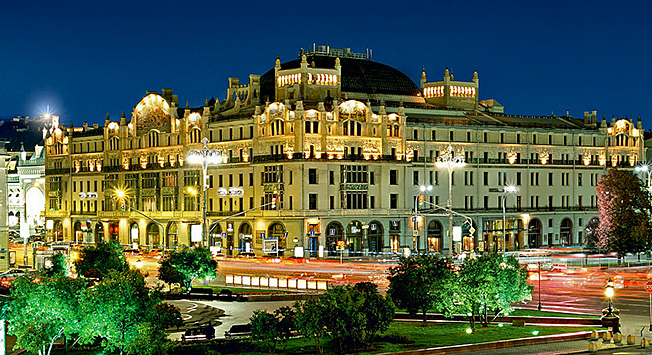 Metropol hotel press photo
At different times Mao Zedong, Bernard Shaw, Feodor Chaliapin, John Reed and Pablo Neruda watched the hustle and bustle of life in Moscow from the windows of their hotel rooms. RBTH would like share a few exciting and curious celebrity moments as spent in Moscow hotels.

Moscow counts five hotels that have been in operation for more than 100 years: the Metropol, the National, the Savoy, the Baltschug Kempinski and the Budapest. Foreign dignitaries and high-profile politicians usually stay at the first two: the Hotel National or the Metropol.

During the course of the 20th century, these hotels were renamed, turned into residential facilities for Soviet officials and more than a few unwelcome tenants, used as Communist Party conference halls, wiretapped, renovated and then restyled to bring back the glamor and splendor of the olden days.

While tumultuous historical events played out across the 20th century, the Hotel Metropol and the National occasionally served as the setting for a number of more curious occurrences.

Chaliapin's peasant song
On October 17, 1905, Tsar Nicholas II, Russia’s final emperor, signed the Manifesto on the Improvement of the State Order, which granted new and democratic freedoms to the Russian people. On the following day, liberal Muscovites gathered to celebrate the occasion at the Metropol restaurant. The party was marked by the presence of Feodor Chaliapin, the renowned opera singer.

For the first time he offered the audience an a cappella version of “Dubinushka” (Cudgel), a folk song that was considered quite vulgar at the time. The choice of song was not a coincidence, as Chaliapin had been born into a peasant family. After singing, he went around the hall with a hat in his hand and collected a substantial sum of money, which he later gave to revolutionary workers. Incidentally, it was “Dubinushka” that would become Chaliapin's signature song.

Bernard Shaw and the most charming widow
In 1931, the Metropol welcomed the playwright Bernard Shaw. The author openly expressed his affection for Soviet Russia, which was closed to foreign visitors at the time. He wanted to explore "the ideal state" first hand. During breakfast at the hotel, Shaw declared that he had to pay his respects at Lenin's coffin right away. Having done that, he went on to visit Nadezhda Krupskaya, Lenin's widow, later referring to her as "the most charming widow in the world."

How Mao lured Stalin out of the Kremlin
In 1950, the Hotel Metropol opened its doors to Mao Zedong, the leader of the Chinese revolution. On the occasion of the signing of a Soviet-Chinese treaty, Mao offered to throw a banquet at the hotel restaurant. The Soviet leader Joseph Stalin was not used to visiting embassies or restaurants and would have preferred the banquet to take place at the Kremlin. However, Mao insisted on holding the reception at a hotel, so Stalin eventually agreed to dine 400 meters outside the Kremlin walls.

At the Metropol, the Soviet leader gave a speech and played a game of chess with Mao. Historians are still in the dark as to who won the game in question.

John Reed on revolution and broken windows
In November 1917, at the height of revolutionary events, John Reed, the American journalist and protagonist of Warren Beatty’s 1981 film “Reds,” found shelter at the Hotel National. In his book, “Ten Days That Shook the World,” he described his arrival to revolutionary Moscow as follows:

“Down the Tverskaya the shop-windows were broken, and there were shell-holes and torn-up paving stones in the street. Hotel after hotel, all full, or the proprietors still so frightened that all they could say was, 'No, no, there is no room! There is no room!'. . . . At the big Hotel National they finally took us in. . . . On the top floor the manager showed us where shrapnel had shattered several windows. . . . We dined at a vegetarian restaurant with the enticing name, ‘I Eat Nobody,’ and Tolstoy's picture prominent on the walls, and then sallied out into the streets."

Pablo Neruda's life hack
During his visit to the Soviet Union in 1949, the Chilean poet Pablo Neruda stayed at the Hotel National. Neruda objected so strongly to any interpretation of his poetic works that he deliberately booked a table next to the noisy band at the hotel restaurant. As a result, his Moscow friends and acquaintances didn't have the opportunity to engage him in any wordy arguments about his creative concepts.

The author would like to thank the Federation of Restaurateurs and Hoteliers of Russia, hotels Metropol and National for their assistance in researching this article.