5 historic destinations near St. Petersburg you should visit right now 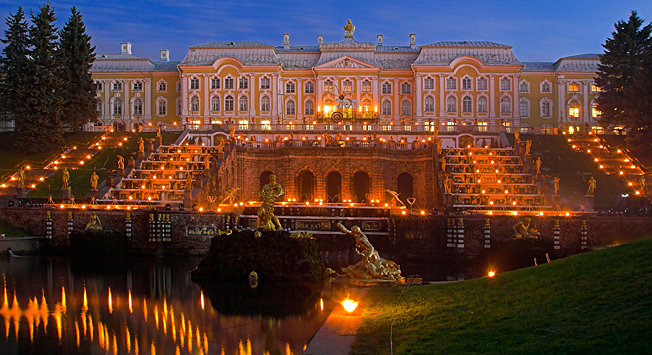 Alamy/Legion-Media
The sparkling fountains of Peterhof, the reconstructed Amber Room at the summer residence of Russian empresses, a fortified island town and other reasons to explore St. Petersburg's suburbs. 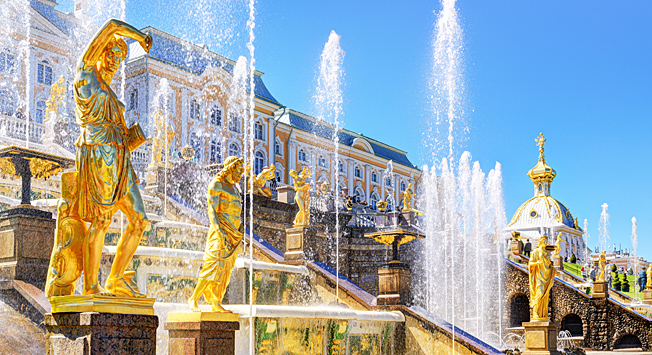 Photo credit: Shutterstock/Legion-Media
Located at the shores of the Gulf of Finland, Peterhof, or “Peter's yard,” may be St Petersburg’s most luxurious suburb today, although it resembled an ordinary courtyard during Peter the Great’s lifetime. Monplaisir, the Tsar's palace, gives the impression of a rather modest pavilion even today and the Grand Palace most likely looked like a barracks back then. The yard was surrounded by scattered mud huts of peasants that were halfway dug into the ground.

Nonetheless, Peter the Great enjoyed staying here, claiming that the marine air restored his health like no other medicine. To render the landscape more agreeable, he ordered the construction of fountains and laid out green lawns, imitating the gardens of his beloved Europe. Inviting foreign ambassadors and members of the court, he put his guests’ energy to use: after they had enjoyed a few drinks and some entertainment, he would order them to pick up axes and spades and get to work alongside his serfs pulling up stumps, digging canals and planting bushes and trees.

Peterhof did not acquire its celebrated Versailles-style planning until well after Peter's death. His daughter, the Empress Elizabeth, rebuilt the Grand Palace, giving it the splendor we still enjoy today. 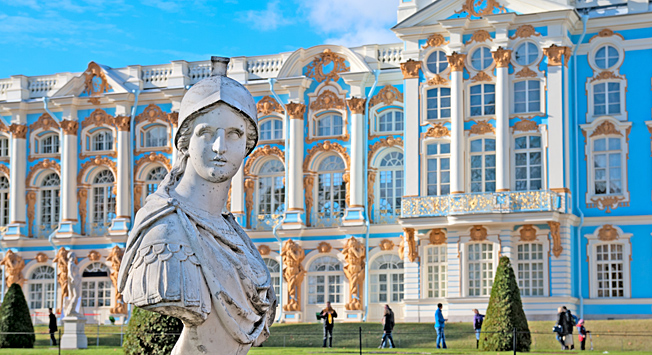 Catherine palace in Pushkin. Photo credit: Lori/Legion-Media
Pushkin's principal attraction is the Tsarskoye Selo State Museum-Preserve, which bears the former name of the town. The core element of the museum is the Catherine Palace, the summer residence of Russian empresses. The contents of the legendary Amber Room were looted from the palace during World War II, but were later restored. The room is now open to the general public. 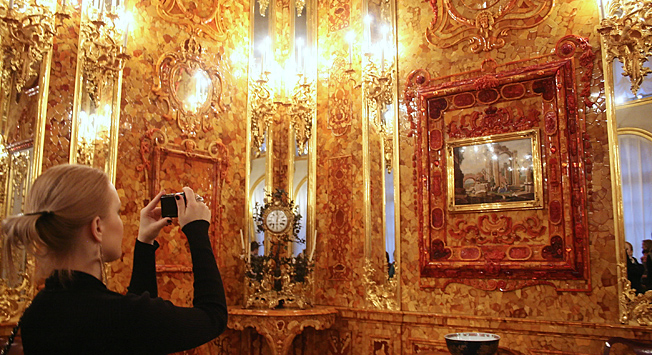 In summer, especially on weekends and public holidays, the palace is rather crowded, but it is a pure pleasure to visit in winter. The residence is surrounded by Catherine Park with pavilions, galleries and grottoes and entrance is free from October to April. The palace is adjoined by the Lyceum, the celebrated top-rank boarding school where Alexander Pushkin, the famous Russian poet, received his education. 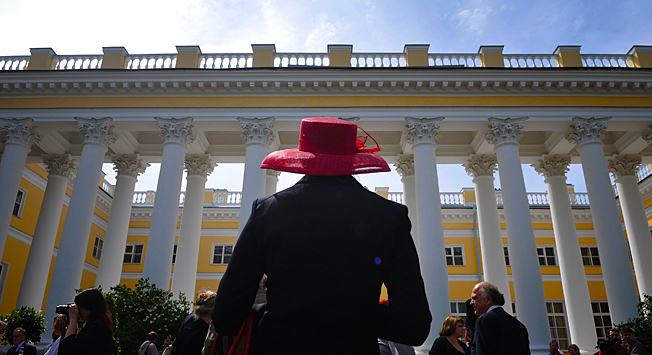 The heart of the park is Alexander Palace, a wedding present from Catherine II to her grandson, Sasha, later crowned as Alexander I. The gift was much appreciated by both the future emperor and his brother Nicholas I, as well as all other Russian monarchs. Even the last tsar, Nicholas II, chose the palace as his primary residence and it was from here that he was taken to Siberia as a prisoner after the 1917 Revolution. 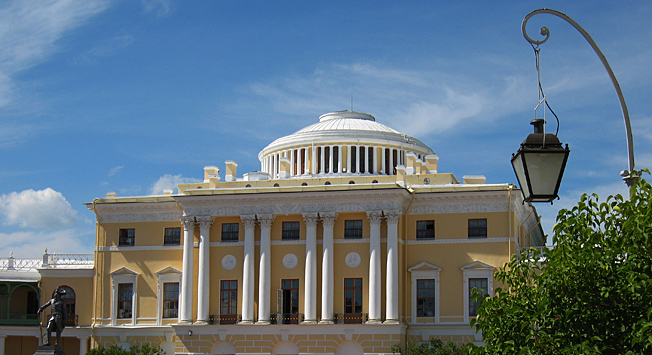 Pavlovsk palace. Photo credit: TASS/Irina Afonskaya
The entire Pavlovsk ensemble with its parks and palaces was Catherine II's gift to her son, Paul. However, Paul preferred Gatchina (see below) and instead gave his mother's gift to his wife. It was for her that he built Pavlovsk Palace, while his own passion was the Bip Fortress, a toy castle with bastions and a drawbridge. After Paul's death it was turned into Russia's first school for the deaf.

During Nicholas I's reign, Russia's first railroad was built directly to Pavlovsk Park. Pavlovsk station, also known as the Vauxhall Pavilion (which sounded like “vokzal”), soon acquired fame as Russia's main cultural venue. It was so celebrated Vauxhall entered the Russian language as "vokzal," denoting any major railroad station, while the pavilion itself became known as the "Musical Vauxhall." Johann Strauss gave violin concerts here, Fyodor Shalyapin sang arias, the composer Sergei Prokofiev played the piano, the ballerina Anna Pavlova danced, while Dostoevsky, Balzac and Dumas recited fragments of their masterpieces – although not all at the same time. Unfortunately, Vauxhall Pavilion was entirely destroyed during World War II and nothing but a decorative street lamp marks its location today. 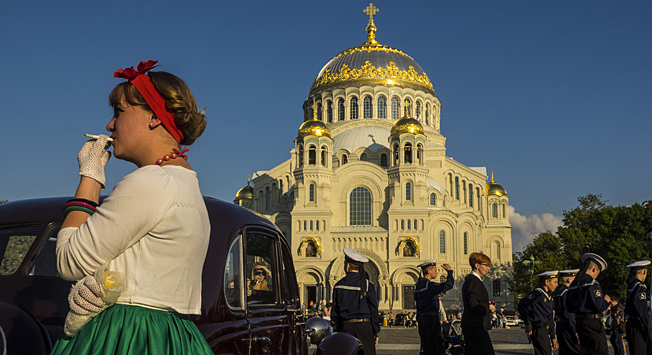 Kronstadt Naval Cathedral. Photo credit: Ruslan Shamukov
A fortified island town, seaport and naval base Kronstadt was closed to foreign visitors during Soviet times. In this town of cannons, anchors and seafaring memorials, even local churches used to belong to the Ministry of Naval Affairs. The island's most beautiful church is the St. Nicholas Naval Cathedral. Its gleaming dome is visible from St. Petersburg on fine days and the sound of its bell is also audible from afar. Less appealing to the eye, but still quite fascinating, is Fort Alexander I, a former plague laboratory accessible only by boat. 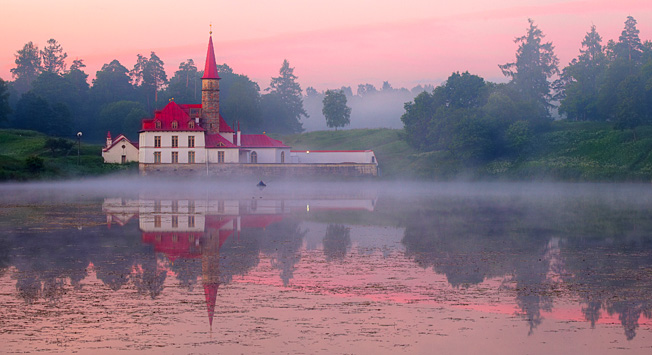 Priory palace in Gatchina. Photo credit: Lori/Legion-Media
While the Russian Empire was being ruled by Catherine II, her son Paul I, played the role of tsar in Gatchina. He commanded a toy army in Prussian-style uniforms and granted his soldiers fictitious awards for outstanding military drill performances.

The town's major sight is Gatchina Palace with a parade square in front of it, as well as the Palace Park with its humpback bridge and the remains of the arena where Paul arranged his "knight carrousels." Guests would run around a pole on wooden horses, trying to hit the goal with a spear: a ring hanging in the air or a painting of a grinning Moor.

Paul was so fond of mysticism and medieval knights that upon becoming emperor, he gave shelter to the Maltese Knights Hospitaller, a Catholic military force that had suffered at the hands of Napoleon. Consequently, he was elected Grand Master of the order and also built Priory Palace in Gatchina for the group.