7 best places to see the Northern Lights in Russia 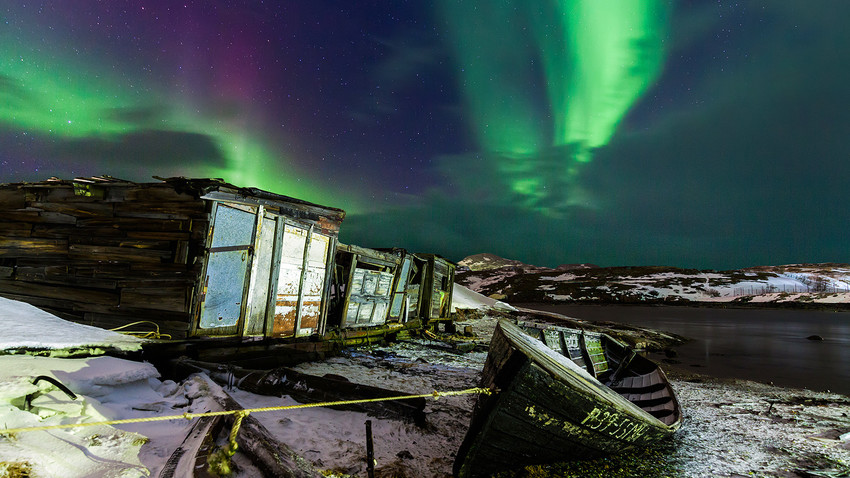 Getty Images
The fabulous Aurora Borealis is a wonderful natural phenomenon, where the sky glows with thousands of seemingly dancing lights. Let's find out where are the best places to see them in Russia!

The Northern Lights are something akin to a miracle because their appearance depends on many factors: weather, solar and geographic location. Also, the evening air should be frosty and the sky clear, without any clouds.  The Aurora season lasts from the end of September to the end of March, and it usually appears from 9 p.m. to midnight. Check the Aurora forecast before your trip.

In Russia, there are many places for observation. The Arctic Circle crosses a large part of the country, and the nighttime light show can be seen from Karelia to Chukotka. Sometimes, even St. Petersburg residents can see the magic Northern Lights. Here are the best places to enjoy them. 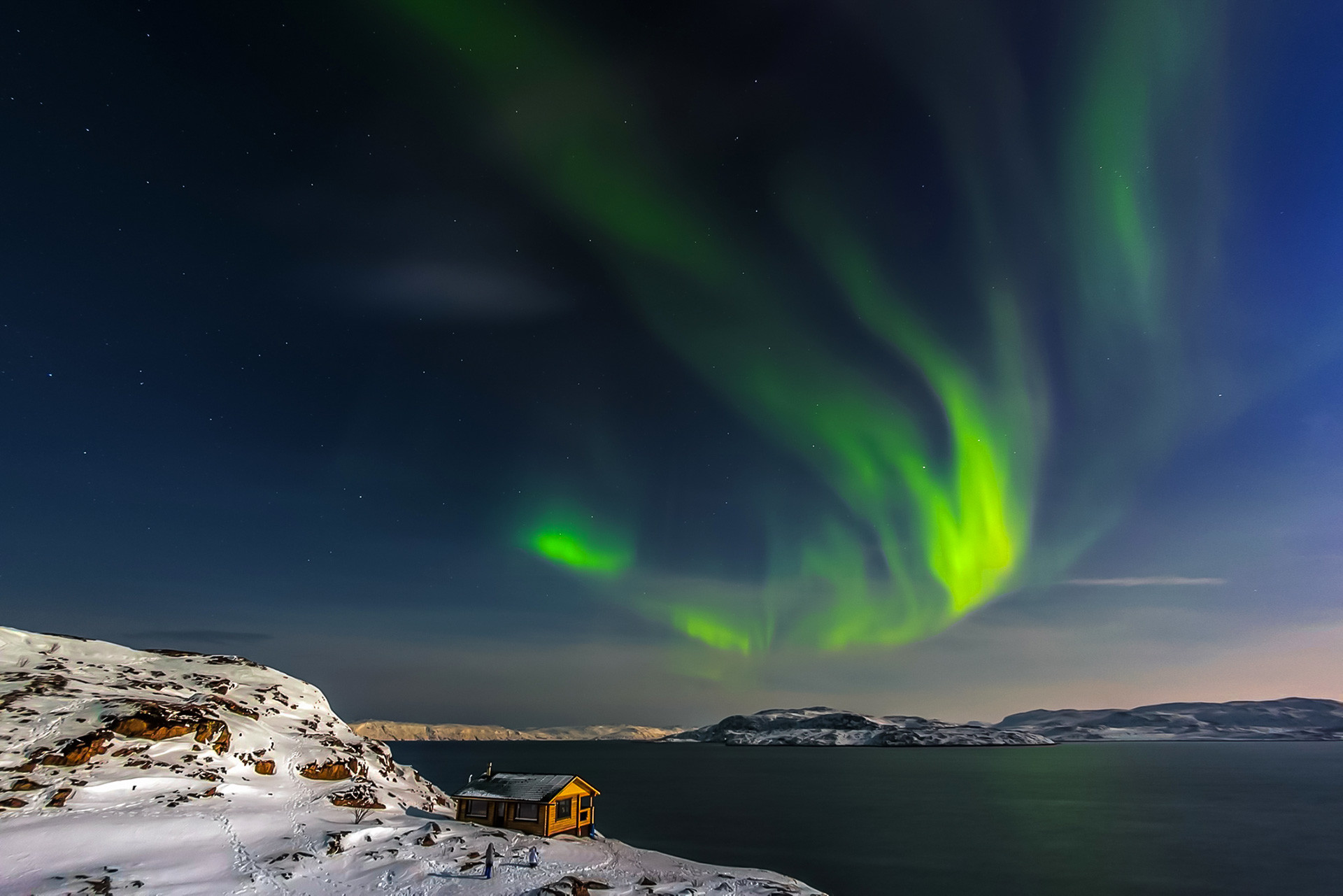 A cozy house on the coast of the Barents Sea and the aurora. Kola Peninsula, Murmansk region.

Murmansk Region, which is located on the Kola Peninsula, is very popular among Russian tourists who go there to ski, snowboard and visit traditional Sami villages. With a population of 300,000, this is the world’s largest city beyond the Arctic Circle.

You can see the Aurora in Murmansk, but tourists are recommended to travel 120 kilometers to the small village of Teriberka, which was featured in the movie, Leviathan. The most convenient option is to order a tour, which costs about 9,000 rubles ($150) per person including transportation and hotel. In fact, there are many small towns near Murmansk from where one can see the Aurora, but most are closed to tourists. Good news: The winter in Murmansk is mild, with the average temperature in December and January about minus 10-15 Celsius.

Maria Stambler and her husband visited Teriberka just before New Year’s Eve 2016, a fairy tale time of year, and spent about four hours in the middle of the tundra during the night. Despite the cold, they said it was “an incredible experience.”

“Eventually, we stopped near a large field and everyone marched through the snow to the spot that would serve as the and photo point. There were about 30 people that evening eager to see the Northern Lights. And see them we did!” she marveled.

How to get there: the trip to Murmansk from Moscow or St. Petersburg is rather cheap (return flight costs about 6,000 rubles - $100), and it takes only two hours to get there. You can reach Teriberka by bus (schedule in Russian), or by taxi (about 5,000 rubles - $85). The official tourism website of the Murmansk Region.

This small town is the nearest to the Khibiny Mountains on the Kola Peninsula and a popular place for skiing. There are several resorts here, including Kukisvumchorr, Bolshoi Vudyavr (only in Russian) and Kolasportland (only in Russian).

The Khibiny Mountains are located south of Murmansk, but the climate is more severe. From high up, the sky is clear and bright, and there are more chances to see the Northern Lights.

How to get there: The Khibiny airport near Kirovsk welcomes regular flights from Moscow and St. Petersburg, (roundtrip costs 11,000 rubles - $185). Visit Kirovsk’s official tourism website.

This rather large northern city (population 350,000) is also a popular destination for winter tourism. Founded in the 16th century, Arkhangelsk lies in the Arctic Circle, at a point where the Northern Dvina River meets the White Sea. Today, this is a modern city with a major historical center and fine examples of wooden architecture. By the way, Arkhangelsk is depicted on the 500-ruble banknote.

The Aurora can be seen in the city, but it’s worth going to the northern part of the Arkhangelsk Region. The best time to observe the Aurora is the spring and autumn equinox, as well as in winter.

How to get there: Roundtrip flights from Moscow or St. Petersburg cost about 10,000 rubles ($170), and take only 2 hours. Visit the official tourism website of the Arkhangelsk Region. 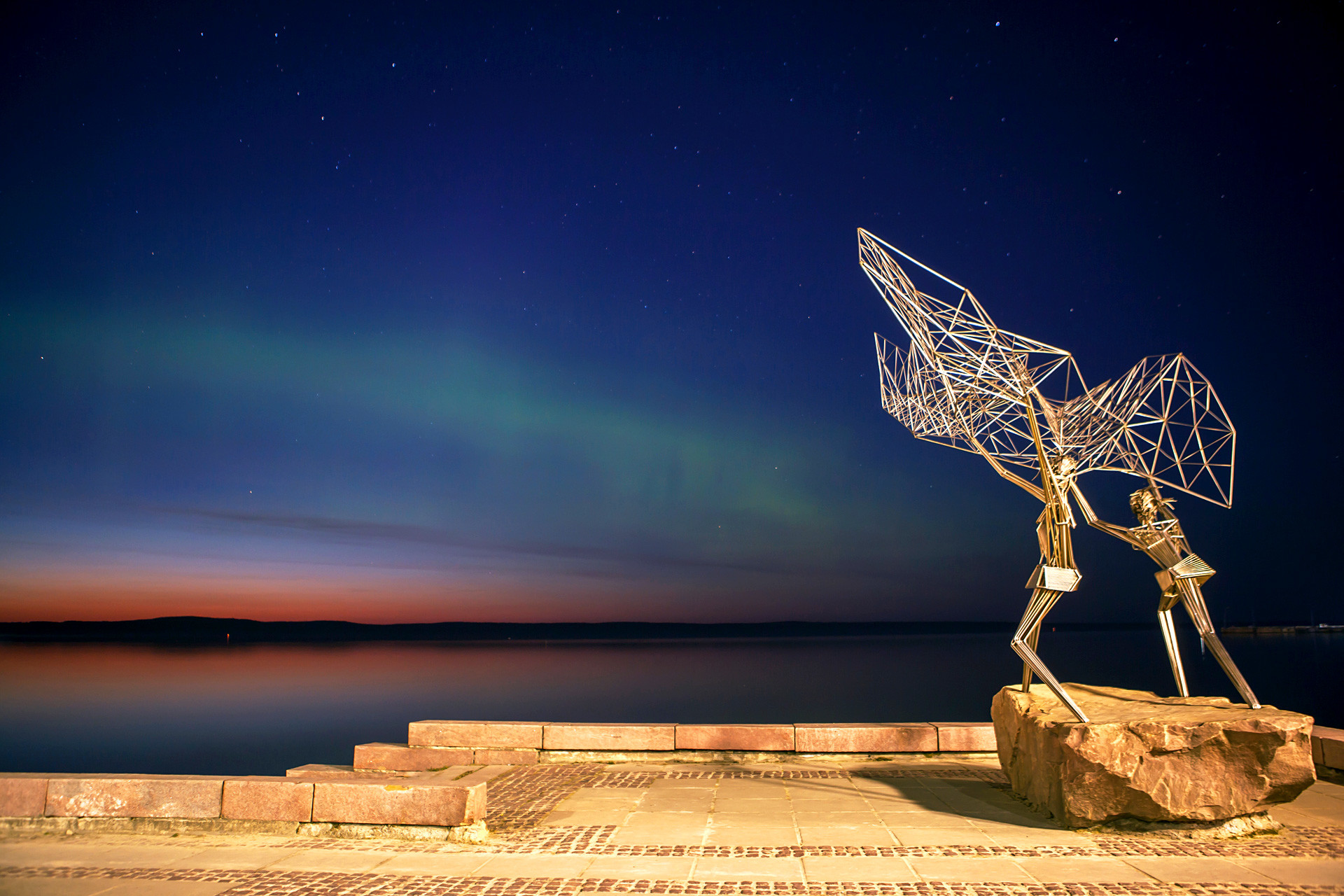 Sometimes the Northern Lights can be seen in Petrozavodsk, the capital of Karelia. But for more atmospheric photos visit the small Karelian towns in the north:  Kem, Belomorsk, Nilmoguba or along the White Sea coast. You can also observe the Aurora on Solovki Island.

How to get there: Regular flights from Moscow cost only 7,000 rubles ($120), and there is also the Lastochka express train from St. Petersburg (twice a day). Here is Karelia’s official tourism website. 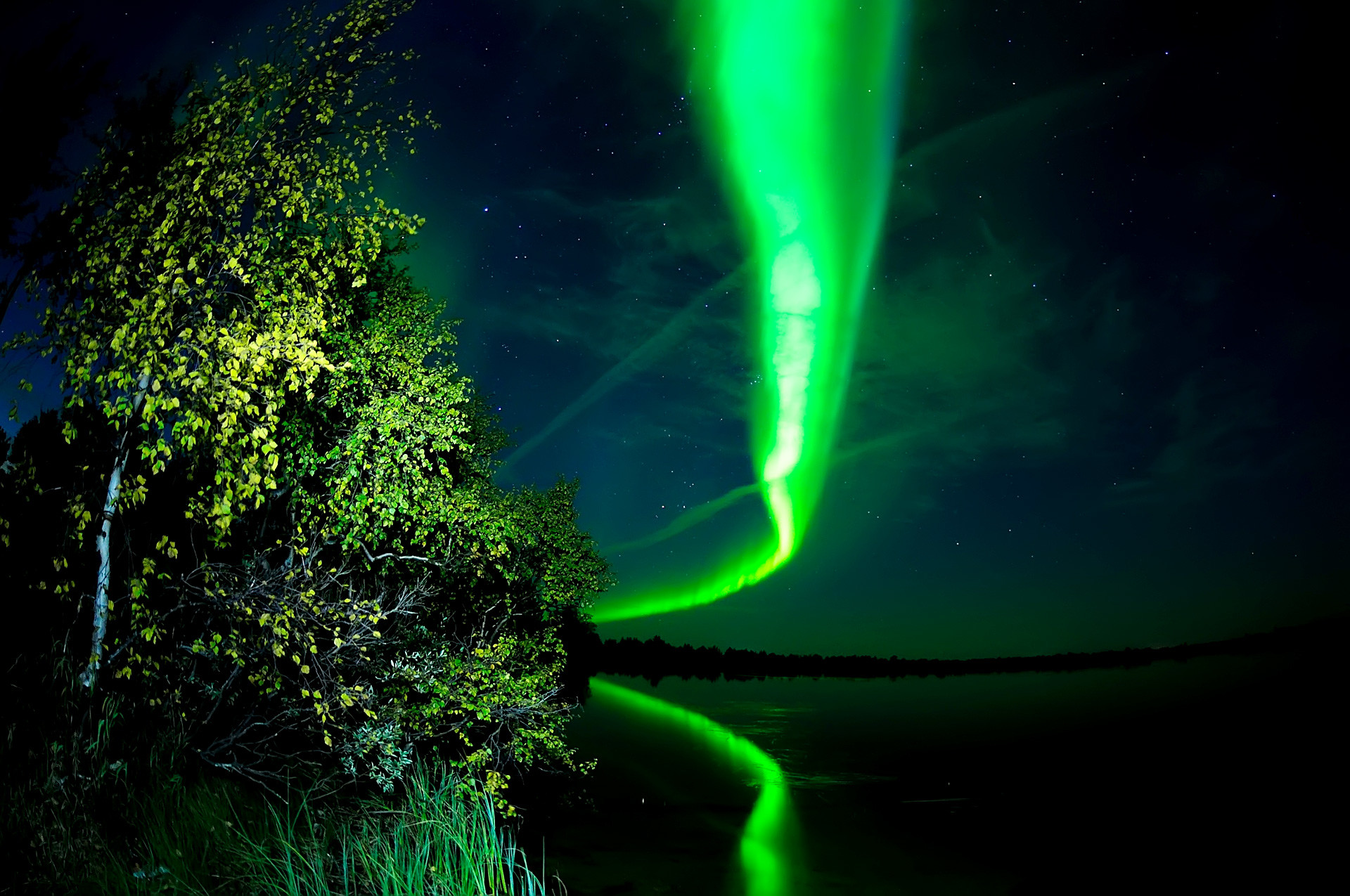 Northern Lights with reflection in the lake, Naryan-Mar.

capital of the Nenets Autonomous District in the north of Russia is located beyond the Arctic Circle. Naryan-Mar is a city of reindeer farms, and oil.

There is a monument to the first Russian city built in the Arctic – Pustozersk, founded in 1499. In the 16th century, Pustozersk became a major Russian outpost in the north and in Siberia, and it often served as a place of exile and imprisonment.

The Aurora here consists of numerous shadows and flickering that makes it really fantastic. The best time to visit the region in order to see the Northern Lights and to listen to the legends of the vanished city is in early fall.

How to get there: Roundtrip flights from Moscow to Naryan-Mar cost about 15,000 rubles ($250), and take 2.5 hours. Visit the website of the Arctic Tourism (in Russian only).

Northern Lights are not a rarity in the Komi Republic, and sometimes the Aurora is seen even in August in Syktyvkar (the capital of Komi), but you’ll have better chances if you go further north to the city of Vorkuta (population 60,000). The region’s northernmost city lies at the far end of a railway line that stretches 2,500 km from Moscow. In the 1930-50s, the region was home to the largest Gulag camp, with over 70,000 inmates. In modern Russia, the city is known for coal mining. The climate is severe, with average temperatures in winter hovering around minus 20 Celsius, and in summer frost is not uncommon.

Locals say the Aurora can be seen even in summer, but they usually see it in winter.  “At this time of year it’s always dark, and the Northern Lights can be seen in the morning, afternoon, and evening. It is emerald green, red and even white.”

How to get there: Flights from Moscow to Vorkuta are several times a month and cost about 30,000 rubles ($500). Travel time is three hours. Another way to reach Vorkuta is via Syktyvkar by train (return flight Moscow – Syktyvkar costs 12,000 rubles - $200; the train takes 21 hours). Visit the Komi Republic tourism website.

The Republic of Sakha-Yakutia is only for the most frost resistant people, and it boasts the coldest city in the world – Oymyakon, where winter temperatures can drop to minus 60 Celsius.

The Northern Lights can be seen near the regional capital of Yakutsk, as well as from other local settlements. Some of the northern towns are closed for individual tourists, but they can be visited with tour groups.

How to get there: Regular flights from Moscow to Yakutsk cost about 20,000 rubles ($330), and take 6.5 hours. Visit Yakutia’s tourism website.