Peter the Great and his boat that launched the Russian fleet

On the shore of Pleshcheyevo Lake, midway between Moscow and Yaroslavl on the Volga River, sits the estate of Veskovo. In 1911, the Russian photographer Sergei Prokudin-Gorsky made the journey to the estate to photograph a small boat (botik) called “Fortuna”. This seemingly modest object is a national shrine associated with the young tsar Peter I, his personal boat from a flotilla built during 1689-92 on Pleshcheyevo Lake. My photographs were taken over a century later, in 2014 and 2019. 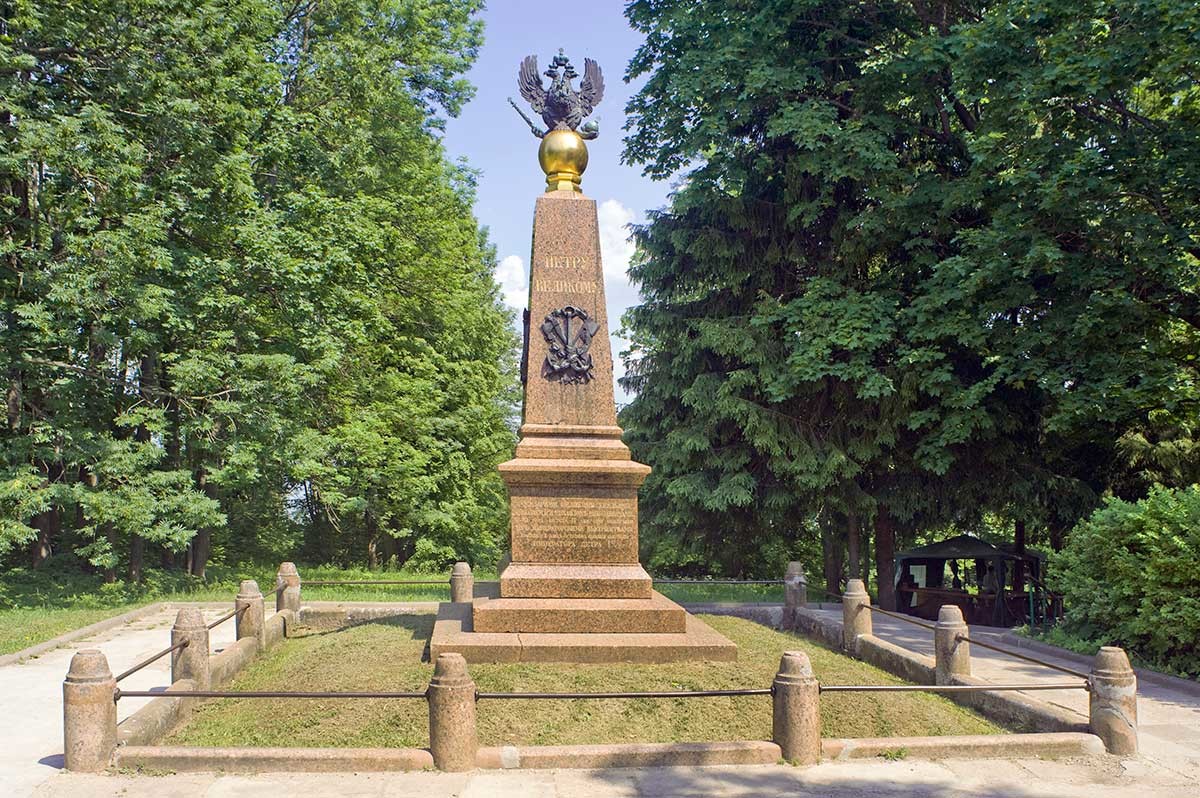 The estate lies some 2 miles south of the town of Pereslavl-Zalessky, long patronized by Russia’s rulers. It was established in 1152 by Yuri Dolgoruky, prince of the large territory of Rostov-Suzdal and founder of Moscow. Settlers from the territory of Kievan Rus had moved to the area since the turn of the 12th century, The town’s name is thought to derive from the town of Pereyaslavl, near Kiev, with the addition of “Zalessky” (“beyond the forests”) to signify that the settlement lay within a forest zone. 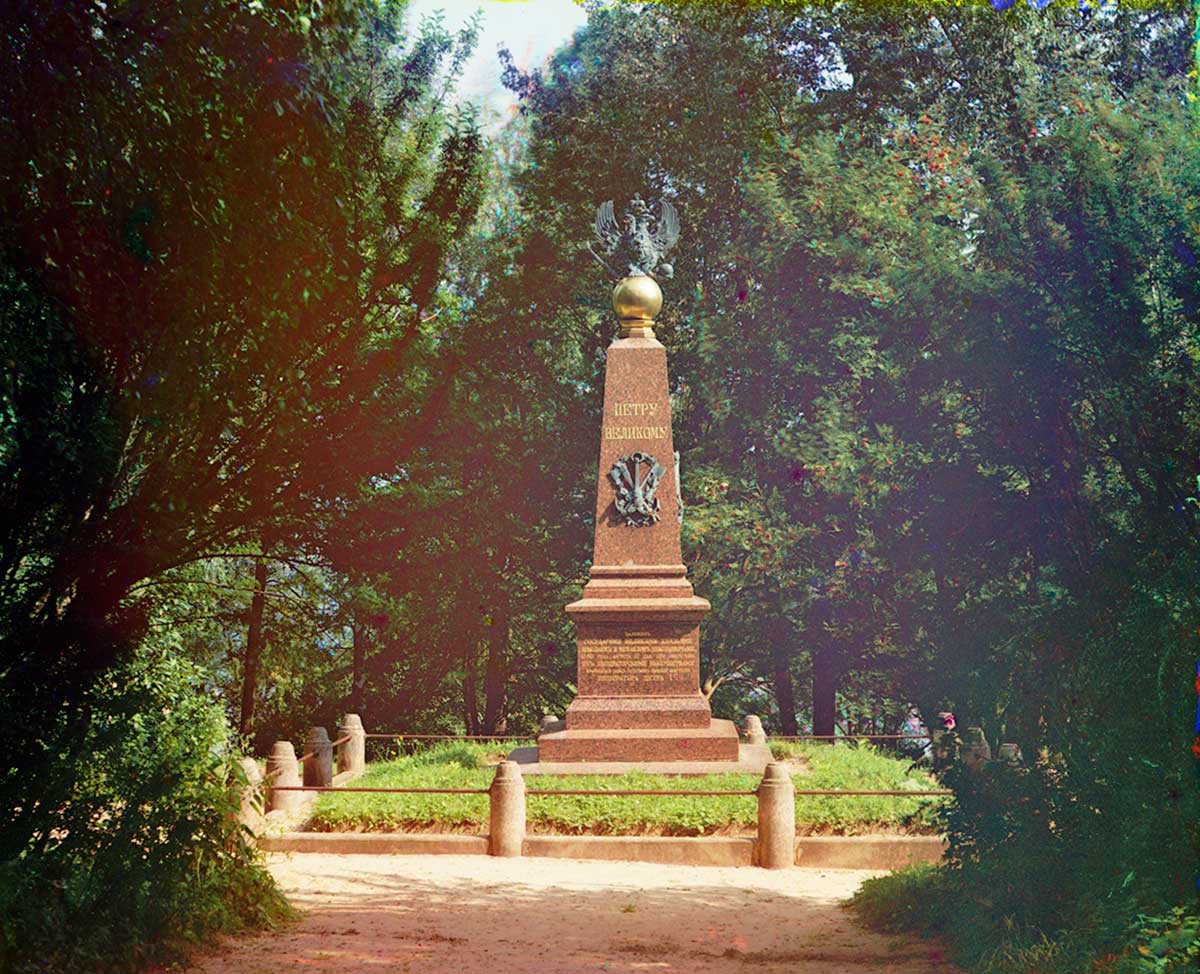 Yury Dolgoruky spent most of his life in a quest for the princely throne in Kiev, and he died in 1157, within a year after achieving that goal. The major monument to his rule in Pereslavl-Zalessky is the Cathedral of the Transfiguration of the Savior. Begun in 1152 and completed by his son Andrey Bogolubsky in 1157, the cathedral is one of the earliest cut stone churches in Russia. 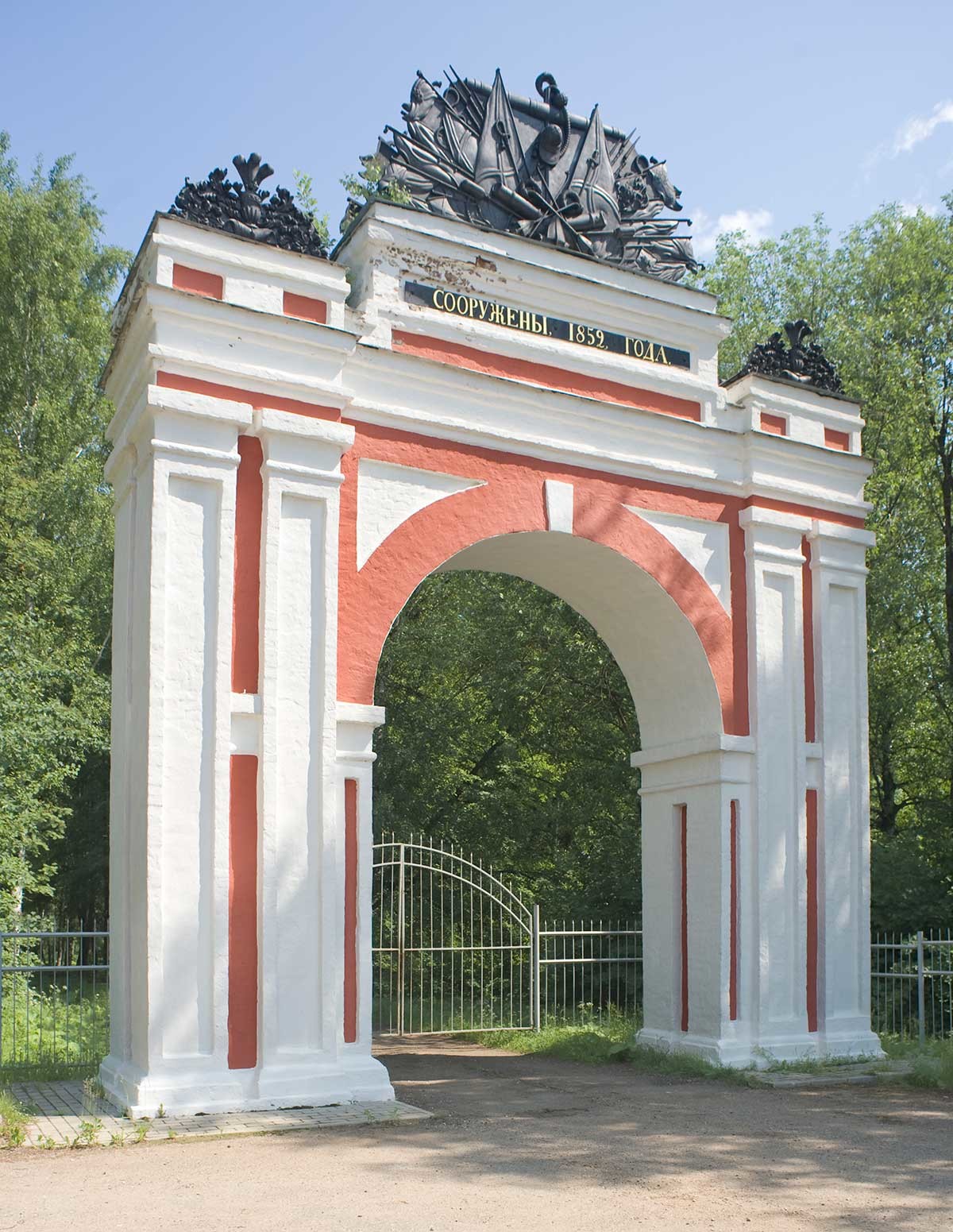 Pereslavl-Zalessky had several monastic institutions that reflected the town’s role as a center of early missionary activity at a time when much of the surrounding territory had only nominally accepted Christianity. The number of monasteries was also due to the town’s position on a major pilgrimage route used not only by humble believers but also by the grand princes of Muscovy.

The beginning of the Russian fleet

For a brief period in the late 17th century, Pereslavl played an important role in national affairs. In the early spring of 1688, the 15-year-old Peter I was occupied in Moscow with the training of his Western-inspired army regiments when he caught site of a small English boat — the “St. Nicholas” — in a shed with objects that belonged to his great uncle, Nikita Ivanovich Romanov. 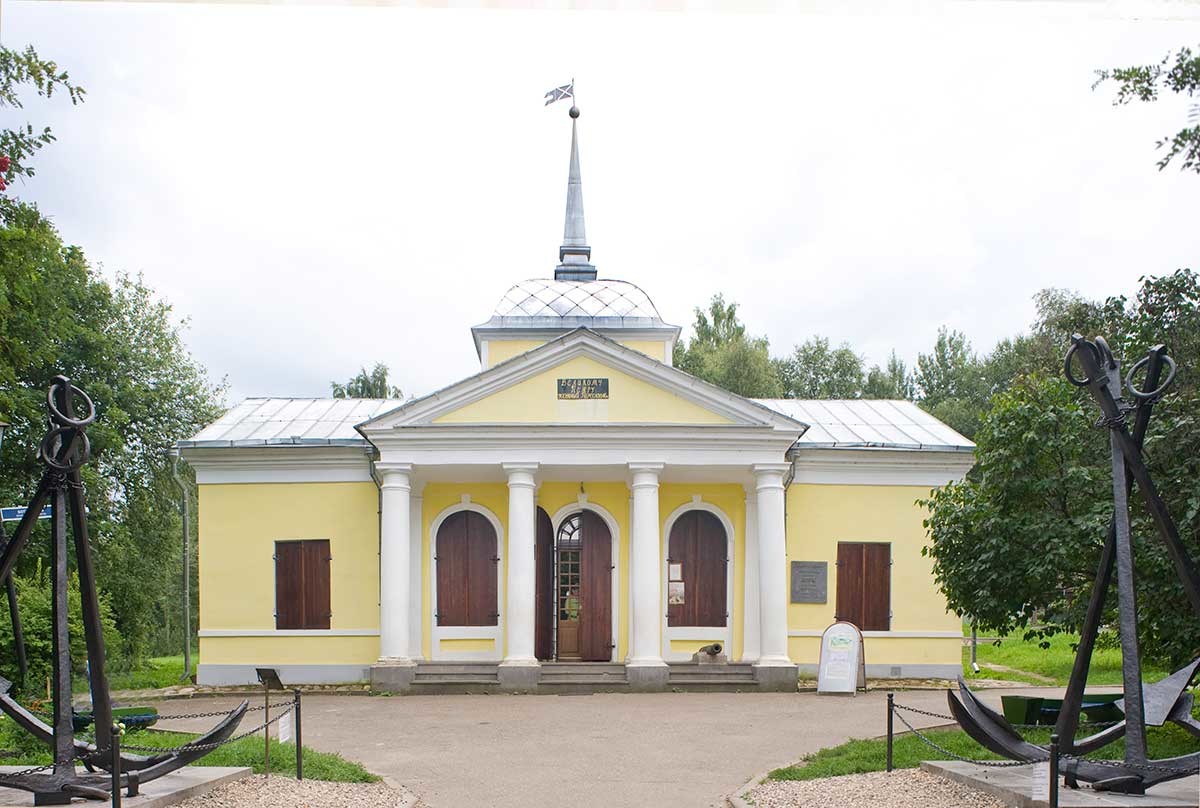 Veskovo. Boat House. View from monument to Peter the Great. On either side: anchors from boats in the Pleshscheyevo flotilla. August 22, 2013

Seized by a desire to master the maritime arts, Peter had the boat refitted by a Dutch ship master, Karsten Brant. He began sailing on Moscow’s Yauza River and on the pond at Izmailovo, an ancient Romanov estate rebuilt by his father, Tsar Alexey Mikhailovich (1629-76). (This boat, called “the grandfather of the Russian navy,” is now housed in a special building at the Peter and Paul Fortress in St. Petersburg.)

Peter’s youthful ambitions demanded a larger aquatic space for maneuvers, and he soon learned of the smooth expanse of Pleshcheyevo Lake. In order to travel to the lake, Peter needed to gain the approval of his mother, Natalya Kirillovna Narshkina (1651-94), Tsar Alexey’s second wife and subsequently widow. In his Naval Manual of 1720, Peter the Great remembered the way he gained maternal approval: he explained the journey as a pilgrimage to the great Trinity-St. Sergius Monastery, located on the route to the lake. 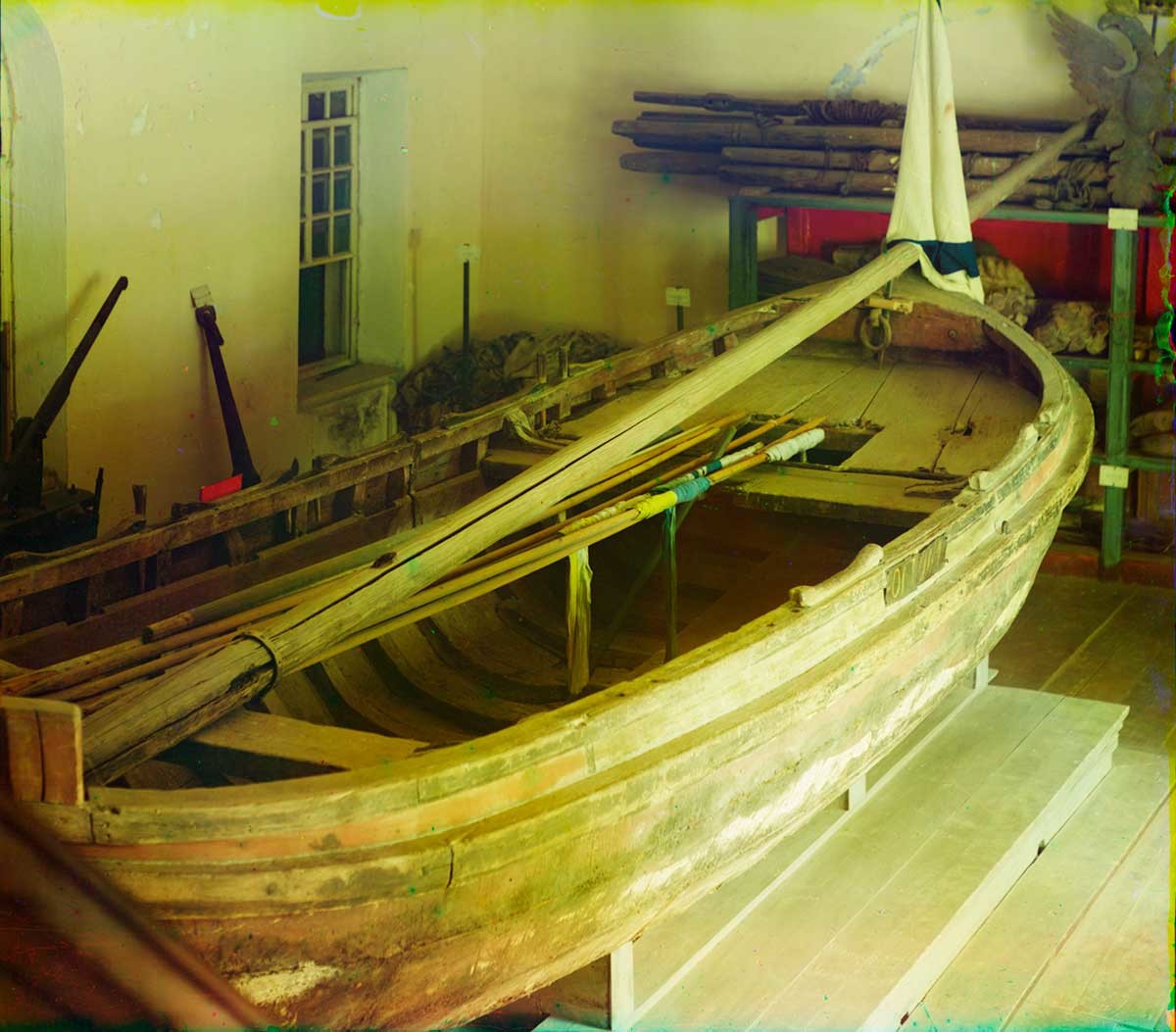 The boat Fortuna, "father of the Russian fleet". View from stern. Summer 1911

On first viewing Pleshcheyevo Lake in July 1688, Peter recognized it as an ideal place to begin the quest to create a Russian fleet. Returning to Moscow, he received the approval of his still-skeptical mother to build a small flotilla on the lake. Work soon began on Western-style boats under the supervision of Karsten Brant at a boatyard established on the small Trubezh River, which empties into the lake near the center of Pereslavl-Zalessky.

However, in the summer of 1689 Peter’s attention was seized by the dramatic events of a looming dynastic crisis. Since the late 1670s and 80s his mother, Natalya Naryshkina, and the Naryshkins in general found themselves in constrained circumstances because of court intrigues. Attempts by Naryshkin supporters to have Peter proclaimed tsar were thwarted, and some members of the family were killed in 1682. 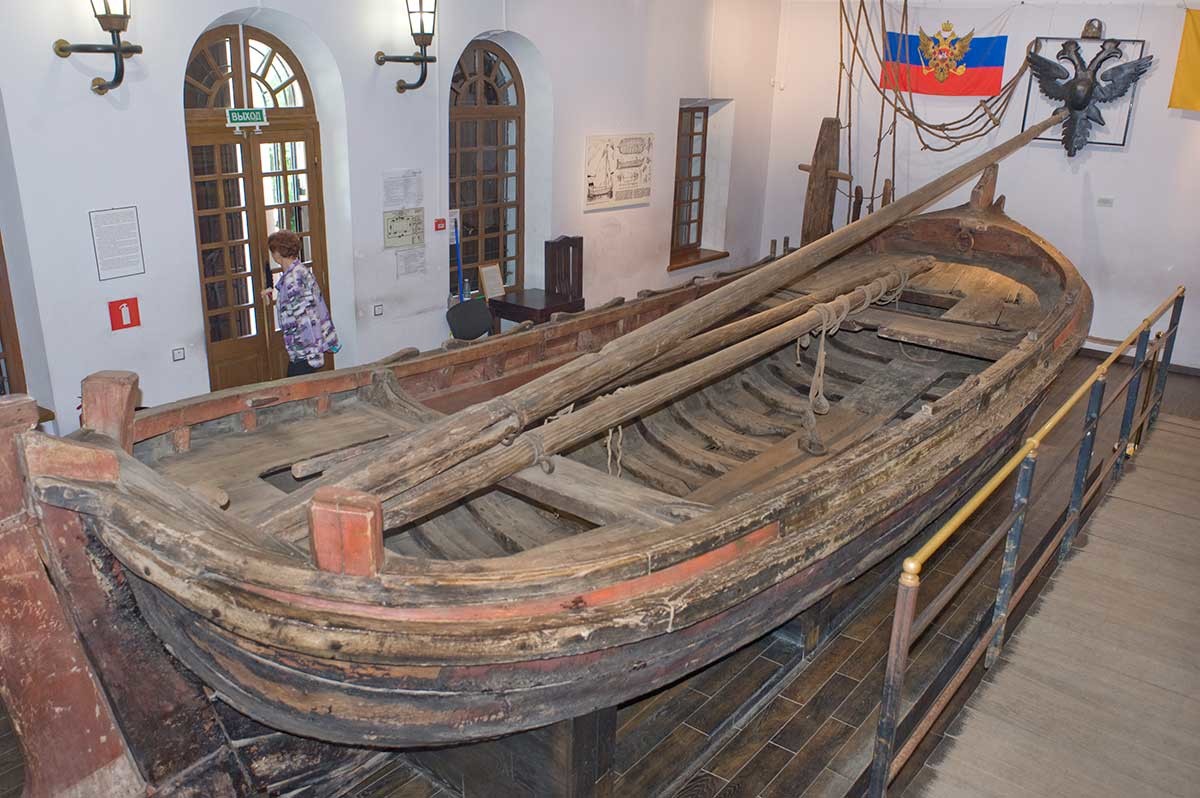 A compromise was arranged in which Peter served as co-tsar with his half brother Ivan V, while effective power was held by a regent, Sophia, Peter’s half-sister. Their incipient conflict came to a head in August 1689, when each maneuvered to overthrow the other.

Peter prevailed, and by September, Sophia had been confined to Moscow’s Novodevichy Convent. Although Ivan nominally remained co-tsar until his death in 1696, real power lay with Peter and his mother Natalya Naryshkina.

Following his consolidation of power in the fall of 1691, Peter left state governance to his mother and turned full efforts to construction of the Pleshcheyevo flotilla. Work was also completed on a complex of buildings at Gremiach Hill (site of the Veskovo estate) that included Peter’s log residence, the “poteshny dvorets.”

By May 1692, at least two frigates had been completed, including the 30-cannon “Mars.” They were supplemented with dozens of smaller vessels, some of which had been hauled from Moscow over the winter. 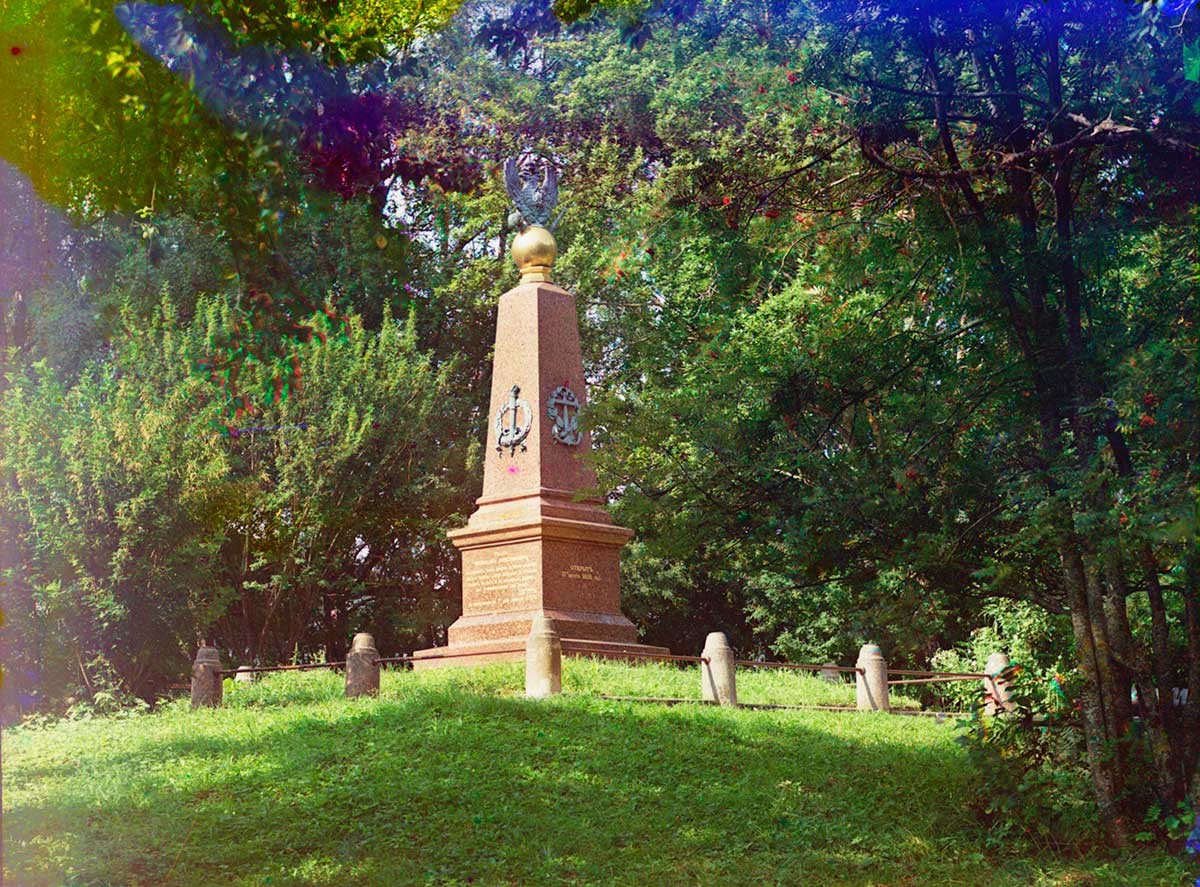 Monument to Peter the Great. View from park, with text of Peter's order (ukaz) to preserve the Pleshscheyevo flotilla. Summer 1911

Although by no means the largest boat in the flotilla, “Fortuna” was considered the most important and by the late 18th century was even called “the father of the Russian fleet.” The Dutch-type oak vessel (called “shlyupka” in Russian),  24 feet in length could accommodate five pairs of oars and had a reinforced block for a mast and sails in the middle. It was steered by a rudder. 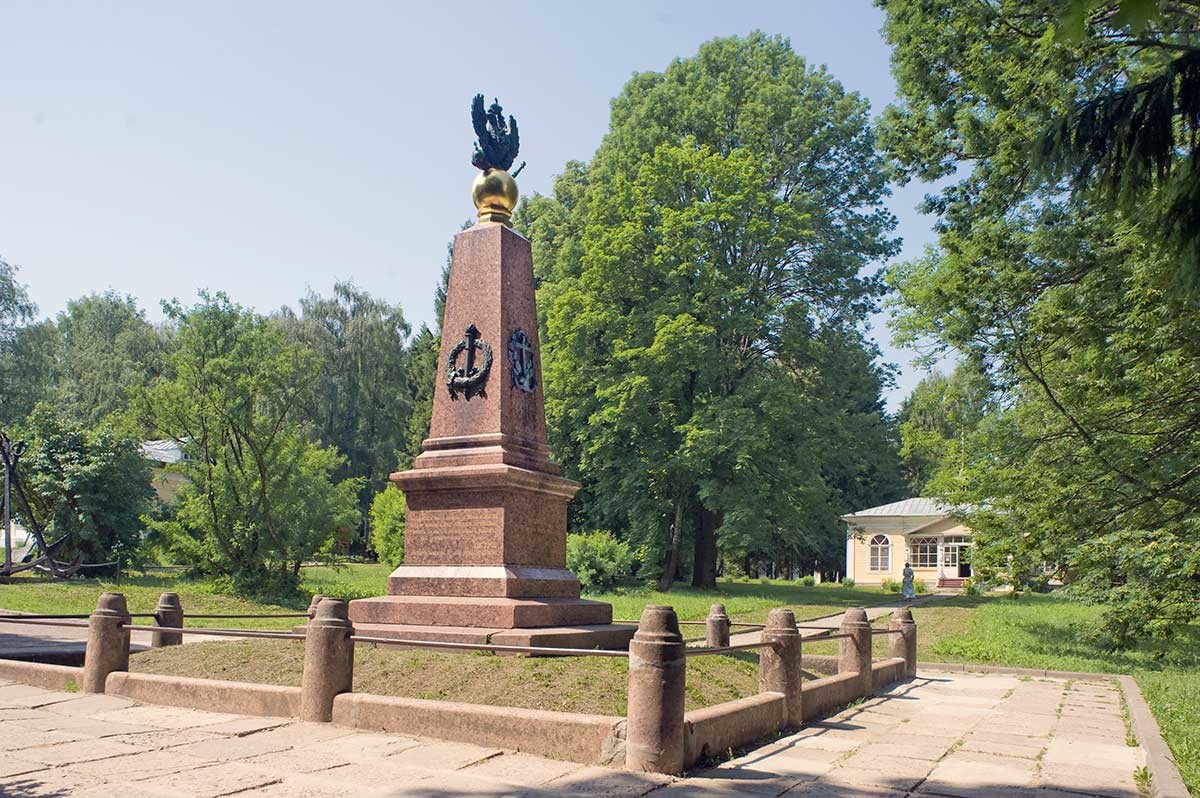 Monument to Peter the Great. View from park, with text of Peter's order (ukaz) to preserve the Pleshscheyevo flotilla. June 7, 2019

“Fortuna” may well have been built by Peter himself with the help of Brant. The physically strong young tsar was not averse to manual labor, and he later worked at a Dutch shipyard in 1697 as part of his “Grand Embassy” to Holland and England in 1697-98.

It is generally thought that Peter tried his hand at directing flotilla maneuvers from “Fortuna.” These exercises concluded on Aug. 1, 1692 with a mass display of the flotilla with cannon fire. Peter’s steadfast Butyrsky Infantry Regiment from Moscow also participated in the demonstration. 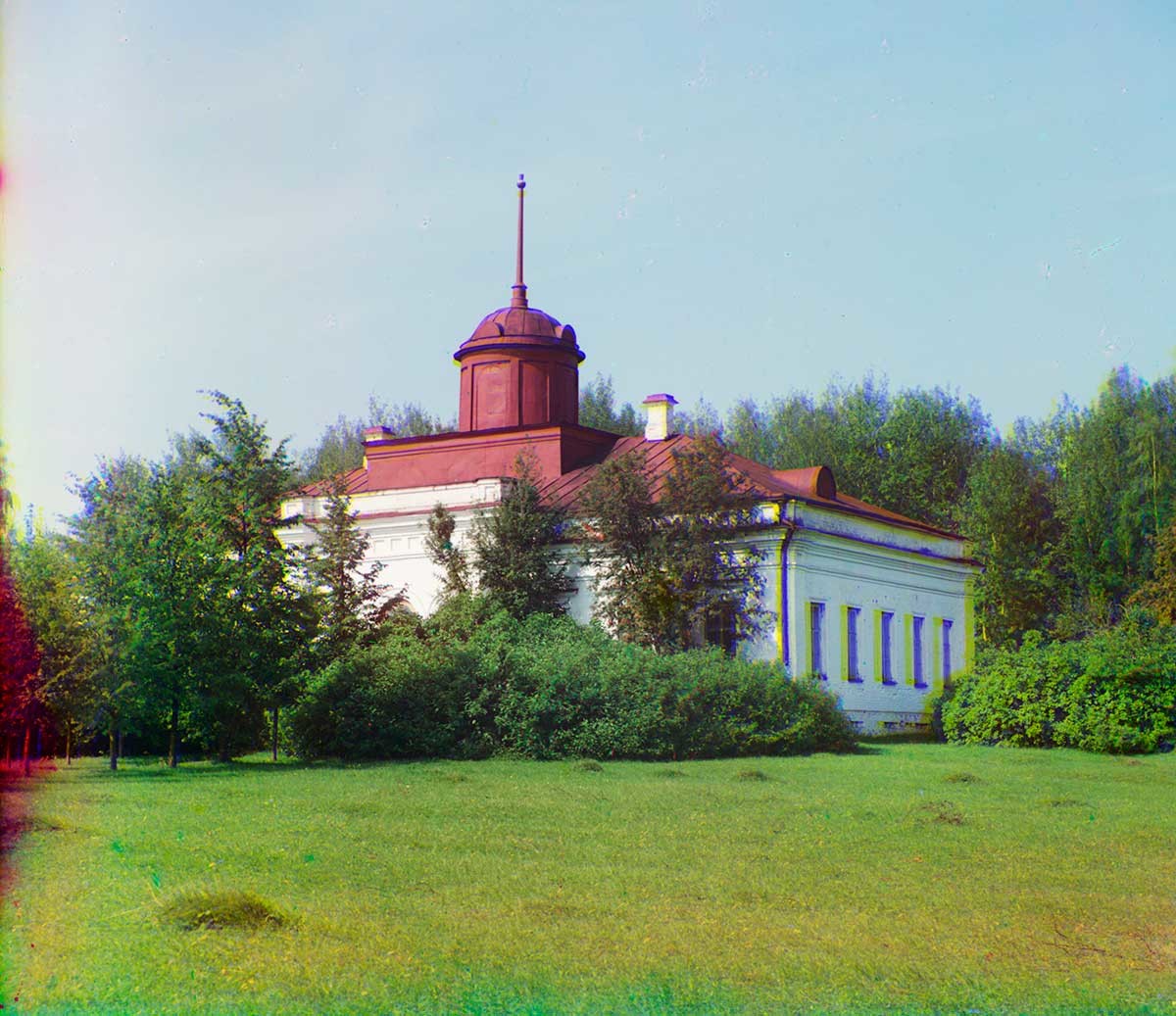 Thereafter, Peter’s ambitions inevitably turned to the open sea, and in 1693 he moved naval operations to broader vistas on the White Sea at the port of Arkhangelsk. Nonetheless, the Pleshcheyevo period remained firmly Peter’s mind as an essential part of his legacy.

During a trip through Pereslavl-Zalessky in February 1722 at the beginning of his campaign against Persia (1722-23) Peter noticed the rapid decay of his Pleshcheyevo enterprise and commanded that it be preserved. The Pleshcheyevo flotilla was taken out of water and placed on blocks, and the Gremyach Hill site was conserved as state property. 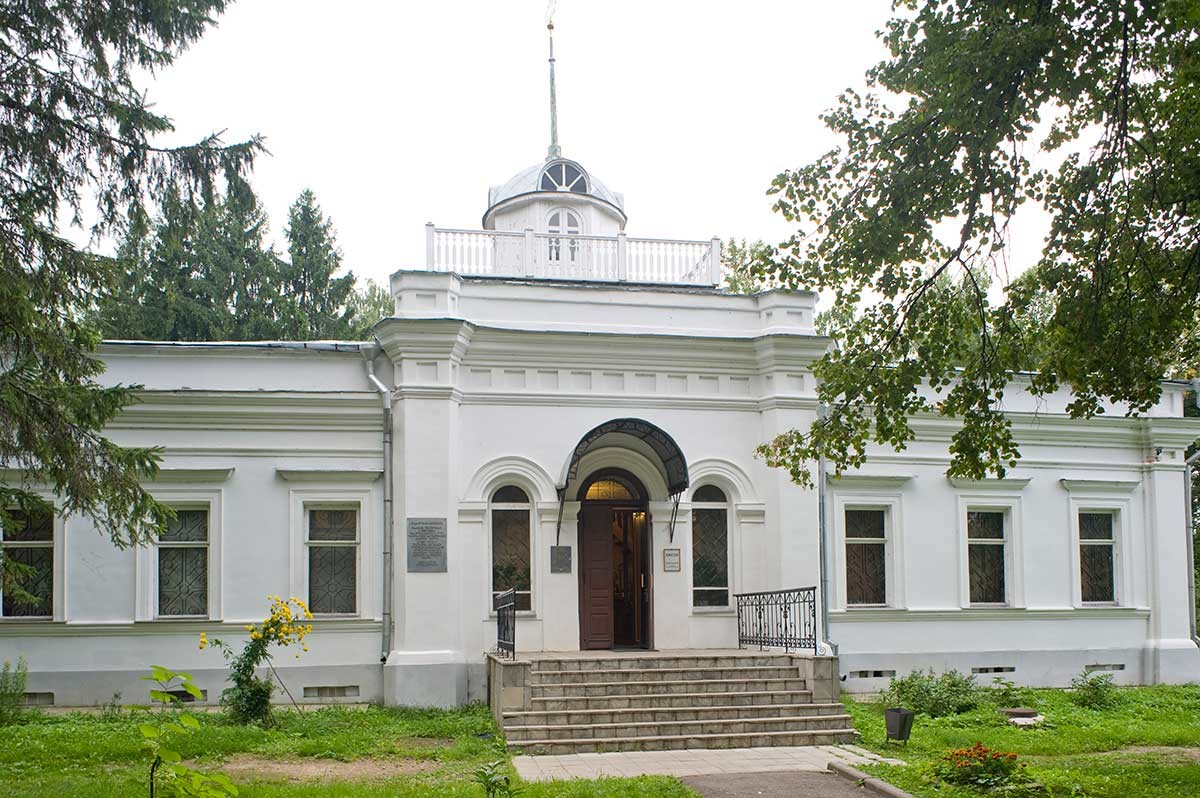 Still, little was done to prevent the effects of decay on the wooden buildings and boats. The culmination of the destruction was a fire that swept through Pereslavl in 1783 and destroyed all remaining vessels that had been stored near the boatyard on the Trubezh River. The aptly-named “Fortuna” survived by virtue of its storage at the Gremyach Hill site near Veskovo. 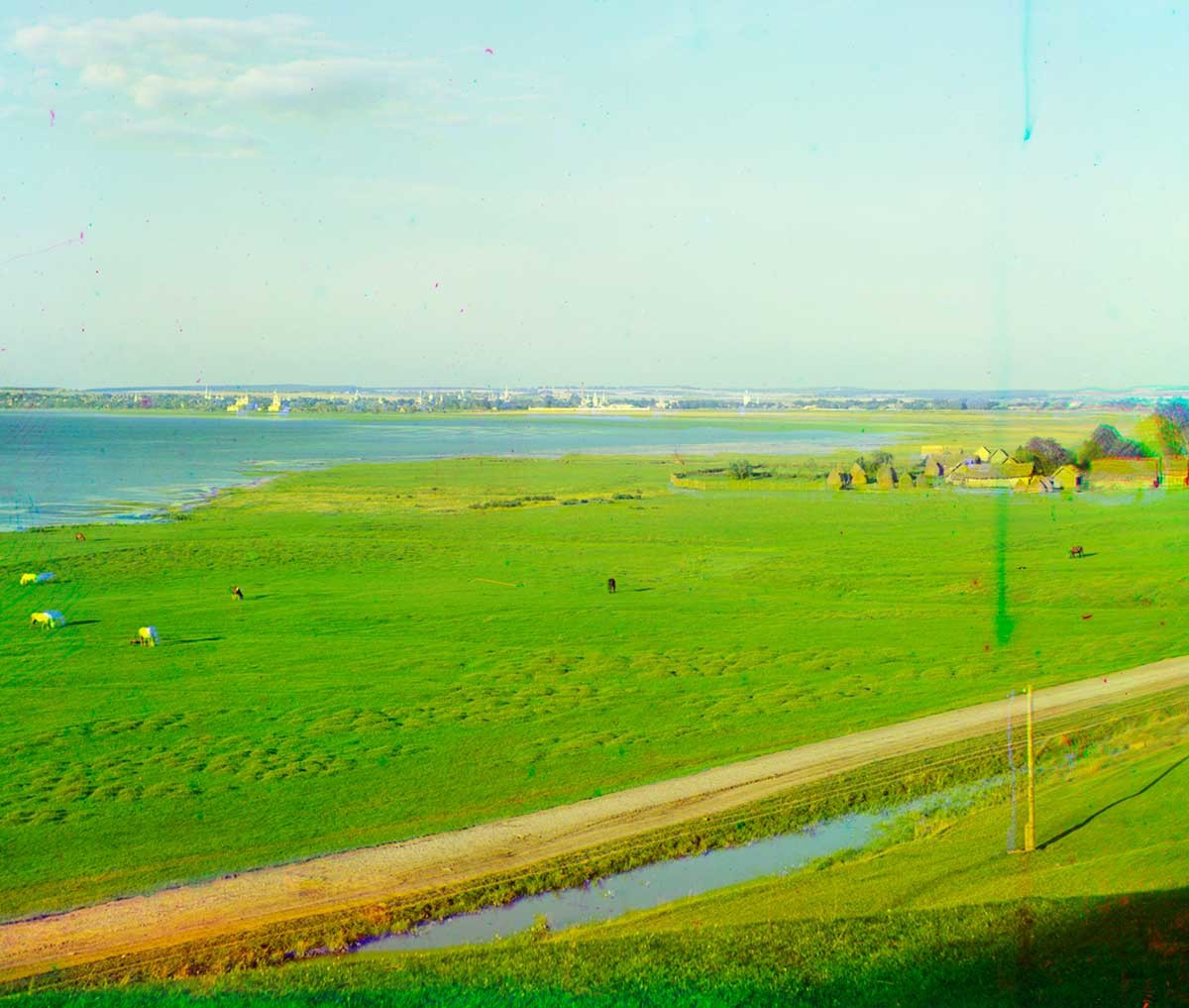 In 1802 Ivan Dolgorukov, the new governor of Vladimir Province, discovered “Fortuna” and proposed that the local nobility create a brick structure at Veskovo to house the boat for posterity. The dedication of the small structure in 1803 - the centenary of Peter’s founding of St. Petersburg—is considered Russia’s earliest regional history museum. 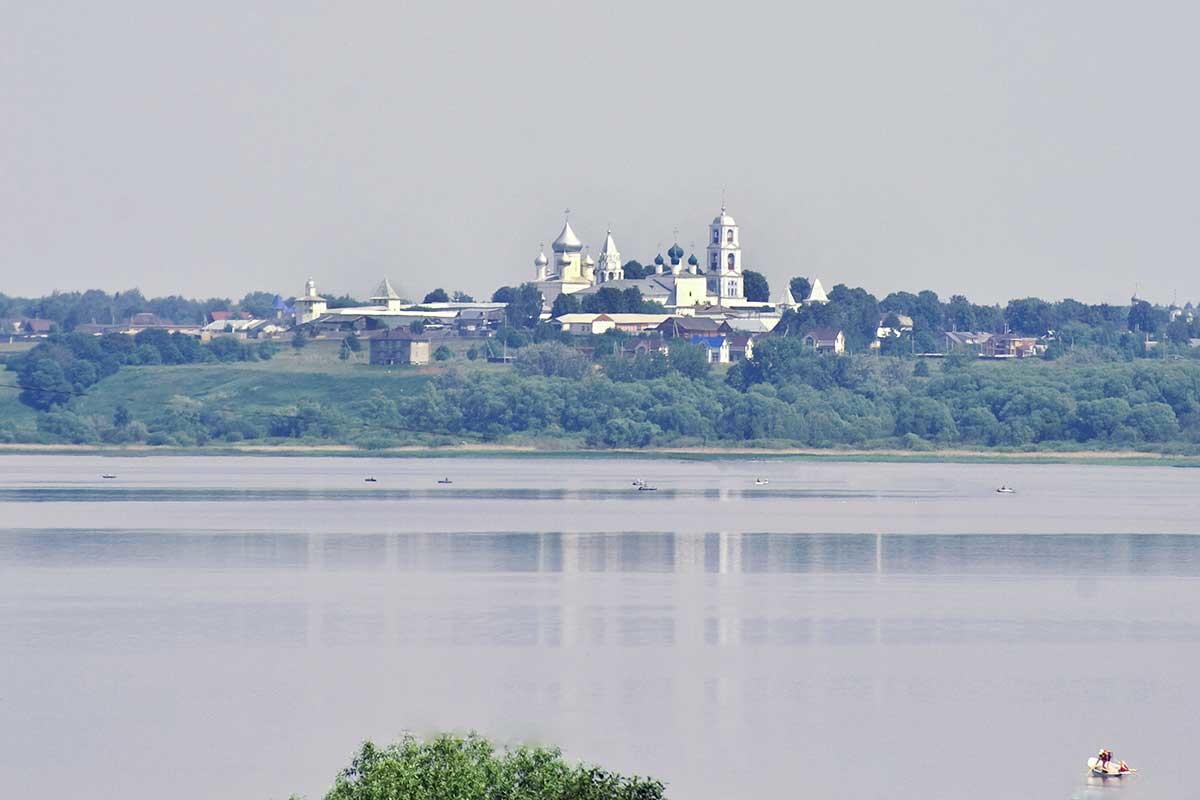 In August 1850 this shrine was visited by Grand Dukes Nicholas and Michael, sons of Nicholas I, who laid the foundation stone for a monument to Peter the Great overlooking Pleshcheyevo Lake. Designed by the Moscow architect Peter Campioni, the obelisk of red Finnish granite was dedicated in August 1852, Bronze letters on one façade display Peter’s 1722 instruction to preserve the flotilla. A triumphal arch was also erected in August 1852 at the estate entrance. 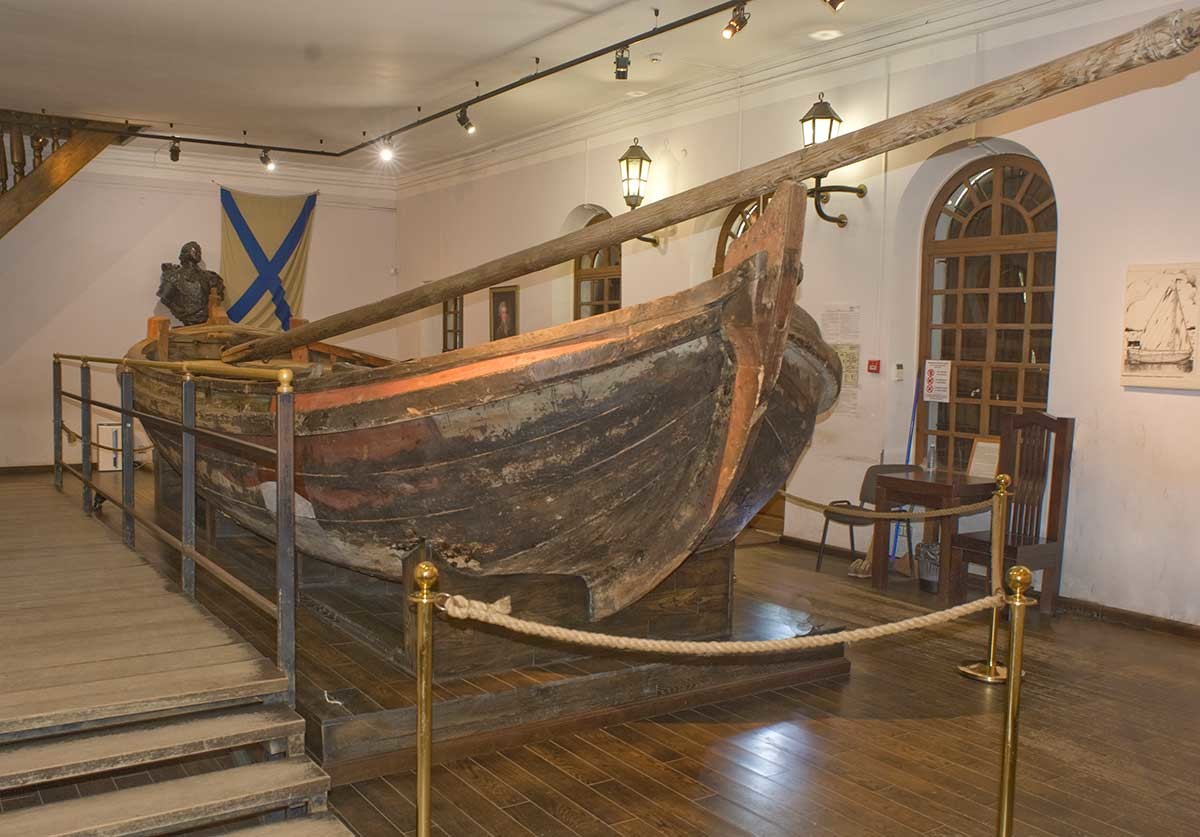 The culminating component of the Veskovo museum ensemble was the White Palace, built in 1853 with donations from local nobility and merchantry. Originally used as a social center, the building now houses major museum displays.

Through all of the upheavals of the 20th century the museum ensemble at Veskovo, so carefully photographed by Prokudin-Gorsky, has remained intact as a memorial to one of the defining events in Russia’s development.

In the early 20th century the Russian photographer Sergei Prokudin-Gorsky devised a complex process for color photography. Between 1903 and 1916 he traveled through the Russian Empire and took over 2,000 photographs with the process, which involved three exposures on a glass plate. In August 1918, he left Russia and ultimately resettled in France with a large part of his collection of glass negatives. After his death in Paris in 1944, his heirs sold the collection to the Library of Congress. In the early 21st century the Library digitized the Prokudin-Gorsky Collection and made it freely available to the global public. Several Russian websites now have versions of the collection. In 1986 the architectural historian and photographer William Brumfield organized the first exhibit of Prokudin-Gorsky photographs at the Library of Congress. Over a period of work in Russia beginning in 1970, Brumfield has photographed most of the sites visited by Prokudin-Gorsky. This series of articles juxtaposes Prokudin-Gorsky’s views of architectural monuments with photographs taken by Brumfield decades later.