Fortress cathedral in the Russian North: The Dormition Church in Belozersk 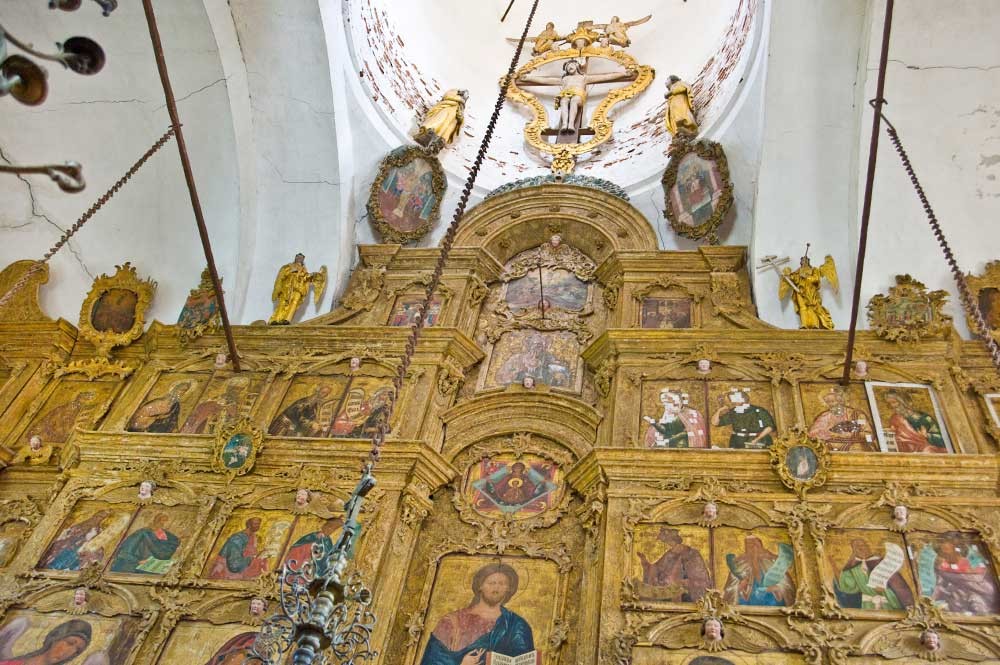 The small but active port of Belozersk, situated on the south shore of White Lake, has been a notable stop on river voyages to the northwest of Moscow from ancient times to the present day. It was an important destination for Russian photographer and chemist Sergei Prokudin-Gorsky (see box text below) as he explored the waterways of the Russian empire in Summer 1909 with support from the Ministry of Transportation. My work in the area began in the 1990s and continues to the present.

Belozersk is one of the earliest historically attested towns in Russia, first mentioned under 862 in the ancient chronicle "Tale of Bygone Years."  The details of its origins are lacking, and in fact its location changed more than once. The town occupied its current location in the late 14th century. 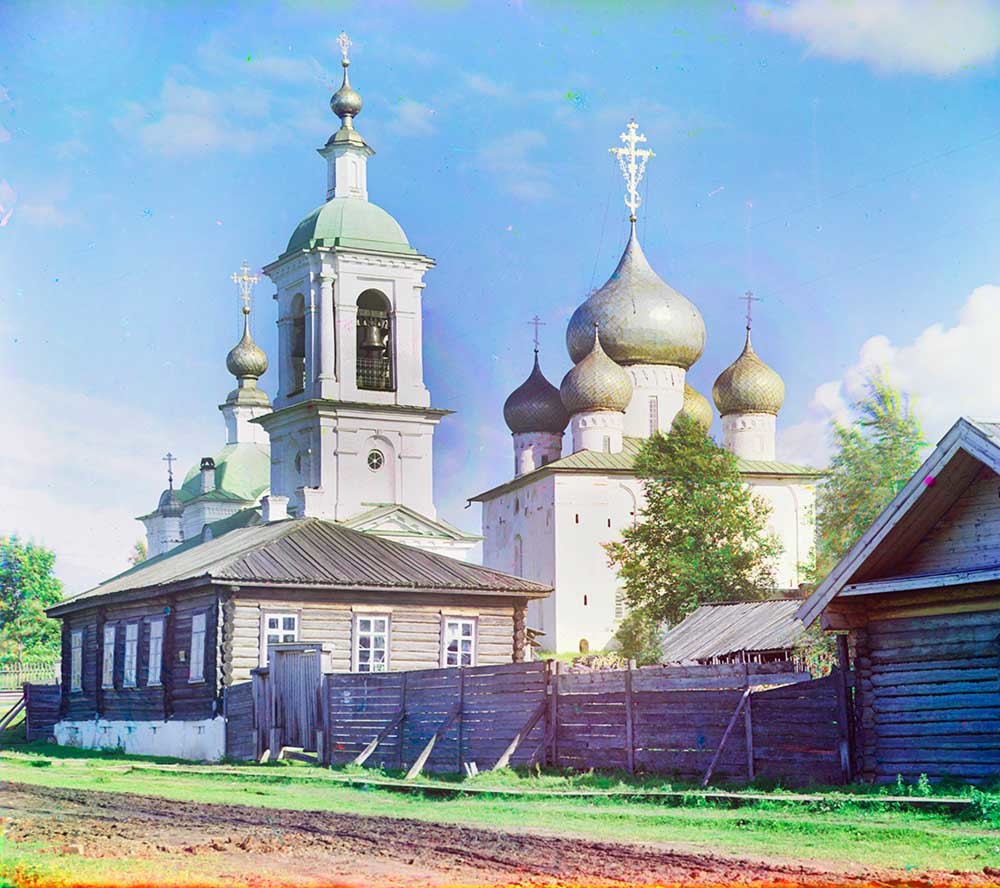 As Moscow’s power increased in the 15th century, the new town - then known as Beloozero - gained importance as a bulwark on Muscovy’s northwestern water transportation routes. Ivan III (the Great), a skilled ruler keen on expanding his holdings, understood the strategic significance of this location. After acquiring Beloozero in 1487, he constructed a large fortress, whose earthen ramparts still stand.

The town prospered during the middle of the 16th century, particularly as a source of fish and iron goods made from nearby bog iron. An impressive reminder of that wealth is the fortress-like Church of the Dormition of the Mother of God, begun in 1553 at one of the town’s highest points. 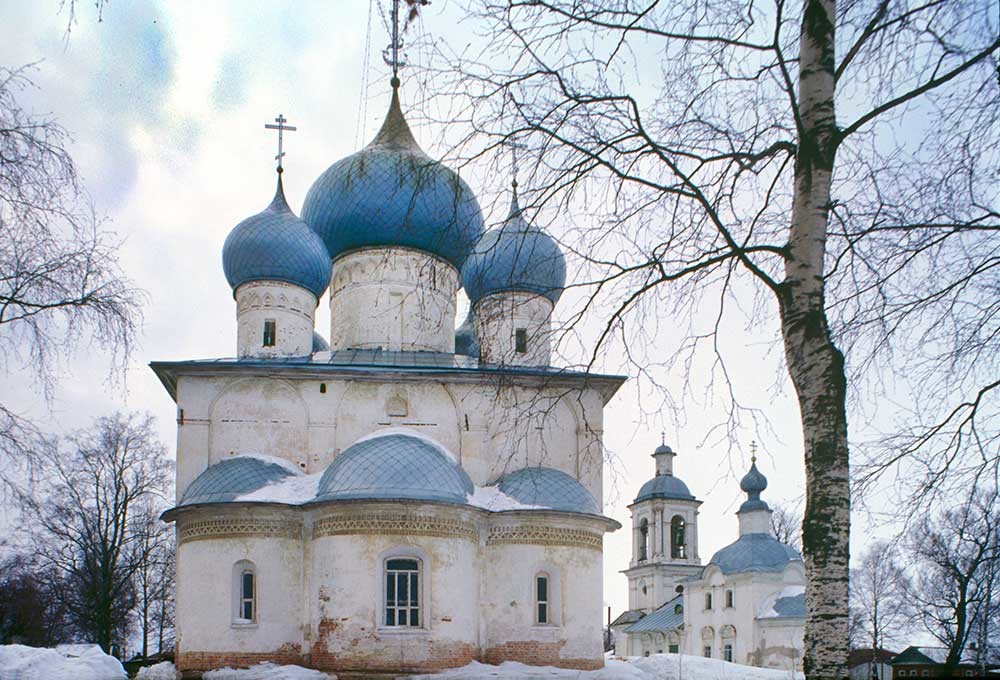 Often referred to as a sobor (cathedral), the Dormition Church was initiated by Ivan the Terrible on the site of an earlier convent with the same name. It was the town’s first masonry structure, built of brick on a rough stone foundation.

As is usually the case in pre-modern Russian architecture, the identity of the architects is a matter of conjecture. One document refers to builders from Rostov the Great. The same document indicates that the builders modeled the structure on the Dormition Cathedral at the nearby Saint Kirill Belozersk Monastery, although there are substantial differences between the two churches. 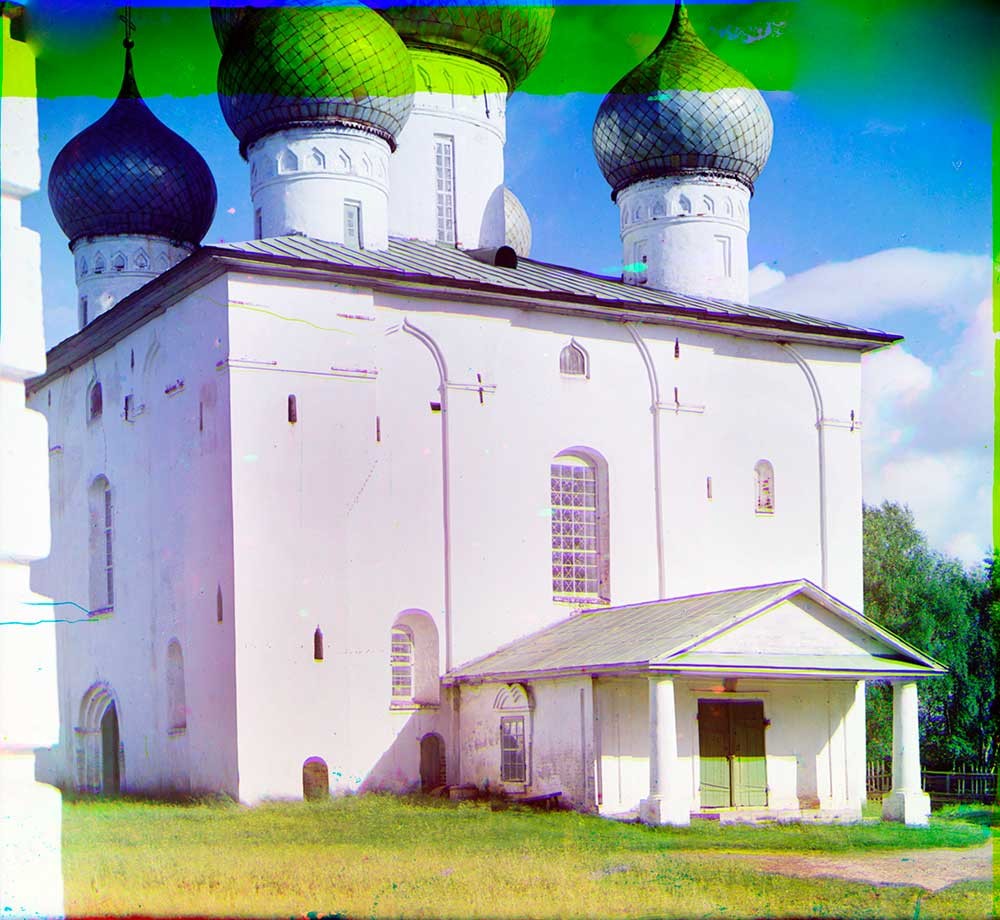 The Dormition Church follows a typical plan with four interior piers supporting the roof. The exterior decoration is laconic, with simple portals and window surrounds. The façade is vertically segmented by large pilaster strips.

The only obvious decorative touch is the brick patterns at the base of the five massive cupolas, which probably acquired their flared form much later. There is reason to assume that the roof line originally followed the arched gables (zakomary). The initial roof was probably made of wooden shingles characteristic for brick churches during this period.

Interestingly, the simple, massive form of the exterior - beautifully captured in Prokudin-Gorsky’s view in the afternoon sun – creates the impression of a medieval donjon, or “keep”. This impression is particularly evident in the treatment of the west corners of the upper structure. 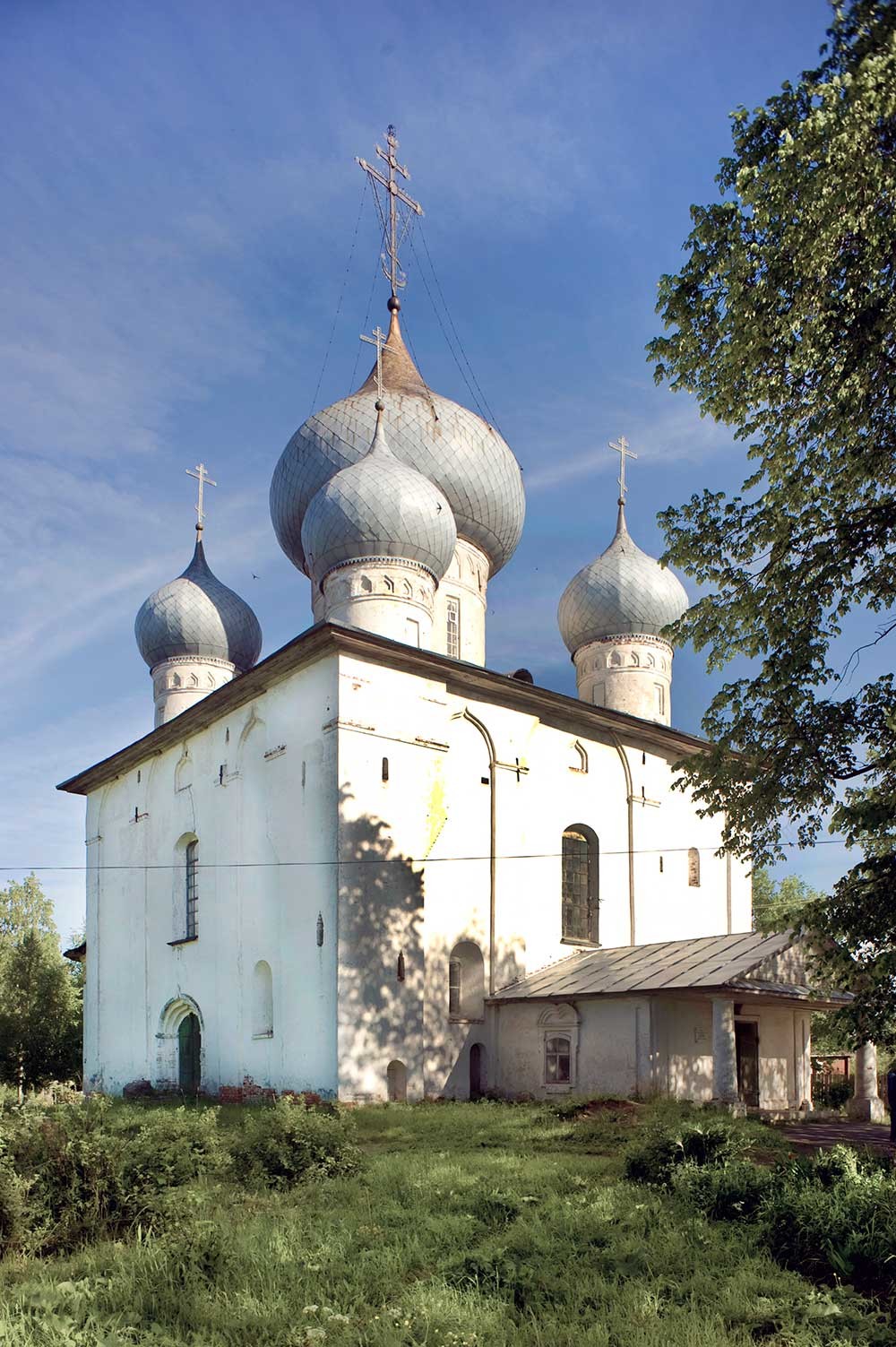 The upper level of the southwest corner (on the right side in our photographs) contained a small secondary altar dedicated to Metropolitan Aleksy, a prominent 14th-century church prelate who did much to consolidate Moscow’s power. This “chapel” was reached by narrow stairs set within the thick west and south walls.

The northwest corner is even more complex. Its stairs - within the west and north walls - led to an upper space that supported a bell gable, or zvonnitsa. This curious perch was reinforced by thickening the upper walls and pilasters with projecting layers of bricks. 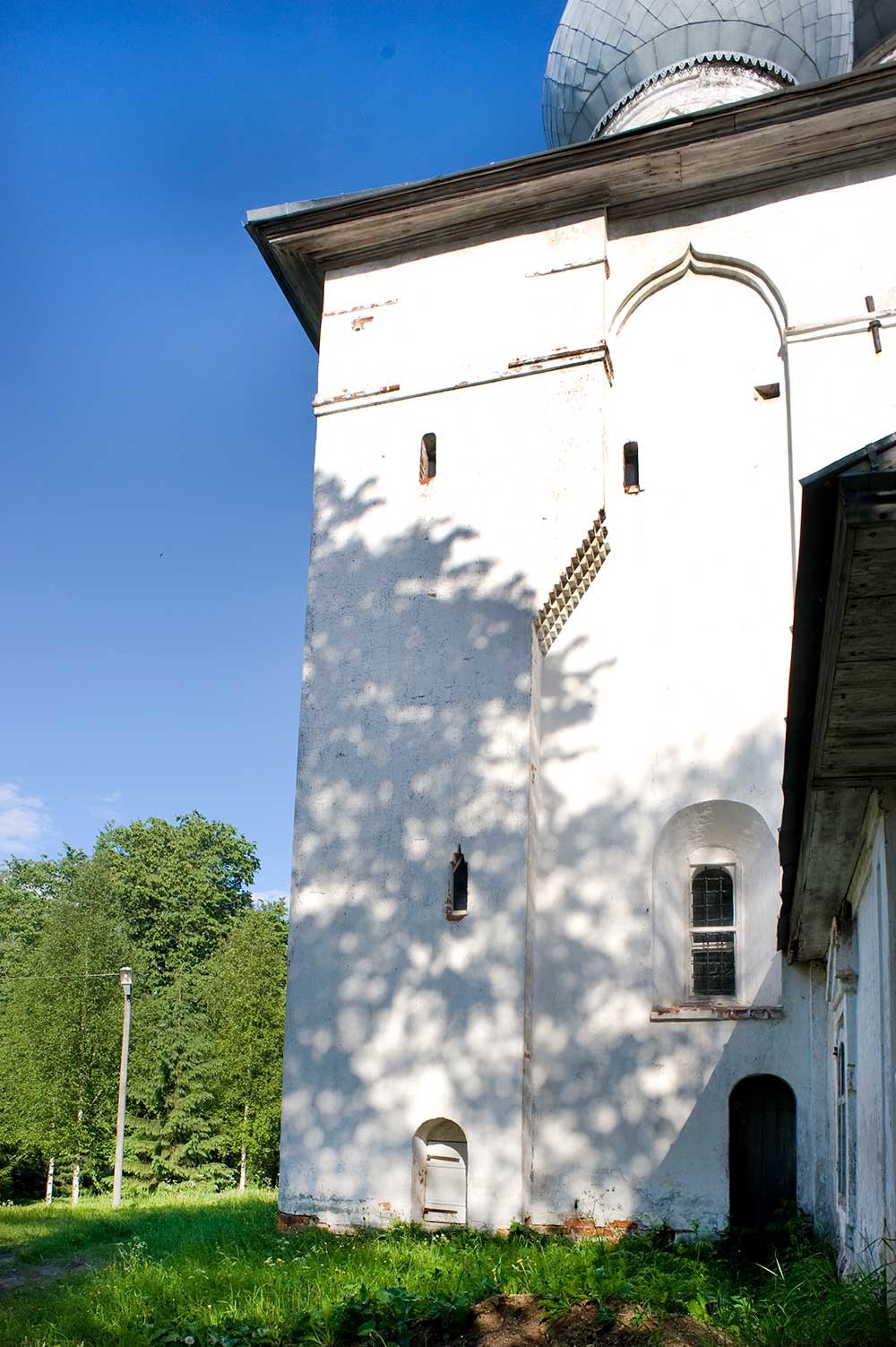 This northwest corner also has narrow angled windows reminiscent of gun ports. There is no documentary evidence that the church was designed to serve a defensive role, yet its reinforced construction on the west side suggests that the structure, located on a prominent hill, could be used as a lookout post. 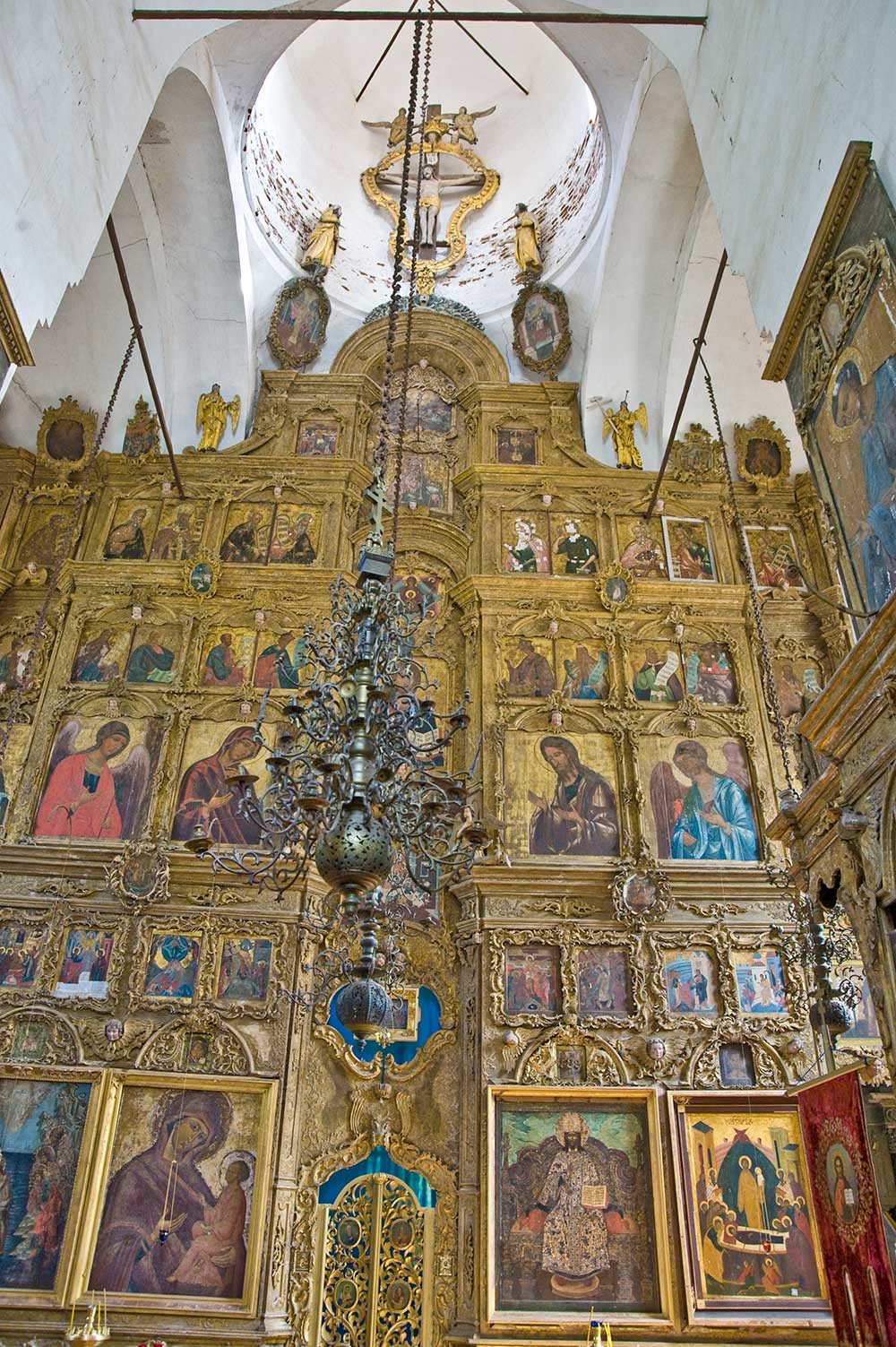 The austerity of the church exterior belies the splendor of its interior, which sadly Prokudin-Gorsky apparently did not photograph. Here we see not a display of colorful frescoes, but a grand icon screen, created as part of a renovation of the church toward the end of the 18th century when the roof line was leveled and the windows were enlarged.

Many of the large icons in the first, ‘local’ row predate the icon screen itself. For the most part, however, the icons in this baroque masterpiece were painted in an 18th-century academic style. 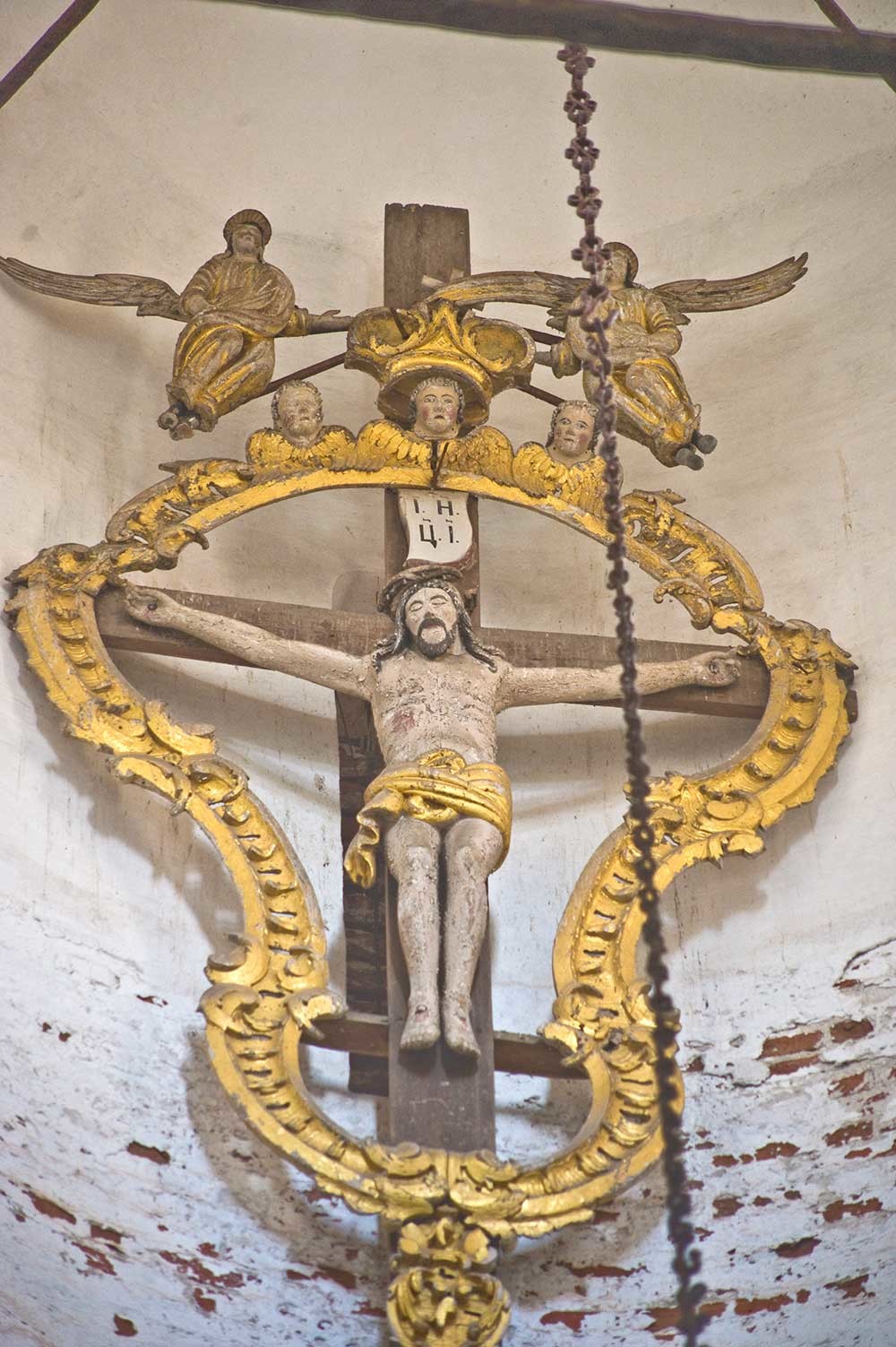 Church of the Dormition. Crucifix above icon screen. Photo: August 2009

The structure of the iconostasis is traditional and impresses with its sheer size as well as its luxuriant display of carved baroque ornament. It seems to enlarge the very space of the church itself as it soars toward the crucifix in the cylinder supporting the central dome. No other church interior in Belozersk is this well preserved. 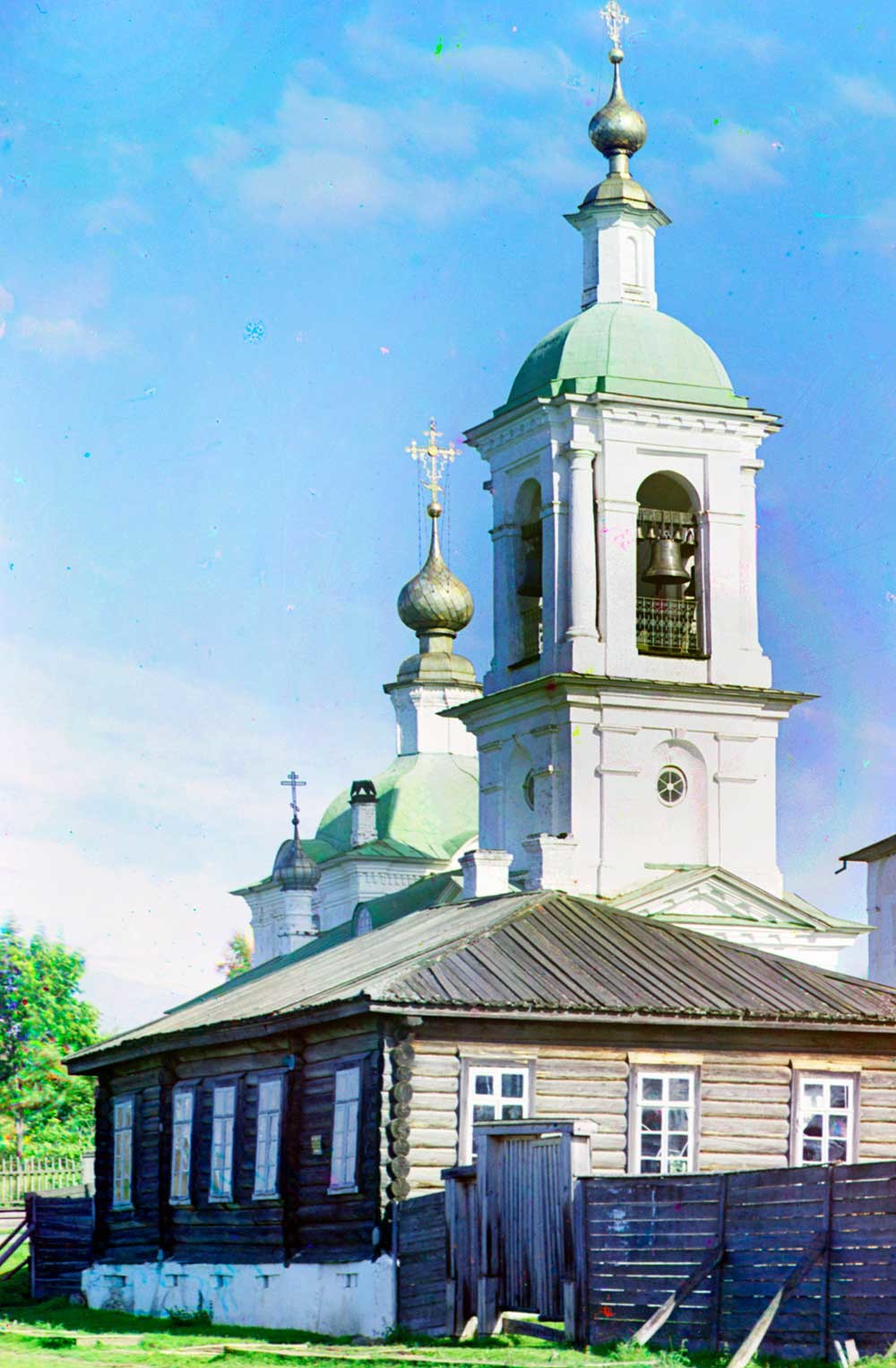 Prokudin-Gorsky also photographed the adjacent Church of the Epiphany, built in 1787 as a “winter” church, whose smaller space could be heated for worship during the cold months. (The capacious interior of the Dormition Church would be very difficult to heat in severe cold.) 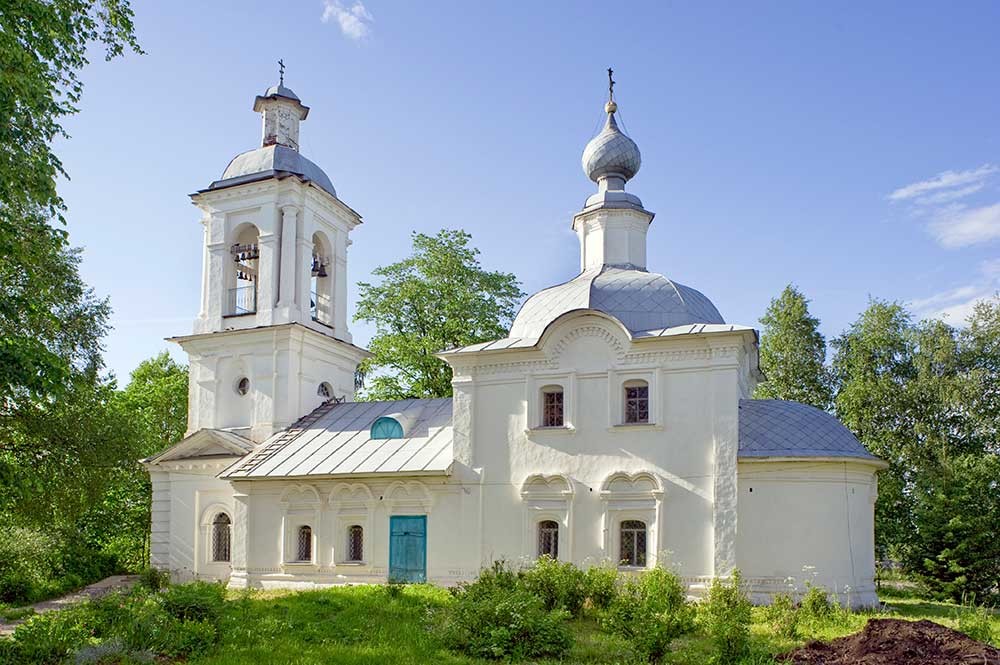 The archaic style of the Epiphany Church combines simplified 18th-century baroque elements with a 17th-century plan. The bell tower at the west end is attached to a vestibule leading to the main space and altar sanctuary at the east end. 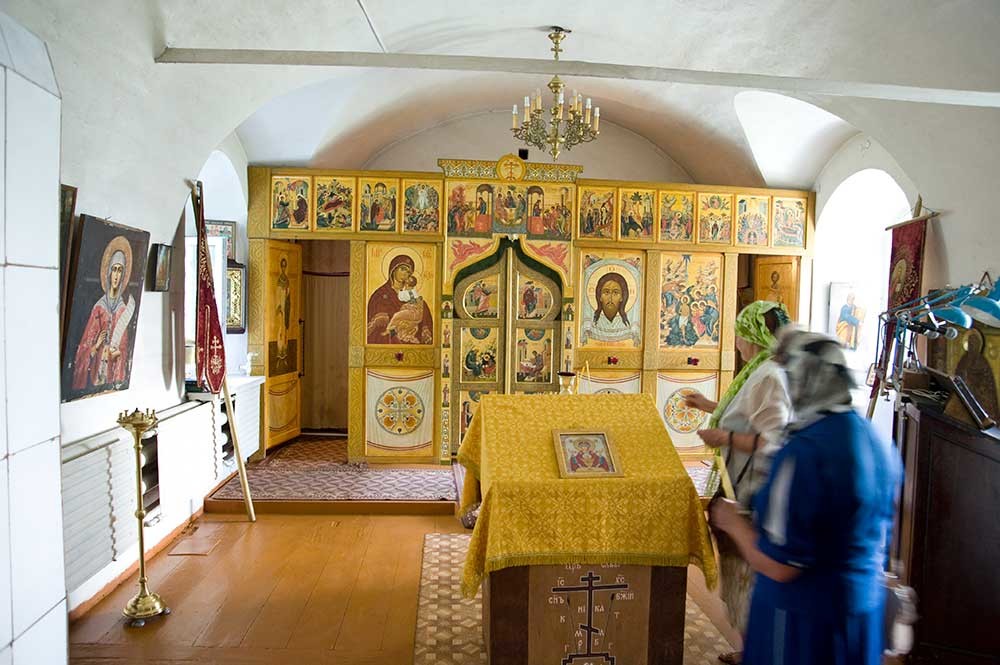 The interior of the Epiphany Church has an unusual, distribution of space on two levels. The main altar, located on the ground level, could be used for worship throughout the year. The upper, unheated space contained a secondary altar dedicated to Saint Dimitry of Rostov and could only be reached through the bell tower along a passage above the ceiling of the lower vestibule.

Both these churches were closed during the 1930s. Fortunately, the Dormition Church was transferred to the local museum, which preserved its interior from the damage suffered by most other churches in Belozersk. 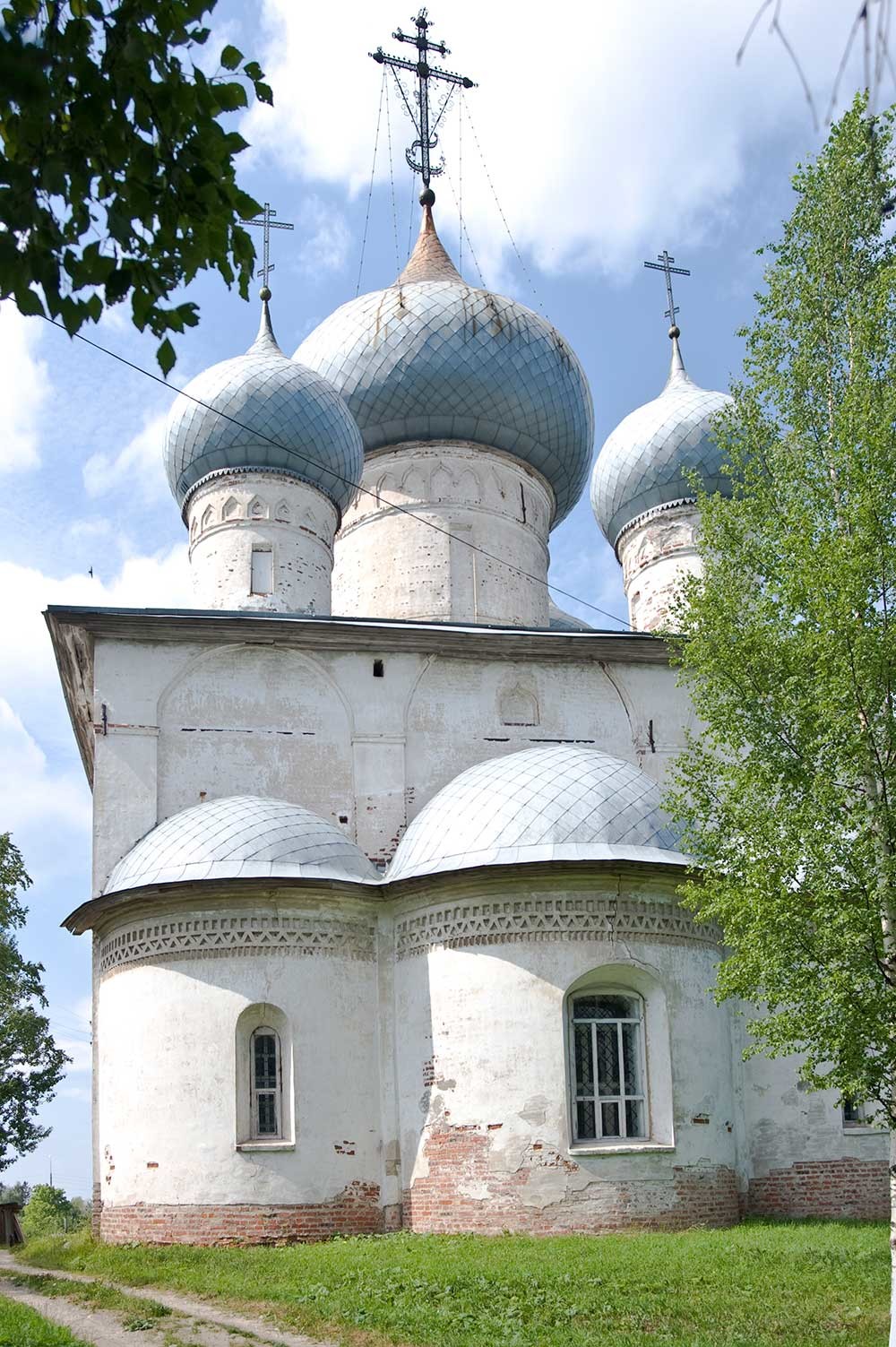 During the mid-1940s both churches were reopened as part of the temporary Soviet policy of rapprochement with the Orthodox Church during the war. As cultural and spiritual landmarks, they remain the primary active churches in Belozersk to this day.

In the early 20th century the Russian photographer Sergei Prokudin-Gorsky developed a complex process for color photography. Between 1903 and 1916 he traveled through the Russian Empire and took over 2,000 photographs with the new process, which involved three exposures on a glass plate. In August 1918 he left Russia with a large part of his collection of glass negatives and ultimately resettled in France. After his death in Paris in 1944, his heirs sold his collection to the Library of Congress. In the early 21st century the Library digitized the Prokudin-Gorsky Collection and made it freely available to the global public. Russian websites now have versions of the collection. In 1986 the architectural historian and photographer William Brumfield organized the first exhibit of Prokudin-Gorsky photographs at the Library of Congress. Over a period of work in Russia beginning in 1970, Brumfield has photographed most of the sites visited by Prokudin-Gorsky. This series of articles juxtaposes Prokudin-Gorsky’s views of architectural monuments with photographs taken by Brumfield decades later.