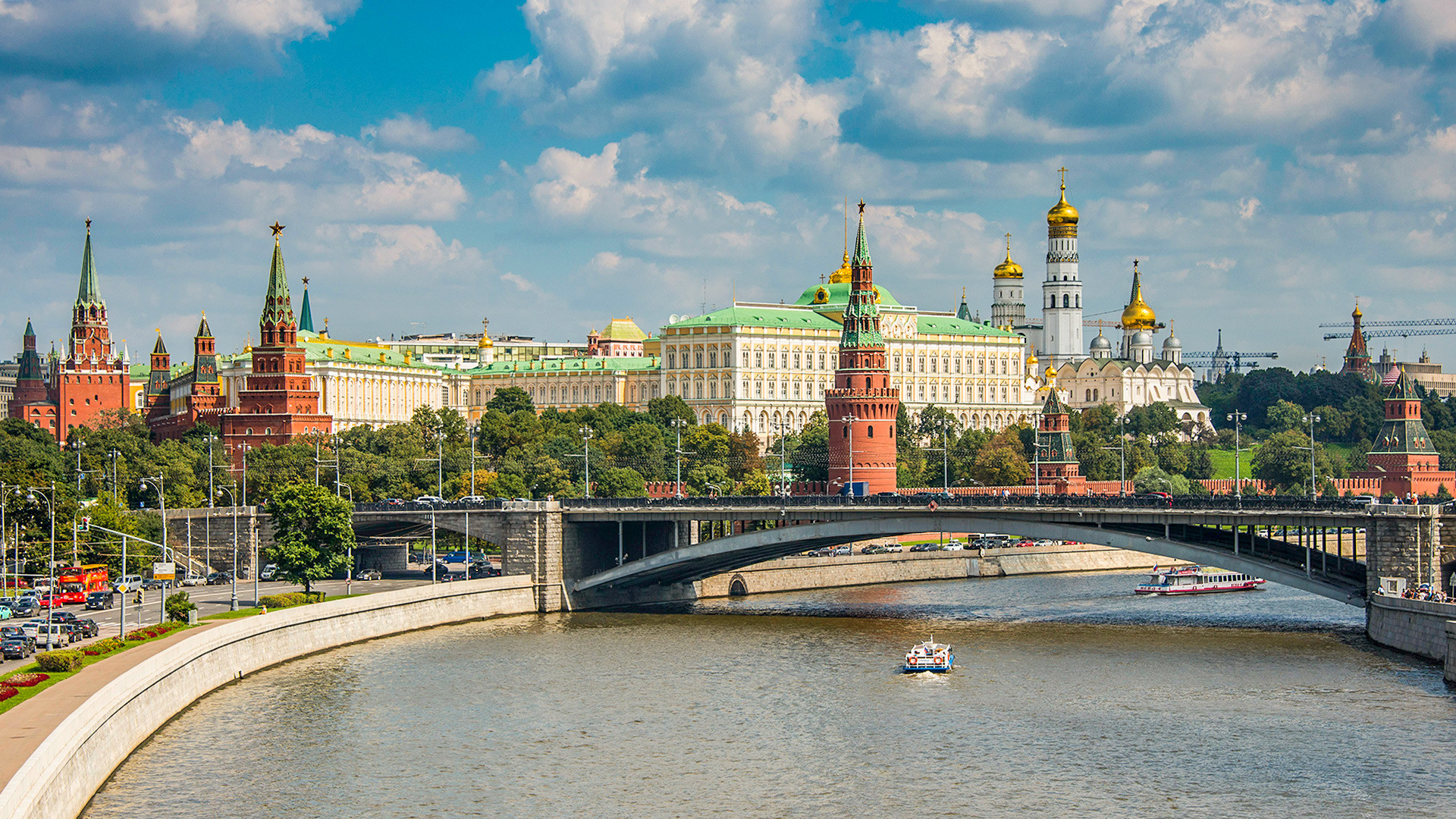 Michael Runkel/Global Look Press
Moscow’s famous Kremlin is a world-recognised symbol of Russia, and behind virtually every one of its exotic spires there is an interesting story.

1. Italians were responsible for building most of the Kremlin’s towers 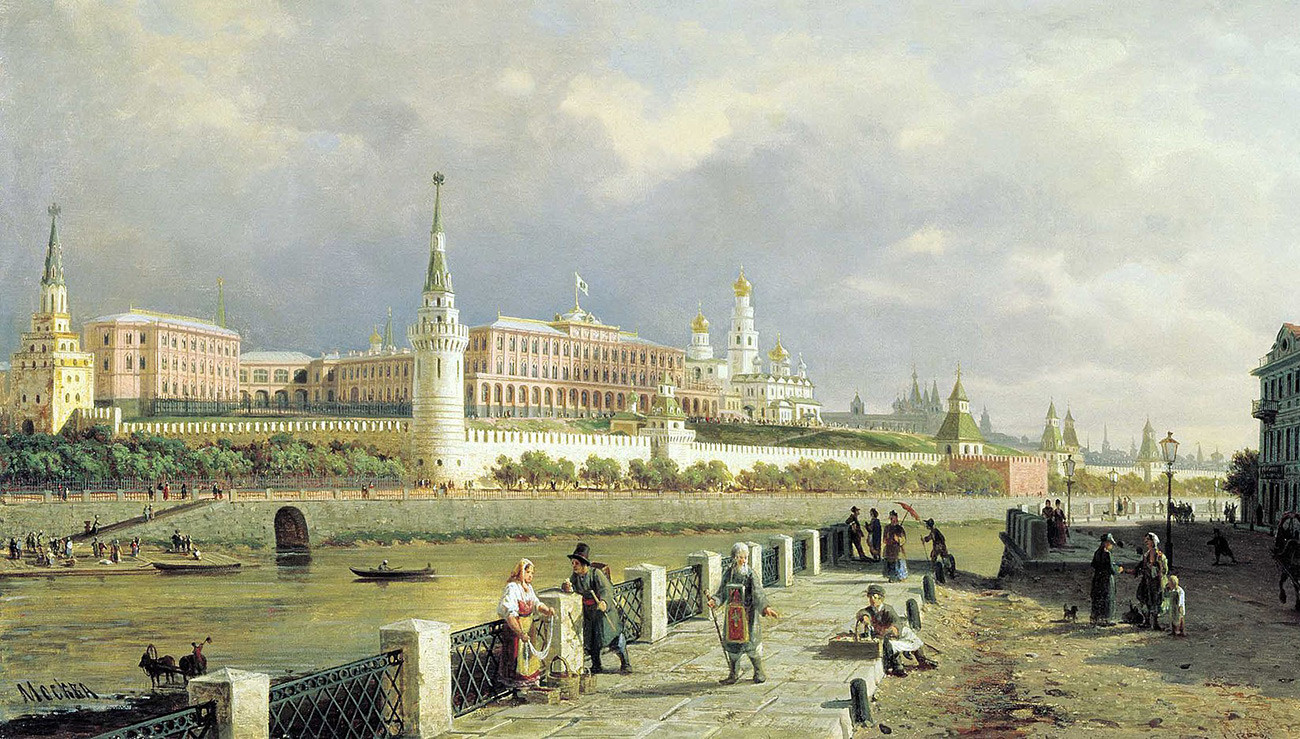 Inviting Italian architects to design buildings not only stable but beautiful was common in Moscow Rus (modern Russia’s predecessor state that existed between the 15th and 16th century). Ivan III (1462–1505), who rebuilt the Kremlin, changing it from its earlier white stone appearance to the characteristic red brick we know today, hired many Italians:  Aristotele Fioravanti, Aloisio da Milano, Antonio Gislardi, Pietro Antonio Solari – and it was they who designed and built the first Kremlin towers, as well as churches and palaces inside the fortress.

Fun fact: Russians of that time had trouble pronouncing Italian names, so most of those architects were known under the common surname of Fryazin (which basically meant ‘Italian’).

2. The Tainitskaya is the oldest tower 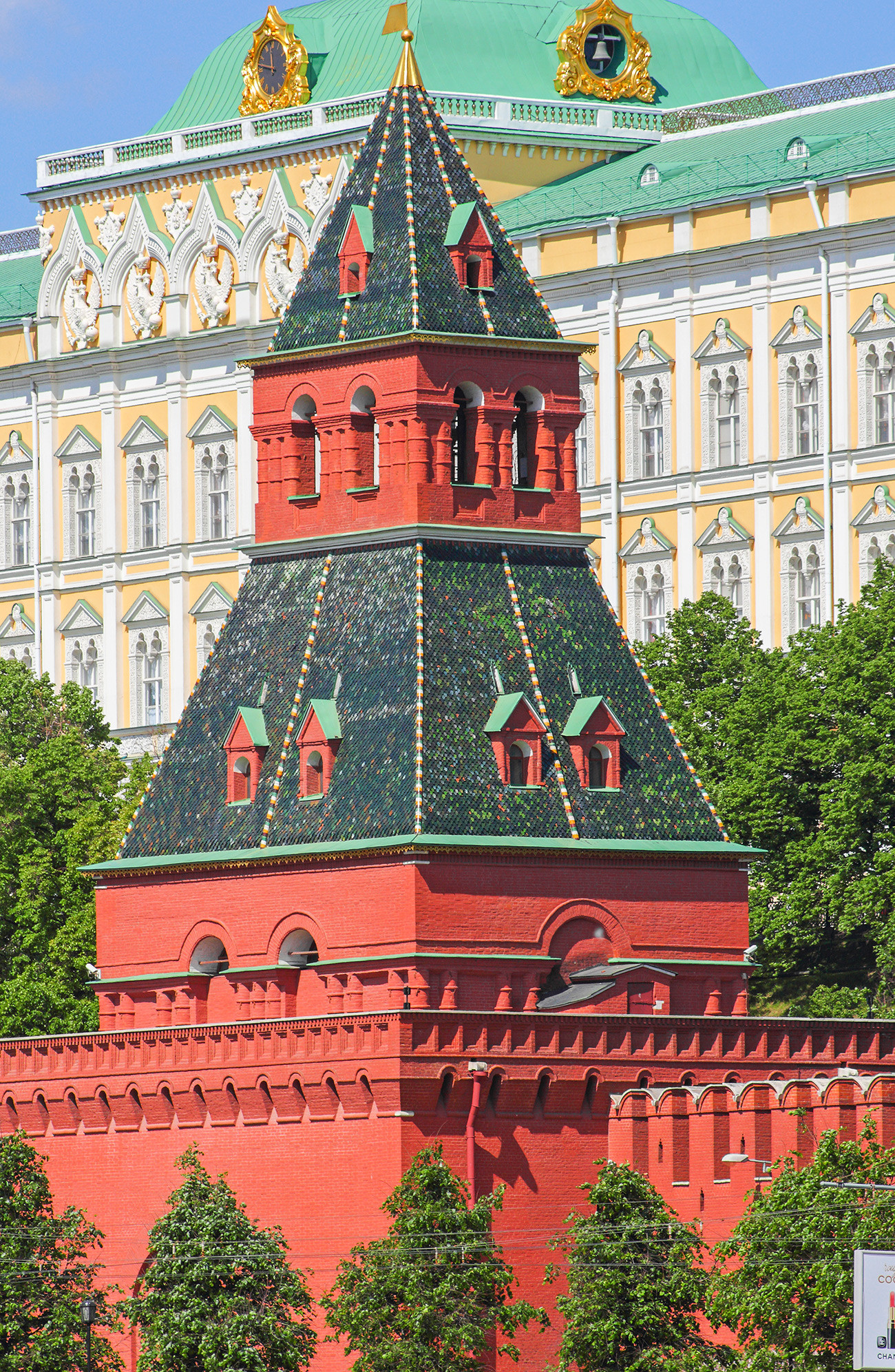 Quite a modest spire (not as famous as the Spasskaya, for instance), this tower was built first, in 1485. ‘Tainik’ means ‘a secret’ – the tower had a hidden path towards the Moskva River, through which the Kremlin's denizens could escape if the fortress fell to an enemy force.

3. On several towers icons were visible 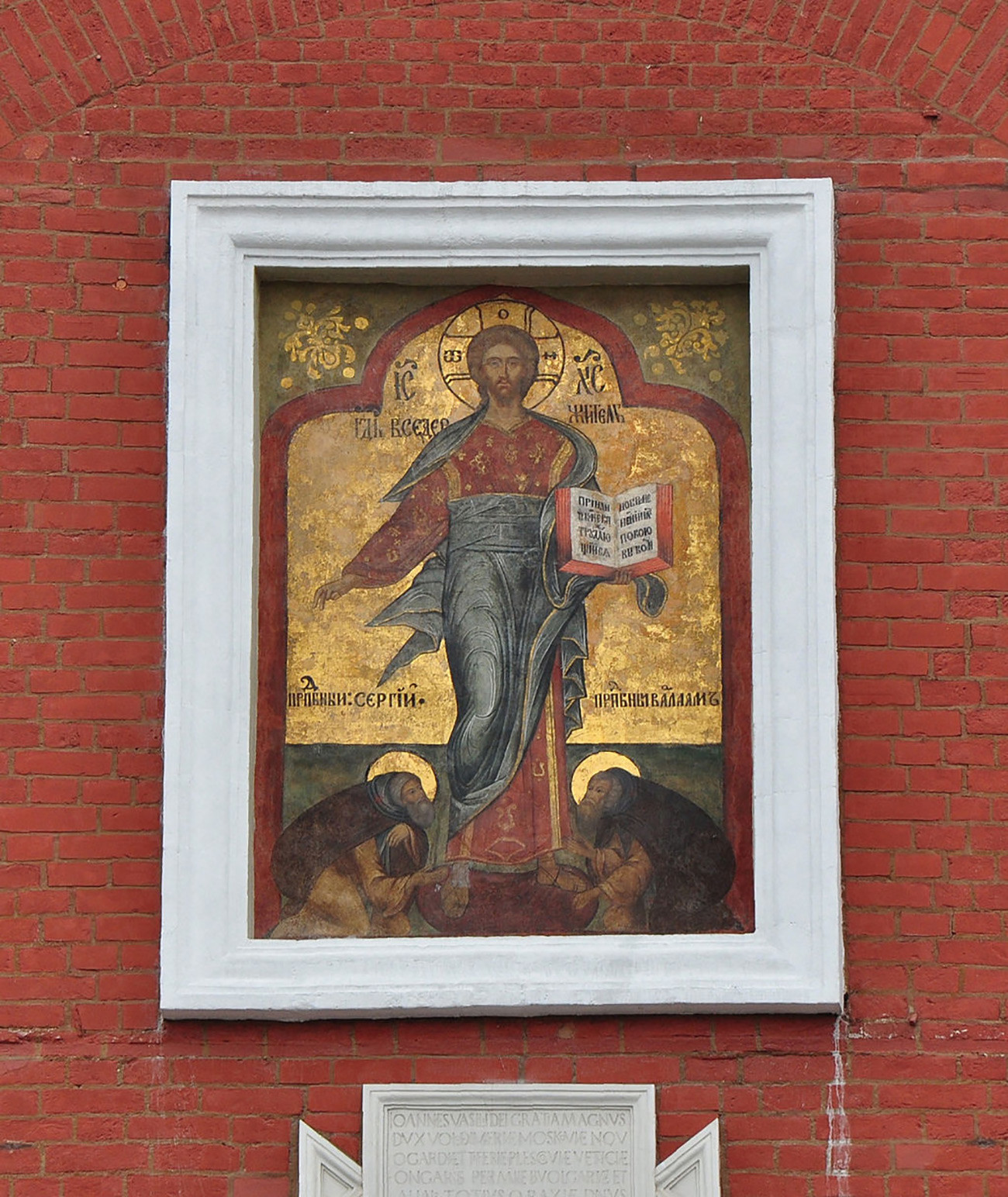 This comes as no surprise given the fact that Russia was a devout Christian nation before the October Revolution. Some towers, like the Spasskaya and Nikolskaya are named after saints or icons. While passing through gates at the Spasskaya, everyone was obliged to take off their hats as they passed under an image of Christ’s face on the outside of the tower.

You can still see icon cases (or the remnants of them) on several Kremlin towers – though the icons themselves, understandably, disappeared in 1917.

4. Napoleon blew up one of the towers. But failed to destroy the Kremlin 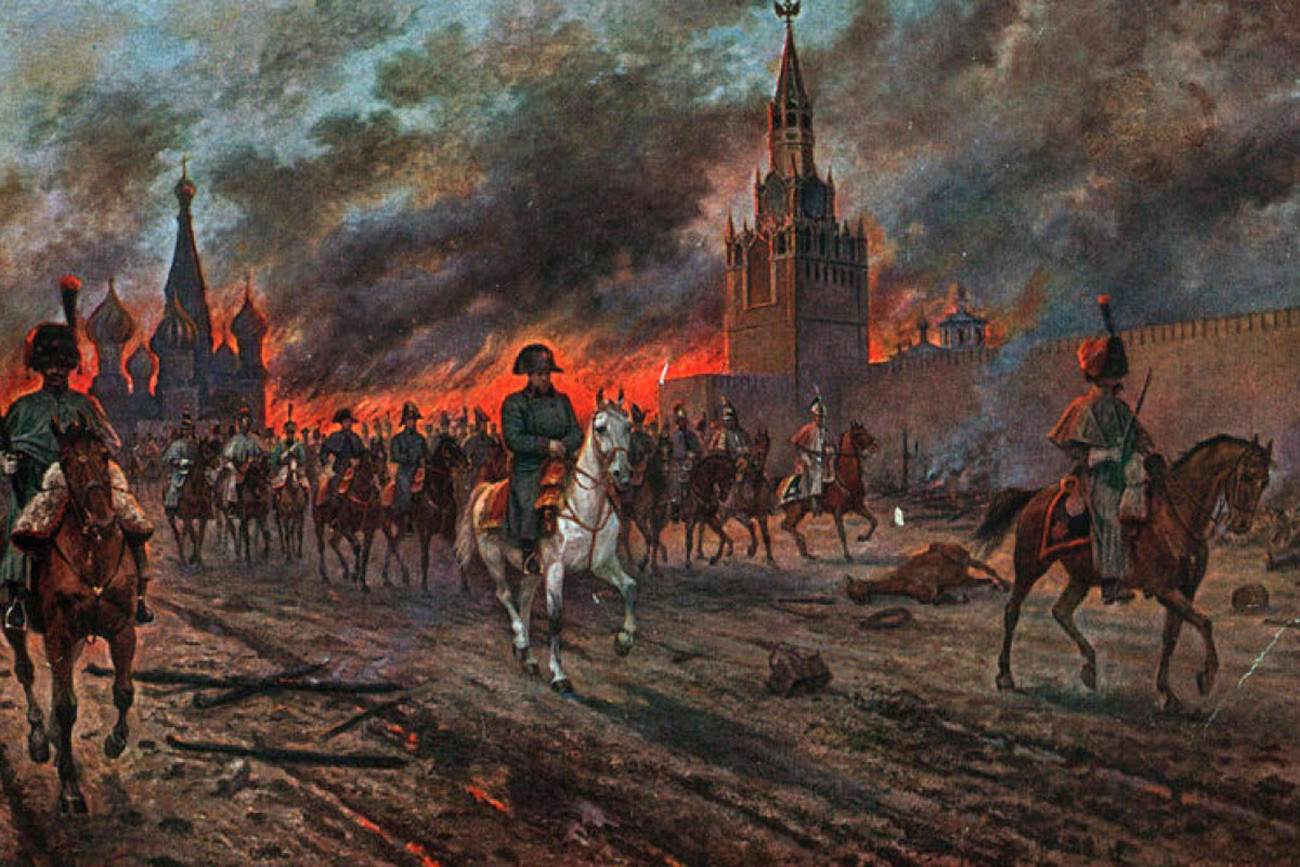 Napoleon was not pleased that he was forced to evacuate Moscow in 1812 (his army lacked reserves and was basically starving so he had to retreat), and so the French emperor ordered explosives to be placed around the Kremlin as a goodbye present to Moscow. Fortunately, the French failed: one tower (the Vodovzvodnaya) was totally destroyed, several others were severely damaged but most remained standing. Those damaged were rebuilt after the war.

5. Not every tower has a star on it 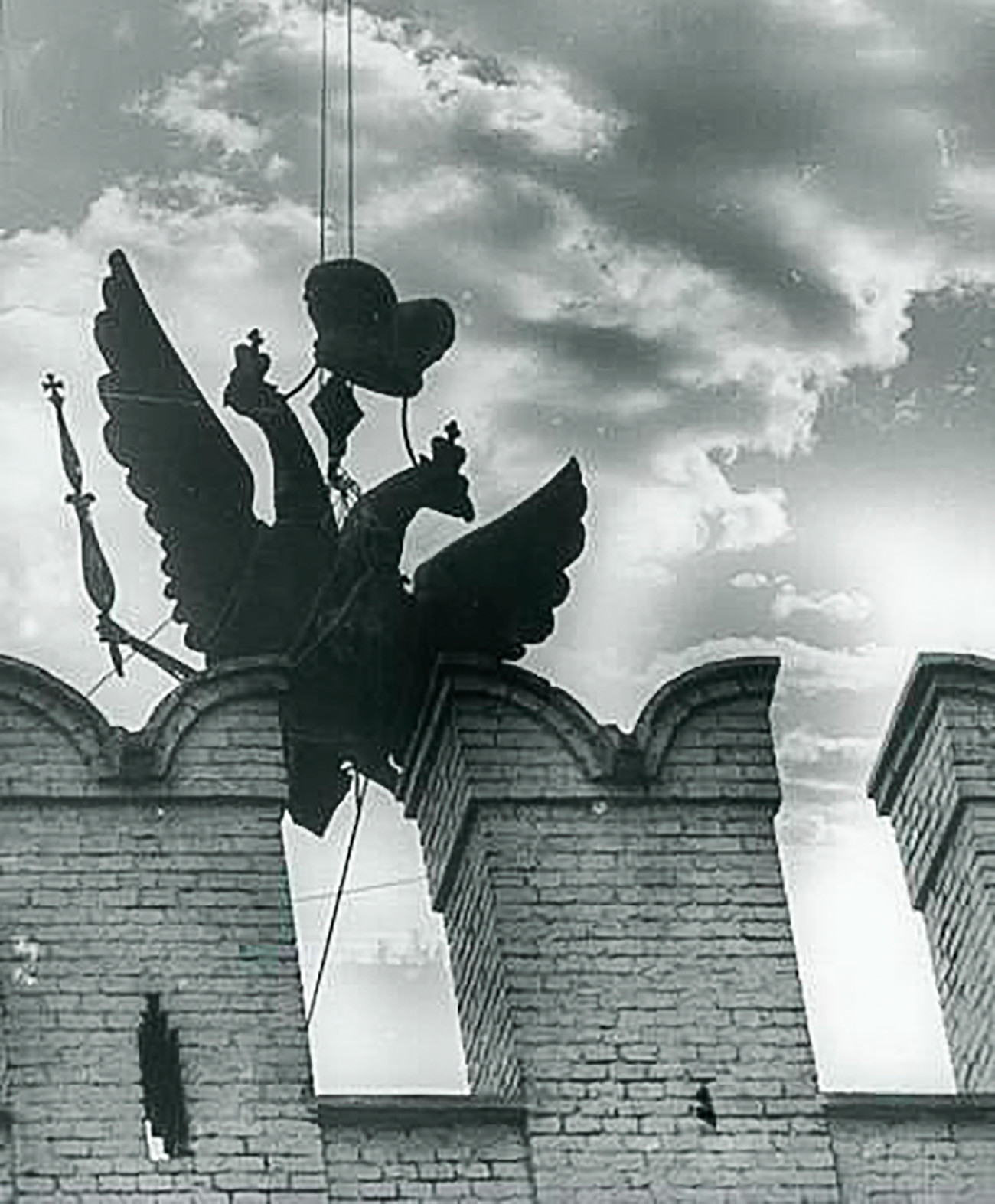 Red stars replaced the imperial two-headed eagles at the pinnacle of the Kremlin towers after the revolution. These stars became symbols of Russia themselves but only five towers carry them, the most prominent ones: the Borovitskaya, Troitskaya, Spasskaya, Nikolskaya and Vodovzvodnaya.

6. Most of the towers are four-sided (except for three) 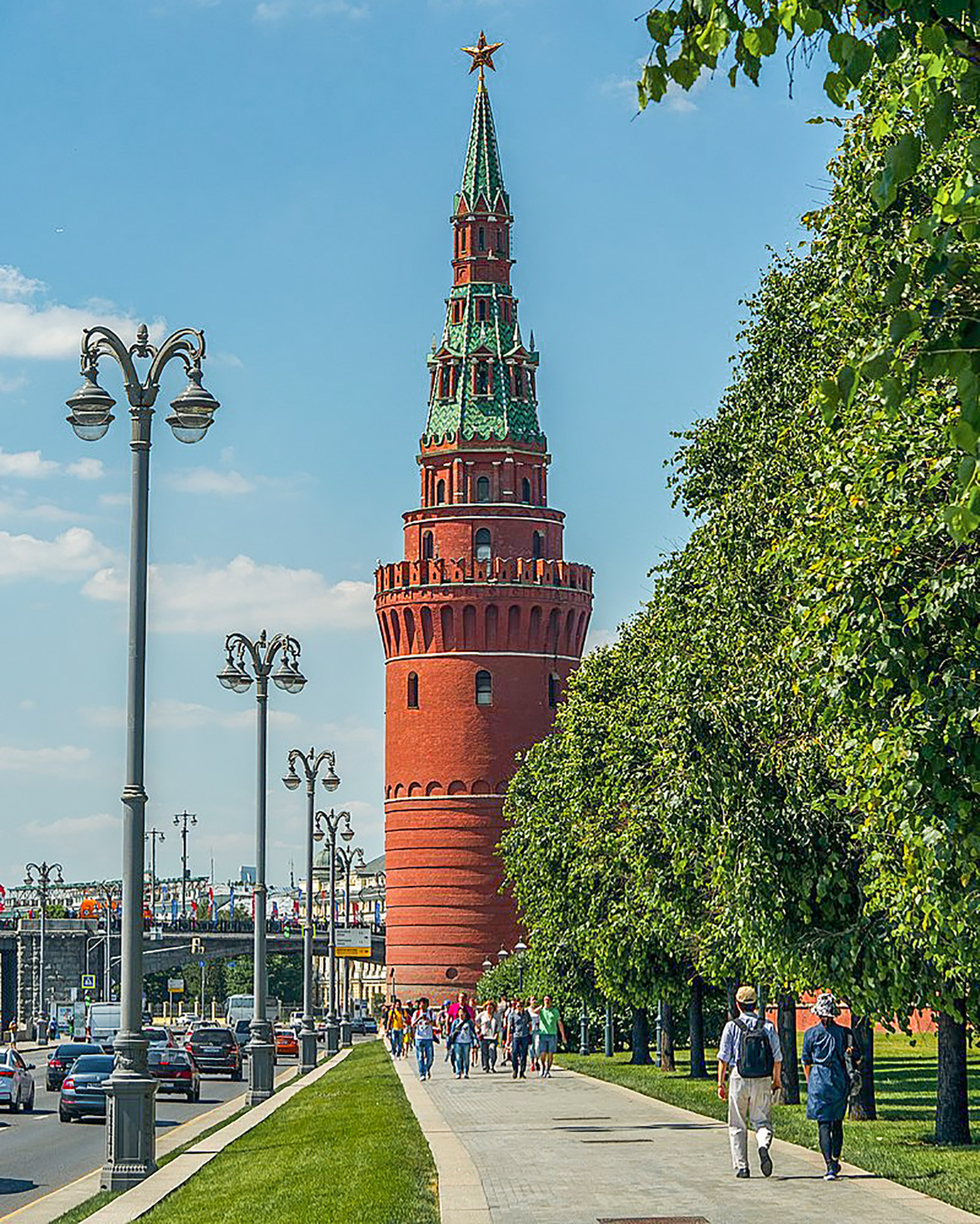 This makes sense: three corner towers, the most important pillars of Kremlin’s defense, were built in a round shape: the Vodovzvodnaya, Moskvoretskaya and Corner Arsenalnaya, while all the others are built inside the walls so they are four-sided.

7. One of them was named after an executed nobleman 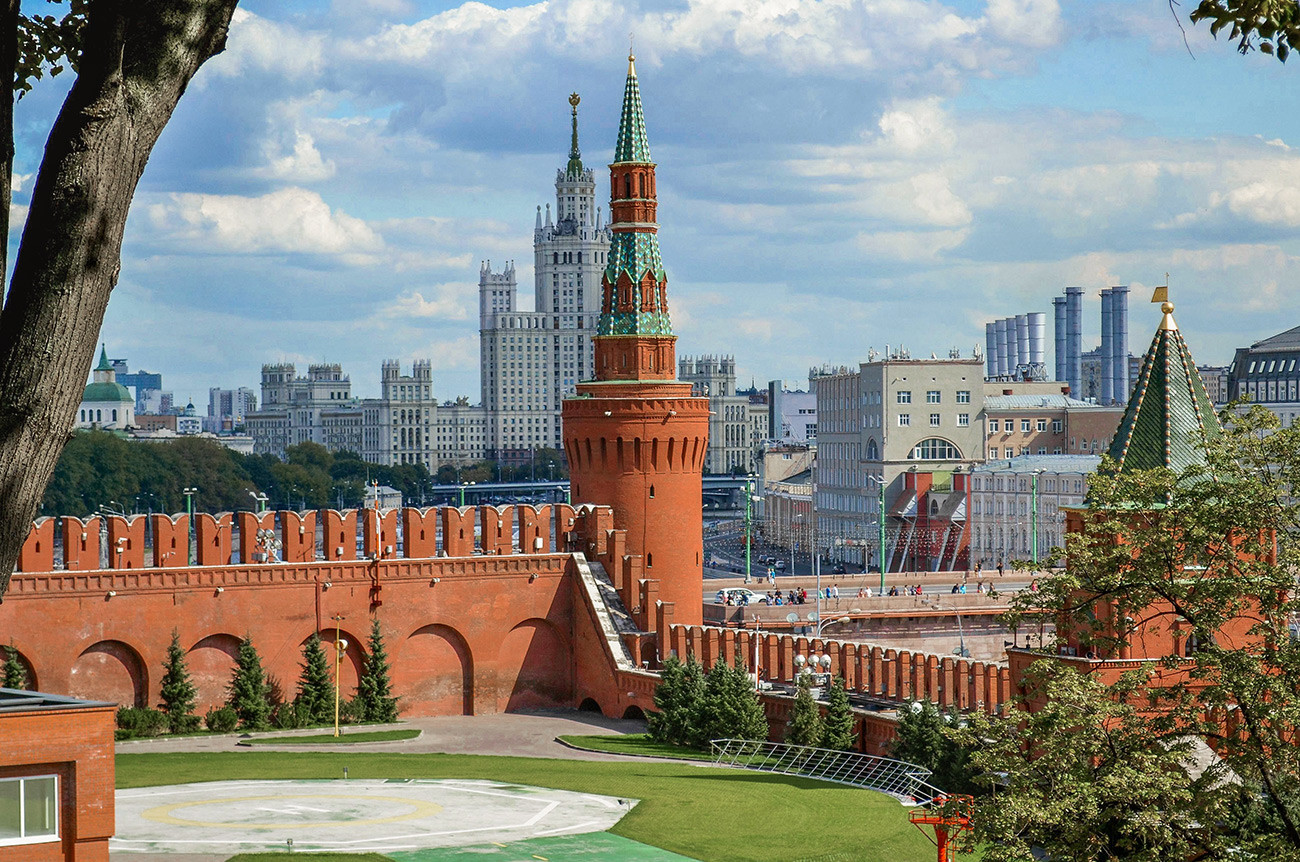 Beklemishevskaya tower is now better known as Moskvoretskaya (after the Moskva River) – but things were different in the 16th century. Ivan Beklemishev, a wealthy and influential boyarin (nobleman) had a house near the tower, inside the Kremlin, so they called it after him. But in 1525 Beklemishev fell out with Vasili III, Prince of Moscow, so the ruler had him executed. The name, however, stuck.

8. The Spasskaya is the most famous one 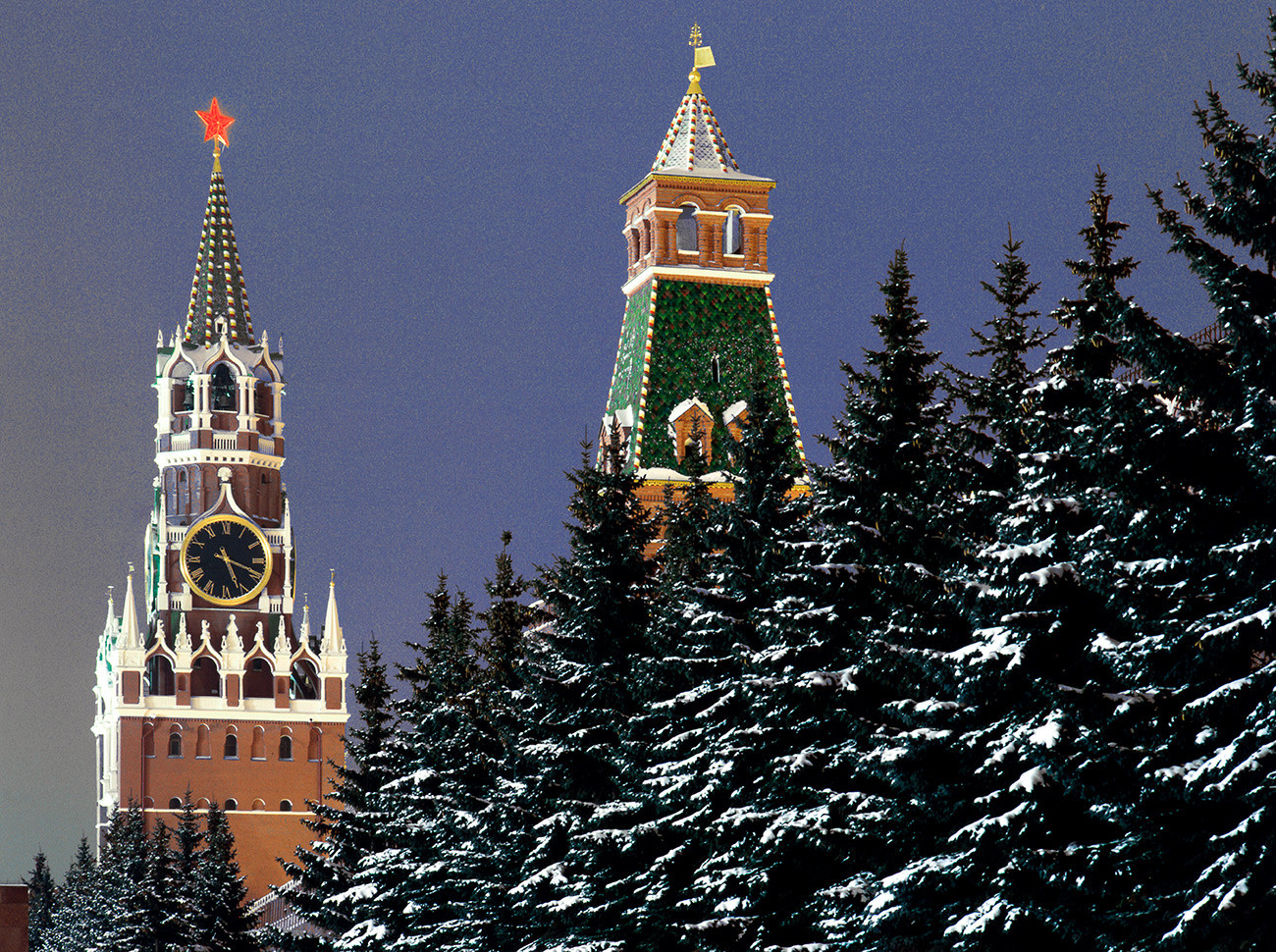 There is absolutely no doubt about it, this is the most famous tower. And after all, Russians watch this tower very attentively when they’re welcoming New Year – it is home to the Kremlin Clock that strikes twelve, symbolizing the change of years.

9. Russians didn’t even bother to name all the towers 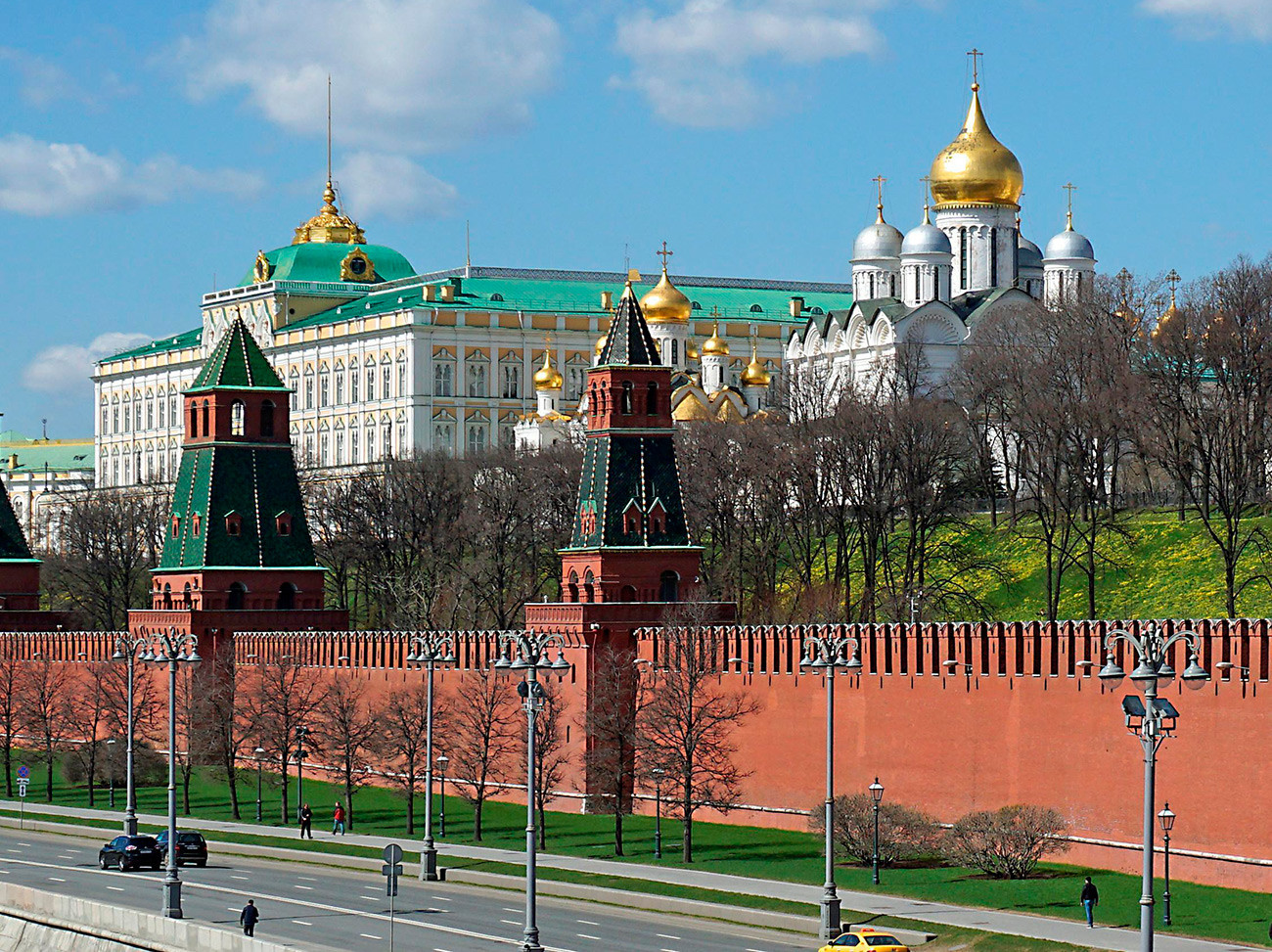 Not every tower is equally famous: there are two whose names literally are the First Unnamed and the Second Unnamed. They had only defensive functions, and there is little of interest about them... nothing much to read here, let’s move on.

10. The Kutafya is UNDOUBTEDLY the weirdest one 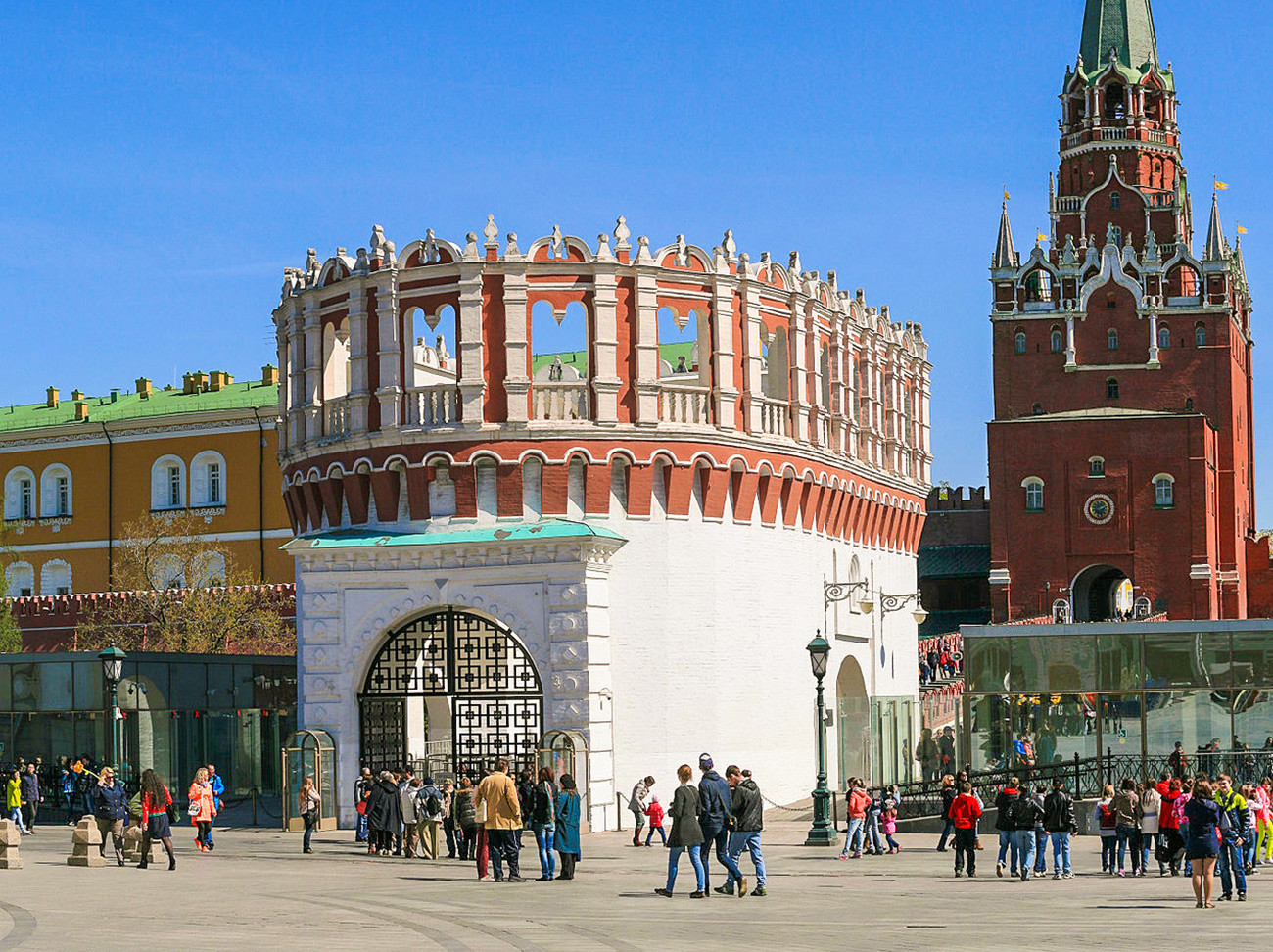 Just look at it. It’s white, it’s short and it’s even situated outside the Kremlin wall. Actually, it’s a barbican tower that was designed to protect the bridge over the Neglinnaya River, which links the Kutafya with the Troitskaya. Now, the Neglinnaya is long gone, paved over in underground pipes, but the Kutafya and the bridge remain. Tourists enter the Kremlin through the Kutafya – and the ticket office is right next to it.

To know how to get into the Kremlin click here.

11. Putin enters the Kremlin through one particular tower 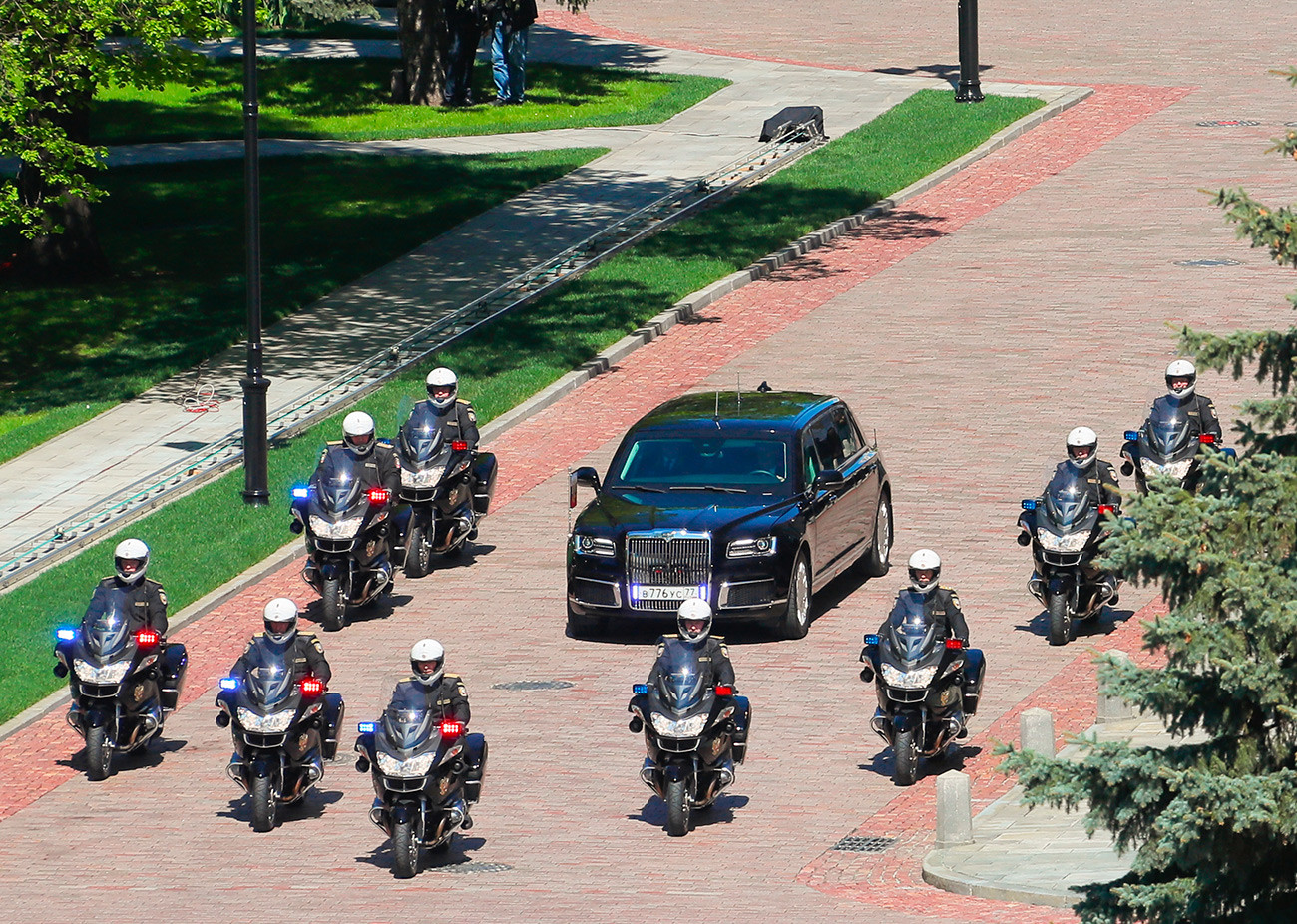 We mean, if he is not using a helicopter. It’s the Borovitskaya. Historically, leaders’ motorcades pass through the gates inside this tower, using ones in the Spasskaya only when there are repair works on the main gate.

12. Only one of the towers (except for the Kutafya) is built in a different style 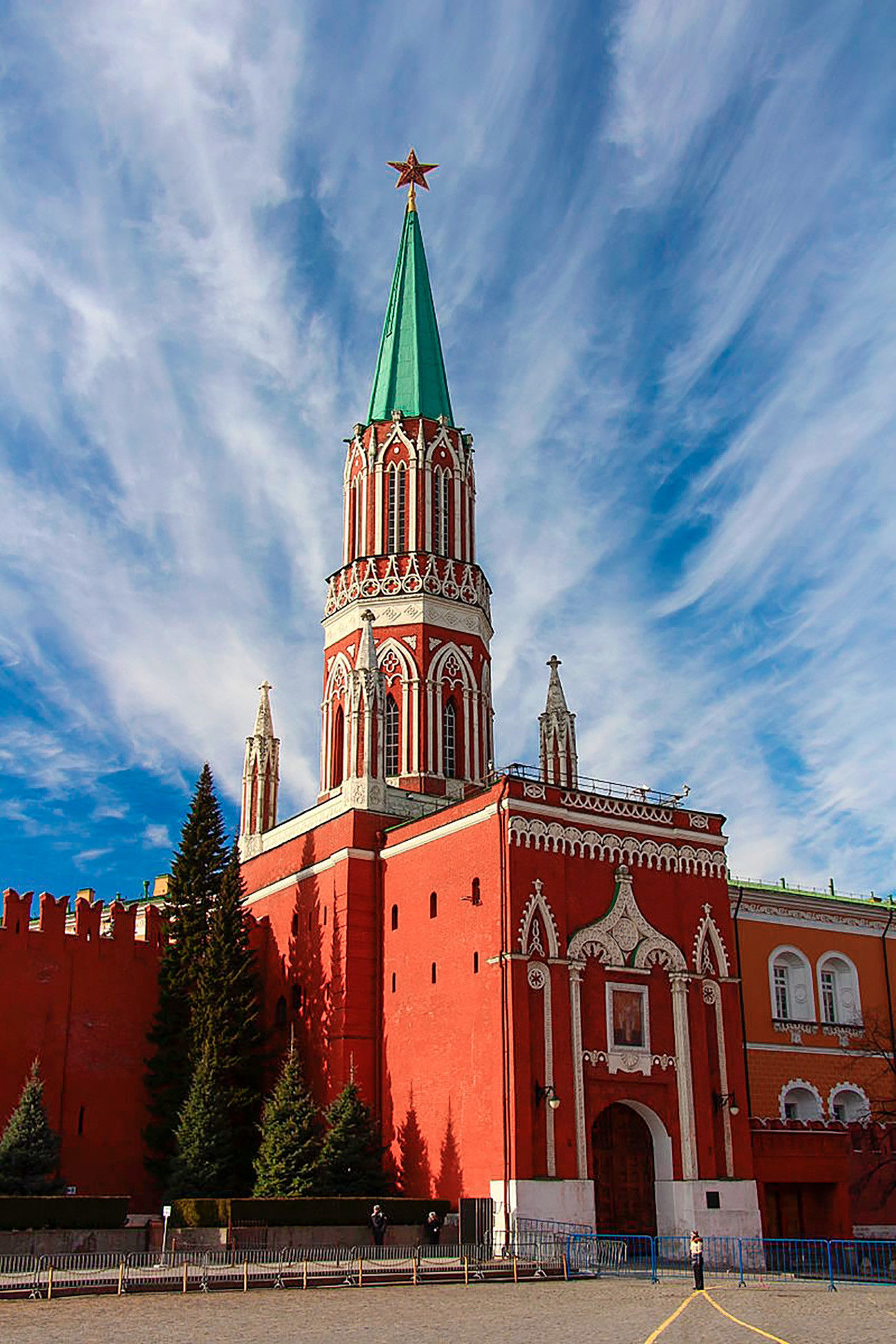 One can easily notice that the Nikolskaya looks different from its ‘sisters’: originally it was very similar to the Spasskaya, but was rebuilt in the neo-Gothic style in the early 19th century, with its white stone filigree elements. This tower, named after St. Nicholas (or Nikola), had a rough fate, being damaged in the 1812 war and then during the 1917 revolution, but now seems to be fine.

13. The Troitskaya is the tallest one 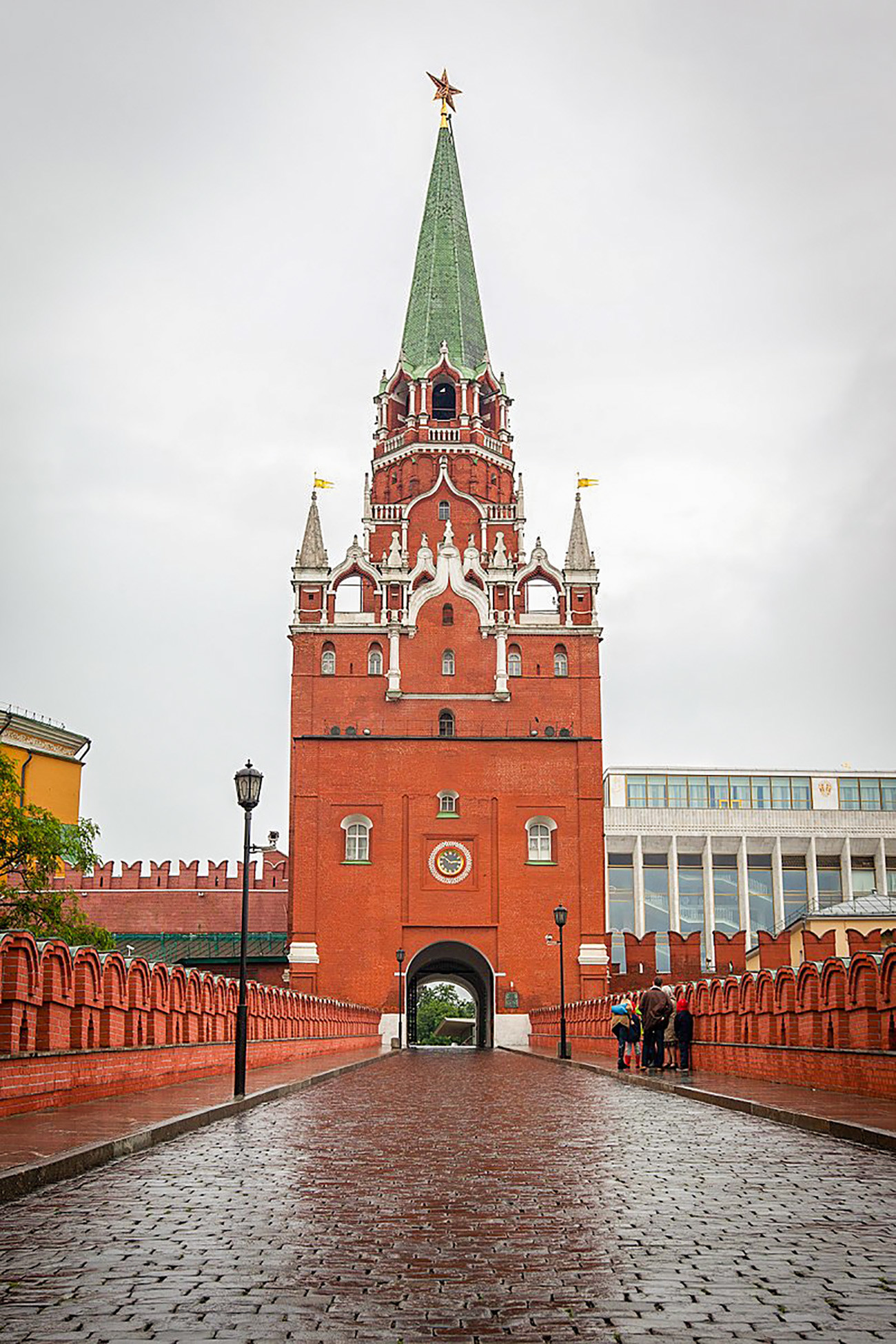 If we count the star on its top, the Troitskaya is 263 ft.. It’s linked by a bridge with the Kutafya, the shortest one which is only 44 ft. tall.

14. There is a funny non-towerish tower among them 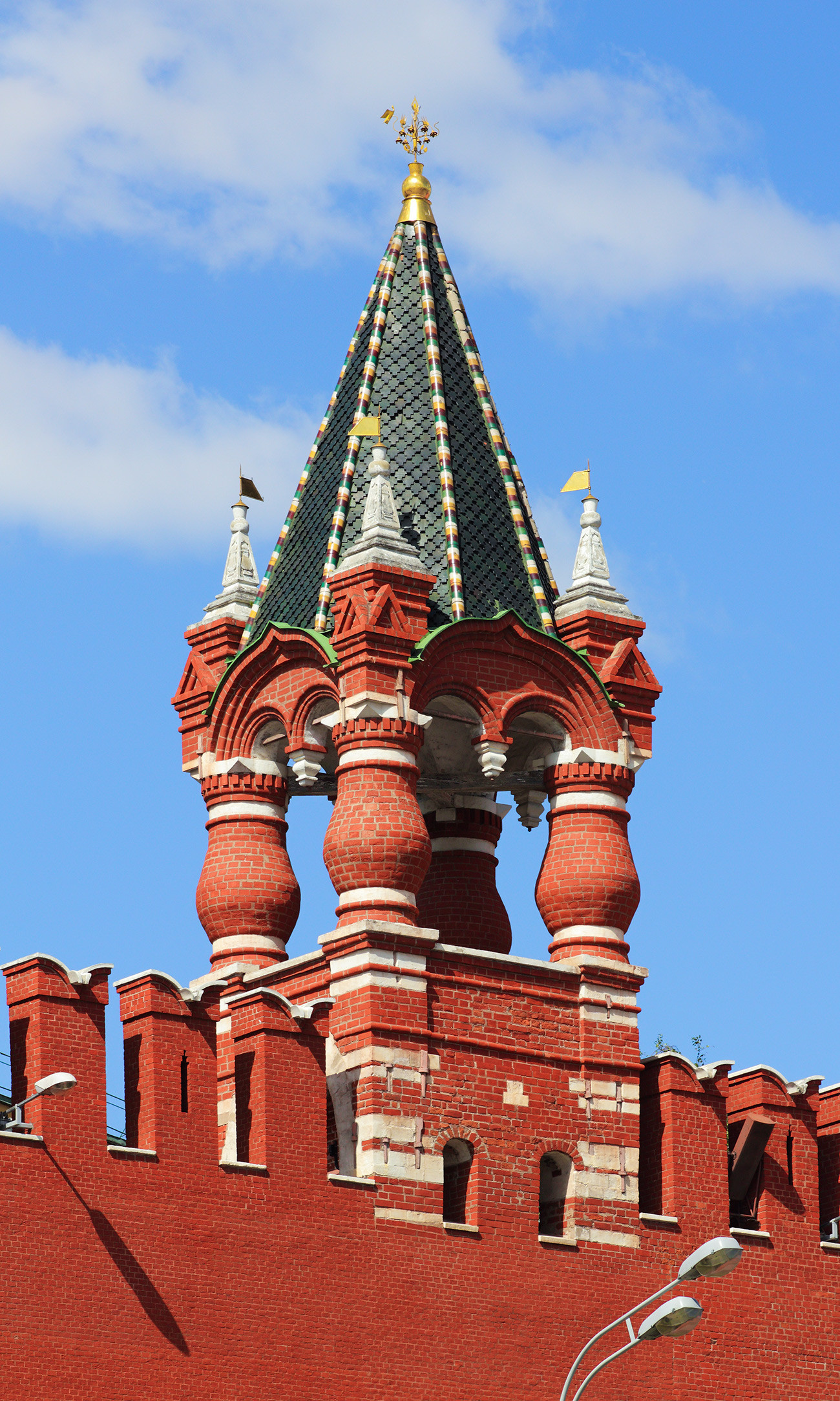 It is the Tsarskaya tower, which was the last tower to appear in the Kremlin, in 1680. Basically, it’s not a tower at all as it has no fortifications and makes sense in terms of defending the fortress. It looks like a decorative add-on: four columns and a roof right in the middle of a wall. Legend has it that Ivan the Terrible, used it as an observation point over Red Square. That’s why its name means ‘tsar’s tower’.

15. One of the towers had a bell which was destroyed for ‘fake news’ 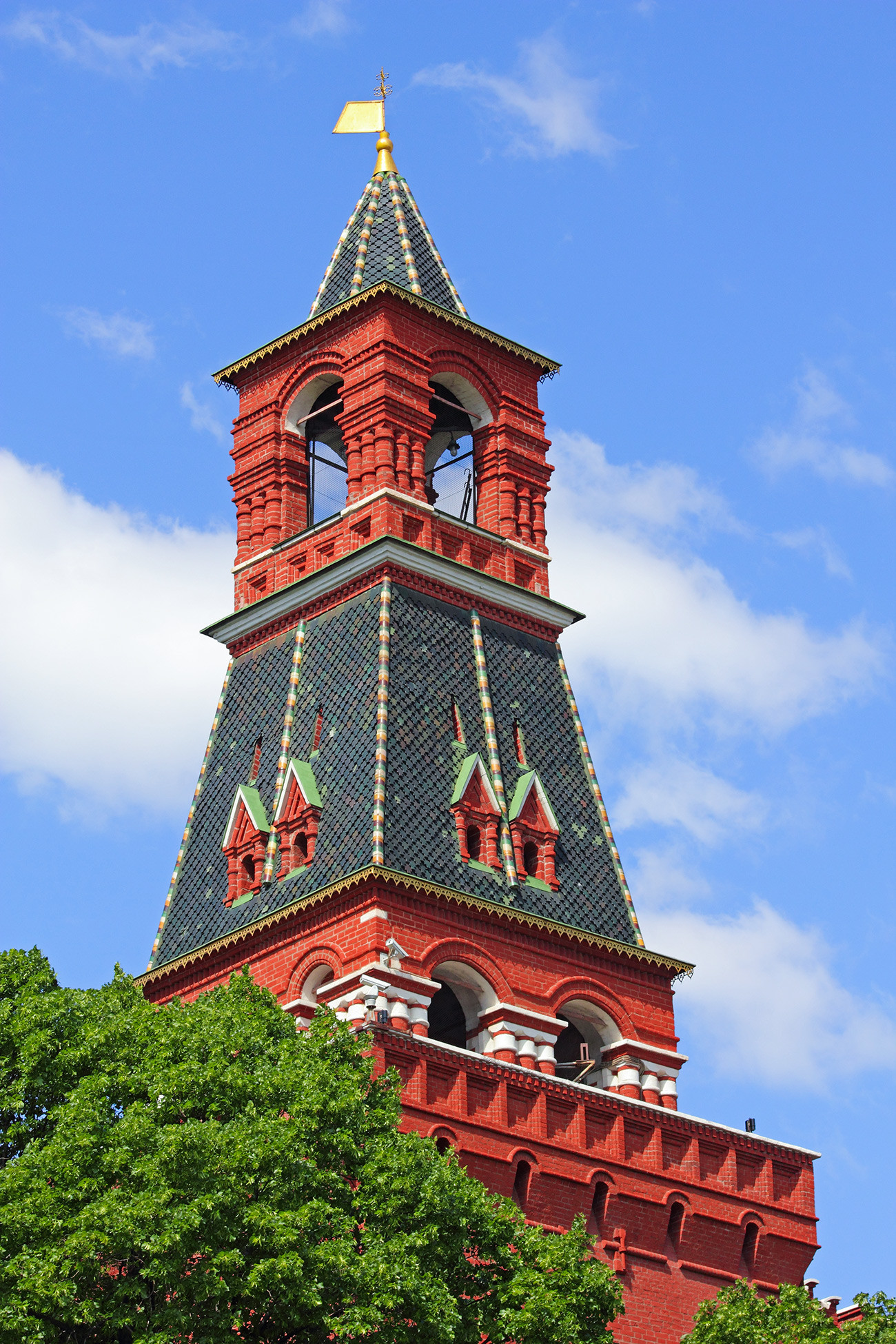 Right next to the Tsarskaya, there is the Nabatnaya tower (‘the alarm tower’). From 1658, there was a bell in it, which was used to ring alarms in case of fire, riots or other emergencies. However, when there was unrest in Moscow in 1771, the rebels managed to get in the tower and rang the alarm to gather crowds. After suppressing the riot, an angry Catherine the Great ordered the bell silenced forever, and its clapper was removed.. In 1803, the bell was taken away altogether.

16. There was a tower that hosted a gruesome prison 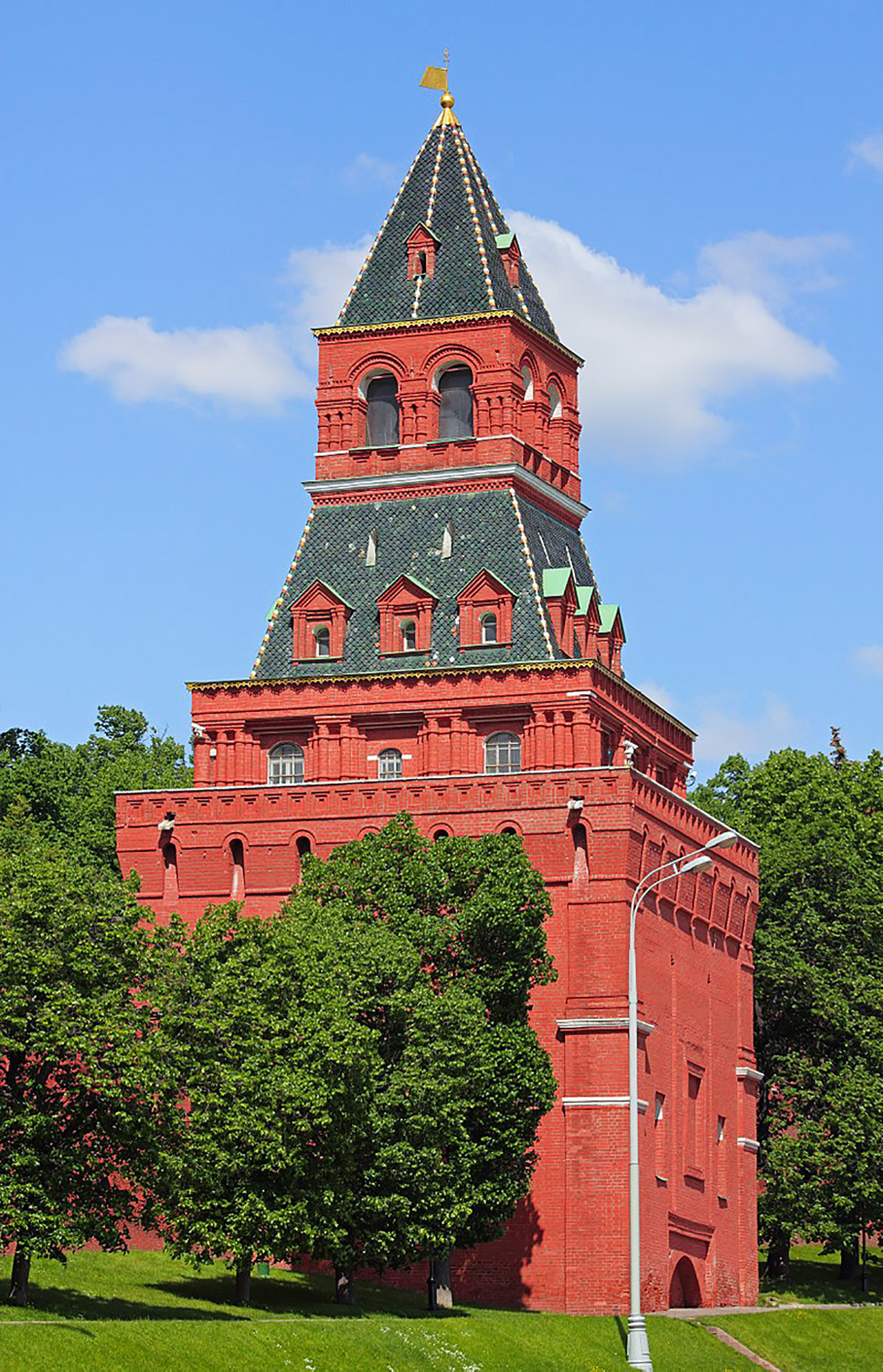 In the late 17th century tsar Alexey Mikhailovich established a prison and several torture rooms inside the Konstantino-Eleninskaya tower: people even nicknamed it the Pytoshnaya (‘torture’) tower instead of its long and beautiful name. For a couple of centuries the tower had a bad reputation among the common folk; a legend was told that a blood stain appears once in a while on the tower’s wall...

17. Another tower still hosts an orchestra 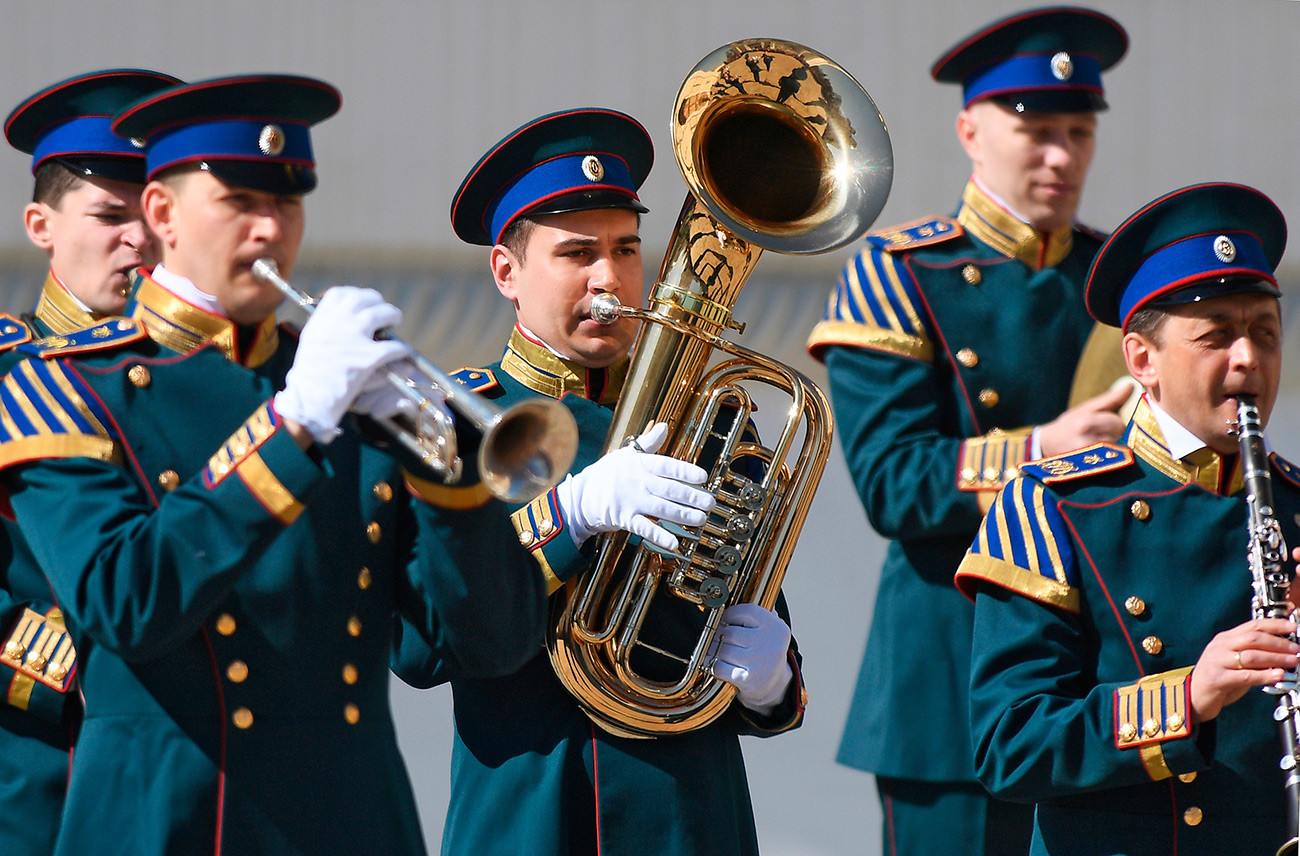 The Troitskaya tower is the only one which is ‘inhabited’: since the 1920s, the military band of Kremlin’s guards has a rehearsal room here. It is still a thing today: the Presidential Band of the Russian Federation, the main band that plays in front of Russian officials and foreign leaders during their visits to the Kremlin, rehearses here.

18. You can visit Lenin from one of the towers 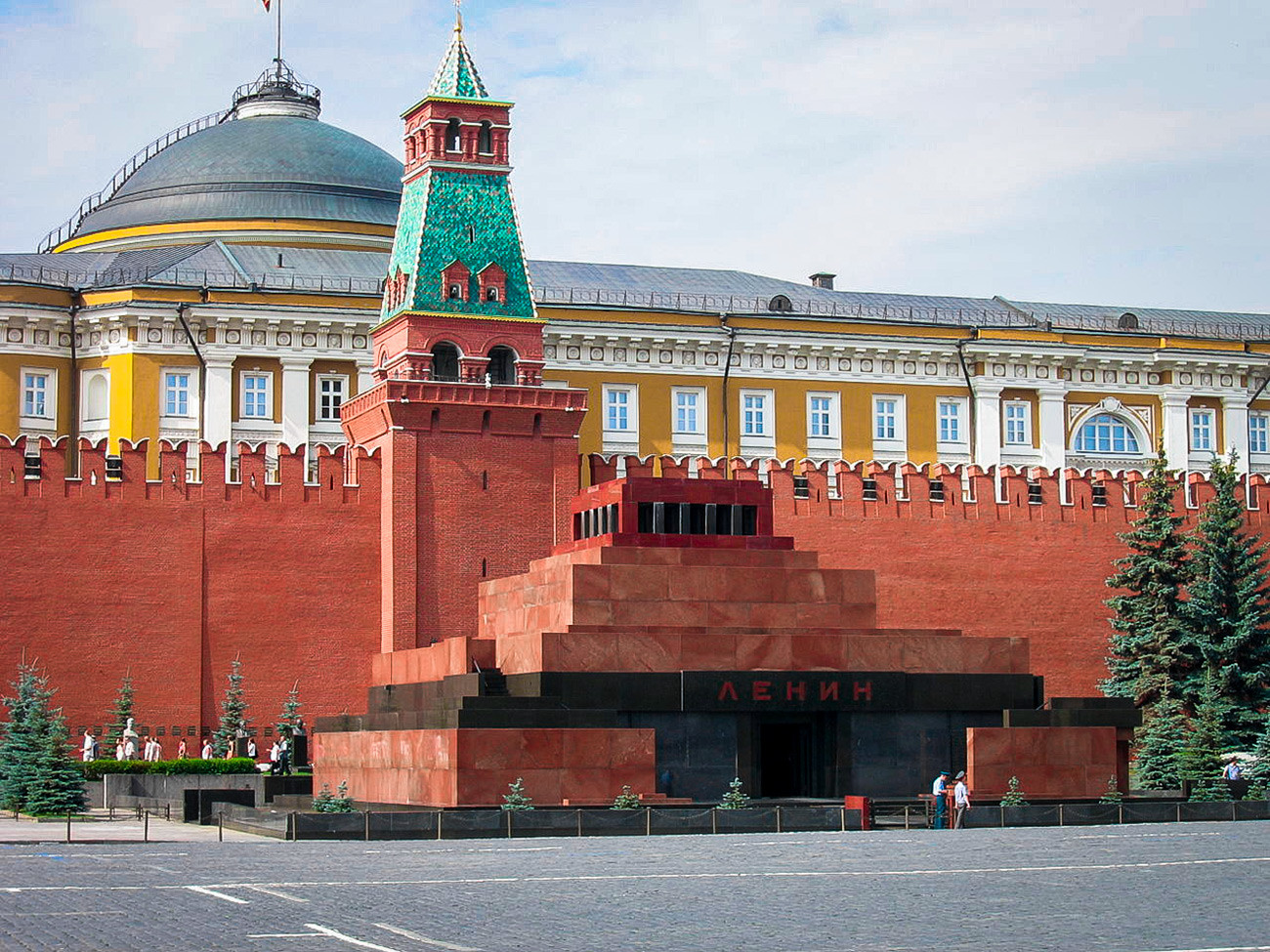 Well, you as an ordinary tourist absolutely cannot. But it was a popular option for Soviet leaders since 1948. There were various occasions when they had to address the people from the ‘holiest’ place in the USSR, the rooftop of Lenin’s Mausoleum, but it was quite inconvenient to leave the Kremlin and go across Red Square on foot.

What was the solution? Establishing a closed passage from the nearest Kremlin tower, Senatskaya, to the Mausoleum – and architect Nikolay Vinogradov did it. Now, the passage is probably not used very often.

19. The Corner Arsenalnaya is the most secure one 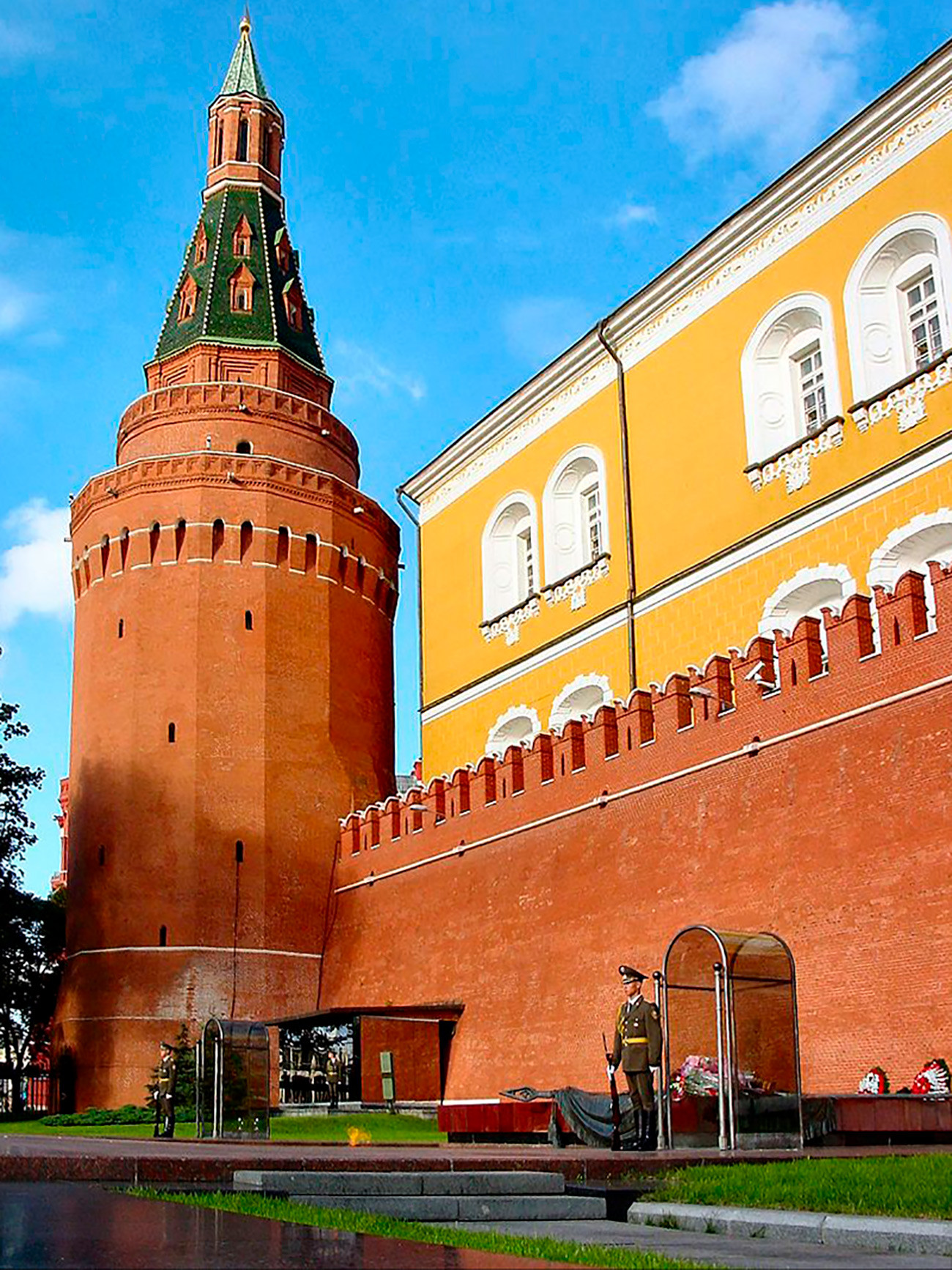 Just look at this corner tower: it looks very solid. Indeed, it has the thickest walls in the fortress, 13 ft. thick. So in case of a zombie apocalypse it’s probably the best one to hide in (if you happen to be inside the Moscow Kremlin).

20. There was another Kremlin tower (inside the Kremlin!) but they tore it down 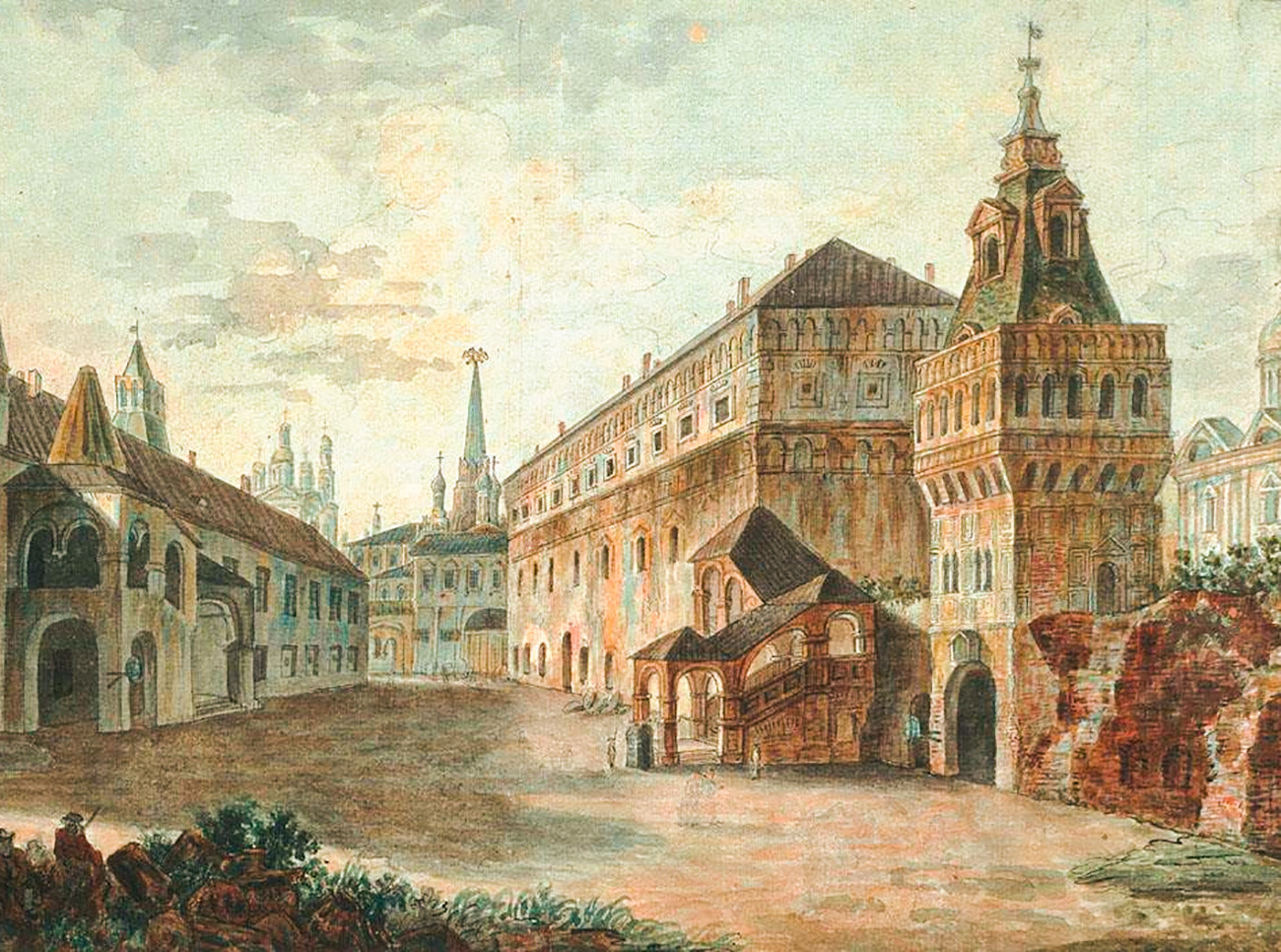 Technically, the Gerbovaya tower didn’t belong to the ensemble of the Kremlin walls as it was situated inside them, next to palaces and cathedrals protected by the fortress. But still, it was a tower, and quite an outstanding one as it was decorated with heraldic emblems of Russian cities. Unfortunately, by the 19th century it became obsolete and the government had it demolished.