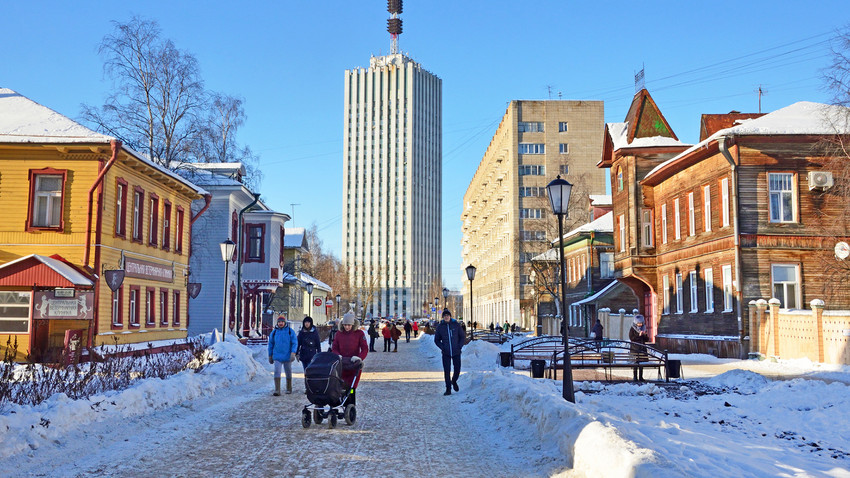 Legion Media
For those seeking to experience Russia beyond the conventional tourist destinations, there are places like Arkhangelsk, with its fascinating sights and traditions - ones not even all Russians are familiar with.

Right below the Arctic Circle, relatively close to the capitals, the city and oblast (region) of Arkhangelsk preserved its centuries-long folk traditions, which coexisted alongside the intertwining layers of imperial, Soviet, and contemporary Russian culture. In winter or in summer, the city by the White Sea could be a great new destination for your exploration of Russia.

Starting from the 12th century, the region of Arkhangelsk was inhabited by Pomors (literally ‘seasiders’), who settled alongside the White Sea coast and the Northern Dvina River basins. 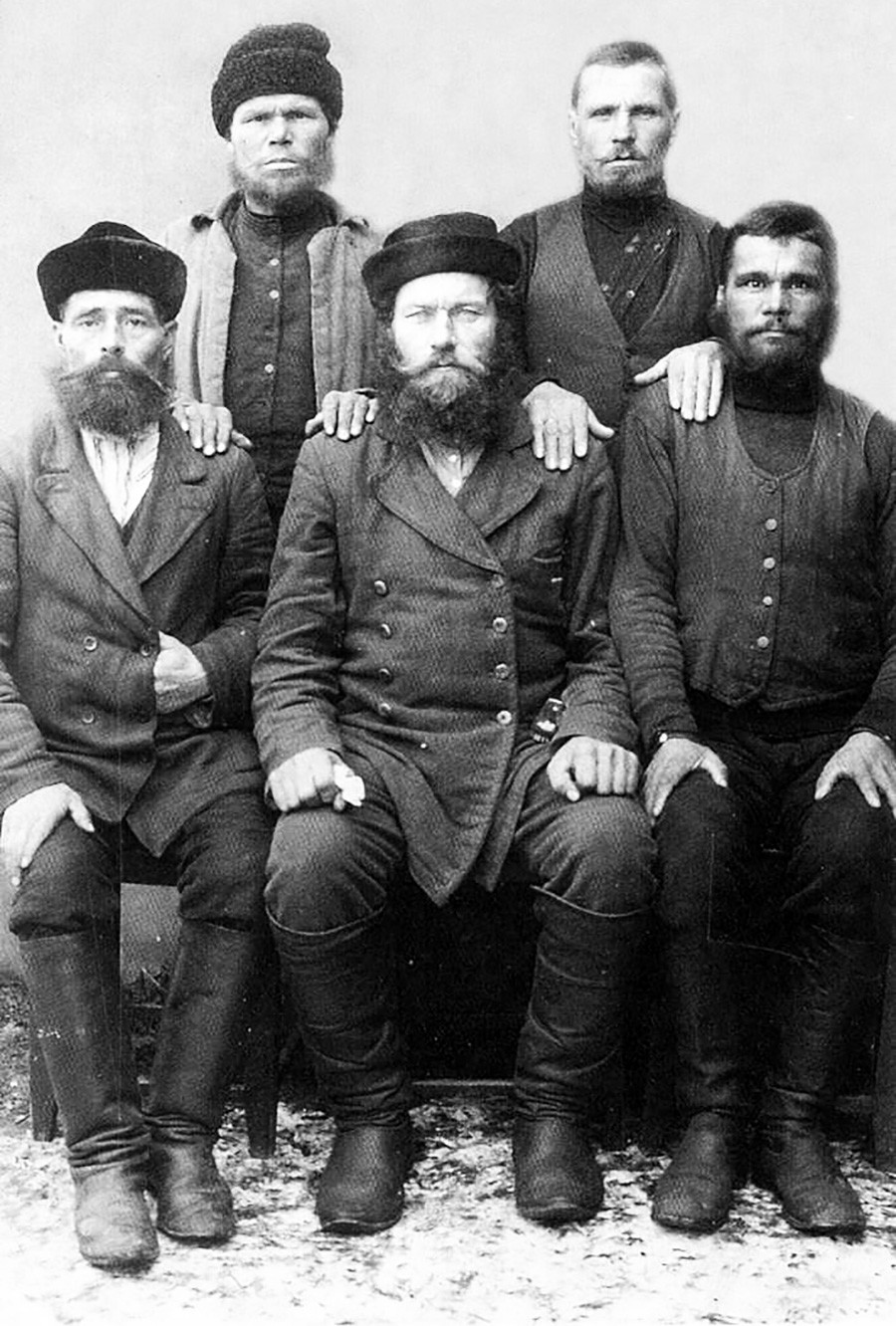 Although Pomors are not entirely considered a separate ethnic group, many Arkhangelsk citizens identify themselves as such and proudly promote this culture, which has become a local trend thanks to the popular DoskaTreska designers group. Today you can find people proudly displaying their Pomor-ness and wearing sweatshirts with DoskaTreska’s prints all over the world. 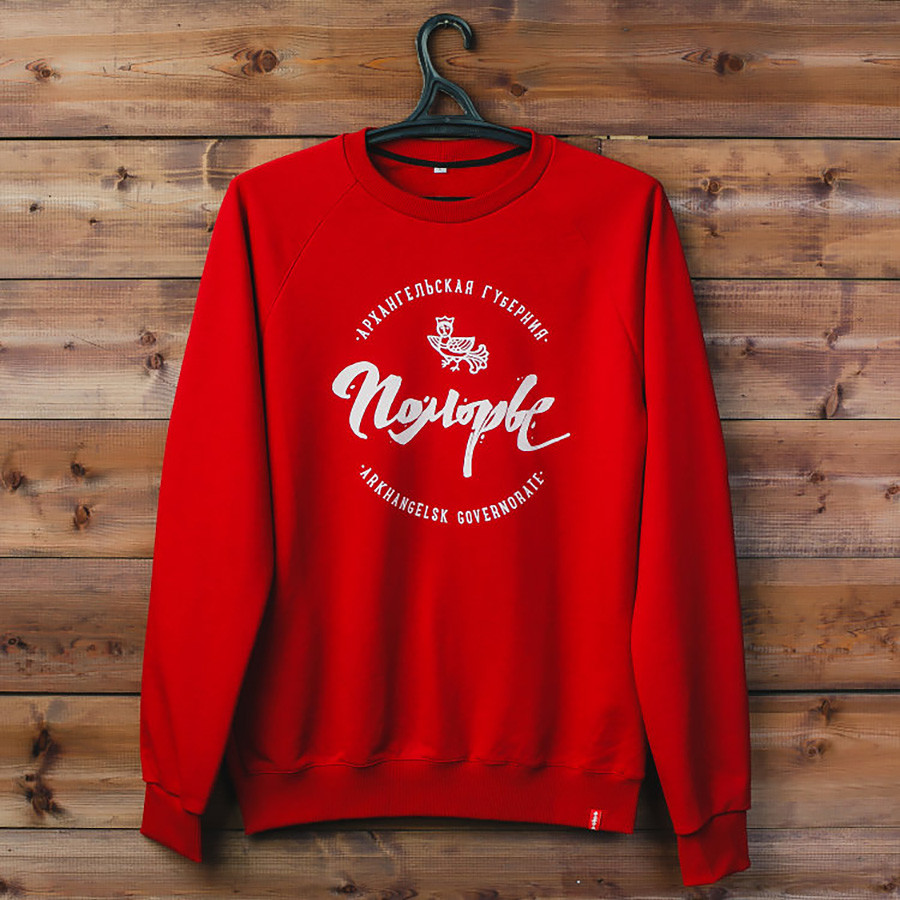 Arkhangelsk, whose founding year is considered to be as early as 1584, was Russia’s main port and trading hub with the Europeans for several centuries. In Daniel Defoe’s Further Adventures of Robinson Crusoe, the novel’s main character even stops in the White Sea port of Arch-Angel on his way back to England after his adventures around the globe in the early 18th century.

Peter the Great, however, brought the heyday of Arkhangelsk to an end by shifting the main nexus of European and Russian culture to the newly-founded Saint Petersburg in 1703. Nevertheless, because of its geographical location, Arkhangelsk still inevitably played significant roles. Remaining a connecting point between central Russia and Europe, Arkhangelsk would host allies and receive supplies from the West during most of Russia’s subsequent military conflicts, especially when the Baltic port of Saint Petersburg was inaccessible. That’s why, when you’re in Arkhangelsk, don’t forget to check out the British Mark V 9303 tank from 1919, a Soviet trophy and a symbol of the Bolsheviks’ ultimate victory over the White army and Allied Intervention during the Russian Civil War. At the same time, you can find several landmarks commemorating the British, Icelandic, and North American contributions to Russian victory in World War II through their crucial help during the Arctic Convoys from August 1941 - May 1945. 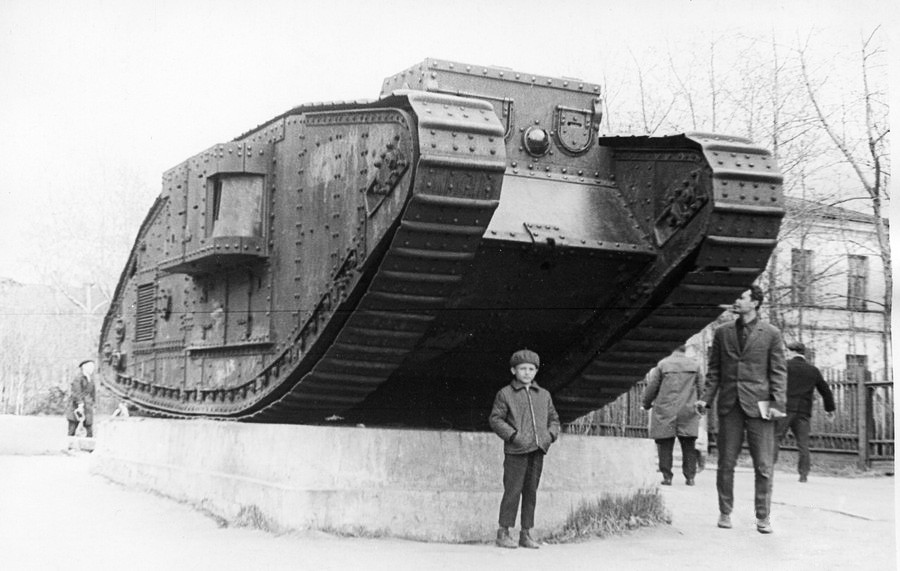 1919 British trophy tank in the center of Arkhangelsk

Abundant in forests, Arkhangelsk’s main construction material has been wood, which resulted in a great variety of examples of distinctive Northern architecture. Although many of the wooden houses are gradually disappearing from the city’s landscape, the most outstanding examples of traditional wooden architecture from all over the vast Arkhangelsk region are carefully preserved in the spectacular open-air museum Malye Korely, located 25 km (15 miles) from the city. The museum successfully recreates the buildings’ historic interiors, organizes traditional outdoor activities, and even serves as a base for skiing and snowboarding in winter time. 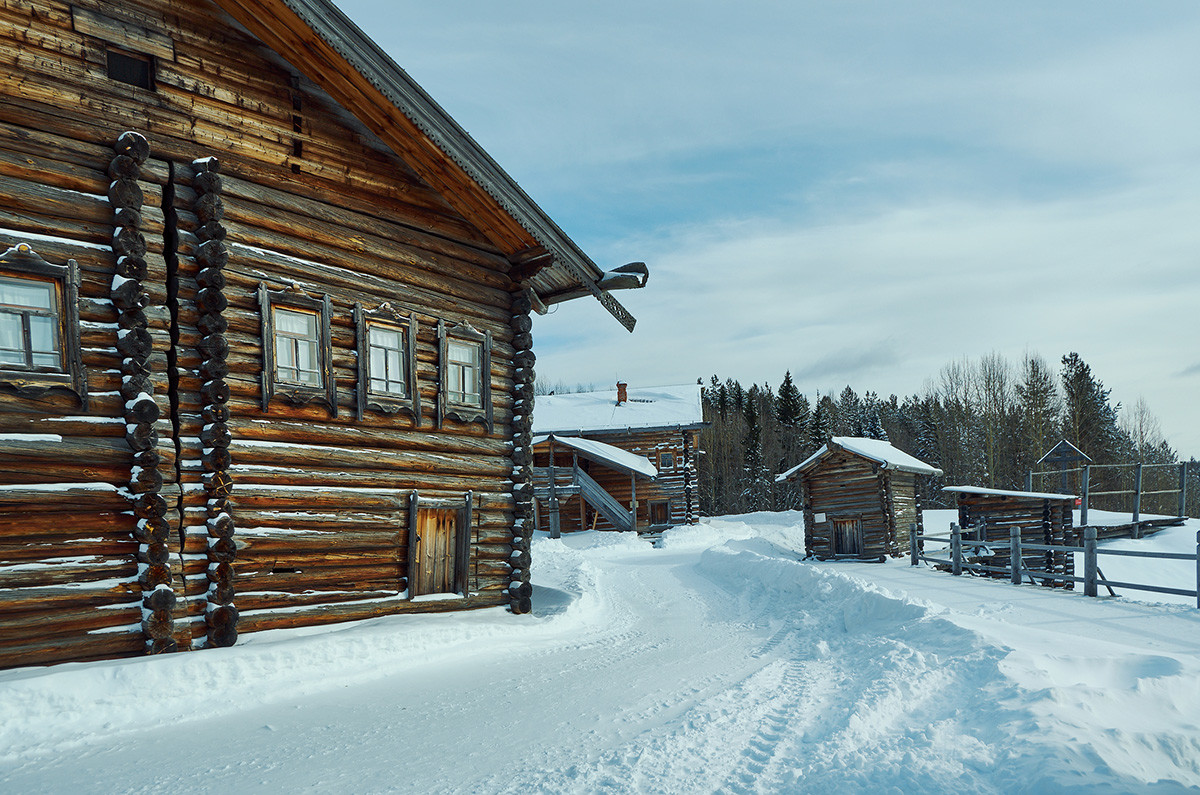 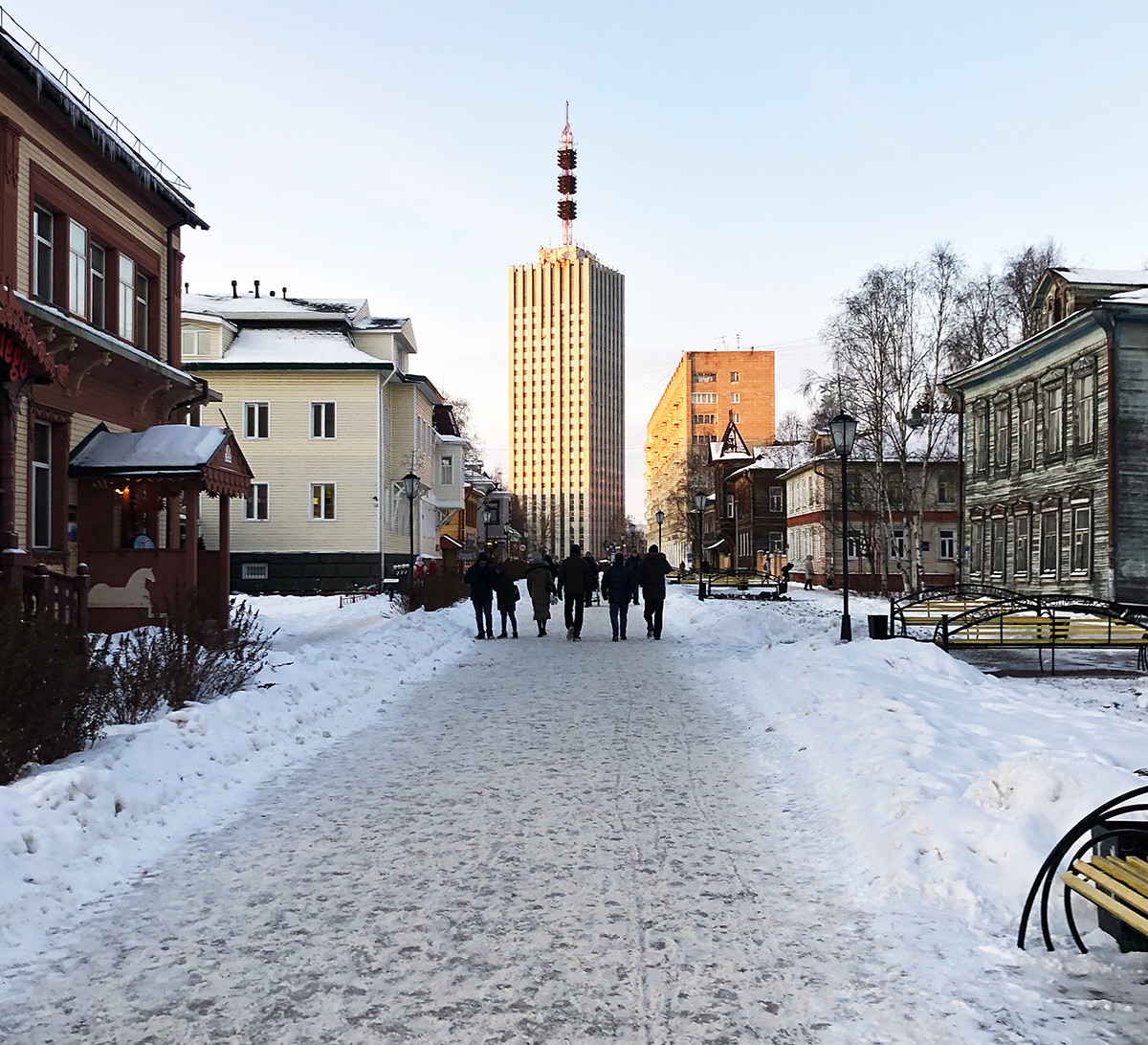 Interestingly, the first Soviet utopian constructivist structures were wooden, which makes Arkhangelsk a unique place where such a highly functional style emerged in this medium. 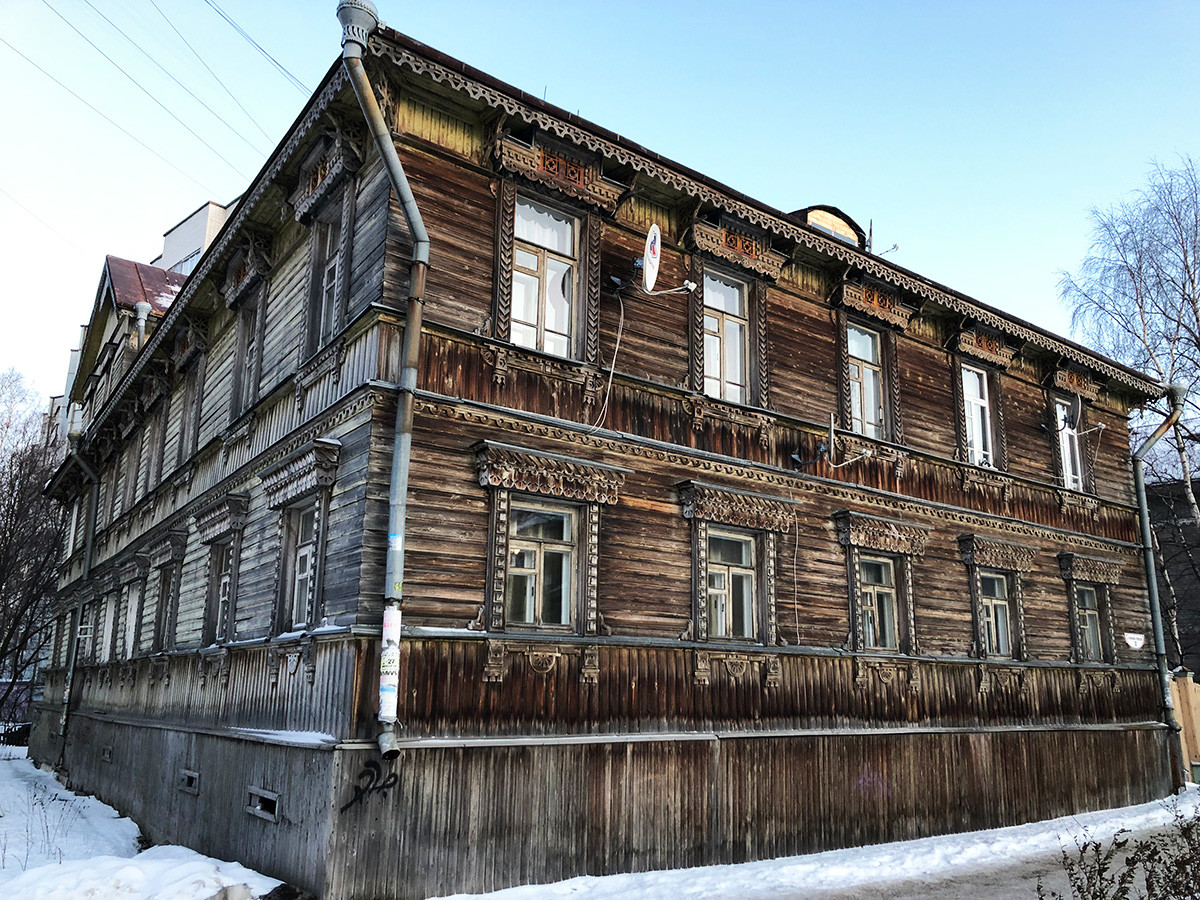 Luckily, the first constructivist wooden buildings are still in place, although in a deplorable state, waiting for the authorities to take action. You can find examples of these romantic post-Soviet ruins on Severodvinskaya 3-7 street.

And the main square today... 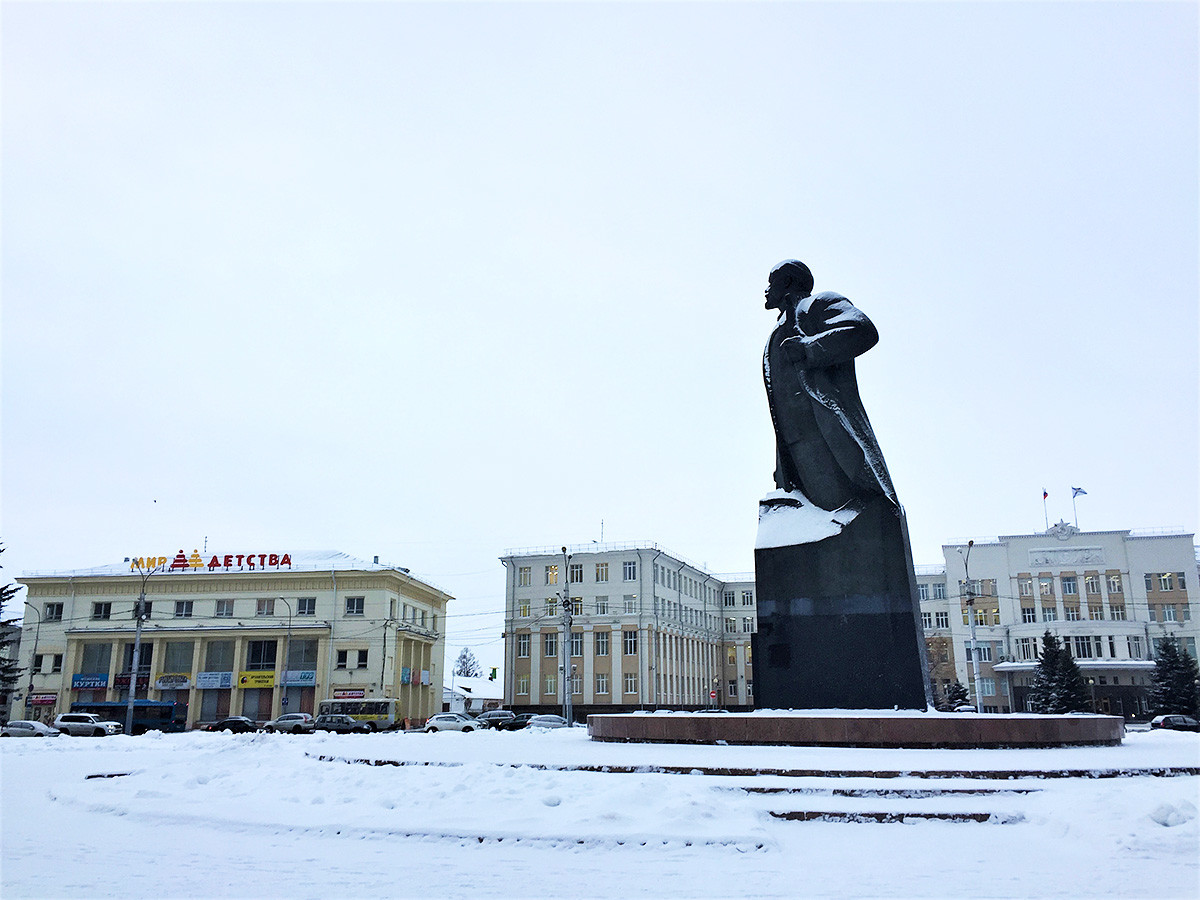 Statue to Vladimir Lenin on the main city square. Sign on the left reads "world of childhood."

What also remains a nostalgic reminder and a distinct trait of old Arkhangelsk are wooden mostochki (мосточки), or planked narrow roads, running alongside either high-rises or their small wooden neighbors. The local authorities don’t seem to be willing to remove this cosy symbol of a wooden past, and organize the repair of the roads every once in a while. 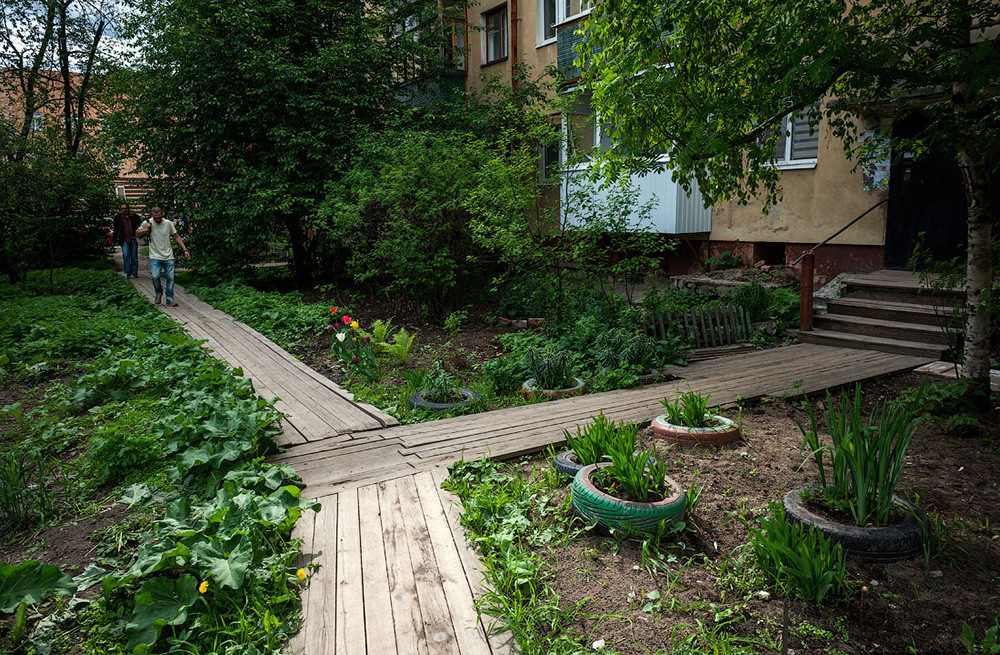 Planked mostochki roads on the streets of Arkhangelsk

Many of the old regional crafts are still preserved in Arkhangelsk. These include ivory carving and woodwork, embroidery, weaving, and decorative folk painting. 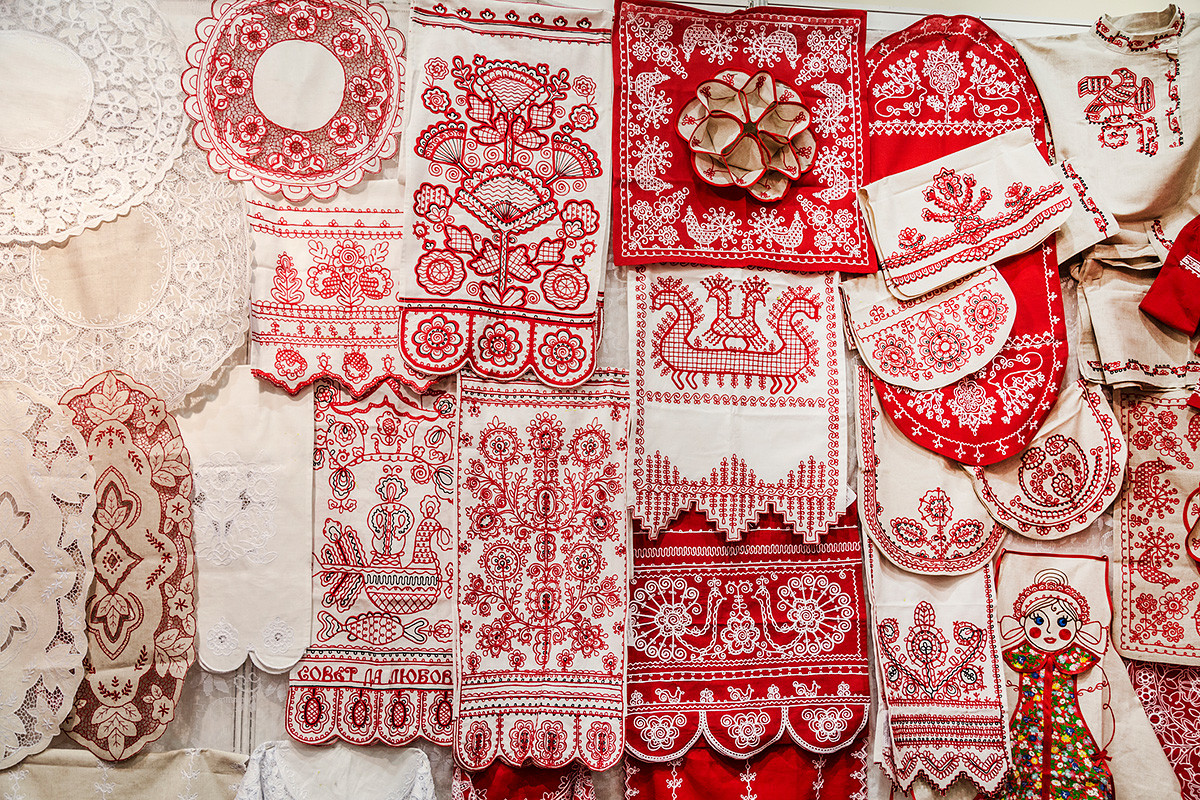 You can easily find these items in the Burchevskogo Crafts School in the city center and in local specialized stores, such as Belomorskii Uzori. 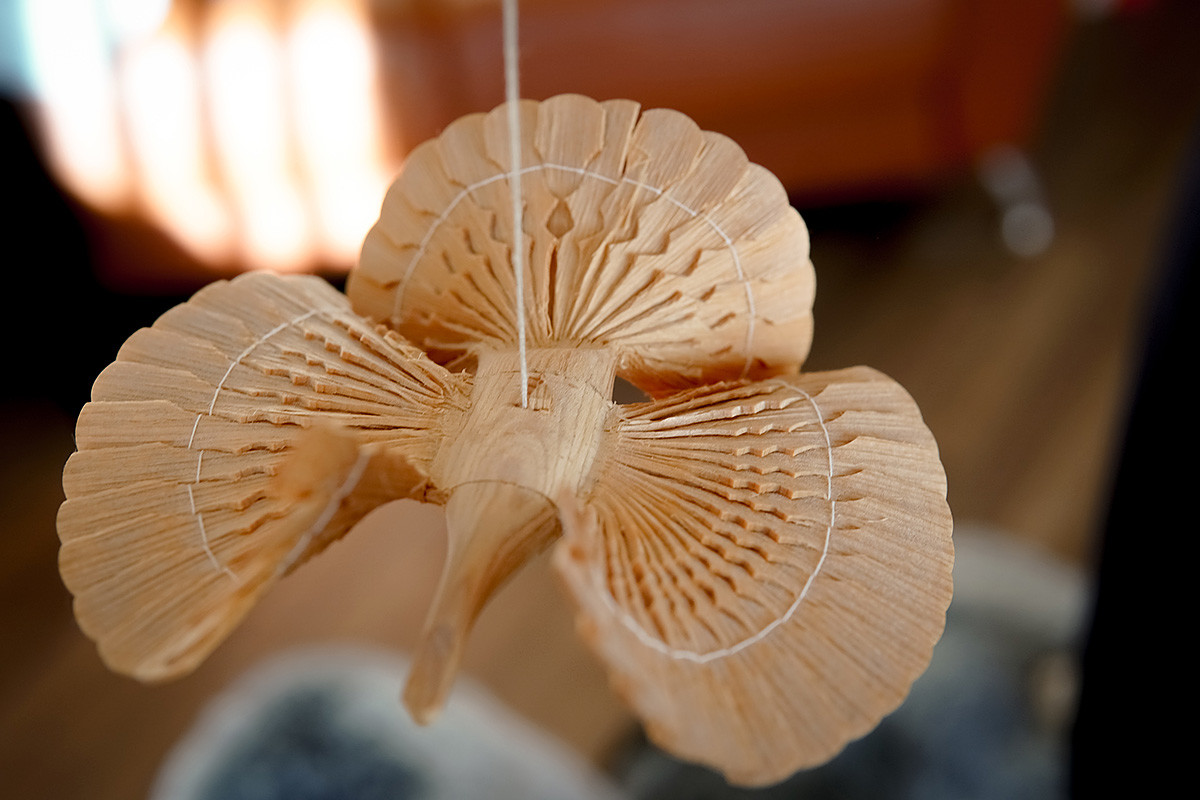 A wooden souvenir - 'the bird of happiness'

Arkhangelsk Art Museum also has a rich collection of traditional household items, as well as a vast number of beautiful icons, collected from small village churches all across the Arkhangelsk region. Not long ago, the museum has invited local graffiti artists to decorate its building with graffiti of famous 20-th century paintings, symbolically uniting Russian avant-garde with medieval Christian Orthodox art, which had a great influence on the former. This campaign encouraged other local artists to “upgrade” many more buildings in the city for you to explore. 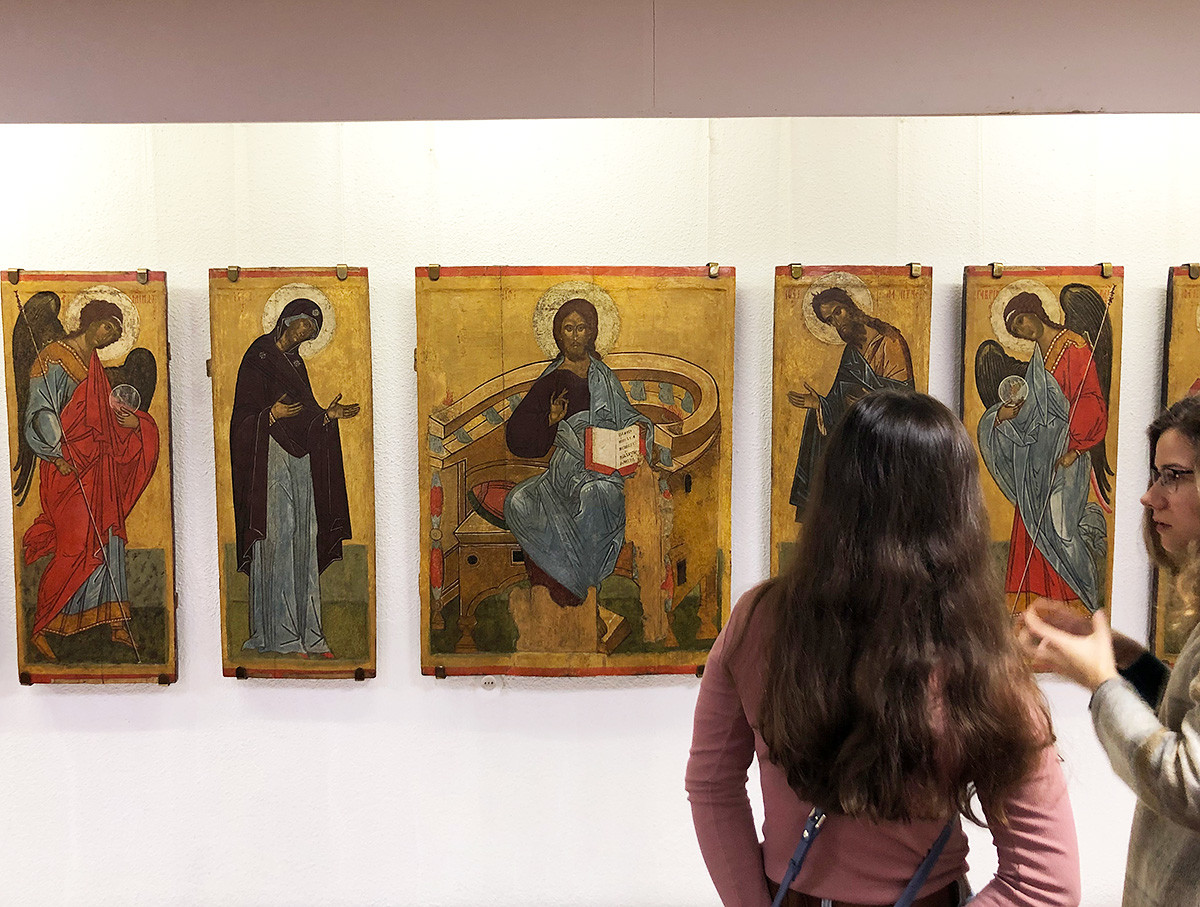 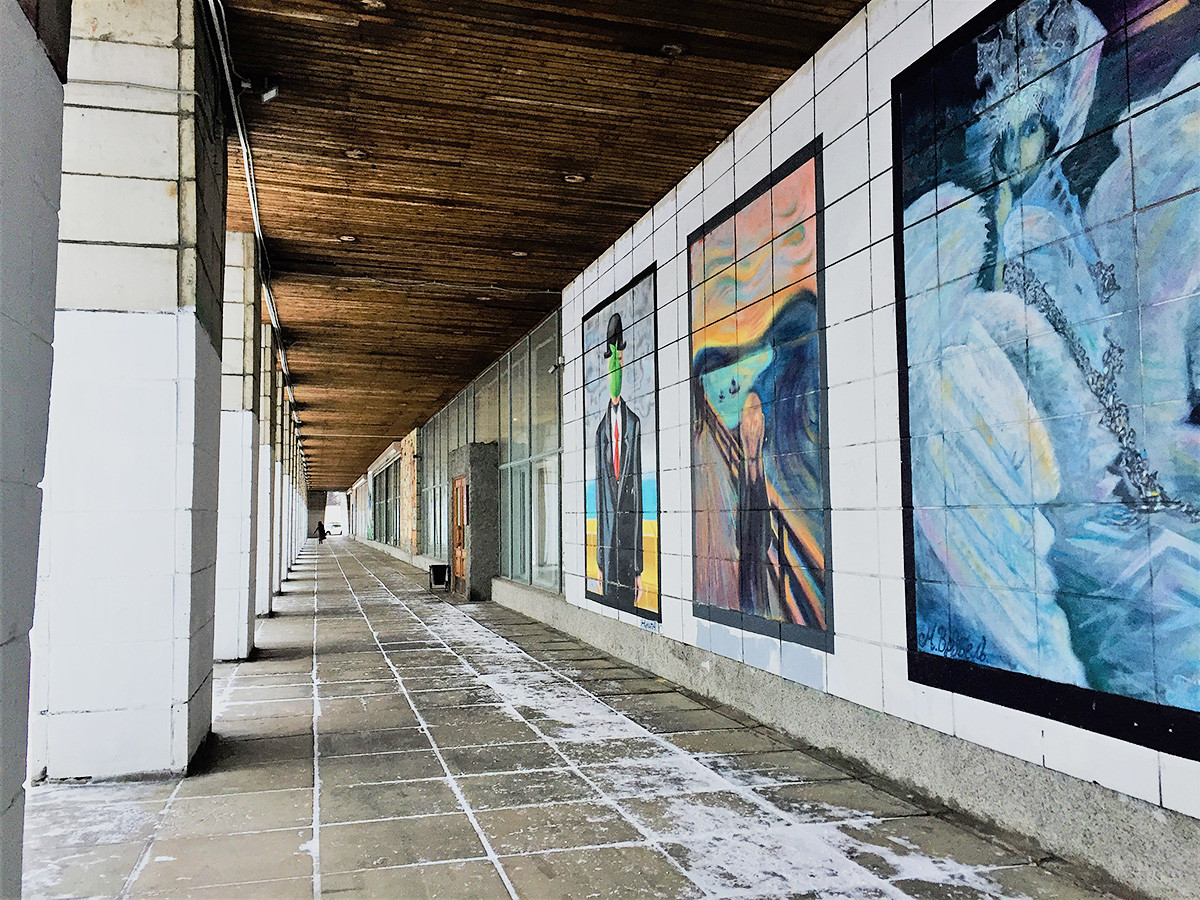 In Arkhangelsk, you have a great chance to try food that might not be familiar even to some Russians. Because of close proximity to the White Sea, you can taste numerous fish, such as paltus (halibut), treska (Atlantic cod), navaga (saffron cod), and syomga (Atlantic salmon). Most commonly, you’ll eat a hearty meal of just fish with potatoes, but sometimes your chef may wrap it in open pies that are called kulebyakas or shangas.

Locals also make all sorts of pastries - kalitkas and vatrushkas with forest berries, such as moroshka (cloudberry), klyukva (cranberry), brusnika (lingonberry), and chernika (blueberry). Another famous local delight is kozulyi, a thick ginger biscuit with glaze decoration. Go to any local bakery to taste some truly Arkhangelskian delicacies. 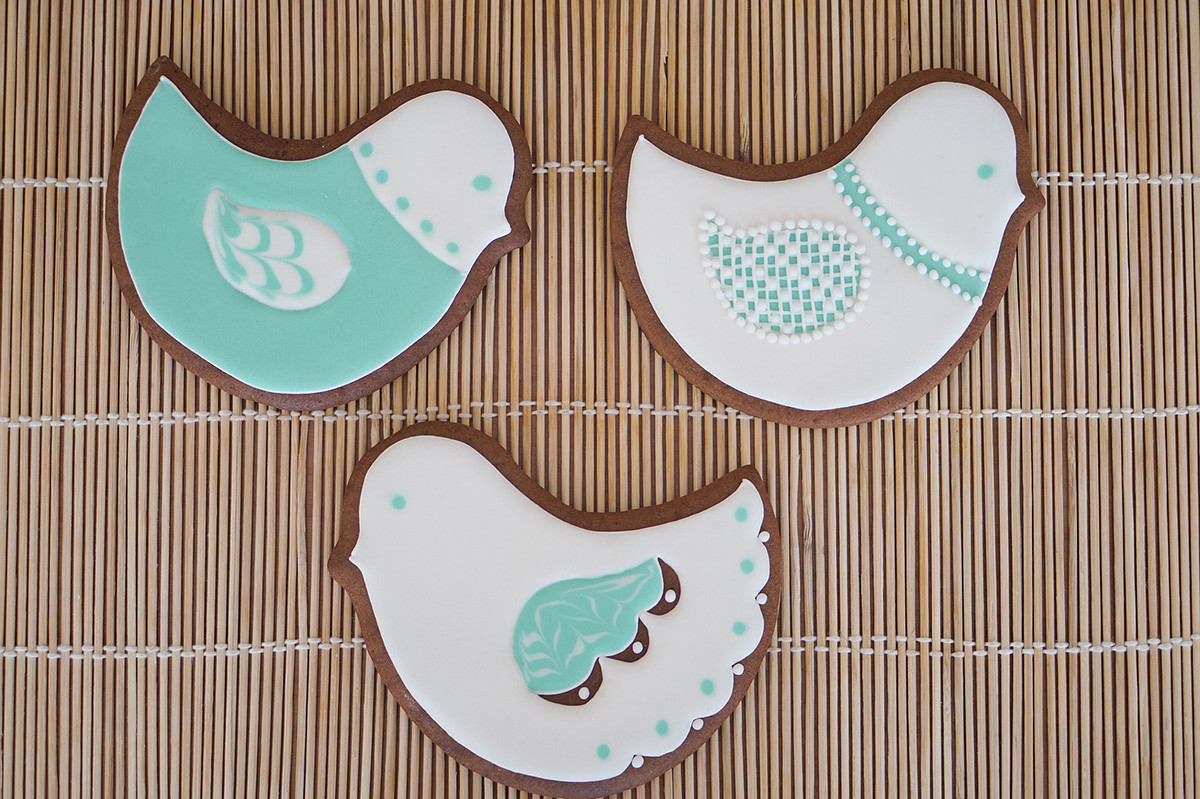 Finally, starting from 1918, Arkhangelsk Experimental Seaweed Factory is the only Russian enterprise processing Arctic seaweed to produce organic sea kale or laminaria products, including chips, spices, and even marmalade. You can find shops selling the factory’s products at the city’s main malls Titan Arena and EuroPark, or in the factory itself, on Leningradsky Ave 328, where you can also take a tour to learn about the history of this fantastic place. 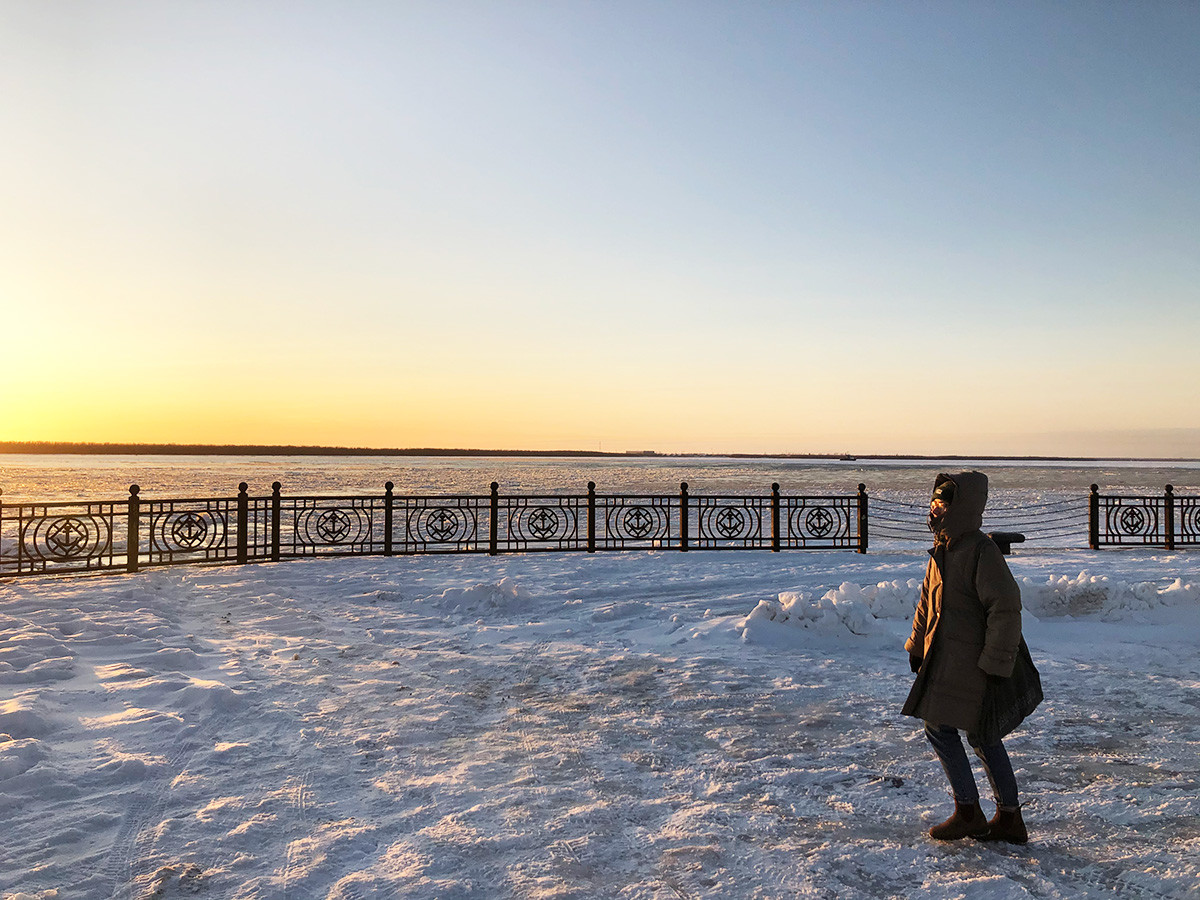 If you visit Arkhangelsk in winter, go to the city embankment of the Northern Dvina river to experience fairytale Northern nature. When traveling in summer, try to make it to Arkhangelsk by the end of June because every year since 1990, Panov Arkhangelsk Regional Youth Theatre has hosted the International Street Theatre Festival, inviting experimental performers from all over the world. So, welcome to Arkhangelsk, it’s worth visiting! 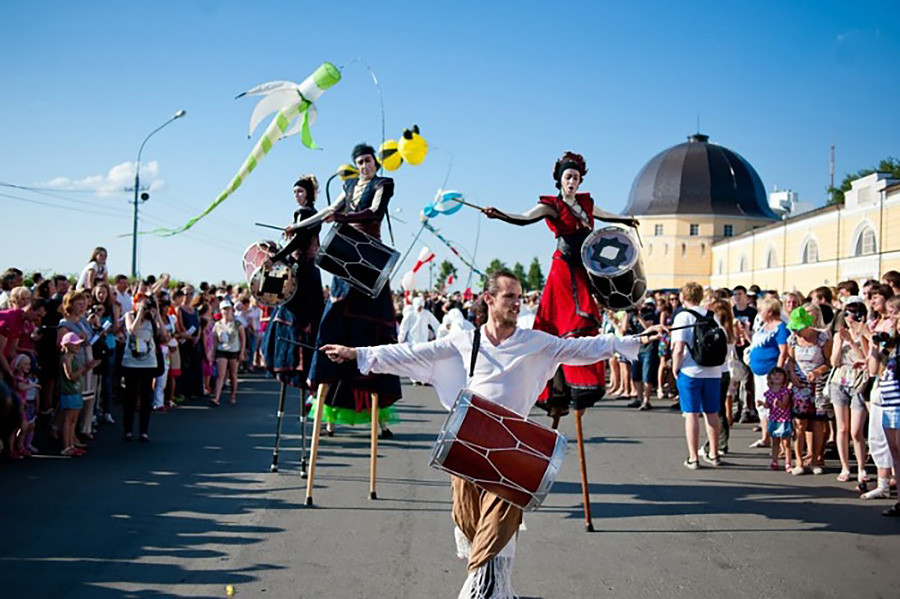