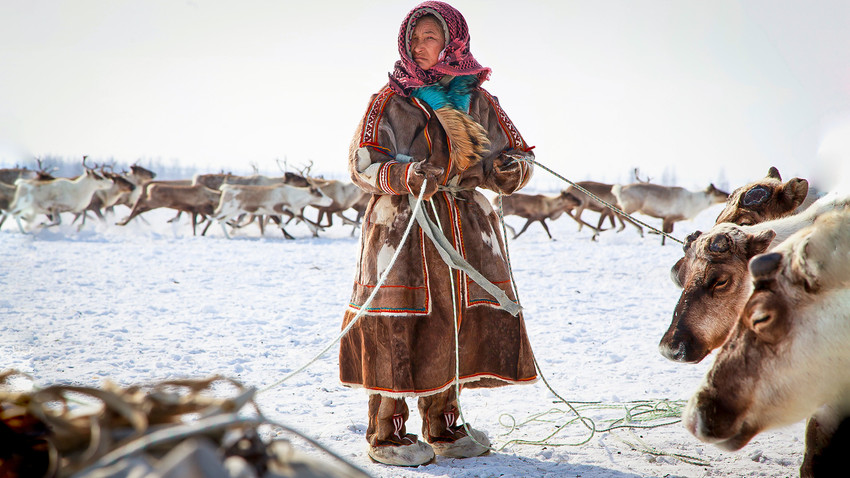 Legion media
They make clothes and homes out of animal hides, hunt for food, and roam freely across international borders. 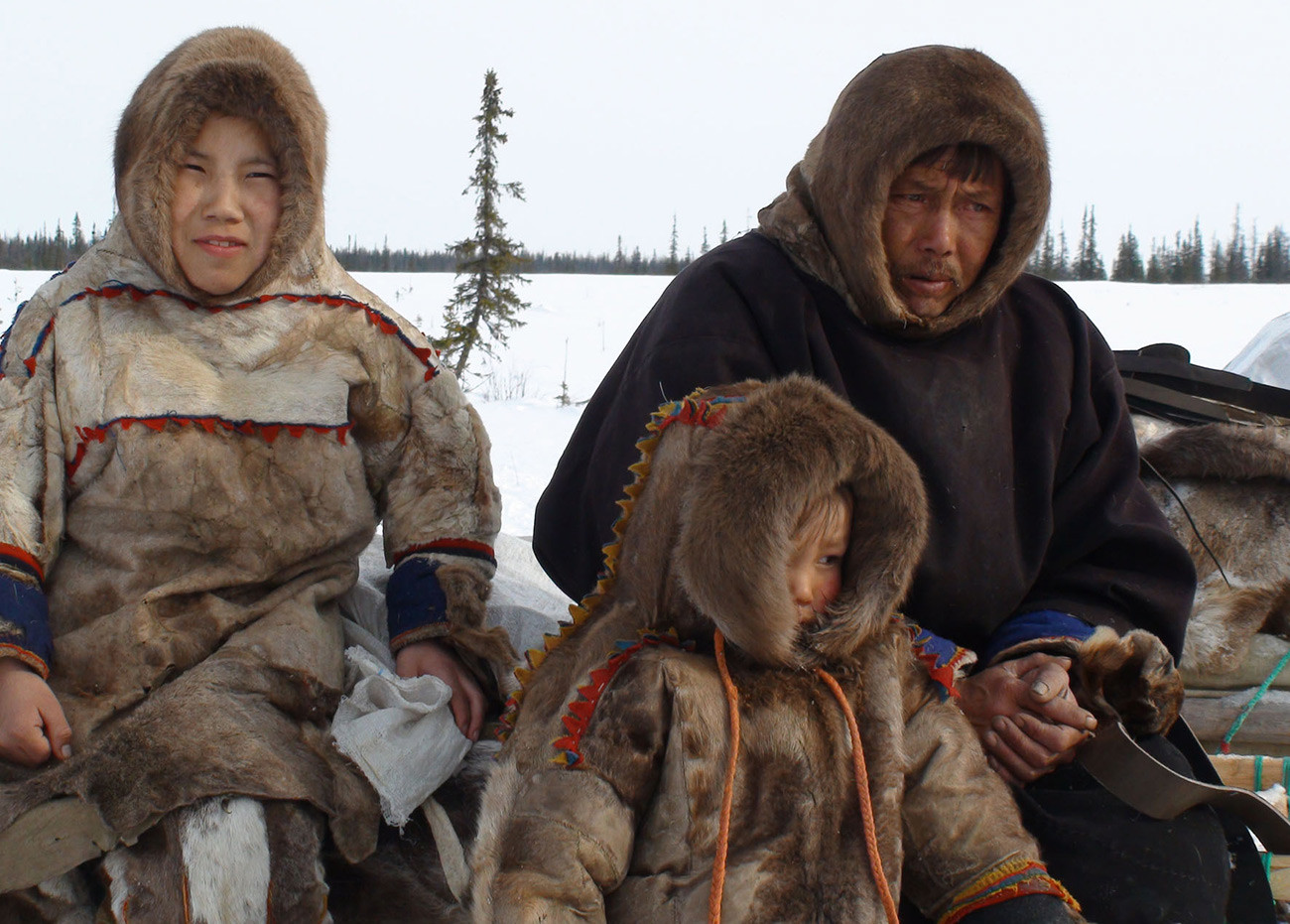 One of the most numerous small ethnic groups in Russia, the Nenets breed reindeer and crack jokes with their gods. According to the 2010 census, they number 44,640.

The Nenets live in tundra regions and migrate across the vast open spaces on the coast of the Arctic Ocean from the Kola Peninsula to the Taimyr Autonomous Okrug. Like their ancestors, they dress in animal skins, use reindeer-drawn sleds, and build tents made, like their clothes, from reindeer skins.

In the middle of the chum (as the Nenets call their homes) stands a cast-iron moveable stove, known as a burzhuyka (“bourgeois woman”). Stoking it is an exclusively female duty, which girls are taught to do from a very young age. 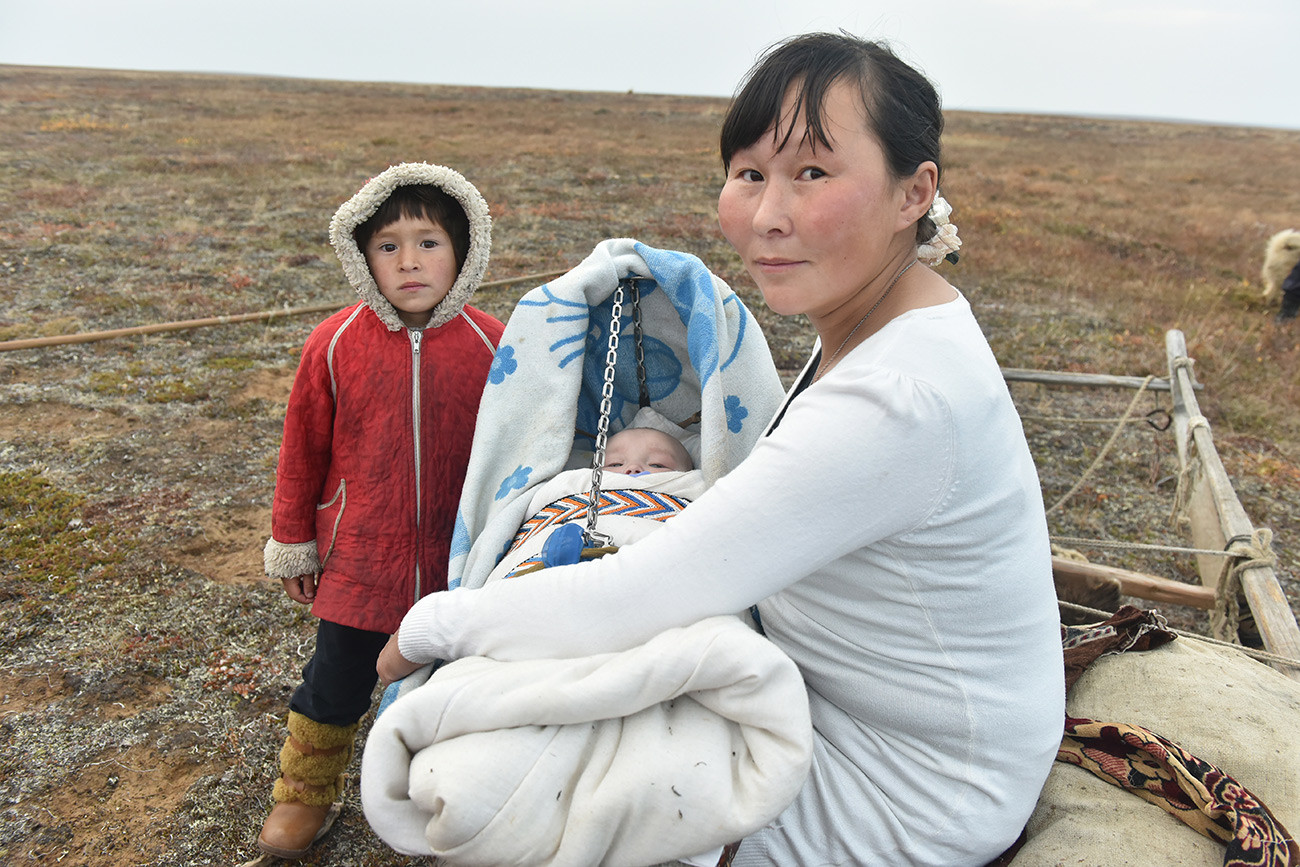 A Nenets woman with her children.

“The pre-entrance area of the chum is the female part. The women are astonishingly good at controlling the fire. Even small girls freely handle the coals, and kindle and fan the flames. They use a variety of fuels — from black moss to dwarf birch trees,” says Andrei Golovnev, ethnographer and author of a documentary about the life of the Nenets.

The men spend this time mostly resting — and only in their half of the house, where the Nenets believe that spirits reside. The division into male and female quarters is so rigid that if a woman accidentally steps into the male section, a smoke-purification ritual has to be performed. Pieces of beaver hide are placed in a vessel with coals, and the woman cleanses herself with the smoke — only in this way can she atone for such serious misconduct. 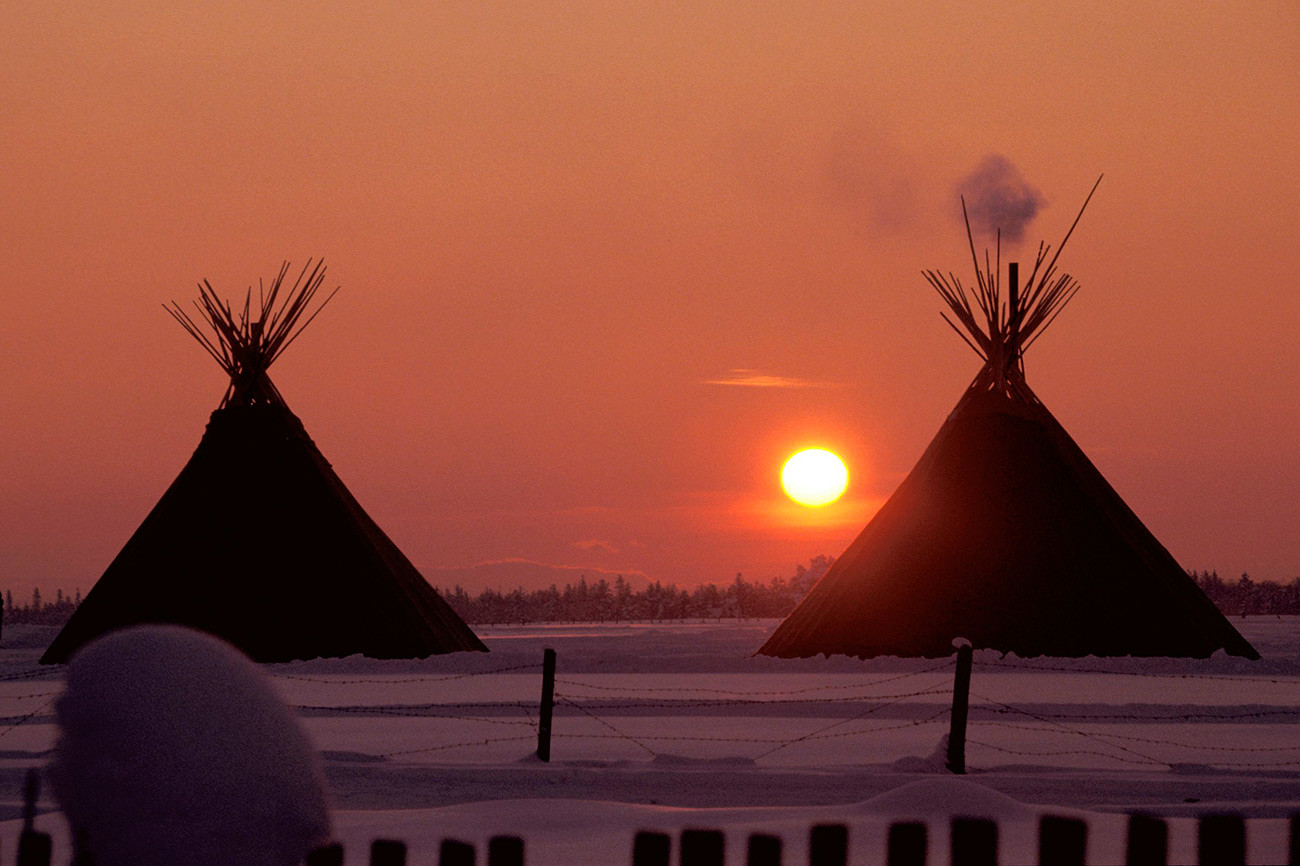 A chum is what the Nenets call their homes.

Although the benefits of civilization have not completely bypassed the Nenets (many have mobile phones and even snowmobiles), they have nevertheless preserved the lifestyle of their ancestors to this day. Reindeer farming and fishing remain their traditional occupations. 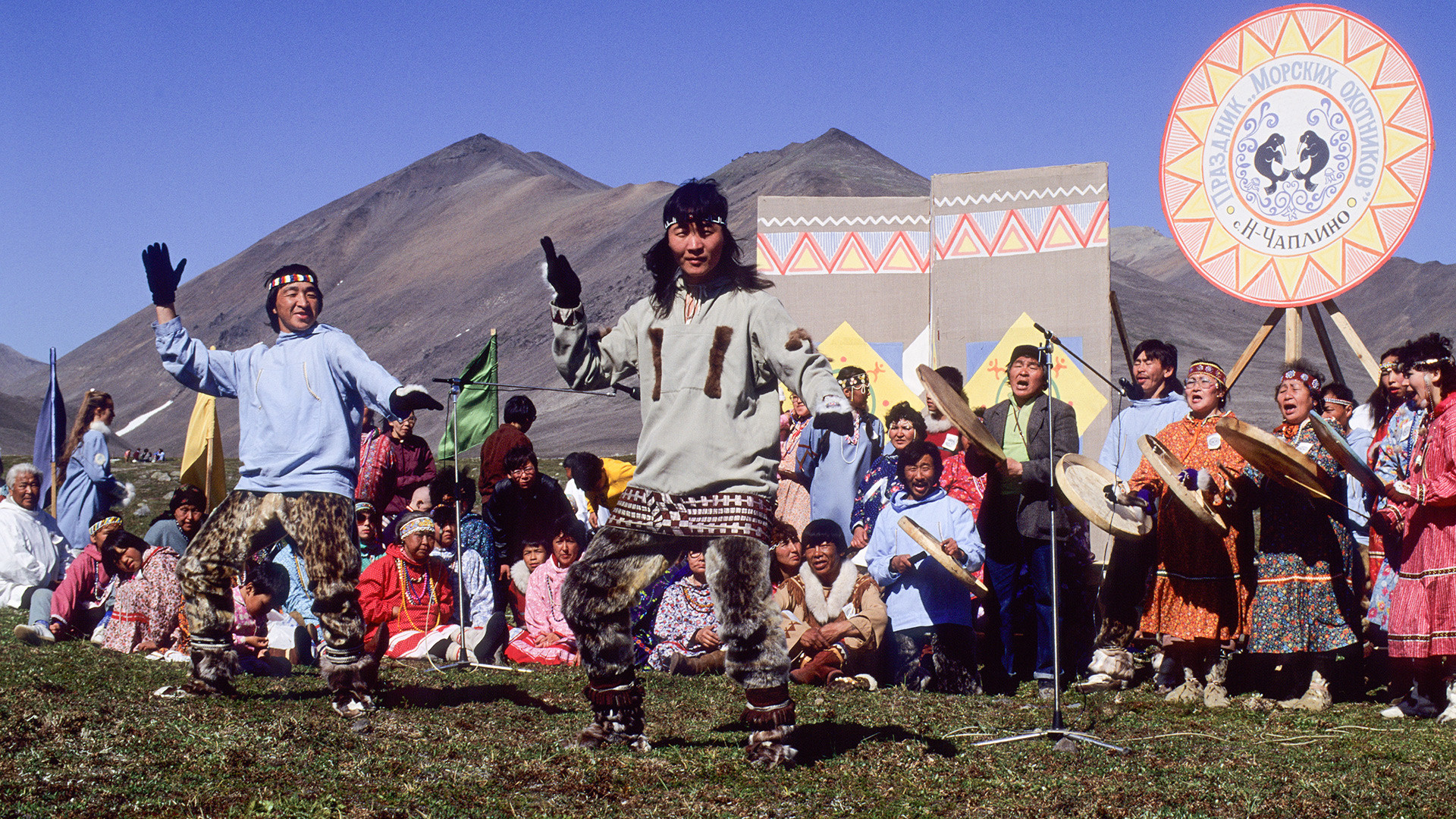 There are around 150,000 Eskimos worldwide, but only 1,738 of them live in Russia. They live on the coast of Chukotka, hunt walruses, and visit their kin across the border in the United States.

Eskimos who live in Russia are known as Siberian or Asian Eskimos. They are closely related to Eskimos in the United States.

“St Lawrence Island (Alaska, USA) is located 60 km from the Chukchi Peninsula. They [American and Russian Eskimos] are related. Before the Cold War, until 1948, they had very close contacts. Archaeologists have found US whiskey bottles at the site of old Eskimo settlements. Before the establishment of Soviet power in the 1920s and 30s, if Asian Eskimos spoke a European language, it was English, not Russian,” says Dmitry Oparin, ethnologist and lecturer at Moscow State University. 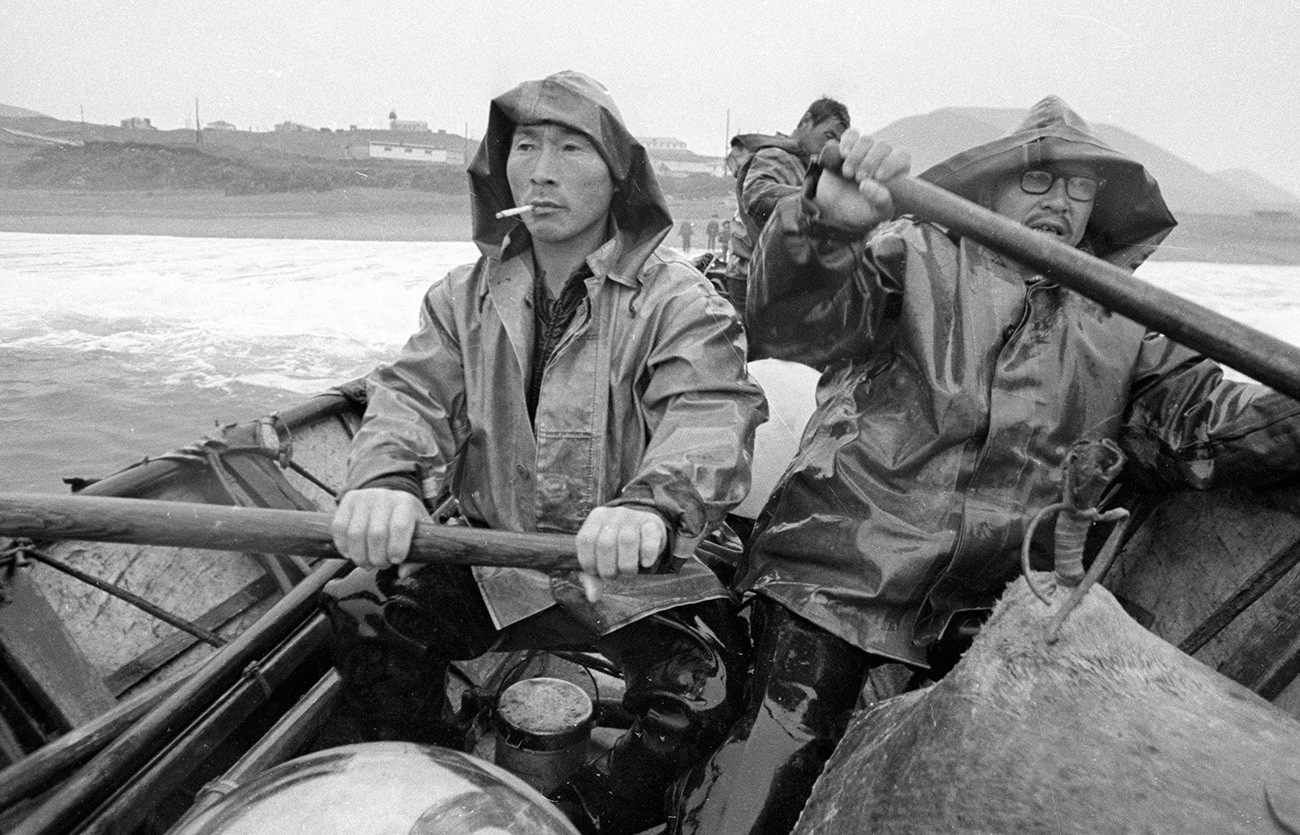 For a long time, Eskimos in Chukotka were isolated from the influence of the rest of Russia. “Russian influence in Chukotka became noticeable only when Soviet power arrived here in the 1930s. Before the revolution, the American influence was felt more. Adult Eskimos spoke English and worked on US whaleboats. Many had spent time in US cities on the west coast and got hold of western goods, including alcohol, chewing gum, weapons, clothes, and jewelry,” Oparin explains.

“They haven’t stopped hunting. Villagers hunt walruses, whales, seals, sea hares, and foxes in groups. They are expert hunters, and these skills get passed down from generation to generation,” says Oparin. 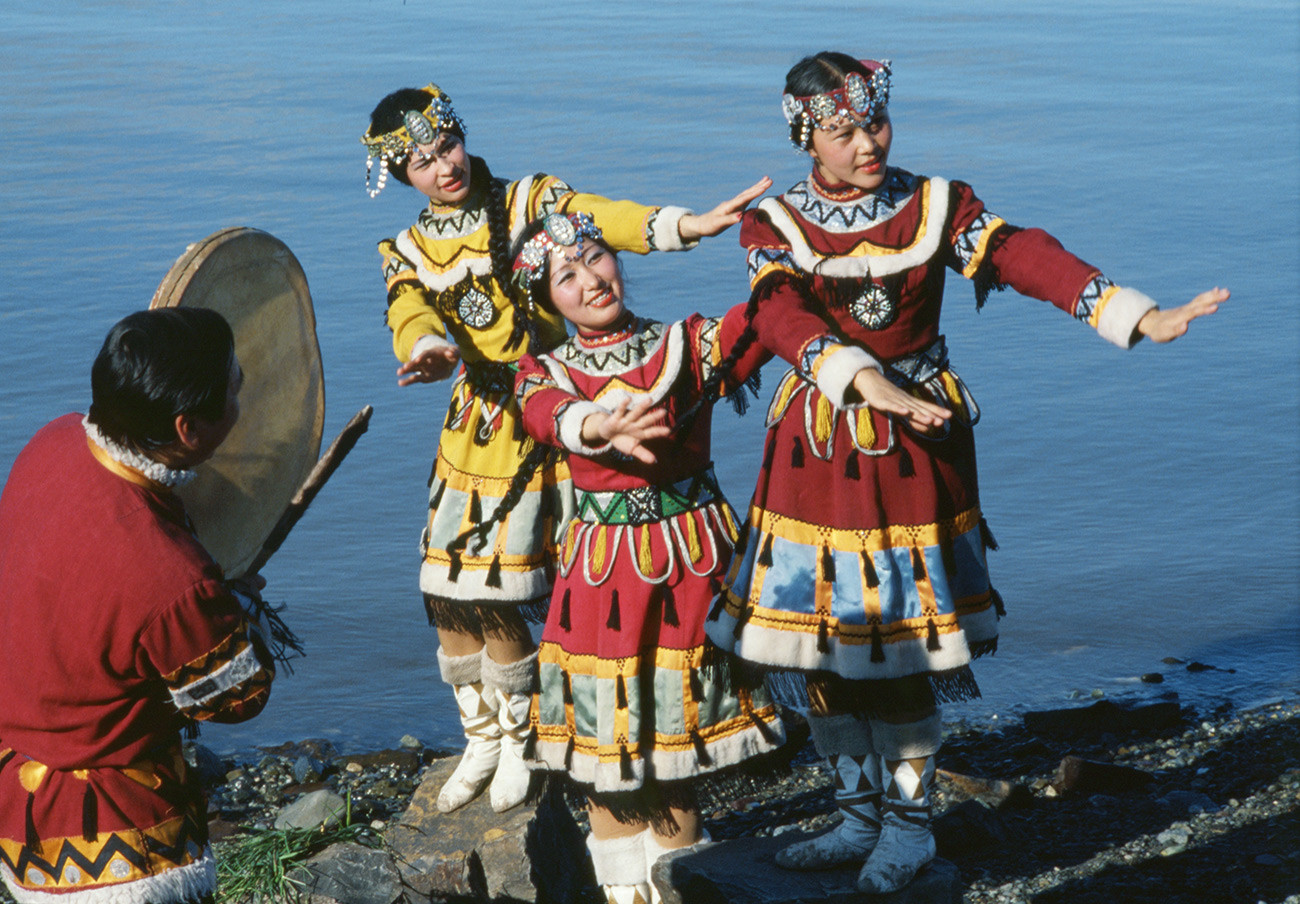 The Eskimos retain the belief system of their ancestors and continue to practice shamanism.

Many people think that Eskimos live in igloos, but modern Eskimos in Russia live mainly in villages inside ordinary huts. However, they retain the belief system of their ancestors and continue to practice shamanism.

A curious fact is that the indigenous people of Chukotka do not need a US visa to visit Alaska. A special US-Russian agreement provides for a visa-free regime for indigenous peoples living on either side of the border. 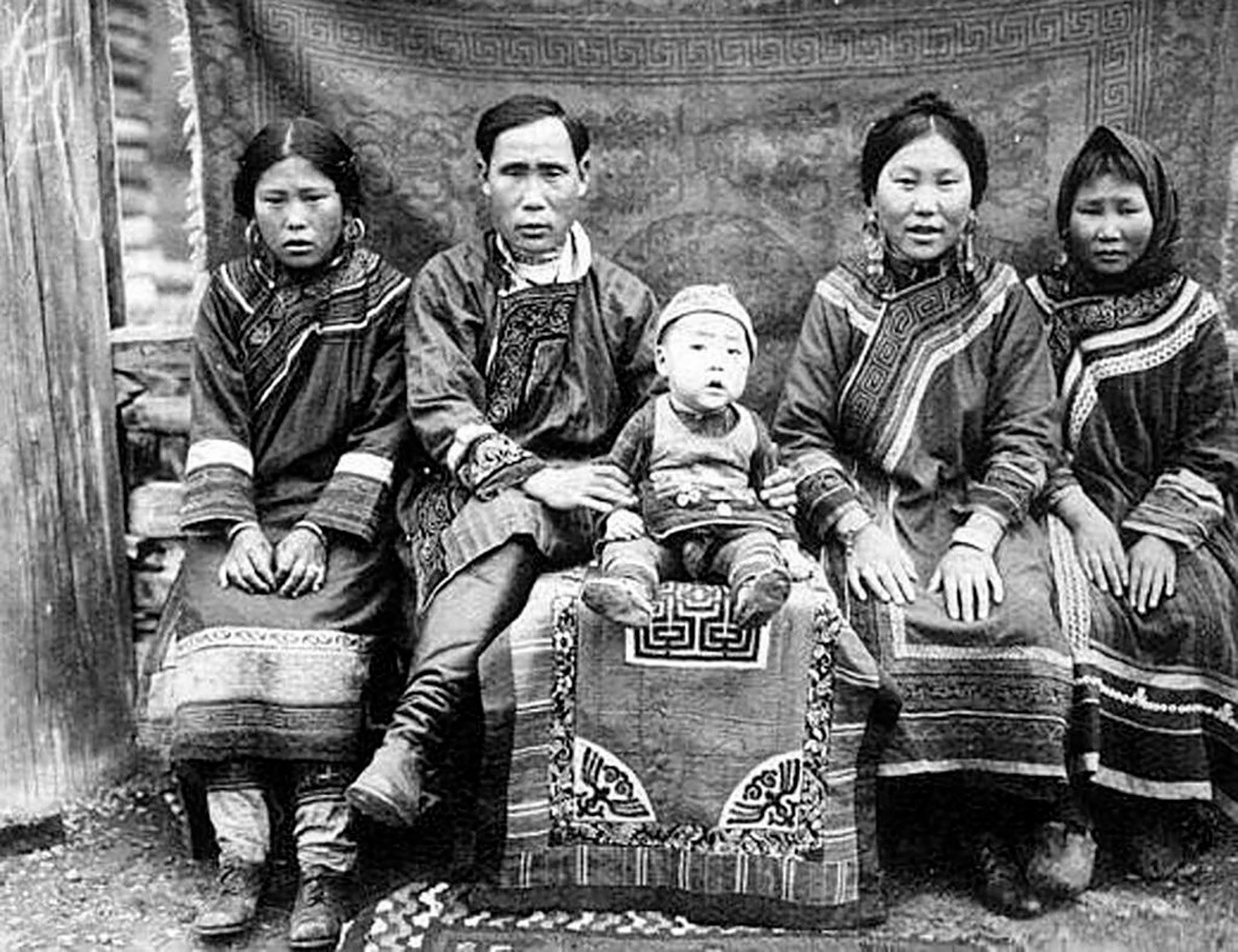 Living along the Amur River and its tributaries in Russia’s Khabarovsk Territory is another small indigenous people — the Nanai.

According to local folklore, the Nanai descended from a taiga tiger and the daughter of the first human couple on Earth. Another perhaps more likely version of events states that the Nanai people came to Russia from China, although experts say that their ethnogenesis is more complex.

The Nanai worship a sun deity and pray to him until dawn. They also believe in the spirits of their ancestors. Men hunt and fish, while women sew and process animal hide and fish skin. 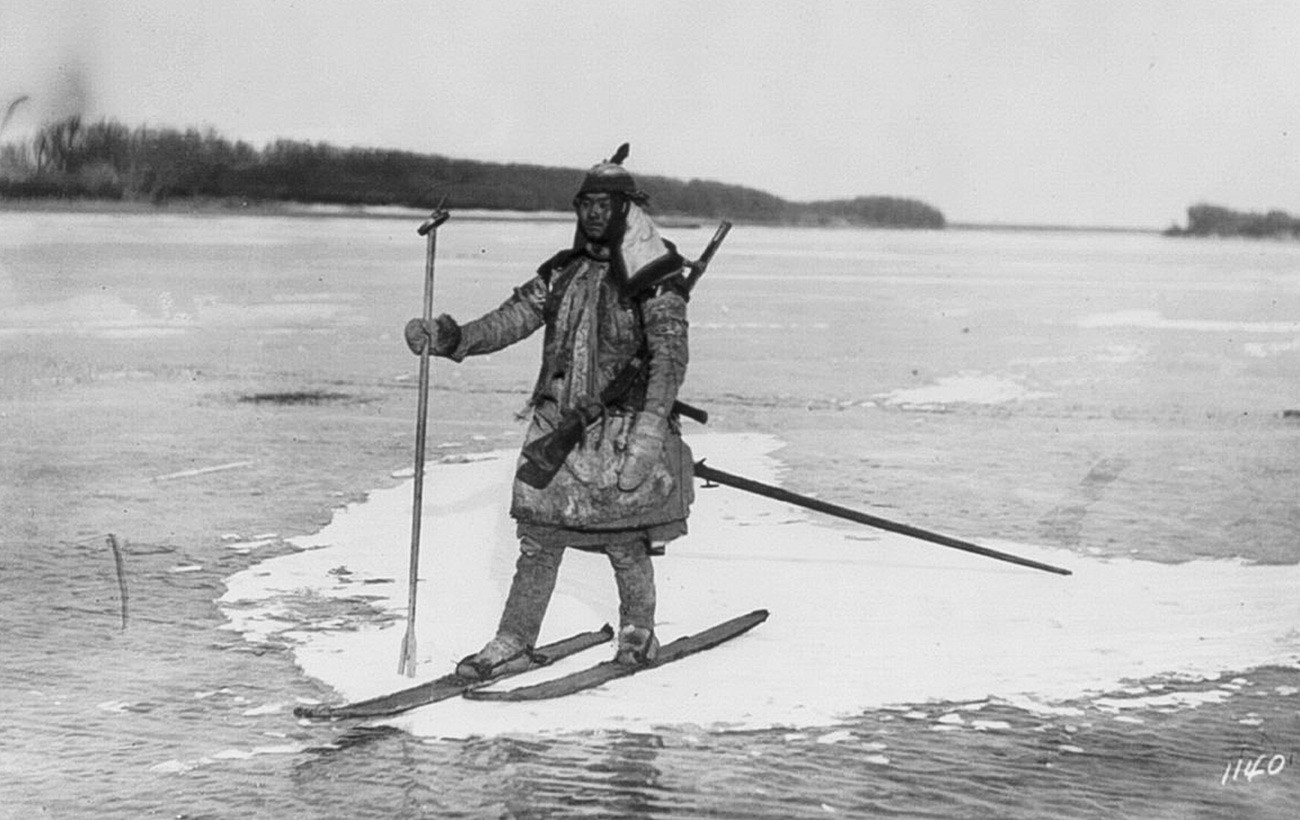 The Nanai live in close contact with nature, and their belief in the spirit world runs very deep.

“Before chopping down a tree, the head of the family... approaches the tree, stands in front of it for a long time, and mentally speaks to the spirit inside: ‘I am going to hurt you, but you will live again in a different incarnation. I will build a boat to transport my family. Please forgive me, but I really need you. Let me cut you down.’ Then he listens and looks for signs. If a bird begins to sing, that is a good omen. It means the tree has given its consent,” says Evdokia Gaer, a doctor of historical sciences who is of Nanai origin.

Nanai girls can be married off in early childhood, at the age of six or even earlier. “If someone has a daughter and their neighbor or friend has a son, the parents arrange for them to become husband and wife when they grow up,” says Gaer. 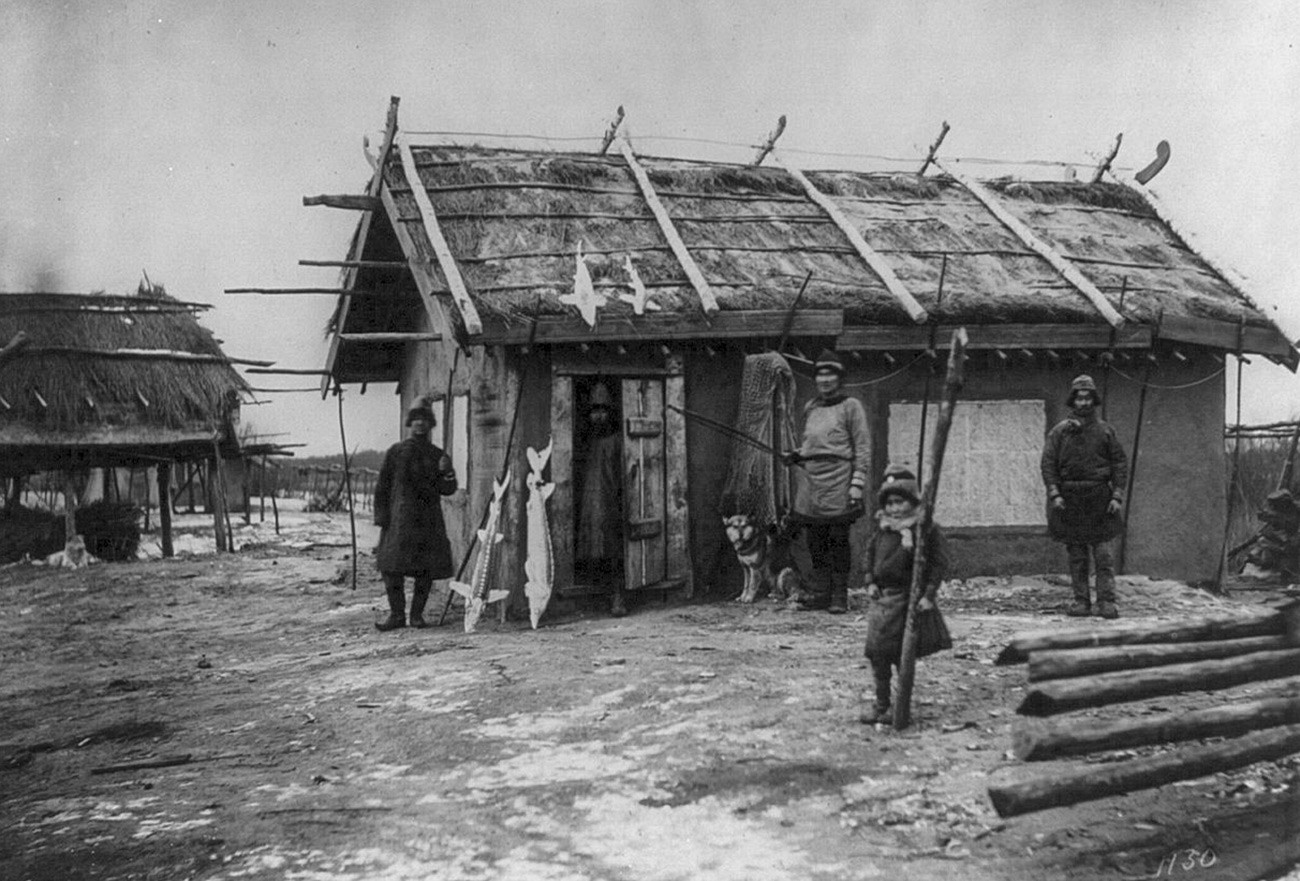 A Nanai village along the Amur River, north of Khabarovsk.

When the wedding day approaches, the young bride is dressed in a silk dressing gown. The fabrics are brought in from neighboring China, where the Nanai have relatives who were separated after the final demarcation of the Russian-Chinese border along the Amur River.

Like the indigenous people of Chukotka, small ethnic groups living in the regions bordering China enjoy a special visa-free regime. They can obtain permission to cross into China right at the border point, but for this they need an invitation from the Chinese side.

Click here to read why Native Americans and Siberians are cousins.