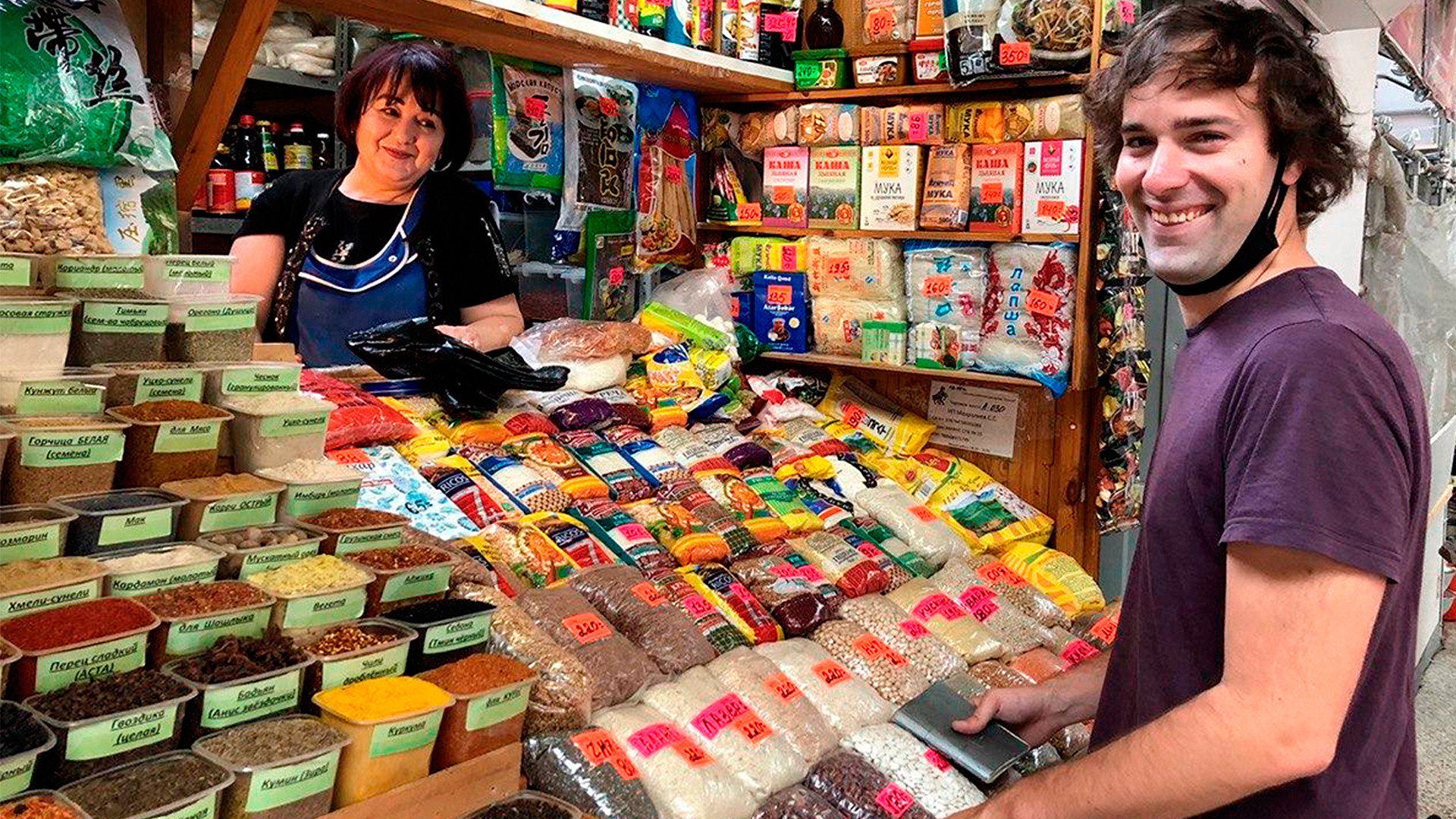 Josh Nadeau
While large, Western-style supermarkets are found nearly everywhere in Russia these days, opting to frequent traditional markets instead gives you a taste of the local culture. Nowhere is this as true as in Russia’s northern capital.

Aisle upon aisle of dried goods, stationary and bagged snacks. Nearly limitless variations on tomato sauce. In-house butchers, bakers and cheese hawkers – all under rows of sterile, fluorescent lights. For some, supermarkets are a sign of ultimate convenience and, thus, progress.

But for others they represent a cold, overly-processed way of getting food and other everyday products. Especially in a city like Saint Petersburg, where traditional markets are still a personal and accessible alternative for your shopping needs. 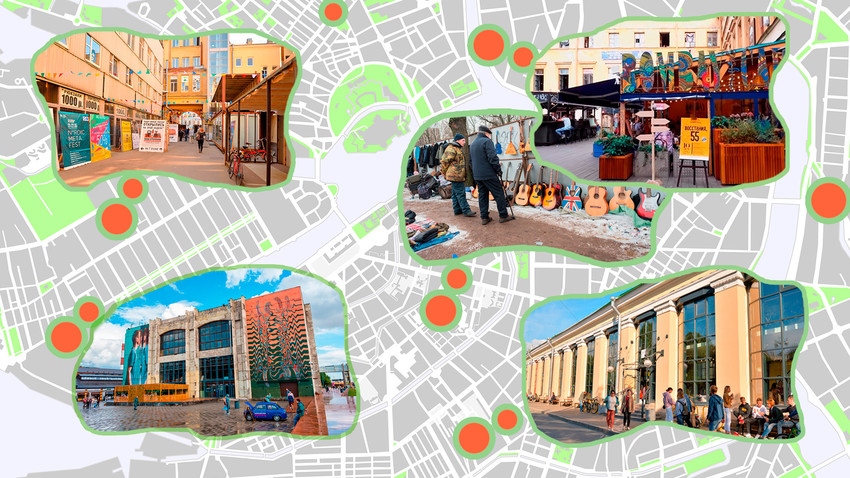 If you’re new to the oddball world of Russian markets, don’t worry! We’ve prepared some tips and tricks to help you make the most of the Northern Capital’s authentic shopping scene. Along with a few recommendations, of course, for places to find fresh veggies, Soviet trinkets or the latest hipster delicacies.

The first thing you need to remember is don’t believe the stories you hear about how terrible or unpredictable the markets are. Many of the worst rumours are urban legends dating back to the turbulent 1990s, a time when the economy had crashed and people often cheated each other to survive. Locals have been frequenting markets for decades since then, probably because they haven’t recently been poisoned, robbed or kidnapped. Chalk the rumours up to unfair stereotypes and go check the markets for yourself.

The next thing you want to do is make friends with the people selling the goods you buy on a regular basis. It pays to have a regular, go-to babushka for your vegetables, nuts or fish – they’ll want to keep regular business, making it more likely to give you the freshest goods in stock. They’ll also give you advice on where to get hard-to-find products, and maybe even give you a discount every now and again. 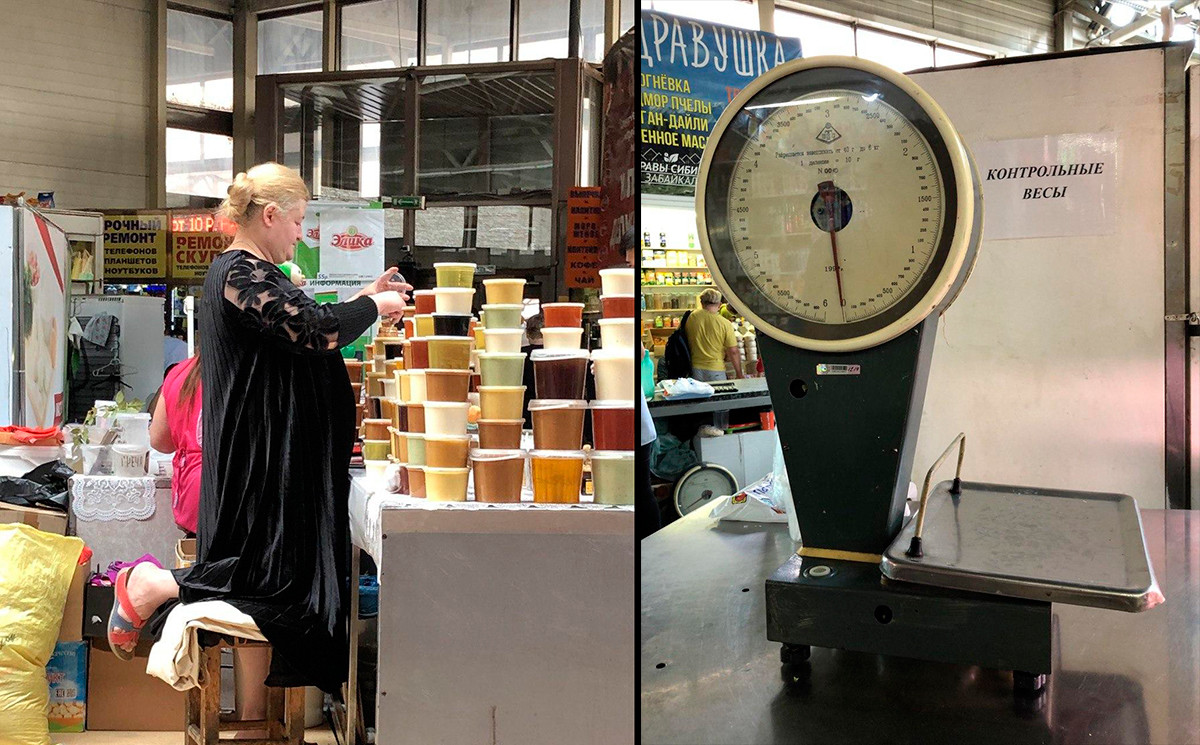 If you think something is too expensive, feel free to haggle. Prices are often set by the seller and if they know you’re buying in bulk then they might give you a better deal. Some sellers, especially the first time they see you, may ask a higher price at first, thinking you may not know what a product is worth. This is especially true at flea markets. It has to be said, though: maybe those tomatoes are expensive because they’re tastier! Ask for a sample and find out.

And don’t forget to experiment! If one seller makes you feel uncomfortable (or if you think you’re not getting the best deal), go ahead and try another. That, and different foods are cheaper during different times of the year, giving you a good excuse to buy something new once it’s in season. You’ll never know when you’ll find a new favorite.

With the basics out of the way, you’re now ready to hit up the different kinds of markets Saint Petersburg has in store. We’ve listed a few popular ones below. 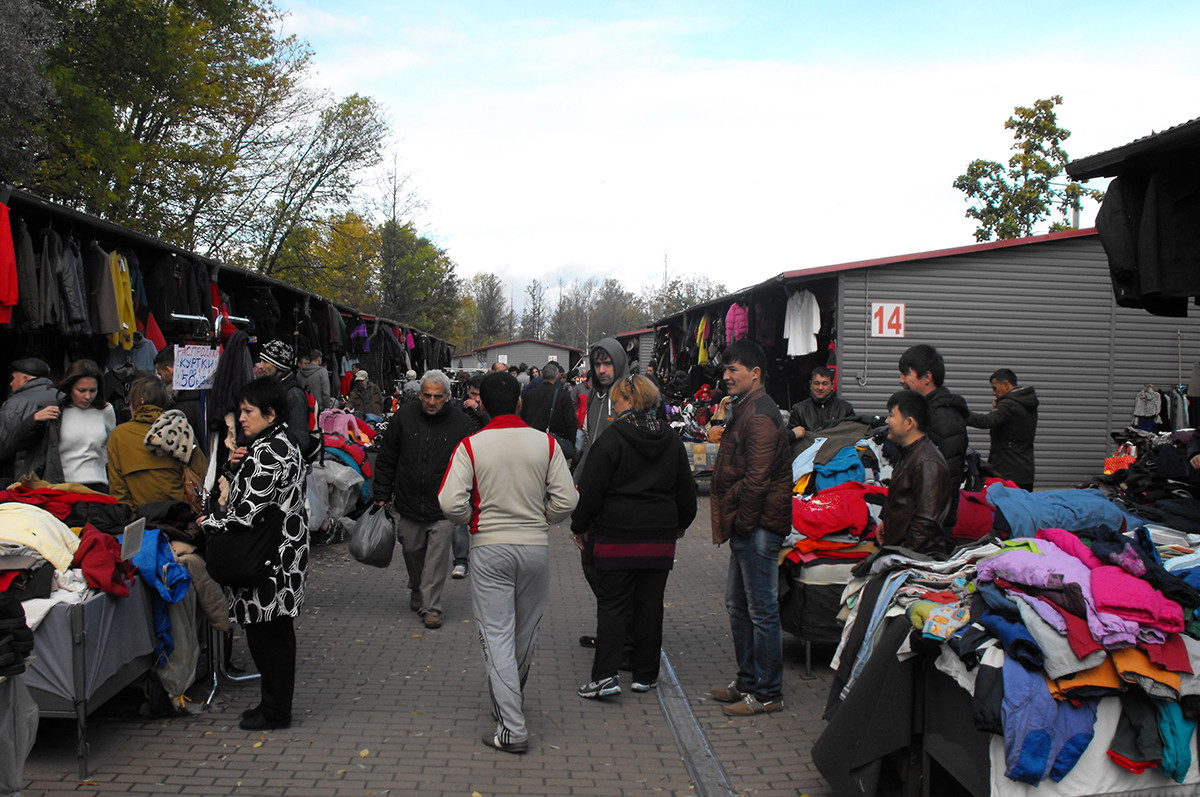 You’ll often find random sellers hawking trinkets on the embankment or in the city’s larger parks, but for the ultimate post-Soviet experience you’ll have to head north of the center to the Udelnaya Flea Market. 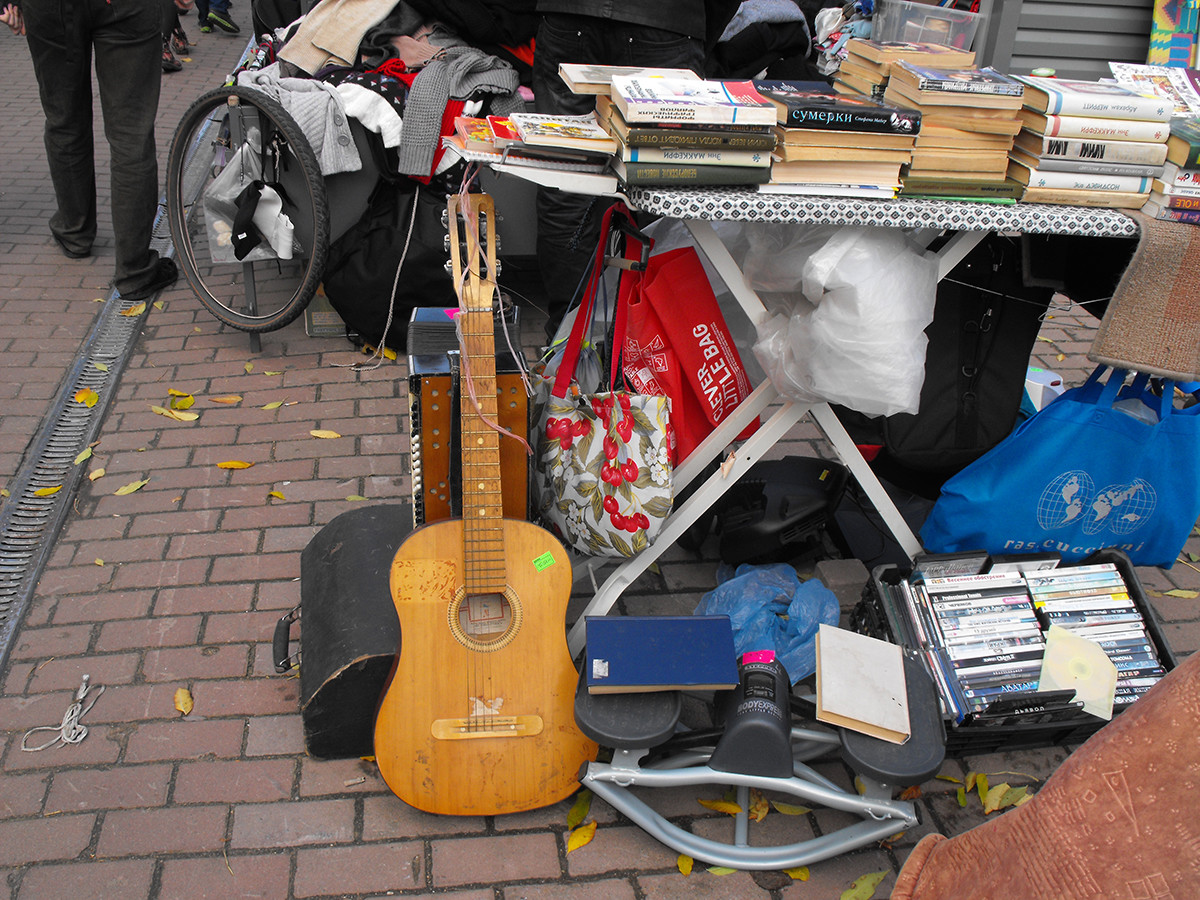 Handily located a few metres away from Udelnaya metro station (near the railway stop of the same name), the entrance is small and not immediately obvious. But once you’re inside, you should press your way through the stalls of fur coats, Adidas knock-offs and camo suits until you get to the true attraction: the informal, open-air emporium all the way at the back. 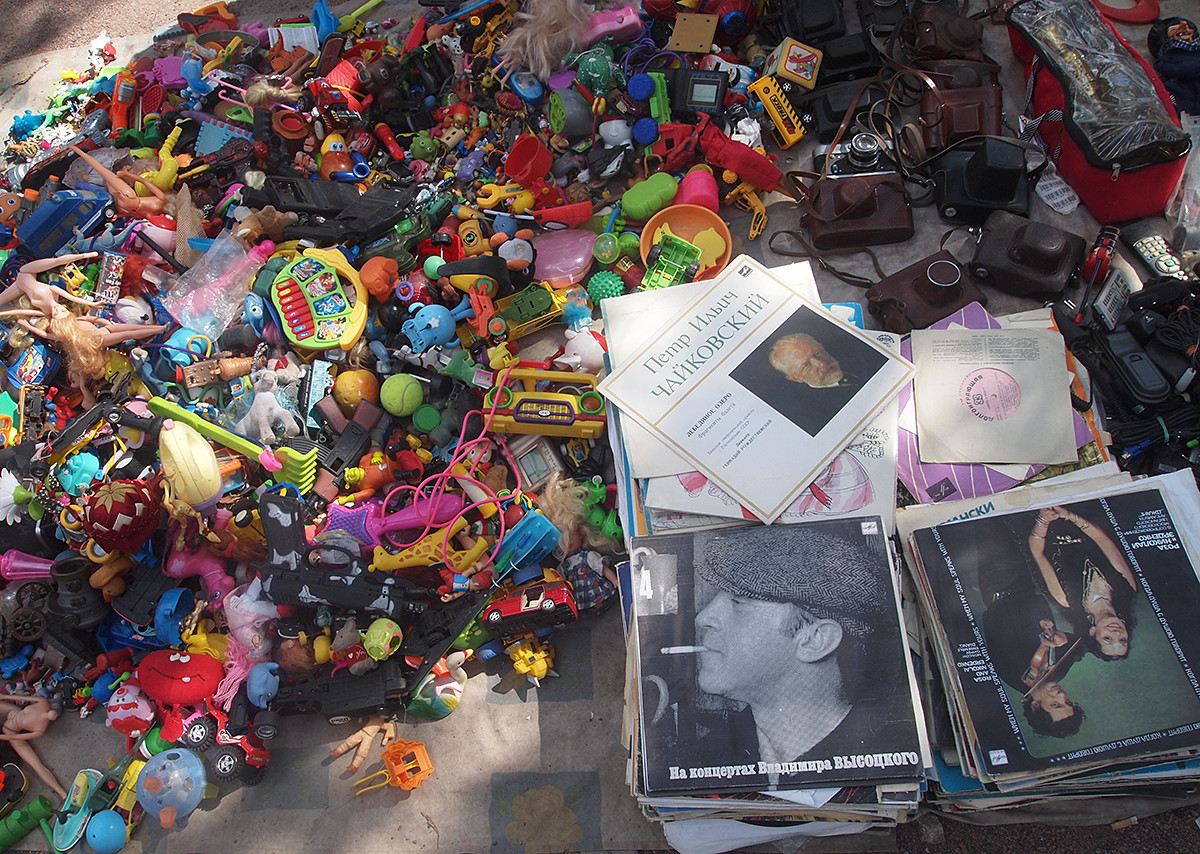 It’s here that you can find everything from old vinyl records, Lenin busts, Soviet money, rare books and even uniforms from World War II. So if you’re looking for an authentic souvenir, forget the overpriced boutiques on Nevsky Prospect. Take an adventure up north and find yourself something to truly remember the city by.

Classic, Soviet markets can still be found in many places within the city center and beyond. It’s here that you’ll be able to find dozens of stalls sporting fresh fruit and vegetables, often carted in from Krasnodar region and the Caucasus in Russia's South or even Central Asia.

The most notable is probably Sennoy Market, located at the intersection of three central metro lines. The main action takes place inside a special building the size of a football field, with sections for vegetables, fruits, dairy, nuts, honey, pickled goods, grains, tea, candy, meat, fish and even a small cafe. 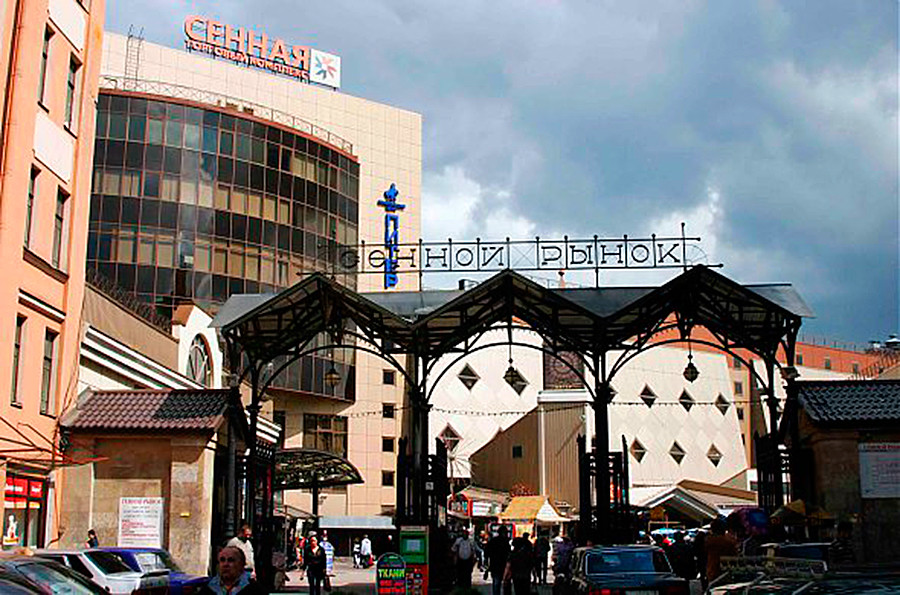 Large-scale Soviet markets like this can seem overwhelming at first, but make sure you take a good walk around the whole place before deciding which kiosk to buy from. Try to see which sellers are popular with locals – you’re likely to find better prices that way. 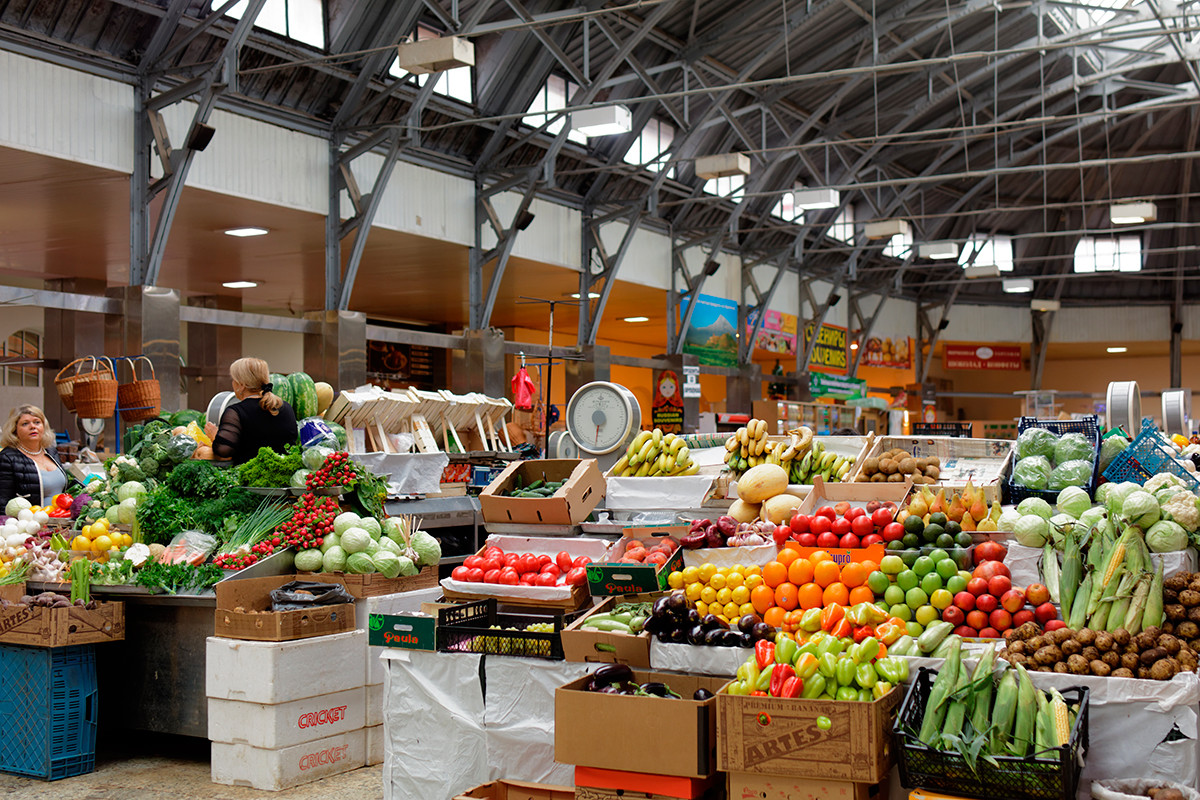 If this kind of thrill is for you, check out the equally central Kuznechny Market, or the expansive Apraksin Dvor just down the road from Sennoy. 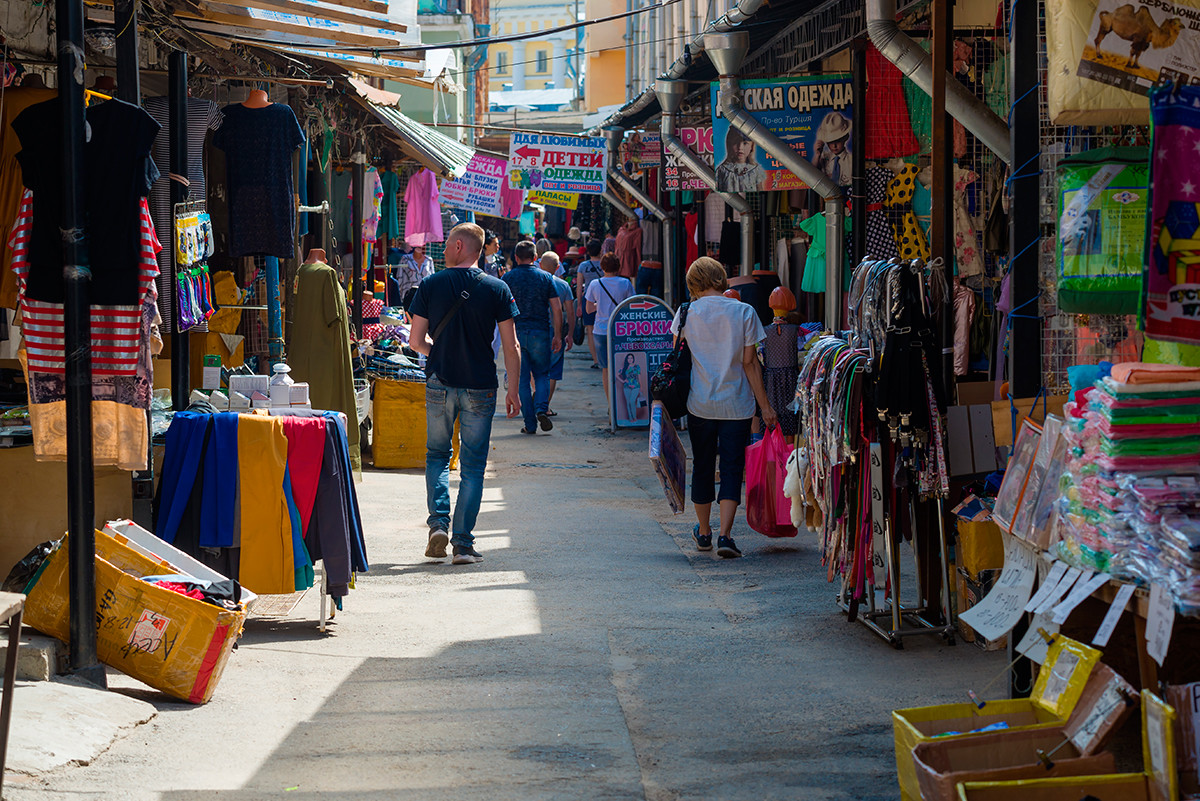 Some markets have ‘sanitary’ days (often once a week) where everything is closed for a good cleaning, so do your research ahead of time and don’t turn up on the wrong day.

If pickled beets or bundles of dill aren’t exactly your style, fear not! St. Petersburg is Russia’s cultural capital, and thus has a growing number of markets and boutiques with tasty, and tasteful, options to satisfy your inner hipster.

When it comes to food, the Vasileostrovsky Market (located on the central island of the same name) is hard to beat. If you’re looking for a novel culinary experience, you can find it all: Tatar-fusion cuisine, vegan options, burgers made with local berries or even savoury donuts – rounded off with artisan lattes or Dagestani tea, of course. 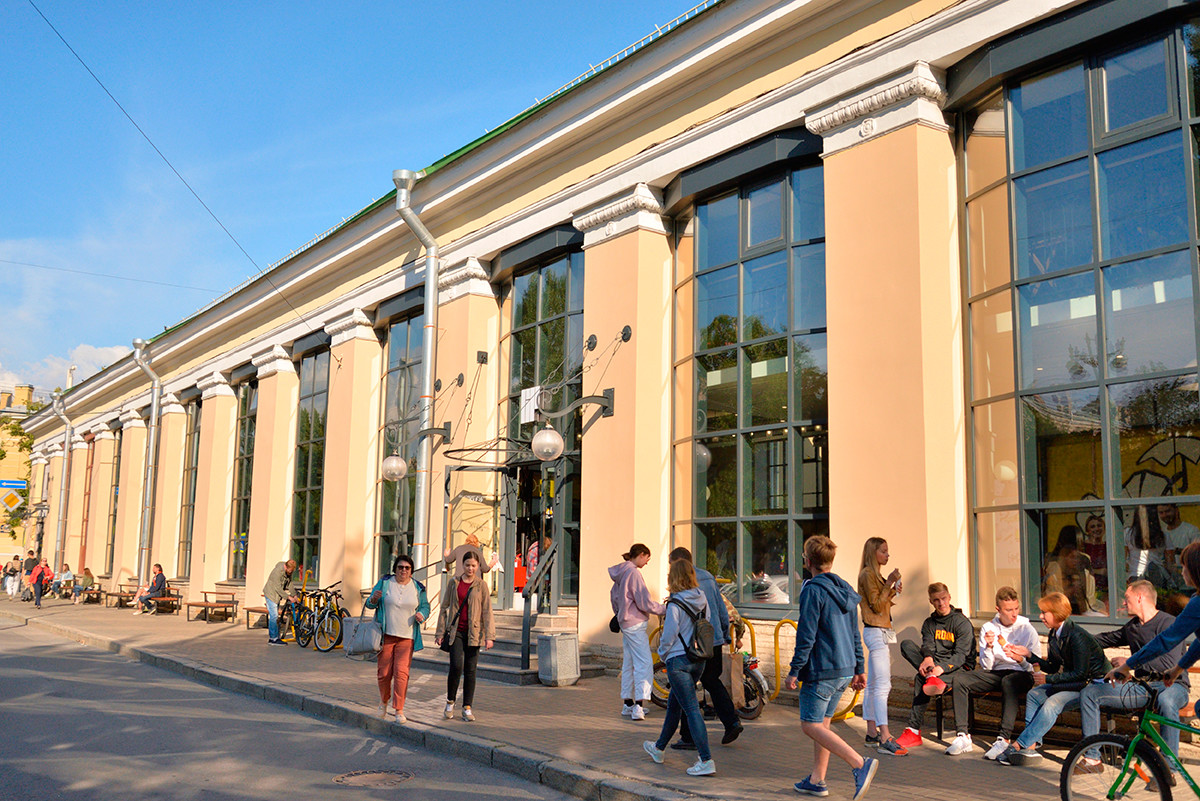 There’s even a conventional food market located in the next hall over – quality is assured, though the prices will be higher than in a Soviet-style market like Sennoy or Kuznechny. 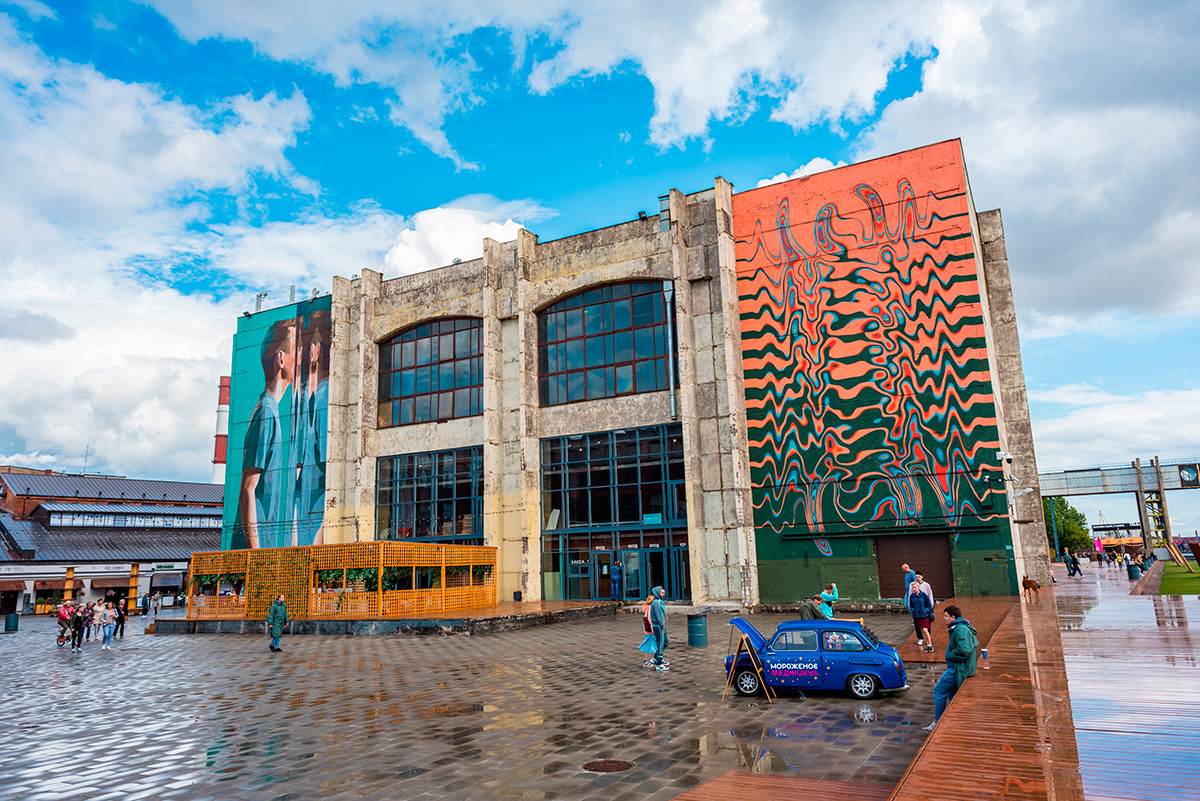 Other hotspots for fairs and market days selling souvenirs, buttons, trinkets and designer clothing include Sevkabel Port, the city’s latest place to be, as well as mainstays like Golitsyn Loft and Loft Project Etagi. 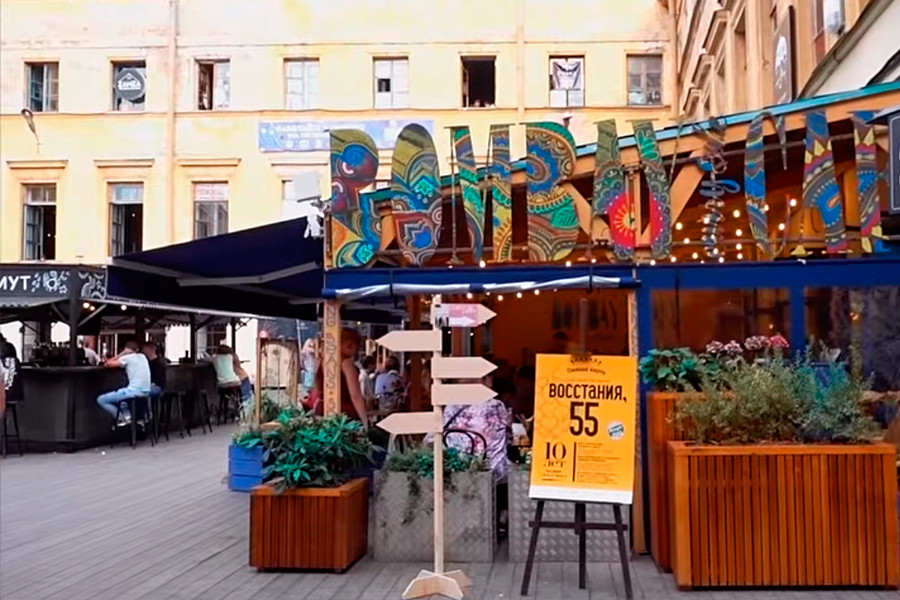 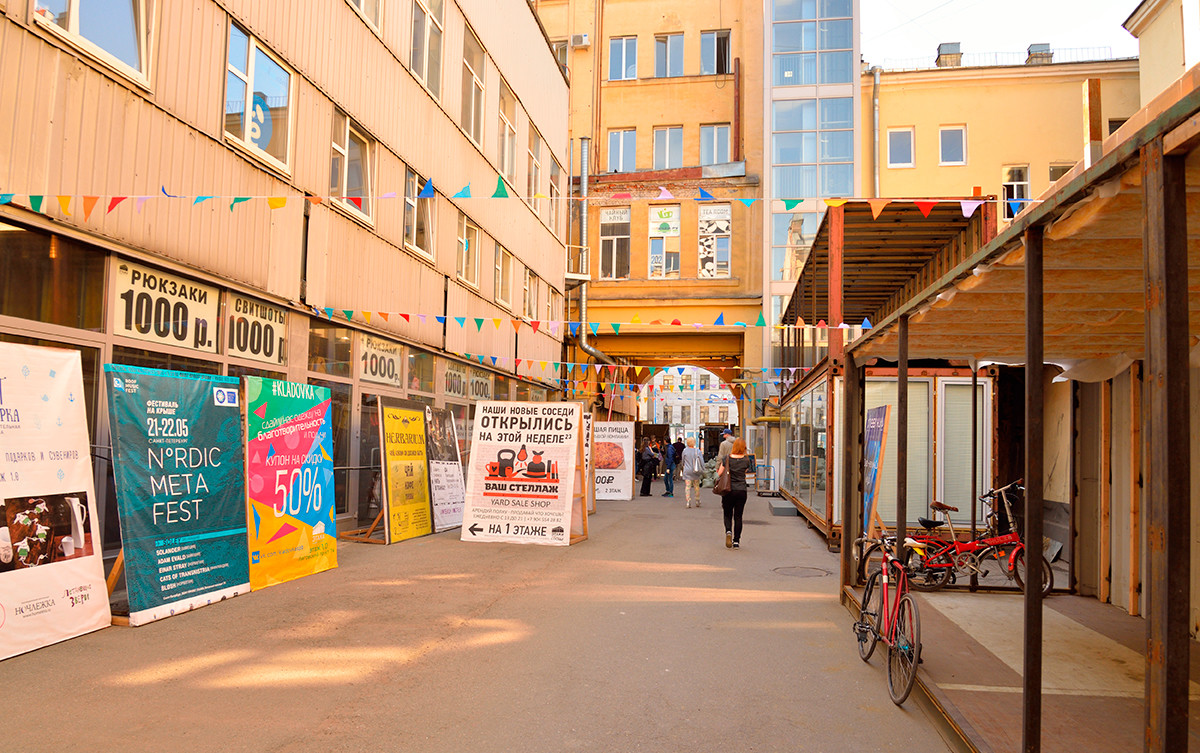 There are, of course, many more St. Petersburg markets to explore, and you’ll never know what exactly will be in stock, but that’s part of the fun! So embrace the Russian spirit of avos (abandoning yourself to chance and hoping for the best) and find yourself a new favourite stall! While markets seem to be disappearing in the Western world, in Russia they’re still a phenomenon with a long shelf life, indeed.