Why you simply must visit Krasnoyarsk – according to locals 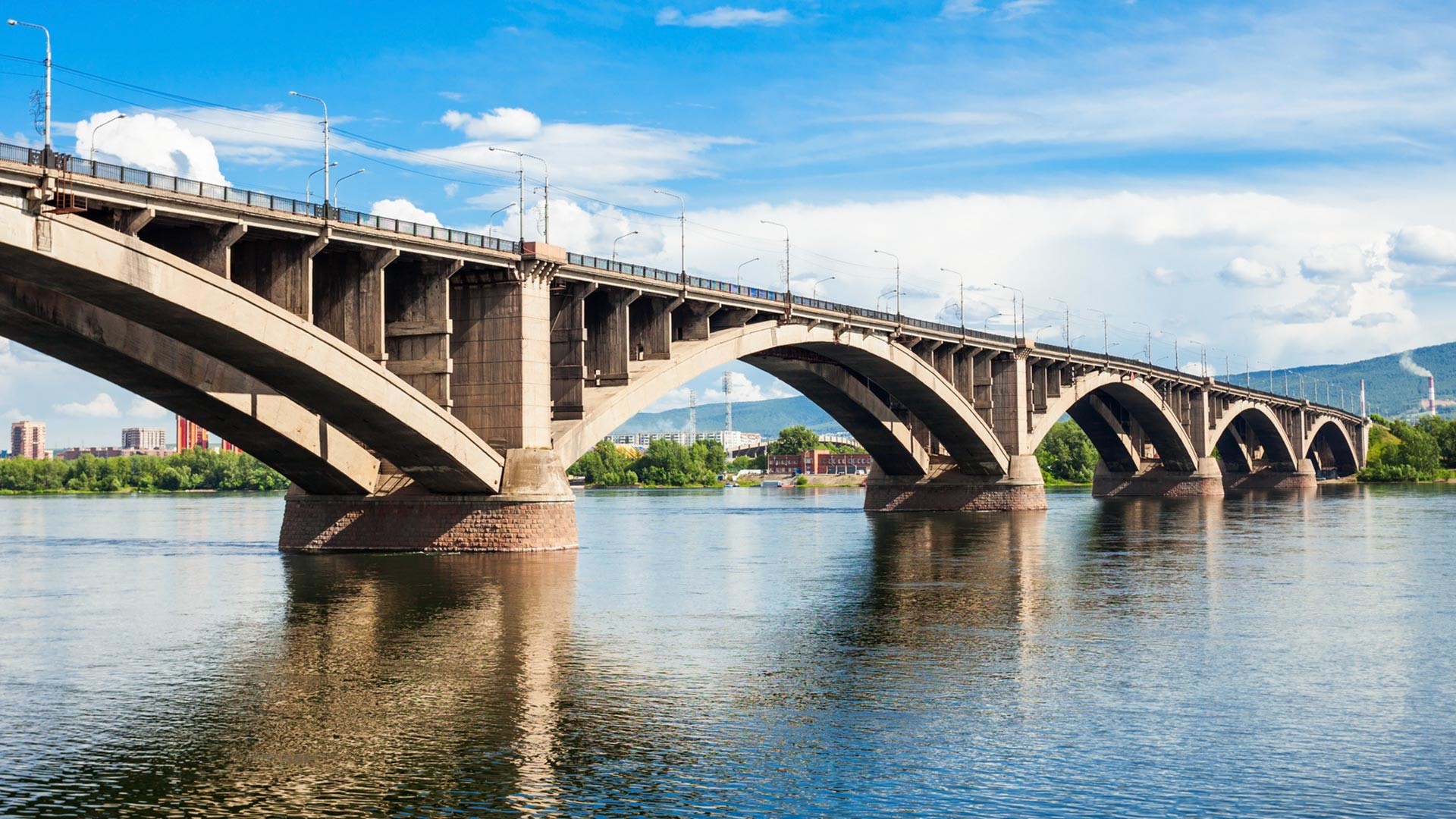 Legion Media
This guide to Krasnoyarsk includes tips from locals as to what to see, do and eat in this large Siberian city, and what to take home as a souvenir.

Until recently, all residents of Russia had first-hand experience of Krasnoyarsk practically on a daily basis. That is because the city's main sights - the Communal Bridge, the Chapel of Paraskeva Pyatnitsa and the Krasnoyarsk hydroelectric power station - were depicted on the 10 ruble bill. However, since 2012, no new 10 ruble bills have been printed, so the low-value banknotes have become something of a rarity (besides, more and more Russians are switching to non-cash payments anyway). 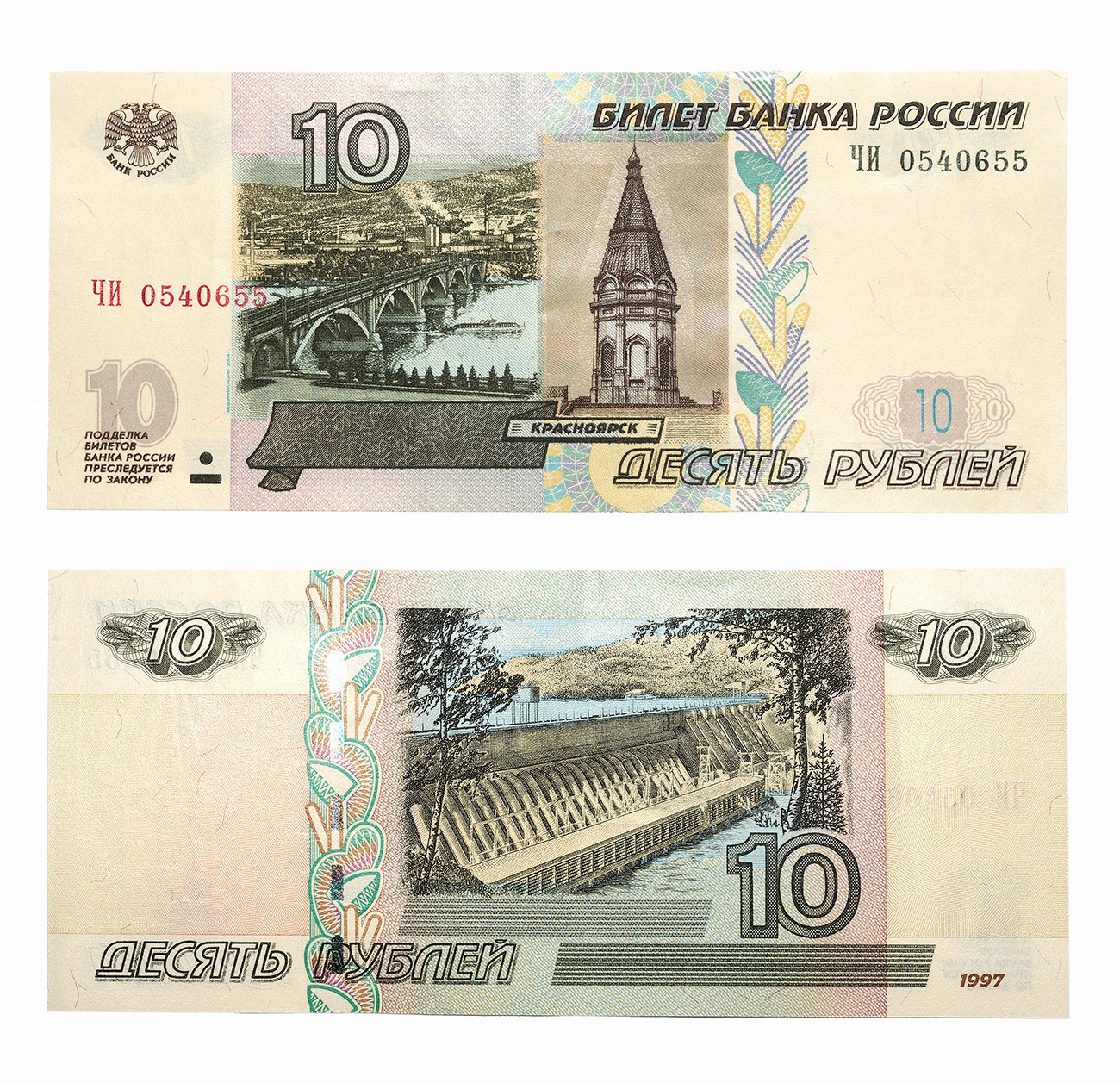 Krasnoyarsk was founded in the 17th century on the mighty Yenisei River. In the language of the local indigenous Khakass people, “yar” means a high bank, so “Krasny Yar” means “a beautiful high bank”. These days Krasnoyarsk is the capital city of Krasnoyarsk Territory, Russia's second largest region. Its area is larger than the territory of Mexico! It stretches almost across all of Russia from the Arctic Ocean to the Altai Mountains.

Why should a foreigner visit Krasnoyarsk?

“If you are thinking in stereotypes that Siberia is nothing but uninhabited wilderness, you should come and see what it's really like,” says Natalya Aleksandrova, a translator from Krasnoyarsk.

Present-day Krasnoyarsk is a large, lively and busy city, an industrial giant. It is located in the very center of Siberia, more than 4,000 km (2,500 miles) away from Moscow. 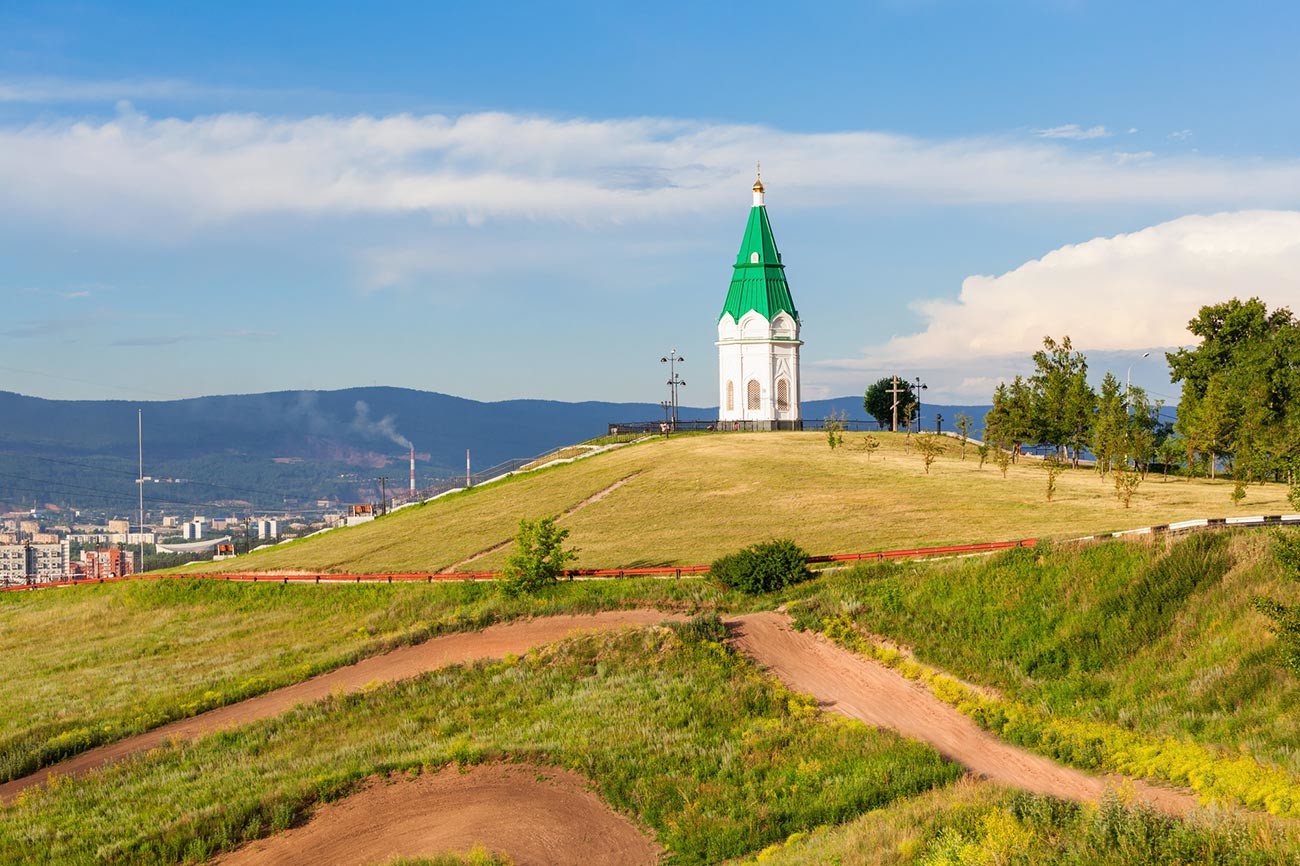 The distances here are so huge, and there is so much open space that one can literally feel the immensity of Siberia. As you stand on the banks of the Yenisei, you feel that you are a tiny human being in the face of enormous and majestic nature.

“Krasnoyarsk is no less but an embodiment of the 'mysterious Russian soul',” says Anna Vostokova, the author of the collection of legends Krasny Yar. It's My Land. She believes that people here are shaped by nature itself.

“Krasnoyarsk is surrounded by thousands of kilometres of taiga, which has never had any human presence. Without the ability to trust each other, without mutual assistance, it is simply impossible to survive in such conditions,” says Vostokova. 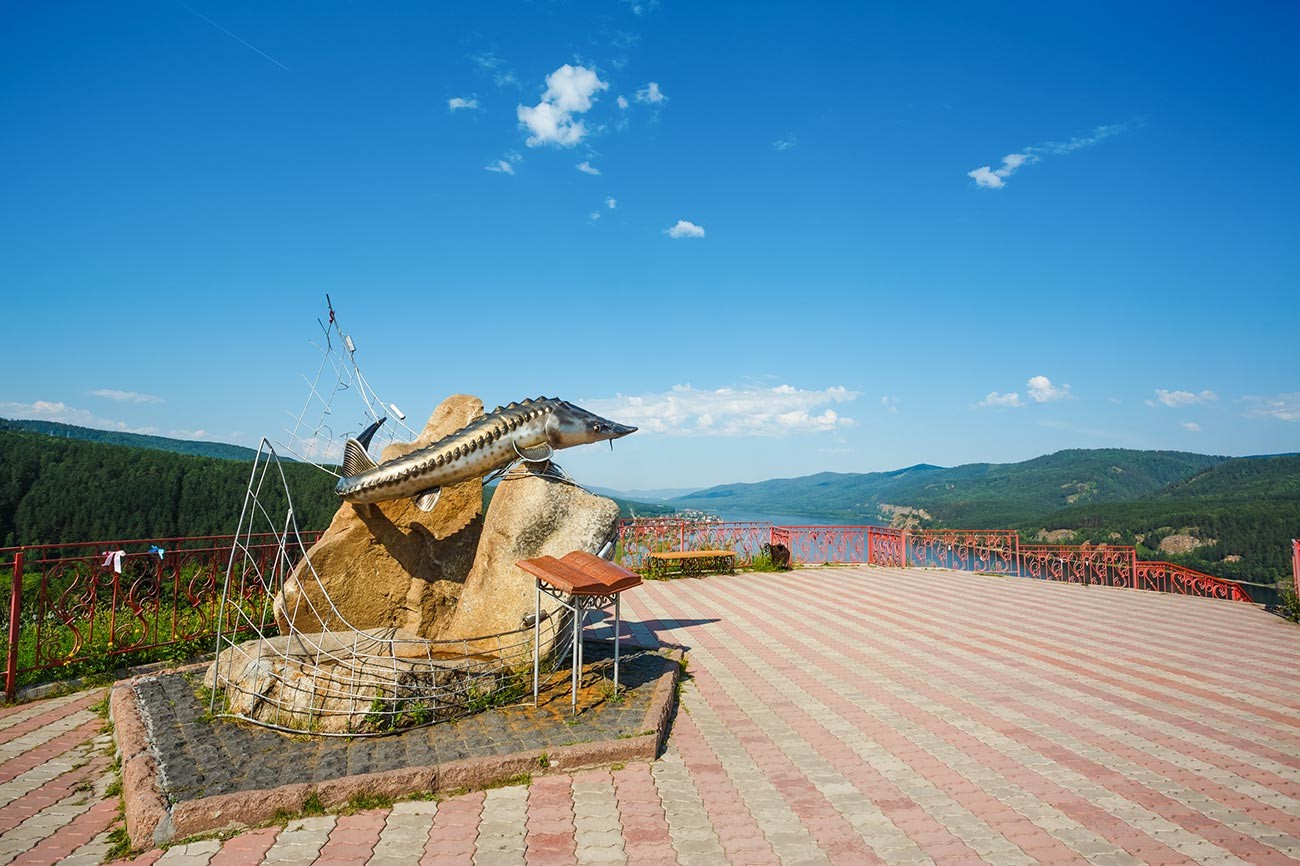 A monument to the Tsar-fish

Siberians are often credited with such qualities as generosity of spirit, recklessness, courage, trustfulness and being true to their word, and this is exactly what people in Krasnoyarsk are like, says Anna Vostokova.

All local residents recommend, first of all, to visit the Krasnoyarsk Pillars (Stolby) national park, 48,000 hectares (185 square miles) of untouched taiga and ancient rocks. “Only 3-4 percent of its territory is open to tourists, but this is enough for an experience of a lifetime. Even if you are not a fan of hiking and rock climbing, a long walk along an easy footpath, clean air and stunning views will not leave you indifferent,” says Anna Vostokova. 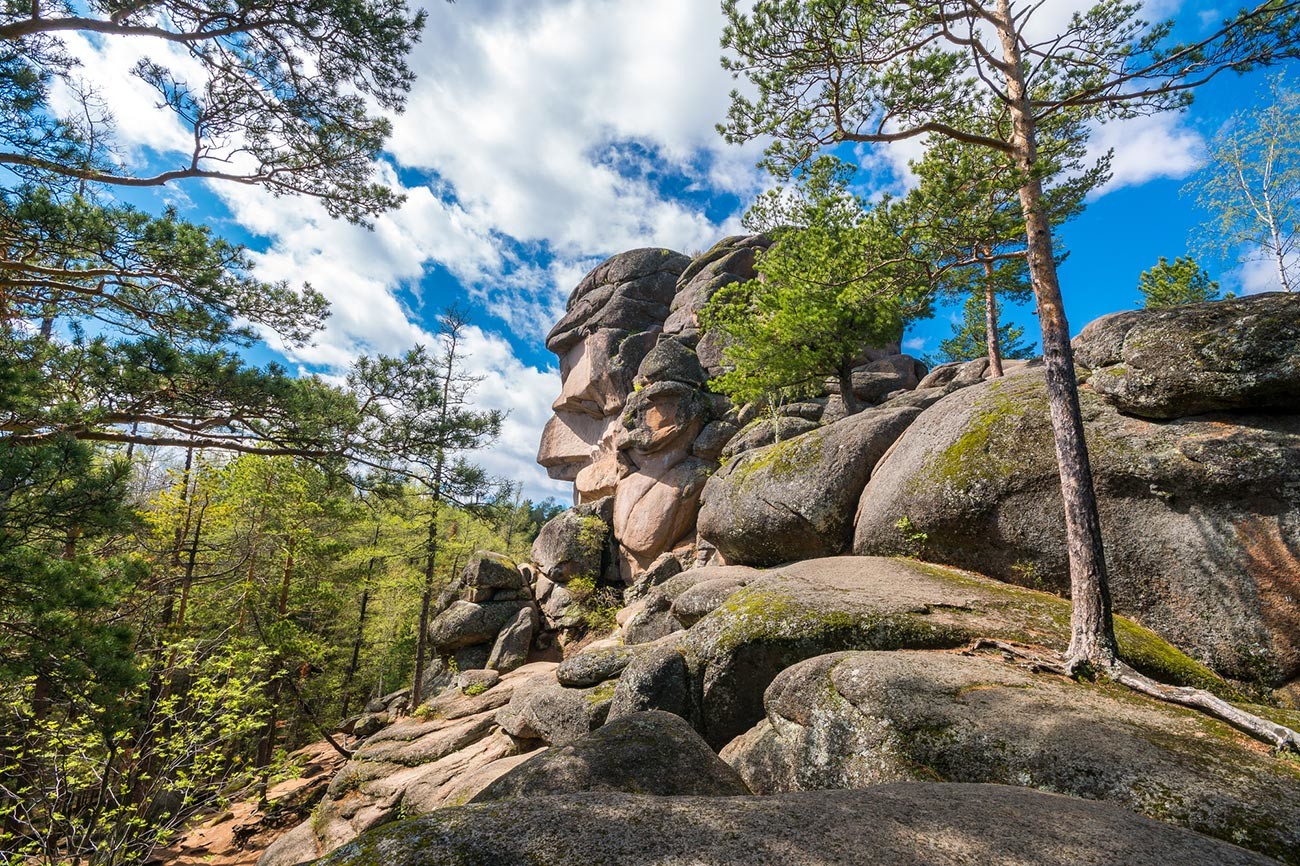 Another popular destination for local residents is Tatyshev Island on the Yenisei, which is an ideal place for a family outing. On its huge green area, you can rent any equipment for outdoor activities. “You can have a picnic, enjoy rollerblading and cycling,” says Anna Vostokova.

“Another nice place to visit for an outing is Bobrovy Log. In winter, you can go downhill skiing there and in summer you can just go up the ski lift to the observation deck or have some fun on a zip line,” says Natalya Aleksandrova. 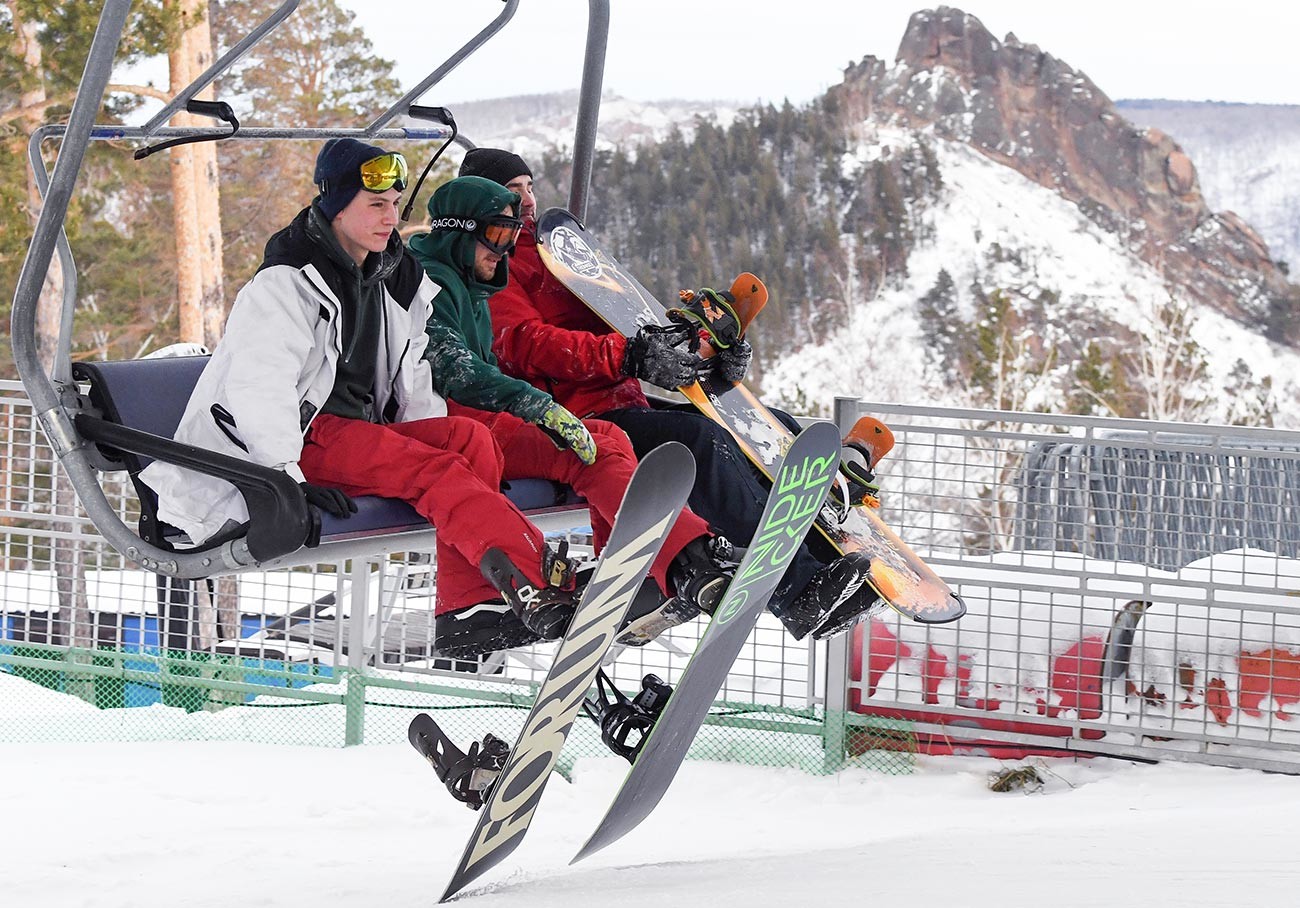 There are two ski resorts in Krasnoyarsk and they never suffer from a shortage of snow: it first falls in late autumn and stays on the ground until mid-spring. Bobrovy Log has 15 slopes with a total length of more than 10 km (6 miles) and a vertical drop of up to 350 m (1,150 ft). The new resort Nikolaevskaya Sopka has three slopes with a vertical drop of 250 m (820 ft). 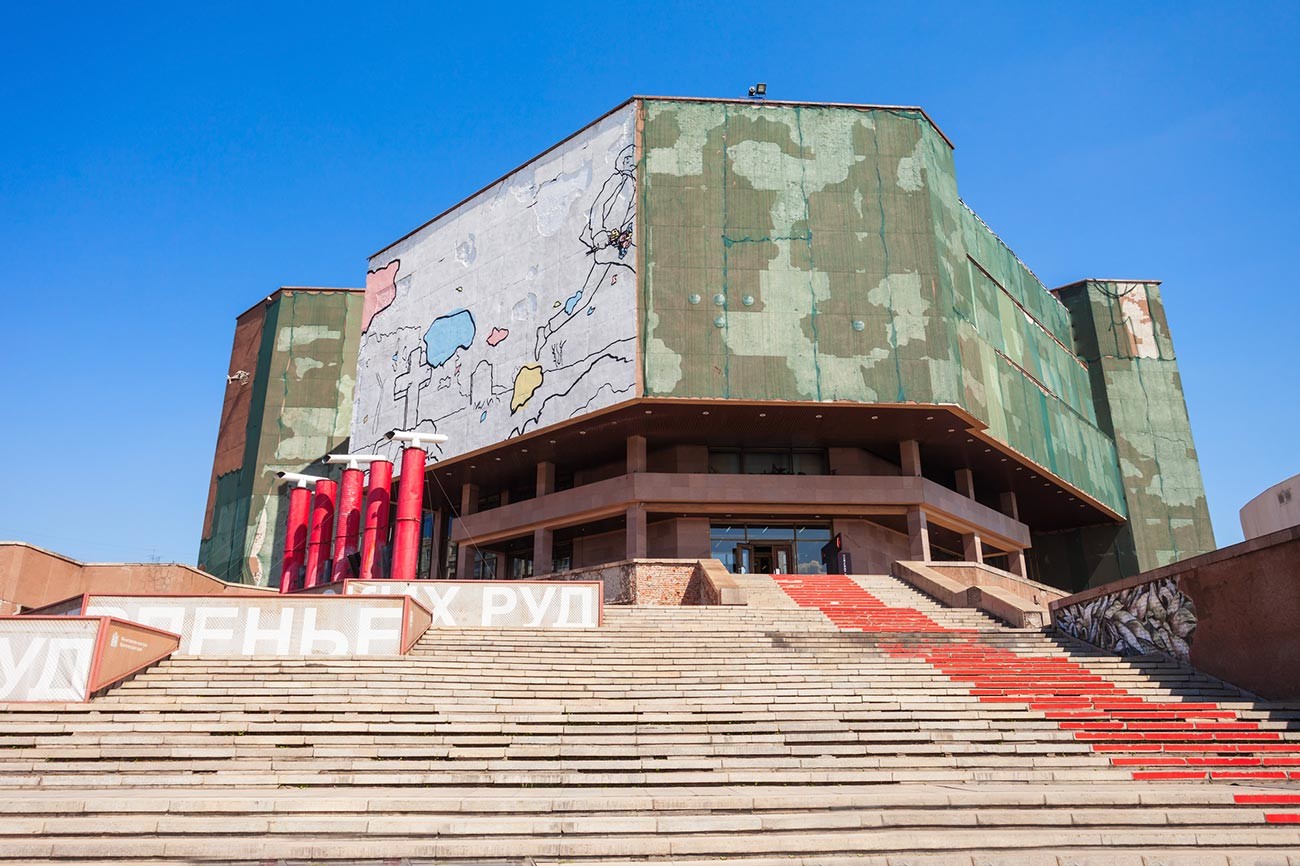 If you are something of a culture vulture, you can pay a visit to the Peace Square museum complex, a unique center of contemporary art. Another place definitely worth a visit is one of the largest and oldest museums in Siberia - the Krasnoyarsk Museum of Local Lore. 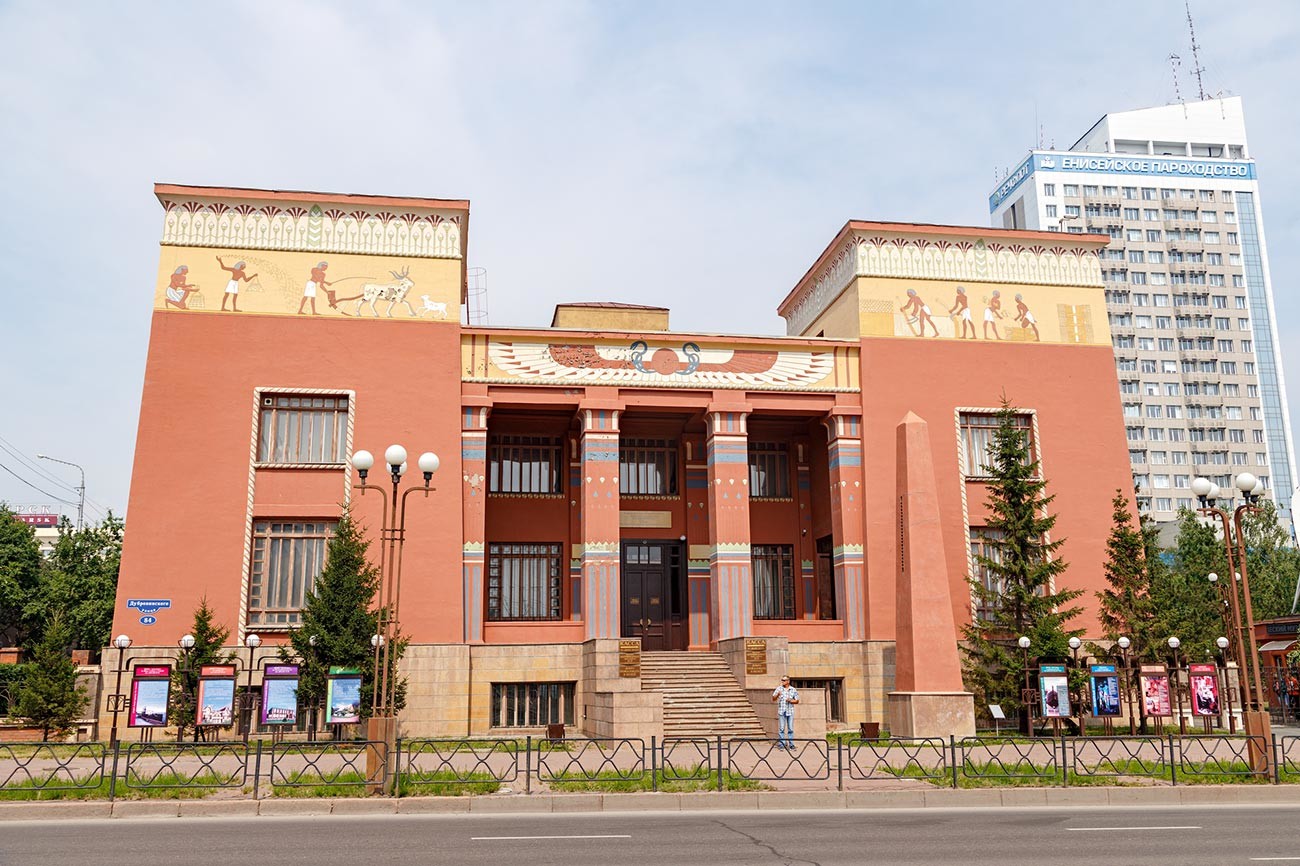 The Krasnoyarsk Museum of Local Lore

Its building, which was built in the late 19th - early 20th centuries in the Egyptian style, is located on the Yenisei embankment near the picturesque Communal Bridge.

Natalya Aleksandrova recommends taking a walk along the central Prospekt Mira avenue, with its numerous old low-rise buildings, including some wooden ones. 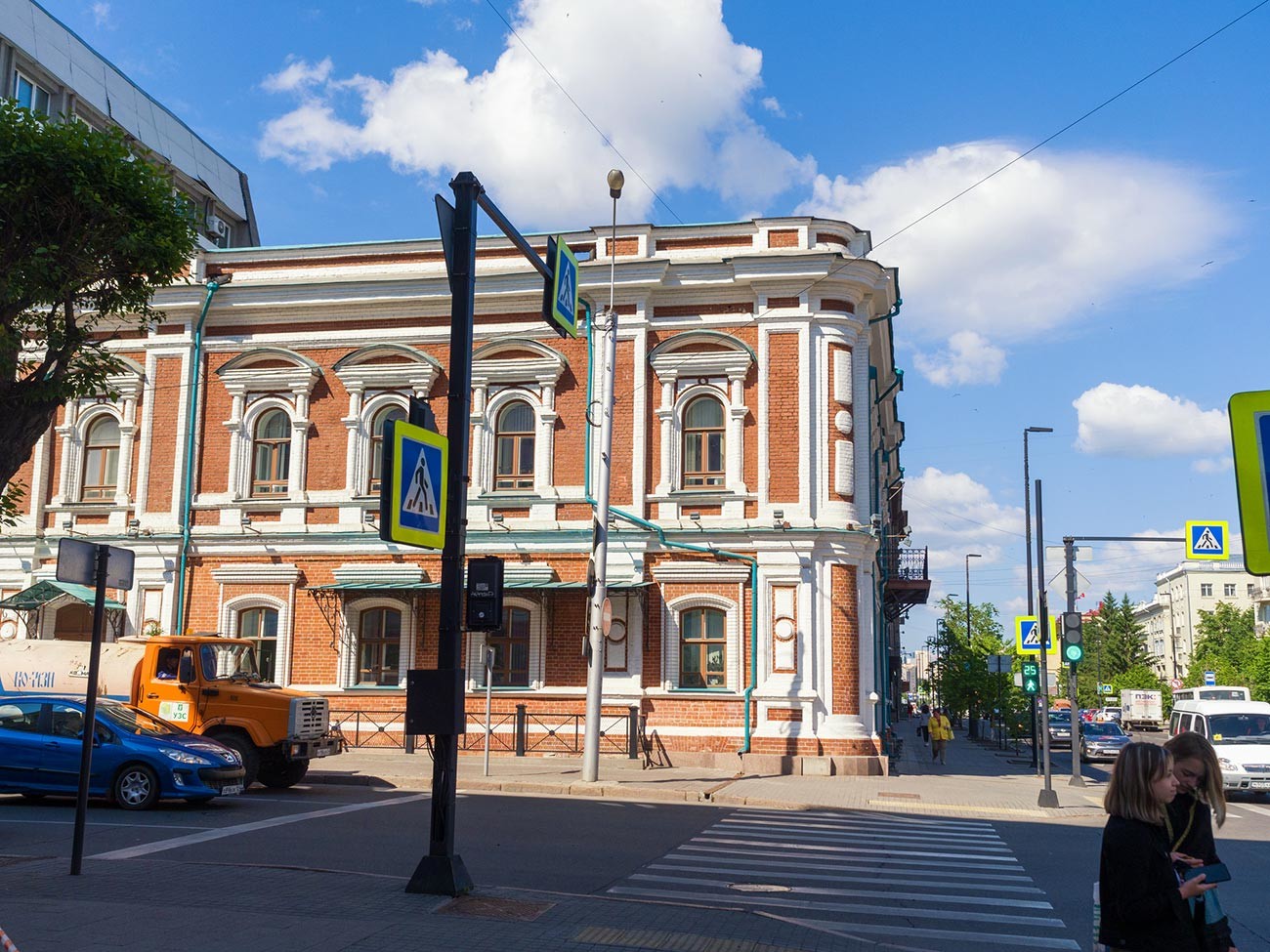 Walking to the end of the street, you will reach a pedestrian cable bridge across the Yenisei, which leads to Tatyshev Island. Make sure to visit one of the symbols of the city depicted on the 10 ruble bill, the Chapel of Paraskeva Pyatnitsa.

After walks, museums and outdoor activities, it is time to taste some of the local delicacies. Natalya Aleksandrova advises to try venison, fern, wild garlic, and candies made by the local Krascon factory, especially those with pine nuts. 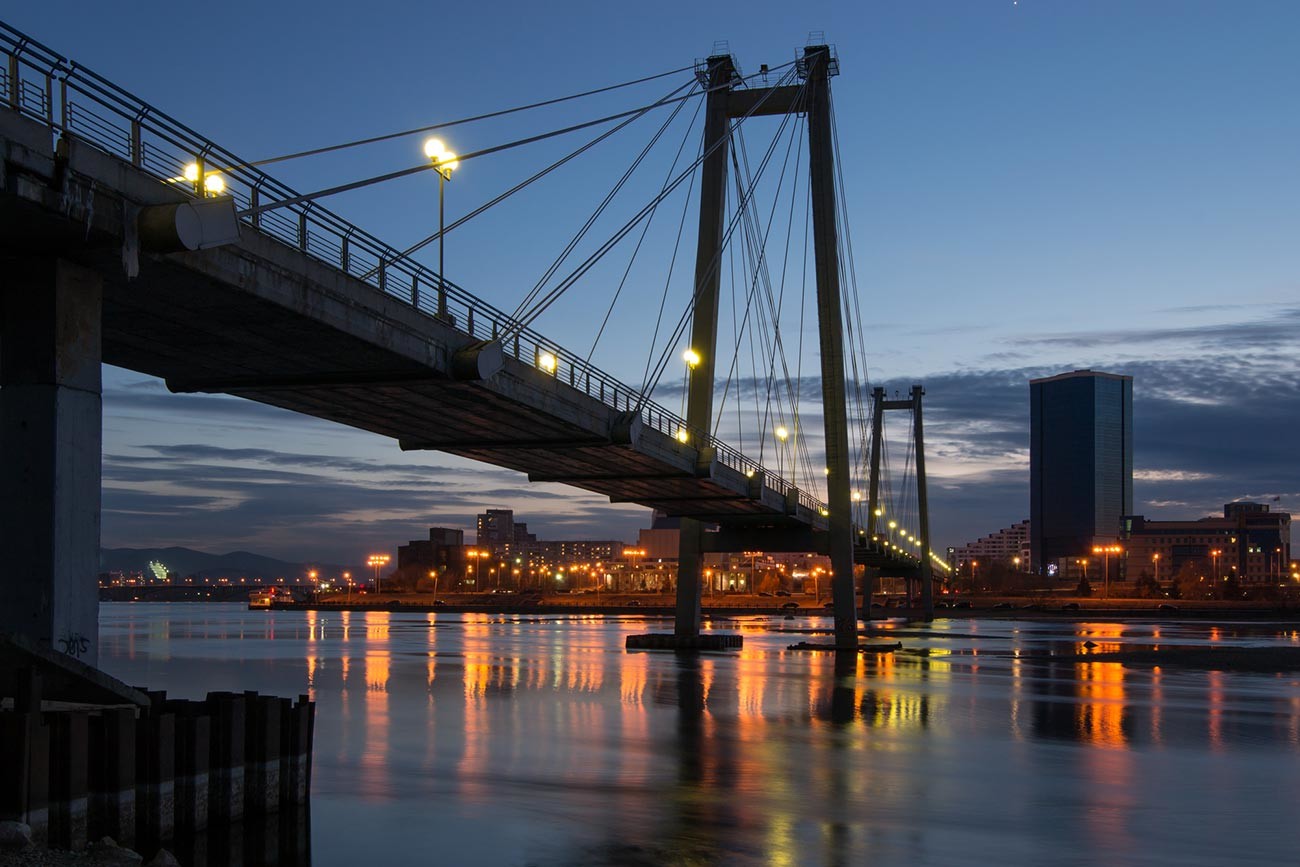 A pedestrian cable bridge across the Yenisei

“Krasnoyarsk has many good restaurants: Tunguska, Bulgakov, 0.75 Please, Gadalov, Master of Taiga. They specialize in Russian cuisine and have a lot of dishes made from local ingredients,” says Natalya.

Anna Vostokova agrees, adding that in terms of the variety and creativity of its restaurants, Krasnoyarsk is quite comparable with St. Petersburg, which is considered the gastronomic capital of Russia. “If you fancy an octopus burger, that will not be a problem,” says Anna.

Things to take with you from Krasnoyarsk are chocolates made by the local Krascon factory, as well as local honey, pine nuts and jam made from Siberian berries and cones. Natalya also recommends getting northern fish (and caviar) of the whitefish variety, as well as items made of birch bark and wood (you can find them, for example, in the Diana art salon). 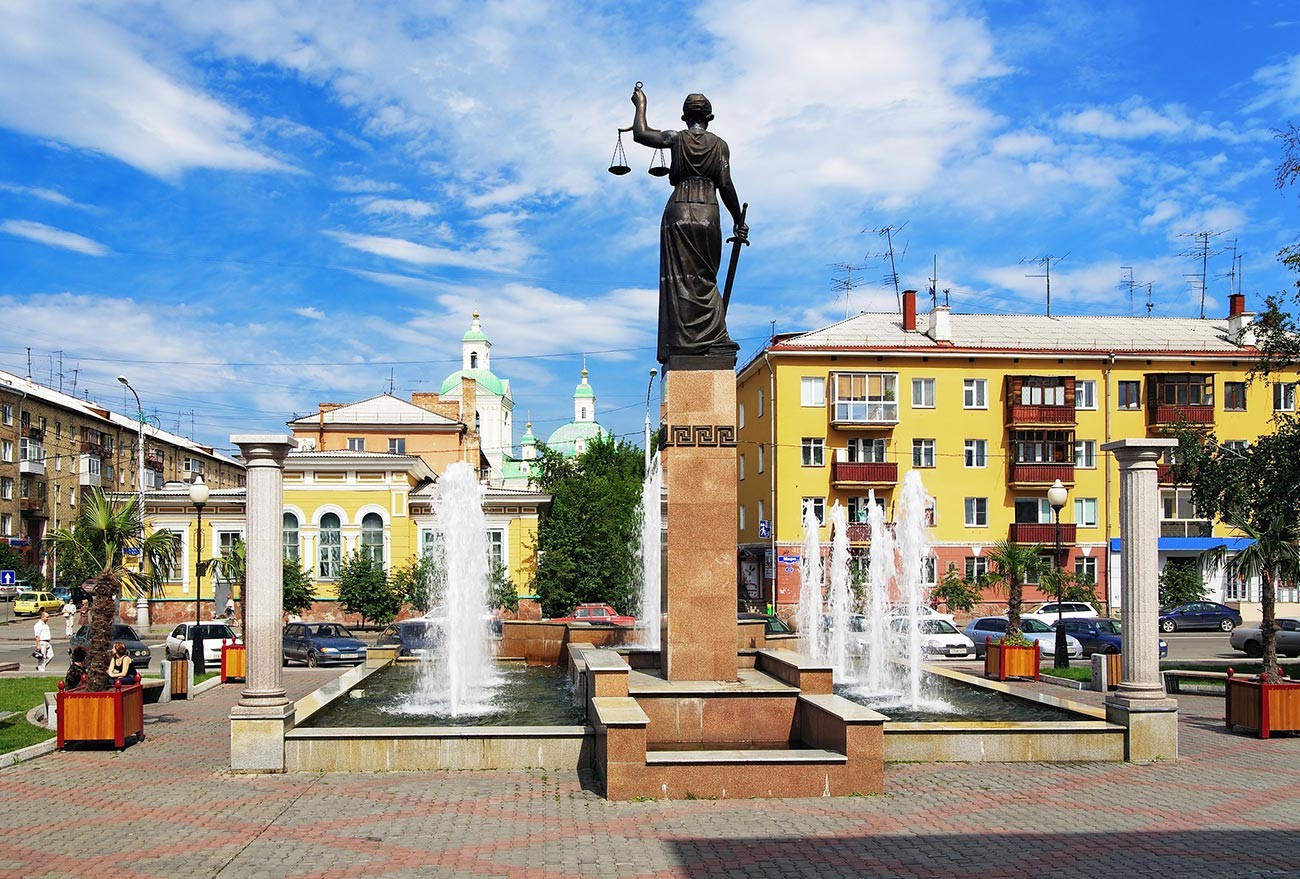 If you are interested in fashion, says Anna, you may want to check out some of the local brands (TRAMP, Matreshka Siberia, Fine Point, BÁRBARA, Nika Burda, Anita Leskova), while those who collect souvenirs should pay attention to the handicrafts of the indigenous peoples made of fur and leather.