5 facts about a rare steppe antelope called the saiga 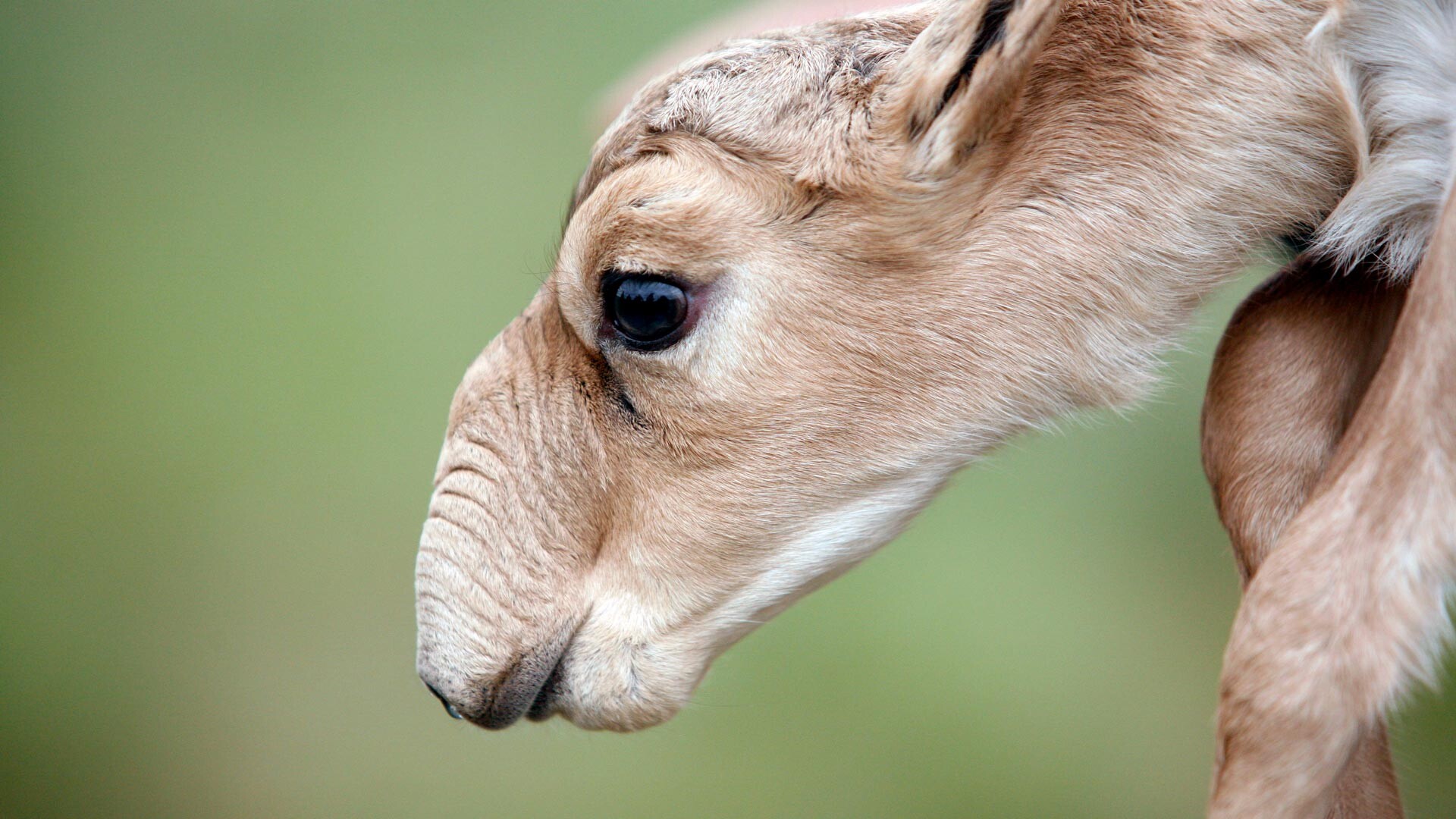 Valery Matytsin/TASS
These unusual animals have an enormous hump on their nose and have lived on our planet for so long that they even saw mammoths. But the sad fact is that there are very few of them left in the wild—and the main reason is people hunting them for their horns.

Kalmyk people living in Russia have a legend about a White Elder, "the master of the earth,” who protects all that is living. He is often depicted with his faithful companion, a small saiga, who is his favorite animal. Saiga antelopes have a rather unusual appearance. They are small even-toed ungulates with a nose that looks like a hump, and the males of the species also have a pair of horns. 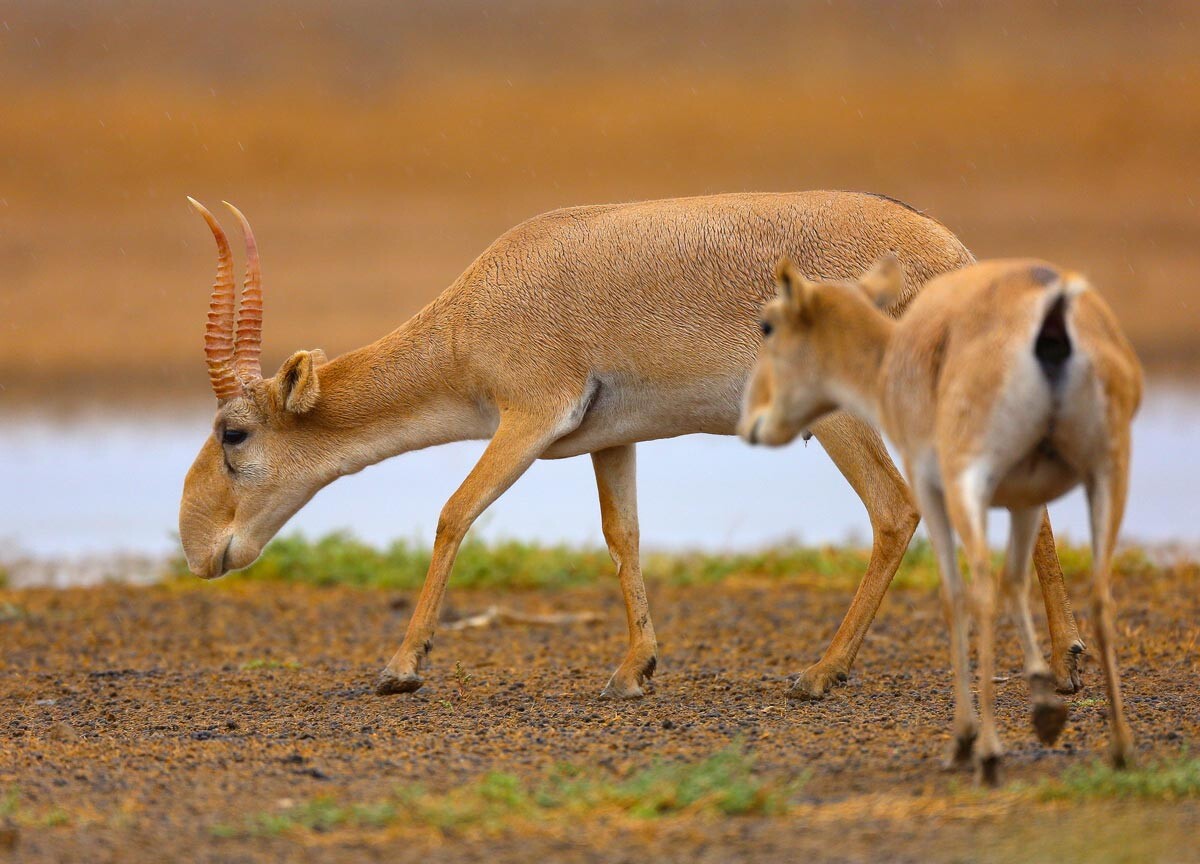 There are not many animal species left on our planet that existed at the same time as mammoths. Most of these species are rather large animals, such as musk oxen, bison and reindeer. But among them is also the saiga, a fast and timid antelope that weighs less than 40 kilograms and feeds on the tops of succulent plants. It is also called the steppe antelope because it lives only in the steppes.

Attempts to domesticate the saiga have failed miserably—unlike deer or bison, they need to be out in the open and constantly on the move.

Just 200 years ago, the saiga could be seen in the steppe regions from the Carpathian Mountains from in western Ukraine to China, but when people began to actively populate those areas, the saiga had to move out and make room for humans.

Today, saigas live not only in Russia (in Kalmykia and Astrakhan Region), but also on the territory of some former Soviet republics, where there are steppes. The biggest population (800,000) can be found in Kazakhstan, followed by Russia (14,000), Mongolia (about 10,000) and Ukraine (officially 5,000, but the number is thought to be much lower).

(Saigas come to drink some water next to a steppe cat. For their ancestors, instead of a steppe cat that could be a Caspian tiger, which lived in these parts until the 1950s.) 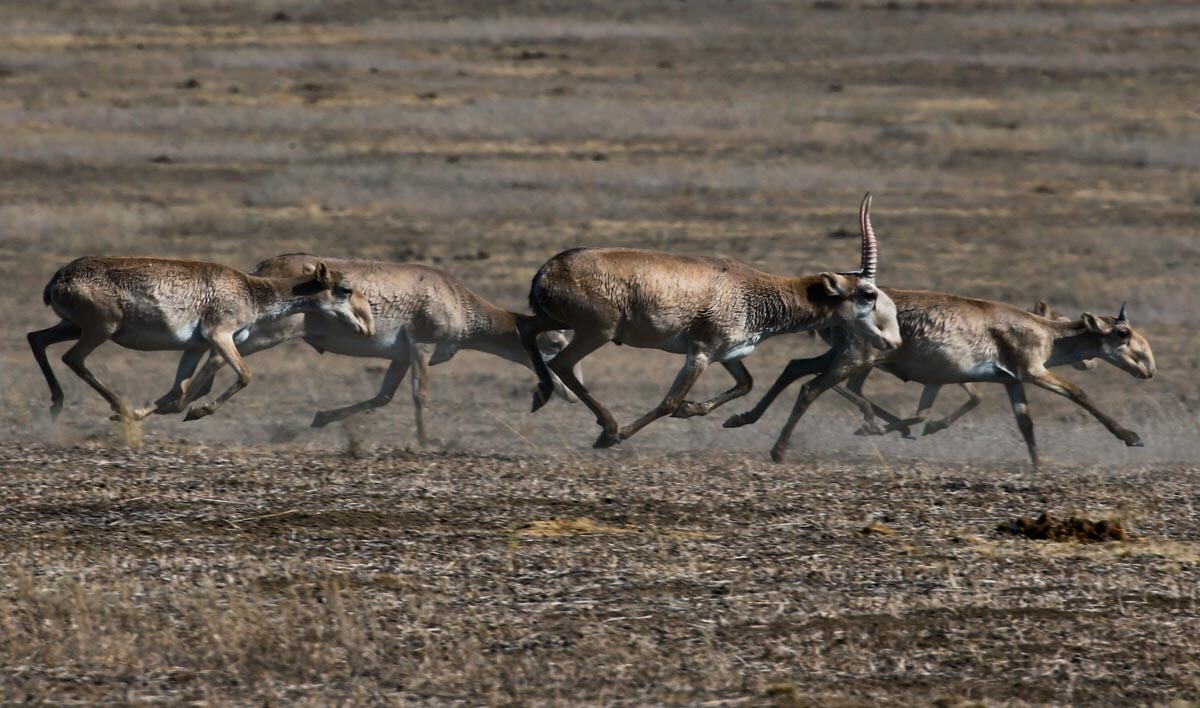 The saiga population decreased largely because of people hunting them for their horns. In traditional Chinese medicine, it is believed that saiga horns can help treat a variety of ailments, from headaches to seizures. It is therefore not surprising that they fetch high prices in China.

Efforts to combat saiga poaching date back to Soviet times and continue today. In the 1920s, the saiga nearly went extinct, but in the 1950s Soviet scientists restored the saiga population, which numbered more than a million in the USSR. Then hunting for the steppe antelope began again, and the countries where this species was present took them under state protection.

In order to preserve this species in Russia, the Black Earth Nature Reserve was set up in Kalmykia in 1990. These days, it is the main saiga habitat in the country.

“We are fighting poachers together with the law-enforcement agencies,” says Tatyana Kotorova, the nature reserve’s deputy director. “The saiga is listed in the Red Book, so poachers face a real prison term (from two to eight years and a fine of about 27,000 dollars).”

However, a new problem has emerged. Many local farmers use electric fences to prevent their sheep from leaving their pastures. Saigas are incredibly fast and can run at speeds of up to 80 kilometers per hour, and if there is an electric fence in their way they are not always able to notice it in time, leading to sad consequences.

“We are negotiating with the farmers so that they do not put up electric fences. This is wild nature and saigas should be able to run wherever they want,” says Tatyana.

3. A nose for screaming 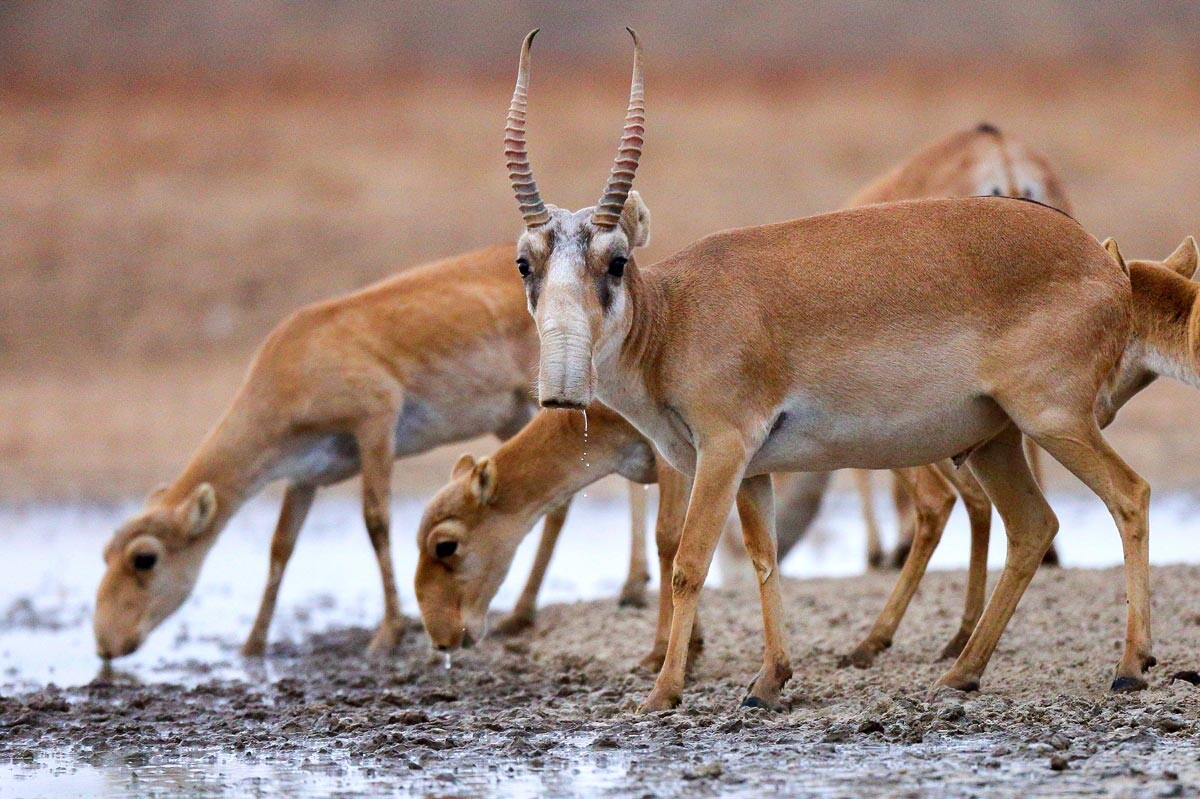 Saigas' natural characteristics make them well-suited for living in the vast expanses of the steppes. When they run in a herd, saigas kick up a lot of dust, but their bulbous noses allow them to breathe freely even when the air is filled with dust. The secret is that their noses are lined with hair inside, which filters the air.

In addition, saigas use their trunks to produce loud sounds almost like elephants. This is especially noticeable during the rut, when a male saiga can stretch its nose to lower the sound it produces. The general rule in nature is the lower the sound, the larger the animal, and a saiga wants to show to its rival that it is bigger and scarier. Saigas are actually very timid most of the time, but on the other hand what won’t you do for the sake of your bride? Furthermore, they must go to all this trouble more than once since male saigas have harems.

4. They sacrifice themselves for the sake of future generations 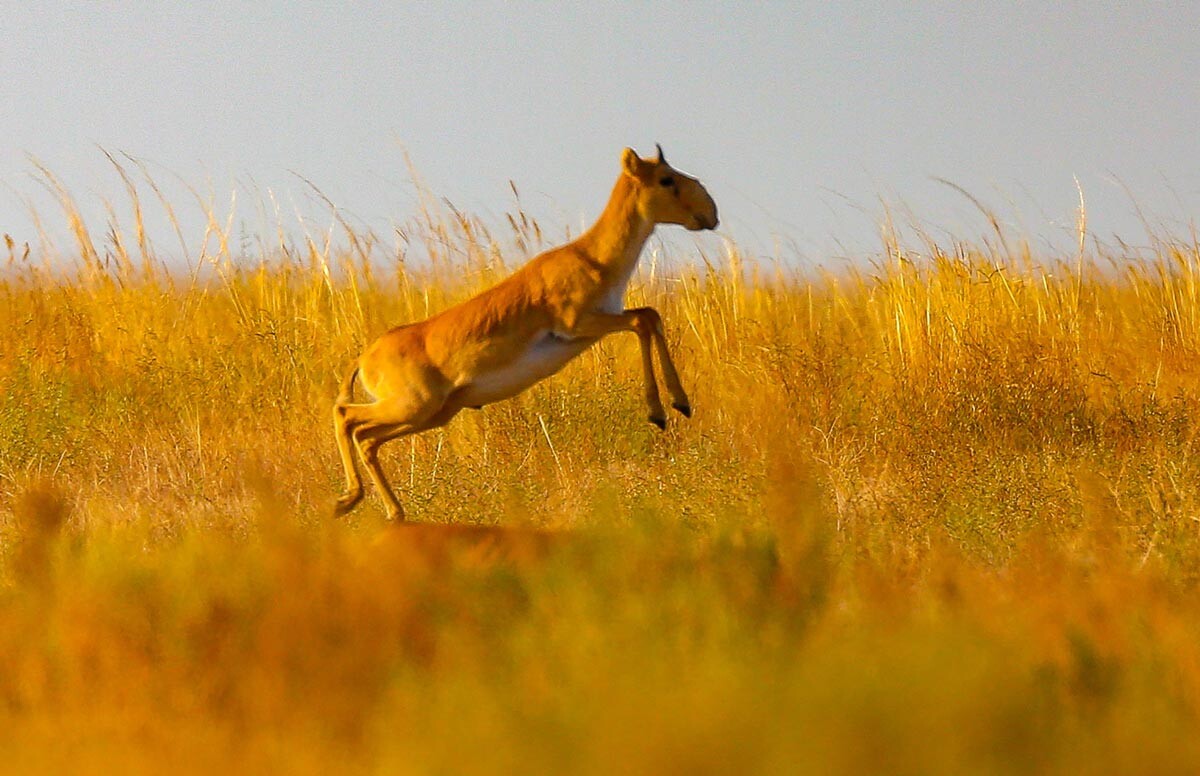 Saigas mate in November-December. Although there are more female saigas around, males still fight each other for them. If the sound competition is not enough to solve any conflicts, the males can then lock horns in a fight and the winner gets the whole harem. In the past, one male had around 15-20 females but due to poaching the number of males has decreased and now the ratio is around 30 females to each male.

During mating season, some males are so busy that they don’t even have time to eat, causing them to grow weak. This is dangerous because it makes them easy prey for steppe wolves—their only enemy in the wild.

“It is as if he sacrifices himself in exchange for the wolves not touching pregnant females, so that new generations survive,” says Tatyana.

5. They try to avoid people 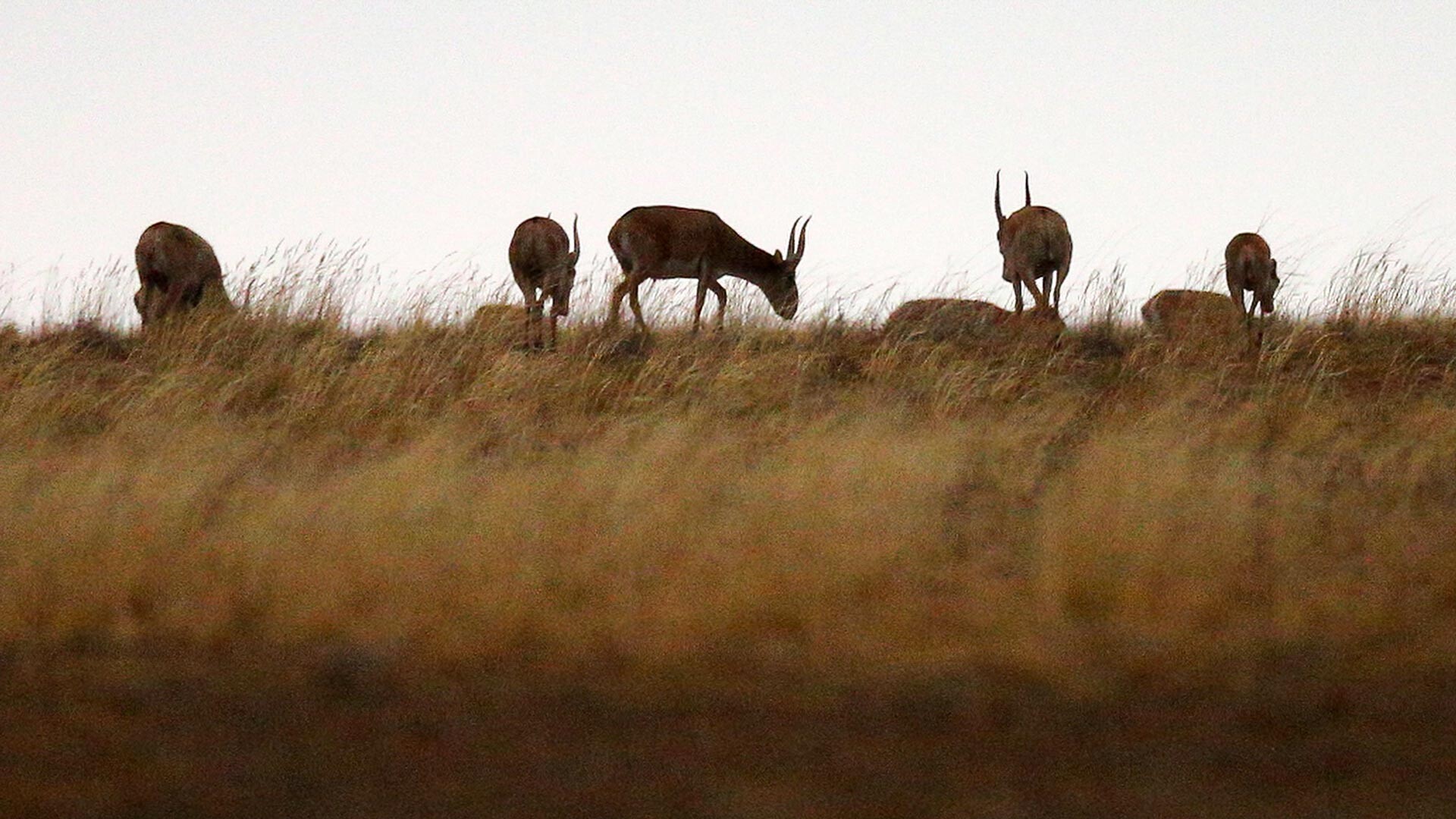 Saigas are shy animals. They are afraid of people and keep their distance. That is why in the Black Earth Nature Reserve, they can be observed only from a special shelter.

“To see the saigas, we recommend coming when the weather is hot, when they all go out to drink and you can watch them literally at arm's length,” says Tatyana.

In winter, saigas camouflage themselves. Their coats change colors from black to white, making them much harder to see in the snow. They are also seen much less often in herds.