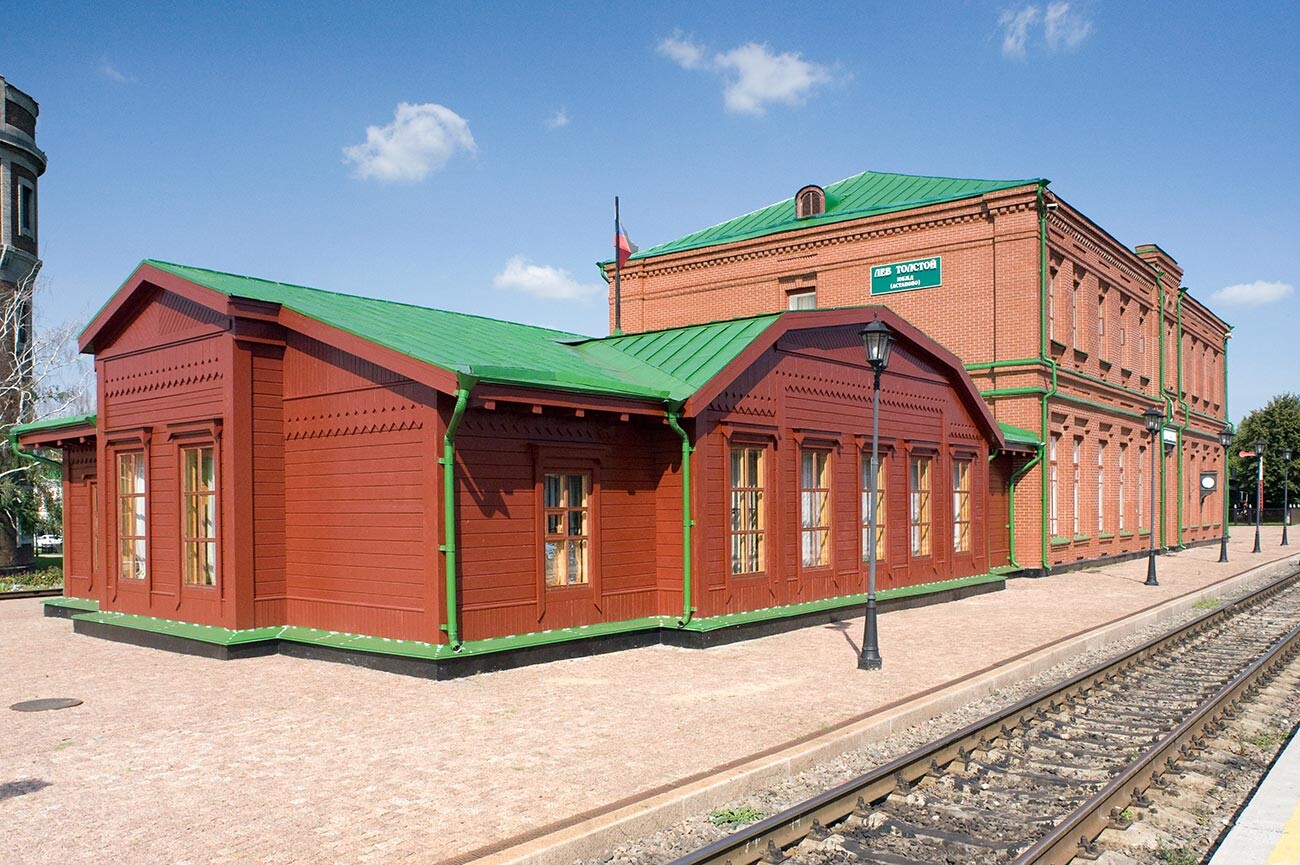 In May 1908, Russian chemist and photographer Sergey Prokudin-Gorsky took one of his most famous photographs: a color portrait of Leo Tolstoy at his Yasnaya Polyana estate.

It is one of several photographs Prokudin-Gorsky took in anticipation of the great writer’s 80th birthday. 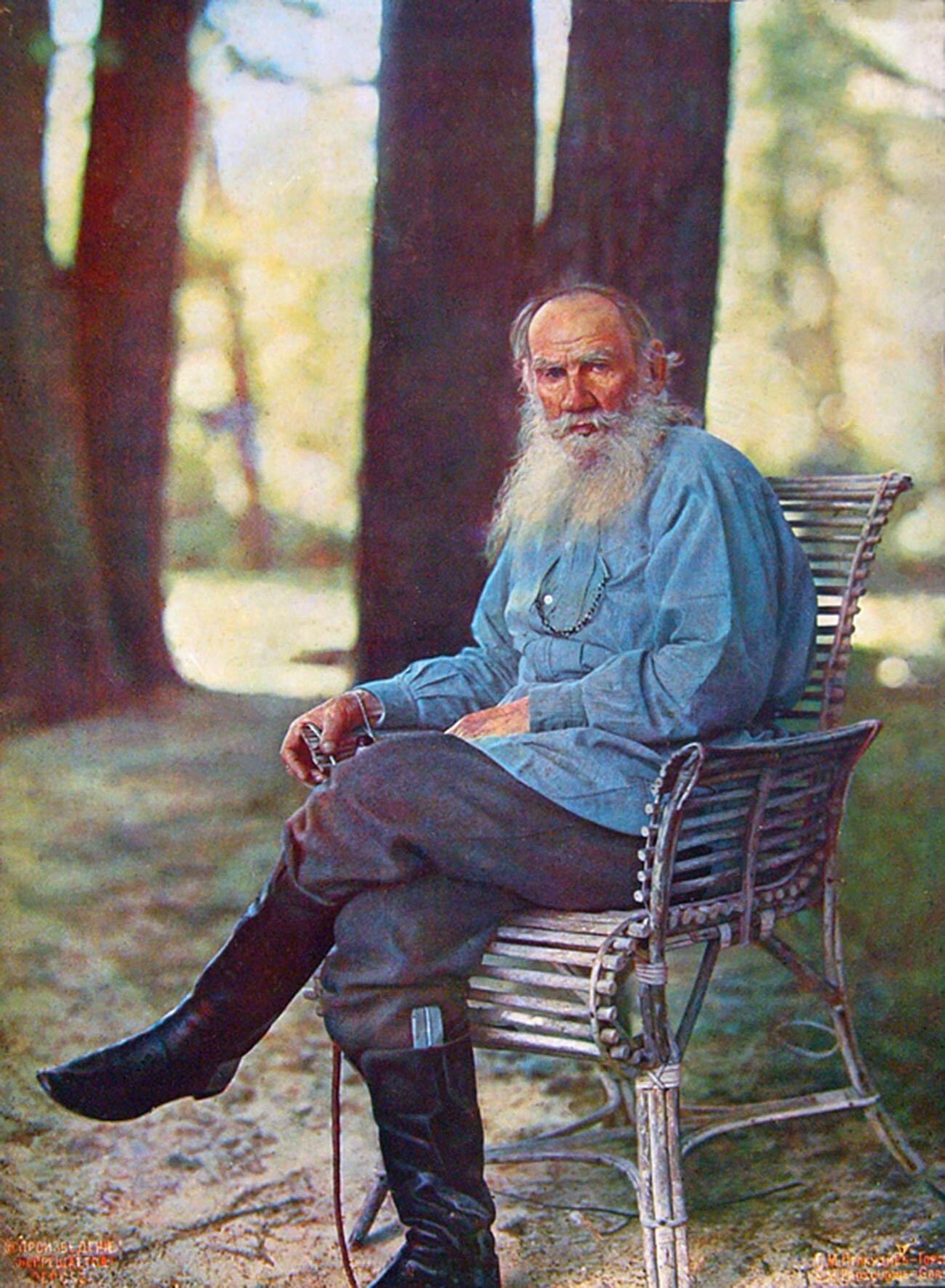 Yasnaya Polyana. Color portrait of Leo Tolstoy taken after his return from horseback riding. First published in August issue of Notes of the Imperial Russian Technical Society. May 23, 1908

My photographic record of Yasnaya Polyana began in July 1970 and continued over the next few decades. The first photographs I took there were among the earliest of my work in Russia.For Prokudin-Gorsky, as for so many other Russians, Tolstoy served as a beacon of justice at a time of immense challenges for the Russian Empire. Yasnaya Polyana, located just to the southwest of the city of Tula (115 miles from Moscow), became a pilgrimage site for Russians of all classes and for foreign visitors. 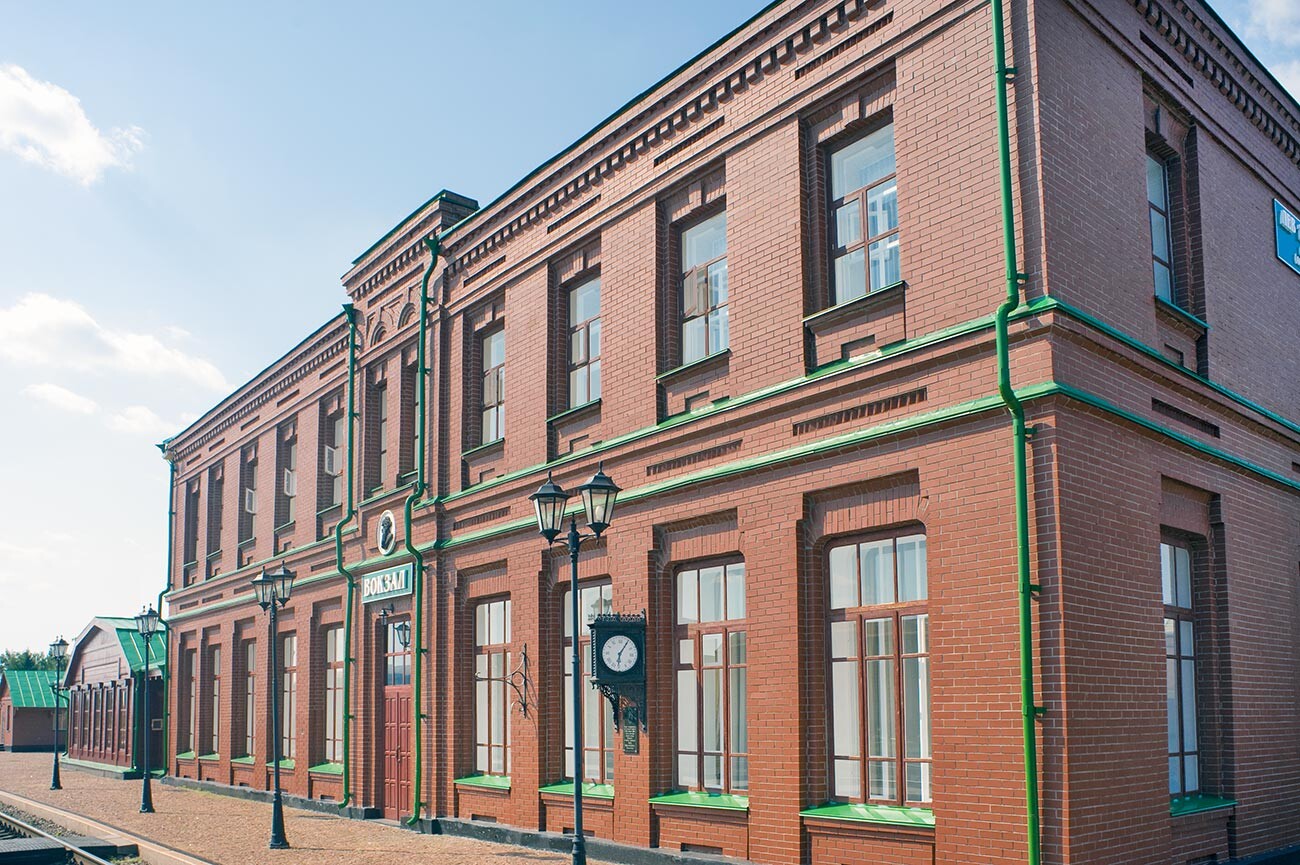 But while his work brought joy and insight to the lives of millions of readers throughout the world, his final years were a time of personal turmoil and alienation, particularly from his devoted wife Sofya (Sonya) Andreevna).

In the fall of 1910, fleeing what he considered to be an intolerable domestic situation, Tolstoy met death not at his home, but at a distant railway station known as Astapovo, some 250 miles southeast of Moscow in what is now Lipetsk Region. 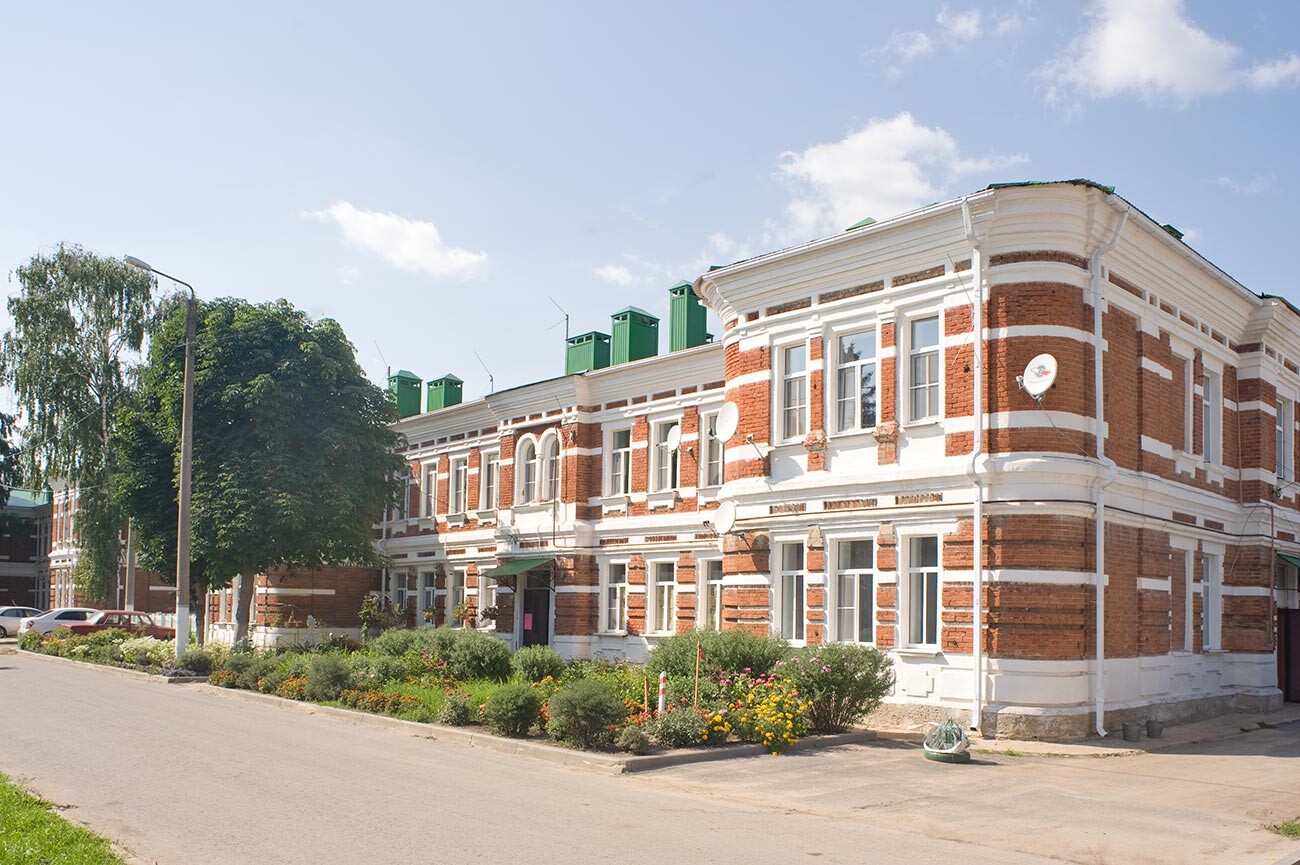 Much has been written about the final days of the writer's life, but little attention has been given to the physical setting in which this momentous event occurred – the railroad station known as Astapovo. I was fortunate to be able to photograph the station, which is now a national museum, in August 2013. 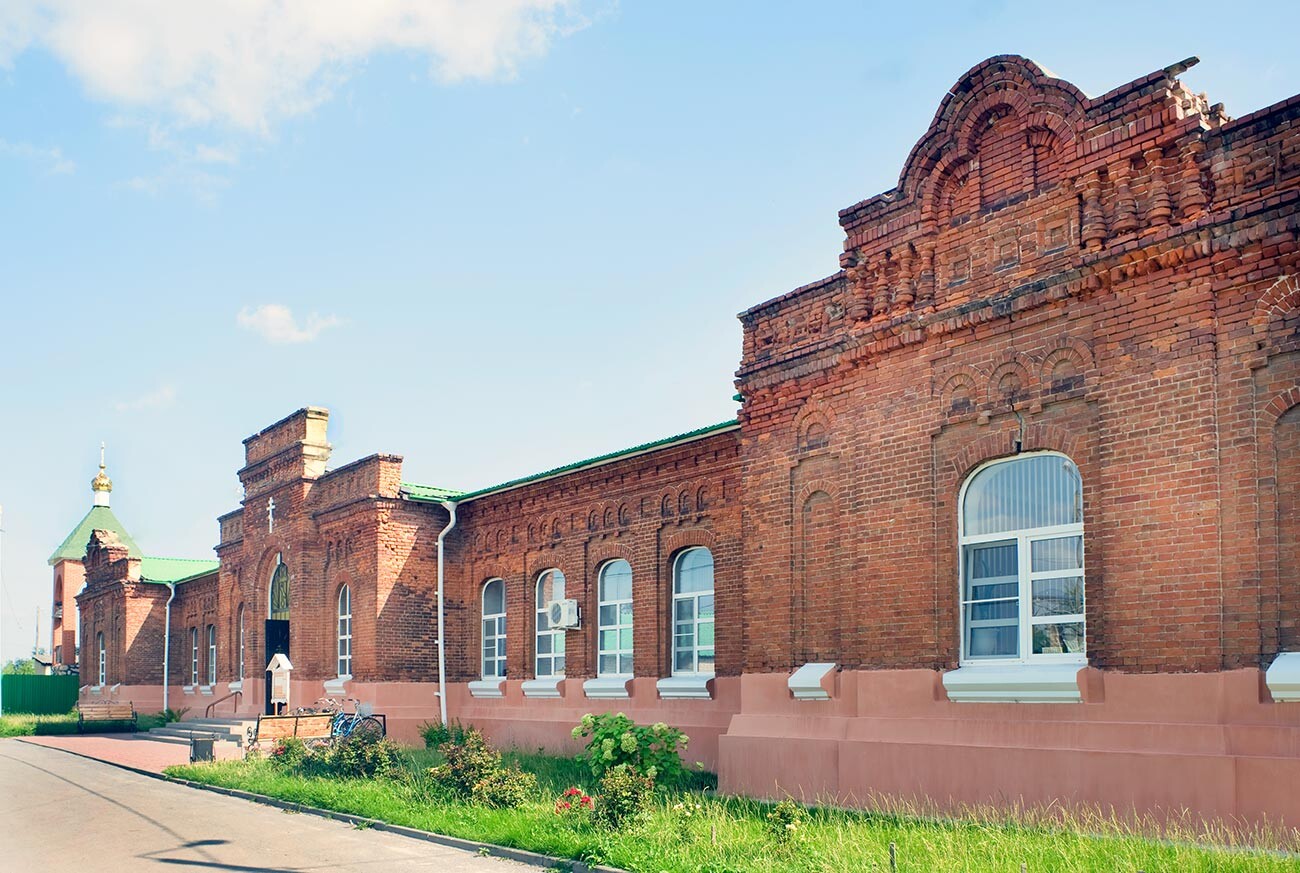 The station’s name comes from the nearby village of Astapovo, known to have existed since the mid-17th century. The place name was derived from Lake Ostapovo, which in turn was related to the personal name "Ostap," pronounced "Astap" in standard Russian.

Astapovo had little to distinguish it from hundreds of other such villages in south-central Russia. But this rural backwater was transformed in 1889-90 with the building of Astapovo Station as part of the new Ryazan-Kozelsk Railway. By the late 1890s, traffic through the station increased significantly with the development of what had become the Ryazan-Urals Railroad system. The station complex underwent a major expansion beginning in 1898 and continuing through the next decade. 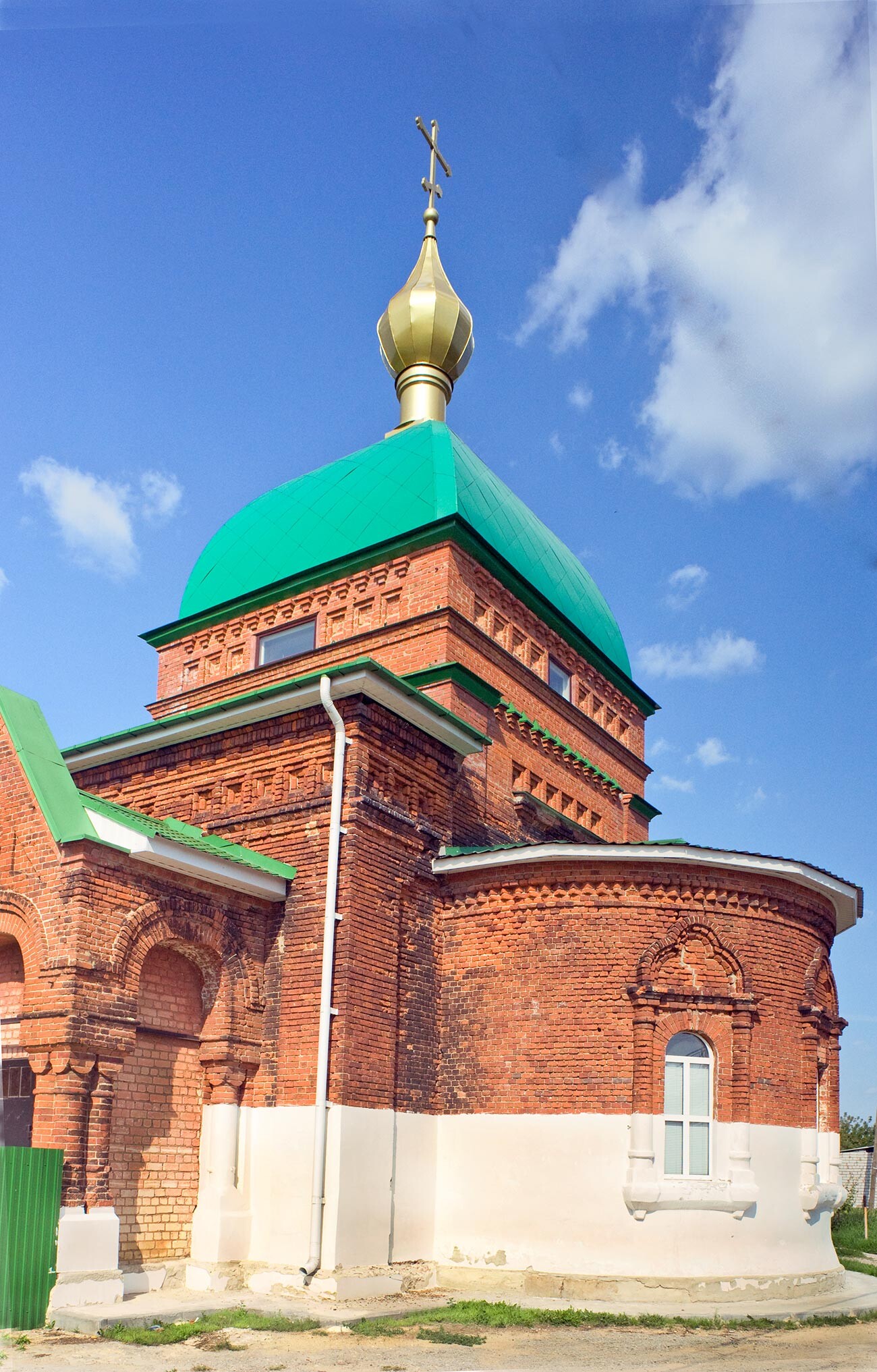 By 1910, Astapovo was hardly the tiny station mentioned in some Tolstoy biographies. On the contrary, it could be seen as a model for provincial stations within Russia's rapidly growing rail system.

The Astapovo complex consisted of several buildings, including a substantial two-story brick station constructed in 1903 next to the original wooden station, which was built in 1890 and still in use. Behind the station buildings and slightly to the right are two one-story wooden structures: a house for the stationmaster and a first aid station, now used as a pharmacy. Nearby is a low brick building that housed the telegraph. 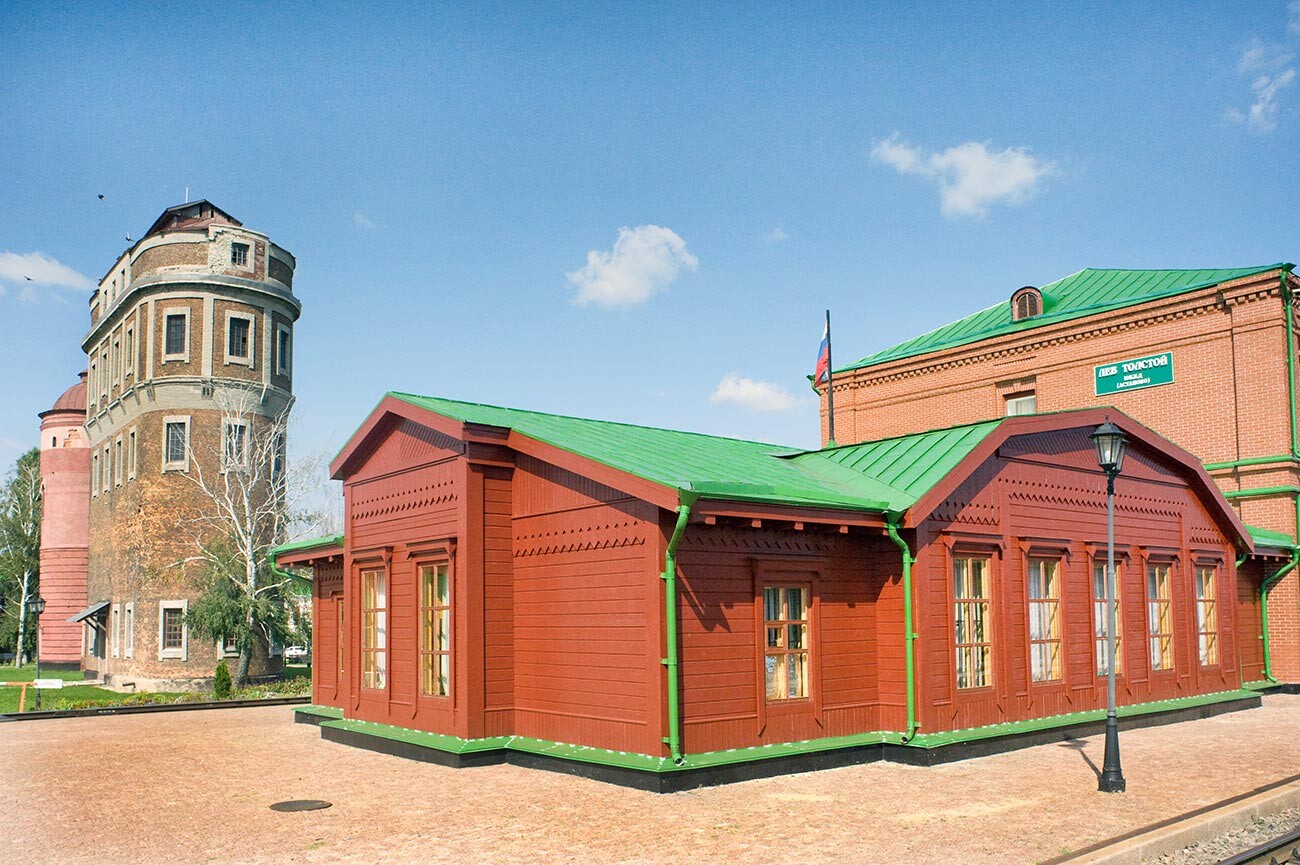 To the right of these buildings was a railway technical school connected to the Church of the Trinity, both built of brick between 1905-09. Used as a warehouse during the Soviet period, the church has since been cleaned and reconsecrated. 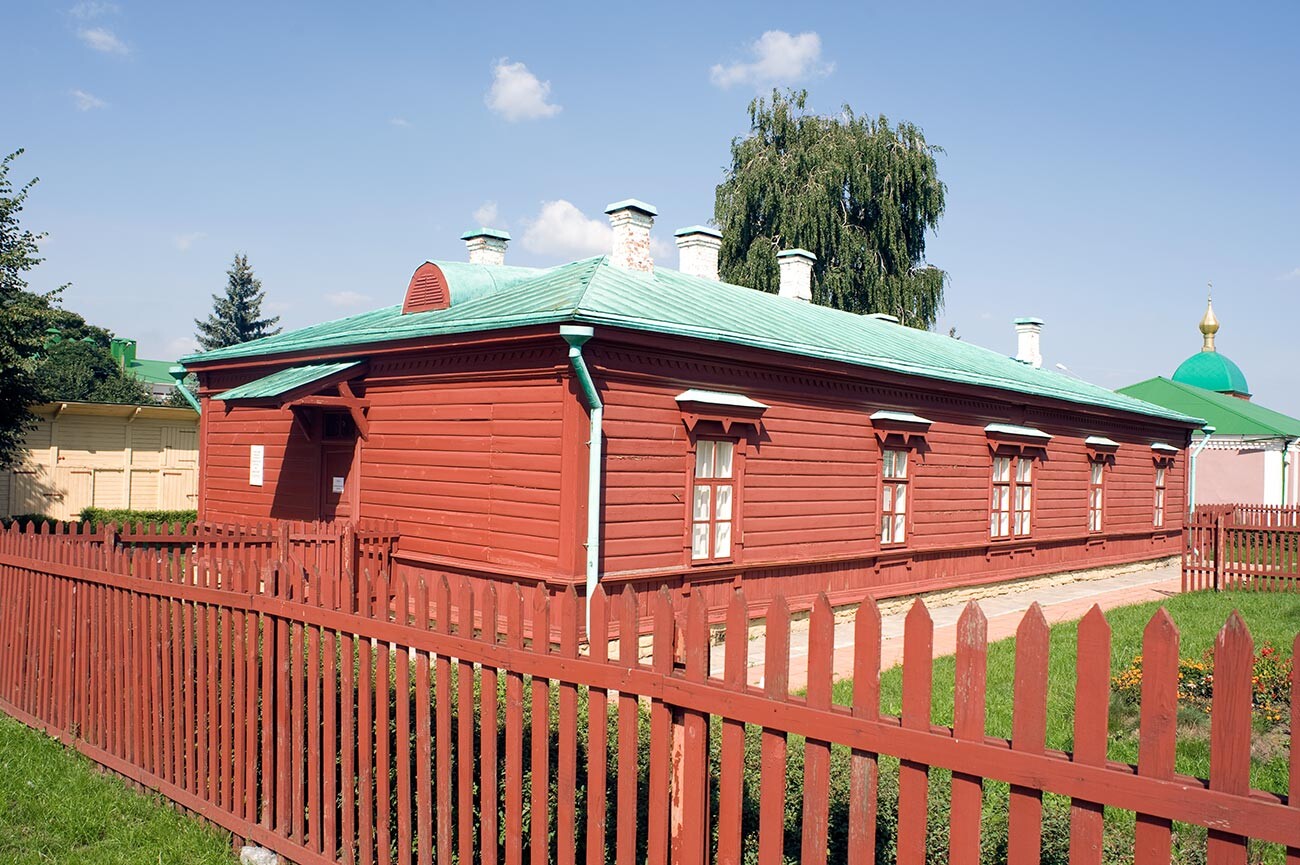 Behind the station on the left stand two brick water towers, whose size reflected the rapid expansion of Astapovo Station and the number of steam engines that passed through it. At the back of the complex across a small square is an attractively designed row of buildings for railway workers. A park with an entrance gate was laid out next to the station area. Such was Astapovo Station when Tolstoy arrived, already seriously ill, on October 31. (This date is by the Julian calendar still used in Russia until 1918; it was November 13 according to the Gregorian calendar used elsewhere in Europe.) 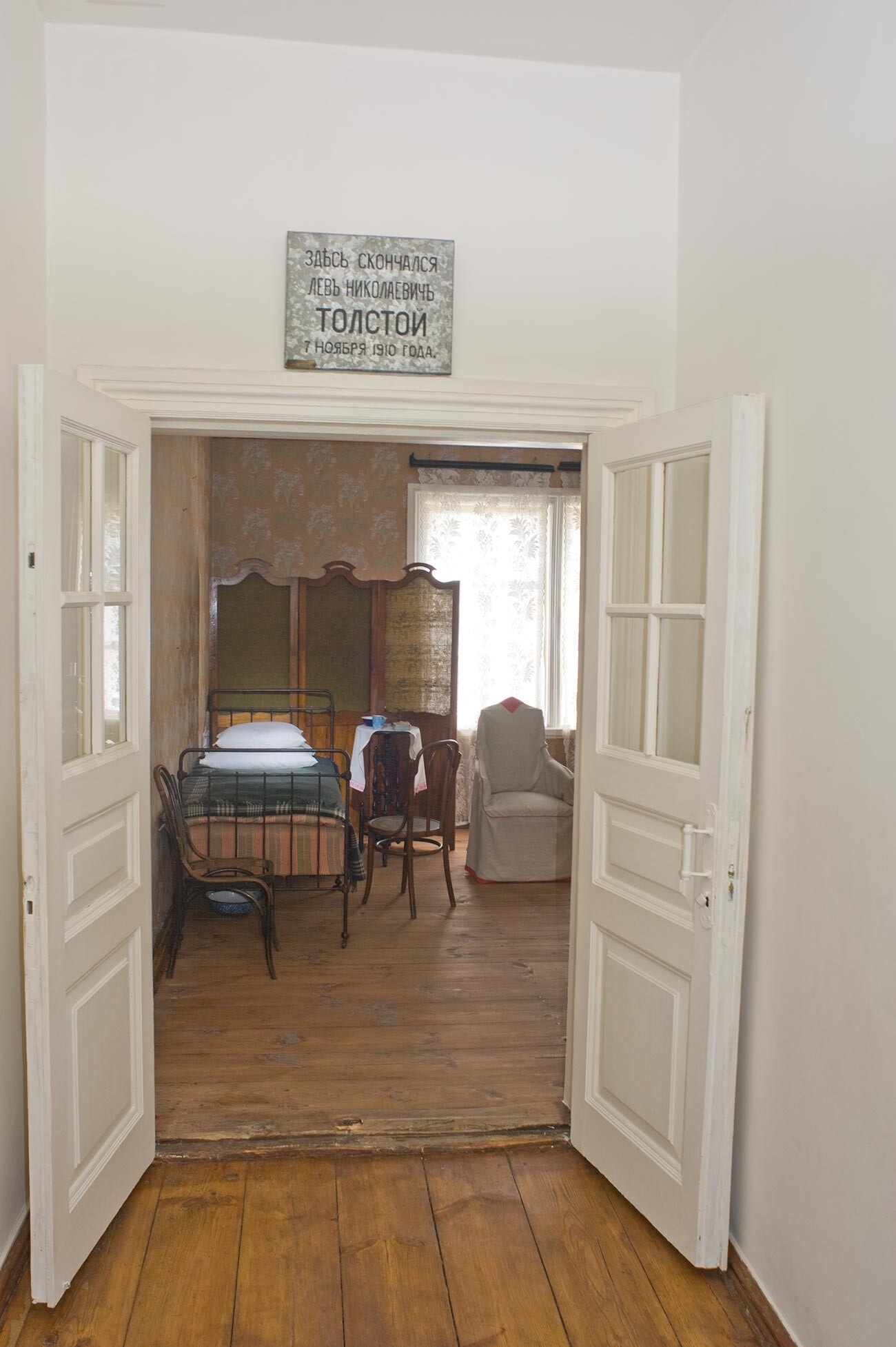 Stationmaster's house, interior. View toward room where Tolstoy stayed. Memorial sign was placed over doorway soon after his death. August 10, 2013

In his latter years, Tolstoy had become increasingly distraught by what he felt was a lack of sympathy for his social and moral views on the part of Sonya, who deeply loved him, had borne him 13 children (eight of whom lived to adulthood) and dedicated her life to his work and well-being.

This tragic antagonism was inflamed by some of Tolstoy's closest associates, who advocated a public gesture such as leaving Yasnaya Polyana. The most prominent among these associates was Vladimir Chertkov, a controversial figure who gained Tolstoy's trust and engaged in tireless organizational activity to promulgate the writer's late work and teachings. 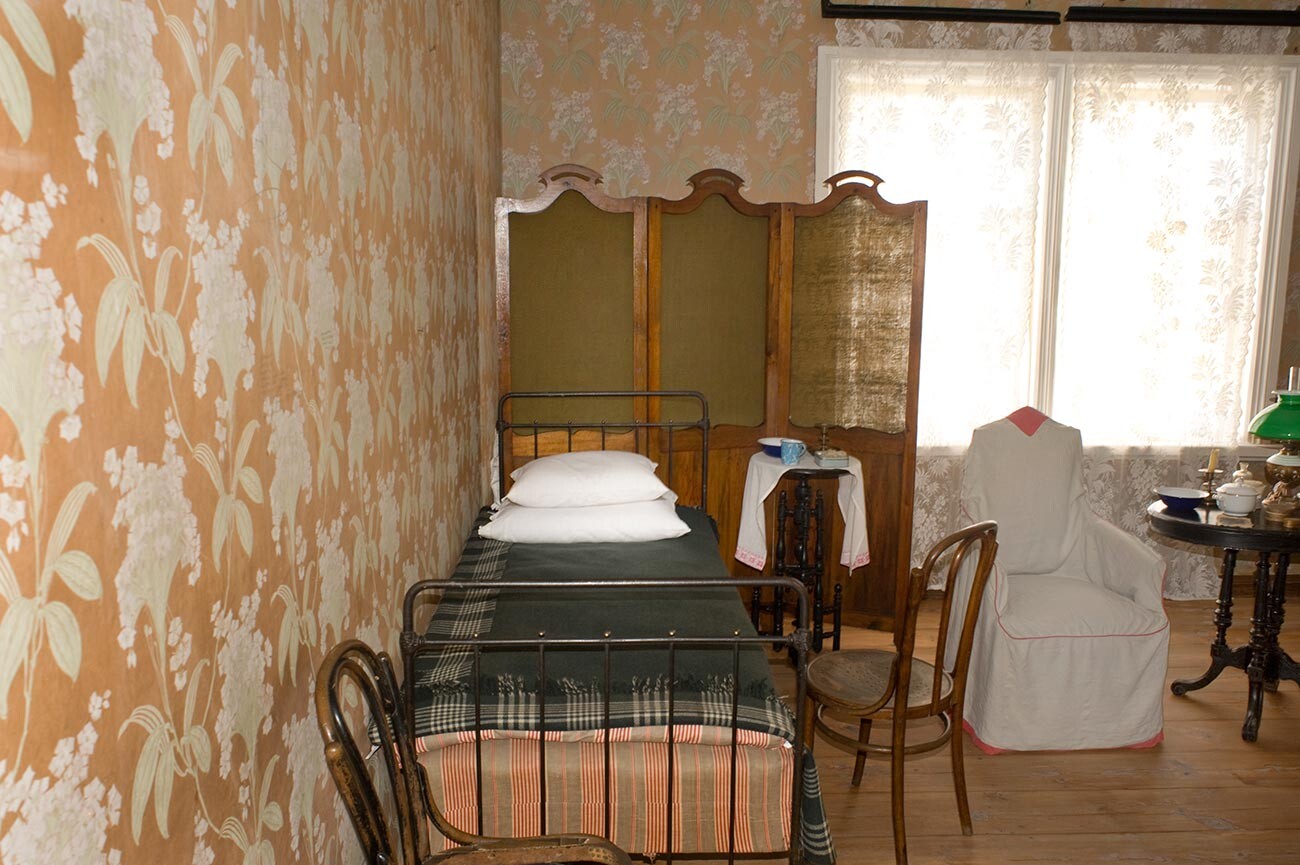 Adding to the tension was Tolstoy's very public criticism of the Orthodox Church and his rejection of certain basic tenets of the faith. In response, the Church excommunicated him in 1901. Although some have claimed that he sought a return toward the end, he died unreconciled with the church.

In the early hours of October 28, Tolstoy arose after a sleepless night, bade farewell to his daughter Alexandra (Sasha), and departed Yasnaya Polyana with his personal physician, Dushan Makovitsky. Fearing discovery, they covered a difficult path to the small station of Shchekino, where they boarded a train to Kozelsk Station in Kaluga Province. Stationmaster's house, interior. View from main entrance of room where Tolstoy lay. Right: window through which his wife Sofya looked from the outside. August 10, 2013

After sending telegrams to Sasha and to Chertkov, they journeyed the same day to the nearby Optina Pustin Presentation Monastery, a renowned spiritual center that also played an important role in Fyodor Dostoevsky's life. Indeed, between 1877 and 1890, Tolstoy met three times with Father (starets) Amvrosy, considered the prototype for Father Zosima in The Brothers Karamazov. 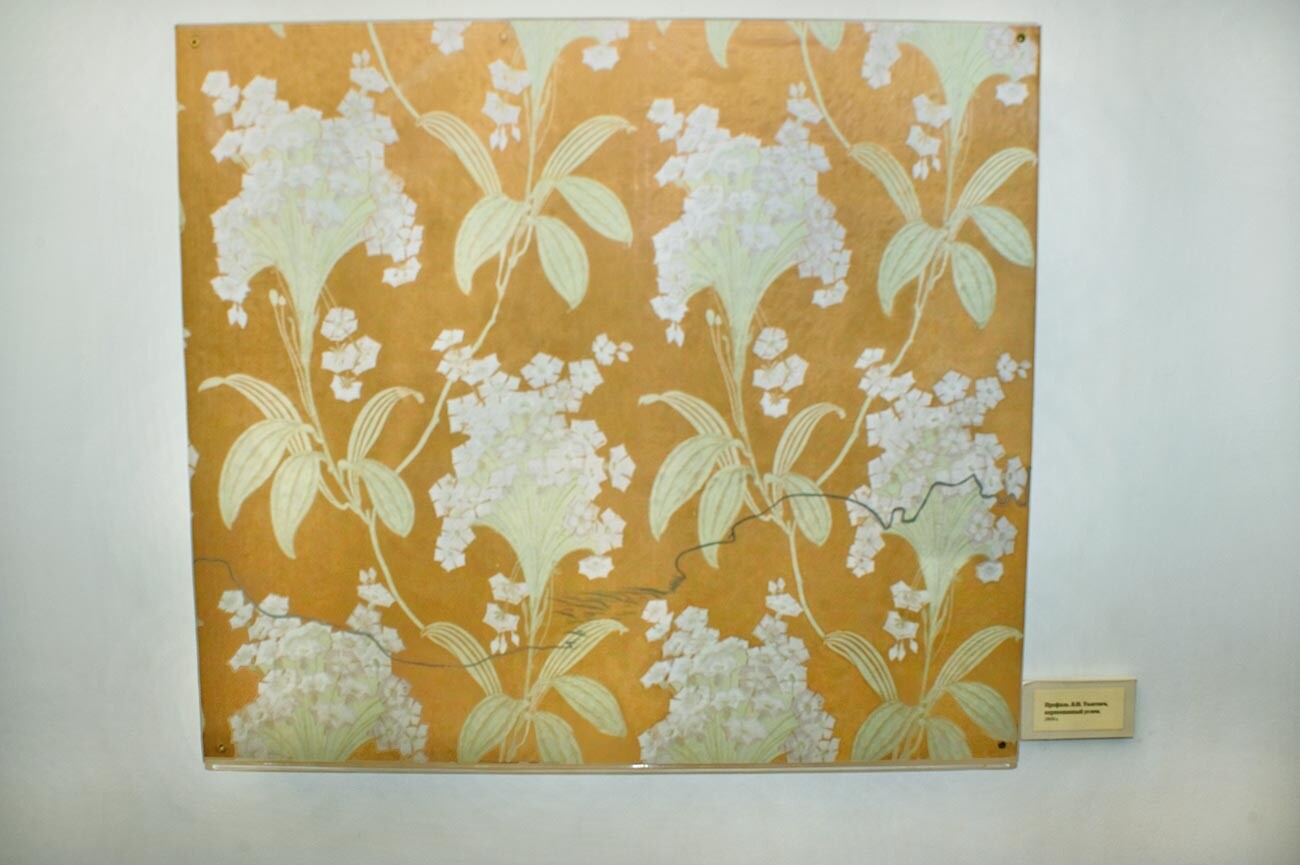 On October 28, Tolstoy twice approached the John the Baptist skete, or retreat, within the Optina Pustyn monastery where the elderly monks venerated for their wisdom resided. Each time he turned back, beset by doubt. Many have speculated on his motives for this unexpected visit, but there is little firm evidence about his possible intentions to reconcile with the Orthodox Church. 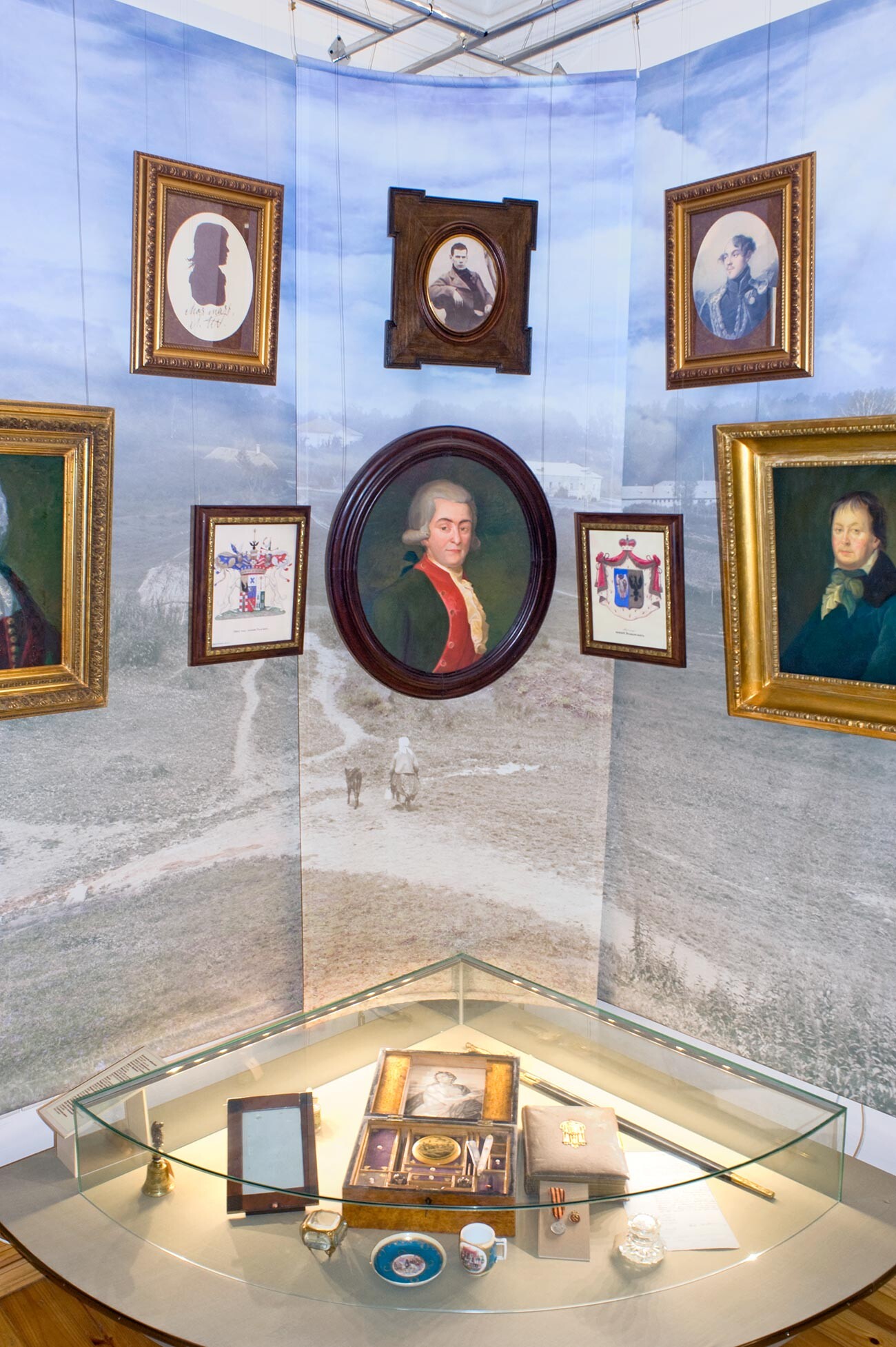 Having spent the night at the hotel adjacent to Optina Pustyn, Tolstoy and Makovitsky made their way to the Shamardino Convent, 7 miles north of Optina Pustyn, on October 29. There Tolstoy visited his sister, Maria (1830-1912), who had entered the convent in 1891. The next day, Sasha arrived with news that Sonya had learned of this whereabouts. That evening Tolstoy wrote a letter asking her not to follow him. 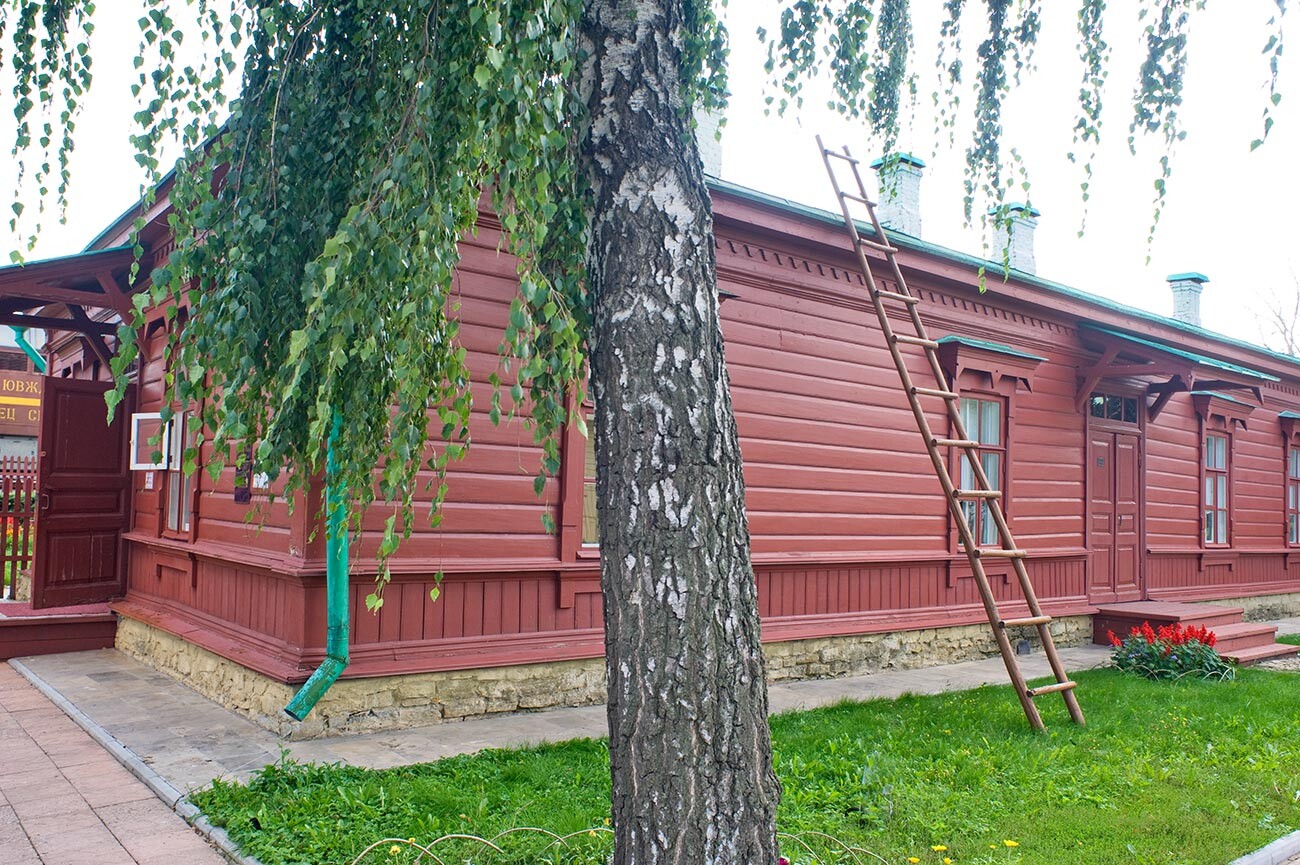 Early on the morning of October 31, Tolstoy left Shamardino with Sasha and Makovitsky for a jolting trip back to the Kozelsk station. There they boarded a third-class car in the direction of Rostov-on-Don. Already in fragile health at the age of 82, exhausted by the constant travel, and suffering in the smoke-filled, crowded, primitive car, Tolstoy became ill with pneumonia.

Toward evening, Makovitsky and Sasha, alarmed by his obvious distress and rising temperature, decided to take him from the train at the next station, Astapovo. The efficient station master, Ivan Ozolin, recognized Tolstoy and promptly dealt with the emergency by providing him with a large room in the house where he lived with his wife and their three children. 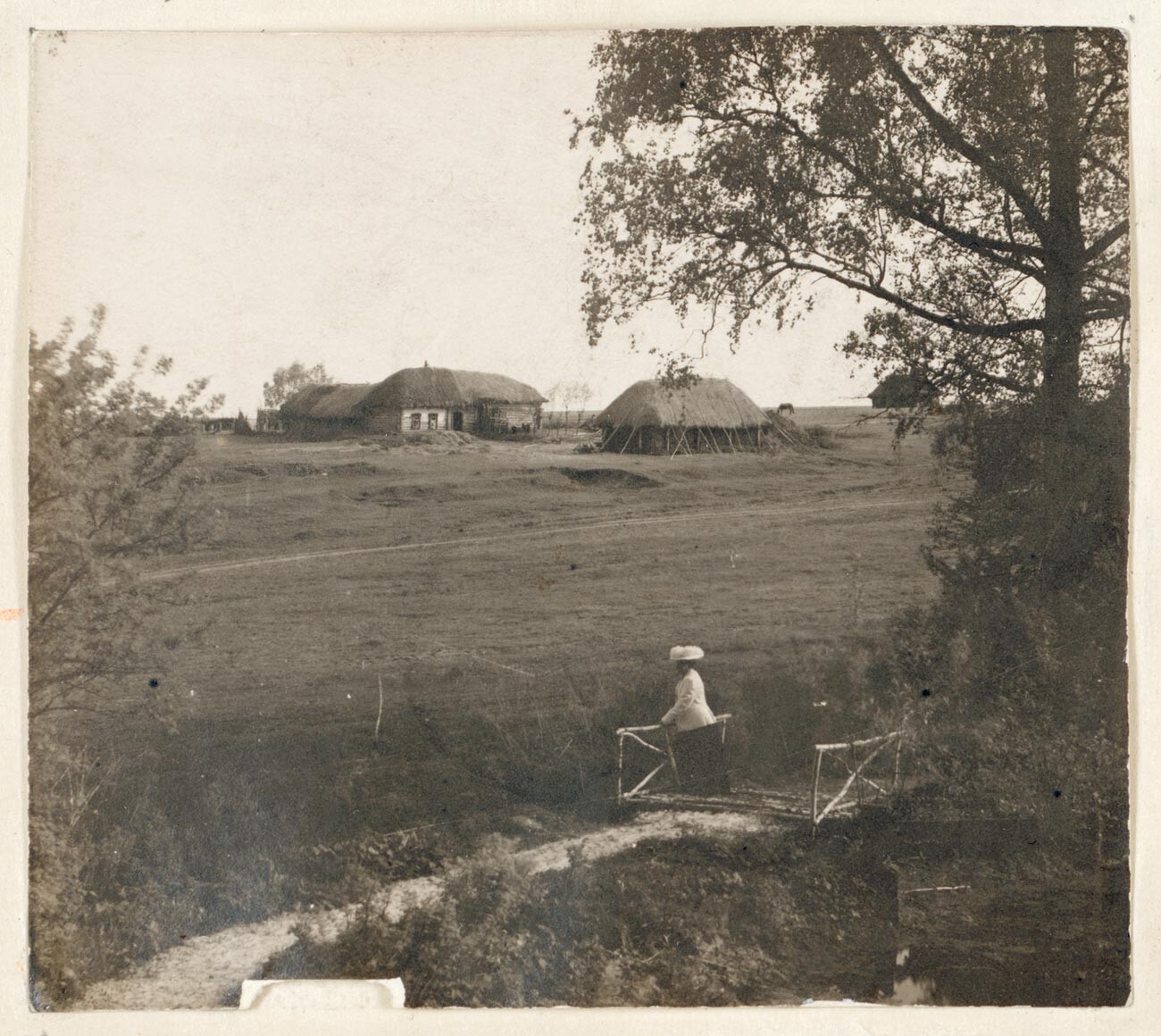 Over the next week, Astapovo became an international sensation. Telegraph bulletins went out ceaselessly, reporters flocked to the station, and a film crew from the French Pathé News Company arrived toward the end.

On November 2, Chertkov appeared at Tolstoy's request, and that evening Tolstoy's son Sergei arrived. Sofya Andreevna, accompanied by other children, arrived by the end of the day in a first-class car that remained at the station and housed them for the duration. Those closest to Tolstoy prevented her from entering the stationmaster's house.

A succesion of doctors descended on the station, but no expertise could prevent the inevitable. His wife was allowed into the room only when he had slipped into a coma. On November 7, at 6:05 AM, Tolstoy died without last rites. Ozolin, who was a Lutheran of Latvian origins, kept no icons in the house. 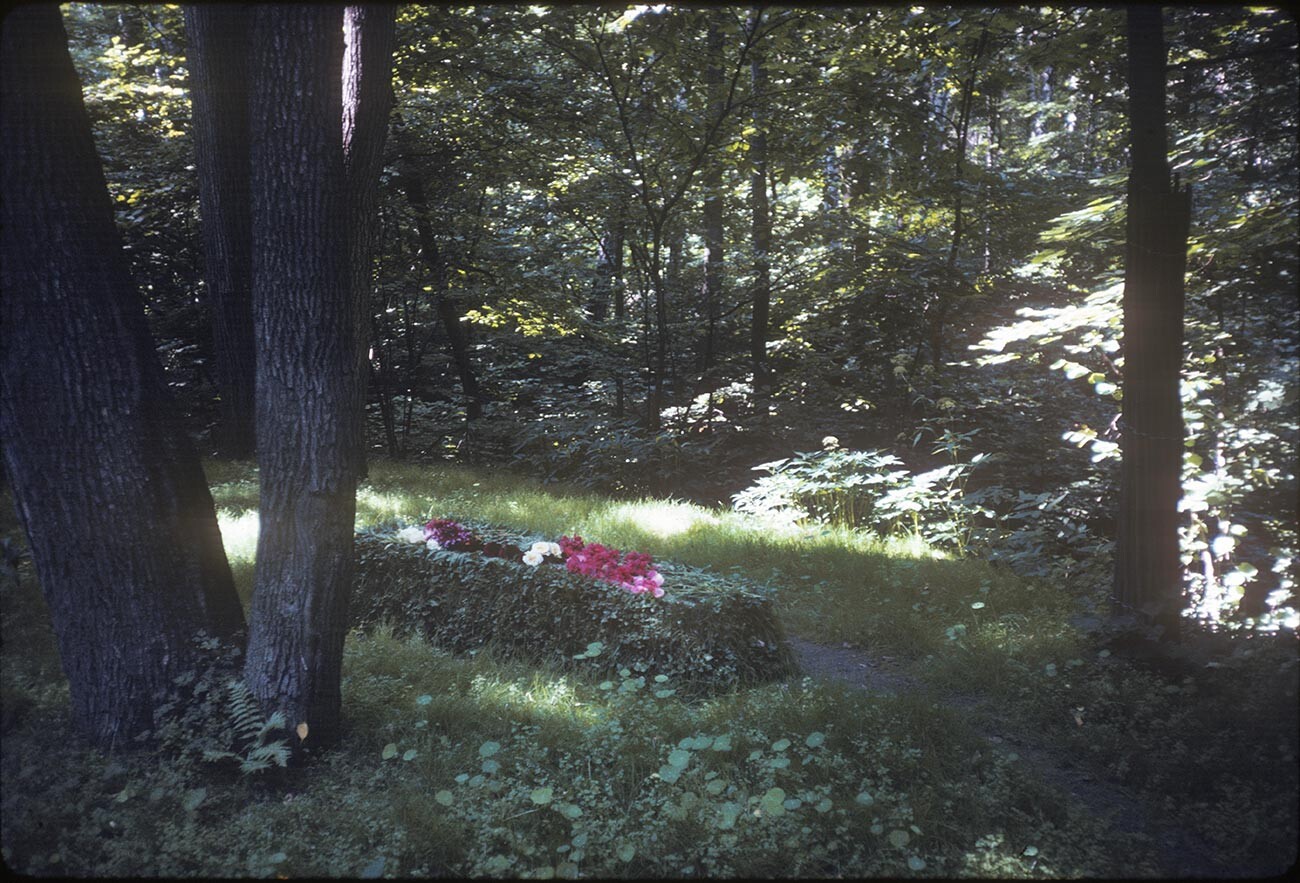 Ozolin decided to keep the bedroom as it was at the time of the great writer's death. The shadow of Tolstoy's recumbant head and torso cast by the bedside lamp was outlined on the wallpaper and has been preserved. Within a day, a memorial plaque appeared over one of the doors to the room. The station clock was stopped at 6:05.

On November 8, a funeral cortege set off from Astapovo to Yasnaya Polyana. The next day Tolstoy was buried on the estate in simple grave without a cross. Hundreds attended the burial under the watchful eyes of government agents.

Memorial to a time of change 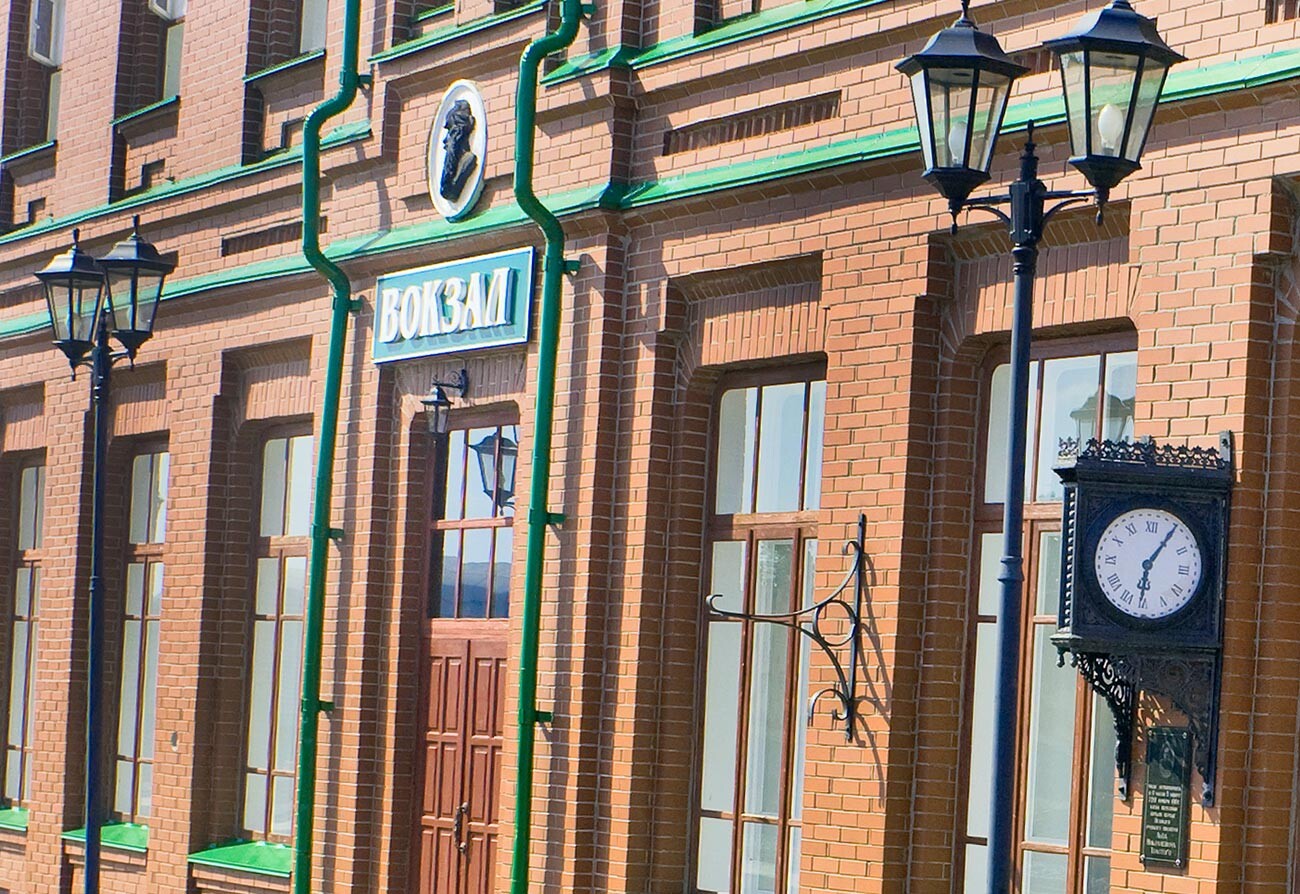 Tolstoy's life spanned two very different eras, from a serf-owning agricultural society to a turbulent period of uneven development and industrialization already evident in his novel Anna Karenina. It is somehow fitting that his final days should have unfolded along a railroad, the symbol and instrument of rapid social change that he profoundly observed – and viewed with suspicion.

In 1918 Astapovo Station town was renamed "Lev Tolstoy," although the name "Astapovo" remains for the museum complex, as well as for the nearby village. The shrine established by the good stationmaster Ozolin was maintained after the revolution and is now a national landmark, administered by the Tolstoy Museum in Moscow.

As for the town now called “Lev Tolstoy,” it has a current population slightly over 8,000 and is the administrative center of a rich agricultural region. As of 2014, there is no passenger service at the station. Freight trains, however, still rumble through, past the large clock always set at 6:05.