Why are there so many lions in St. Petersburg? (PHOTOS) 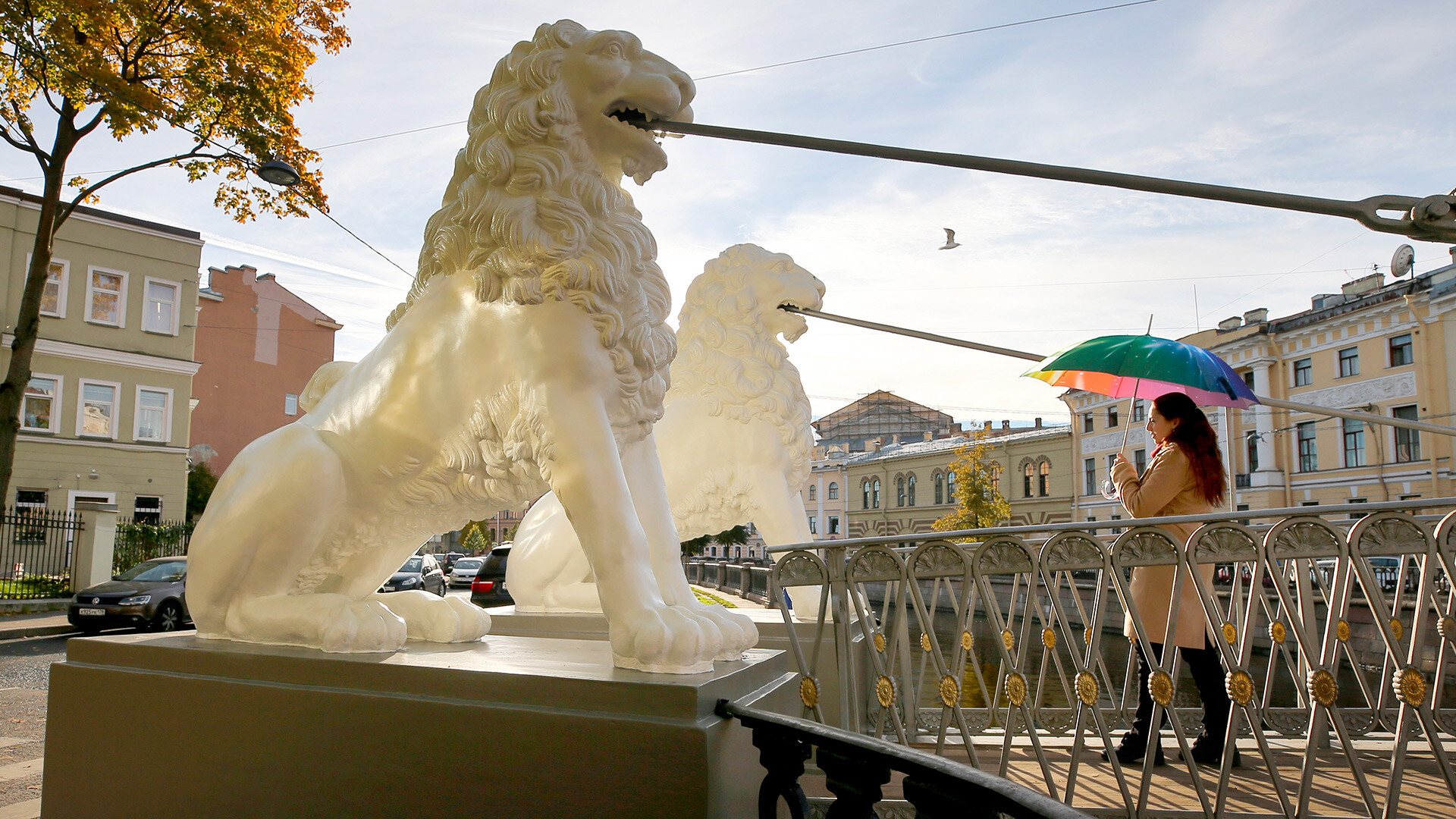 At the Lion Bridge.

Peter Kovalev/TASS
Lions have never been found in this - or any other - part of Russia, but one can see them made in stone or metal on just about every corner in St. Petersburg. And they did not appear there by chance.

Lion sculptures seemed to be liked by the builders of Russian cities. But, in no other city in Russia will you find such an incredible number of lion sculptures as in St. Petersburg. There, one of them admires the sunset on an embankment, holding a globe with its paw. 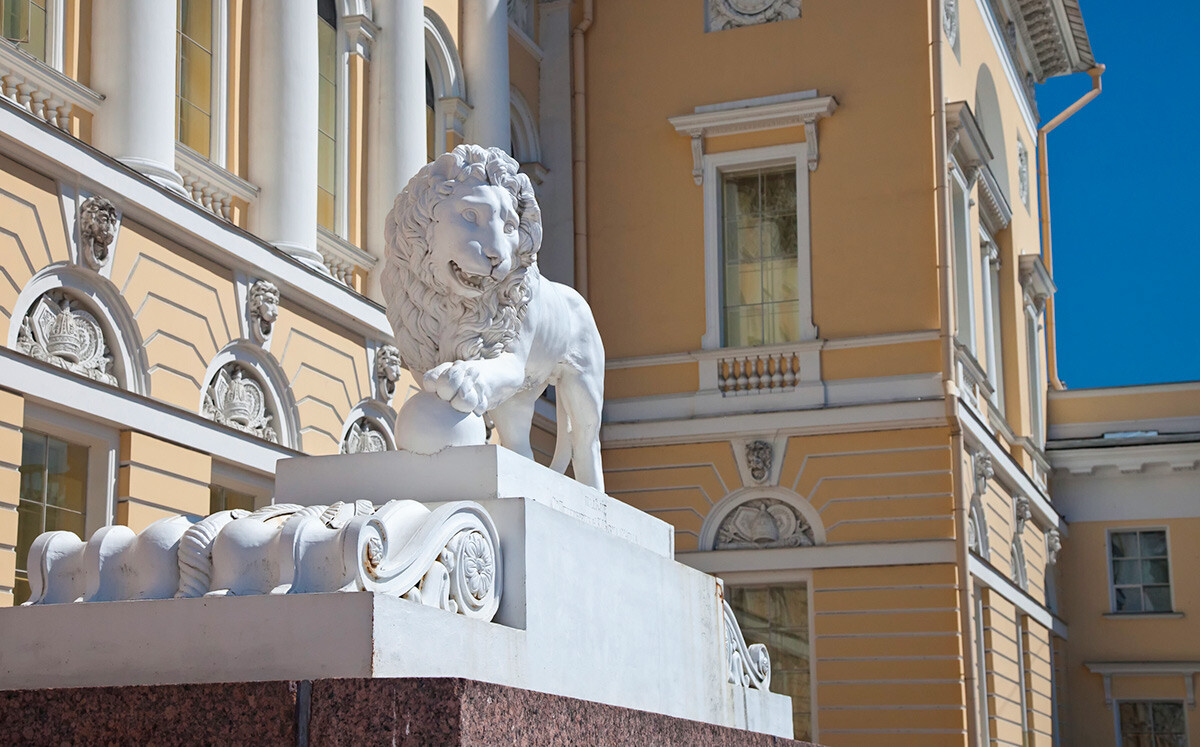 A lion at an entrance to the Russian Museum.

A couple of others, grinning, guard a suspension bridge, while others greet guests at the estates of nobility, holding chains in their jaws. Surprisingly, it’s not known exactly how many lions there are in the city, but experts say that there are more than a thousand. And each lion has its own fascinating story. 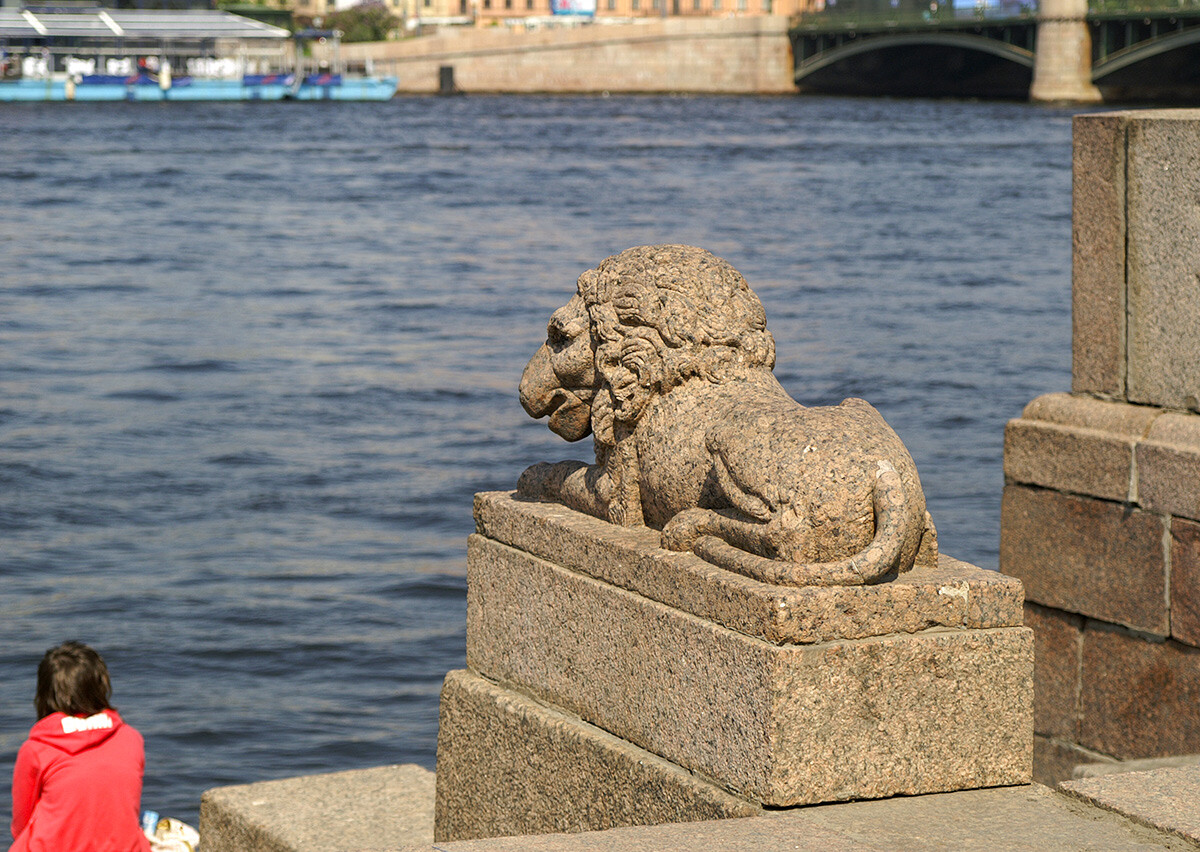 Enjoying the Neva River with a lion.

Images of lions symbolize power and military prowess and are very common in European heraldry and sculpture. Figures of these animals can be seen in Rome, Madrid, Paris and many other cities. This tradition has been going on since ancient times: a great number of ancient Greek and Roman legends are dedicated to lions, in which they are described as guardians of the gods. 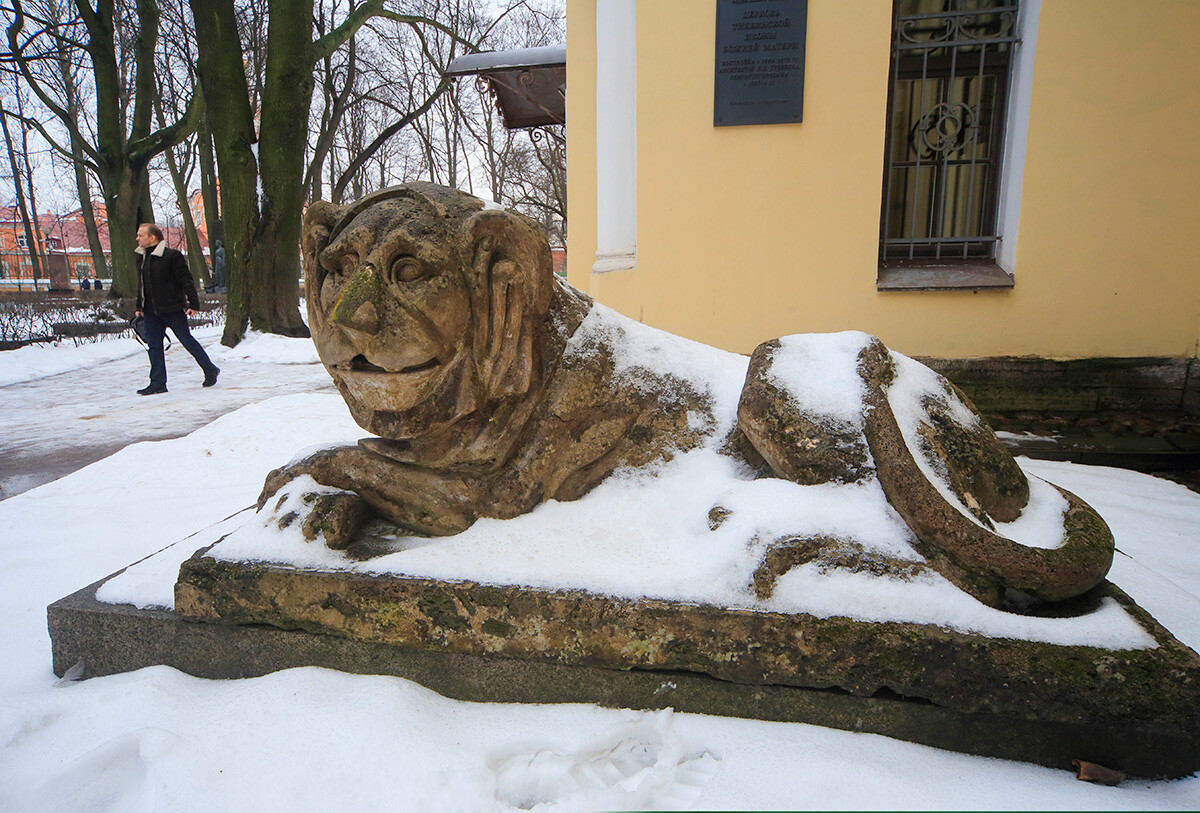 And when the Russian emperor Peter I founded St. Petersburg in 1703, he conceived it not just as a northern port on the Baltic Sea, but also as a powerful European capital, the capital of the empire. St. Petersburg stands out from other cities in the country: luxurious Western-style palaces, drawbridges, wide streets, regular layout of buildings and public spaces. And, of course, literally from the first days of the existence of the city, the vogue of lion sculptures appeared in the architecture. Even on the bust of Peter I himself, installed in front of his house, one can see the muzzle of a lion on his shoulder. 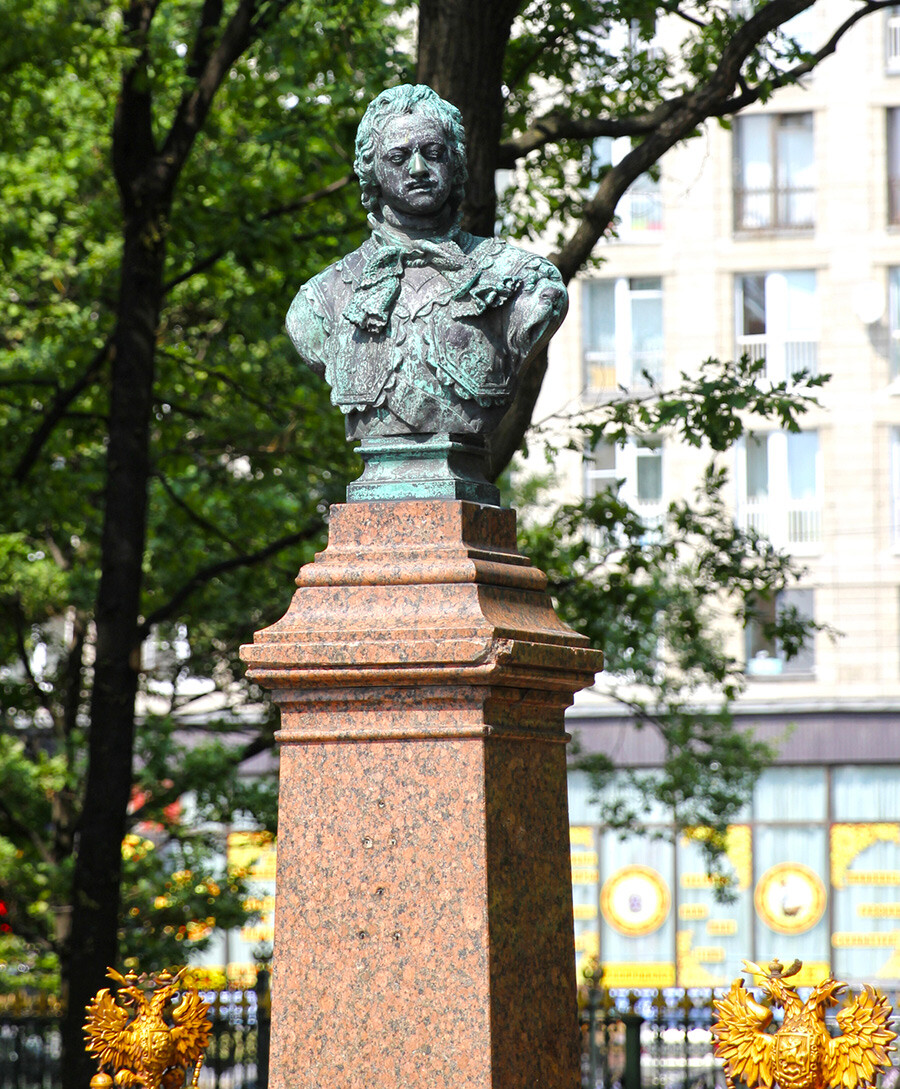 Take a look at his shoulder.

In 1973, the city’s ‘lion’ theme became the backdrop for Eldar Ryazanov’s amazing comedy ‘Unbelievable Adventures of Italians in Russia’. According to the plot, several Italians, in the guise of tourists, arrived in Leningrad to find treasures hidden “under the lion”. 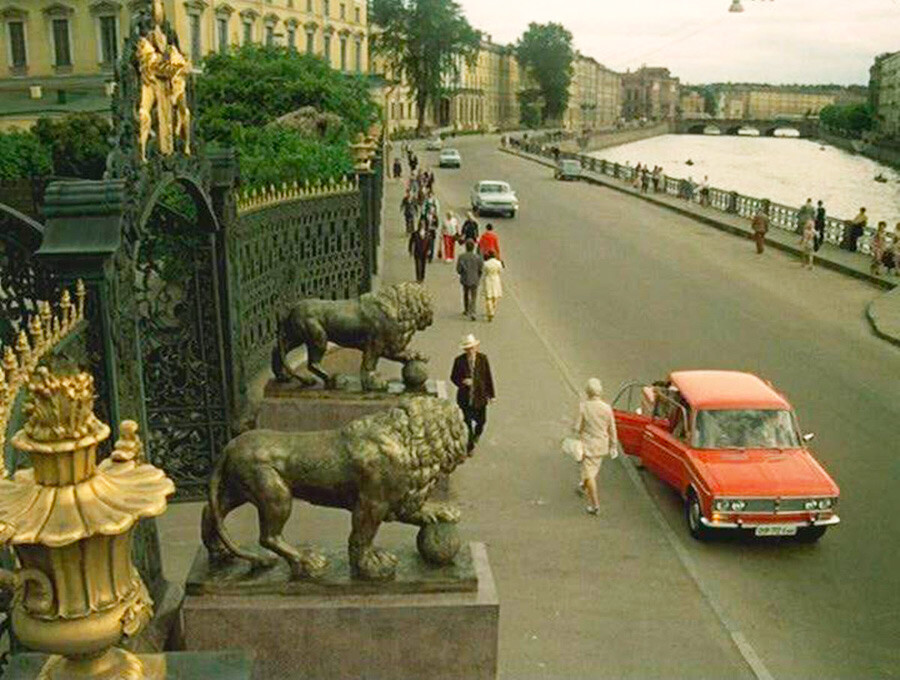 The scene from the Ryazanov's movie.

They truly dig up the entire city in search of the pre-revolutionary treasures. It’s all because, as mentioned above, these sculptures are on every corner. One character even says that there are more lions here than inhabitants.

The most famous lions of St. Petersburg 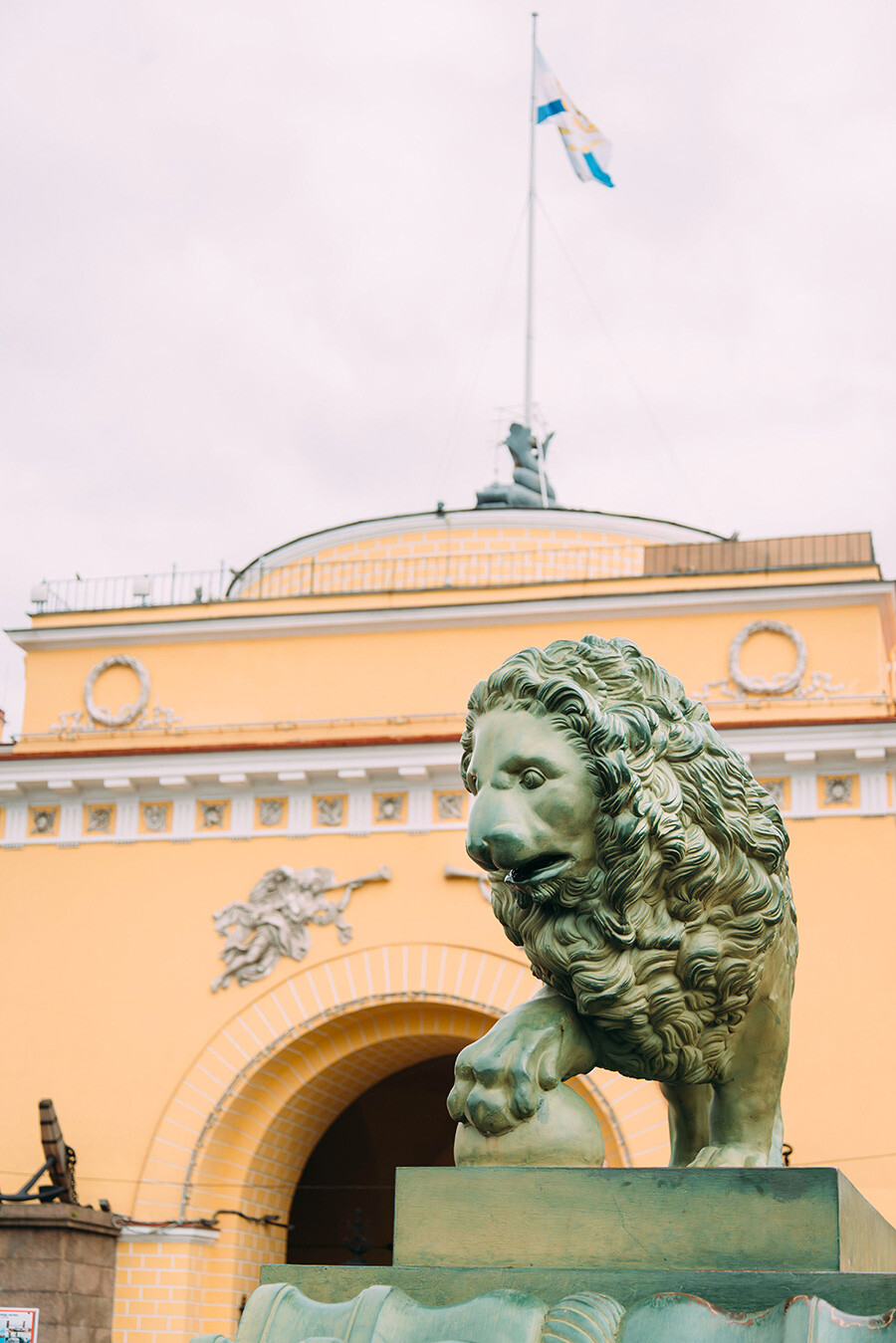 A lions at the Admiralty.

Lions playing with balls in front of the Admiralty are perhaps one of the most recognizable sights of the city. The sculptures cast in copper have been standing here since 1832, when they founded the Admiralty. What do you think the balls are? It turns out, there is such an ancient legend that guardian lions keep one of their paws on the ball at night so as not to fall asleep. And, if they doze off, the paw will roll down and they will wake up. So, when you see a lion with a ball under its paw; know that it is on guard and keeping an eye out! 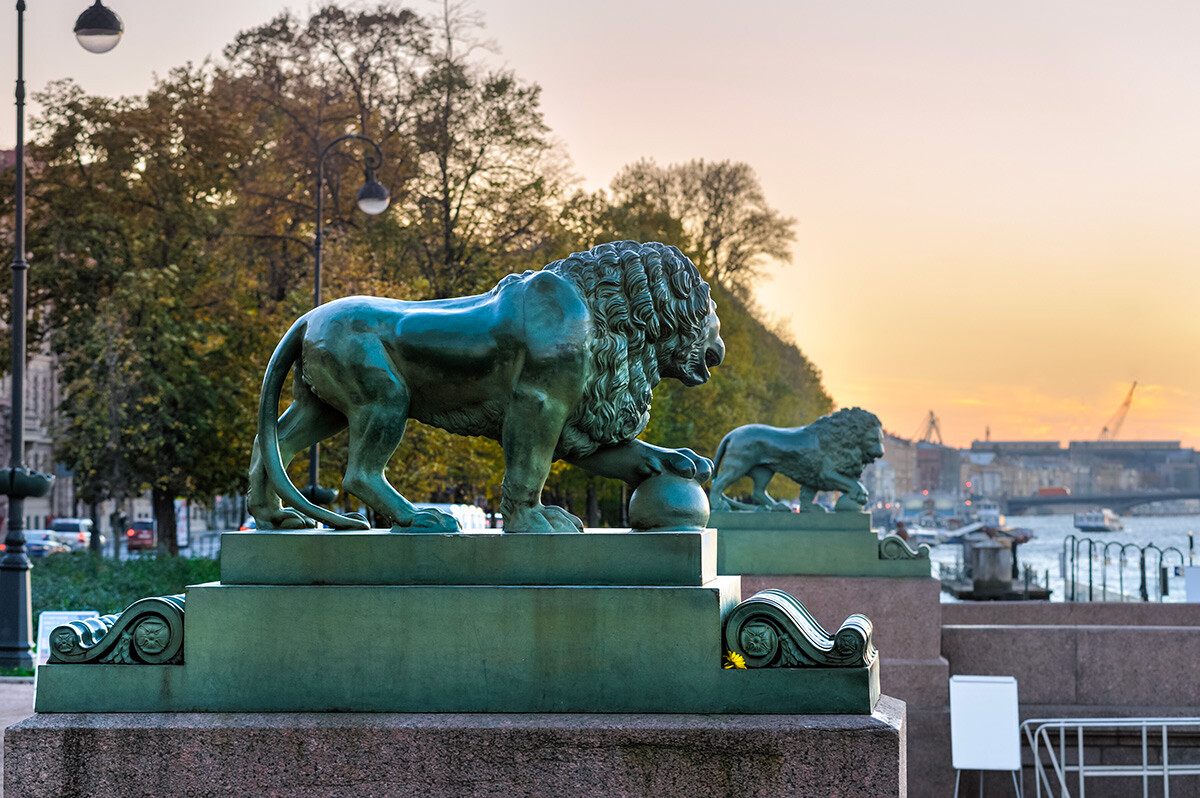 Lions at the Admiralty embankment.

On the Griboyedov Canal, one can find a bridge built in the 1820s called the Lion Bridge. The chains of the bridge are “held” in the jaws of four white, cast-iron lions, hiding the pylons and fasteners. 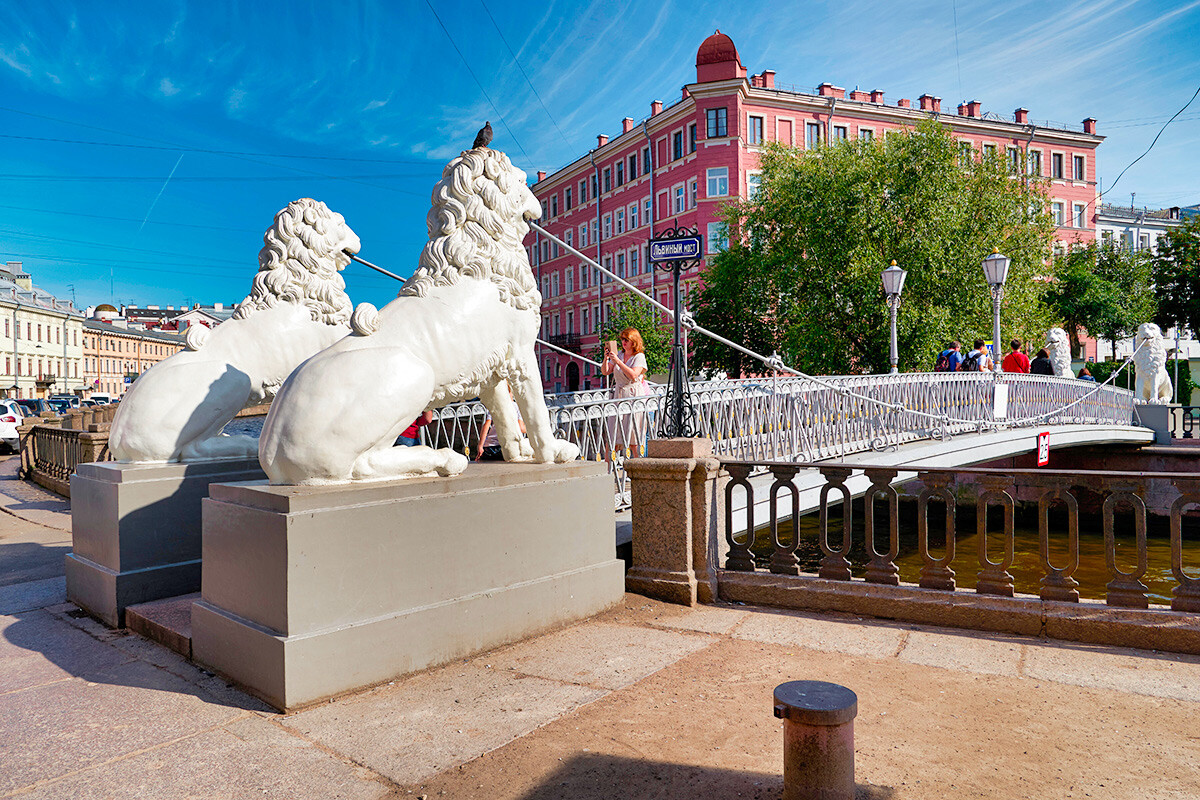 At the Lion Bridge.

On Sverdlovskaya Embankment near the Bezborodko estate of the mid-18th century, one can see as many as 29 sculptures. The cast-iron pride of lions hold in their jaws a single chain along the perimeter of the estate. The house itself is very dilapidated, but the sculptures are perfectly preserved. 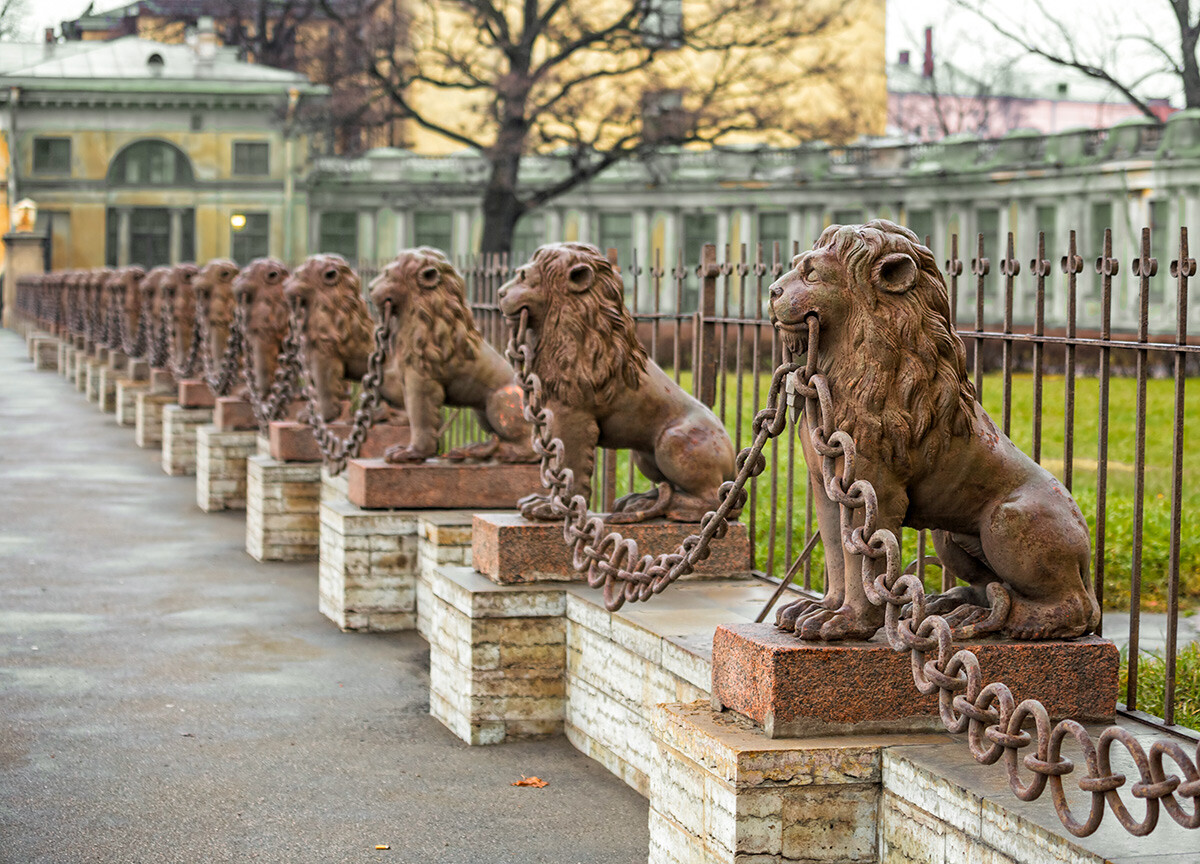 Fence of the summer residence of Kushelev-Bezborodko of 29 lions.

A huge number of lions “live” not only in St. Petersburg itself, but also in its vicinity: Peterhof, Pavlovsk, Kronstadt. 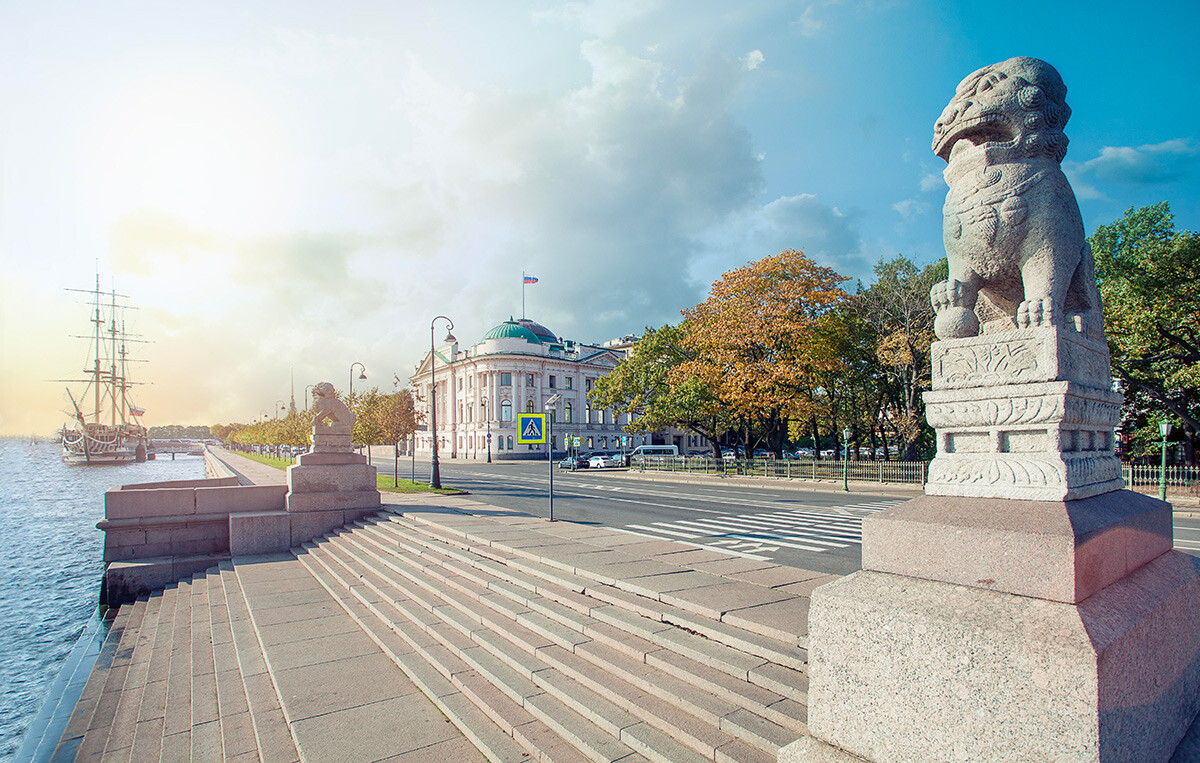 On Petrovskaya Embankment, you can find quite extraordinary Shishi [or Shi Tza, or Shi Cza] lions. These are the guards from Chinese mythology, which are usually placed in front of the entrances to Temples. In Chinese tradition, lions bring good luck and protect against evil forces. These granite figures were made in Manchuria at the beginning of the 20th century for one of the temples, but then presented to Russian neighbors. Since 1907, they have been decorating St. Petersburg. 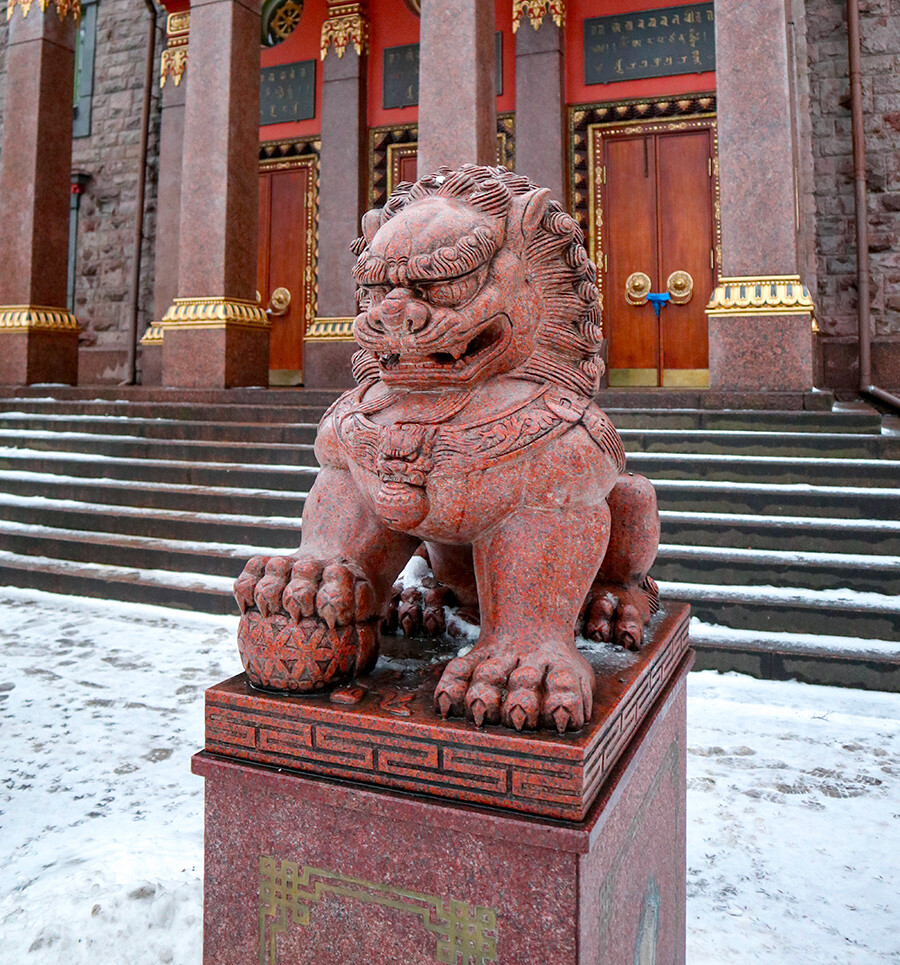 A stone lion at the Datsan Gunzechoinei on Primorsky Avenue.

There are also Chinese lions in the Garden of Friendship on Liteyny Prospekt, which was opened in 2003. They also have a ball under their paws. 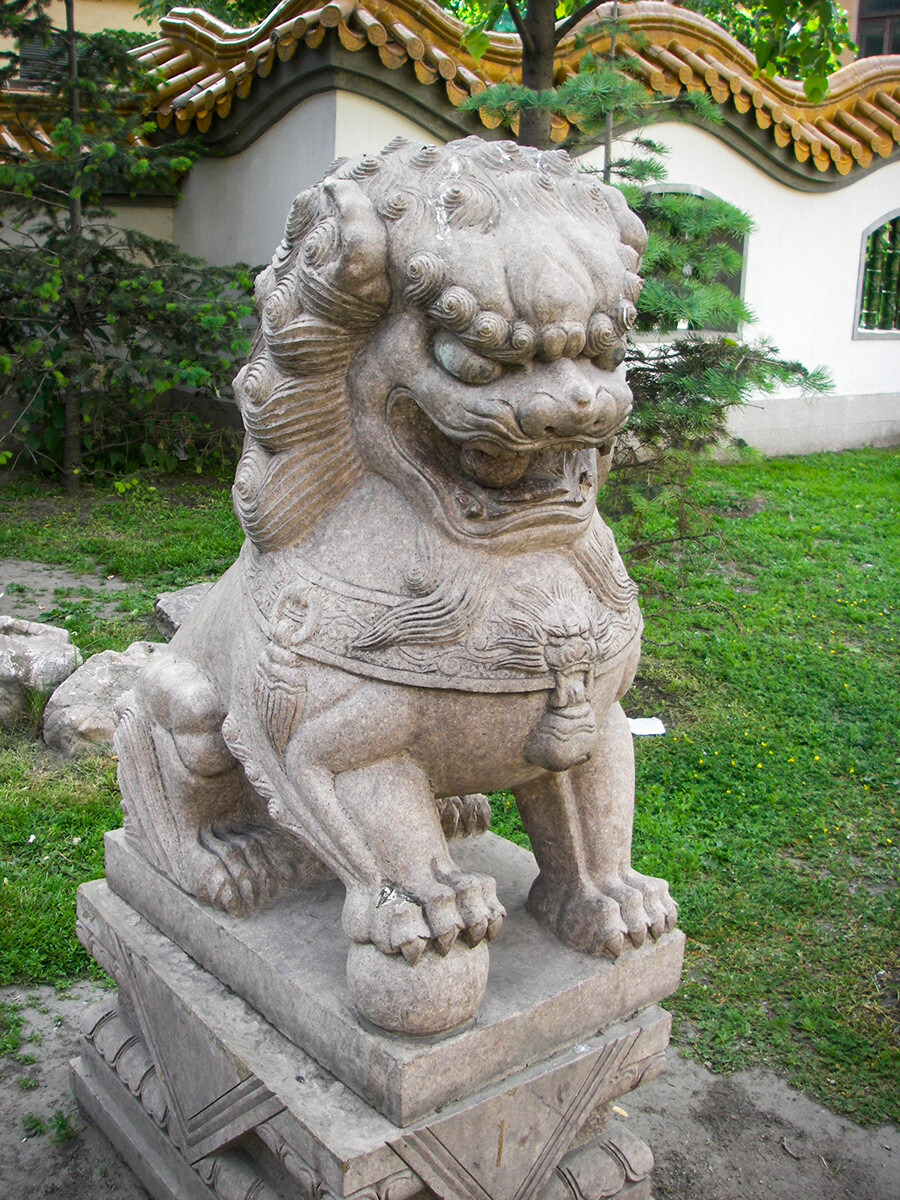 A lion at the Garden of Friendship.

Mythical griffins - lions with wings - guard the Bank Bridge in the center of St. Petersburg, which leads to the former Assignation Bank (the University of Economics occupies this building now). 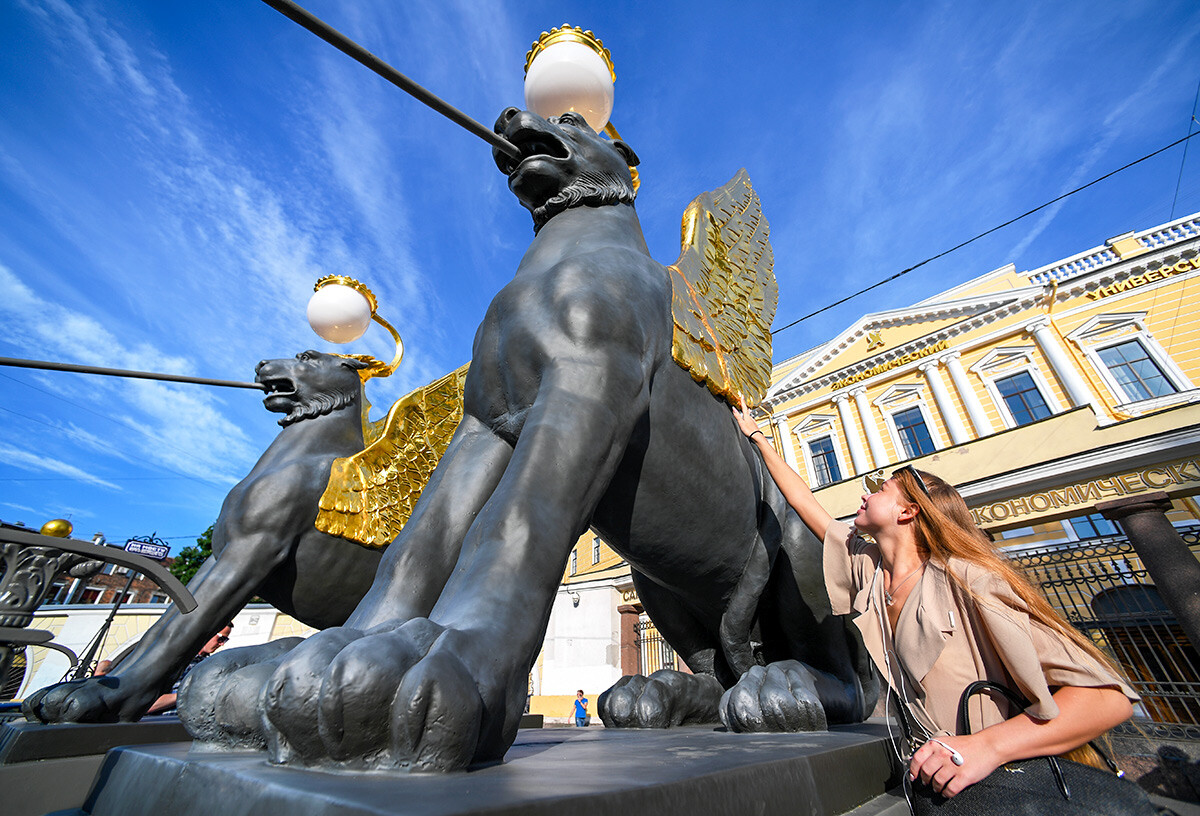 The griffins on the Bank Bridge.

According to ancient Greek legends, these were the griffins that guarded the gold in the country of the Hyperboreans. They were also called the ‘Dogs of Zeus’. They “guarded” the cash reserves of the Russian Empire. And they also masked the fastening elements of the bridge favorably indeed. 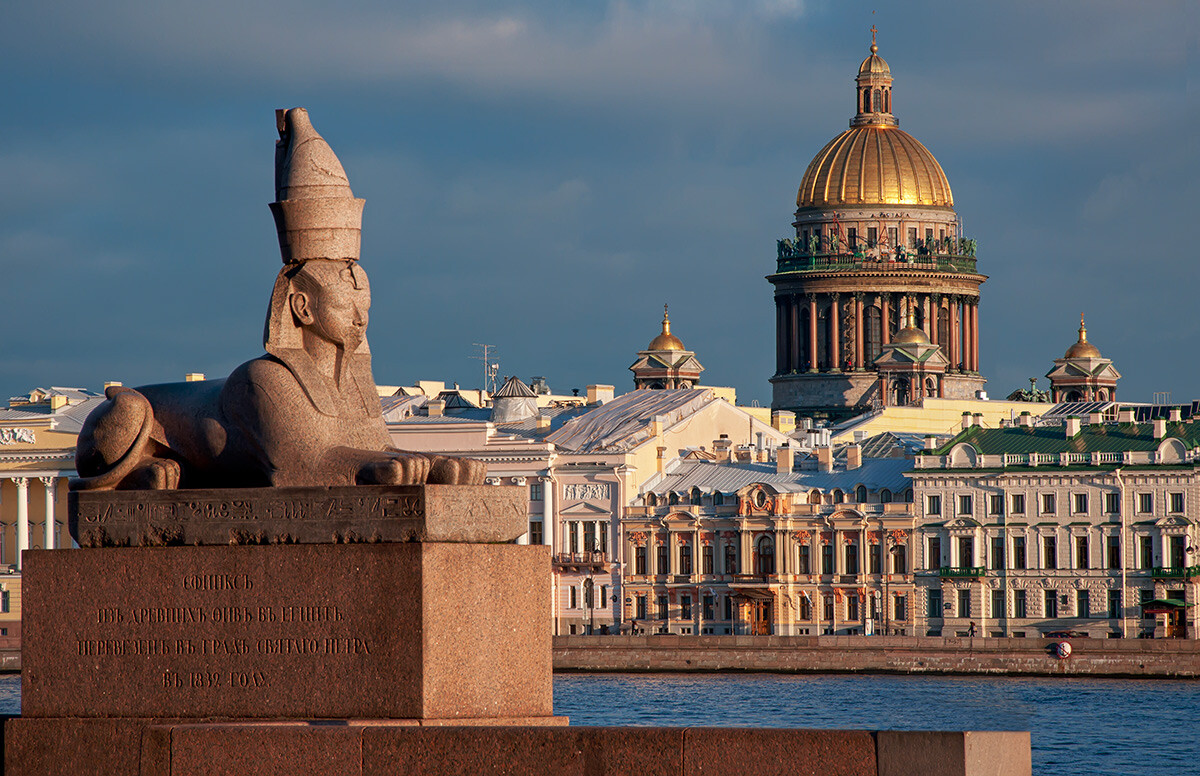 The most ancient lions “guard” the Academy of Arts: these are sphinxes, lions with the head of a human, brought in the 1830s from Alexandria by a member of the Academy of Sciences on the wave of interest in Ancient Egypt. These sphinxes themselves were created over 3,500 years ago.