Ruskeala: A tourist mecca on the site of an old marble canyon (PHOTOS) 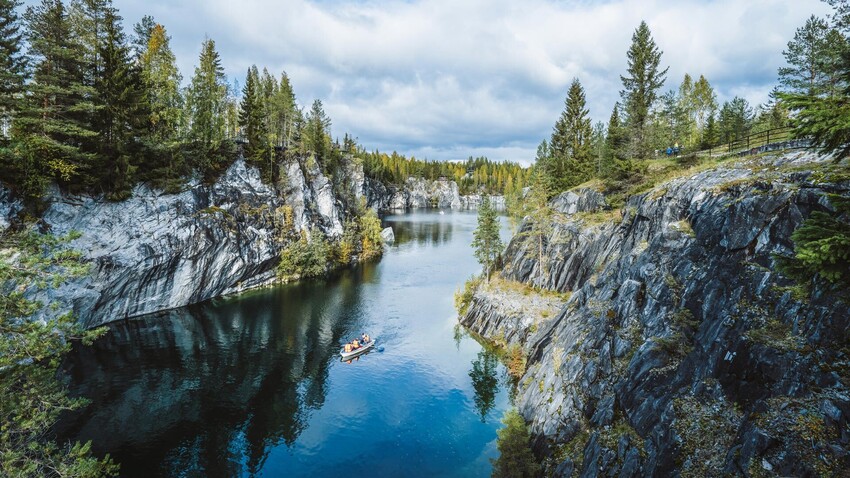 Igor Tichonow / EyeEm / Getty Images
At one point, the place that is home to the Ruskeala regional park used to be the site of a marble mine. That marble was used in St. Petersburg’s palaces and cathedrals for two centuries. The mine is no more, but the location still remains among the most beautiful in Russia.

The sound of a shiny bell is heard and the Sortavala-Ruskeala Express departs. The train can be seen from afar, thanks to the steam billowing from the exhausts. They fire it up ahead of time. It’s also the only steam-powered daily train in the area. 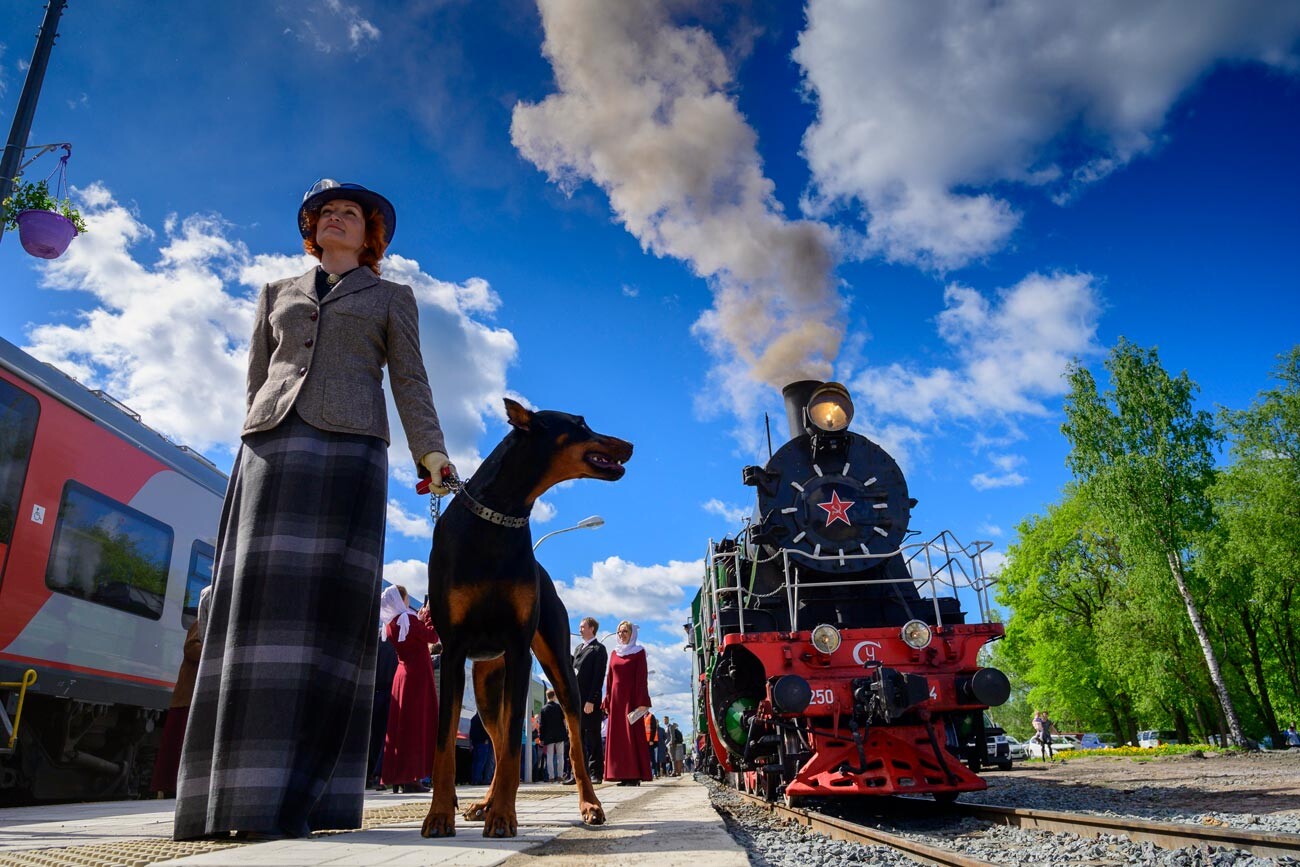 Getting to the canyon aboard it isn’t the fastest mode of transport (by car is much faster), but it’s, for sure, the most original: the Ruskeala Express is a retro train with a Hungarian locomotive and a 1949 interior design of the Nikolayevsky Express - the Russian empresse’s St. Petersburg - Moscow train. It’s decorated with carpeting, green couches, conductors in classical uniforms with gold stitching - and other things that add to the atmosphere. 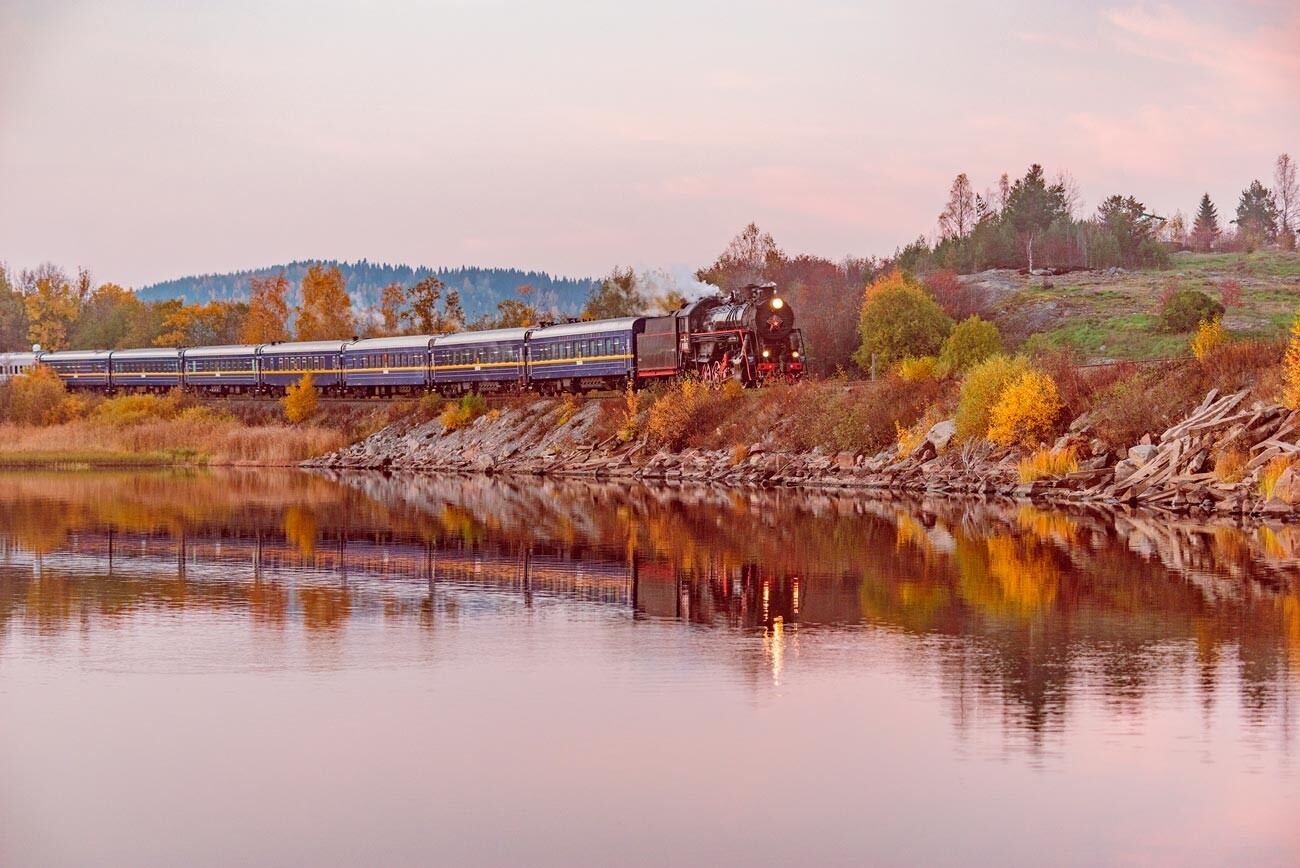 After the bells ring, it slowly starts up and, for an entire hour, runs through the northern Karelian landscape. Its destination is a village of what used to be just 659 people, according to a 2013 sensus. The journey is slow, considering the distance of just 30 kilometers. 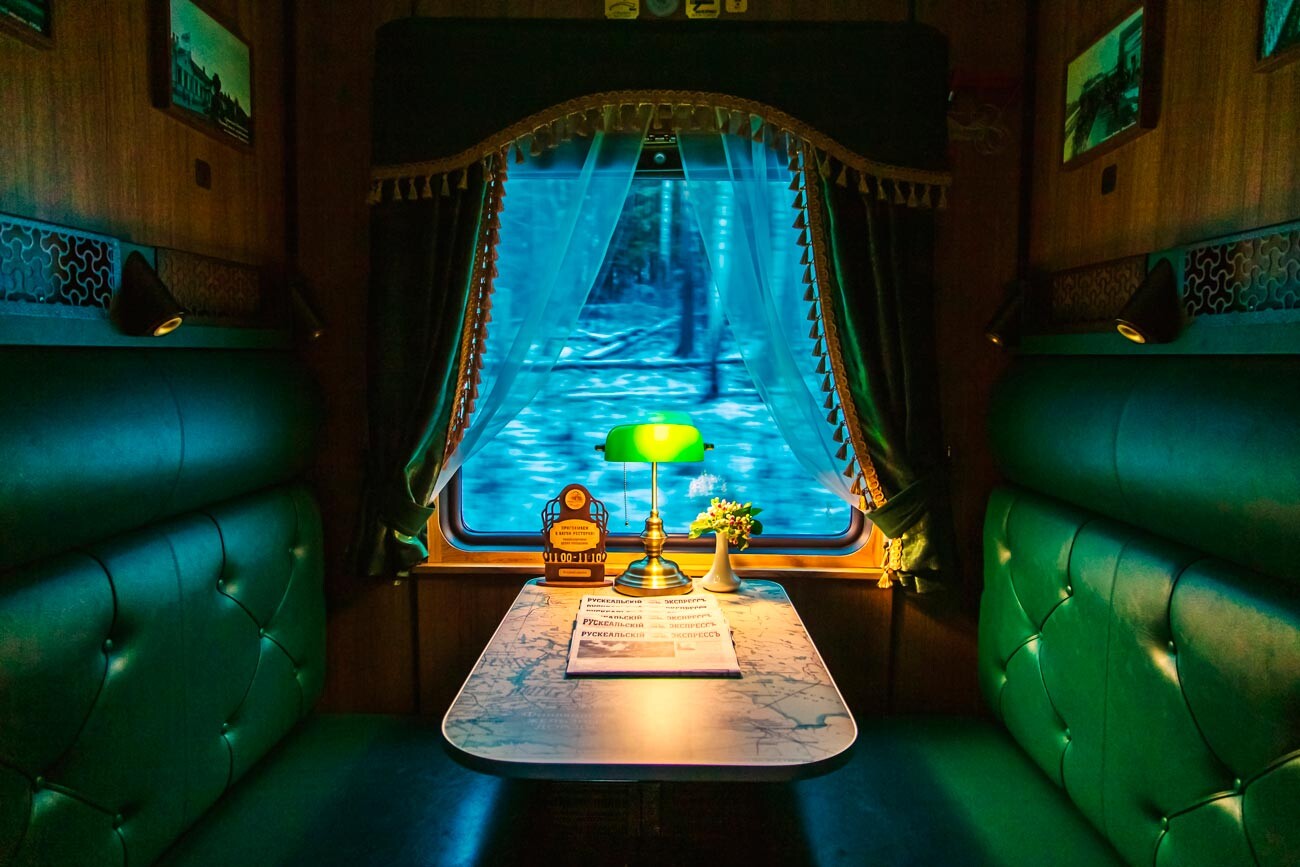 The tiny village of Ruskeala, right on the Finnish border, would be tough to locate on a map, if it weren’t for the fact that the actively developing St. Petersburg of the 1800s didn’t have a marble shortage. Rich nobles, as well as Catherine II herself - erected palaces that required expensive materials. The tsarist builders then focused their attention on the Ruskeala mine. Its marble was of outstanding quality and came in four colors - ash-gray, green-gray, white with gray and brown streaks and a mixture of white, gray and blue. 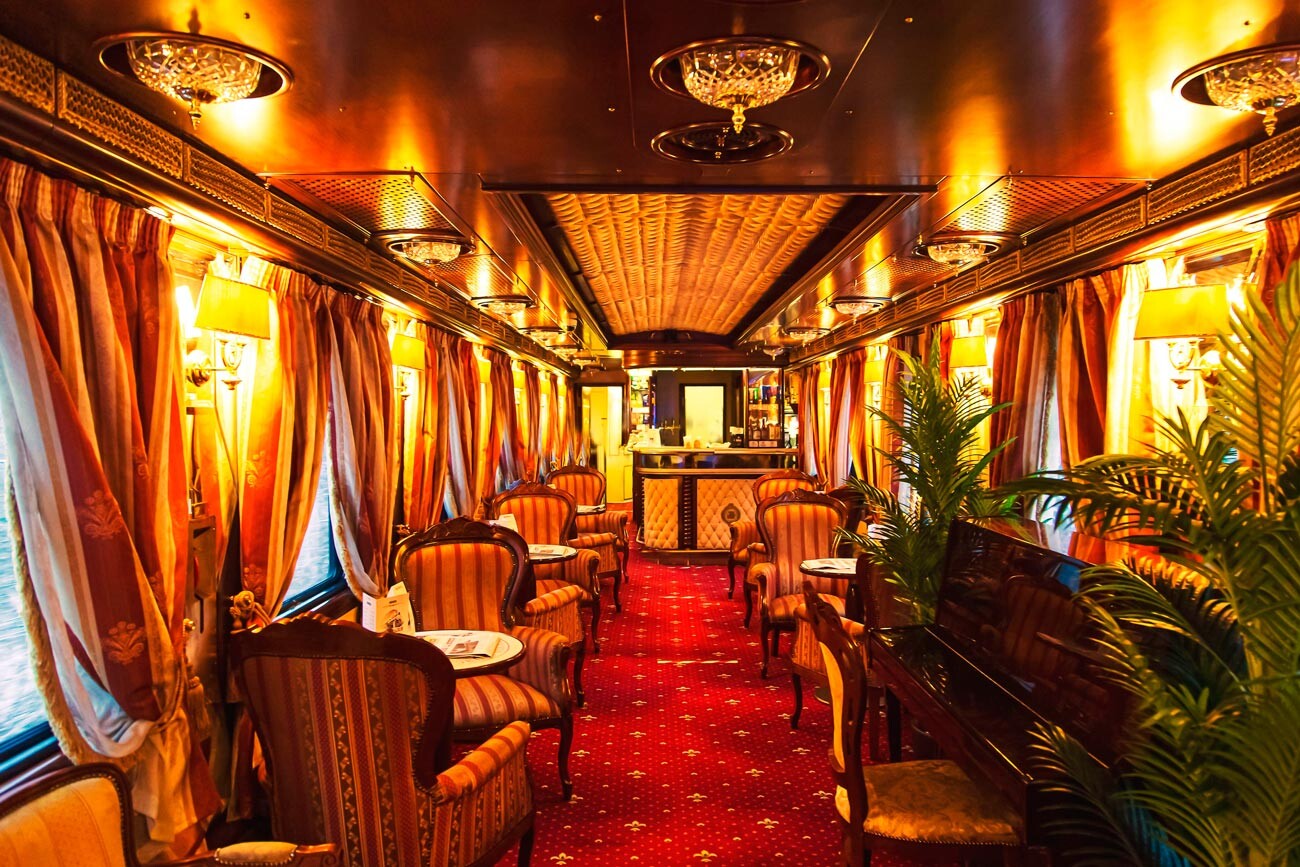 There was another factor. The marble gorge existed there since before the location was geologically surveilled. When Russia won the Northern War, it took from Sweden the Karelian shore of Lake Ladoga together with the gorge, which the Swedes had been developing since the late 17th century. However, after the gorge passed to the Russians, Ruskeala had simply been forgotten. So, it can be said that the major industrial tale of this small village began in earnest with the ascension of Catherine II to the throne. 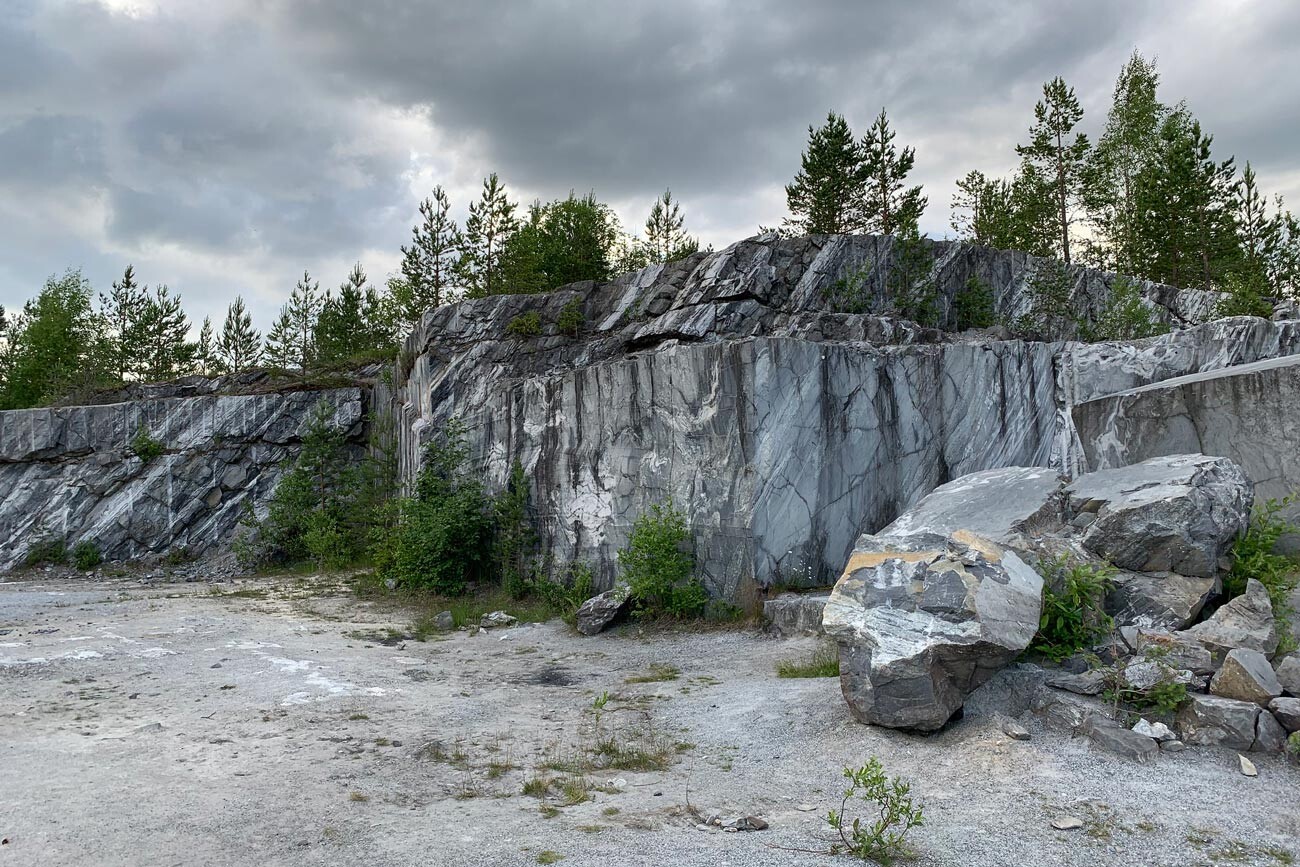 Master stoneworkers had arrived on the shores of the Ruskolka River from the Ural and began mining marble. At first, they’d used sleds to ferry the material to the peer. Then seaships took it across Ladoga to the capital. In only fifty years, more than 200,000 tons of marble were mined - used to make the facade for St. Isaac’s Cathedral, St. Michael’s Castle, the Marble Palace and half of the Kazan Cathedral, as well as the Hermitage Museum’s windowsills and other objects in the capital, including Gatchina, Peterhoff and Tsarskoye Selo. 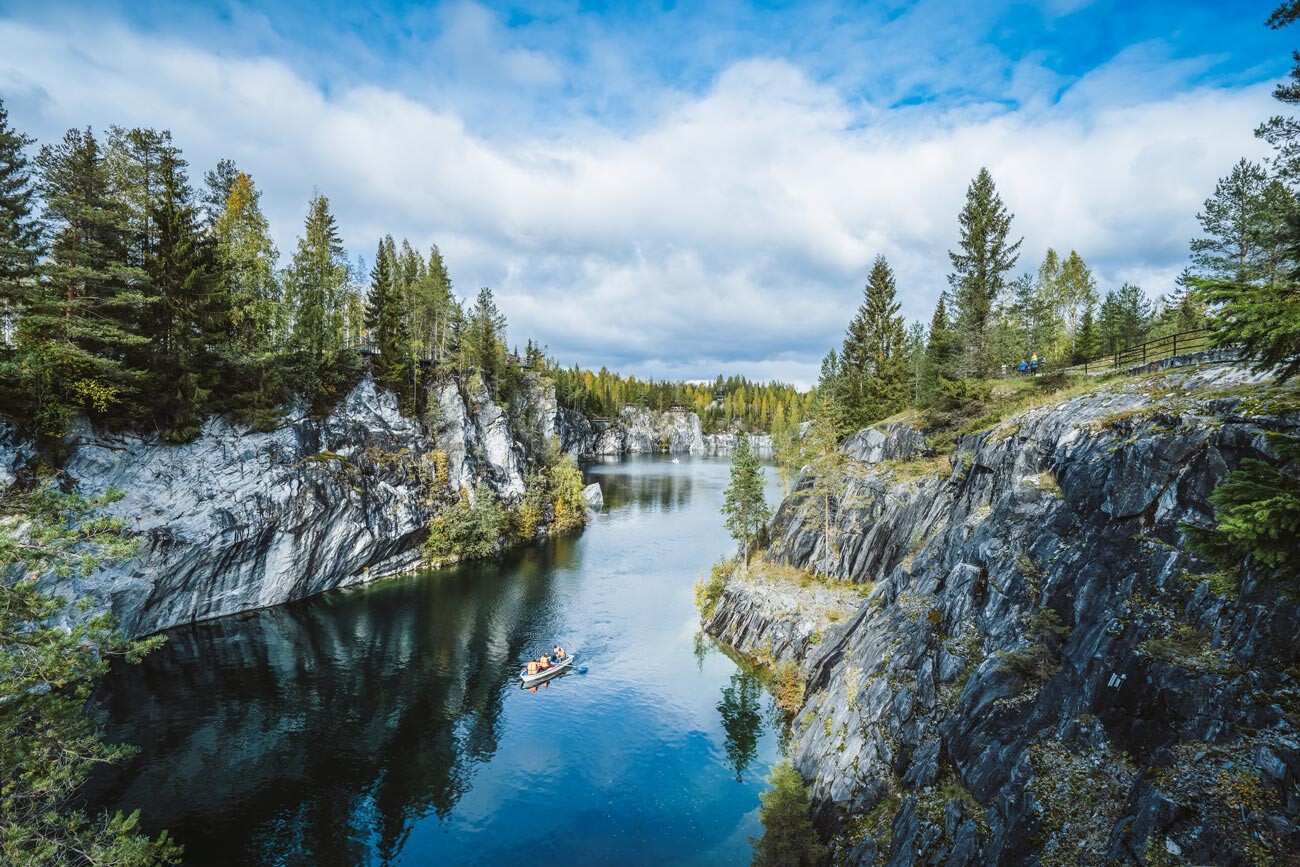 The mining operations went into a steep decline in the 19th century, when the fashion changed and granite became the preferred choice, instead of marble. Aside from that, the village itself changed hands several times: after the Revolution, the gorge passed to Finland, before returning to the Soviets and then, once again to the Finns in 1941. Its fate was finally decided in September 1944, when it returned to the USSR, and has remained Russian to this day. 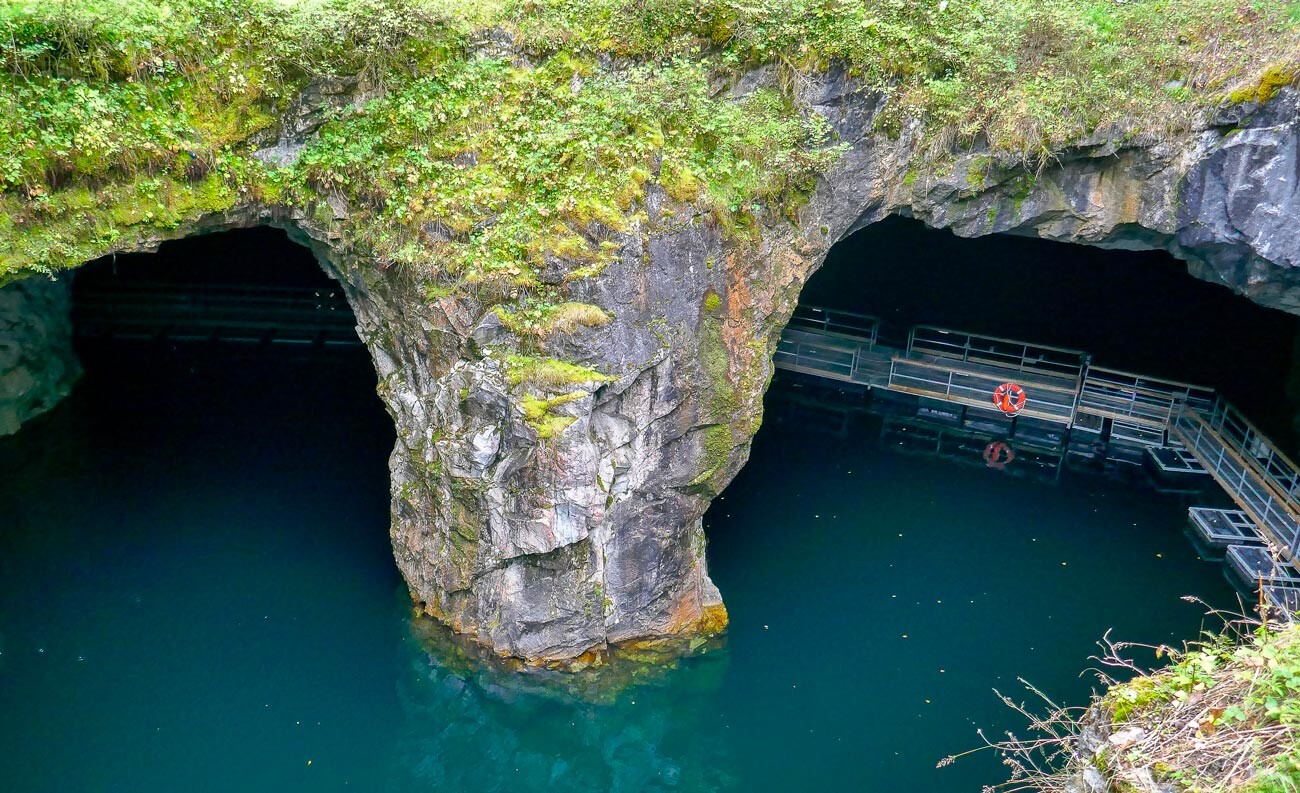 The gorge was used for mining lime and marble dust until the late 1900s, before the mine became unusable. The gorge did receive protected status as a cultural landmark and a monument to mountain mining. 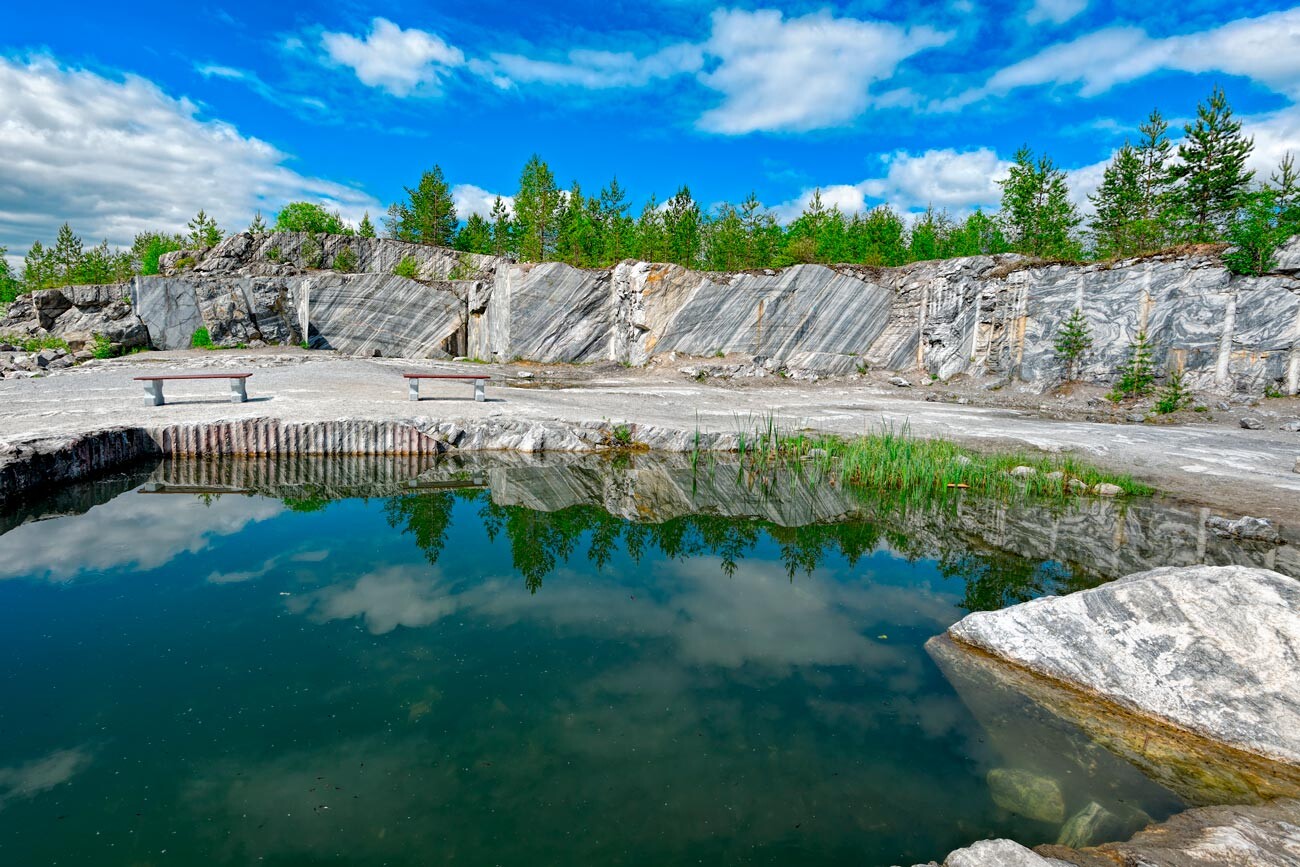 Back in 1939, the canyon filled with water and became a home to curious marble caves surrounded by mountains amidst crystalline waters - now the pride of Karelia and a national tourist destination. 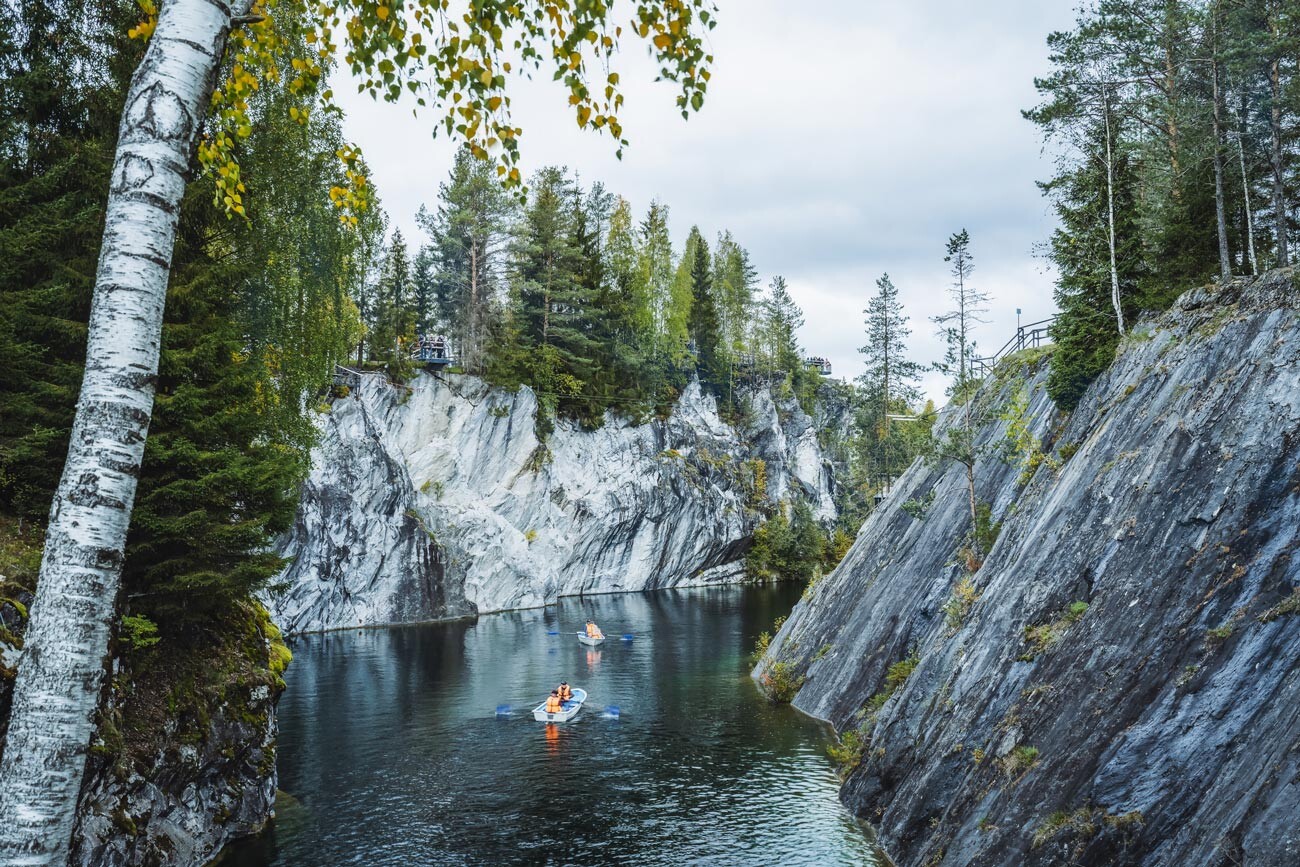 The ‘Ruskeale’ industrial park appeared there in 2005. The territory was spruced up and the site became a vacation spot, with the most exciting locations turned into tourist attractions. 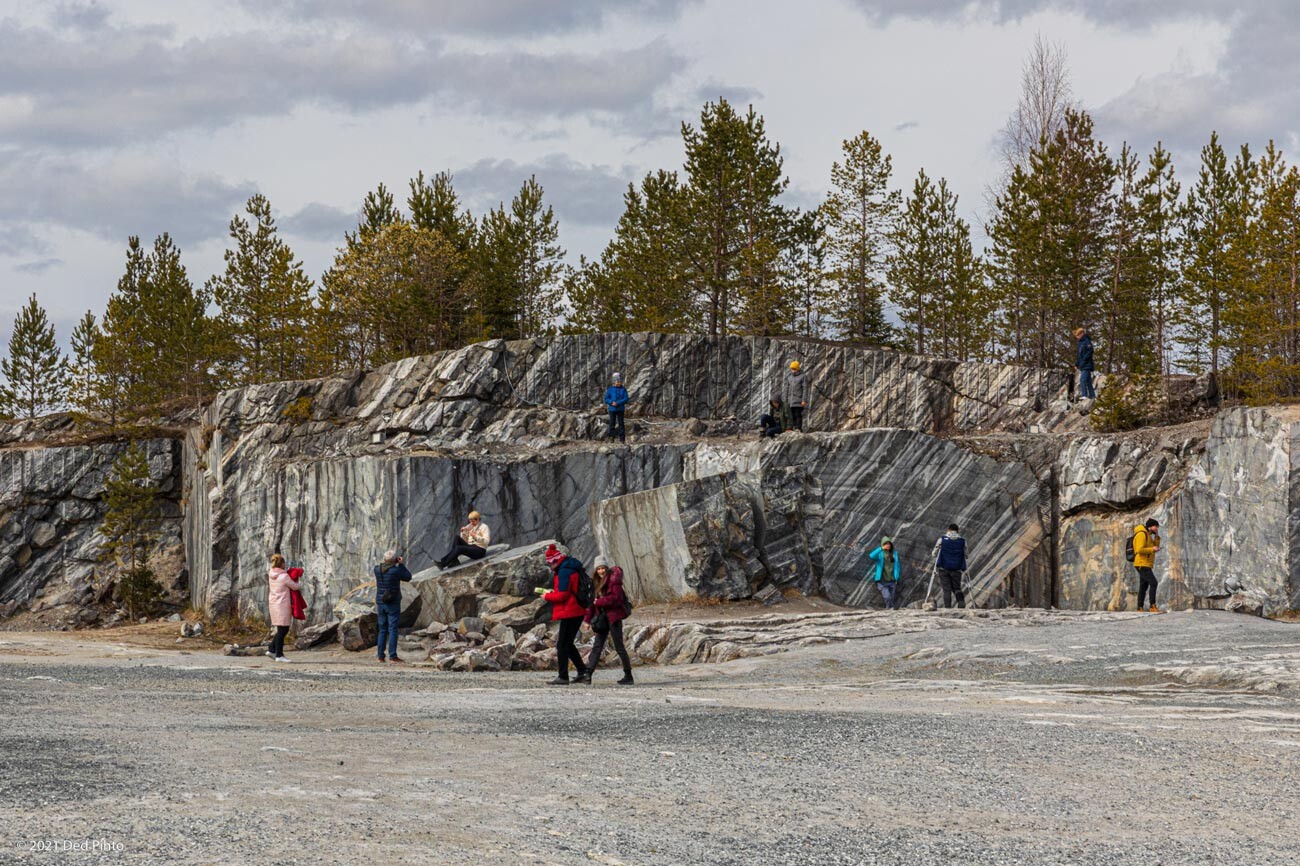 There’s also a 500-meter underground route there. Most natural galleries today are underground, with only one remaining above water and open to visitors. There are diving tours for those wishing to explore the rest. 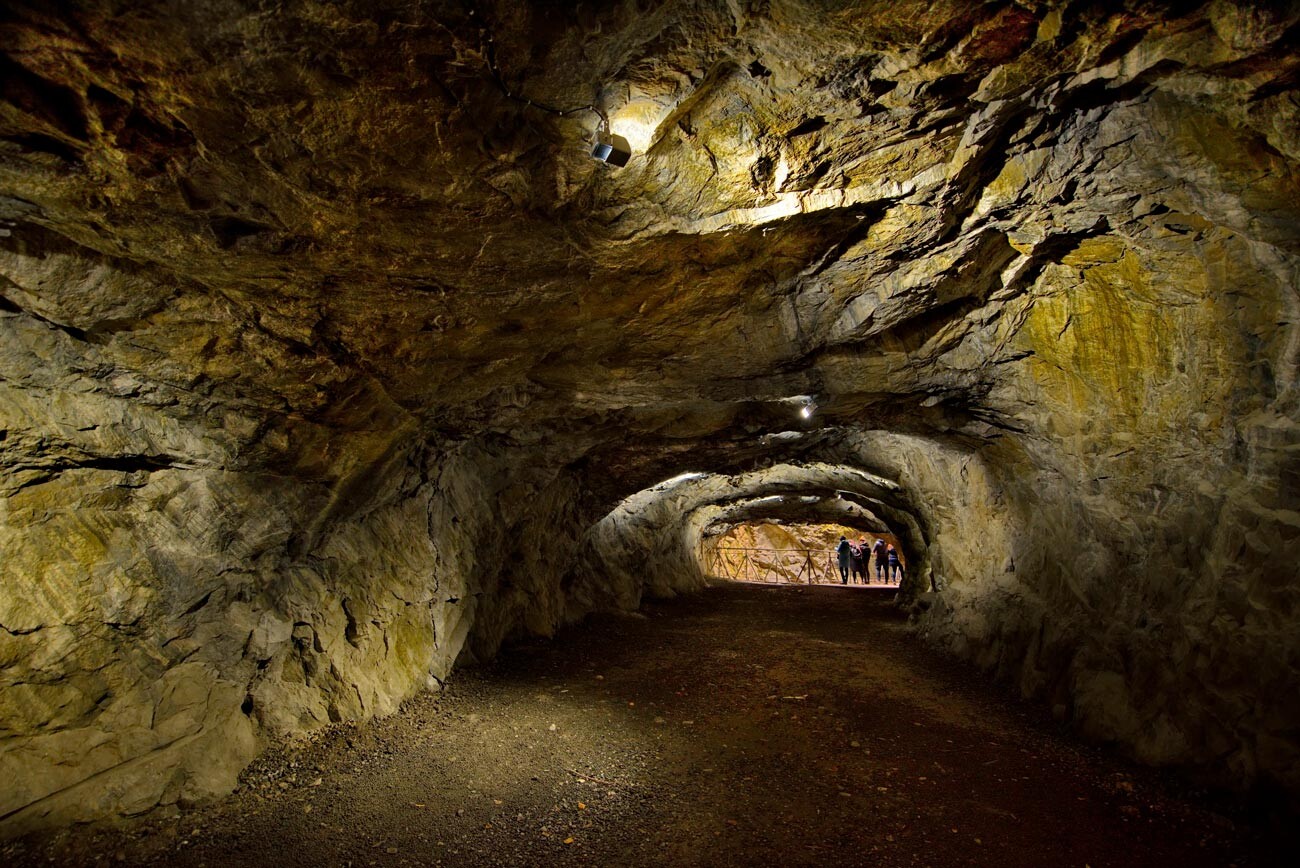 One of the most beautiful spots there is the marble canyon itself, 460 meters long and 100 meters wide. The water is crystal clear and you can see up to 18 meters down! 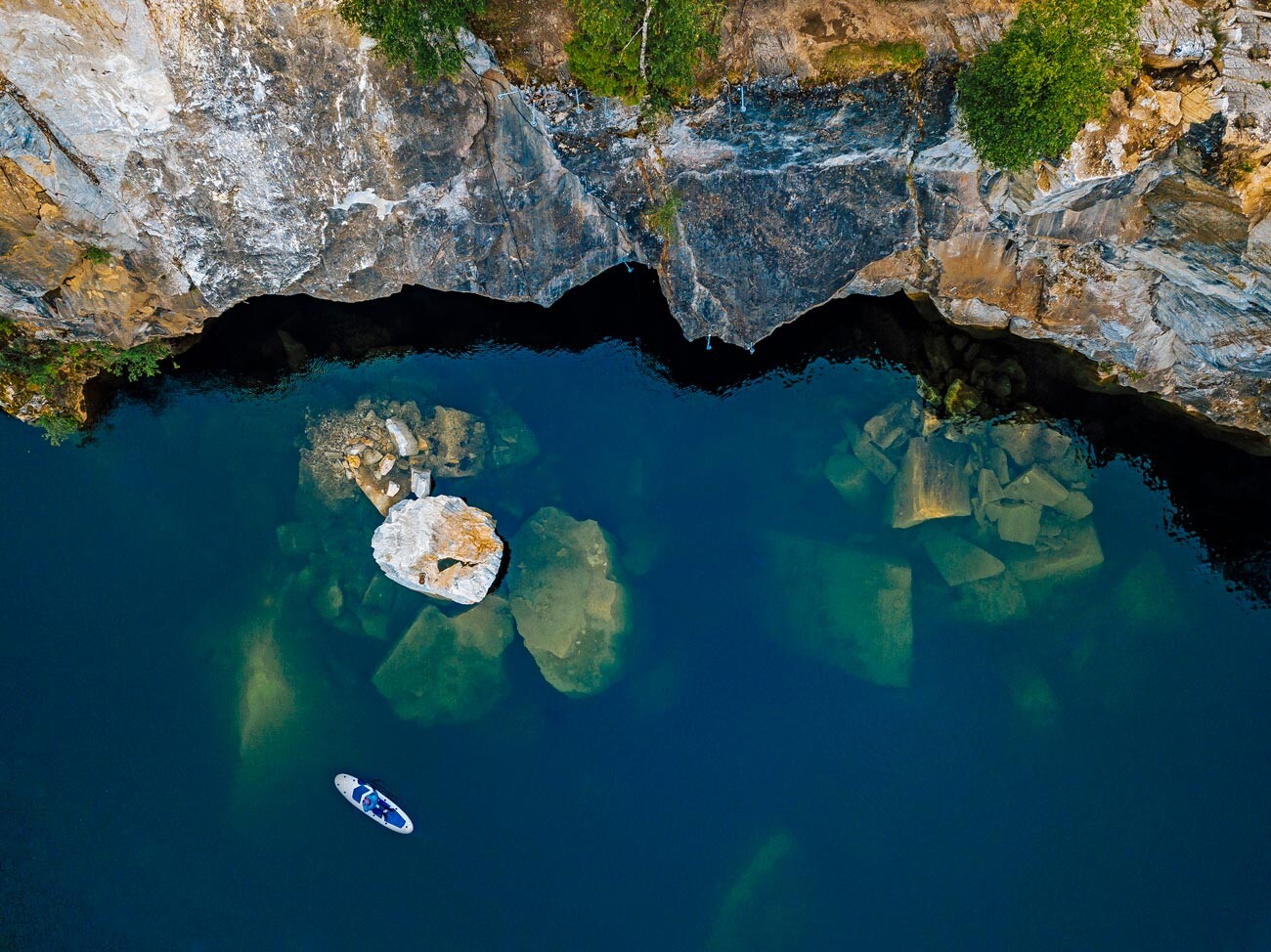 The canyon can be seen from the shore or you can rent a boat to get a better glimpse. There’s a zipline ride for extreme adventure seekers and even a 24-meter bungee into the canyon. A rope bridge also runs across it. 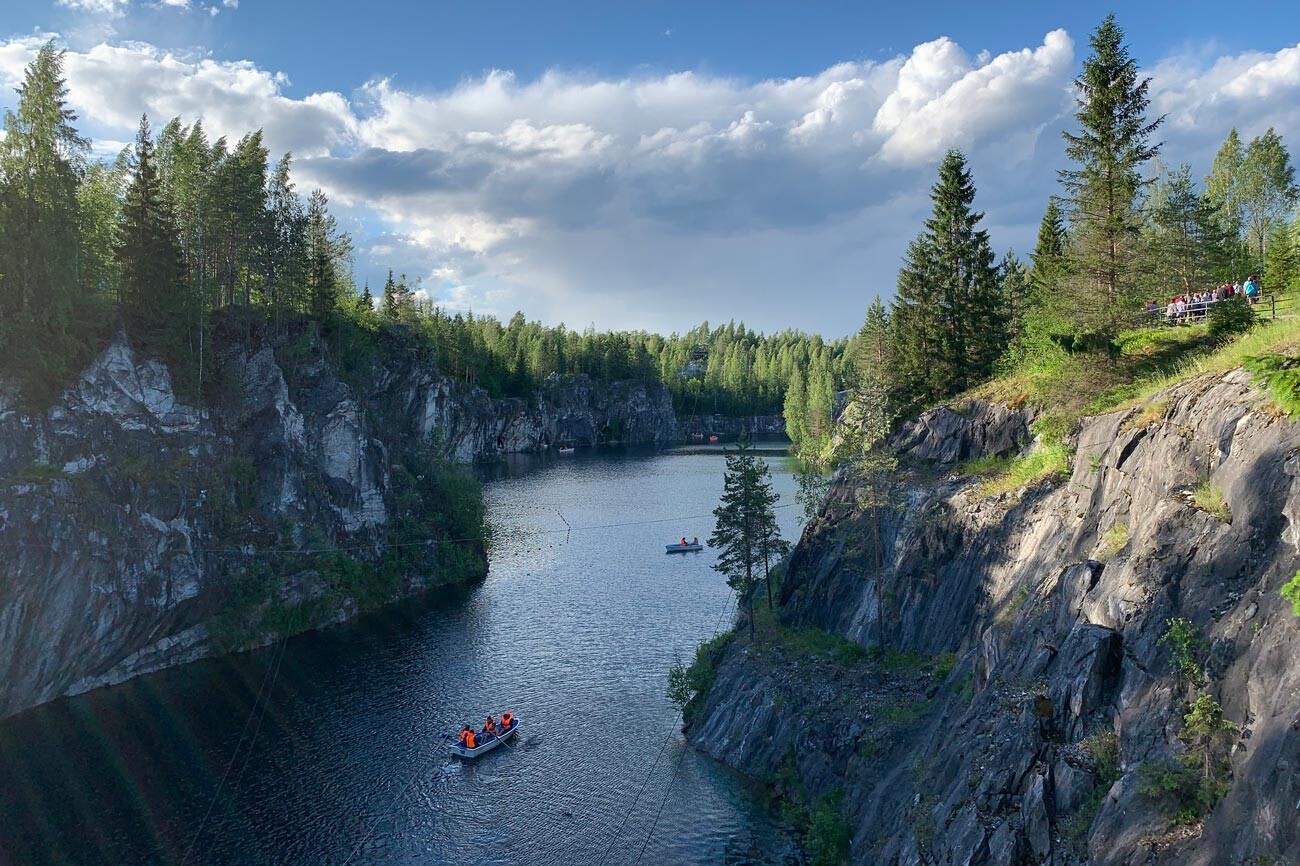 The park is an all-season affair and those who find it beautiful will not be deterred by northern frost. “We went in the winter, the worst time - it was -25°C. But it didn’t ruin the experience. Underground Ruskeala is a must-see during the winter, it gets really beautiful. Nature creates its artwork from frozen stalactites, stalagmites and stalagnates,” says Kirill from St. Petersburg. You won’t be able to walk around for long in the winter, though. There’s a coffee place and a souvenir store on the park’s territory, where you can wait for the express train to arrive. 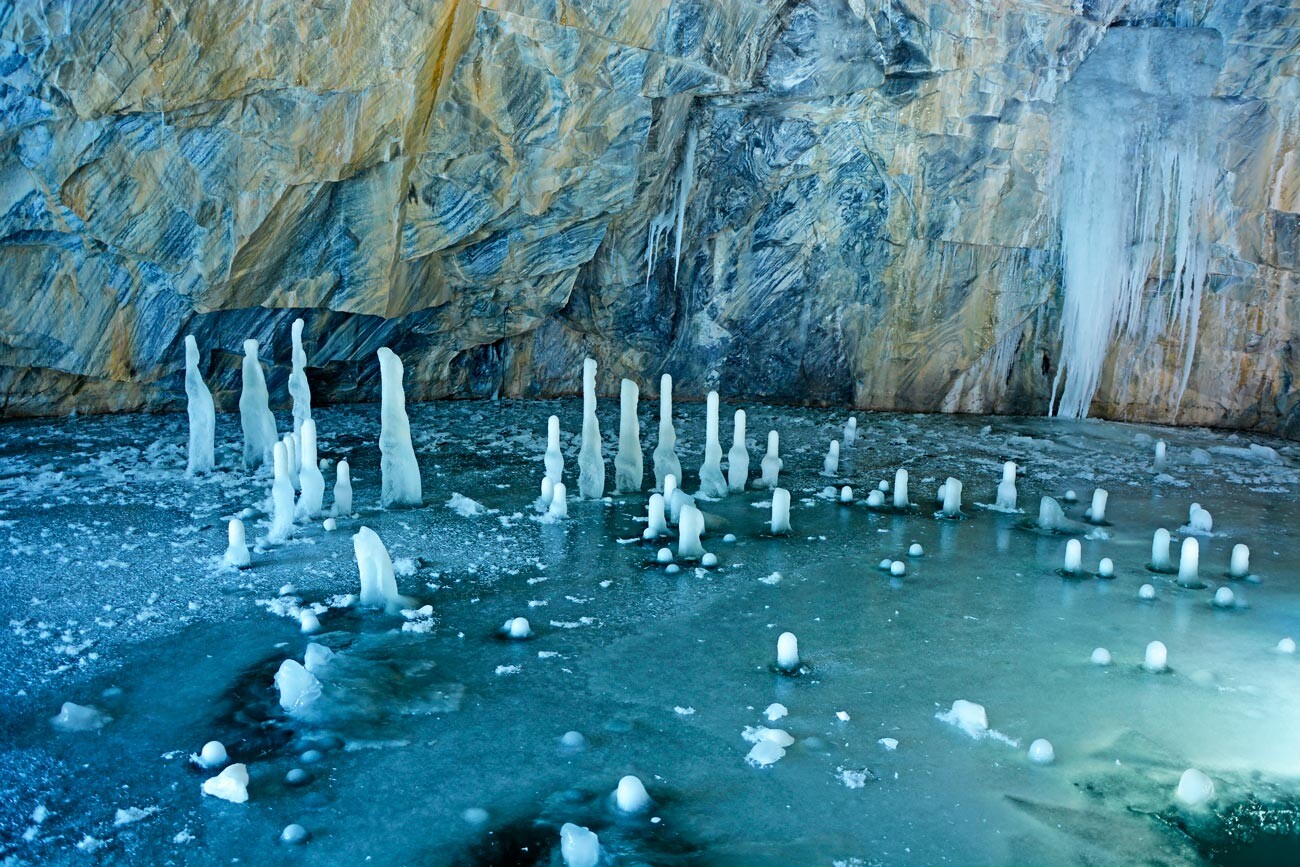 How to get there: It’s easiest to reach the place by public transport, using the ‘Lastochka’ speed train from St. Petersburg to Ruskeala, disembarking at Sortavala and switching to the retro express train, which takes you right to the park.