How does the largest pagan minority in Russia live today? (PHOTOS) 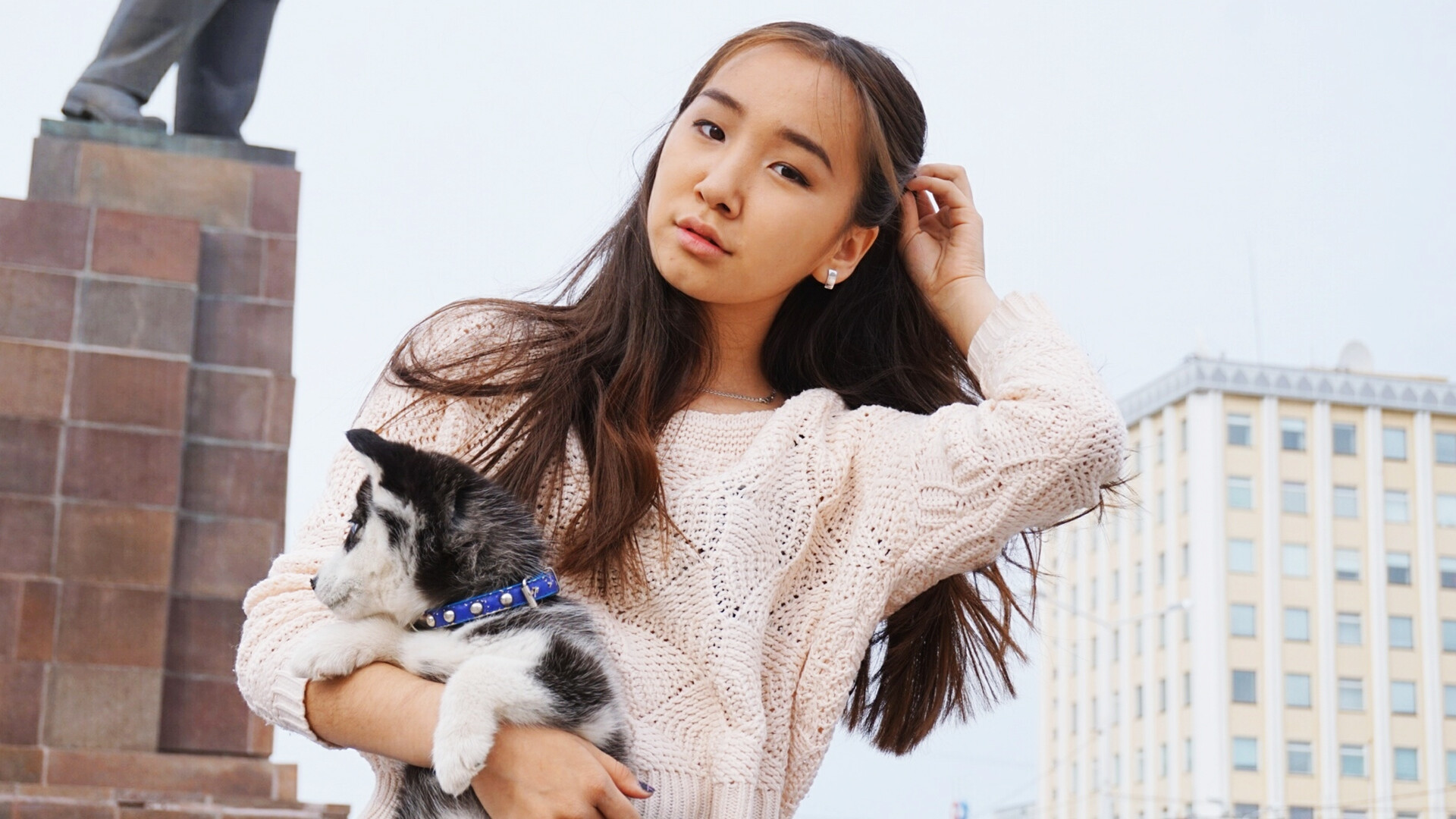 Polina Skrybykina / EyeEm /Getty Images
The indigenous people of Yakutia are well-educated and progressive. However, many of them have retained their traditional pagan faith and do wear folk costumes, though only once a year.

The Yakuts (or Sakha, as they call themselves) are a unique ethnic group in Russia, living in the largest and coldest region of the country, Yakutia. They make up about half of the republic’s population (466,000 out of 990,000 inhabitants), the rest being Russians (more than 350,000) and other indigenous peoples of the North, and have maintained their identity for centuries. 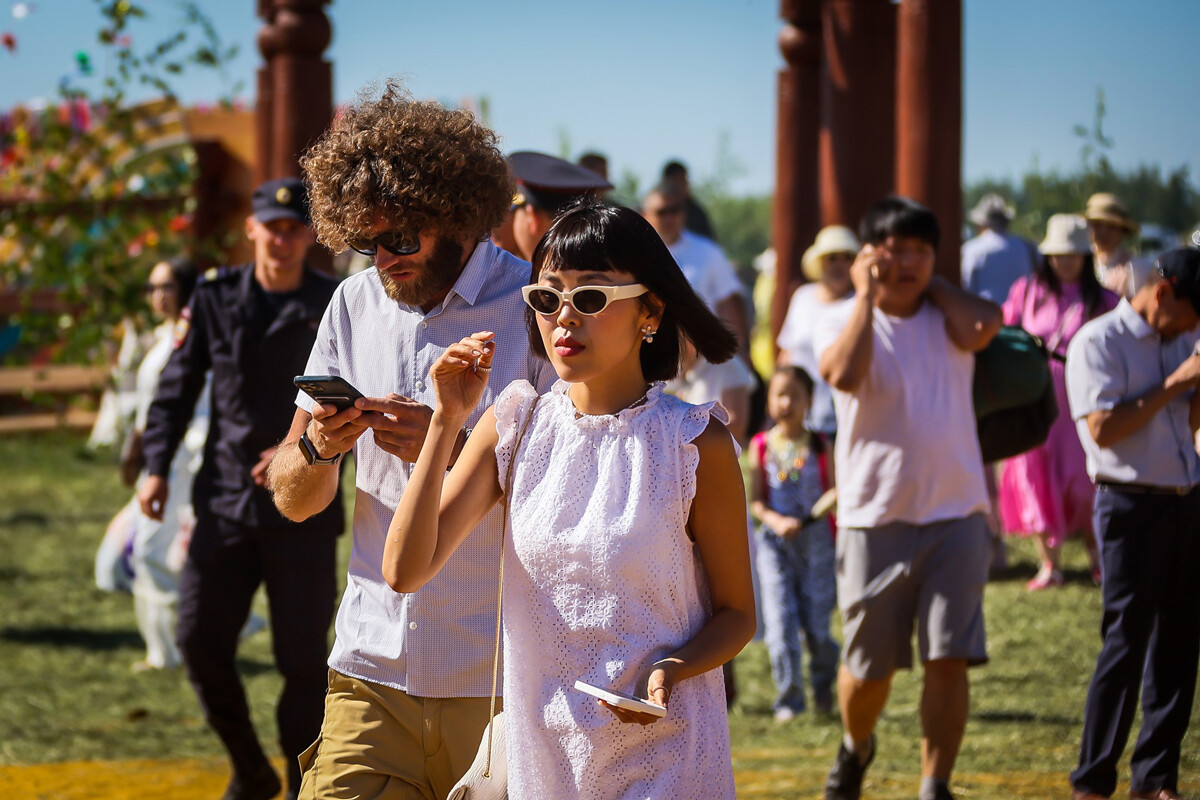 Yakut youth at the Yhyakh holiday.

Yakutia is a region with high wages, as it is home to the largest diamond mining companies, major scientific centers and the first IT park in the Far East, where game and app developers work (although, there are also nomadic deer breeders in the north, of course). Locals drive Japanese right-hand drive cars, eat Chinese ramen and young people wear K-pop style clothing. 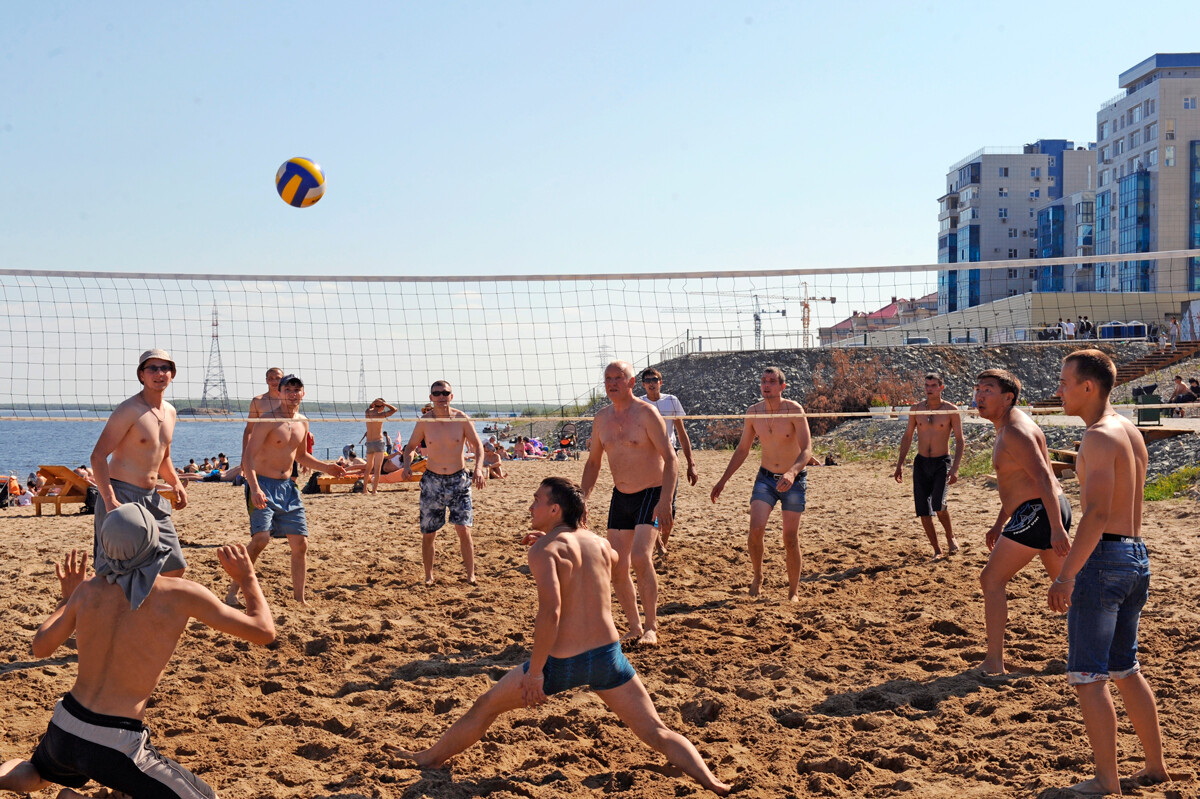 At the beach in Yakutsk.

What is the Yakut language similar to? 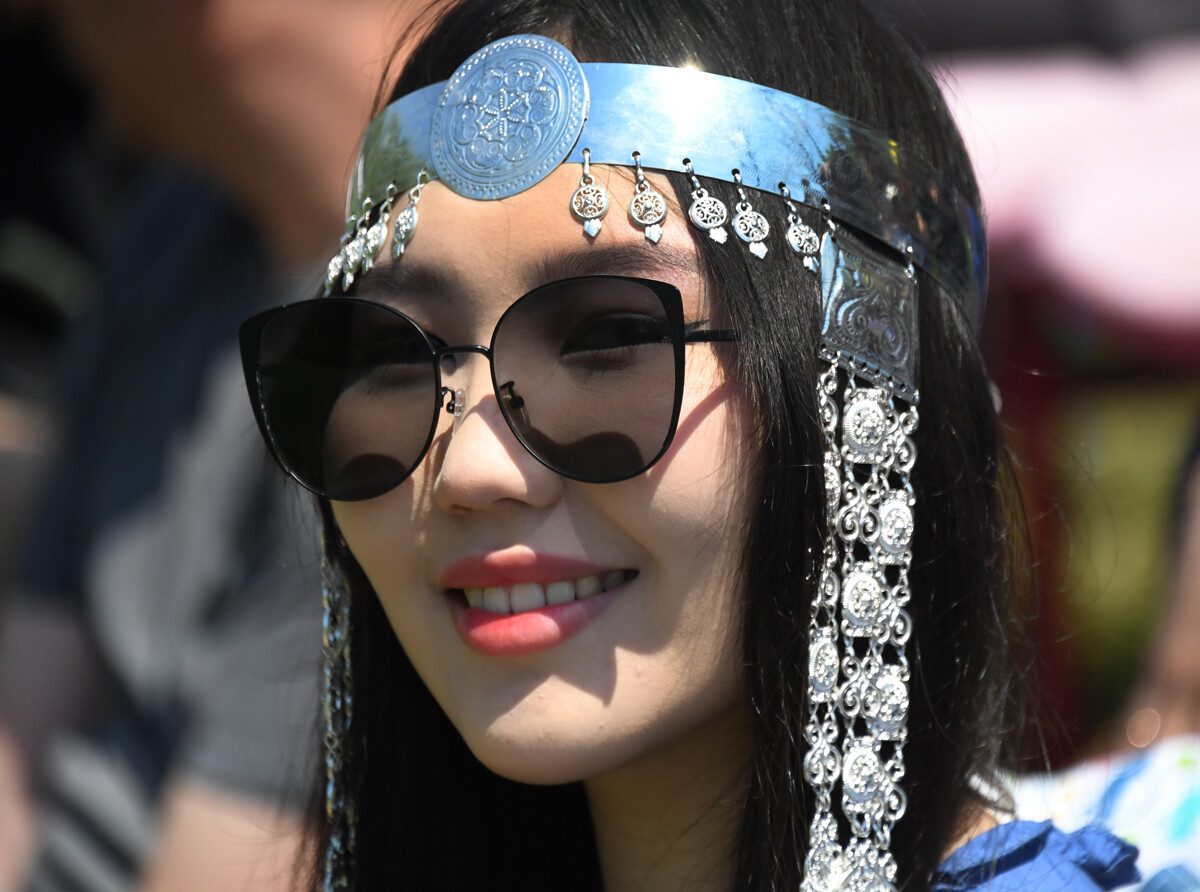 The Yakuts are a Turkic ethnic group and their language, on the one hand, is close to Tatar and Bashkir (“one” in Tatar is “ber” and in Yakut – “biir”) and, on the other hand, has a large number of Paleo-Asiatic language constructions.

In Yakutsk, there are also words close to Russian. For example, the word kastrulya (pot) would be көстүрүүҥкэ (kosturuunke).

The Yakut language is, along with Russian, the official language of the Sakha Republic. It’s used for communication, at workplaces and in the media on par with Russian. Both languages are taught at schools and universities. More than 450 thousand Yakuts speak their native language, i.e., about 90% of all people. But, also, 90% of Yakuts speak Russian and two-thirds of them speak both languages fluently, according to the 2010 All-Russian census.

Another interesting peculiarity of the Yakut language is that despite the remoteness of their settlements, the accents of northern, southern and central Yakuts do not differ very much. For example, the phrase “just for fun” in Yakutsk will sound like “mene”, while, in the north, it will sound like “mele”.

The main literary epic of the Yakuts is called ‘Olonkho’ and consists of long narrated poems (up to 30,000 characters).

How do the Yakuts dress? 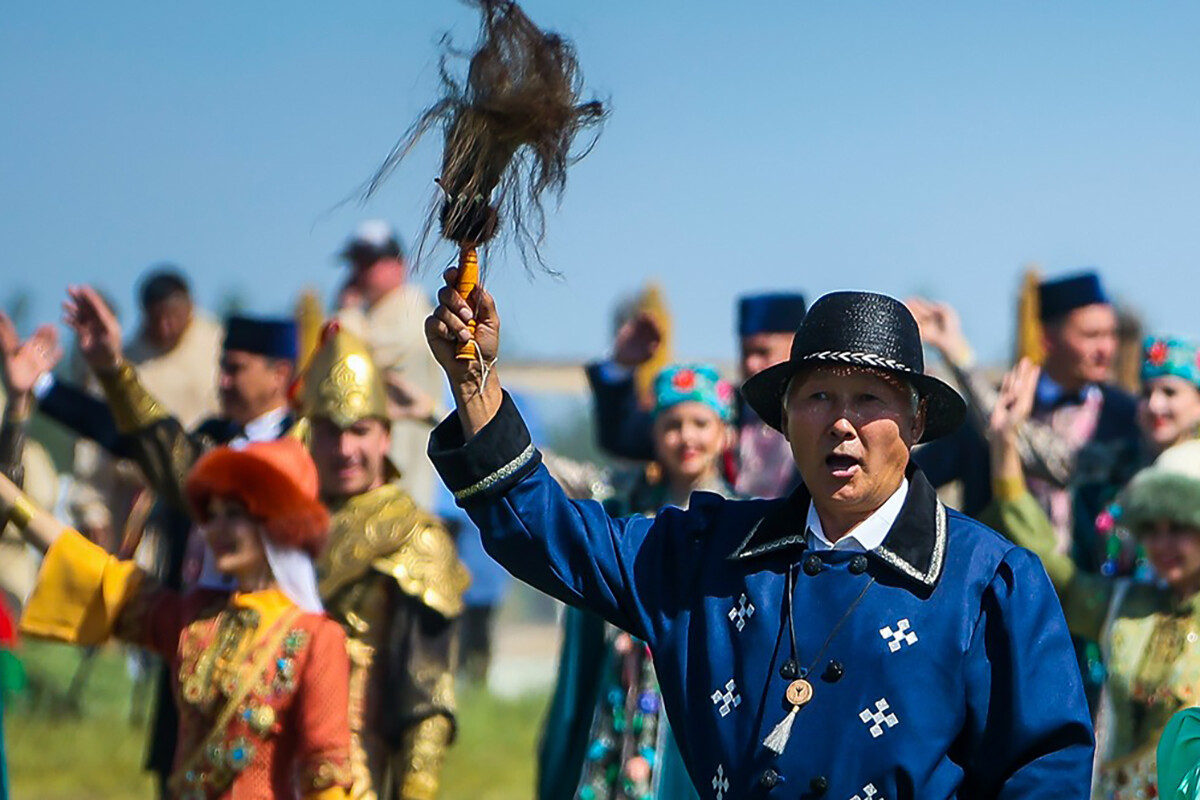 A man with a wooden horsehair tassel.

In summer, men wear shirts with a belt or black caftans, while women wear colorful long dresses made out of satin or silk. Hats made of horsehair protect from the scorching sun. Traditional women’s jewelry is made of silver with different patterns. They include head, back and braid jewelry, earrings, necklaces, wide bracelets and rings. Can you imagine how heavy it is to wear all of it at once? 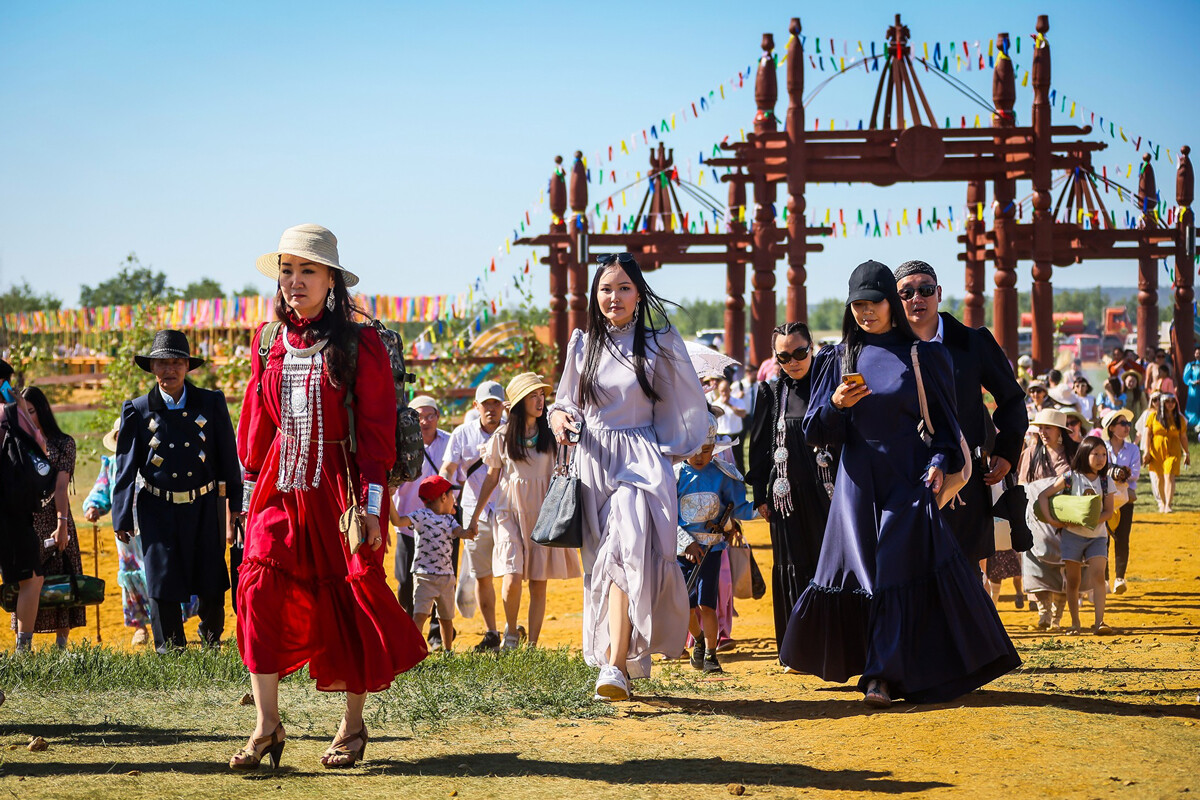 Both men and women also carry an unusual accessory - a wooden horsehair tassel. It can be of different sizes and shapes and its handle is sometimes decorated with silver. The main purpose of this accessory is to drive away mosquitoes, as they are a plague in summer.

Unlike many other indigenous people, many Yakuts have national clothes. However, they wear them very rarely, for the most part, on their main holiday, Yhyakh, which commemorates the day of the summer solstice (you can read all about it here).

What do the Yakuts believe in? 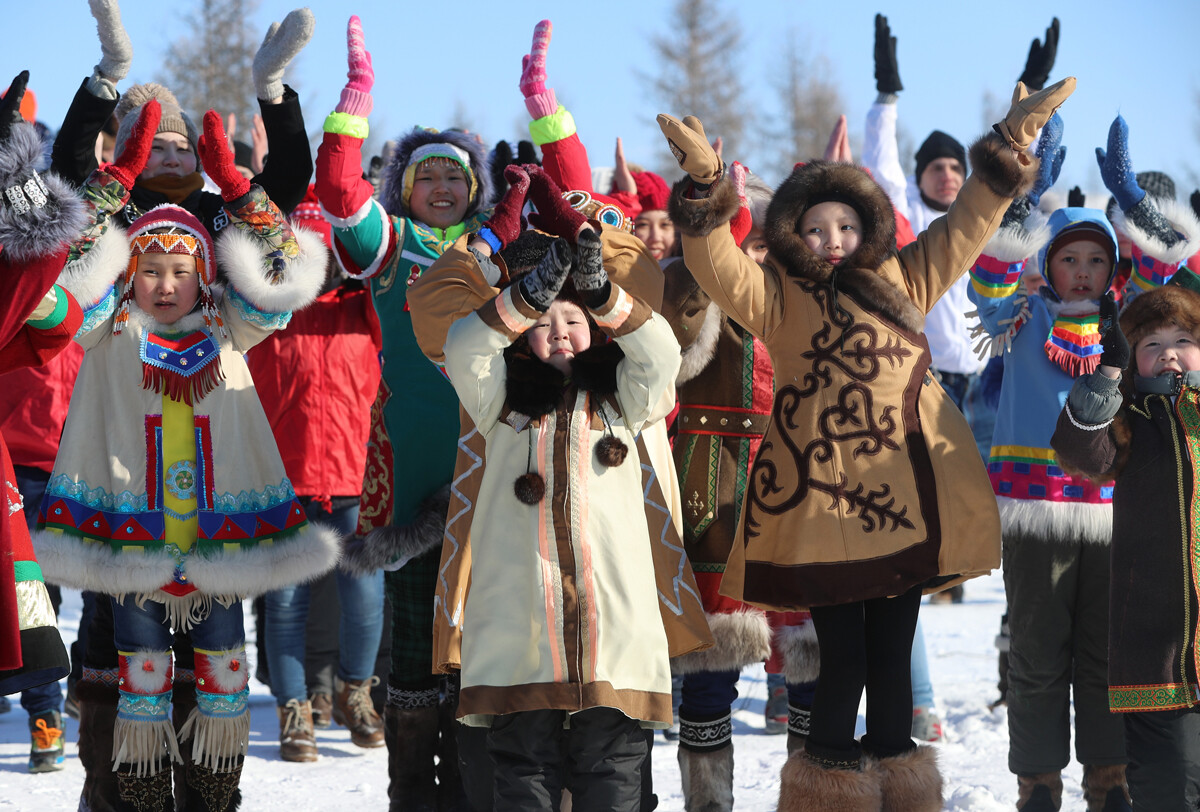 At the Children of Asia International Sports Games.

Modern pagans - this is how to best describe most of the Yakut people. The Yakuts preserved their traditional faith despite countrywide baptism in the 17th century, when Yakutia became part of Russia. Their religion is called Aar Aiy and is registered as one of the official confessions of the republic, along with Orthodox Christianity. According to their belief, the world consists of three parts: the Upper World - where the ancestors of the Yakut Aiy live, the Underworld - where evil spirits live and the Middle World - where people live. This trinity is symbolized by the ‘Great Giant Tree’.

Yakuts believe that Aiy spirits do not accept blood sacrifices and, therefore, make them a present of something delicious, such as baked fritters in their honor and drink koumiss.

Algyschyt (from the word “algys” – “ceremony”) performs rites of purification of evil spirits and is also called a “caster of good forces”. But, not every witch doctor can become a shaman. Yakuts believe that it requires a special talent and one can become a shaman only through great pain. There are only a few shamans in Yakutia and they rarely show themselves in public.

Even orthodox Yakuts of whom there are more than 40 percent, honor the traditional beliefs.

How many names do Yakuts have? 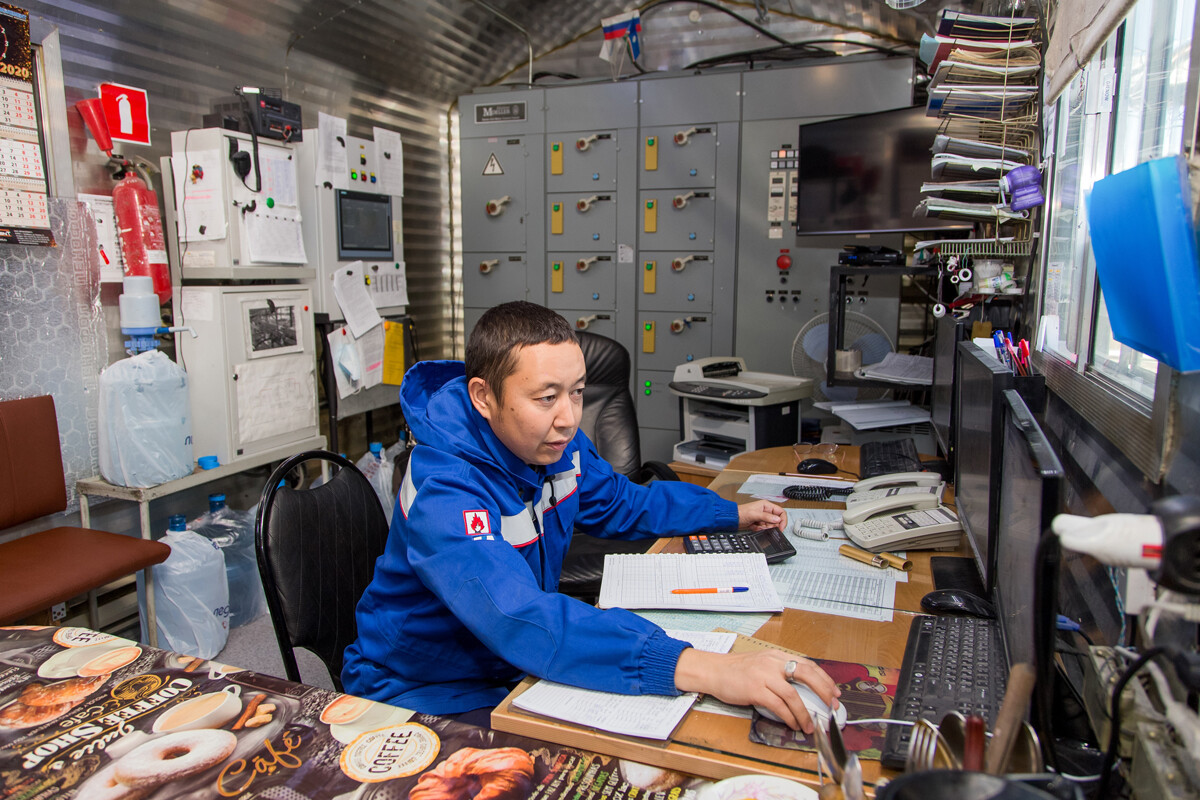 An employee of Sakhatransneftegaz in Yakutsk.

Yakuts have all kinds of names. There are the usual Russian names like Evgeny, Mikhail, Natalia and Anna. But, of course, there are plenty of traditional Yakut names like Sardaana, Aisen and Arylhai.

Yakuts also often have Latin names: for example, Rosalia or Diana. It also happens that they have a Russian or Latin name in their passport, but, among themselves, are “yakutized". For example, Diana is Dayaana, Maria is Maarya, Fyodor is Syoder, etc.

What do the Yakuts eat? 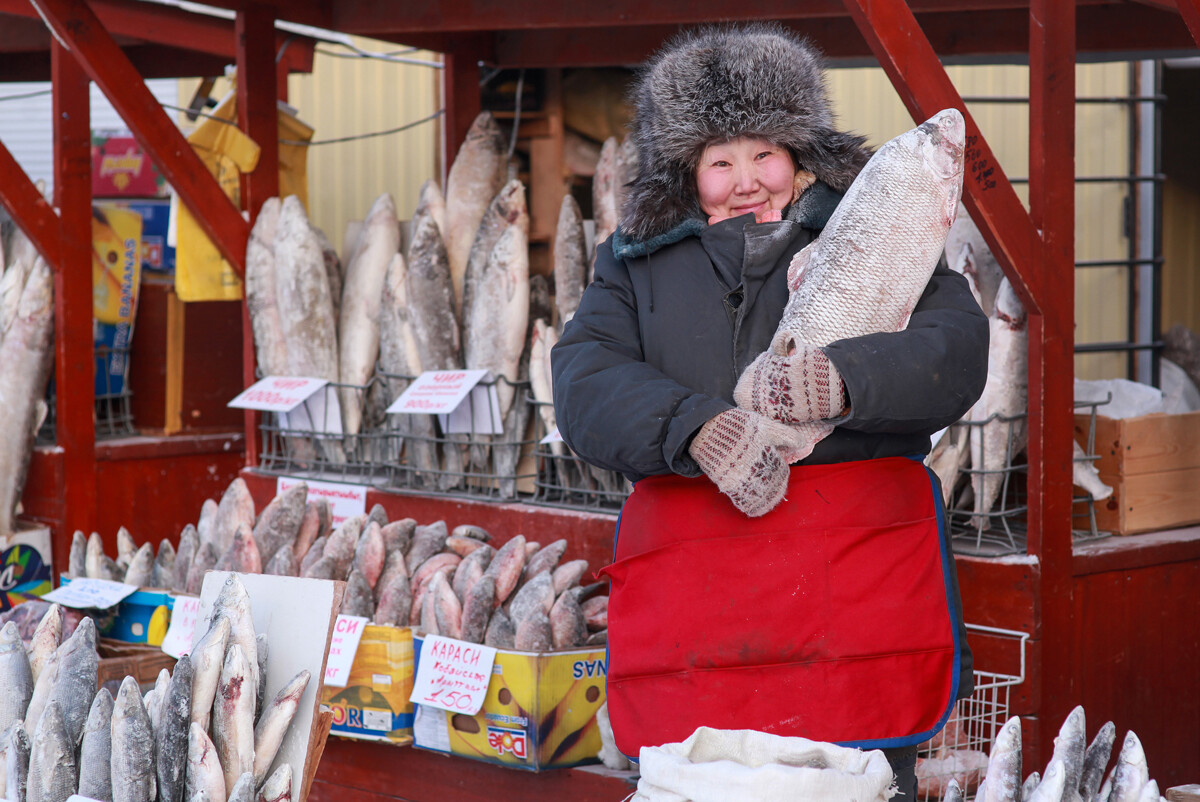 A market in Yakutsk, where they sell fish. It's about minus 30 C outside.

The Yakut national food is meat, fish and milk. In general, food is supposed to help you survive in harsh Yakutian conditions. Speaking of meat, foal (young horse meat) is popular. The locals themselves explain that this is because, in the old days, many foals simply could not survive the winter. Meat and by-products are also used to make sausages.

Fresh and frozen fish is usually prepared by being sliced up or fried. Since there are a lot of rivers and lakes here, there are plenty of different types of fish: teal, omul, muksun.
Cow and mare milk-based drinks are very popular, too.

What you won’t find in the Yakut cuisine are fruits and vegetables, as they practically don’t grow there. So, the main dessert is whipped cream with frozen berries or jam!