Which cities in the world share latitudes with Russia? (INFOGRAPHICS) 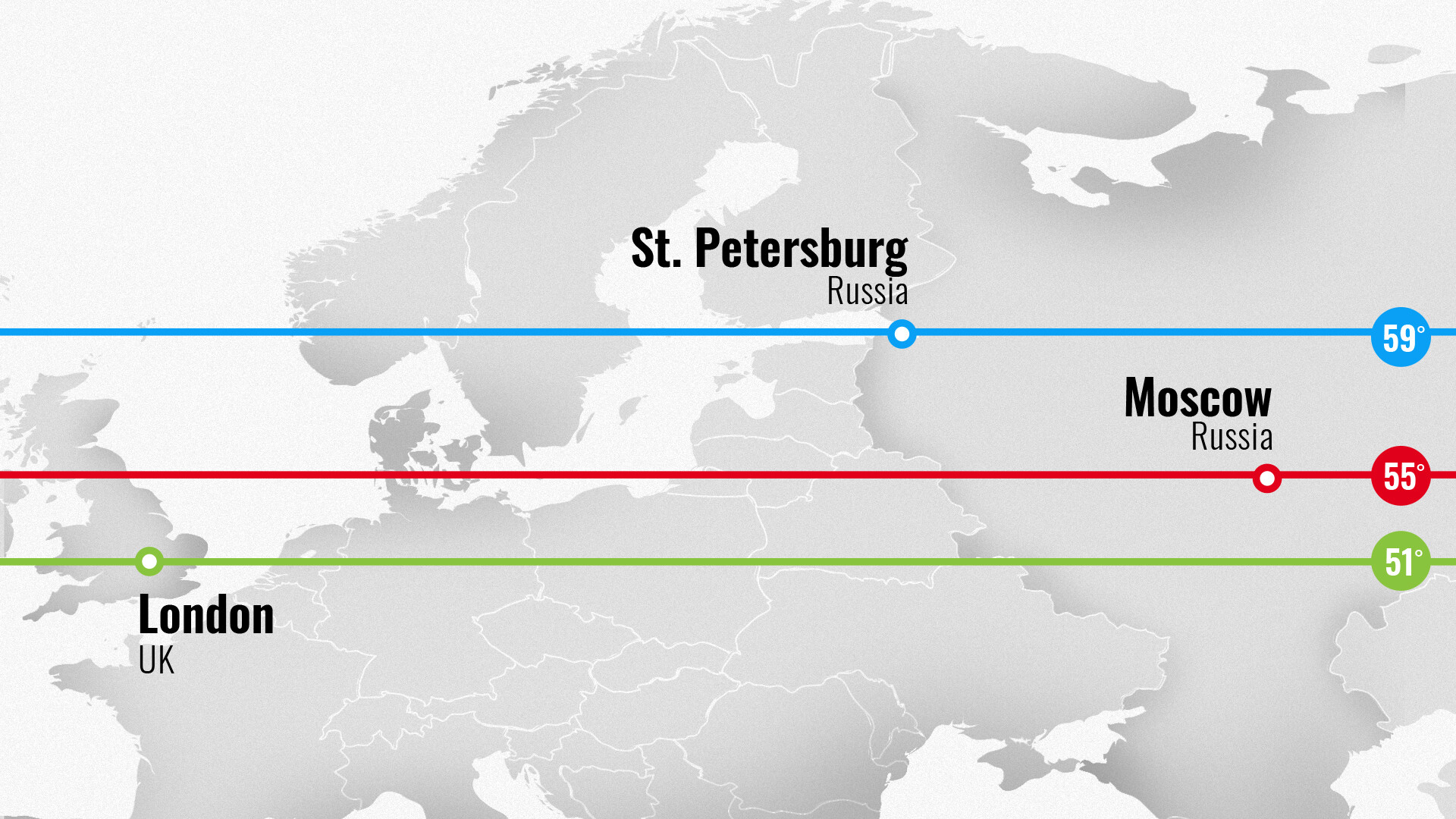 Natalya Nosova
Geographically, Russia is located between the 41 and 81 parallels of northern latitude. Do you know which major cities in the world are further south or further north than, for example, Moscow?

Let’s start from the south and move north. So, the southernmost point of Russia, in the Republic of Dagestan, is located on the 41st parallel of northern latitude, the same as Rome (Italy), Chicago (U.S.), Barcelona (Spain) and Istanbul (Turkey). At the same time the southernmost city of Russia, Derbent, on the 42rd parallel. 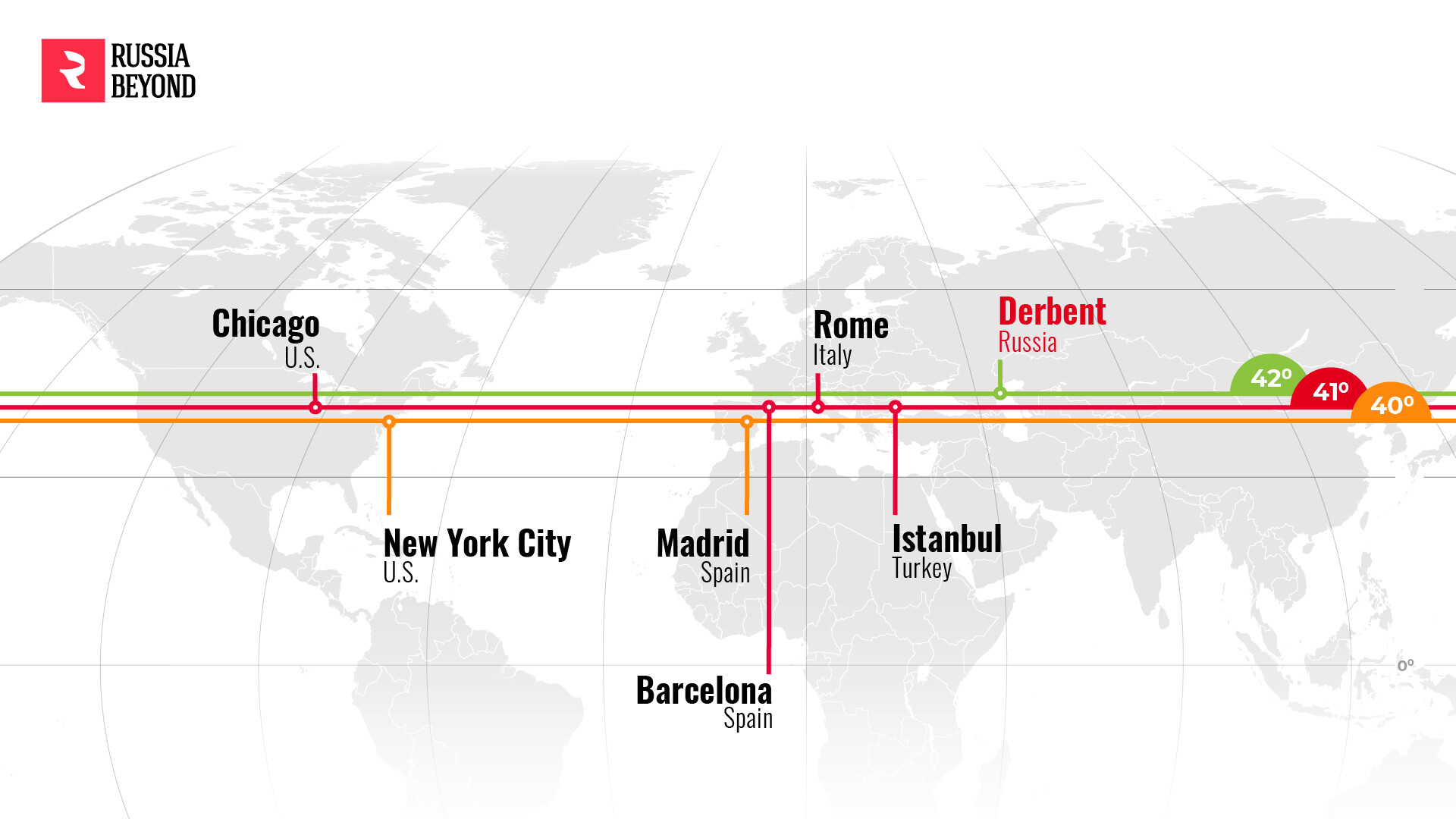 Just to compare, New York City (U.S.) turned out to be further south than the whole of Russia - it is on the 40th parallel, as well as Madrid (Spain). And Beijing (China), Philadelphia (U.S.) are, for example, on the 39th parallel, while San Francisco (U.S.) is on the 37th and Tokyo (Japan) on the 35th. 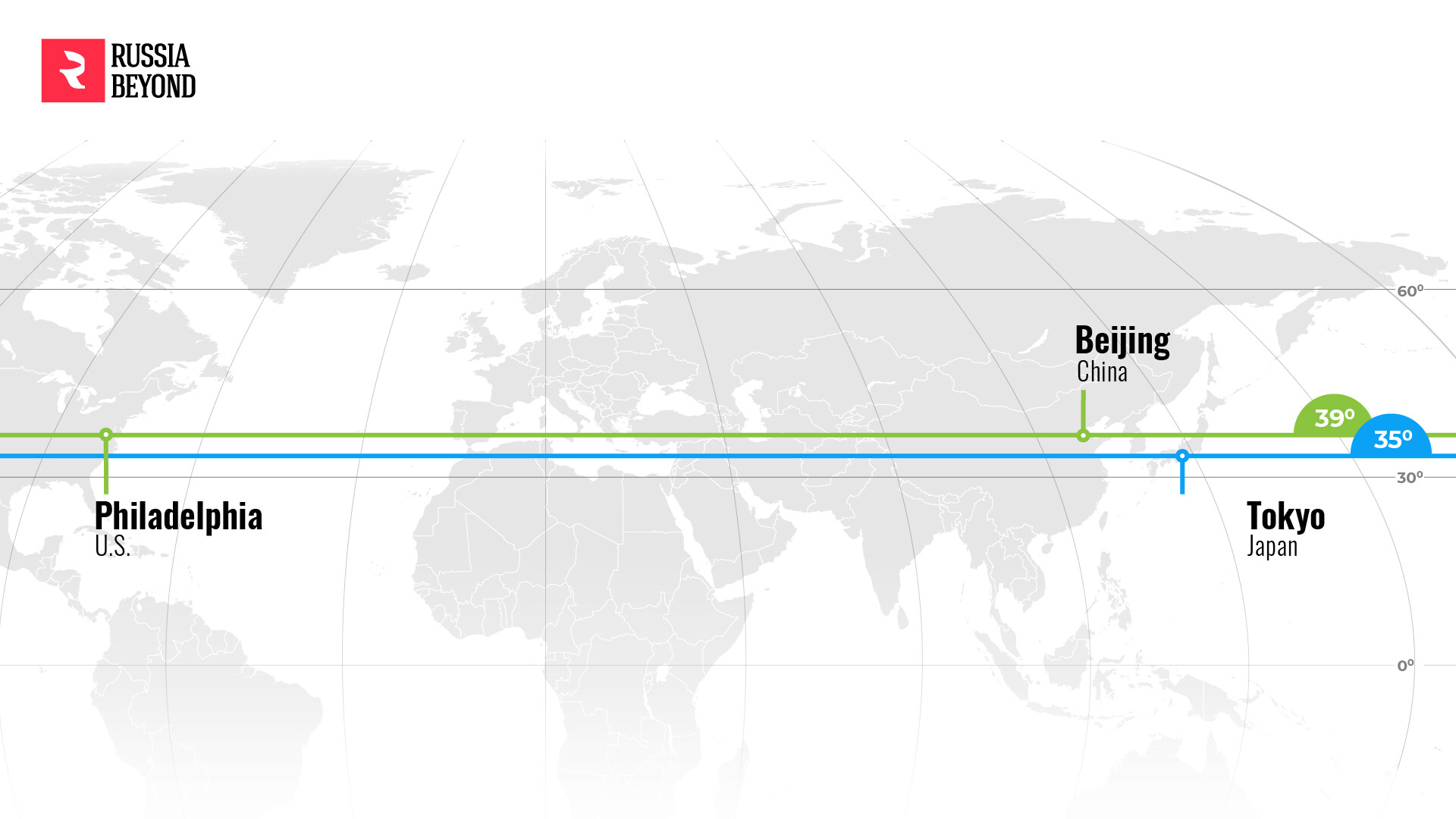 The so-called Russian south is situated in the 43-45 latitudes: Sochi, Grozny, Vladikavkaz (as well as Vladivostok in the Far East) are on the same 43 latitude as Florence, Tuscany and Siena (Italy), as well as Alma-Ata (Kazakhstan), Varna (Bulgaria) and the city of Sapporo on Hokkaido Island (Japan). 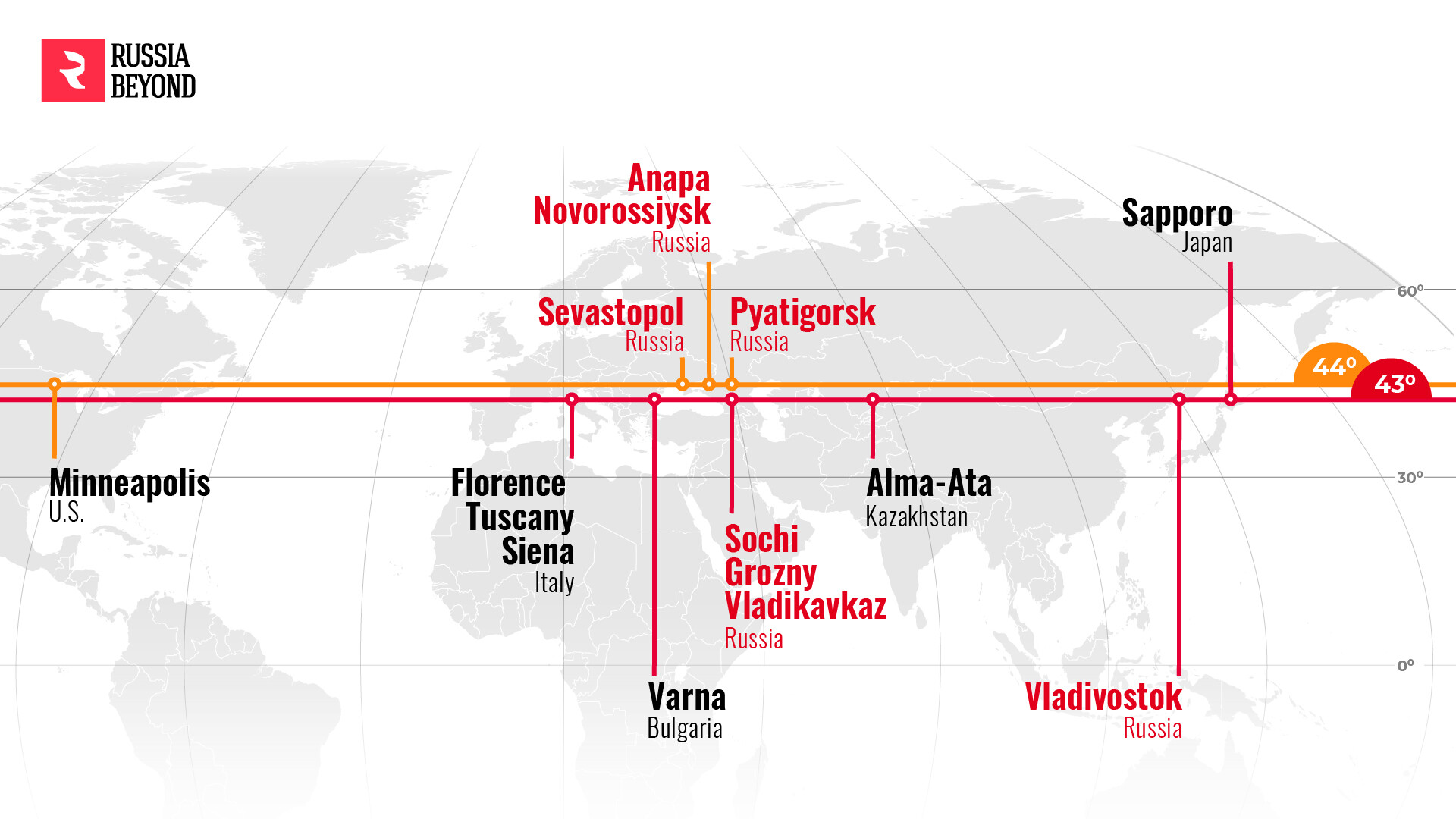 The Black Sea resorts of Sevastopol, Anapa, Novorossiysk, as well as the Caucasian city of Pyatigorsk are located on the 44th parallel. In the United States, the fairly northern city of Minneapolis is on the same latitude. Krasnodar, another city in Southern Russia, can be found on the same 45th latitude as Canada’s Montreal and Ottawa. 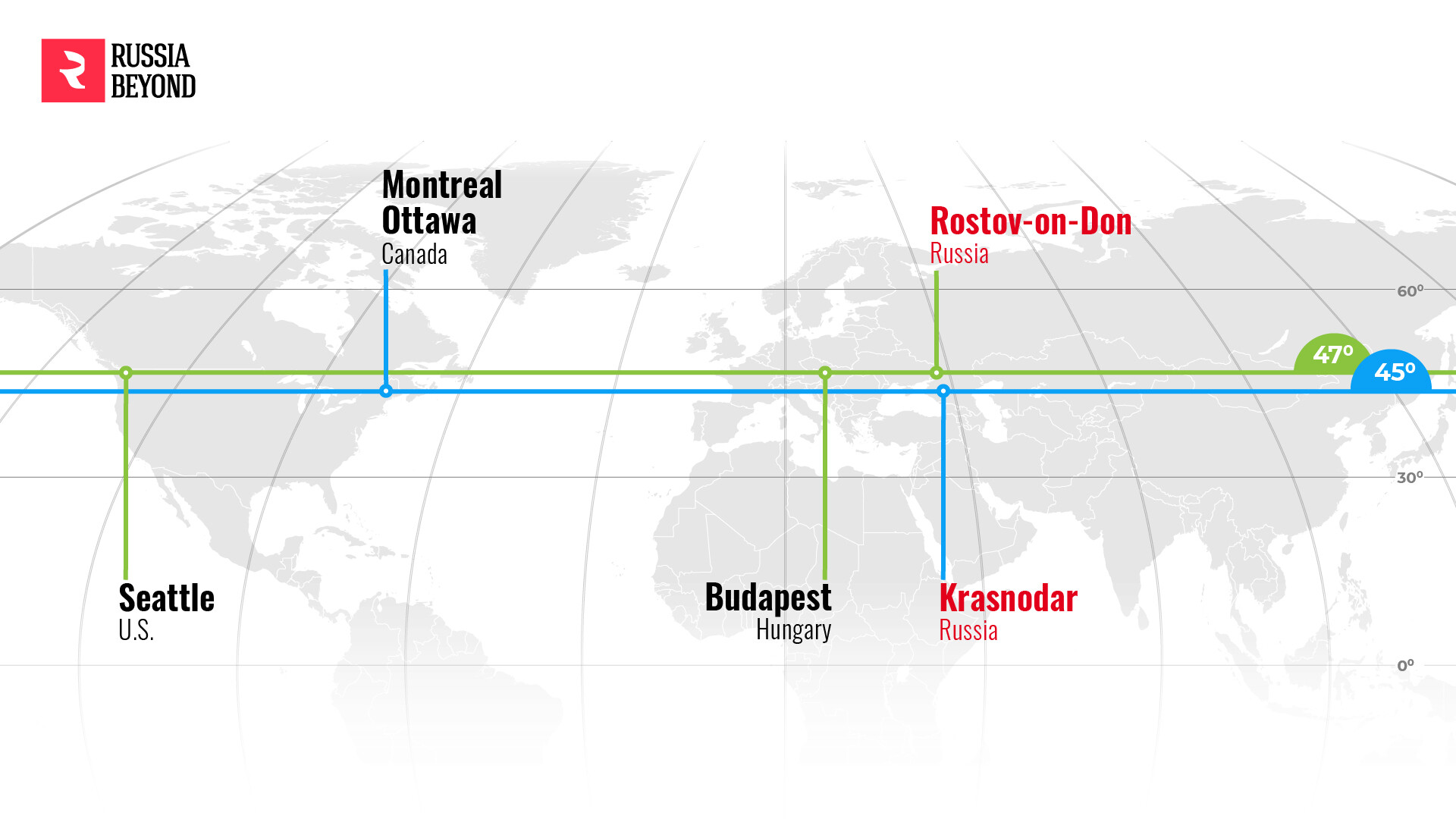 Interestingly, the northernmost point of the United States (not including Alaska) is on the 49th parallel. That is, the rest of Russia is much further north. Komsomolsk-on-Amur, Belgorod and Blagoveshchensk stretch along the 50th latitude, along with Brussels (Belgium). 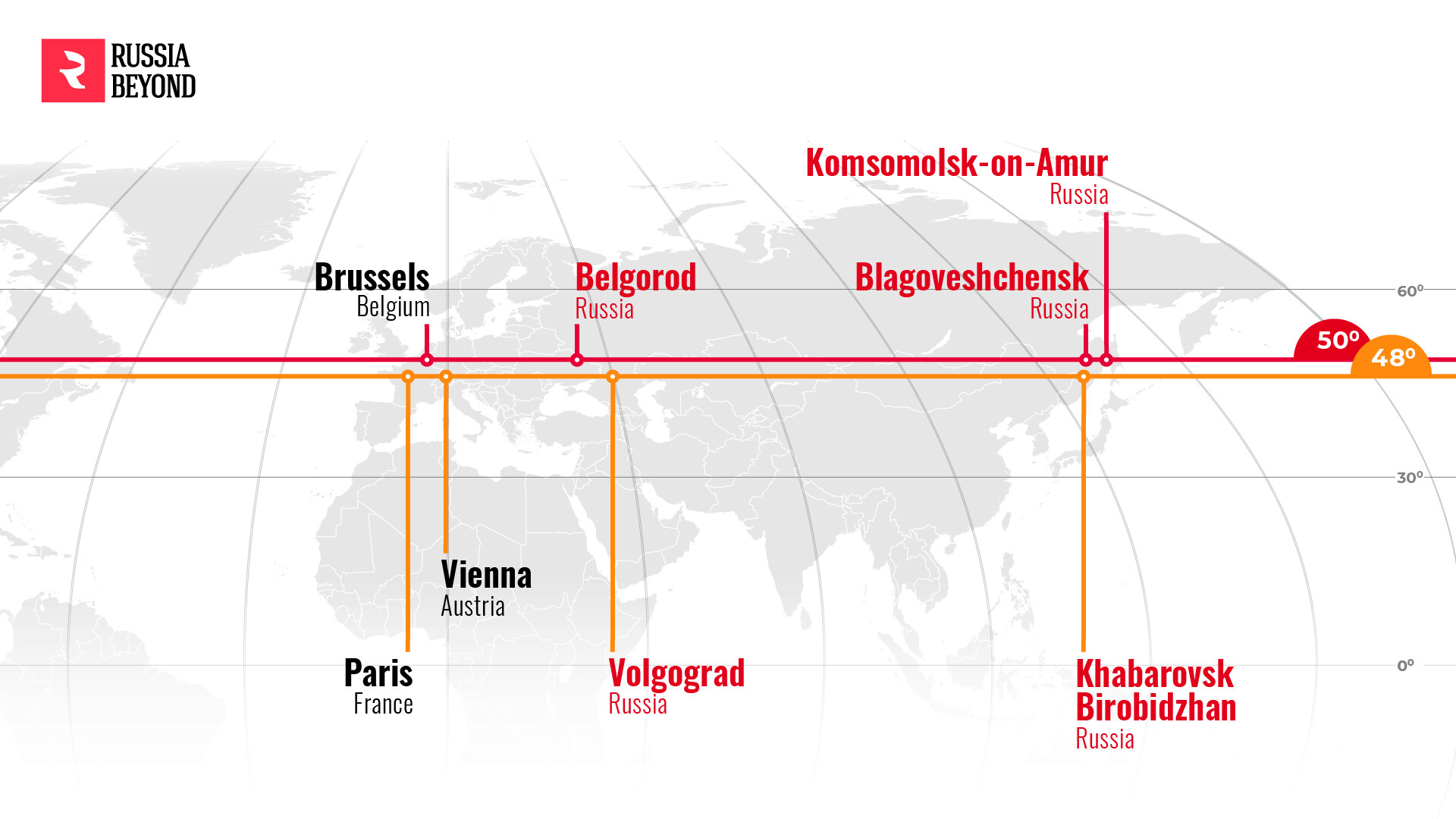 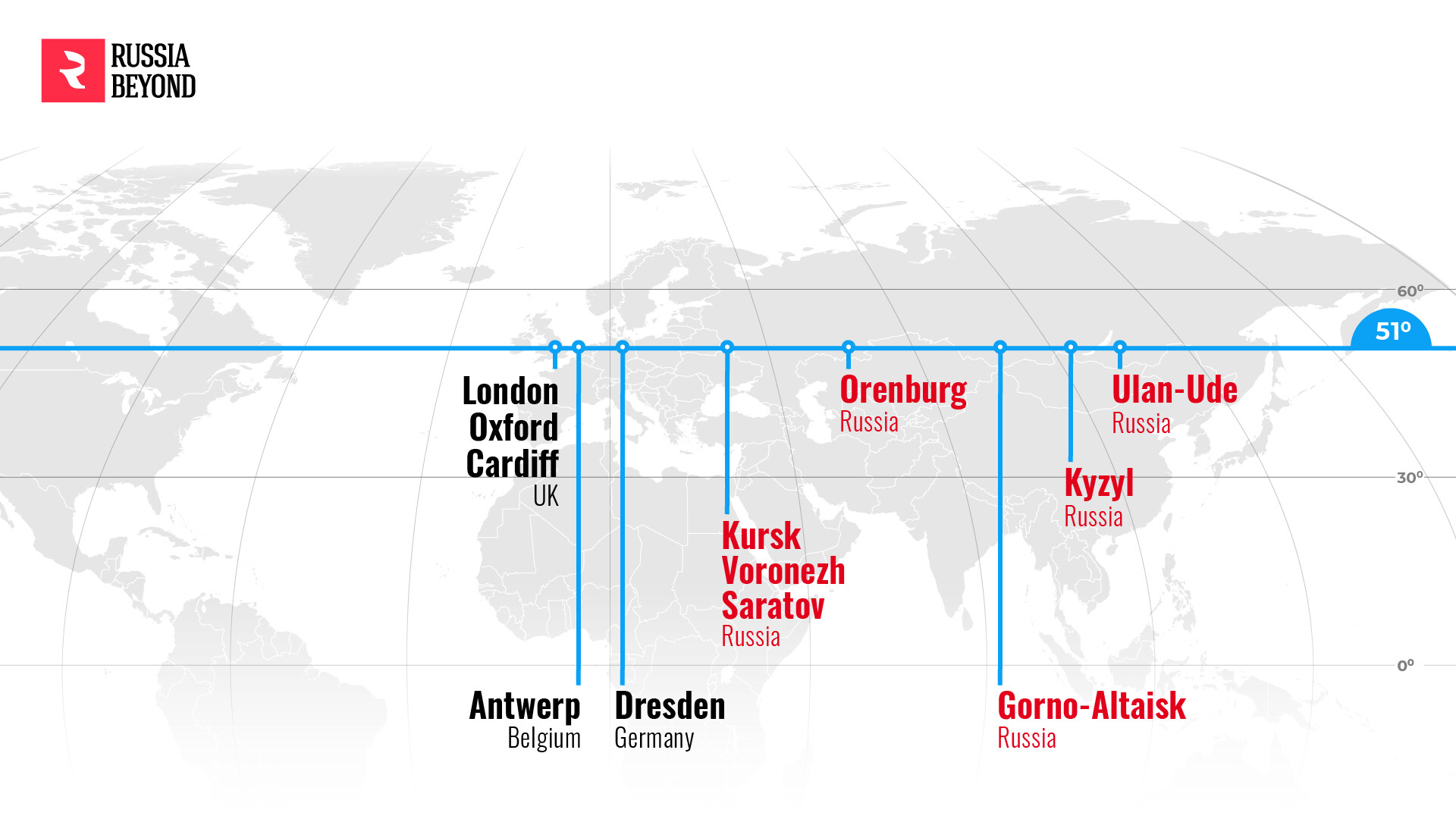 Moscow is the world’s northernmost urban agglomeration with a population of more than 10 million. And it is located on the 55th parallel of northern latitude. Among large Russian cities, Kazan, Chelyabinsk and Novosibirsk also share this latitude, as well as such cities around the world as Copenhagen (Denmark), Glasgow and Edinburgh (Scotland), Klaipeda (Lithuania) and Thompson (Canada). 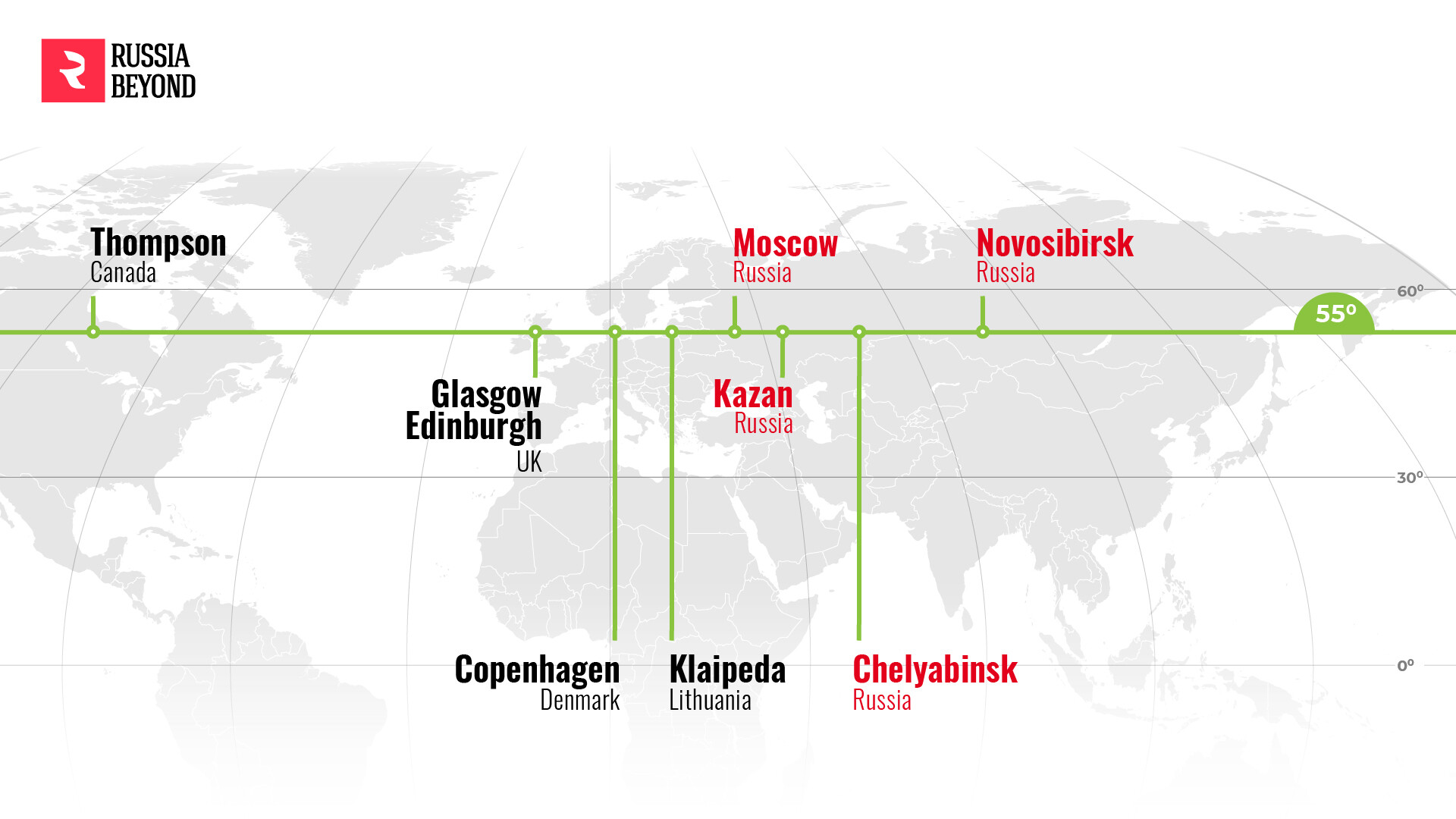 Veliky Novgorod, Tobolsk and Perm are situated on the 58th latitude, as is Alaska’s capital, Juneau.

St. Petersburg is on the same 59th latitude as Stockholm (Sweden), Oslo (Norway) and Tallinn (Estonia). Russian cities, such as Vologda and Magadan, are on the same latitude. Nizhnevartovsk, Veliky Ustyug share the 60th latitude with Helsinki (Finland), while Arkhangelsk and Reykjavik (Iceland) are situated on the same 64th latitude. 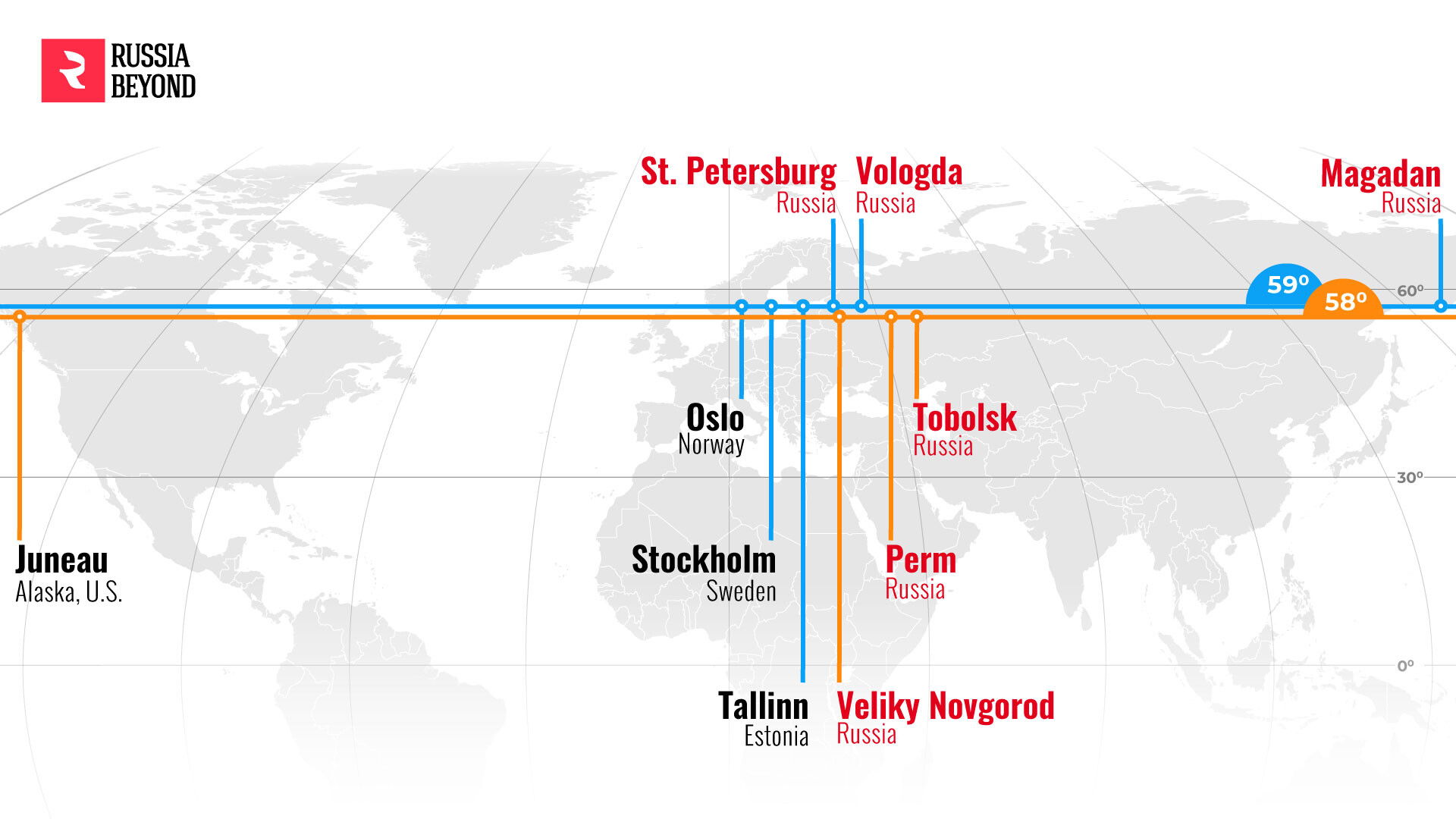 The further north, the more interesting it gets! All of Russia is crossed by the 66th parallel, i.e. the Arctic circle. The only city in the world, which is located directly on the Arctic Circle, is Russia’s Salekhard. In the United States, the 66th parallel passes through Alaska (e.g. Lake Selavik), crosses the Arctic Circle and all of Canada, as well as the northern Swedish region of Norrbotten, Grimsey Island in Iceland and Vikingen Island in Norway. In addition, the Northern Polar Circle crosses the runway at Finland’s Rovaniemi Airport. 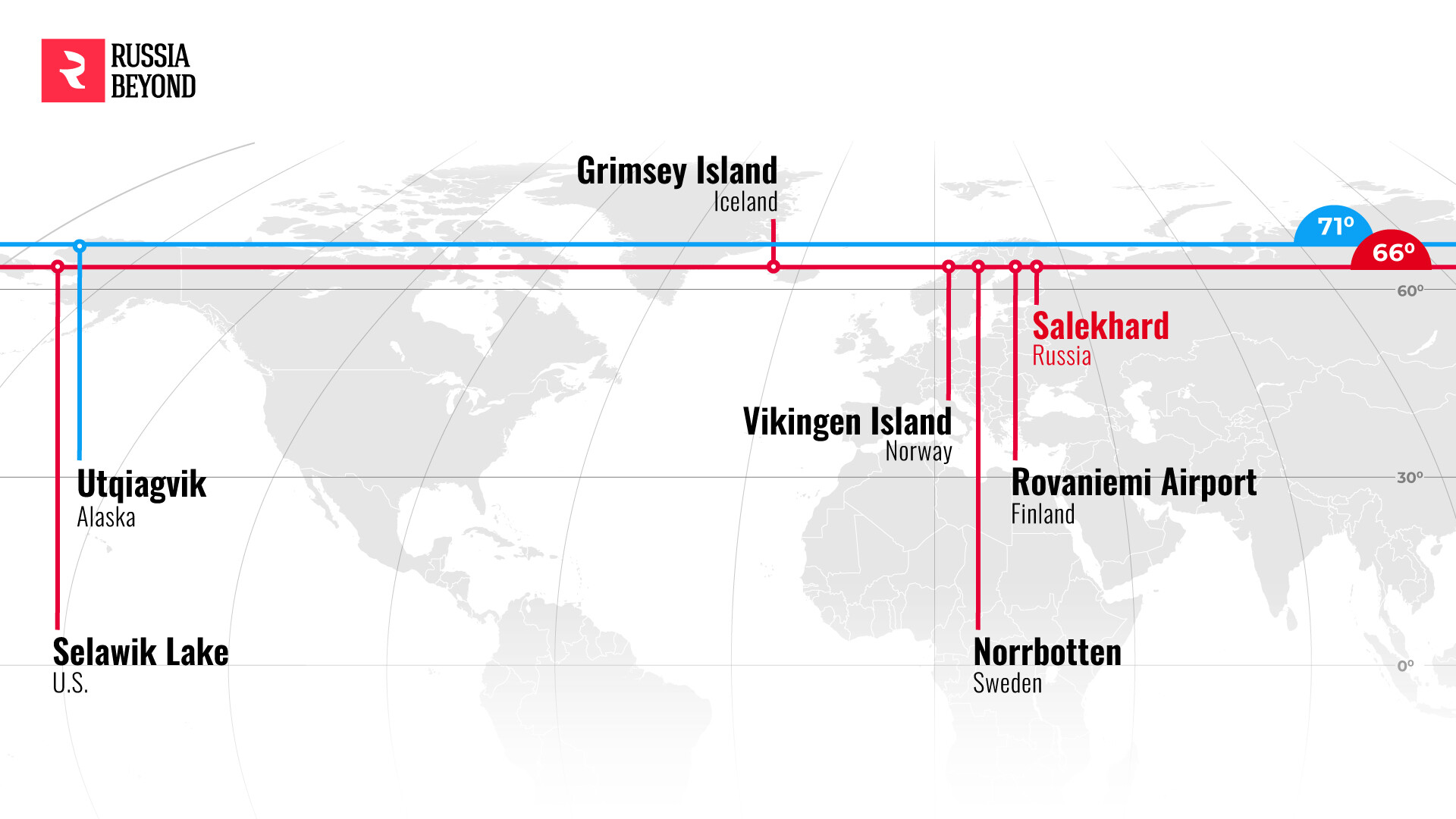 The world’s largest city situated above the Arctic Circle is Russia’s Murmansk, located on the 68th parallel. But the northernmost cities of Russia - Norilsk and Chukotka Pevek are located on the 69th parallel, as well as Norwegian Tromsø. 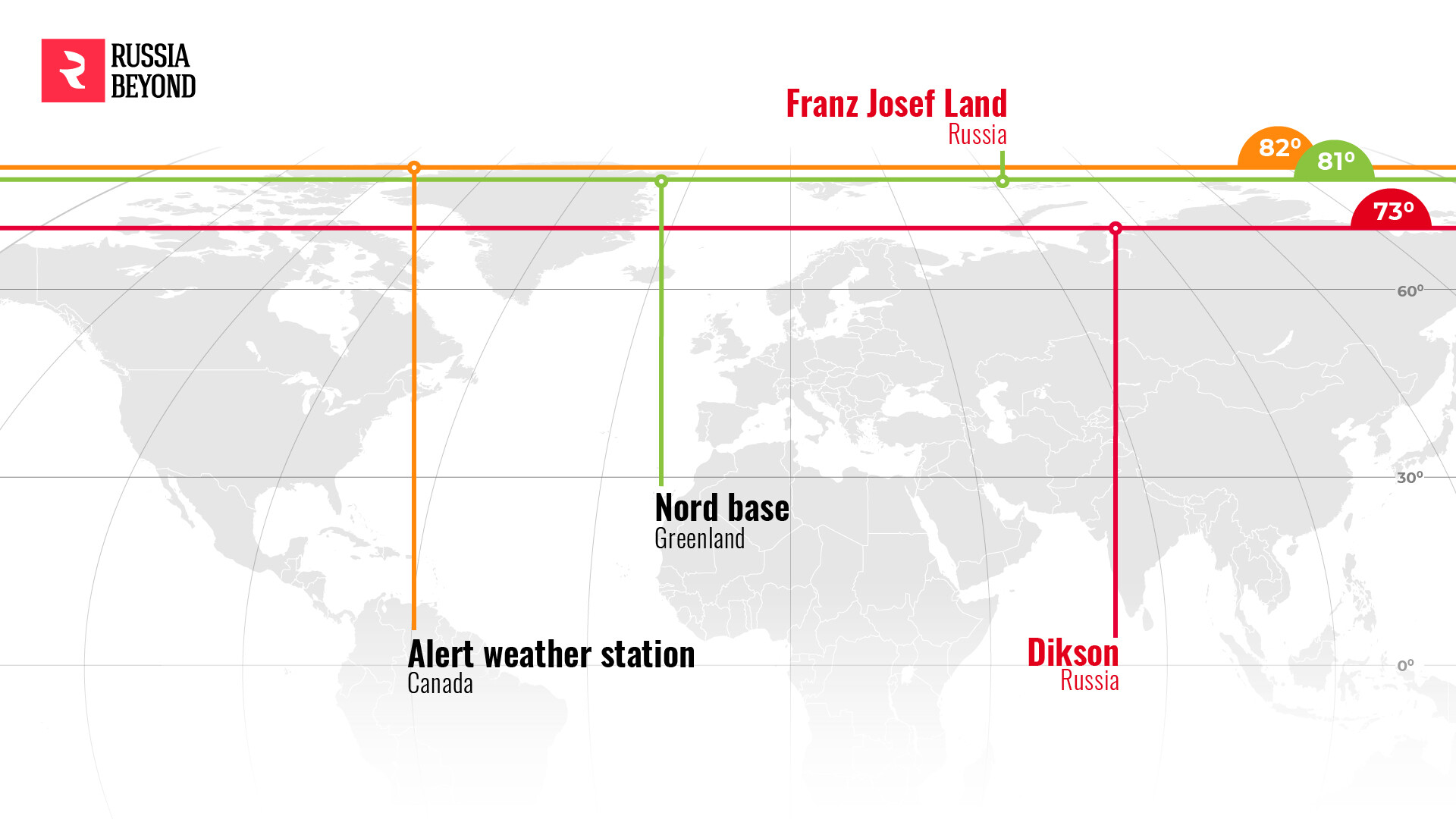 The northernmost point of Russia is on the Franz Josef Land archipelago in the Arctic (the 81st latitude), on the same parallel, there is a military base Nord in Greenland (Denmark). And Canada with its military base and weather station Alert on Ellesmere Island wins - the 82nd parallel, further only is the North Pole!