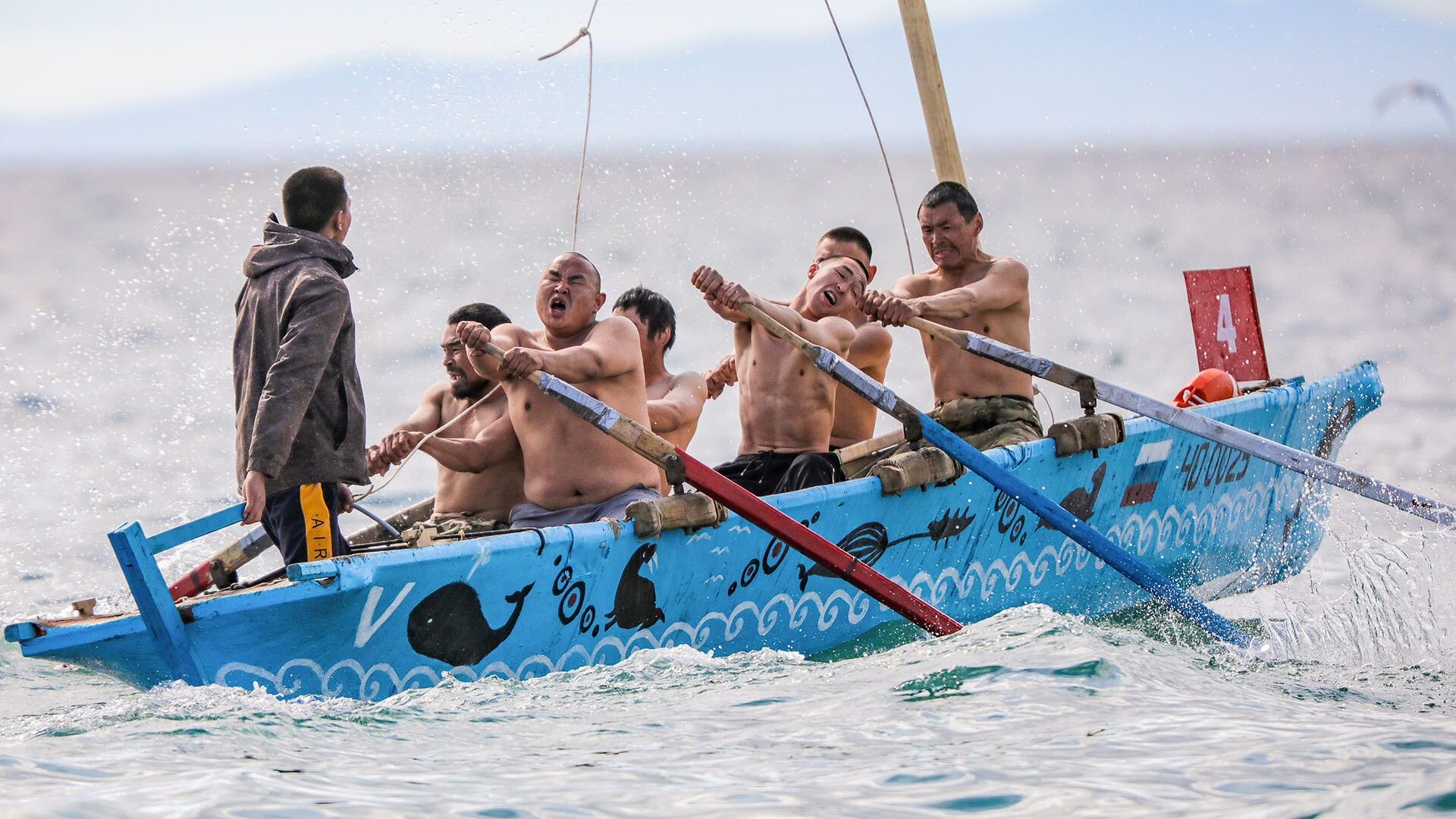 A regatta on traditional boats in Lorino.

Vyacheslav Viktorov/Roskongress
Living in the tundra is a daily struggle, but for some people, it's the only life that has any meaning. What's life like for the indigenous peoples of Chukotka?

Far, far away, at the very edge of Russia, where a new day dawns in the vast tundra, is where the Chukchi people live. They call themselves “real people” or, in their language, luoravetlans. Life in Chukotka is harsh, but it really is a true way of living. “Tundra” Chukchi are nomadic reindeer herders, while the “coastal” Chukchi are sea hunters. There are about 16,000 of them in total, with the majority living on the Chukchi Peninsula. Many of them, like 100, 200, and even 300 years ago, are still engaged in the traditional crafts of their people.

Their professions and their way of life may seem archaic, but their lives are not at all isolated from the outside world. They use smartphones, laptops and bank cards. 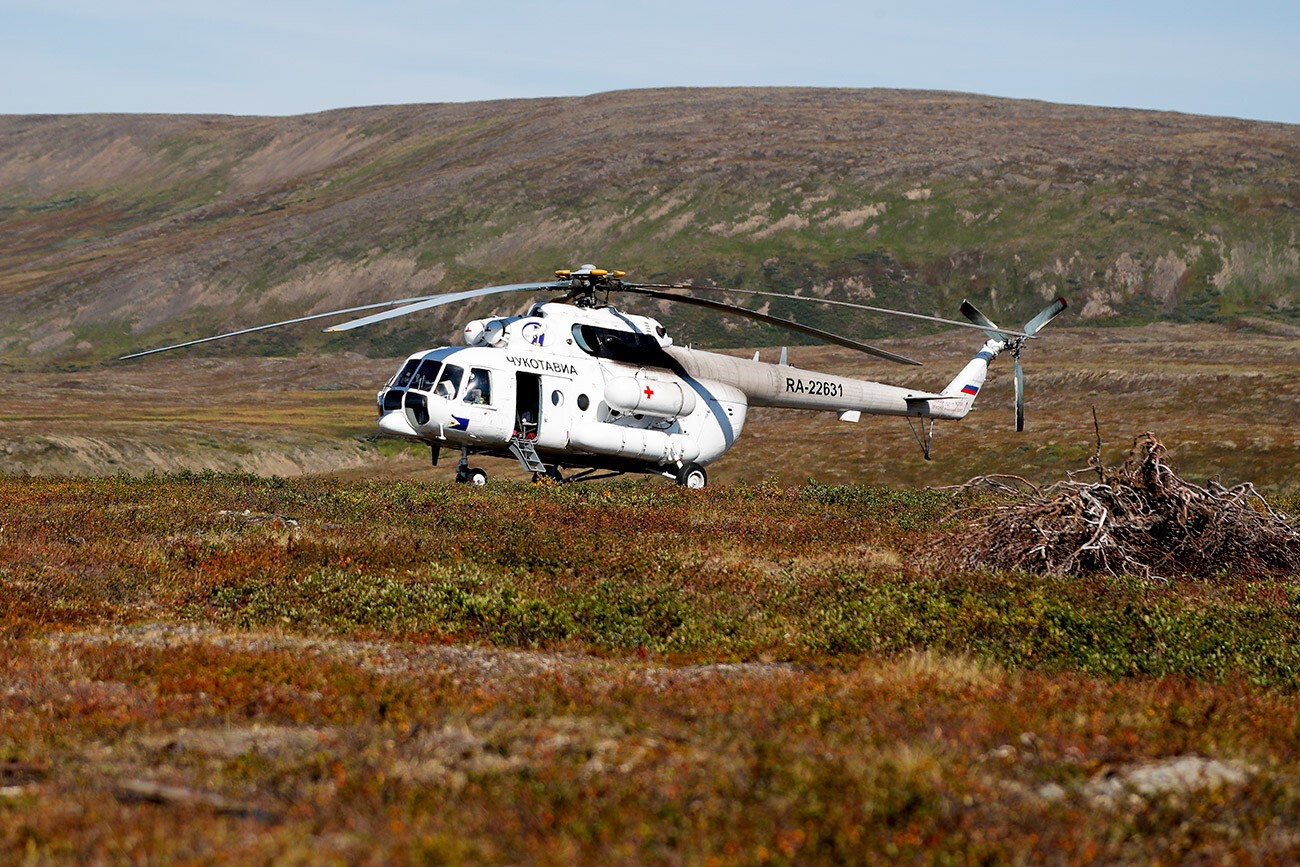 Chukotavia helicopter in the tundra.

Our helicopter circles for a long while over the tundra in search of the Chukchi encampment. It’s not easy to find them. Modern nomads are split into brigades; each of them, changing location, informs the heads of the reindeer-herding enterprises of their route. 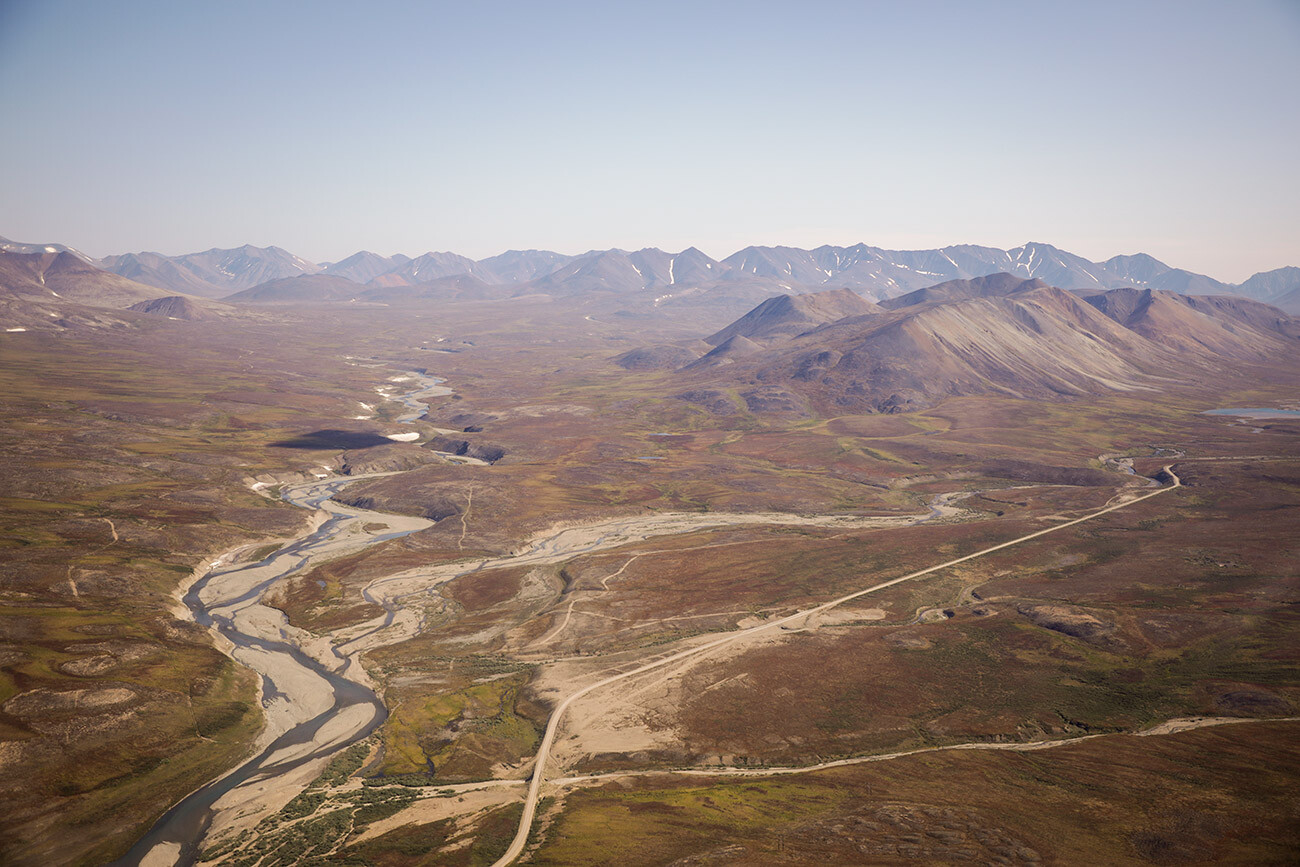 But there is a problem, the pilots say: the reindeer herders have their own names for rivers and hills that don’t match the maps. You could fly over the tundra for several hours and see neither man nor animal. 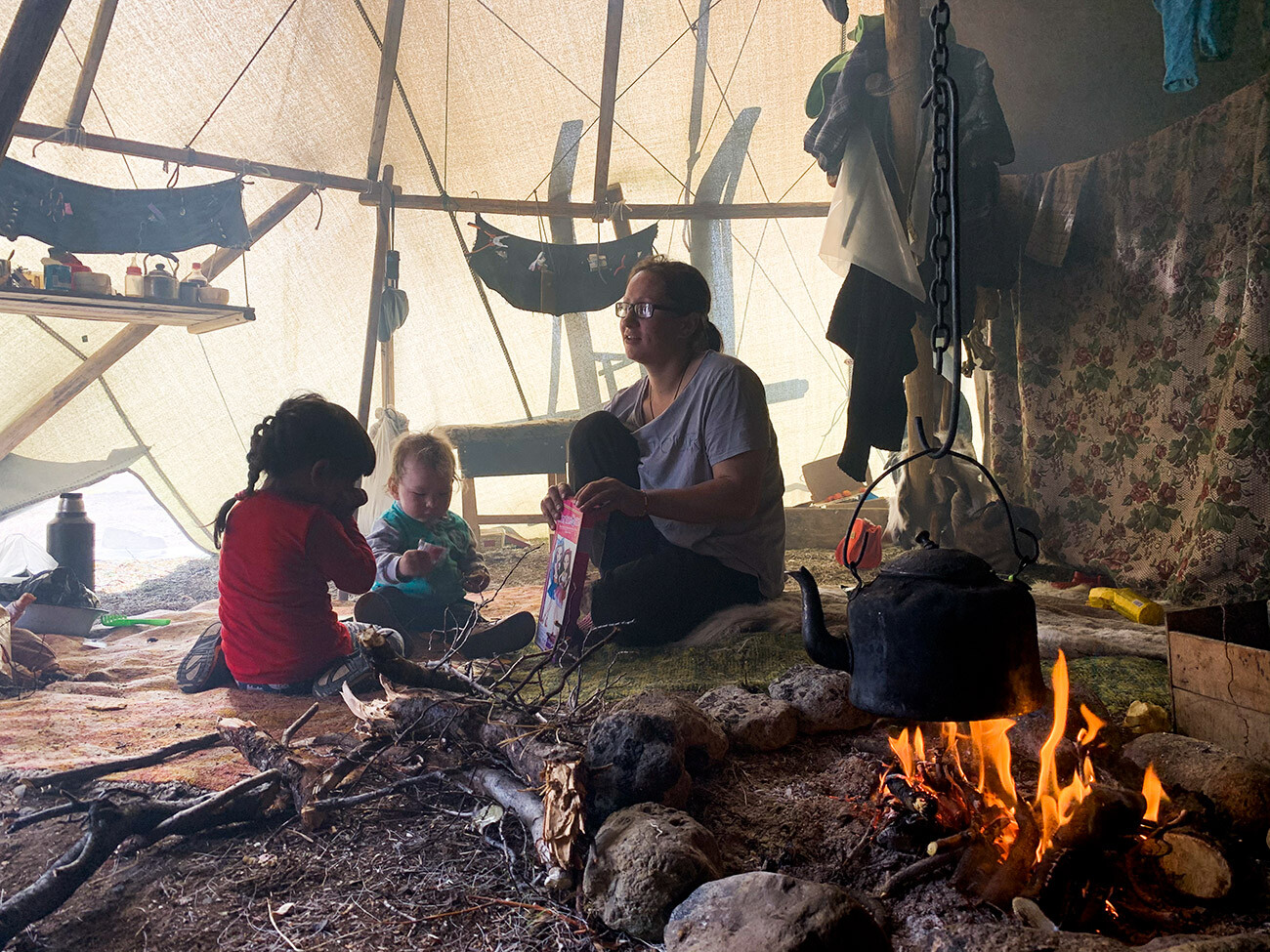 Valeria and her kids.

At last, we see a valley with a handful of yarangas – traditional Chukchi homes – and kids run out joyfully to meet us. This is Brigade No. 3’s encampment. Helicopters rarely land here, since it’s just 70 kilometers away from the settlement of Egvekinot. Quite close. And guests are always welcome. There are three families in the brigade. The men have gone to the tundra to let reindeer graze and only women, kids and elderly men have remained in the encampment. 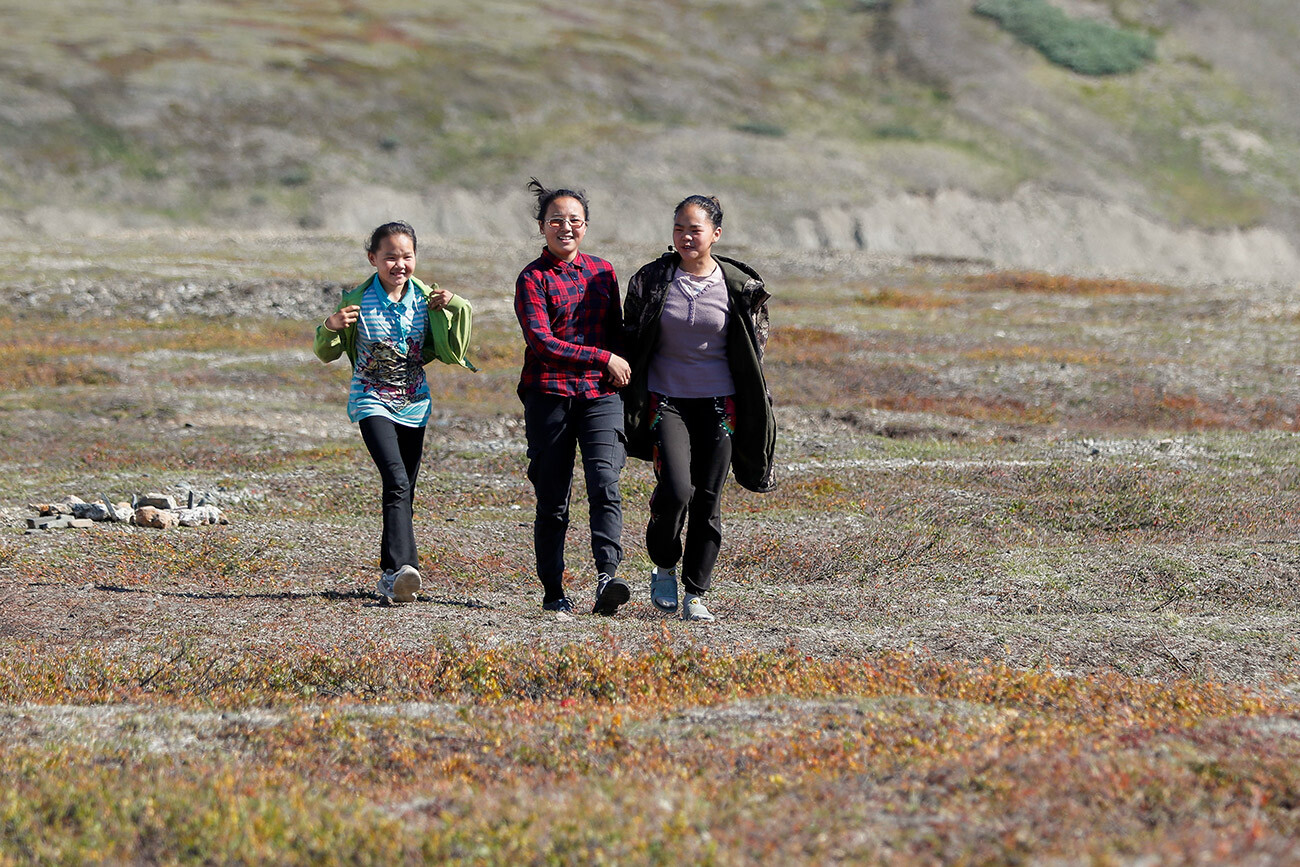 Teens greating guests from the "mainland".

Valeria is Russian; she used to live in Egvekinot but met her future husband from a reindeer herding family and decided to move to the tundra. At 29, she is raising two kids, Valya (about five years old) and Kirill (about one year old). Such families are not unusual around here. “Times when women gave birth in yarangas are long gone,” Valeria says. “My husband told me that, before, the helicopters brought everything. Now we have our own ATV and go to the village to buy groceries and fuel. When our kids grow up, we’ll be driving them to school ourselves.” 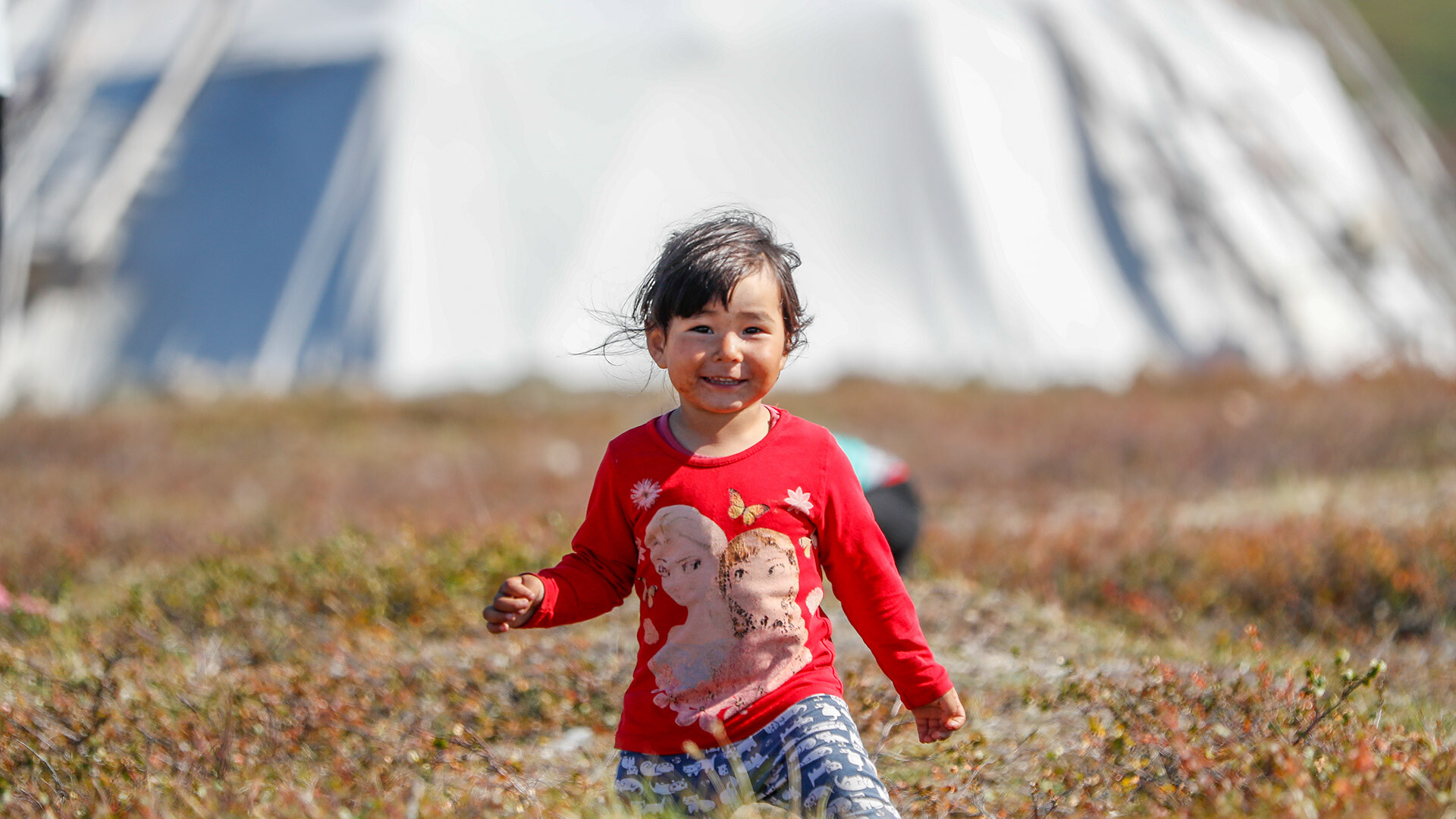 They have a large yaranga, in the center of which is a hearth with a steaming kettle. Fish is being smoked over the fire. Soft deer pelts cover the floor; the sleeping room is separated from the rest with a thick curtain. Cord extenders with outlets litter the floor: they still have to charge their phones and other appliances. There’s no signal in the valley – you have to climb a hill to make a call. Kids have toy cars and dolls, but they like going out best. 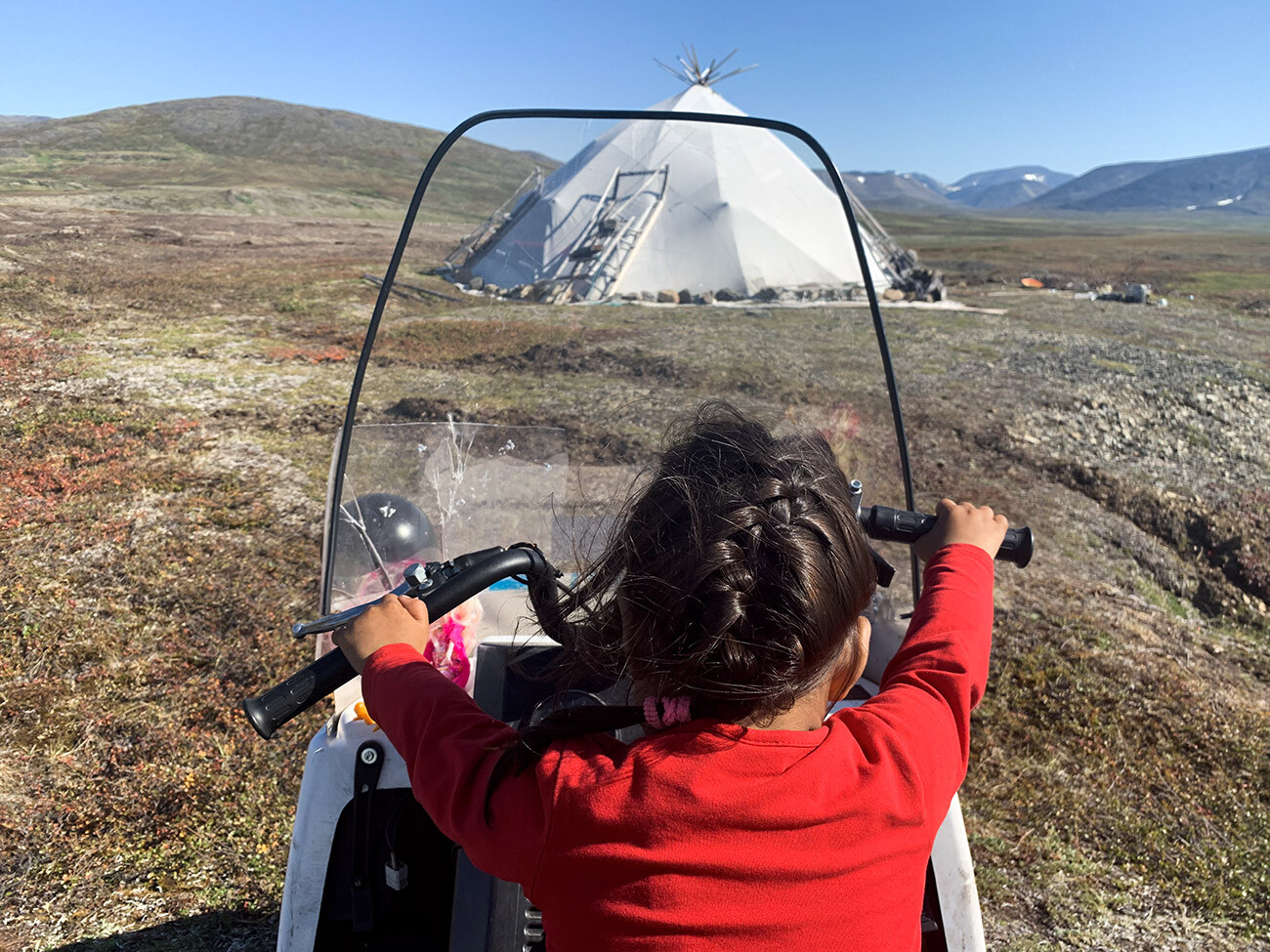 “Let’s go to the Buran [Snowstorm],” Valya pulls me by the hand. “Let’s go ride in the tundra.” Of course, it’s too early for her to really ride a snowmobile, so she takes her doll along and pretends to race across Chukotka. She still has a couple of years left before school, but Valya already says she’ll be coming back and helping her mom.

Retiring in the tundra 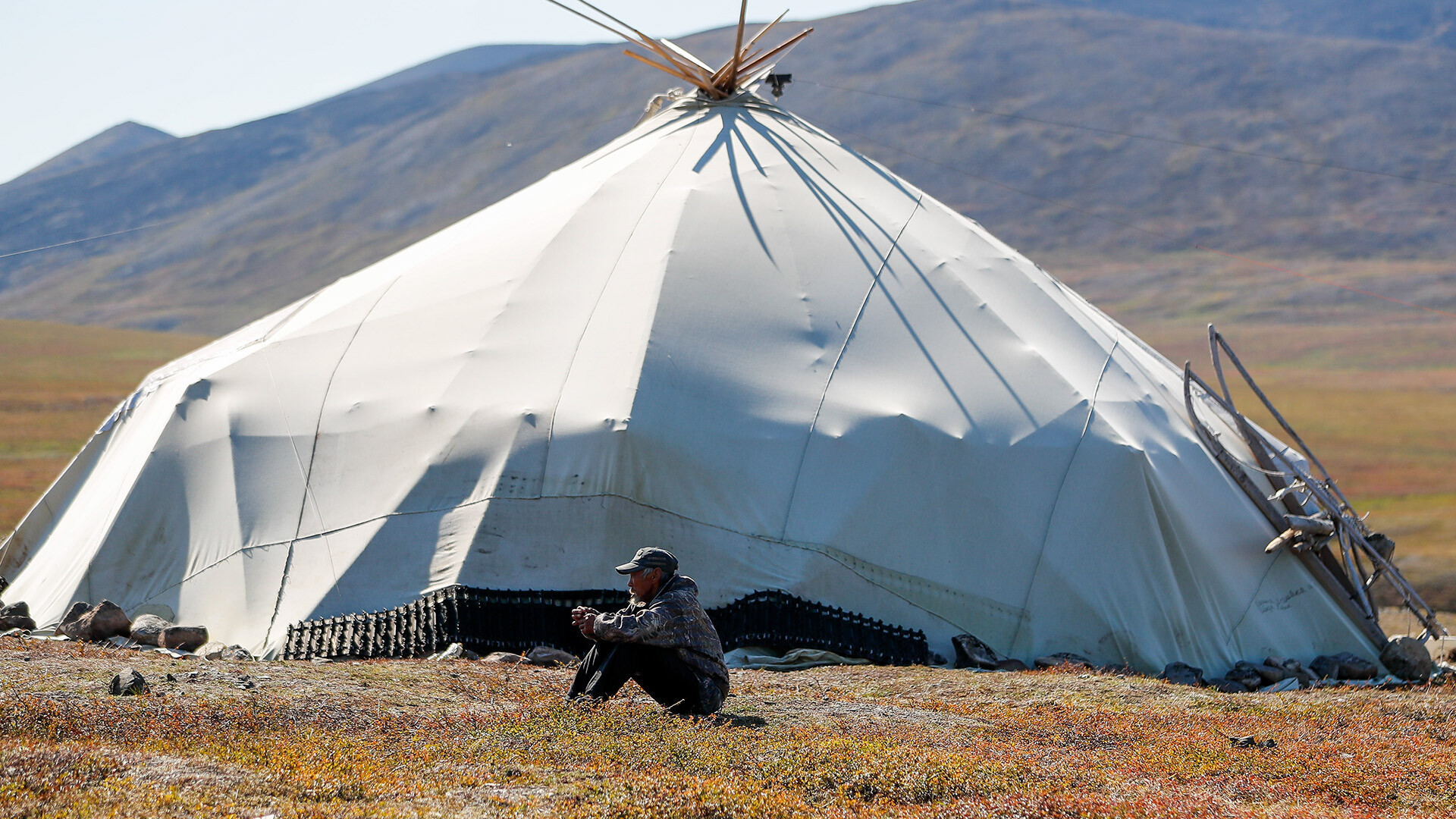 Chukotka has 14 municipal enterprises with around 600 reindeer herders and 150,000 reindeer. The Chukchi people have both personal and municipal reindeer, but they all graze together. Although a reindeer herder’s salary is modest by local standards – less than 50,000 rubles (approx. $800) – they enjoy certain benefits. For example, they can retire earlier: women at 45 and men at 50. 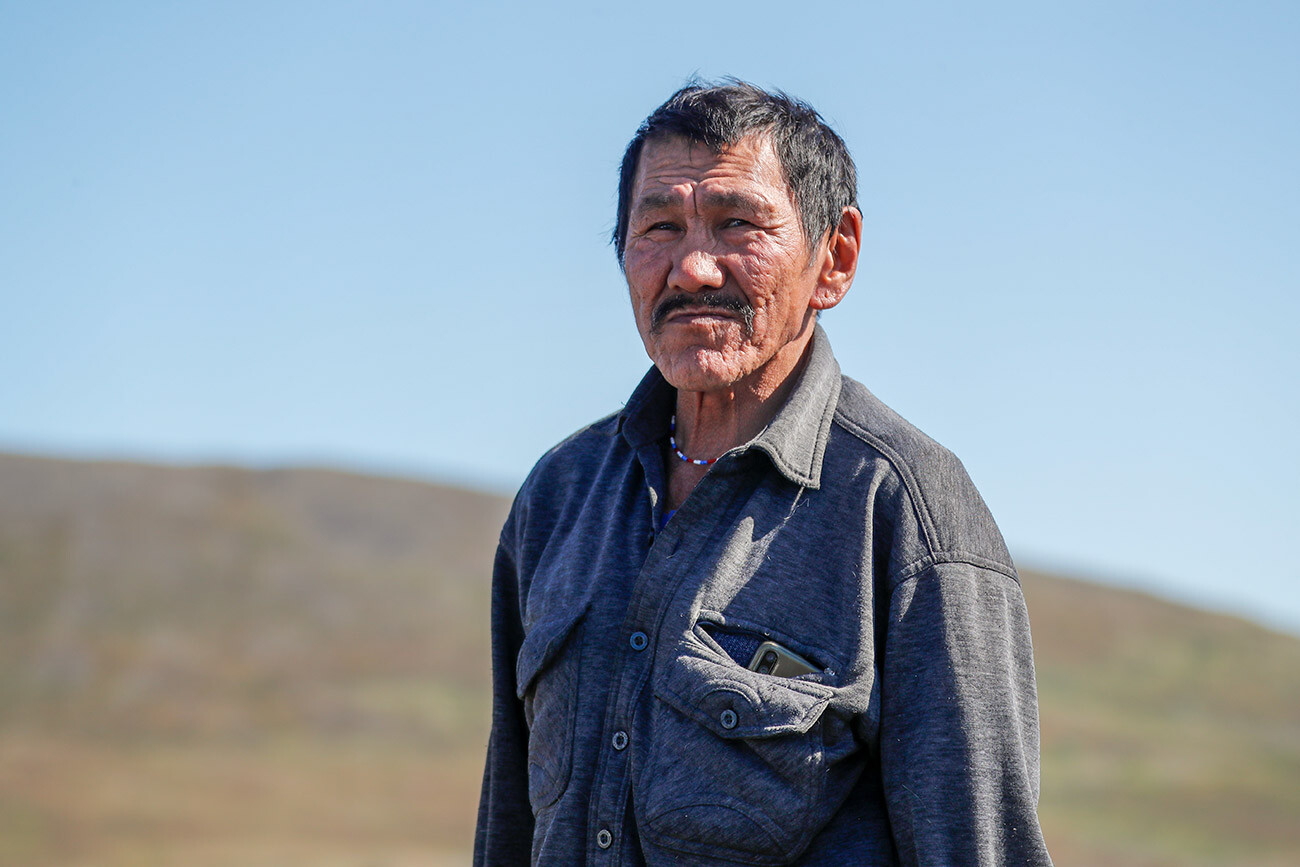 “I’m already retired, helping out my kids and grandchildren,” Vasily says, a stout and serious 50-year-old man in a gray shirt. “I’ve been here since my childhood and my workbook states that I’m a reindeer herder. We supply meat, pelts, antlers and velvet antlers to the enterprise. We receive our salaries on our bank cards – and if I need to buy something, I can simply give it to someone who will go to the settlement.”

Vasily’s older son works with him in the tundra; his younger son doesn’t want to, but his father is not cross at him for this, saying, “it’s his business”. 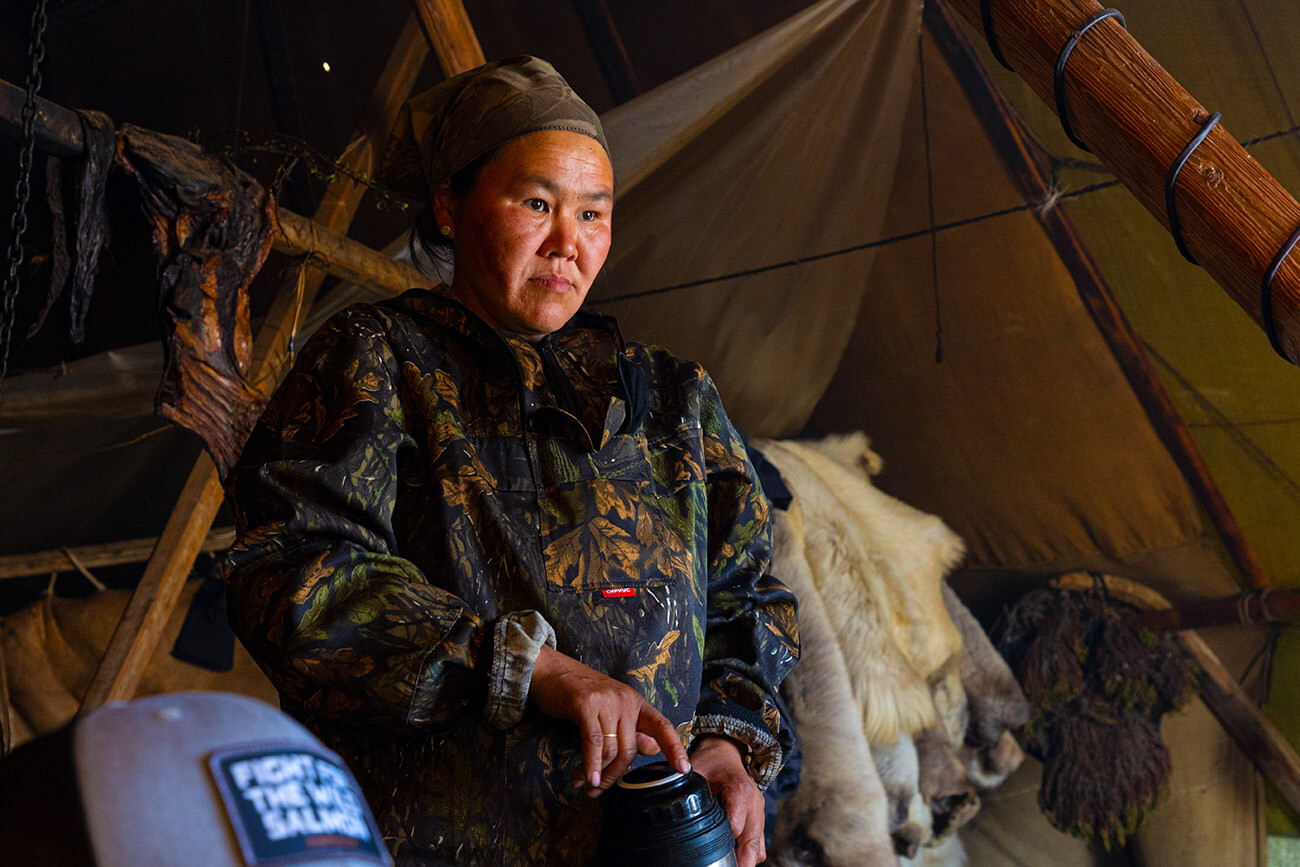 But his sister, Tamara, dropped out from school in grade five and fled back to her family in the encampment. “I decided so myself,” she explains. “I wanted to help my parents and my aunt.” She herself is already a grandmother and her grandchildren also live here.

Tamara says nowadays there’s enough of everything in the tundra. “There’s a generator, a radio so we can contact our men and other brigades.” Women are also officially listed as reindeer herders, although they are mainly engaged in housekeeping. 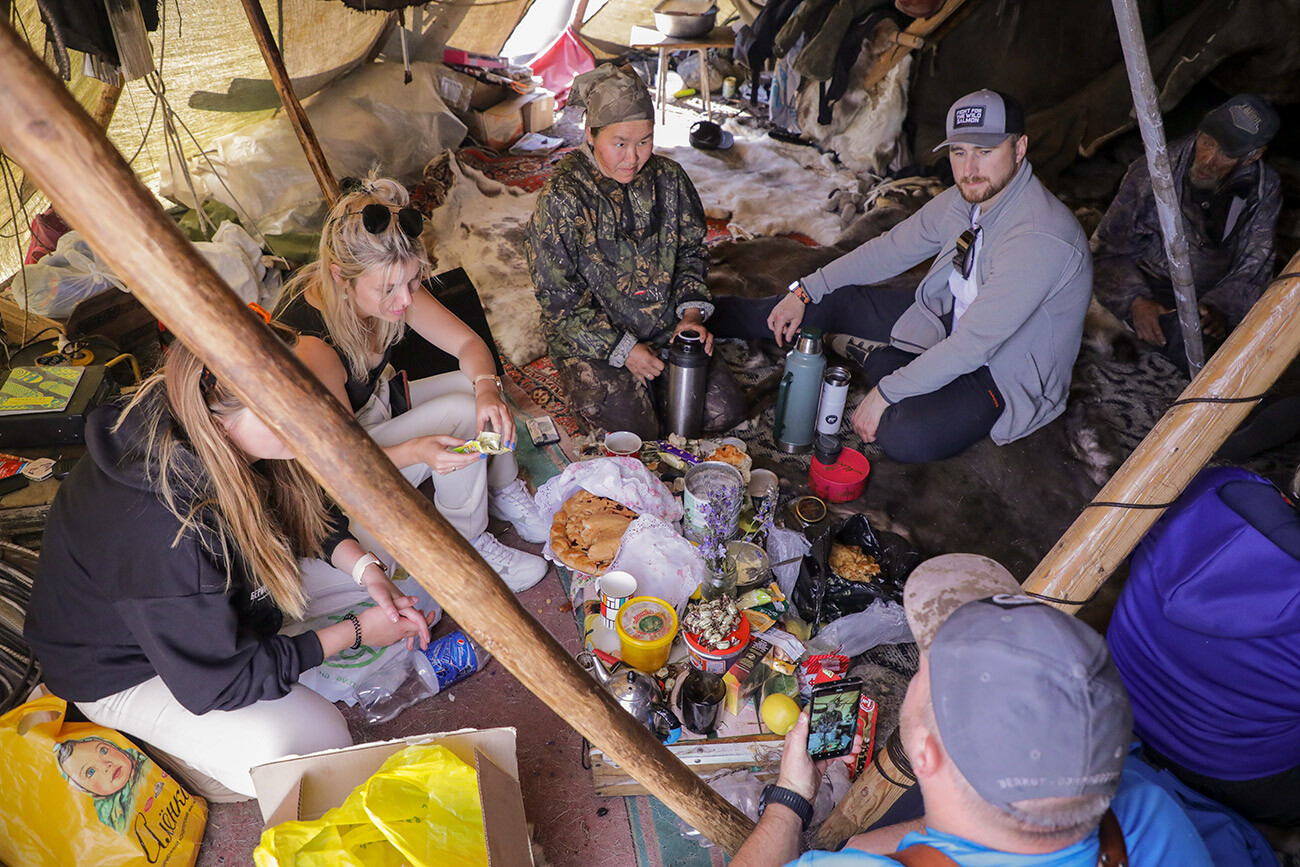 There’s plenty of work to do. Cooking food for everyone, cleaning the house, checking equipment and appliances, preparing supplies for winter, fixing clothes, doing laundry – more tasks than in the city, really. You can’t do it alone. When one gets tired of socializing, one can always go to the tundra to reflect on life.

The sea warriors of Lorino 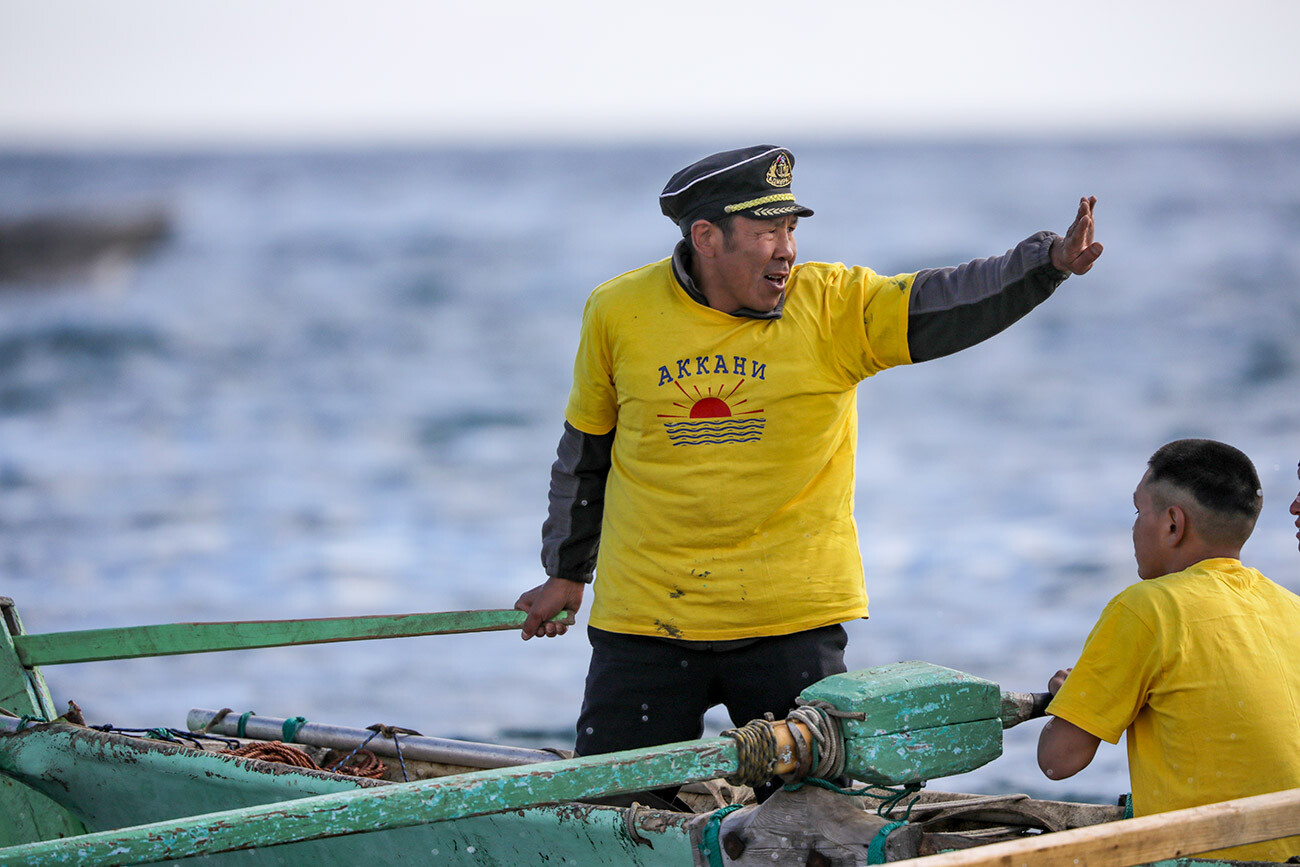 A regatta on traditional boats.

The indigenous people of Chukotka are one of the few peoples of the world who are allowed to hunt whales (others include the natives of Alaska, Greenland and the Caribbean island nation of Saint Vincent and the Grenadines). Certain quotas are distributed among their communities. The largest number of whales – more than 40 per year – is harvested in the national village of Lorino (with a population of around 1,500 people), about 500 km east of Anadyr and 150 km west of Alaska.

Apart from whales, they hunt pinnipeds – walruses and seals of several species. Modern Chukchi go hunting on motor boats. They appear tiny, but they can haul several tons of weight. Hand harpoons are also used for hunting. 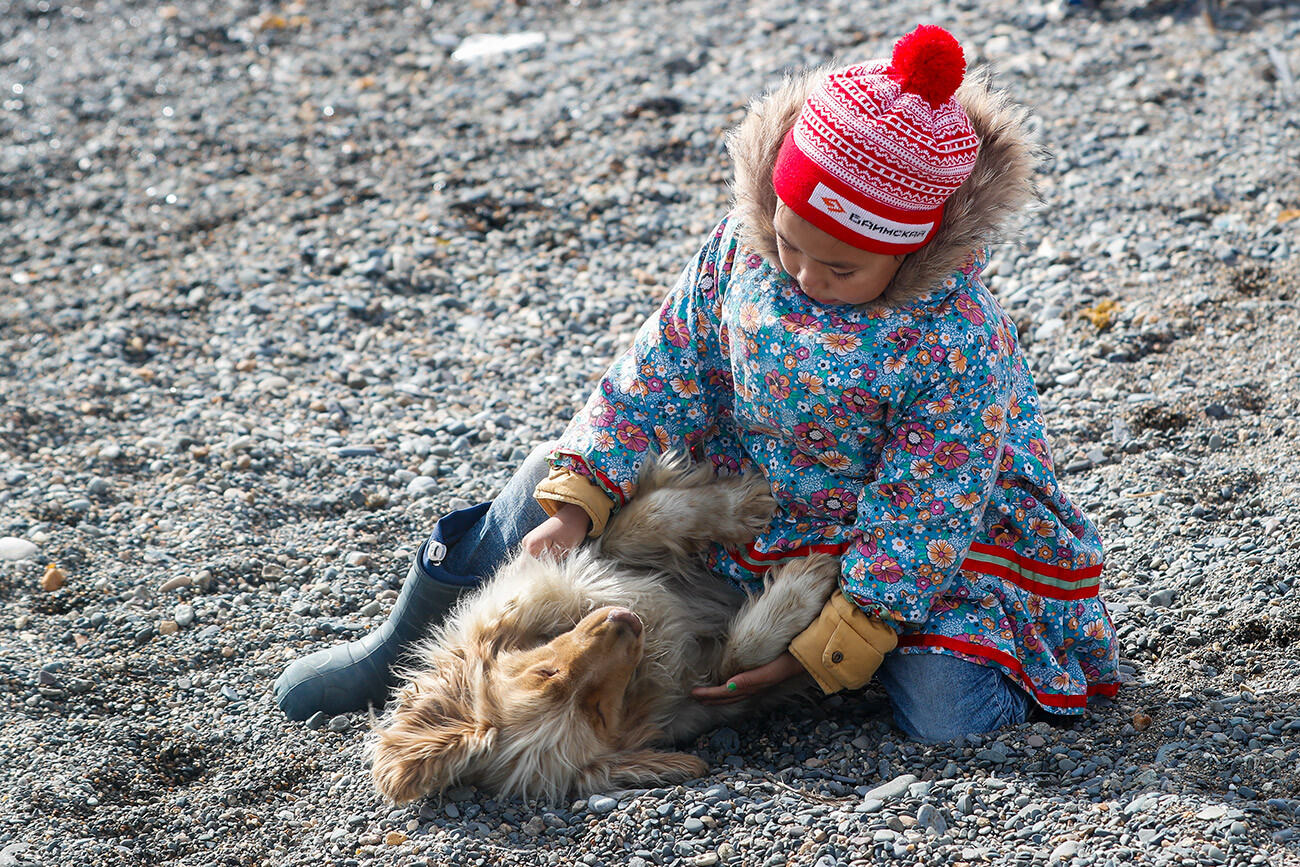 A kid in Lorino.

The sea hunters are split into brigades and receive the same payment and benefits as the reindeer herders. Their work is very dangerous: not only is the Bering Sea quite moody, but sometimes sea animals flip their boats and then people overboard have to be rescued by their colleagues. Many Chukchi, albeit spending all their life at sea, don’t know how to swim. How could one swim when the water is so icy all year round?

The hunter’s health suffers from such conditions, but even in their old age, they still love the sea. Dmitry hunted sea animals from the age of 15 until his retirement. He’s now 68. From hard work, his face is weather-beaten, he can’t bend his fingers and his hands barely obey him. He’s almost blind, but he comes to the sea and, sitting on the cold shore, peers at the boats passing by.

“I was born here, I’m from Lorino,” he says under his breath. “We went to the sea in any kind of weather. It was really hard back then and now my legs hurt constantly.”

Tourism at the edge of the Earth 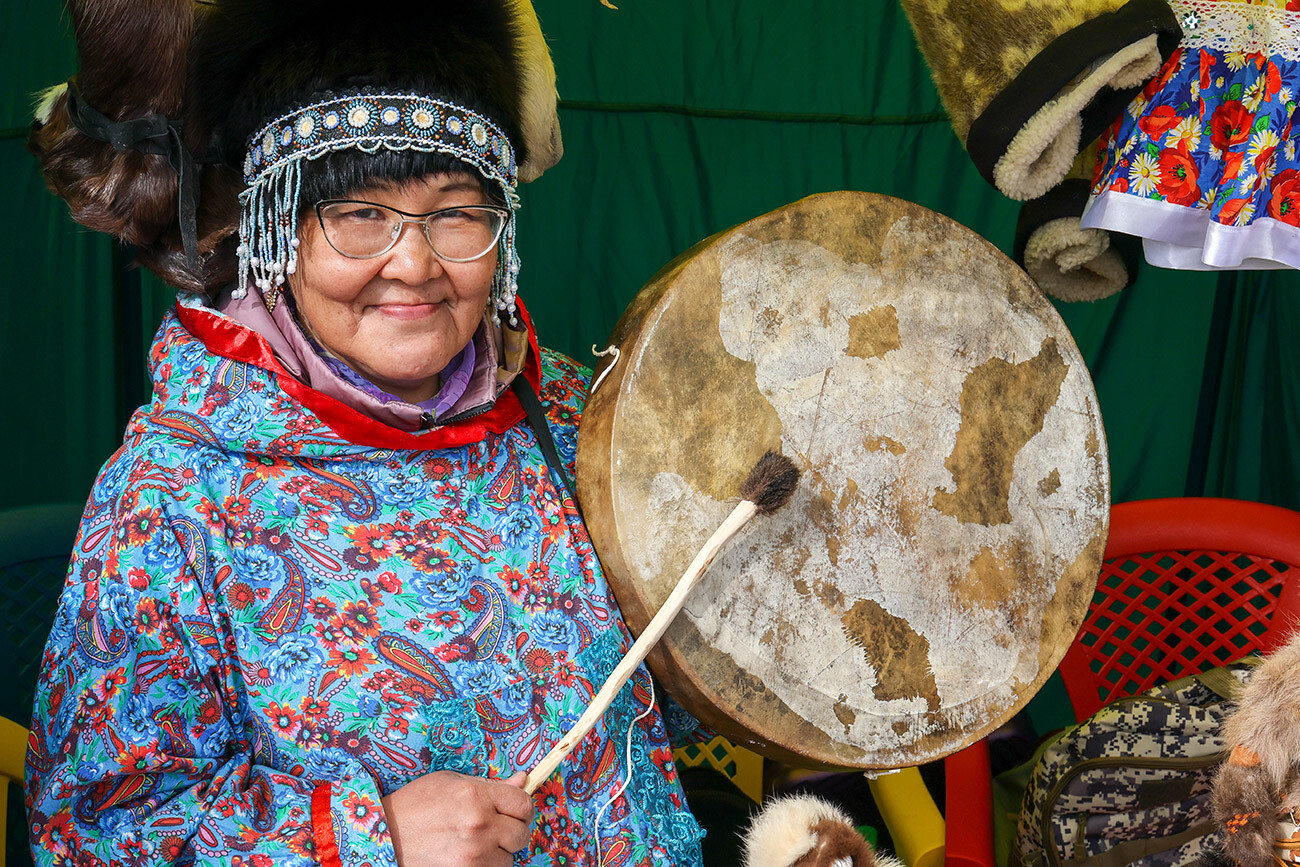 Olga and her souvenirs.

The locals do their best to maintain their national traditions; they tell kids about the culture of the Chukchi people, make souvenirs themselves and welcome tourists with open arms – who come only in summer when it’s not that cold. In Lorino, they sell charms – symbols of the sun, long traditional shirts – komlaykas, and carved walrus bone trinkets – made by local craftsmen.

“We love our people and want all other nations of the world to see what we can offer,” Olga says, who spent her entire life doing all kinds of local crafts, from tailoring to bone carving. “For now, it all lives off pure enthusiasm, without any profit.” 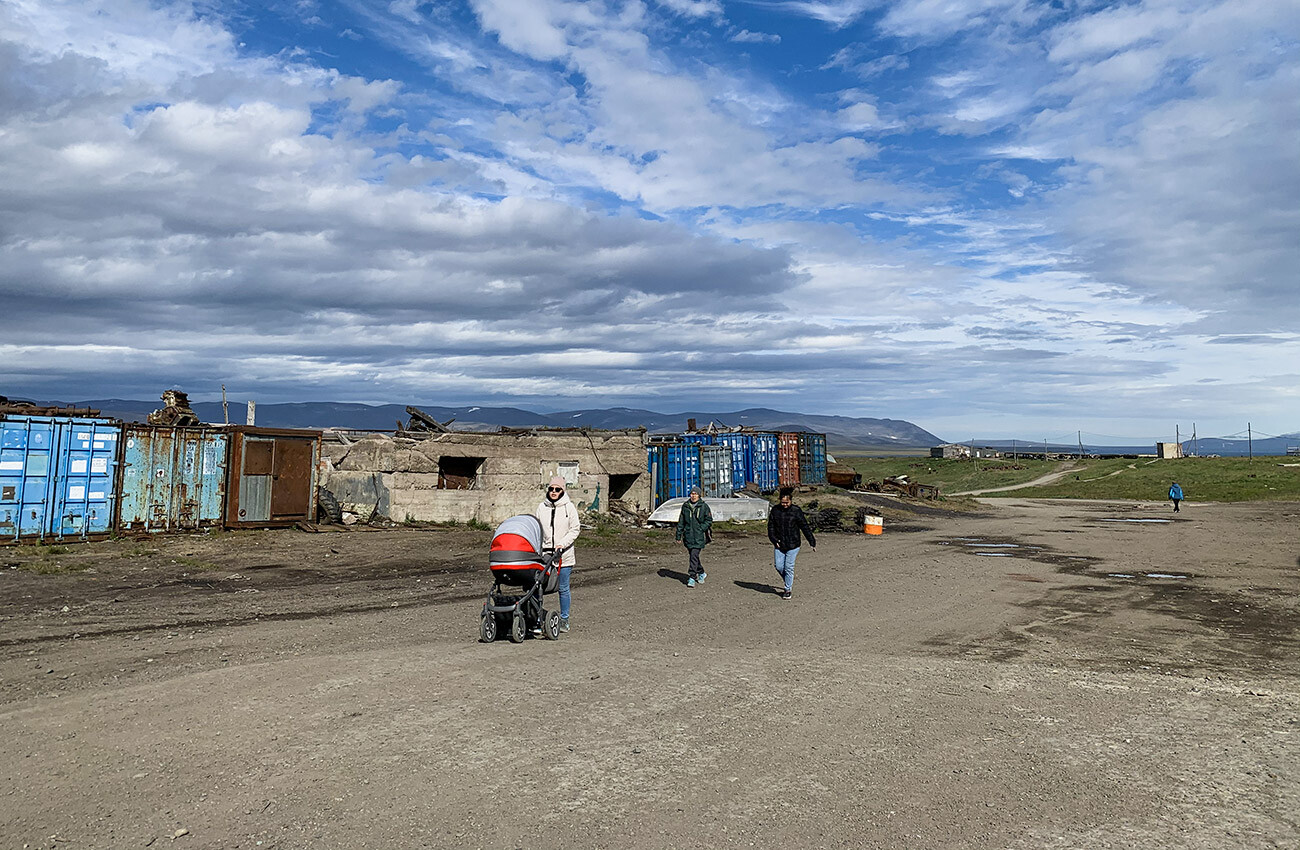 The road from the Bering Sea coast to Lorino.

At the same time, the Chukchi are open to new cultural traditions from “the mainland”. Mariam was born in Lorino, but spent a long time living in Khabarovsk, the largest city of the Russian Far East (with more than 600,000 people), and recently returned to help her retired mother. “When I came here, it was so hard to get used to the prices (they’re much higher than in the city) and to the situation. But people can live anywhere,” she says. Mariam had to remember what it was like to live right next to bears, when there’s only the tundra and the cold Bering Sea for many kilometers around. However, she brought along many holidays that hadn’t been celebrated around here before. “Usually, we celebrate our Chukotka New Year on December 22 and the regular one on January 1. Now we’ve started celebrating Easter, too – my family liked baking kulichi (Easter bread) and painting eggs!”