Chukotka: The ethereal nature of Russia’s most faraway region (PHOTOS) 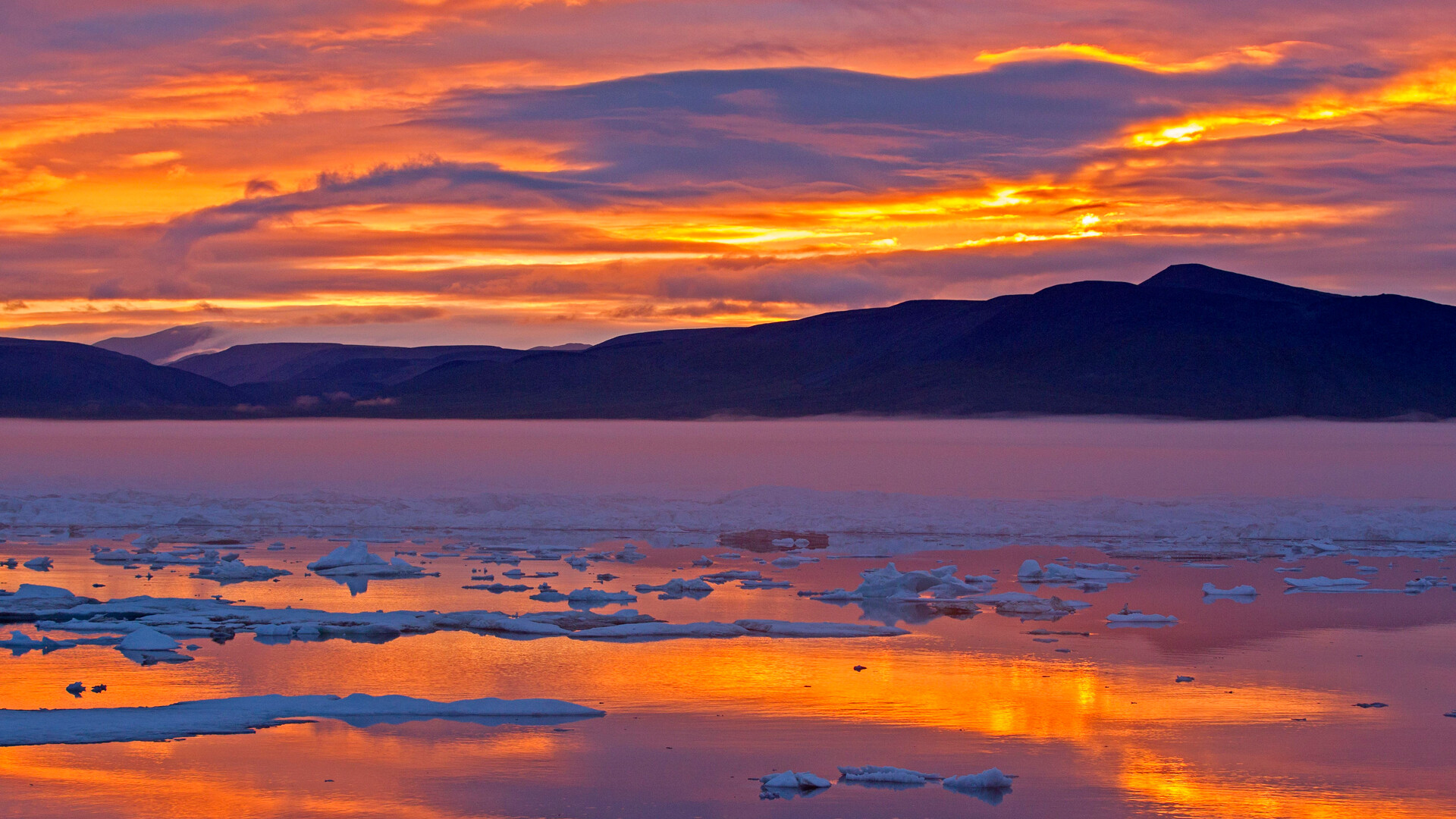 Sylvain CORDIER/Gamma-Rapho/Getty Images
The easternmost region of Russia looks like another planet! Check out these “Martian” landscapes, colorful tundra seen from above and untouched wildlife, which has been neighboring humans for centuries.

The Chukotka Autonomous Okrug is the easternmost region of Russia and Eurasia, a real edge of the earth. And it is very different from all other regions of the country. It’s a peninsula covered with tundra and permafrost, located between the Chukchi and Bering seas. Most of the region is above the Arctic Circle and it’s constantly cold, windy and rainy, but it makes up for it with amazing picturesque scenery that you won’t see anywhere else. 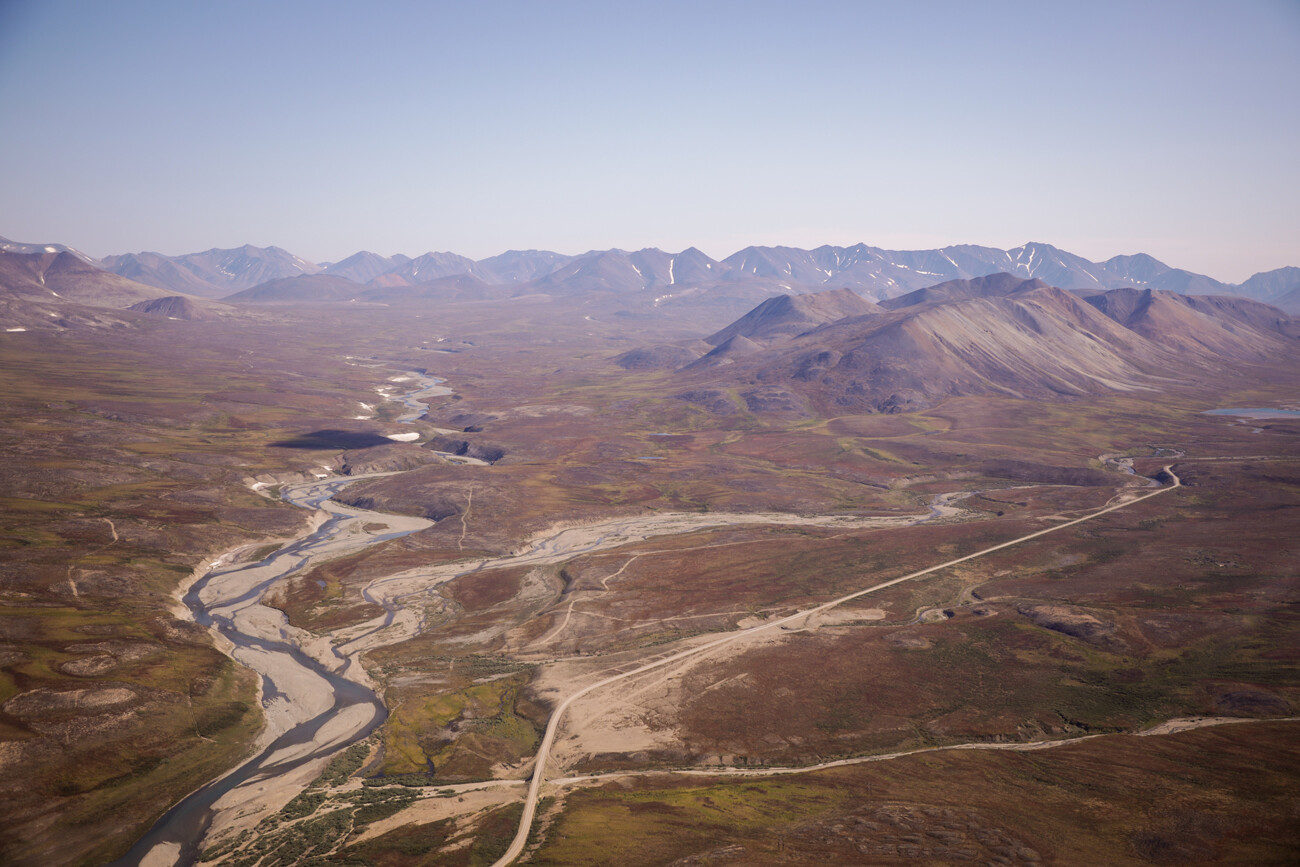 You think the tundra is a boring, monotonous plain? Think again! Look, there are hills, rivers and many tiny flora. Only 50,000 people live in this vast area the size of several European countries, however, mostly near the shores. The tundra is home to nomadic reindeer herders (here’s why) 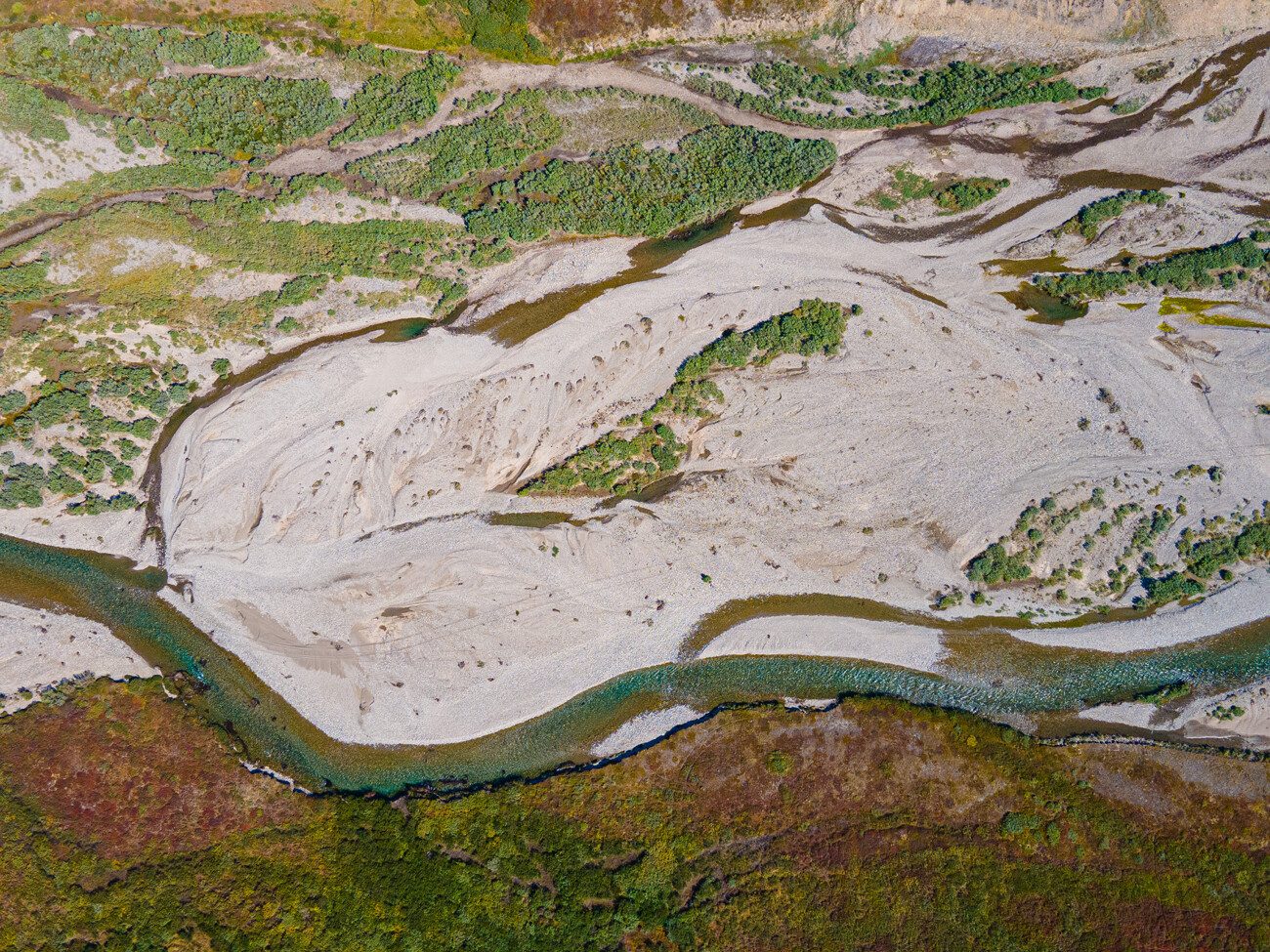 A cold river running between the hills in the tundra with swamps and lakes nearby. 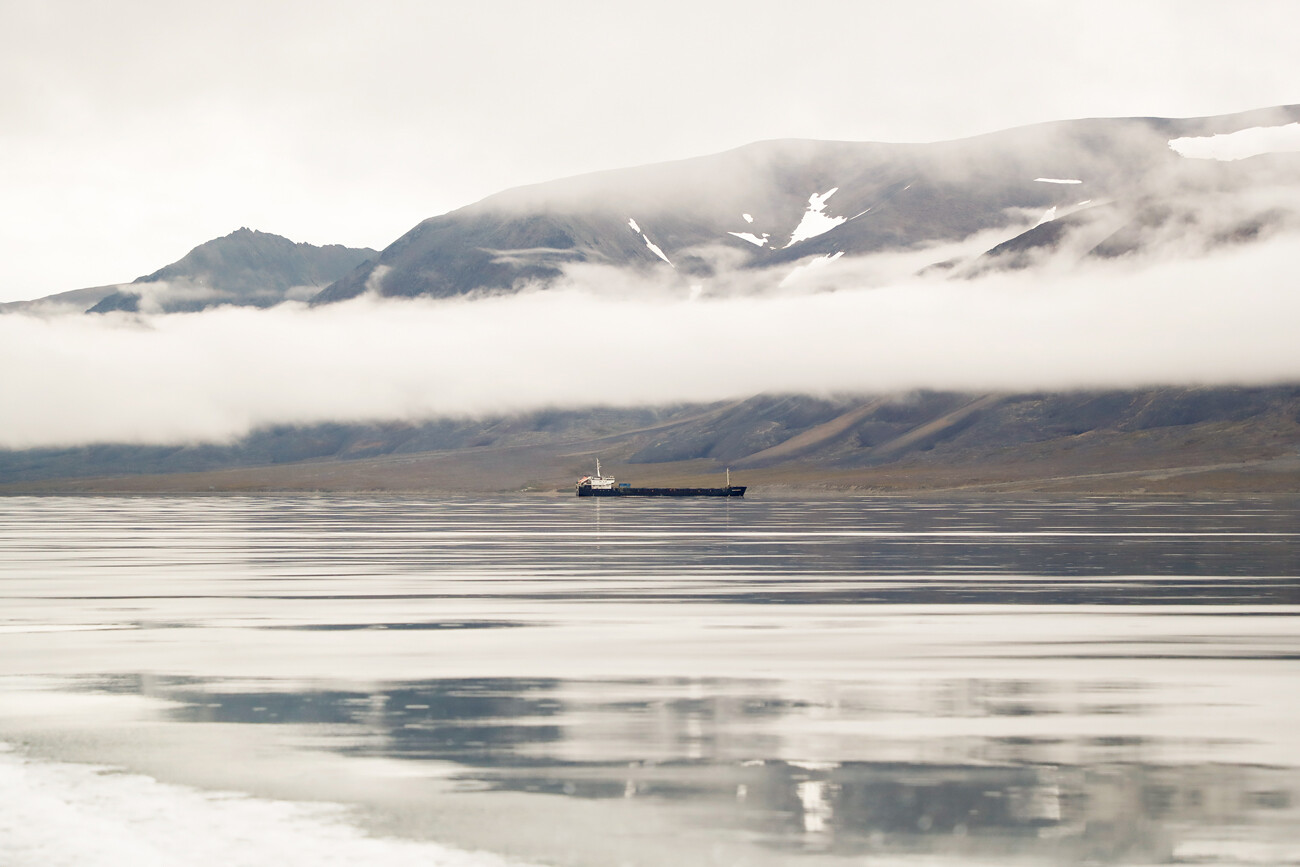 The Bering Sea in the fog. The cold and turbulent sea separates the continents of Asia and North America. You can only see its waters in summer: the rest of the time it’s covered by ice. 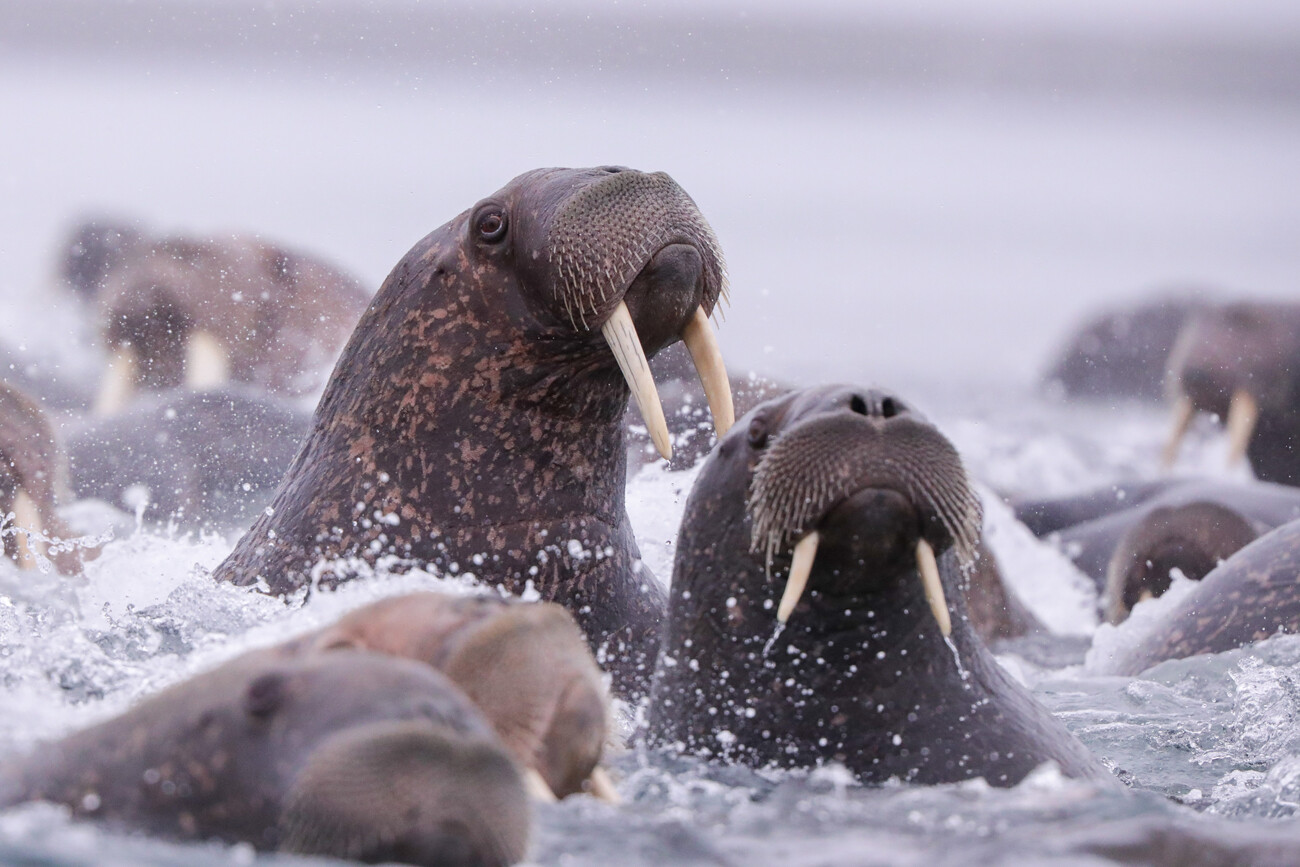 Huge walruses are the hosts of the Bering Sea. They have favorite places where they gather in groups and roar, chatting with each other. It’s hard to call them rookeries, because these places are right in the water. 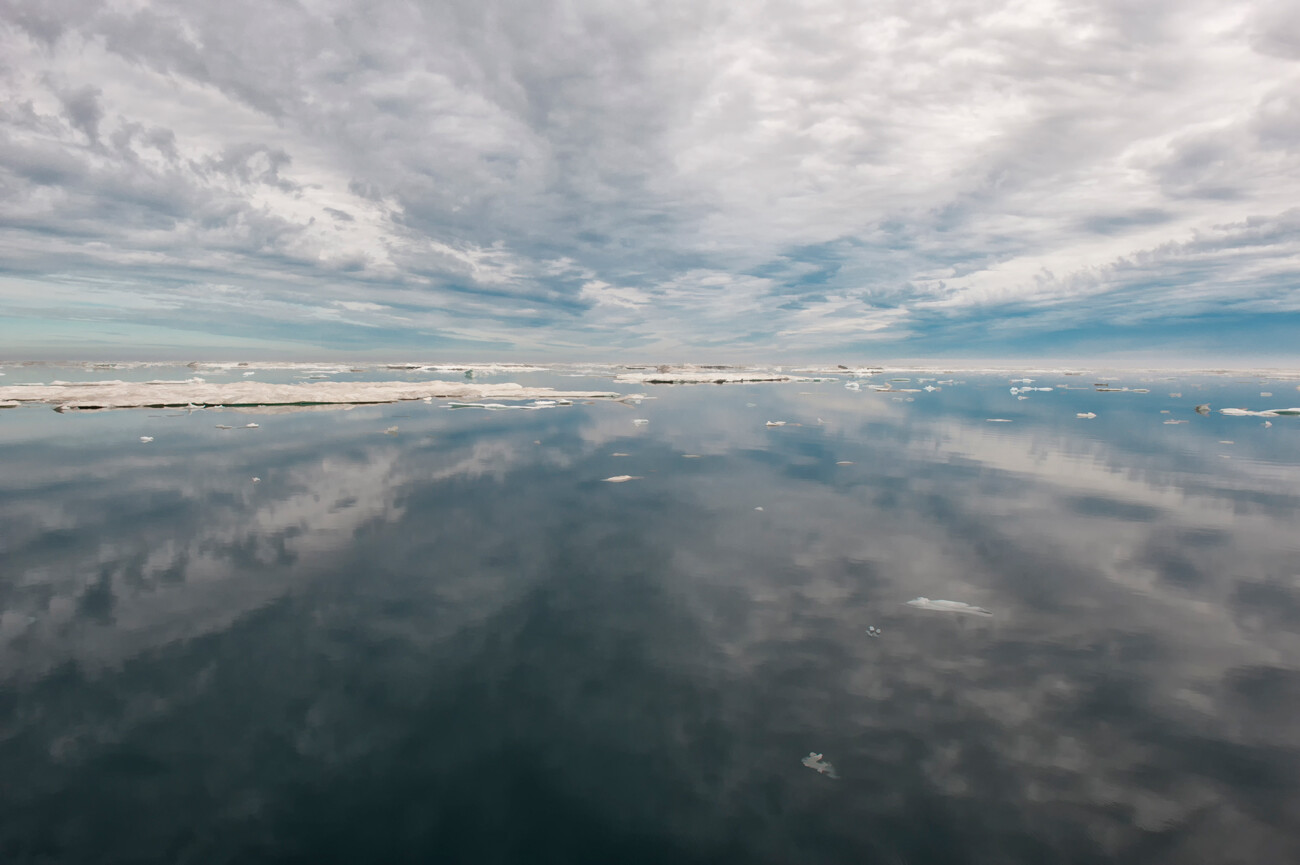 The Chukchi Sea, which washes the peninsula in the northeast and flows into the Arctic Ocean, is even colder than the Bering Sea. The ice does not melt even in summer, but polar bears don’t mind it. 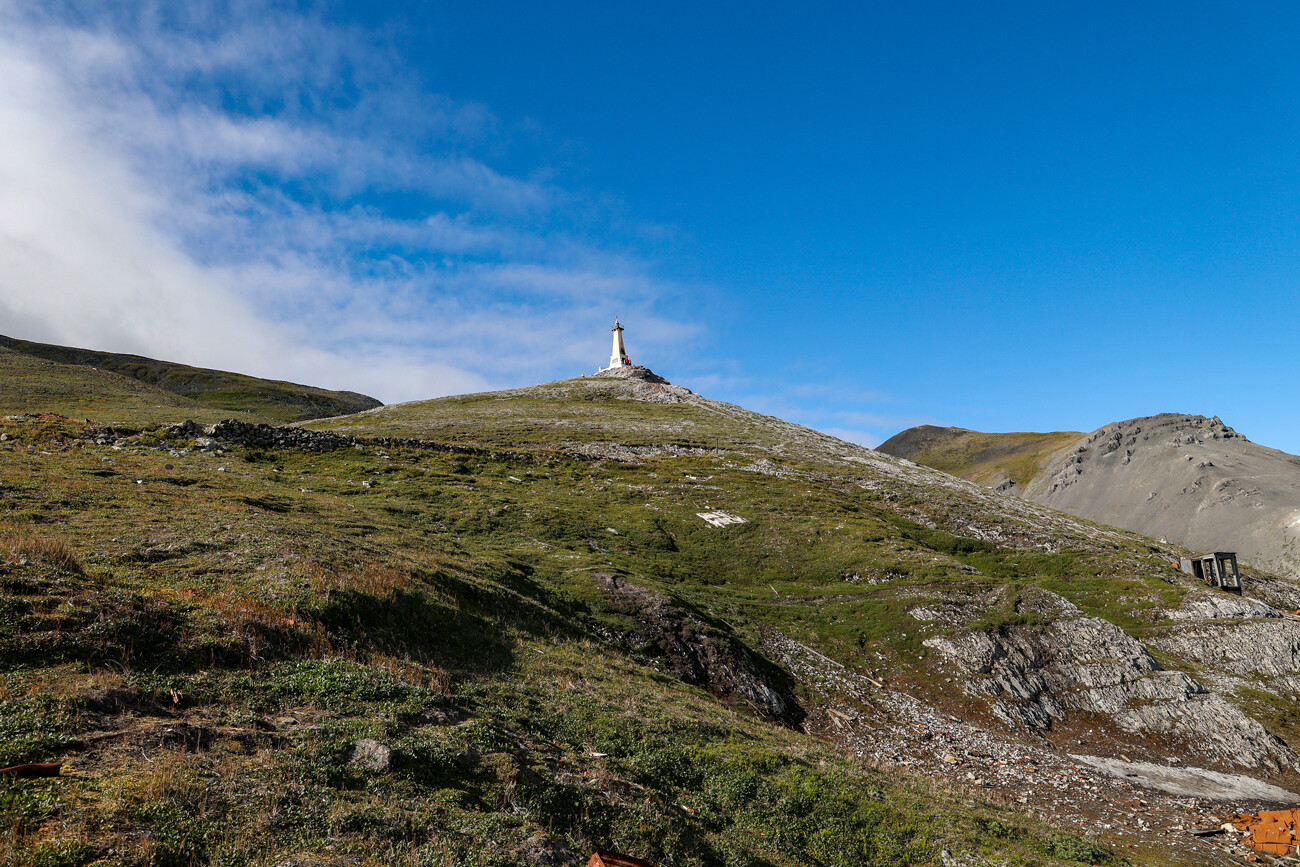 Chukotka is also home to the easternmost point of Russia (and Asia), Cape Dezhnev. It was named in honor of the Cossack discoverer Semyon Dezhnev. Read more about what the edge of the Earth looks like here. 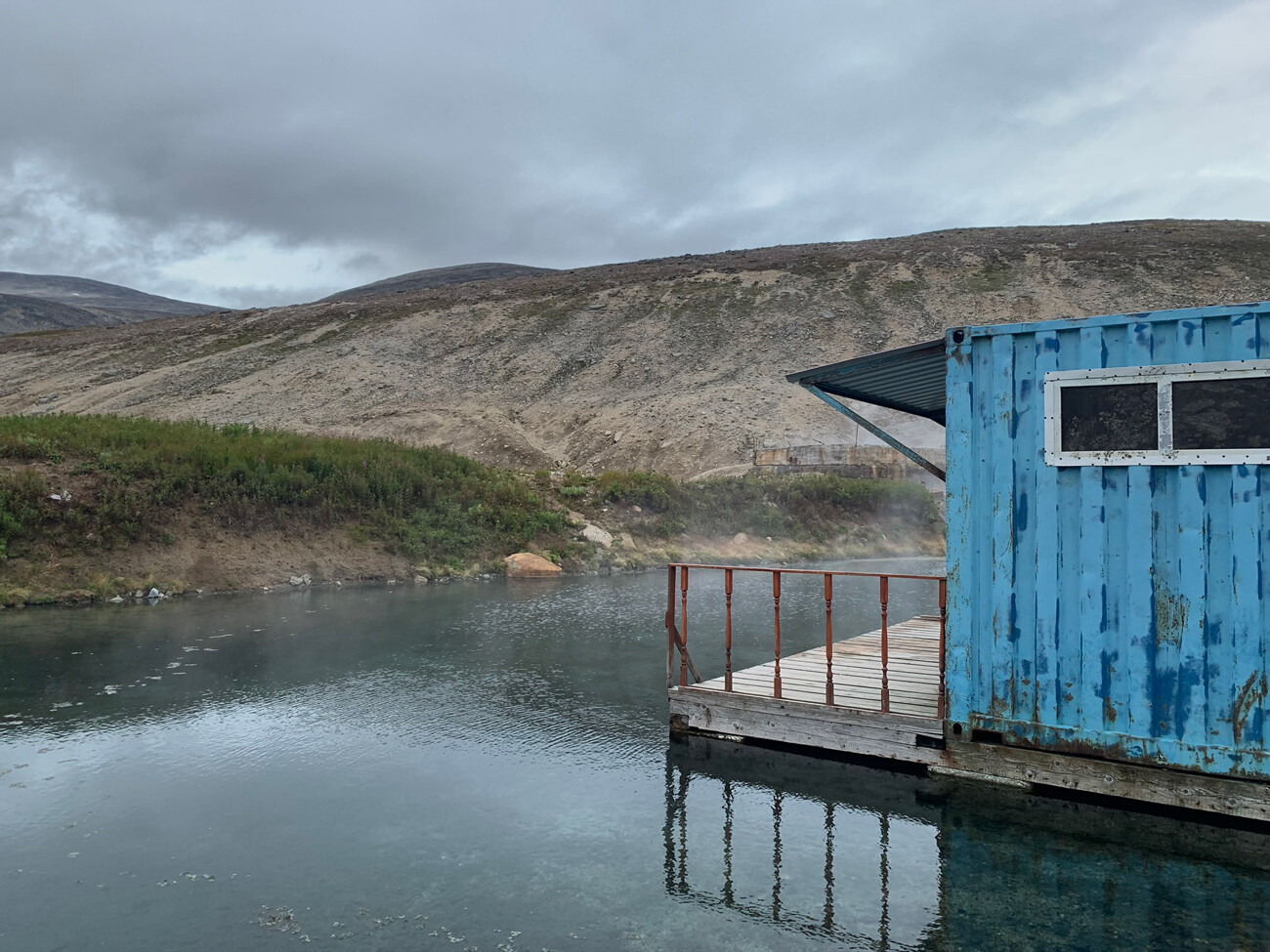 It’s amazing, but in the middle of the tundra and permafrost there are very hot underground springs. They are located 15 kilometers from the village of Lorino in the east of the Chukchi Peninsula. The two springs are next to each other and they have different temperatures, which vary from 40 to 60 degrees Celsius. 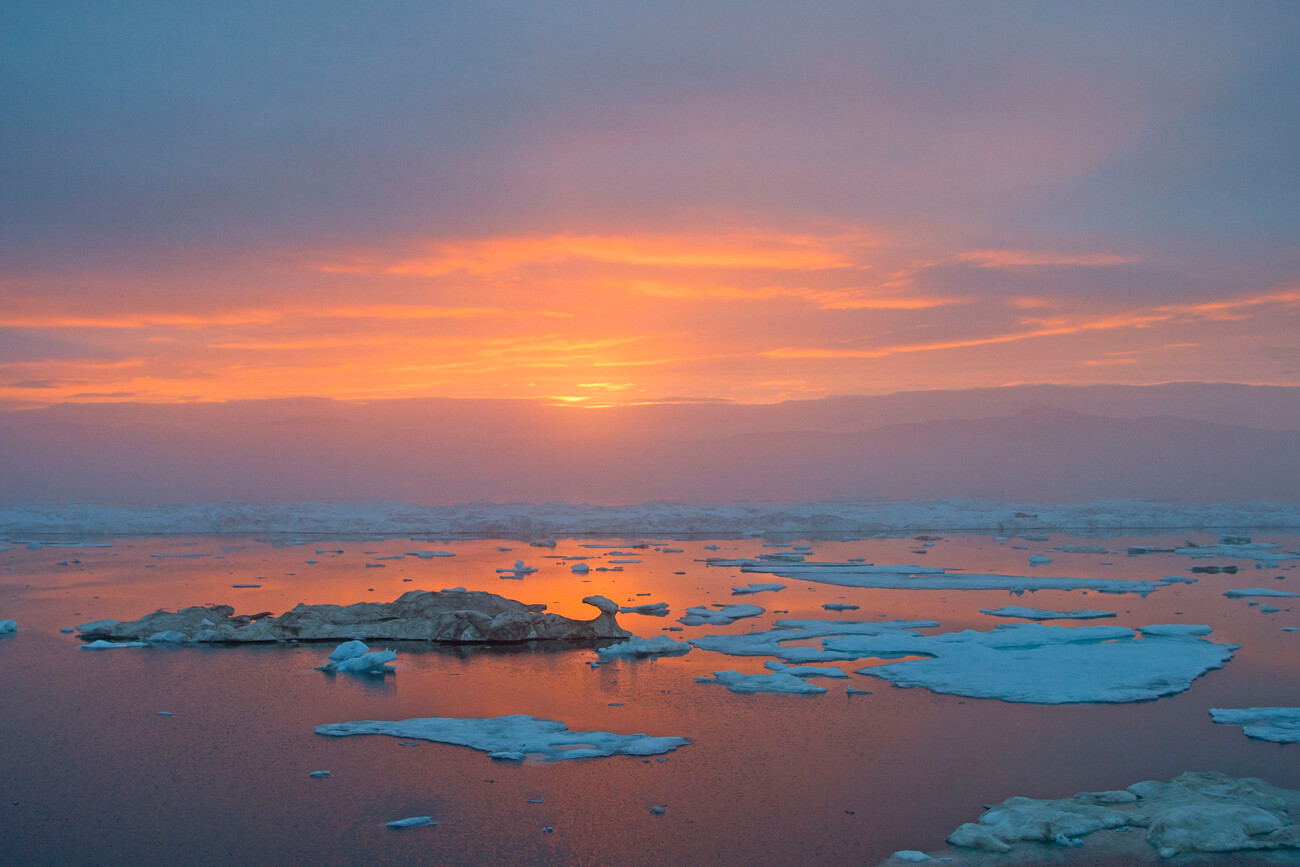 Wrangel Island in northeastern Chukotka is located between the Western and Eastern hemispheres. The 180th meridian passes through it, which conventionally divides time into today and tomorrow (officially, the date line was moved for convenience to the Russia-U.S. sea border). But, you cannot walk across the island, as it is uninhabited by people. Wrangel is nicknameed “the island for polar bears”. 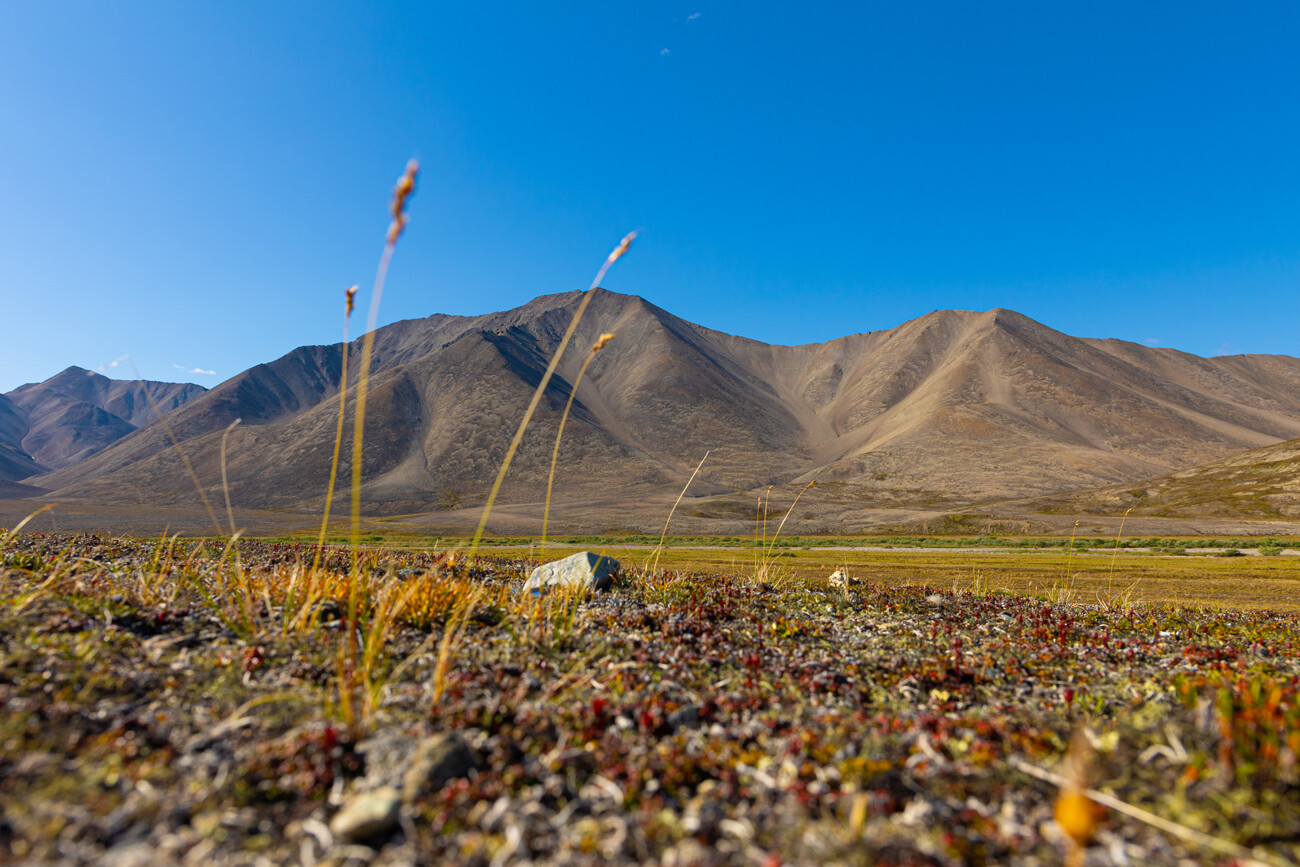 Nevertheless, the 180th meridian passes over land in Chukotka, as well. This is what the place looks like. 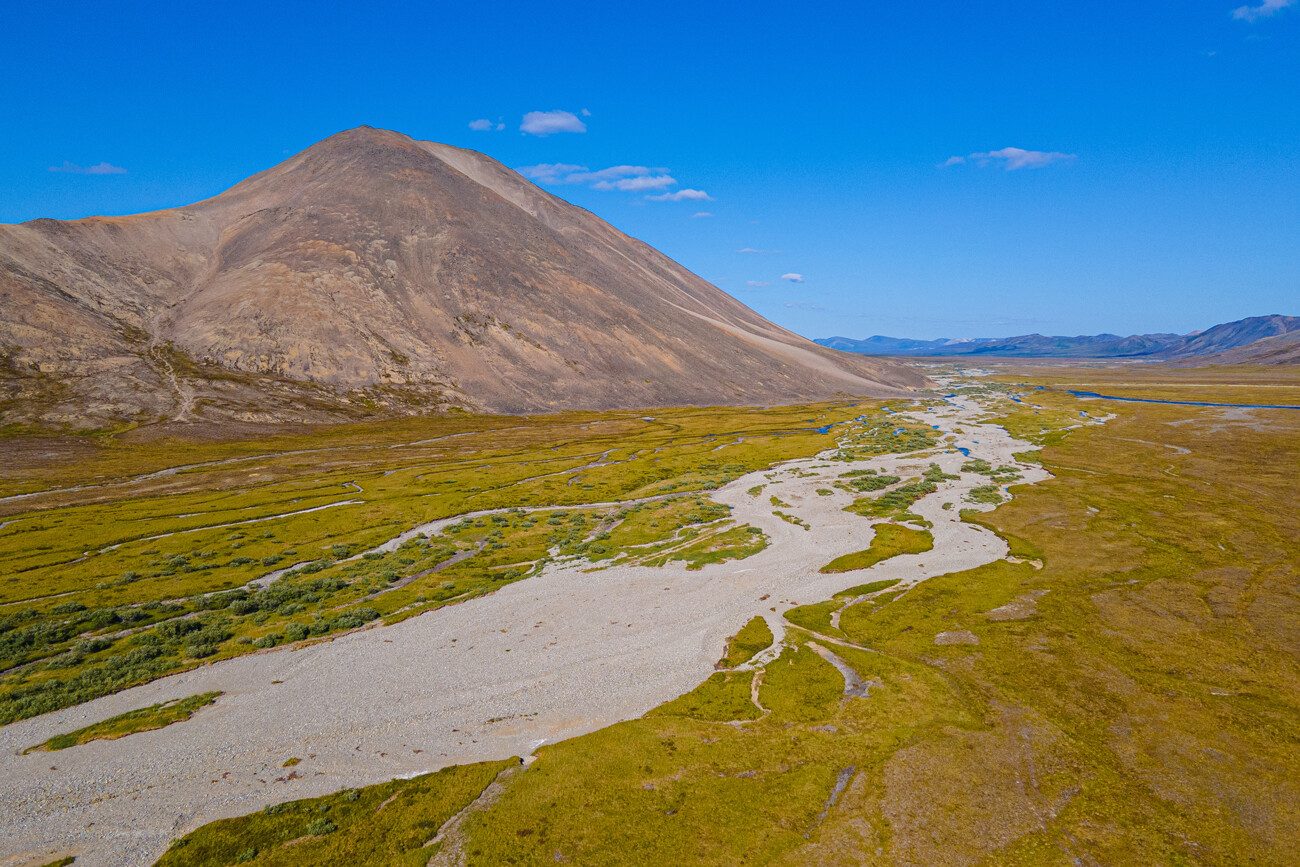 A dried up riverbed along the hills near the 180th meridian. 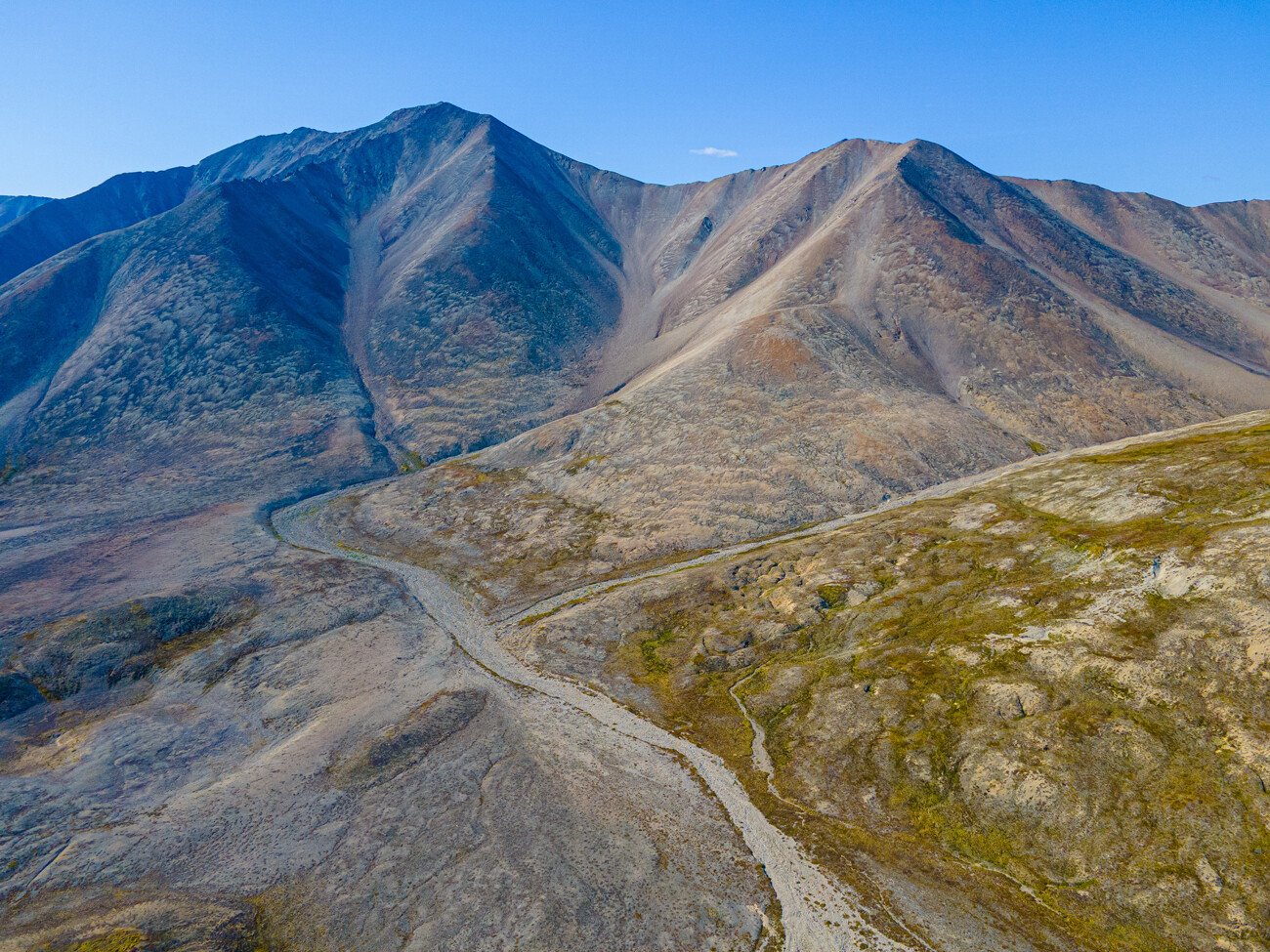 Chukotka hills in the tundra as seen from a helicopter. 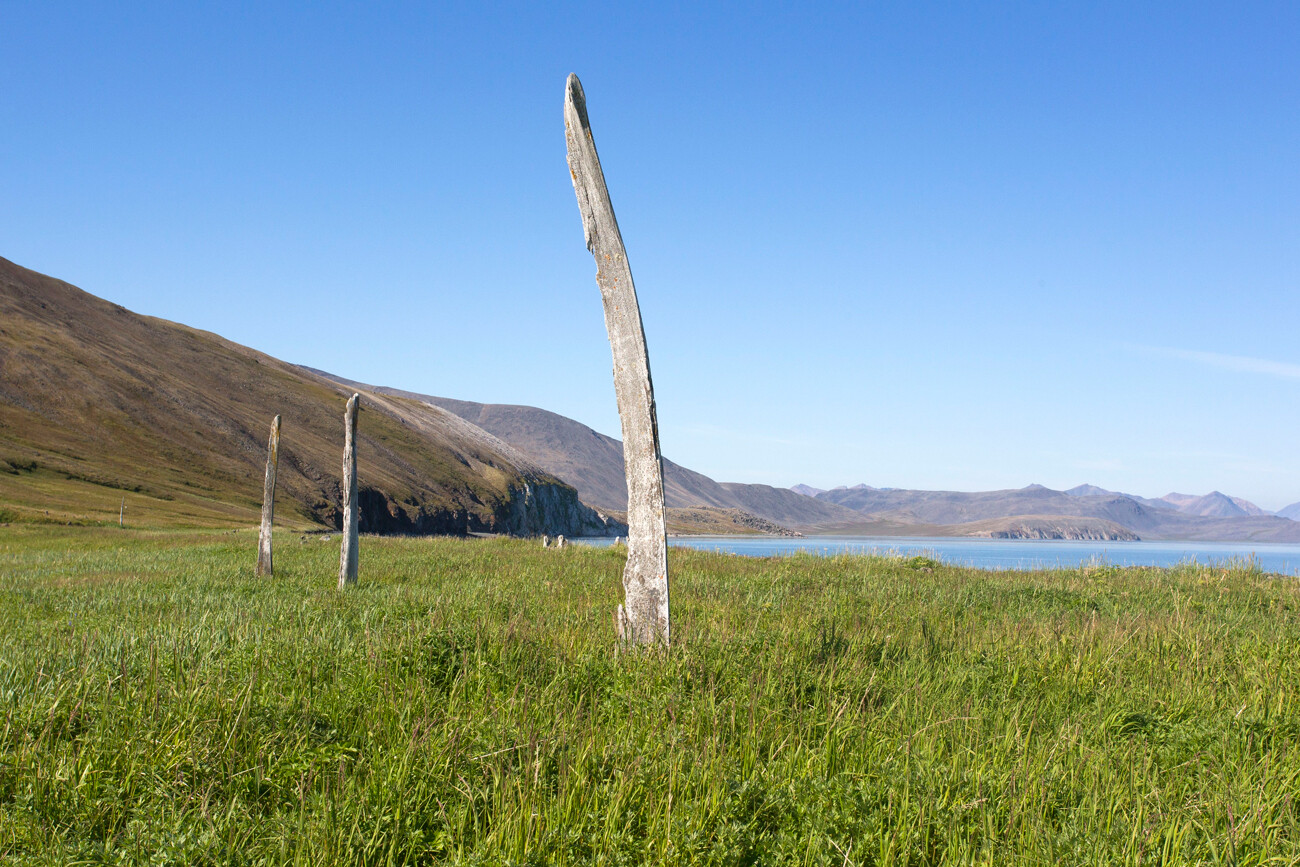 This is the Whale Bone Alley on Yttygran Island in the Bering Sea. The place is covered with the remains of jawbones of gray whales or Bowhead whales. The alley dates back to the 14th-16th centuries and is considered an ancient Eskimo sanctuary. It was discovered only in 1976. 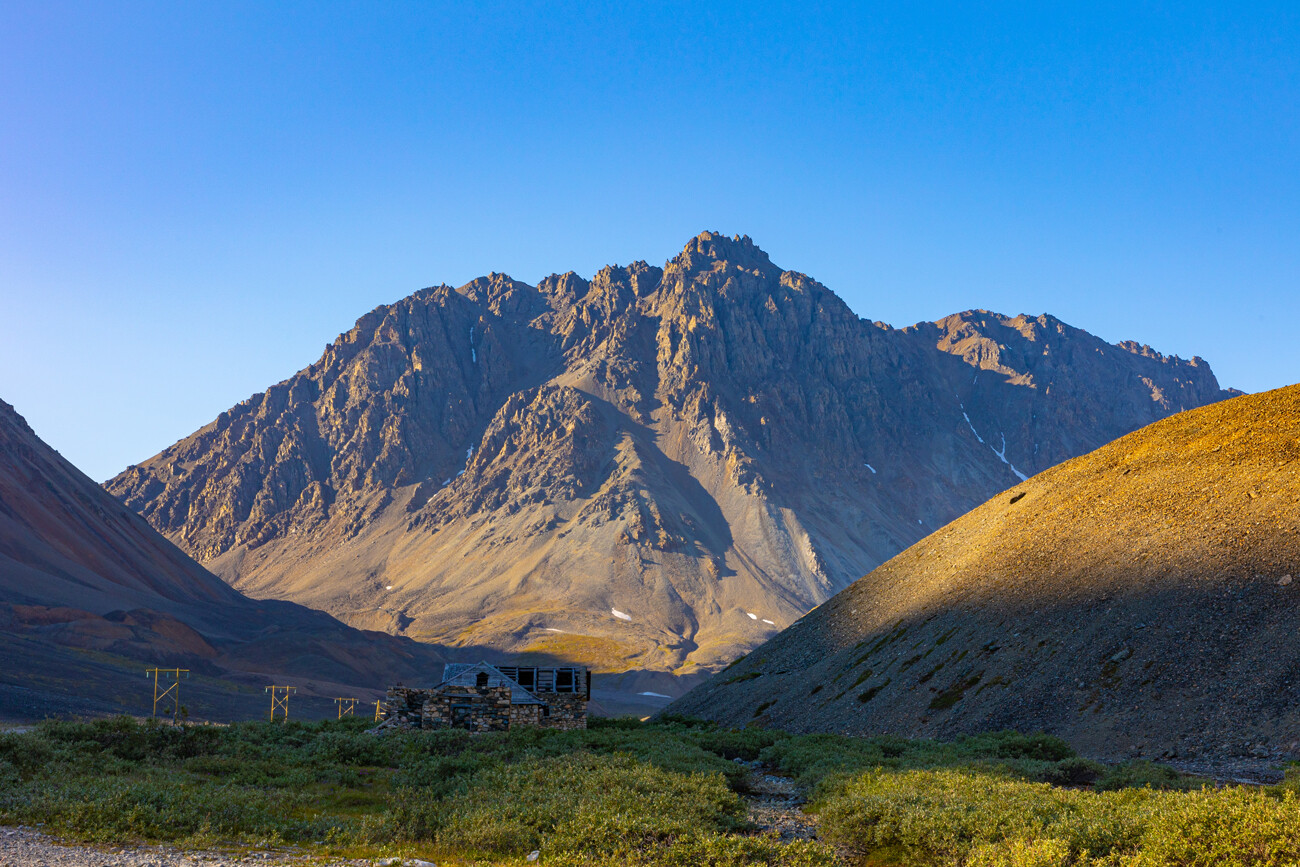 The road to the abandoned village of Iultin, which crosses the Polar Circle. In the 1930s, one of the world’s largest deposits of tin, wolfram and molybdenum was discovered there. In the 1990s, due to the crisis related to the collapse of the USSR, industrial production ceased, enterprises went bankrupt and people deserted the village.