5 SECRETS of Alexander Garden, the park by the Moscow Kremlin walls (PHOTOS) 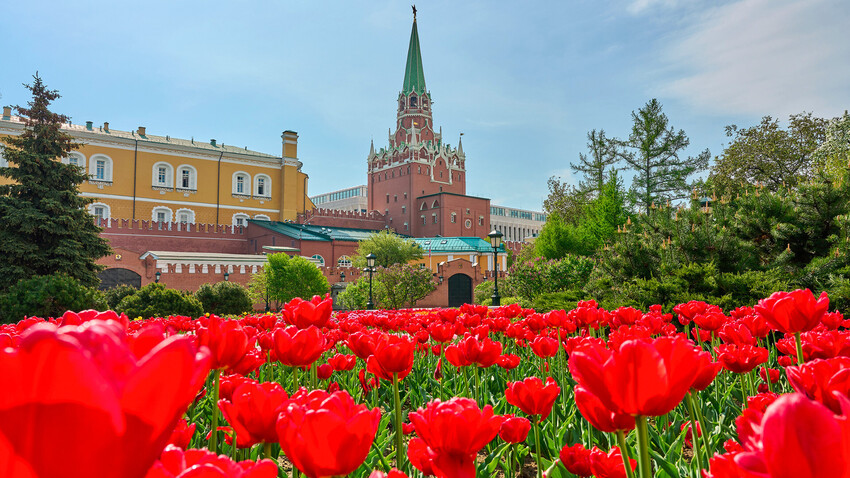 Legion Media
What’s so special about this park? What was there before it was built? And what’s the so-called ‘Lower Garden’, where no one is allowed? Find out about all this and more below!

1. The pillars of the Alexander Garden fence feature fasces, the image of which is prohibited in many countries 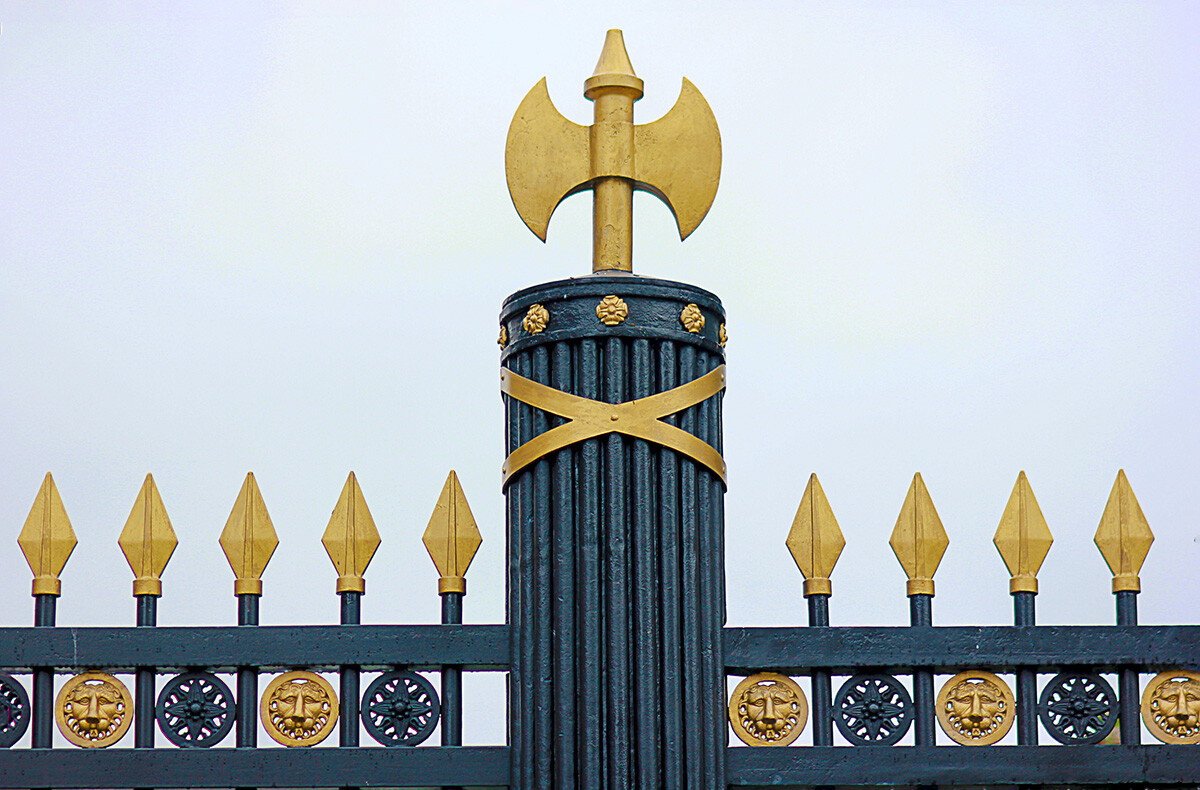 The garden right by the Moscow Kremlin wall was built after the war between the Russian Empire and France, in 1819-1823. Initially called the Kremlin Gardens, it came as part of the plan to reconstruct Moscow after the notorious fire of 1812. It was renamed Alexander Gardens (in the plural, which you will read about below) only in 1856, after Alexander II had been crowned. 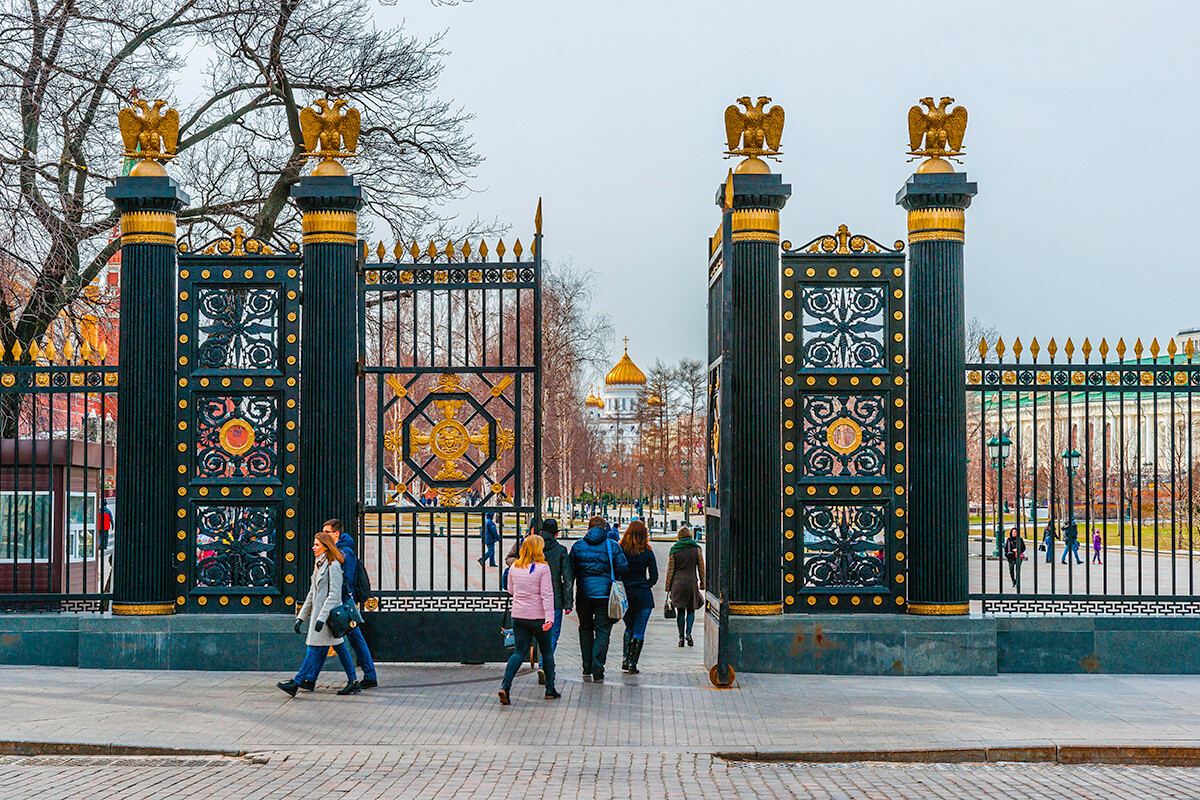 A massive cast iron gate at the entrance from the Red Square reminds of the memorial significance of the park, while the fence pillars are in the shape of fasces - a bundle of rods or whips. In the Roman Empire, it symbolized magistrates’ right to use force to exercise power, with an ax stuck in the rods standing for their right to punish. After World War I, Benito Mussolini picked fasces as his party’s insignia; thus, in many western European languages, the word ‘fascism’ is a derivative from ‘fasces’.

In some countries, fasces are perceived as a symbol of unity and statehood, while in others, they сontinue to be looked on as a fascist symbol.

2. There is a place, where one can hear the underground Neglinnaya River

Prior to the 19th century, the Neglinnaya River flowed through the territory of the garden. It used to be a clean, affluent river with outdoor festivals held on its banks. The Neglinnaya was first mentioned in the chronicles back in 1401. 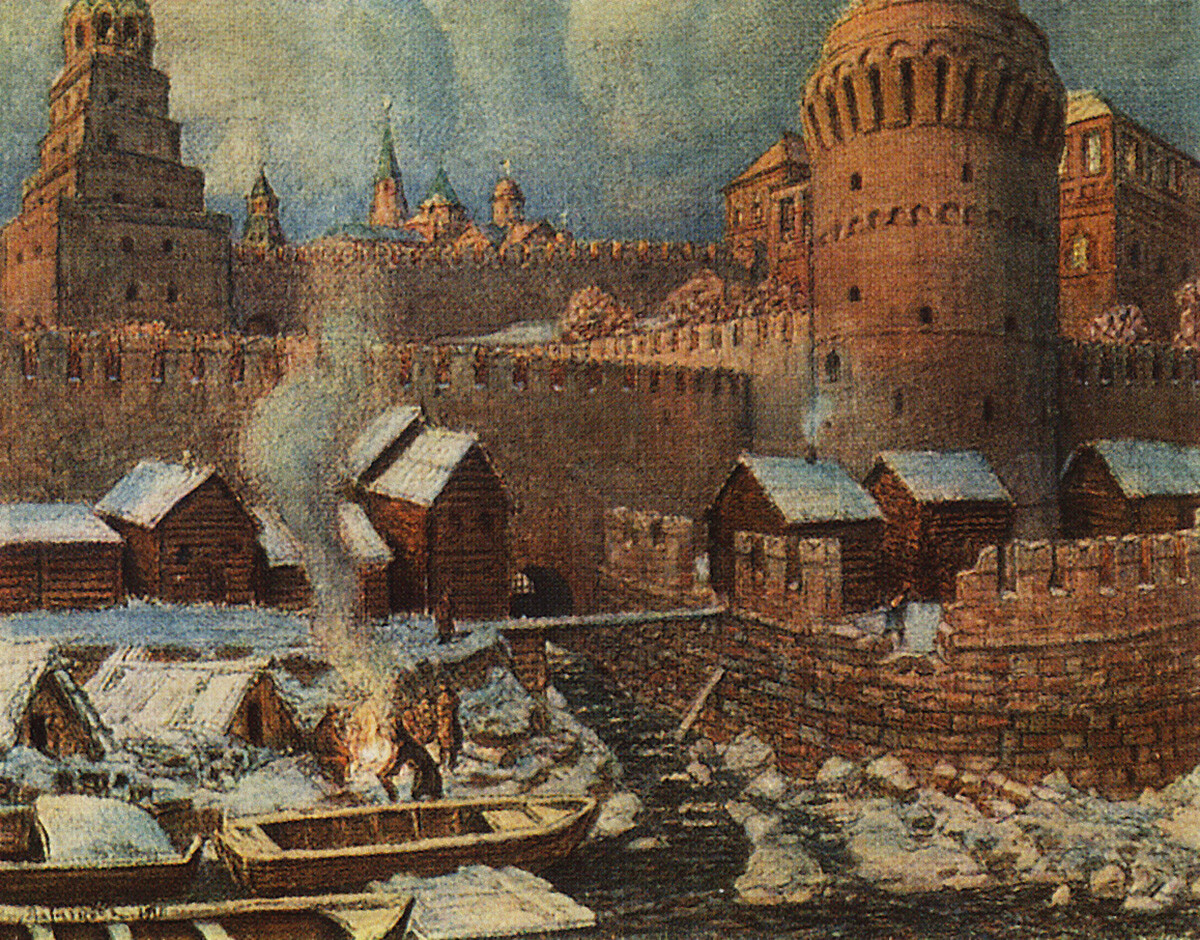 However, as the city population went up, the river was increasingly turning into a reservoir where sewage was discharged. It eventually became a hotbed of stench and unsanitary conditions, prompting the authorities to “hide” it underground. In 1819, the river was locked in a three-kilometer underground tube, with gardens planted on the vacated plot of land.  Yet, even today, one may hear the sounds of the “hidden” river. The air shaft of the Neglinnaya’s old underground sewer (a new one has since been built, while the old collector functions as an emergency one) leads right into the garden. It may be identified by a styled ancient sacrificial altar, which serves as a sort of a ventilation grid. 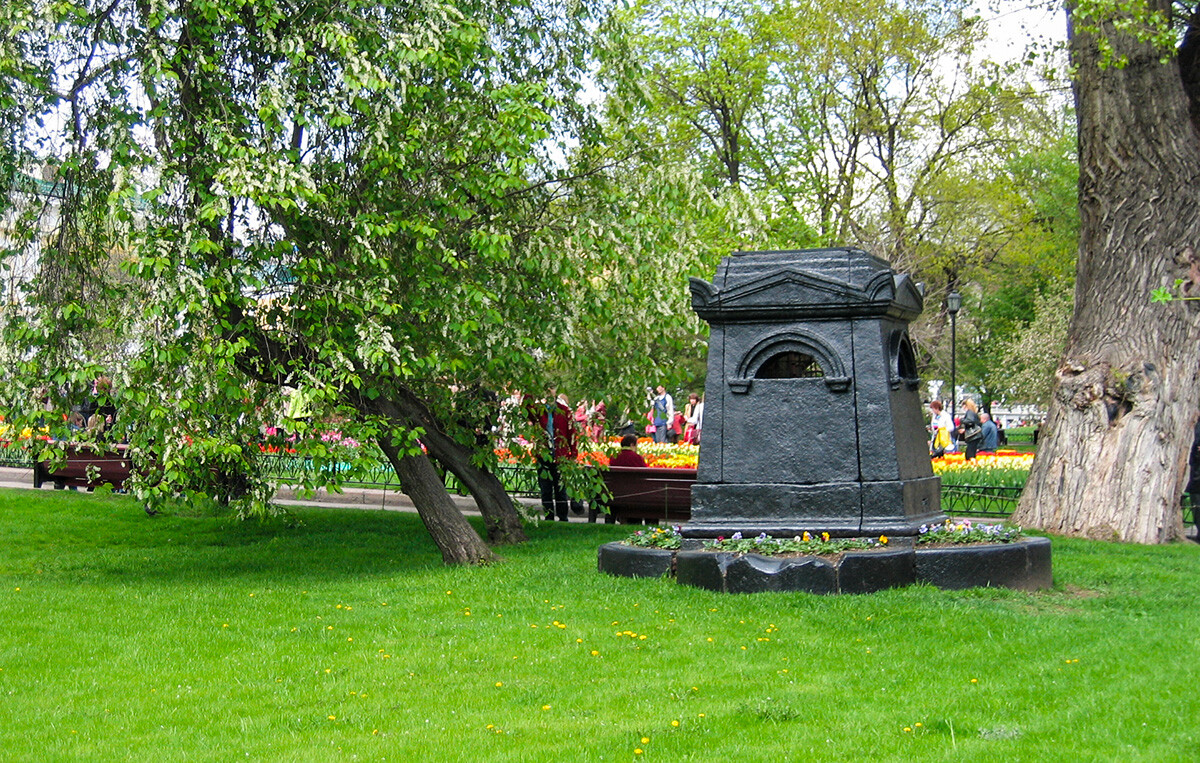 3. There are actually three gardens

We are now used to calling the place Alexander Garden, but, up until the 1980s, one could hear the plural form in its name: it was considered to be a 10-ha park ensemble made up of three gardens: the upper, the middle and the lower.

The upper and middle gardens are separated by Troitsky Bridge and connected with an arch. The middle garden was opened to the public a year after the upper one - in 1822.  In the 16th - 17th centuries, the State Apothecary Garden was located there, where medical herbs would be grown before being taken to the Apothecary Chancery - the body in charge of all pharmacies.

The lower garden, which is merely 132 meters in length, is the smallest of all. It lies between Borovitskaya Tower and the Kremlin Embankment. Having no walking alleys there, it has been closed to visitors since 2017.

4. The Italian grotto was made of the ruins of buildings destroyed by Napoleon 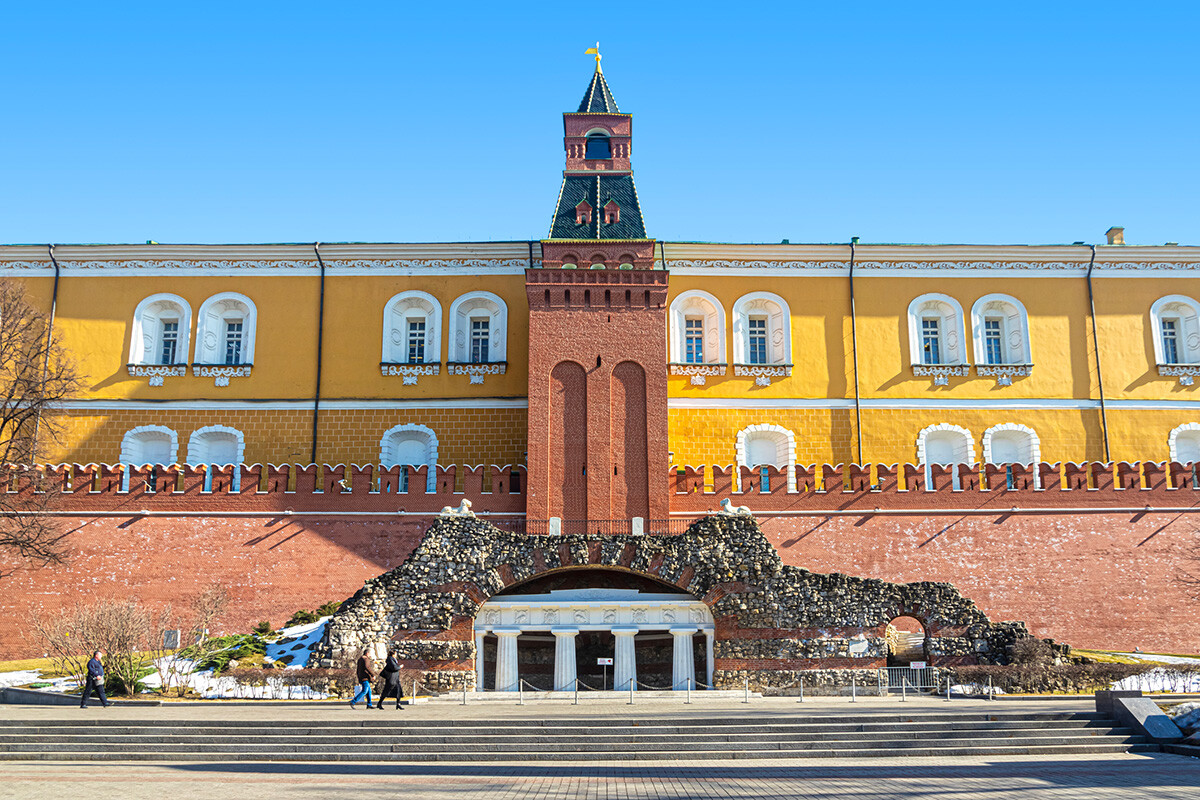 Back in 1821, the upper garden saw a grotto with a self-explanatory name - ‘The Ruins’ (otherwise known as the ‘Italian grotto’) - built in its center. The monument, which symbolizes Moscow rising from the ashes, was erected on an artificial hill made of rubble from Moscow buildings ruined by the French army. 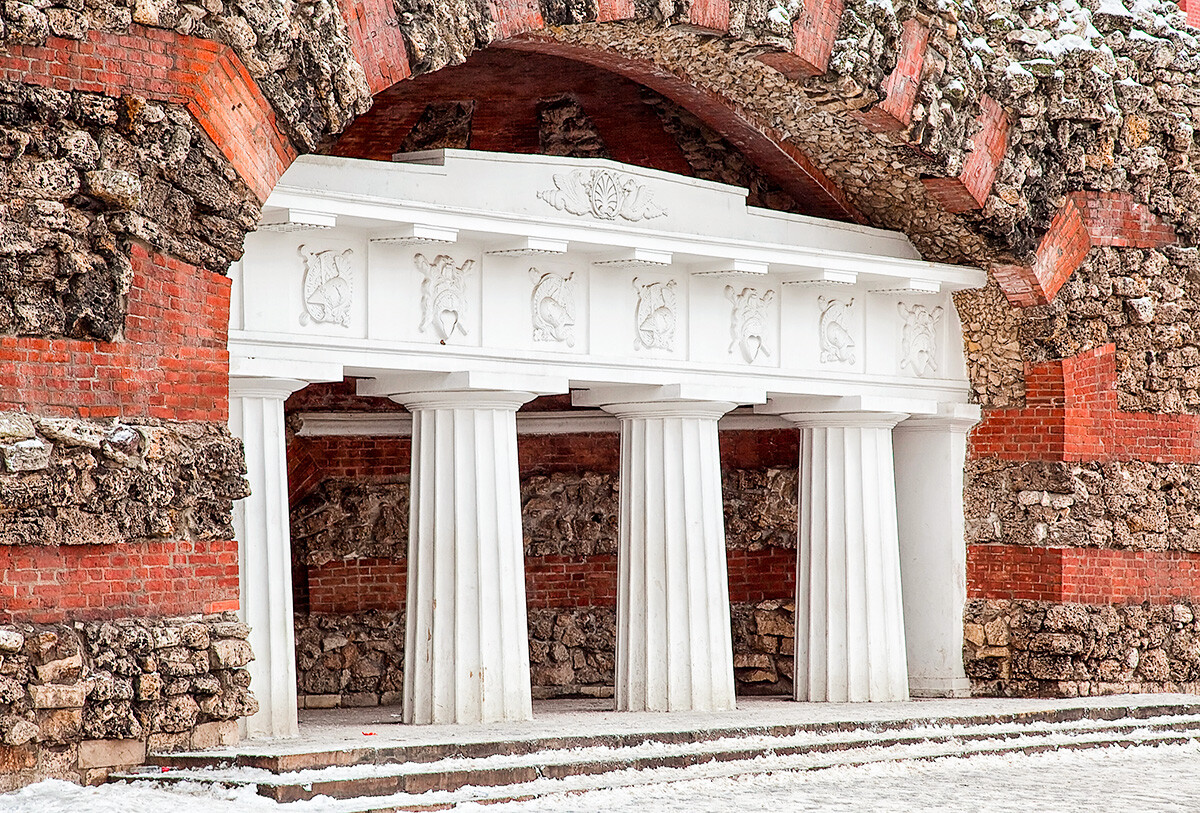 The grotto was designed by Joseph Bové, the Russian architect of Italian descent, who led the reconstruction of Moscow after the 1812 blaze. His projects included the city’s major landmarks: the whole of Alexander garden, the Bolshoi Theatre and the Triumphal gate on Tverskaya Barrier (Zastava) among others. 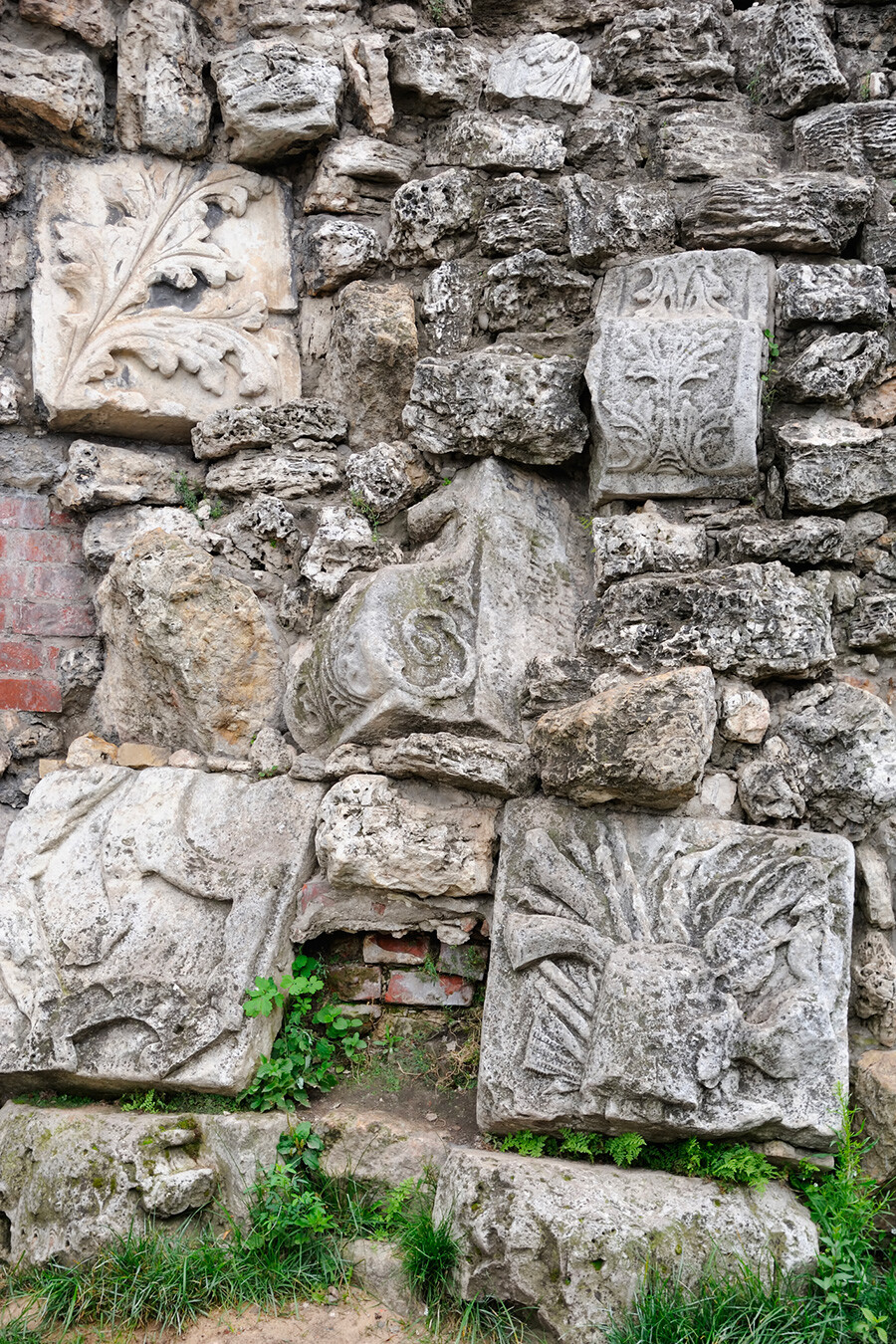 5. There has been a bed of honor for over 100 years there

The main landmarks of Alexander Garden are the Eternal Flame and the ‘Grave of the Unknown Warrior’ memorial, where the remains of soldiers, who defended Moscow in 1941, have been reburied. “Your name is unknown, but your deed is eternal,” reads the granite slab in the center of the monument.

The soldiers’ remains were reburied there in 1966, on the 25th anniversary of the German troops’ defeat in the Battle of Moscow. Prior to that, they rested in the bed of honor, at the 41st kilometer of Leningradsky Highway, where the most fierce battles had taken place. It was decided to relocate the remains to Alexander Garden because, at the time, it was already a burial place for those who had died for the 1917 revolution. 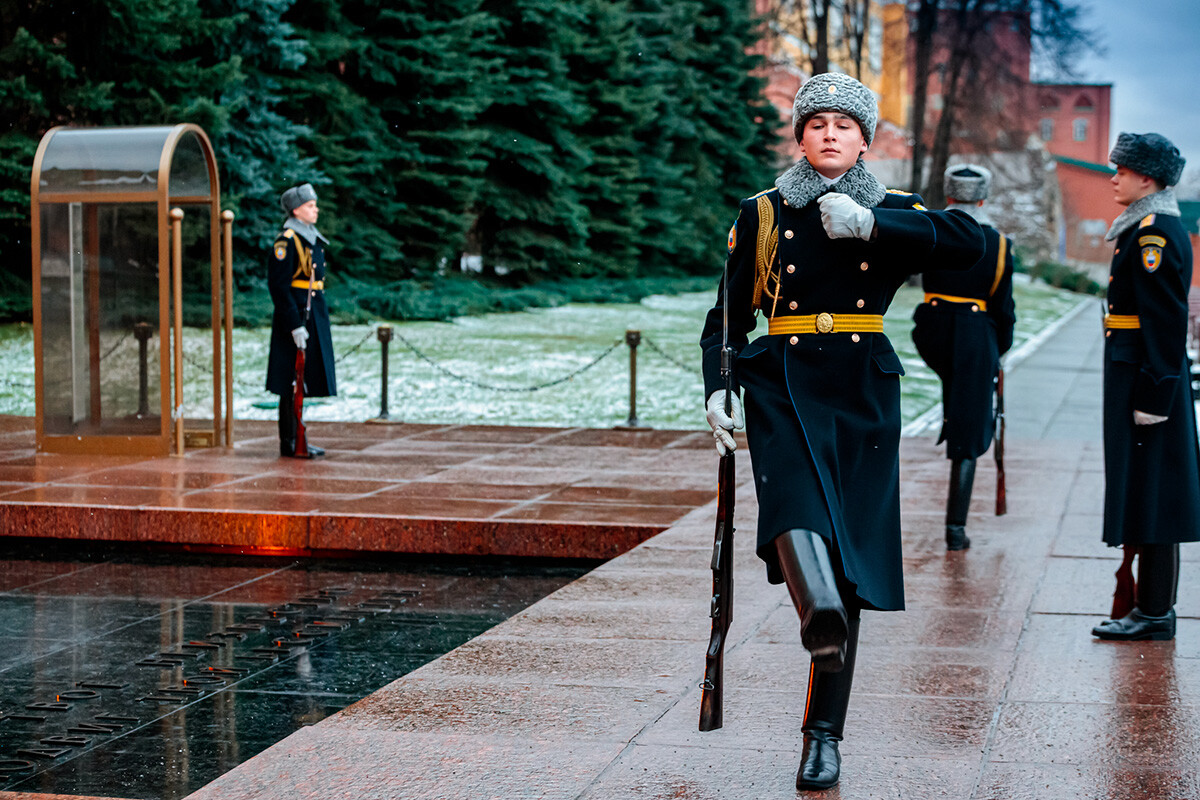 Since 1997, the memorial has been patrolled by the Presidential Regiment’s guards of honor. Every hour, the change of guards is accompanied by a special ceremony, which typically attracts large numbers of spectators.