Alexey Druzhinin/Sputnik
The main square of the country - a stage for historical and cultural events, the collection of the most iconic attractions, a place for shopping and more. We gathered everything about Moscow’s Red Square in one place.

Without a doubt, the majority of people who visit Moscow for the first time, have it on their agenda – the most famous square of Russia.

What’s located on the Red Square?

The distance between the entrance to the Red Square from the State Historical Museum side and the Kremlin Embankment is slightly more than 700 meters. A leisurely walk along it takes on average about 15-20 minutes. And yet, a large number of world-famous attractions fit within such a compact territory. 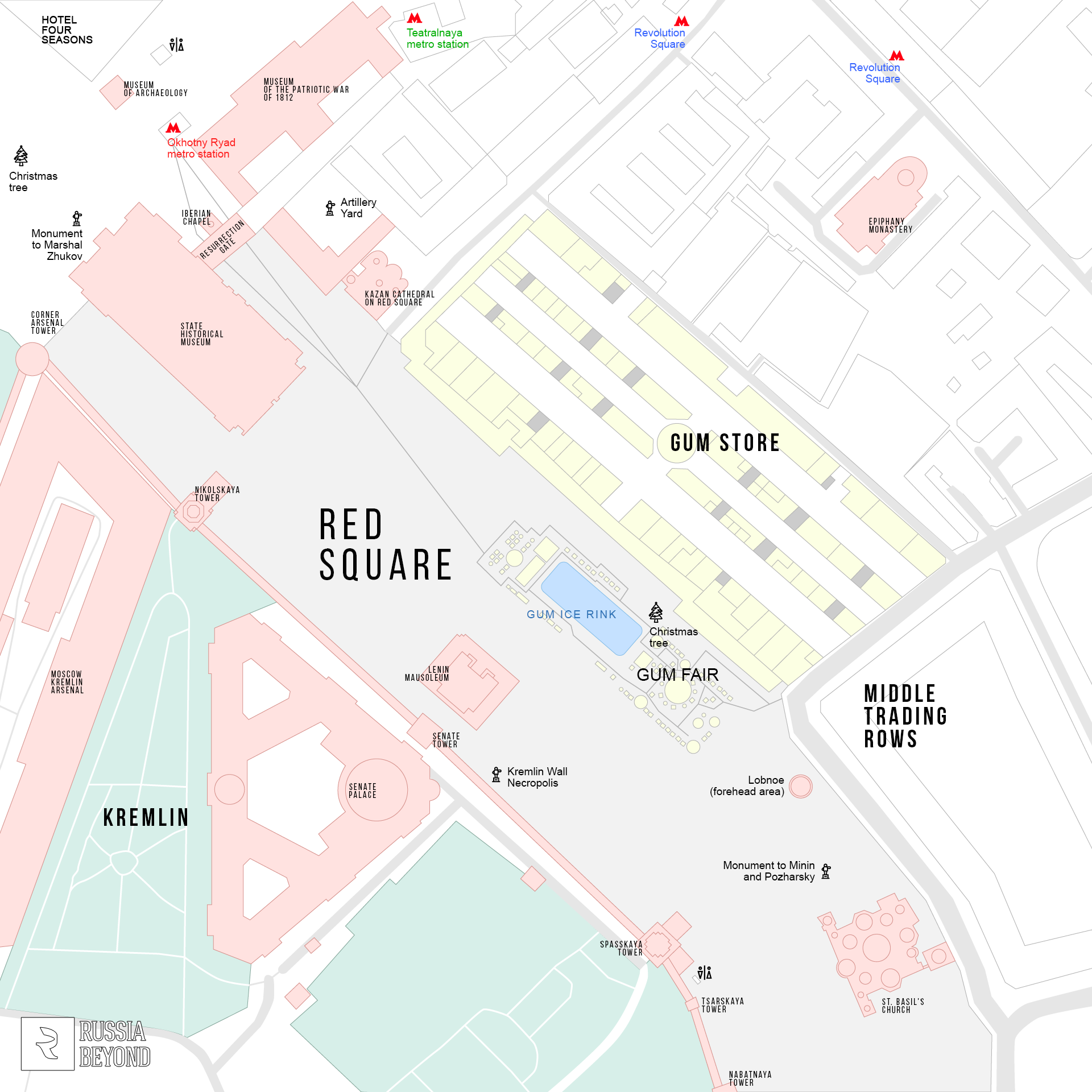 One of them is the colorful, many-domed  Saint Basil’s Cathedral, which appeared during the period of 1555-1561 in honor of Moscow’s victory over the Khanate of Kazan. The cathedral is shrouded in  mystery and legends, the majority of which are about its construction and its commissioner – Ivan the Terrible. 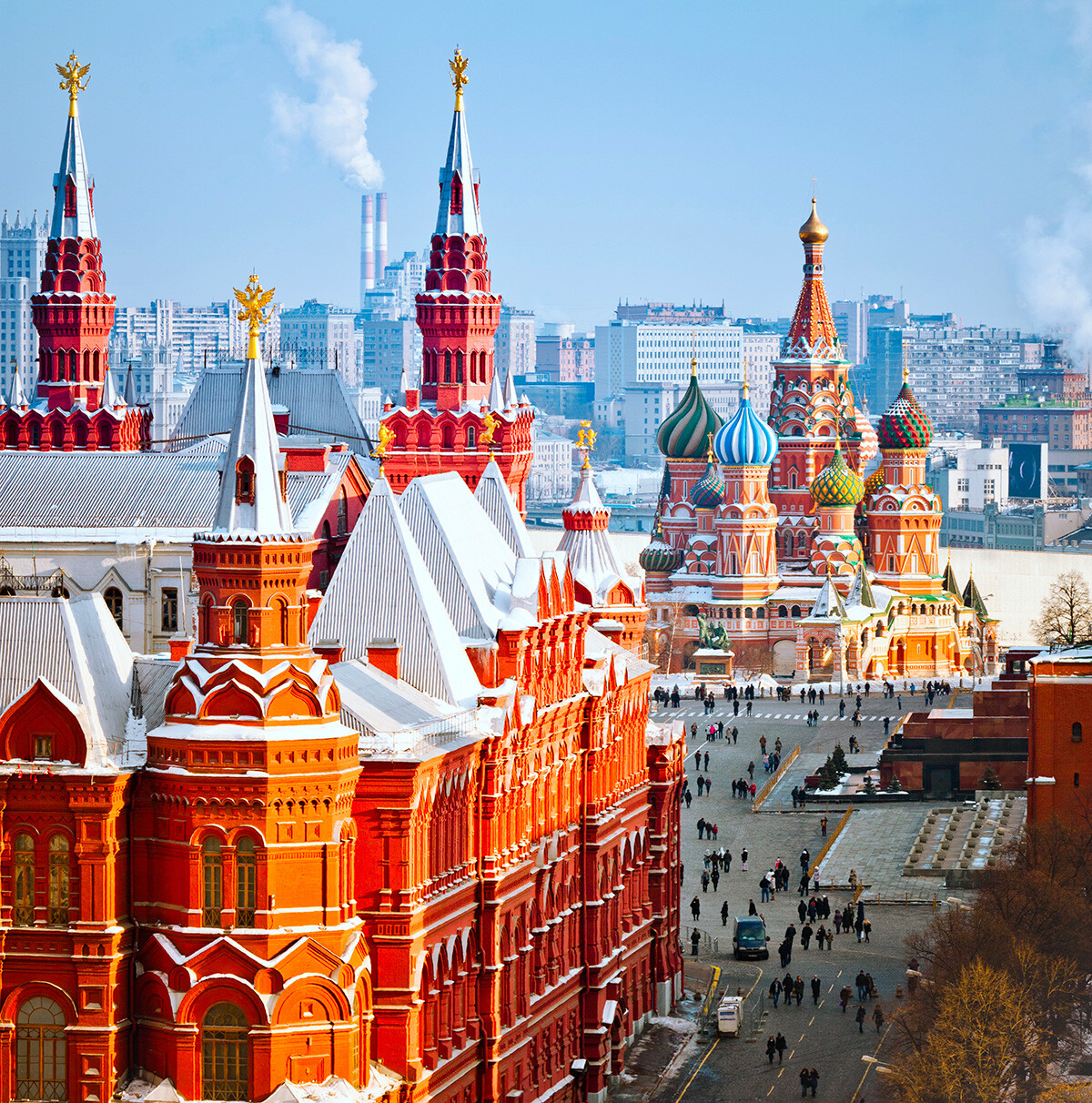 Lenin’s Mausoleum appeared on the Red Square (however, not with its modern look) in 1924. Before it, the Alevizov Moat stood in its place, where lions were kept under Ivan the Terrible’s rule (read more about it in  5 things that were once in place of Lenin's Mausoleum). But, ever since the Soviet leader found his peace on the Red Square, the Mausoleum has been the  target of heated discussions. But, as long as it stands where it is now, anyone can visit it:  here we detail how and when to do it best. 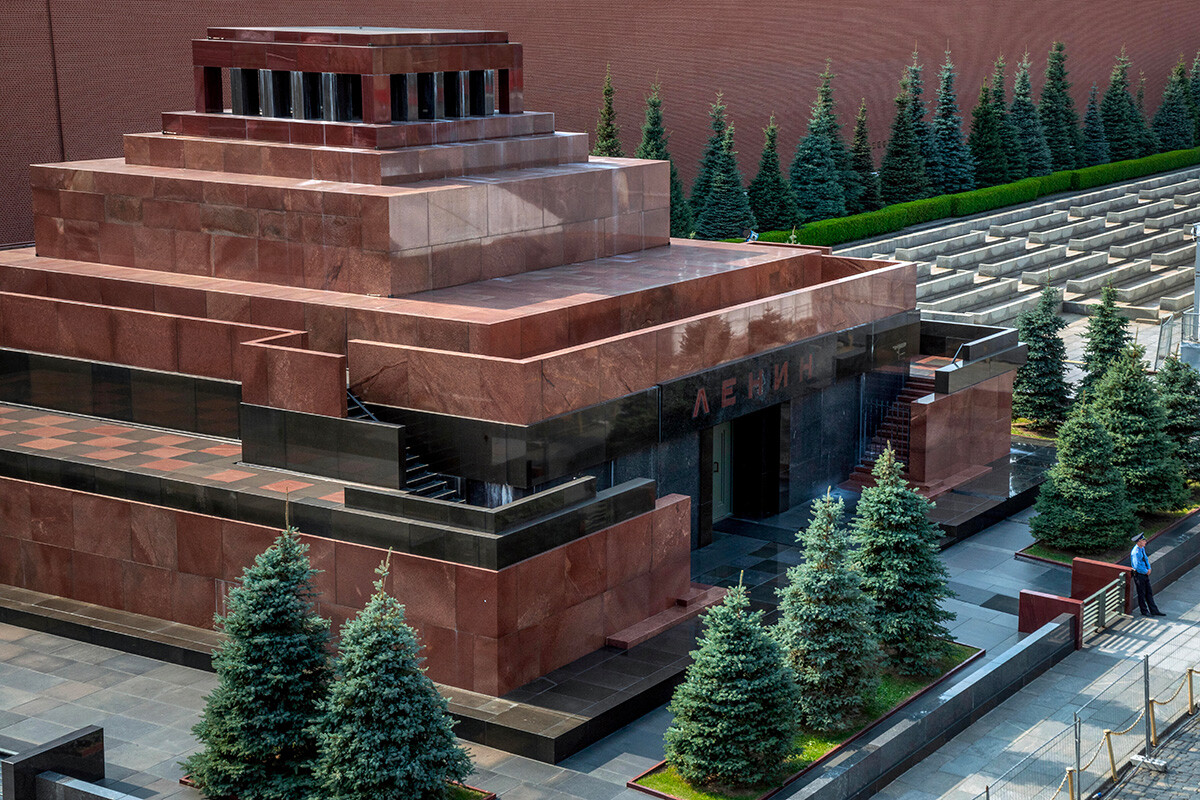 Right behind the Mausoleum, you will find the red brick wall of  the Moscow Kremlin and its most iconic symbol - the Spasskaya Tower. From a very early age, every Russian knows the clock of the Spasskaya Tower, since the strikes of this very clock mark the beginning of the New Year. However, it’s not just a holiday symbol. Over the years of its existence, the Spasskaya Tower has had many roles, including a mini-fortress, holy gates and even a prison. 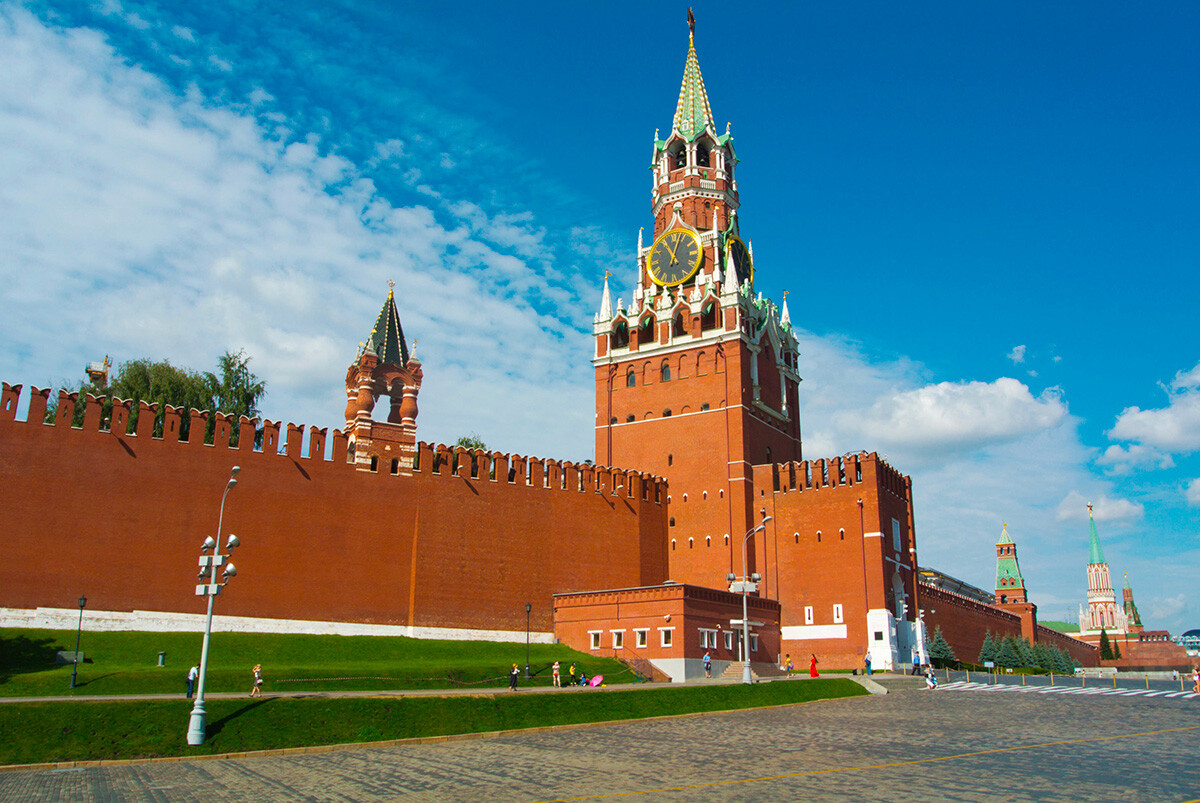 Next to another tower, the Nikolskaya Tower (and right across from Saint Basil’s Cathedral), stands an imposing dark-red building that looks as ancient as the Kremlin itself. However, its look is deceiving: in reality, this building appeared here only at the end of the 19th century and was designed in the neo-Russian style not to look out of place. Right now, this building is occupied by the State Historical Museum and we know at least  5 reasons to visit it. 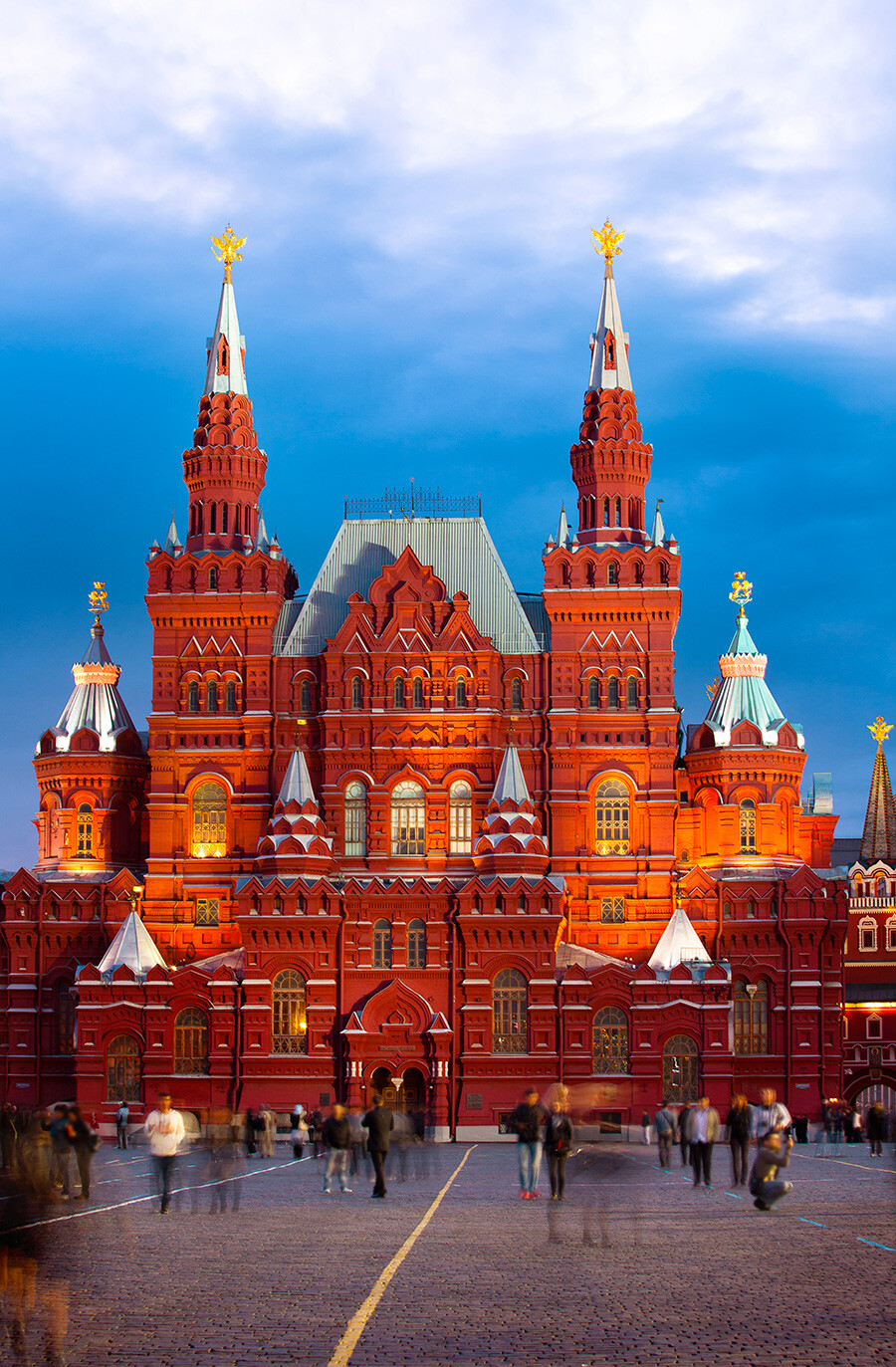 Finally, on the fourth side of the Red Square, which makes it a simple quadrilateral, the GUM (Glavny Universalny Magazin; ‘Main Universal Store’) is located – the flagship department store of Russia with its luxurious boutiques, souvenir stores and, of course, a very rich history. 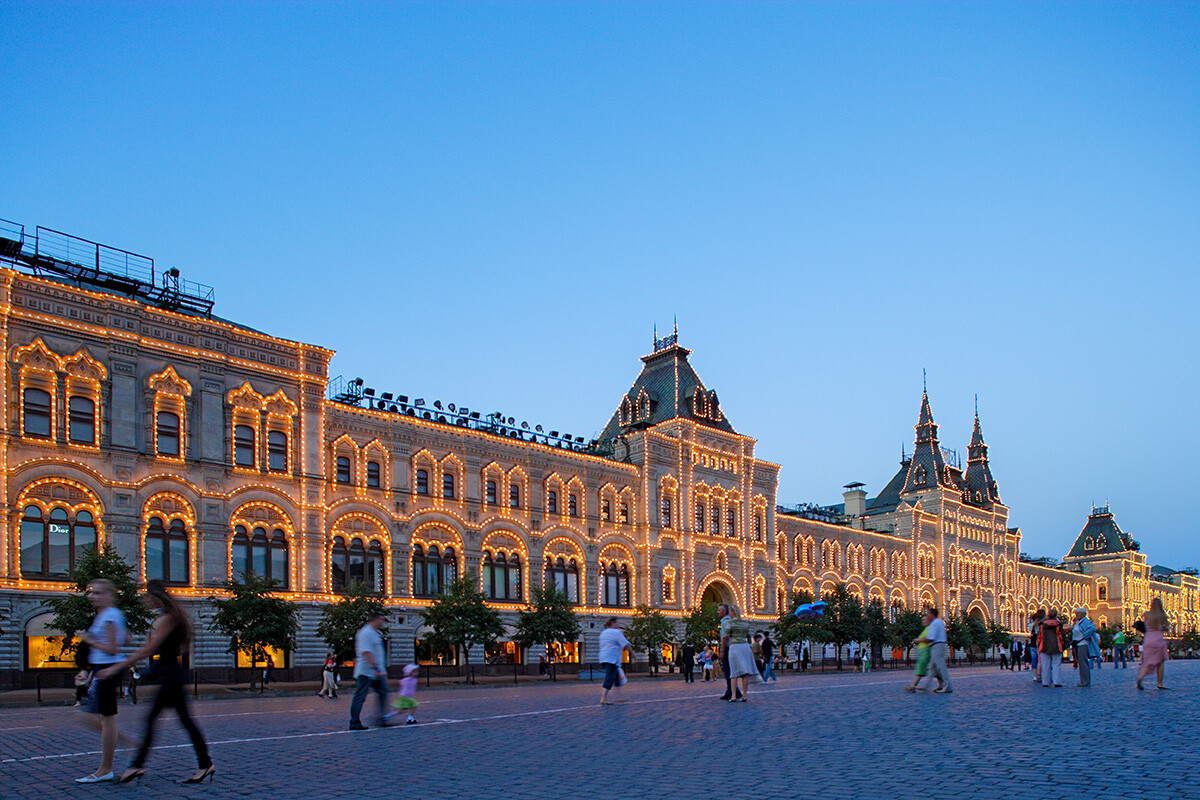 When did the Red Square appear?

The square has existed from at least 1434 (historians are still debating if it was “created” or appeared naturally, since it became a market and the place for meetings). Before, there was a large field in its place right next to the Moscow fortress (which later would be named the Moscow Kremlin). 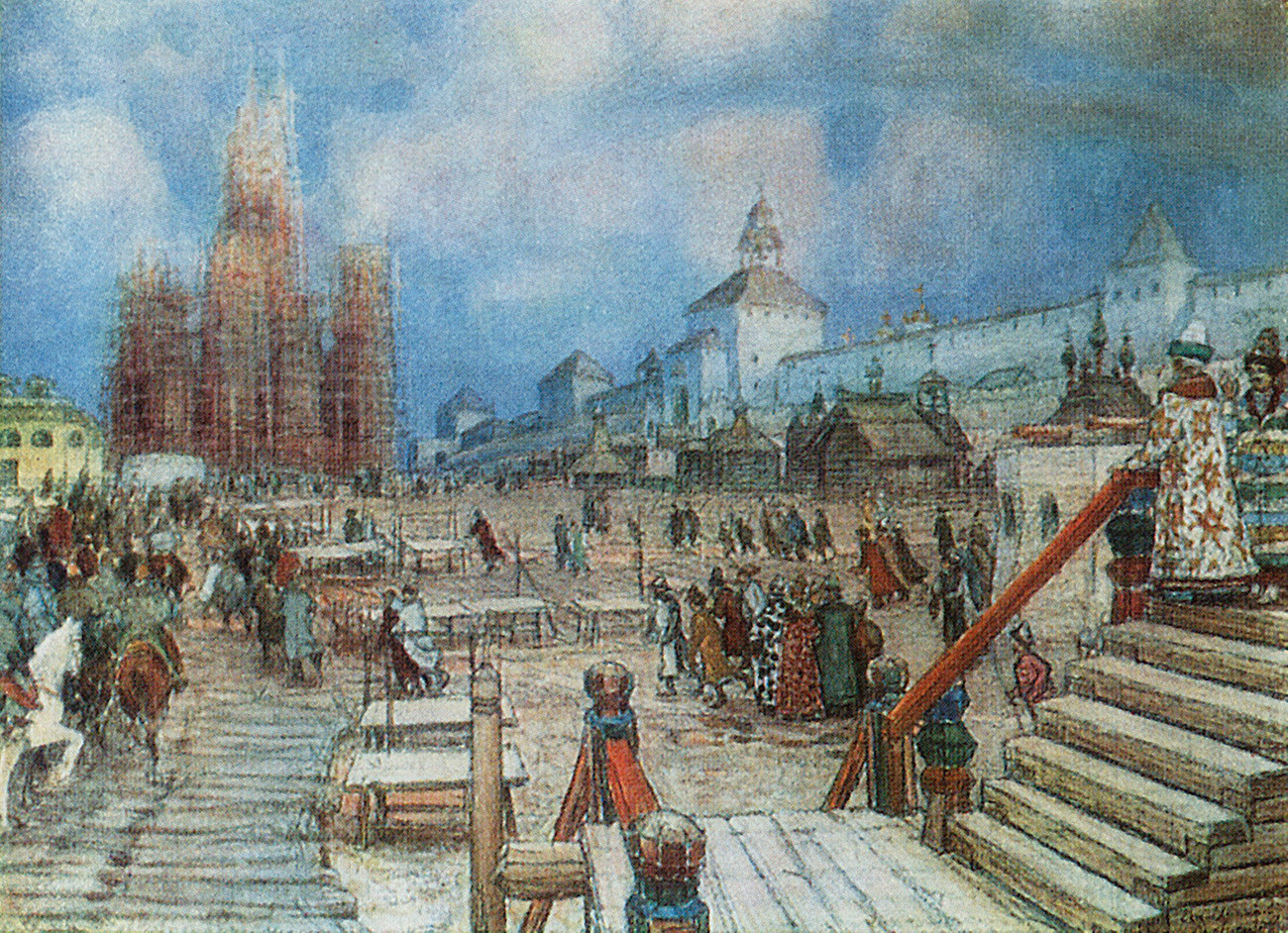 "The Red Square during Ivan the Terrible's reign" by Appolinary Vasnetsov.

As the fortress and the city grew, a settlement formed next to the fortress walls. And it needed a market. What happened next? Find out in the article  How did the Red Square appear in Moscow.

The most obvious option would be to suppose that it’s called ‘red’, because it’s located next to the red walls of the Moscow Kremlin. But, this is incorrect (and the Kremlin was not always red). And even the theory that it’s “red” (krasnaya in Russian) from the word ‘beautiful’ (in old Russian, krasnaya also meant beautiful) is incorrect. 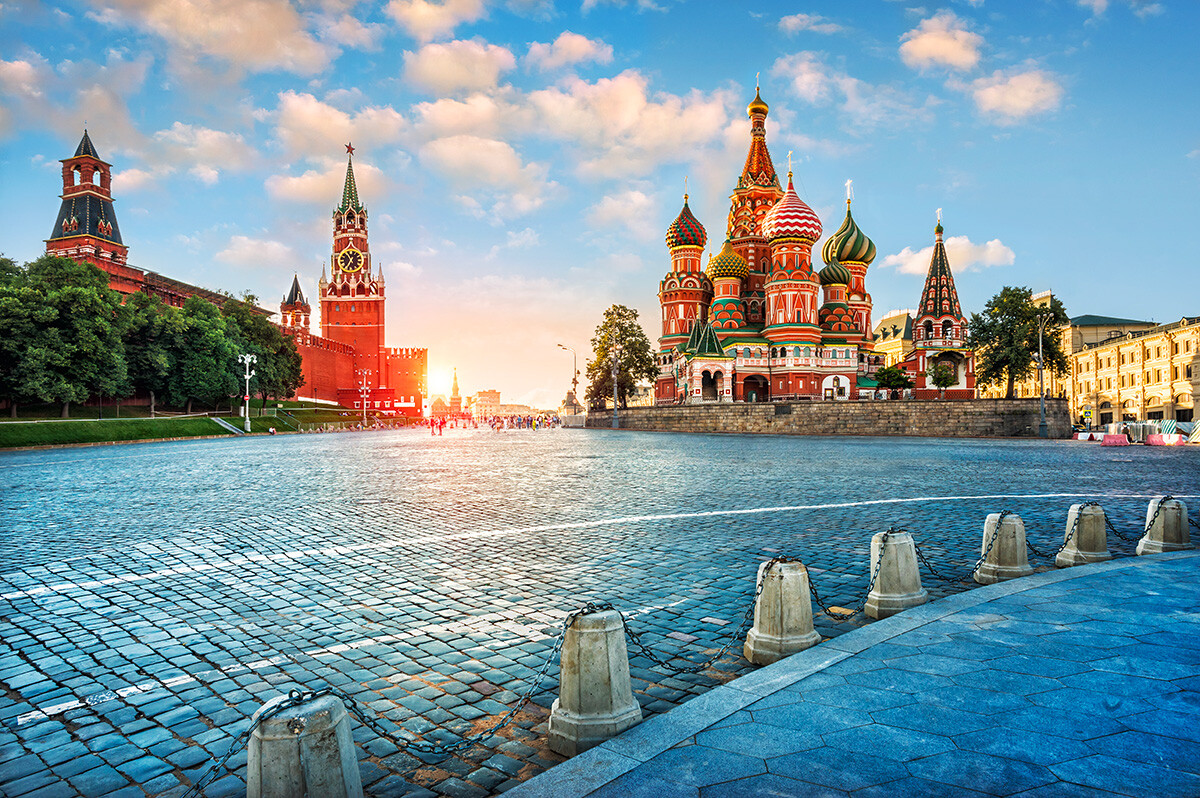 Here’s the real reason it was called ‘red’: the red color was traditionally the color of authority and the staircase leading to the Palace of Facets – the main reception and banquet hall of the Moscow tsars - was painted red. The tsar himself walked out to a red porch during important events. That’s why the square where this porch led was called ‘Red’.

FIND OUT  who lives in the Kremlin in our modern day.

Who is buried on the Red Square?

If you heard that right in the heart of Moscow, right on the Red Square, there’s a cemetery, it’s not too far from the truth. From 1920 to 1985, important Communist figures, famous revolutionaries and just generally significant people for the Soviet Union were buried there. Among them - Joseph Stalin, Marshal of the Red Army  Georgy Zhukov, writer  Maxim Gorky, astronaut  Yuri Gagarin and the father of Soviet astronautics,  Sergei Korolev. Mass graves with the remains of soldiers who died for the Revolution are also located there. 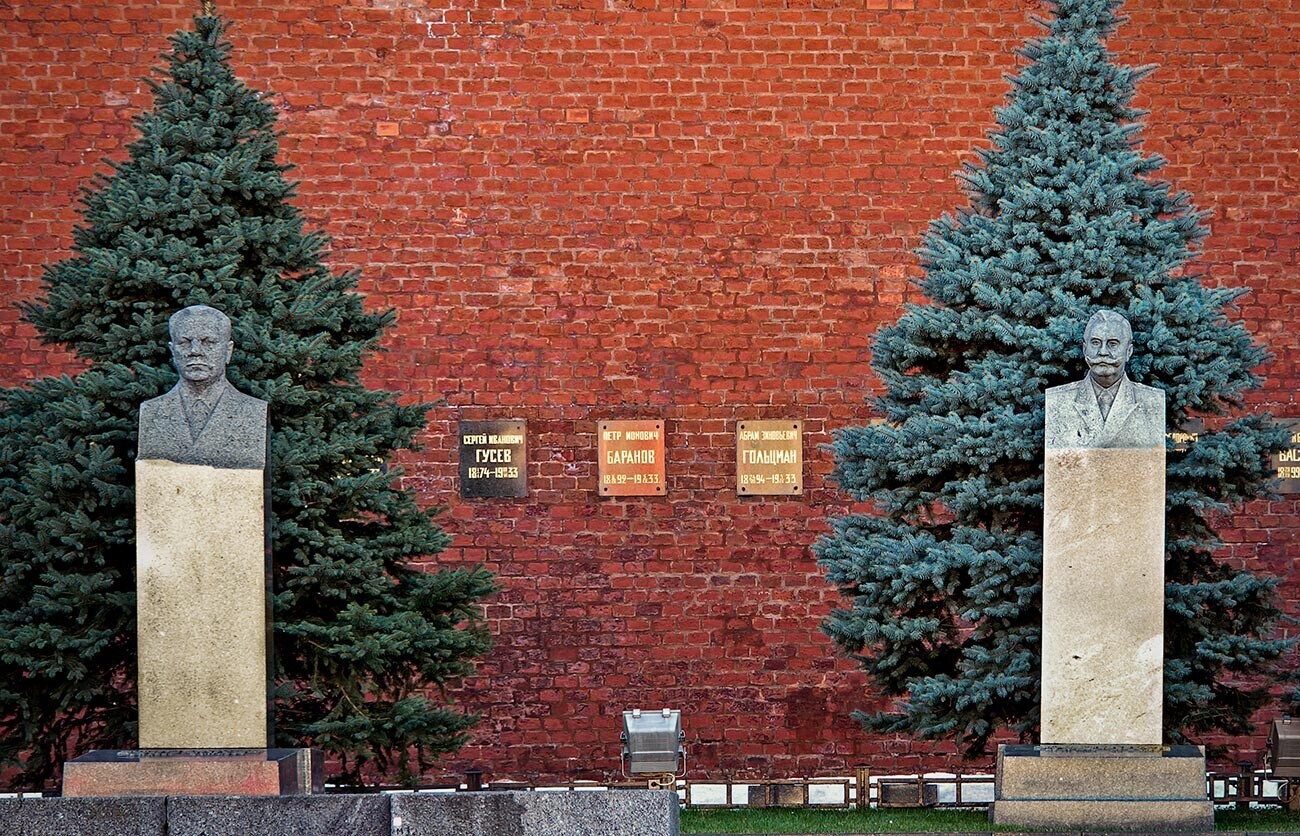 Overall, about 200 people are buried next to the Kremlin wall from the side of the square, with Western politicians also among them.

READ MORE:  Who are the foreigners buried with honors on Moscow’s Red Square?

Of course not. The place where history was made over many centuries couldn’t stay the same. In the 19th century, it was still transport-accessible and even had a tram line run through it! The Red Square had its most major reconstruction under Stalin in the 1930s, during the reconstruction of Moscow. Many photos of  how the Red Square looked in different years have survived. 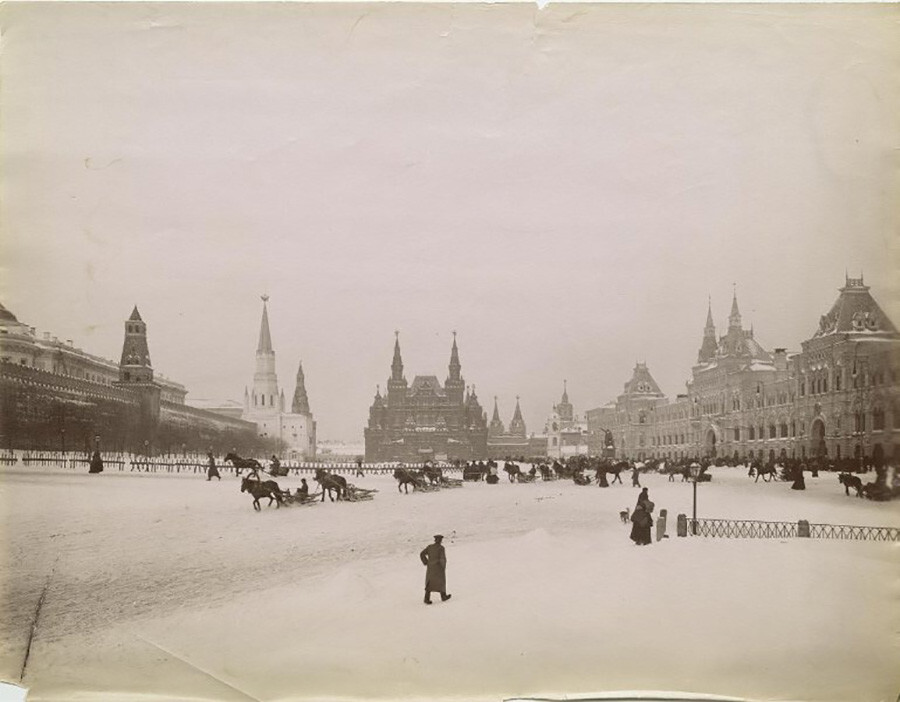 But, it’s even more amazing how it could have looked if some Soviet plans had been put in action! How’s the idea of demolishing everything in an area of about 500,000 square meters (an area larger than the Vatican) to build a giant necropolis instead of everything we have now? Thankfully, someone also thought it wasn’t the best idea.

What happened on the Red Square?

Since the Middle Ages, this place has been the focal point of cultural and political life, as well as most unsightly events. Under Tsar Aleksey Mikhaylovich, the Red Square was the place for “family courts” (if someone violated the law, they were first reasoned with within their family circle; if that didn’t work - they were then brought to the square, where the same was done in front of all people).

In 1917, the Red Square hosted mass church services before sending troops to World War I. 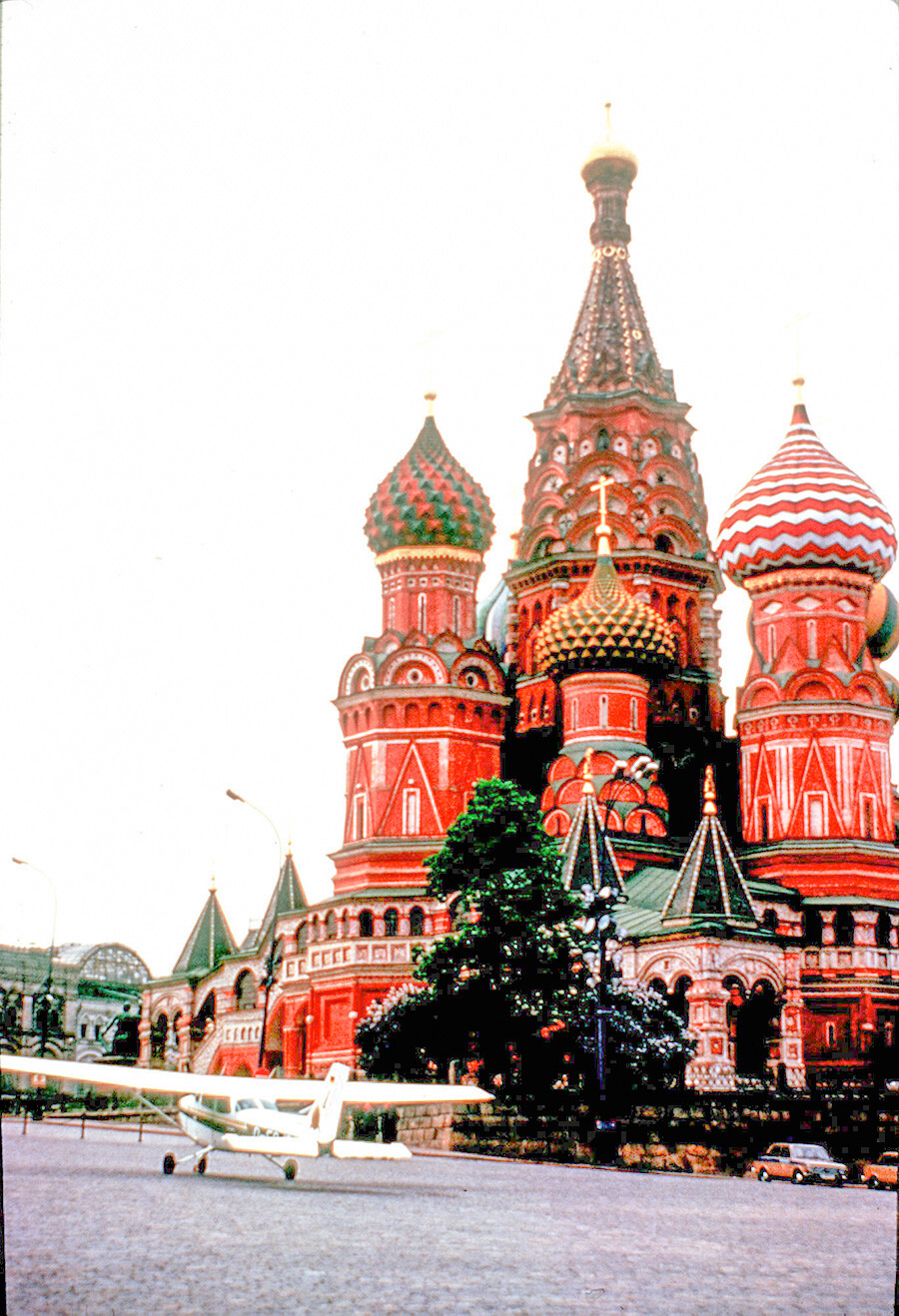 Under the Bolsheviks, the place became the main arena for political meetings. From a wooden tribune, Vladimir Lenin would address crowds. In 1945, the first Victory Parade was held on the Red Square, when the Nazi flags were thrown onto the ground. The funeral procession of Stalin (that caused the  death of dozens of Soviet people) also happened here, when the body of the leader was put in the Mausoleum next to Lenin.

In late Soviet and Russian Federation years, the Red Square continued to be an arena for loud statements, although it became harder to do so. We highlight the  crazy events that happened at this place (from performances with nailing one’s genitals to the paving stones to the landing of a German plane).

Today, book festivals, fairs, the annual May 9th Victory Parade and concerts are held here; in winter, this place turns into a Christmas fairy tale: a skating rink is set up and everything sparkles with Christmas lights. It’s from the Red Square where you can turn onto Nikolskaya street - one of the most decorated and brightly lit pedestrian streets of Moscow.