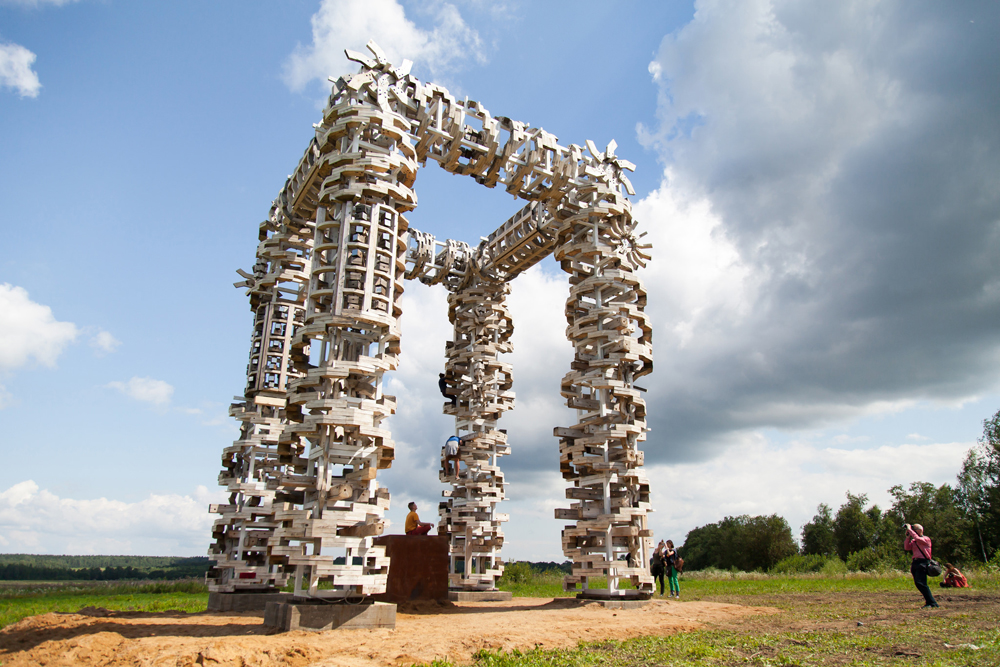 'White Gates' is a triumphal arch and the entrance to the landscape park. Photo: ‘White Gates’ by Nikolai Polissky.

Julia Abzaltdinova
The 11th international Archstoyanie festival of land art, the brainchild of Russian artist Nikolai Polissky, took place on July 22-24 in the village of Nikola-Lenivets in the Kaluga Region (140 miles southwest of Moscow). This year the theme of the festival was “Shelter.” RBTH has chosen eight of the most interesting land art installations on show.

The main object by the festival’s founder, major Russian land art artist Nikolai Polissky, who has been living in Nikola-Lenivets for many years, White Gates is a triumphal arch and the entrance to the landscape park.

The architectural bureau Wowhaus built a bridge connecting the village of Zvizzhi with the “Versailles” landscape park.  The walkways can be adjusted, forming places to relax and philosophize, and a tin mesh, which is filled with soil, has been thrown over the swamp next to the bridge – gradually it will be overgrown with shrubs. In this way, modern technical ideas coexist in harmony with nature.

Artists Irina Korina and Ilya Voznesensky have built a huge cone in the forest. The metal skeleton of this 5-meter-high-construction is covered with police defensive shields. However the main part of the project is a person: Entering the cone, you seem to have come to the center of the universe or to have become this center yourself.

This sculpture for living, where one can hide from any troubles, was created from glass fiber and composite materials. Like an isolation tank, Dmitry and Yelena Kavarga’s object creates a protective cocoon around a person, screening them off from the world.

This installation by the Komitet Apollona group and the architectural bureau Patkonen Projects is aimed at harmonizing the surroundings. Inside is a totem pole with a “wishing -wheel.”  Video-mapping projected on the construction serves as a visual supplement.

It is also possible to find shelter in this bunker, created from a Mercedes Geländewagen, which is buried in the ground up to its roof, which has grass growing on it. The result is a well-disguised hiding-place with just one entrance – through the hatch in the roof. The auto-bunker is the idea of the Archipoint bureau.

‘House of the Homeless’

The artist Pavel Suslov has created a temporary shelter from easily accessible and familiar materials – canvas on stretchers. What is more, this is not just a sculpture, but a “work in progress.” Each of more than 250 pieces can be removed to paint a new work on it. When all the canvases are ready, the installation will be dismantled.

‘House of the Homeless’ by Pavel Suslov. Source: Julia Abzaltdinova

The safe haven for two has been created by Dmitry Zhukov in the form of a funnel or a seashell, hiding Adam and Eve from the future and danger.