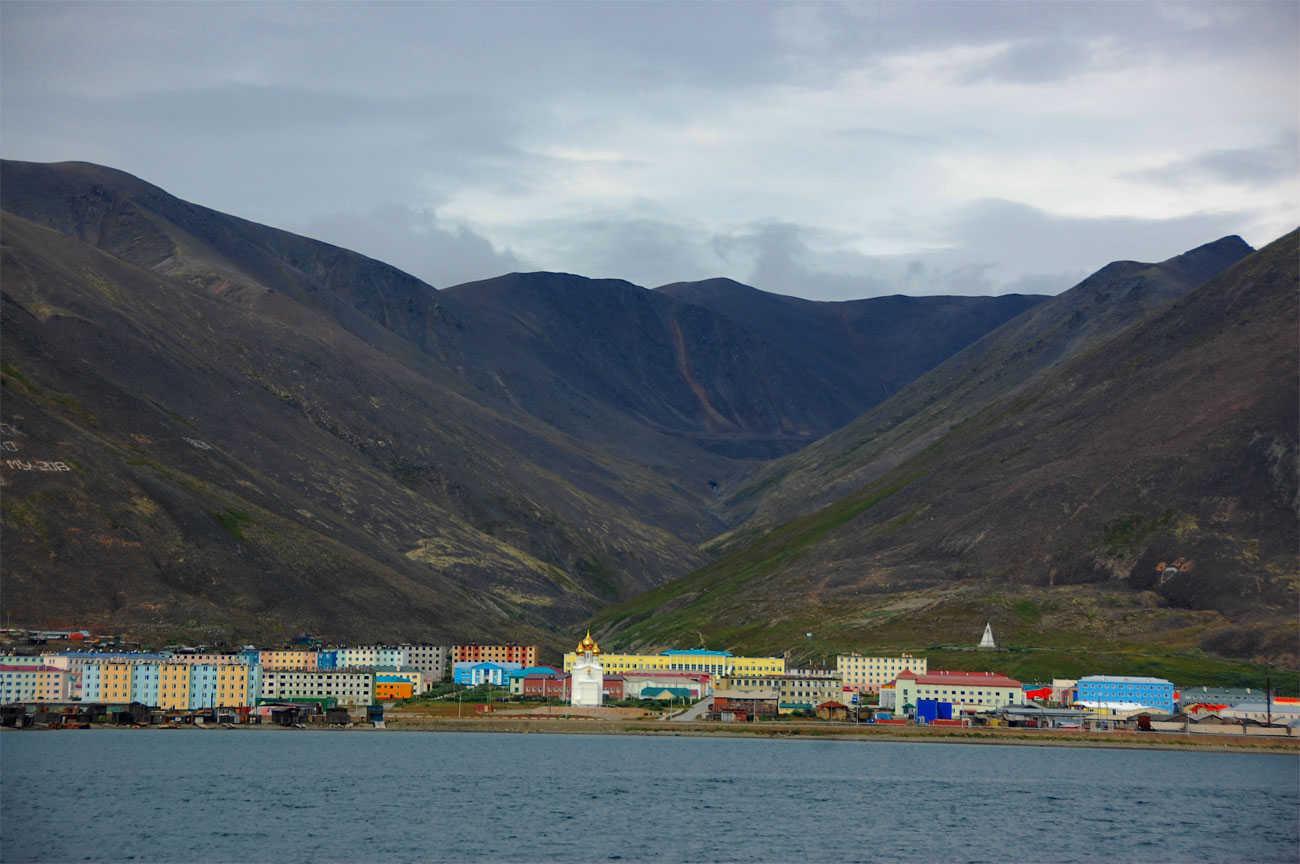 The tiny village of Egvekinot.

Jet lag - 0, Maria - 1. I guess it's something about that fresh Arctic Ocean air and the gentle rocking of the Spirit of Enderby (a.k.a. Professor Khromov) that made overcoming the 9 hour time difference with Moscow doable in just one night. Also, some sunny intervals in the morning hours infused us with Vitamin D and woke us right up.

The first thing I did was look out through the little porthole of my spacious cabin at the landscape, which seems to get more and more breathtaking. I was recently in Iceland and I can best sum it all up as Iceland on steroids: rugged mountains with bits of glacier lazily tucked between the faults, sparse plant life along the shores and then, of course, the tiny village of Egvekinot in the middle of nowhere with its colorful buildings that provide a stark contrast against the gray tundra backdrop.

Day 2 on the boat started with an information overload. After a hearty breakfast, a marathon of briefings began: first we were briefed on the use of Zodiac boats (the sturdy motorized boats that get us from the Spirit of Enderby to all our landings), then on general safety on board together with a very loud lifeboat drill and finally we were given a run down of our program in Egvekinot, a  village with a population of roughly 3,000. Without further ado we hopped into our Zodiac and whizzed away towards those colorful buildings and the shiny golden domes of the village's church.

You know how they say Russians never smile and don't like strangers? Come to Egvekinot and the locals will dispel this myth. As a group of mostly foreign tourists walked down the empty but well-maintained roads of Egvekinot, locals rushed to their windows to have a look and welcome us with enthusiastic waving. The proud staff at the local museum was positively thrilled to share all they knew about Egvekinot with their guests.

Perhaps this joy was still fresh from the weekend's celebration: Egvekinot celebrated its 70th anniversary on July 16! On this day in 1946 the first vessel sailed into Kresta Bay. Yet on a more serious note, if you dig deeper, Egvekinot's history is a sad one and bears testimony to the unnecessary cruelty of Stalin's Gulag system, which was well documented in the village's local museum of nature and history.

Of the 1,500 people on board that vessel, 1,200 of them were political prisoners sent to the Gulag to build a port to supply the rich Lul'tin mining complex some 120 miles inland. Prisoners also constructed the road to the mine. All of this, as you can imagine, was done in horrendous conditions. At one point, Ludmila (our tour guide around the museum) even said that she would rather notgo into the gruesome details. I don't really want to either, but here is just one example to show the horrors that went on in the very place we were standing today: if a prisoner fell sick he would most likely have been led outside to freeze to death so as to not to infect others.

On a different note, the area played a very important role in the Lend-Lease program between the U.S. and the USSR. Several routes for the supply of military equipment from the U.S. to the USSR were considered but the one over Chukotka was deemed the optimal because there were no Germans in this area.

From Alaska to Siberia on a WWII-era airplane

This is why it was crucial that the Soviet government build the necessary infrastructure (namely air strips) in the shortest time possible. The one in Uelkal was built in just 10 months, and although the official government line was that it was built by paid workers and volunteers, everyone is certain that the lion's share was done by the prisoners - many of whom were political dissidents or Soviet soldiers who had been captured and imprisoned by the Nazis during WWII.

Since the Lend-Lease program finished, several meetings between the U.S. and Soviet pilots took place in this region. Altogether, it is estimated that 8,000 planes were delivered, while 117 planes perished.

Next up was a trip to the Arctic Circle on a six-wheel drive vehicle (one that was probably older than I am) up the road that was essentially built on bones. By the time we embarked on the 20-minute drive the weather took a slight turn for the worse and a cold drizzle began beating against our faces. Oh well, not too surprising if you are on your way to the Arctic Circle!

The gravel road took us along what I imagine the post-apocalyptic world would look like: rusty overground pipes meandering along the road, half-abandoned excavation sites scattered around the fields, derelict buildings standing idly and patches of colorful flowers attempting to return to life after whatever disaster took place. Also, a few of the expedition members even spotted a young brown bear leisurely roaming the hills and stopping to smell the blooming daisies - so those stereotypes about Russia are true after all!

It was a bit of a surreal feeling being one foot outside the Arctic Circle and one foot in. What was more surreal, however, was listening to the driver tell us that the local reindeer-herding Chukchi people that live some 2 miles further up the road have satellite dishes and pretty good 3G internet, all while I couldn't even manage to send a single photo to my editor the whole day I was here!

Locals, it appears, also enjoy coming to this spot as well for a dip in the very refreshing river, a bit of hunting and some summer shashlik (barbecue) action as evidenced by a special grilling device and empty vodka bottles.

On the way back to our Zodiac landing spot we stopped by a monument to the Gulag prisoners: a big cordoned -off rock along the gravel road. The drizzle intensified as we gave more thought to the atrocities that once happened here. It felt good to get back to the Spirit of Enderby and a hot cup of tea after such an information-filled day.

Tomorrow, off to the small reindeer-herding village of Konergino! Note to self: dress more warmly.