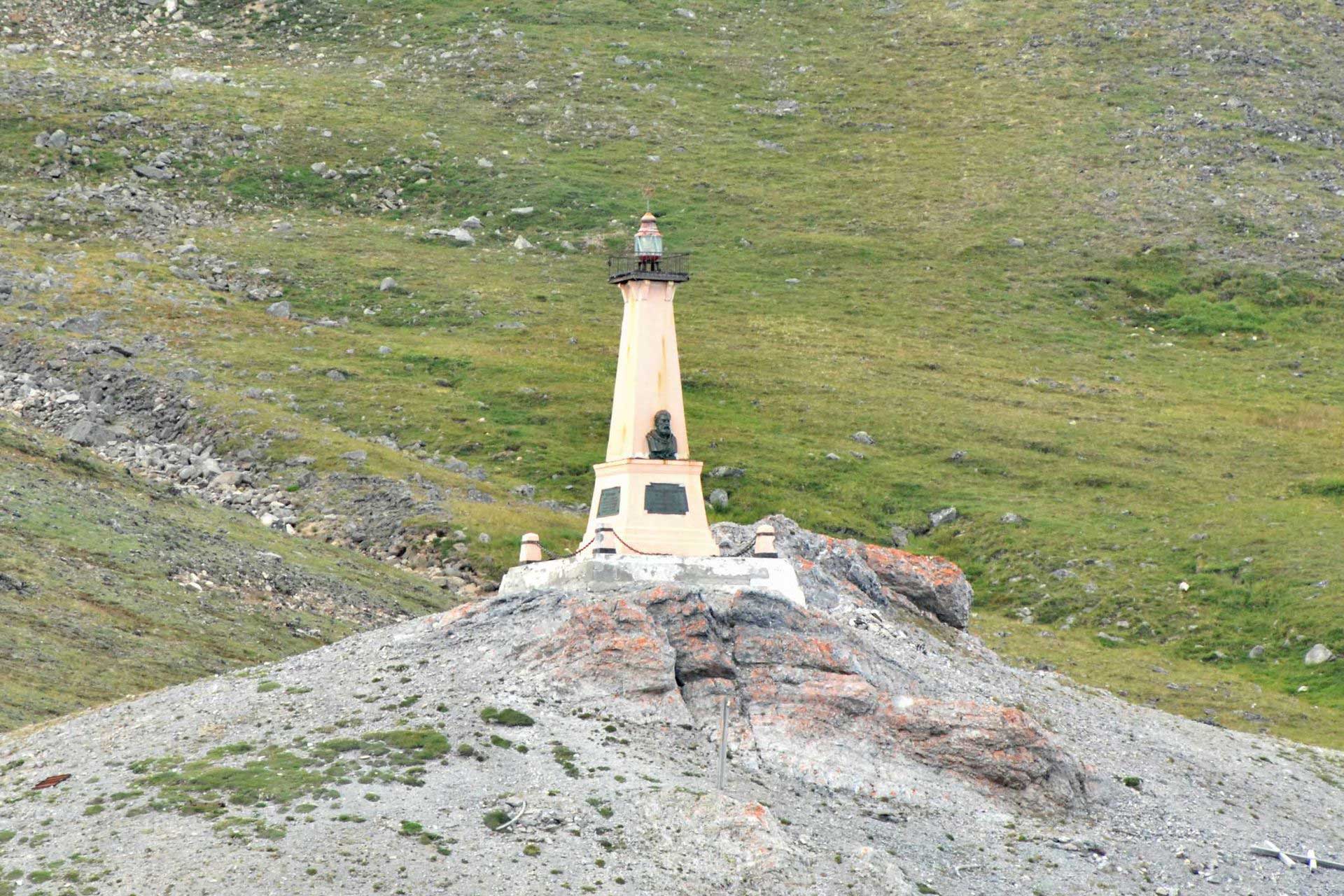 Early this morning we reached Cape Dezhnev, the northeastern most point of the Eurasian continent. The wake-up call was early by any standard, because if the weather conditions were favorable we would need to be able to mobilize very quickly to land on shore. As Rodney said, this will be the most difficult landing of the expedition.

This cape commemorates the accomplishment of the Cossack Semyon Dezhnev, who was the first European to sail through this strait in 1648 (80 years before Bering did). On the cape there is a lighthouse, a monument and the remains of a border guard base.

High winds were creating a spectacular atmospheric cloud around the cape, so I went outside to see this dramatic landscape. Although I was almost blown overboard several times, I managed to hang on and admire this stirring view. A rainbow created a lively arch over the cape and I could almost touch its end. Unfortunately, there was no pot of gold there.

There was quite a bit of uncertainty as to whether we'd be able to land or not due to sea conditions. To say it was choppy out there this morning would be a gross understatement, but with Rodney and co.'s masterful guidance, we landed safely on shore. The Zodiac ride was eventful, and not only because of the ice cold sea water splashing us and the sense of adventure: on the way we saw some picturesque caves, grottoes, cliffs, small waterfalls, piles of snow, the clearest turquoise waters and the real added bonus were two female gray whales with their calves coming up for air some 4-5 meters away from our boat.

By the time we arrived on shore the clouds had all dispersed, leaving us an absolutely arresting mountainous landscape to enjoy. Our ascent to the lighthouse was delayed slightly because a brown bear was spotted basking in the sun way off in the distance, simply enjoying his hard-earned Sunday. Rodney assessed the situation and determined that the bear should have absolutely no interest in joining us, so we began our ascent. Fun fact that I learned: if you find yourself face to face with a bear, you need to do the most counterintuitive thing and run and scream AT the bear, not away from it. Apparently bears get frightened by insignificant humans screaming - go figure!

To get to the lighthouse we needed to cross parts of the former Inuit settlement of Naukan. The Soviet government relocated these people to other Chukotka settlements in the 1950s as it was thought they posed a security risk, supposedly because of the close proximity of Alaska. It is still possible to sense the melancholy in the air because the people never wanted to leave.

I'm a snowboarder, so ascending a mountain doesn't quite have the same appeal as riding down it. The hike to the lighthouse was more than worth it, though. Once you're up there, an astounding panorama opens up right in front of your eyes. If you look far enough, you can make out Ratmanov Island (Big Diomede Island), Russia's easternmost territory situated a couple of miles from Little Diomede Island, a territory of the U.S.. I even waved in Alaska's direction in case Sarah Palin was watching from her backyard.

I could have spent the entire day by the lighthouse taking in the natural beauty and the sun, but the sea waits for no one. I must concede, though, that a nice cold beer (or two) would have made the whole thing picture perfect. On my way back down to the beach, I wandered past the abandoned Soviet-era border guard houses but didn't dare take a look inside as they were very precariously perched on the cliff. According to Rodney, a few of these houses have already collapsed as the cliffs eroded over time, and I wasn't too keen on being in one of them if they chose today to fall into the water.

I had a few minutes before Zodiac boarding was due to commence, so I did what I always do when there's a bit of sun at the beach - stretch out on the sand and enjoy the incoming Vitamin D. Turns out it's just as pleasurable up in the Arctic as it is somewhere in southern Spain.

A hot shower felt amazing and a freshly-cooked lunch felt even better after such an eventful morning. After lunch, we had an afternoon of lectures - one on the story of the arduous survival of the Karluk expedition and the other - even more somber - one on the fate of the polar bears in the Arctic.

According to the daily program, the rest of the day would be spent "making an attempt to get to Wrangel Island". The word "attempt" and this morning's uncertainty until the very last minute just puts into perspective how small we are as humans. We try to bring everything - including nature and the elements - under our control, only to be rightfully put back in our place.

I do hope our journey to Wrangel Island will be as smooth as possible.