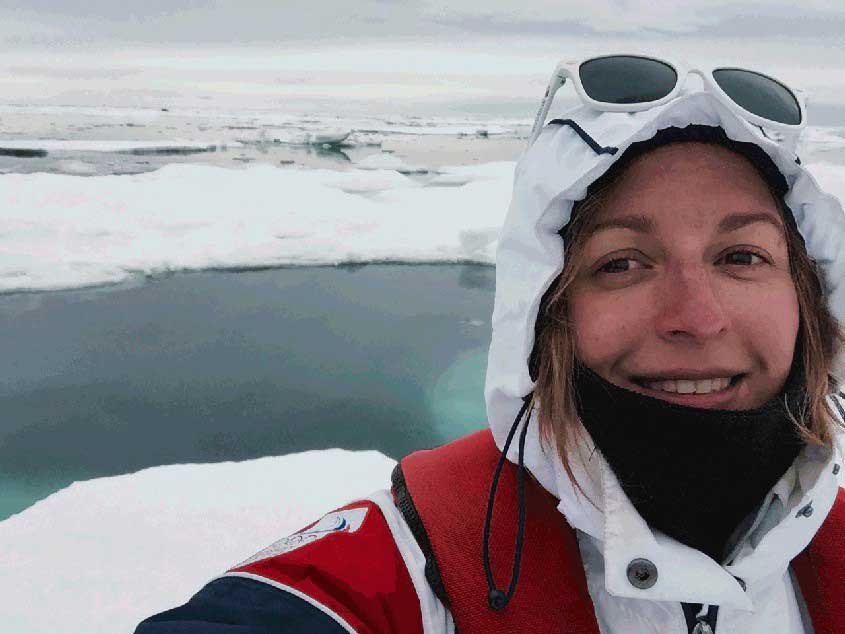 Taking a photo on ice.

Maria Stambler
Discovering the island's south side in all its glory

Two beautiful sunny days in a row?! Such luck is almost unheard of here on Wrangel Island. Although it is windier today than yesterday, it's nothing that a thick scarf can't fix. The strong northerly winds, however, meant that we had to hang on extra tight to the ropes on the Zodiac.

Our first stop was Devil's Creek, an important archeological site that suggests that Eskimos knew about this island more than 3,000 years before the Europeans did and were present here at the same time that mammoths were dying out. There was nothing diabolical at all about this perfectly pleasant little creek.

After everyone took a couple of photos by the creek for the family album, we proceeded to walk about a kilometer west to reach the 180th Meridian (the border between the western and eastern hemispheres). Now, a Wrangel kilometer is not quite the same as a mainland kilometer, so reaching it took a little while longer than expected. On the way we saw some empty crab shells, piles of unmelted snow and even chunks of ice that at one point were floating in the ocean (and perhaps had a couple of cute seals perched upon them).

Some members of the group were then offered the chance to slowly head back to the ship, while those who were feeling more energetic could join Rodney on a longer and more arduous walk to the summit of one of the hills ahead of us. The latter would have been about 2-3 Wrangel kilometers. There was one catch: if you joined a certain group, there would be no way of changing your mind midway and tagging along with the other group, as the island is known for its sizable polar bear population.

Several times, especially at the steepest parts, I asked myself what on earth I was thinking when I decided to join Rodney's uphill trek. My question was answered when we reached the summit and the most breathtaking view of the valley, river and inland mountains sprawled out in front of us while the entire blue expanse of the Arctic Ocean remained glistening in the sunlight behind us.

Today's lesson: when in doubt, take the longer trek up because the view will always be worth it. Plus the calories hate this kind of stuff.

By the time we made it back to the Spirit of Enderby I was feeling sufficiently peckish so the walk from the Zodiac to the dining room saw me make zero pit stops. Lunch wasn't as leisurely as usual because we needed to make one more landing before leaving Wrangel. Unfortunately, we had to leave a day earlier than scheduled due to unfavorable ice conditions on the way back.

The final landing started off rather uneventfully (only when compared to all the other places we'd been to, of course). The sea had totally calmed down and we wandered for about an hour around the grave of an old trapper who refused to leave the island when everyone else left. Nearby, the avian enthusiasts got a few good snaps of the local birds at the estuary. The rolling hills were painted in deep blues, misty greens and warm purples. It was serenity at its best. The most rousing thing going on was a stone skipping contest on the otherwise perfectly placid lake.

Little did we know that we'd be saying goodbye to the island in an almost James Bond fashion. Our awesome Zodiac driver Kostya zigged and zagged us through a maze of drifting ice before landing us on particularly sturdy looking one for the photo opportunity of a lifetime.

The journey back to the Spirit of Enderby took a good 45 minutes but the adrenalin rush made it feel like a few seconds. What a way to bid farewell to Wrangel Island! I must admit that I did get a little emotional as the island started to get smaller and more distant. To get my mind off it, I spent an hour or so looking down over the deck as the Spirit of Enderby plowed through any drifting ice chunk in its way. A couple of the ice chunks even had curious polar bears on them! Obviously, the captain didn't plow through those.

Tomorrow we are at sea before attempting to make our final stop of the expedition on Kolyuchin Island. "Attempting" being the key word.