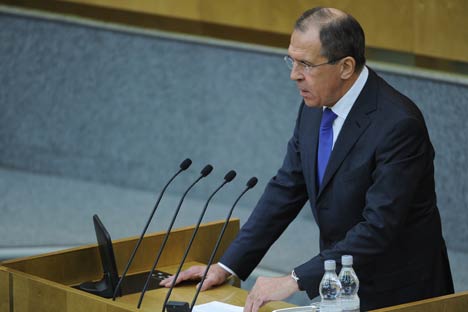 The chief task of the Russia’s 201st military base is to guard the Tajikistan’s porous mountainous border with Afghanistan which is a major route for drug-trafficking to Russia.

Russian Foreign Minister Sergei Lavrov paid a visit to Dushanbe last Thursday to sort out the differences between Russia and Tajikistan over the implementation of the agreement on the 30-year extension of the lease of Soviet-era 201st military base on the territory of former Soviet Central Asian Republic.

The agreement on the extension of lease of the military base which Russia considers as a bulwark against Islamist militancy and drug-trafficking from Afghanistan, had been signed by the two countries’ Defence Ministers in early October last year, during the visit of Russian President Vladimir Putin to Dushanbe, the Tajik capital.

Russia’s 201st military base spread over three locations of Dushanbe, Kulyab and Kurgan-Tyube, in Tajikistan, hosts 7,000 troops. It was established in 1993 and deploys Russia’s largest military contingent on the territory of a foreign country. The agreement on extending the lease of the military base with the option of repeatedly prolonging it for five years after that date, is expected to strengthen Russia’s strategic position after the US-led NATO troops leave Afghanistan in 2014.

In addition to the agreement prolonging the military base, due to expire on January 1, 2014, Moscow also signed documents as part of a package deal that could bolster Tajik economy. They included providing better terms for Tajik migrant workers in Russia, lifting customs duties on 1 million metric tonnes of Russia’s annual oil petrochemical exports to Tajikistan, allocating $200 million to rearming the Tajik army and making investment in small-and-medium-sized hydroelectric power plants in the country.

However, serious differences have arisen between Moscow and Dushanbe, since the agreement on the extension of lease of the Russian military base was signed by Russian and Tajik Defence Ministers on October 5, in Dushanbe, in the presence of Putin and his Tajik counterpart Emomali Rakhmon. Now Tajikistan claims it will ratify the agreement prolonging the lease of the military base until 2042 only after Russia ensures preferential treatment for Tajik migrant workers in Russia and lifts duties on petrochemical exports.

“They will ratify the agreement on the status of Russia’s 201st military base only after Russia honours the two memorandums signed at the same time as the agreement,” Tajik Foreign Minister Hamrokhon Zarifi told Russian daily newspaper Kommersant after his talks with  Lavrov.

However, contrary to the claims by Tajikistan, Lavrov made it clear that Moscow wants to address these issues as “a package,” indicating it also wanted to “synchronise” these issues with the ratification by Tajikisktan of the agreement on the extension of lease of Russia’s 201st military base.

According to media reports, Moscow’s promise of improving the terms of Tajik migrant workers to Russia and lifting the customs duties on petrochemical exports to Tajikistan, were formalized in MoUs and Dushanbe is currently waiting for Russia to honour them.

“But Moscow insists that they first settle several related disputes,” Kommersant wrote after Lavrov’s talks with Zarifi in Dushanbe, referring to the agreement reached by the sides that Tajik citizens will be able to stay in Russia without registering for up to 15 days, and to receive three-year work permits.

For Tajikistan, the preferential treatment of its migrant workers in Russia, is crucial because with its highest poverty levels in the former Soviet Union, the country relies heavily on labour migration to Russia.

According to the Russia’s Central Bank, remittances from Russia by Tajik migrant workers account for nearly half of Tajikistan’s Gross Domestic Product (GDP), which keep its rickety economy afloat. In 2011, over 1.1 million Tajik workers - a third of Central Asian country’s working-age population - earned their living in Russia, sending back home remittances worth about $3 million.

It may be recalled that relations between Russia and Tajikistan were strained in 2010 when Tajik officials impounded two Russian cargo planes which were returning from Afghanistan via Tajik territory after a humanitarian aid assignment. The two pilots, a Russian and an Estonian, were kept in jail for eight months on charges of smuggling plane parts until Moscow began a crackdown on illegal migrants from Tajikistan, seriously affecting the ties  between the two countries.

So far as, MoU on Russia’s petrochemical exports to Tajikistan are concerned, it includes a disputed provision on reexport. Russia does not want Tajikistan to resell petrochemical products to other countries, but Dushanbe is reluctant to guarantee this.

“Tajikistan wants the sides to settle the immigration and petrochemical issues quickly for financial and political reasons,” the paper said, adding “President Emomali Rakhmon would like to visit Russia before the Tajik presidential elections in November in order to secure the Kremlin’s support for his policies.”

“The successful implementation of the recent agreements between Russia and Tajikistan, would increase his status,” it noted, referring to Rakhmon’s seeking another seven-year presidential term.

“It is important to Rakhmon to remain in power in 2013, and the Kremlin’s support will be decisive,” Zafar Abdullayev, a Dushanbe-based political analyst was quoted as saying.

After the talks with Zarifi, Lavrov told the reporters that both of these disputes would be settled by the end of March. However, an unidentified  source in the Russian delegation told Kommersant that solution to these issues depends on the Tajikistan’s simultaneous ratification of the agreement on the Russian military base.

“We are ready to meet Tajikistan halfway on the disputed issues, but only if it completes the process involving the base,” he said.

During his visit to Dushanbe, Lavrov also met Rakhmon and discussed with him the prospects of Russian-Tajik cooperation in neutralising the threats emanating from Afghanistan. “We have discussed reinforcement of the Tajik-Afghan border after 2014,” he told reporters.

The chief task of the Russia’s 201st military base is to guard the Tajikistan’s porous mountainous border with Afghanistan which is a major route for drug-trafficking to Russia while concern about Islamist militancy spreading from Afghanistan has increased with the approach of the NATO-led coalition's withdrawal of troops in 2014.

In a joint statement issued after their talks in Dushanbe in October, Putin and Rakhmon said they considered “stopping the threats of terrorism and drug-trafficking from the territory of Afghanistan as one of their priorities in efforts to maintain regional stability.”

“Together with the base at Kant in Kyrgyzstan, the military base in Tajikistan will serve the interests of Russia,” Putin told the Russian troops at the 201st military base.

Initially, Tajikistan had wanted Russia to pay a full price for extending the lease of the military base, but Moscow declined saying Dushanbe needed the 201st military base for its protection after the NATO’s pull out from Afghanistan.

“We need this base, and Tajikistan needs it,” Putin’s foreign policy aide Yuri Ushakov had said after the signing of the deal on the extension of lease of the military base, adding Russia would pay a “symbolic sum” to extend the lease on the base.

“We are talking about certain sums, but we are getting this base virtually free of charge,” Ushakov said.