No change in Russia’s Syria stance 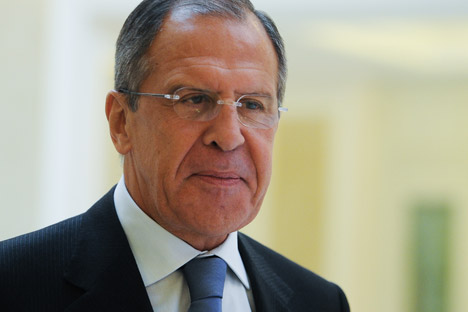 Russia has insisted from the very beginning that dialogue with the Assad government and opposition rebels was necessary for restoring peace in the country.

Reiterating that Russia firmly stands on its position on Syria, Foreign Minister Sergei Lavrov has once again nailed down the West’s recent canard over its actions regarding evacuation of scores of its citizens from Syria last week amid the continuing violence in the country. Russia’s Emergency Situations Ministry’s two planes brought back 77 of its citizens, mainly women and children, from Beirut (Lebanon) to Moscow on January 23, after they were earlier safely escorted by Russian embassy officials in buses out of Syria. The evacuation is the first since the start of the Syrian conflict nearly two years ago.

Russia’s emergency evacuation of its citizens, who had requested the government for help to take them out of the country, was orchestrated by the West as a signal that Russia was changing its long-standing stance of support to Syrian President Bashar al-Assad, anticipating his imminent ouster, in the near future.

Commenting on the evacuation of Russian citizens from Syria, US State Department spokesperson Victoria Nuland said, “It is not surprising and it speaks to the continued deterioration of the security situation and the violence that Assad is leading against its own people.”

When correspondents asked her about the Russia’s faith in Assad, Nuland said, “If you look at the Russian public statements over the last month, they have been evolving somewhat in terms of the level of confidence in whether Assad was going to make it or whether Russia actually had an interest in that.”

However, Lavrov at his annual press conference to sum up the results of Russian foreign policy, in 2012, last Wednesday dismissed as baseless the speculation by the Western experts that a partial evacuation of the Russian citizens from Syria, is the beginning of mass evacuation.

“There is an evacuation plan, as we have plans for any country, in case of an escalation of the internal situation, but we have not yet put it into action, as in our assessment the situation does not demand it,” he said.

“As for the Russian Embassy, we proceed from the situation that there should be no non-essential staff there,” Lavrov said, adding “Families have left long ago, but the Embassy is continuing to function in full.”

As of today, there are tens of thousands of Russians living in Syria. Most of them are Russian women who are married to Syrians, Lavrov said without giving any exact total number of Russian citizens in the country. According to Russian media reports, currently there are about 40,000 Russian citizens and their dependents living in the war-troubled country.

Most western observers also cite the presence of a large Russian naval fleet, including several massive personnel transports, as a stand-by in the Mediterranean Sea in order to evacuate Russian citizens should the need be.

The source said Russia's large assault ship Saratov was also heading to Tartus Port, where it will undergo minor repairs. The assault ships of the Baltic and Black Sea Fleets will finalise their mission off Syria's coast at the end of January, he added.

Today, ships sent by different Russian fleets the Mediterranean Sea include the missile carrying cruiser Moskva, the large anti-submarine ship Severomorsk, the surveillance ships Smetlivy and Yaroslav the Wise, the sea-going tankers Ivan Bubnov, Dubna and Lena, as well as the towboat Altai, the agency reported.

Russia has been a key supporter of Assad since the Syrian violent conflict started in March 2011, with the opposition staging increasing demonstrations against the government, seeking Assad’s ouster before any dialogue could begin. Along with China, it has vetoed three sanctions at the UN Security Council to force Assad out of power or put pressure on him to end the bloodshed.

Russian President Vladimir Putin has repeatedly stated that Moscow was not trying to prop up Assad, stressing that its vetoes and opposition to the UN sanctions are driven by the principles of non-interference in the internal affairs of a sovereign state. He has also warned Russia will not allow in Syria a repeat of events in Libya, where NATO intervention, authorised by the UN Security Council, after Moscow abstained from a vote, helped rebels topple Muammar Gaddafi.

Lavrov also made it clear at the press conference that for Russia the priority in the Syrian crisis remains the soonest possible end to the bloodshed in the country and stabilization of the situation there, and not keeping Assad in power or overthrowing him. “But other external players in the conflict clearly have other priorities,” he said.

Lavrov strongly slammed the Syrian opposition coalition, saying nothing positive would come from its continuing “dedication” to an armed struggle. “Other participants in the ‘action group’ support the opposition and its war against the Assad regime,” he said.

“The National Syrian Coalition declared that its aim is the toppling of the Assad regime and its institutions, which directly contravenes the Geneva agreement, where it is stressed that state institutions must be maintained,” he added.

Lavrov also warned that opposition calls to remove Assad prior to any negotiations were hindering efforts to end the violence in Syria.

“Everything runs up against the opposition members' obsession with the idea of the overthrow of the Assad regime. As long as this irreconcilable position remains in force, nothing good will happen, armed action will continue, people will die,” he said.

Lavrov accused the West and Arab countries that have recognized the opposition Syrian National Coalition of undermining chances for a peaceful solution to the conflict by granting too much support to the rebels.

Russia has insisted from the very beginning that dialogue with the Assad government and opposition rebels was necessary for restoring peace in the country. It has also vowed to continue efforts to contact not only the government but also the opposition, claiming the future of Syria should be decided by its own people.

“All must sit at the negotiating table – Sunnis, Shiites, Alawites, Druzes, Christians. Only this way it is possible to establish a national dialogue. And if anyone is ignored, the civil war will continue,” Russian Prime Minister Dmitry Medvedev said in an interview to CNN on January 27, referring to the involvement of all political forces to prevent the civil war.

“But on the other hand, by no means should a situation be allowed in which the current political elite is swept away by armed actions, because then the civil war will last for decades,” Medvedev warned.

“That is why the task for the world community, for all countries, including the United States, the Europeans and regional powers, such as Saudi Arabia, Qatar, and others, is to sit the parties down for negotiations, and not just demand that Assad go and then be executed like Gaddafi or be carried to court sessions on a stretcher like (Egypt's) Hosni Mubarak,” Medvedev stressed.

However, Medvedev also admitted that Syrian government was not ready for negotiations, saying Assad was far too slow to implement promised political reforms. “He should have done everything much faster, attracting part of the moderate opposition, which was ready to sit at the table with him, to his side,” he said, noting “This was his significant mistake, and possibly a fatal one.”

He also said that with every day, every week and every month the chances of his preservation were getting smaller and smaller. “But I repeat, again, this must be decided by the Syrian people. Not Russia, not the United States, not any other country.”