Nikita Sorokin
The Voice of Russia 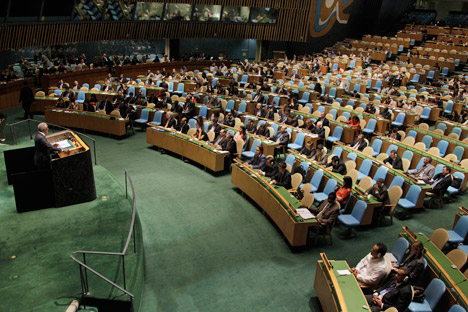 Russia believes that reforming the Security Council would be helpful in mitigating the American domination of the UN.

foot-dragging at the ministerial conference on reforming the UN Security Council that has just ended in Rome. Indeed, the UN’s governing body badly needs reform.

“The UN’s predecessor, the League of Nations, was an instrument of global domination operated by Great Britain and the United States,” says Dr Leonid Savin, Editor-in-Chief of the Moscow-based Geopolitika, or Geopolitics, journal. “The UN Security Council remains much the same, save for the moderating influence on non-Western members including Russia and China. Germany and India feel discriminated against and argue that many international crisis situations, including those in Syria and Libya, would become better tractable at the hands of an enlarged Security Council, which would include several more permanent and many more non-permanent members.”

Unfortunately, Savin says, initiatives of this kind get bogged down in the almost 200-member UN General Assembly and encounter powerful opposition by the United States.

“The Security Council as it is has shown its inability to cope with the rise of geopolitical turbulence observed in the world in the period since the millennium, says Dr Yevgenia Voiko, a foreign policy expert at the Moscow-based Institute of Political Conjuncture. “This means it has to be overhauled, as probably has the entire United Nations organisation.”

Russia and China have used their permanent seats on the UN Security Council to veto unfair sanctions against Iran and outside interference in the conflict in Syria. Russia believes that reforming the council would be helpful in mitigating the American domination of the UN even further. At the same time, it does not haste any reform, fearing a larger Security Council would become a cumbersome bureaucracy incapable of tackling crisis situations with sufficient speed.

Putting together a ‘road map' for UN reform remains a matter for discussion.