Iskander missile systems for all directions 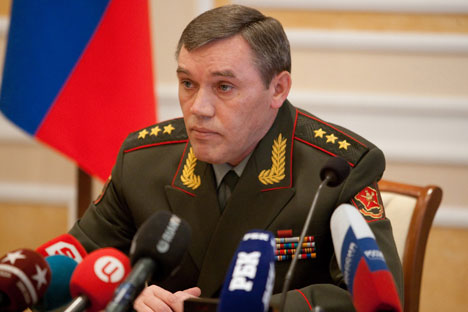 Chief of General Staff of Russia’s Armed Forces Colonel General Valery Gerasimov, said on Thursday that the level of military threats to Russia might increase substantially over the next few decades.

“The level of existing and potential military dangers facing Russia might rise considerably during the period through 2030”, he was quoted by RIA Novosti as saying at a press conference in Moscow.

According to Gerasimov, the level of military danger facing Russia will be determined by the struggle among the leading nations for fuel and energy resources, markets and living space. Military potential will be actively used to secure access to those resources, the General believes.

Defence Minister Sergei Shoigu stated at the end of January that military dangers facing Russia were on the rise. “Methods based on use of force continue to play an important role in resolving economic and political conflicts between countries. Military threats facing Russia from a number of directions are increasing and there are hot spots close to our borders”, he said, adding that Russia should be ready to respond to any challenges or threats. “To be able to do so, we need armed forces with an optimal structure, an efficient command system, modern arms, and professional personnel”, Shoigu said.

“Nobody denies the possibility of large-scale wars and it is out of the question not to be prepared for them”, Gerasimov said at the time, supporting the Minister’s view that “at the same time, spots of instability around our borders constitute the biggest threat to our nation at the moment”.

According to Gerasimov, a strategy for the Russian Army’s short-, medium-, and long-term development has been developed for maintaining its combat readiness.

Gerasimov added that the number of privates and sergeants serving in the Russian Army under contract would reach 425,000 by 2017.

He promised that all missile brigades of the Russian Army would be equipped with Iskander complexes by 2020, adding that the S-500, the S-300V, and the Buk-3M would be also deployed by that time.

The General also announced that the Air and Space Defence (A&SD) system would receive two brigades armed with S-500 and S-400 complexes by 2020, by which time formation of A&SD forces would be completed.

“We are planning to create two A&SD brigades armed with S-500 and S-400 complexes by 2020. We will also take delivery of Russian-made drones”, Gerasimov told a press conference in Moscow.

He added that the Russian Army would receive 200 new military cargo planes.

“A lot of military equipment is being purchased right now”, Valery Kozyulin, Director of the conventional weapons programme of the Russian Political Studies Centre said in an interview with the Vzglyad newspaper. “Serious rearmament of both the Navy and the Air Force is underway. Russia has never had such a large defence budget since Soviet times”.

Former Deputy Defence Minister for armaments Colonel General Anatoly Sitnov expressed scepticism about the numbers cited by the Chief of General Staff. “What headcount did they have in mind? If they calculated this for a peacetime headcount, that is one thing. If it is for permanent combat readiness units only, that is another matter. And if it is only for the Western theatre of operations, that is an entirely different matter altogether”, he said. “Where did the 16% of new weapons figure come from, if, in reality, twelve aircraft have been received?” the General asked. “Another question is how you define new military equipment. If it means fifth-generation equipment, none exists. If they want to talk about generation 4+, such equipment accounts for perhaps 3% of the total. Fourth-generation equipment is 35%. But its present condition is a totally different matter”.

“The share of ultramodern weapons in a modern army should be around 12–15%. That should be more than enough. Modern equipment should constitute 35–40%. The remaining weapons may be transitional, because weapons should be replaced. Making all weapons ultramodern in the space of two years is physically impossible, technically unfeasible and financially prohibitive. Weapons are replaced at eight to ten-year intervals”, he added.

He added that units ranging from battalion to brigade, as well as military command bodies, would receive training at the centres. New simulators and laser shooting and target destruction imitators are to be used for training.

Gerasimov announced last December that troops training centre with modern equipment would soon appear at the Mulino training grounds in the Nizhny Novgorod Region. He said that the Mulino centre “would allow training and assessment of the actions of units and individual servicemen while simulating combat in real time”. “We intend to set up such centres in every military district shortly”, Gerasimov said.

He went on to say that the Ministry of Defence would get its own R&D units.

“Under the guidance of Deputy Minister of Defence Colonel General Oleg Ostapenko, an entire range of military R&D units is being established, including a division of innovation technologies and new equipment”, Gerasimov said.

He added that the Ministry was working on establishing a future military scientific complex to de divided into three levels.