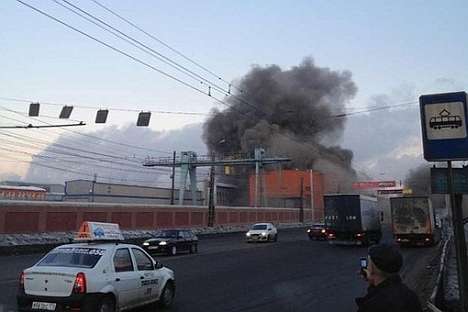 The meteorite fell in the Chelyabinsk region on Friday, Feb. 15, 2013. Source: vk.com

A global set of meteor defence measures includes more than 20 variants of dealing with meteoroids, comets and other space objects that pose a potential threat to the Earth.

The Russian Planetary Defence Centre will need a maximum of 7 years to create a system that would protect the Earth against meteors and other space debris. At present, scientists have 24 scenarios to save the planet from Near-Earth Objects. In addition to technology, people should be prepared for meteor disasters as well.

A global set of meteor defence measures includes more than 20 variants of dealing with meteoroids, comets and other space objects that pose a potential threat to the Earth. Russia’s space expertsand emergency workers believe that a system that guarantees people protection against meteor impacts should be dealt with first, particularly following the meteor strike of several days ago when radars were powerless to help. A whole network of shelters and bunkers should be built to secure protection against meteorites. In addition, a number of satellites will be sent to orbit in the next few years to track dangerous objects flying by.

A Voice of Russia correspondent met Anatoly Zaitsev, director of the Planetary Defence Centre, who expressed the following views: “The satellites should be provided with telescopes. Flying debris cannot always be detected from the Earth because astronomers can observe only the dark sideof the sky from the Earth. Reconnaissance satellites are also needed to explore the nature of the debris. These ‘scout rockets’, which will follow the shortest trajectories, will provide data needed to organize the launch of interceptor rockets. The objects that pose a danger to the Earth should be pushed off their trajectories or destroyed.”

The Russian-proposed meteor defence system makes it possible to protect the Earth against meteors with a radius of 10 metres, like the one that hit Chelyabinsk, to 100 metres. 100-metre asteroids make up the lion’s share of asteroids orbiting the Earth.

A Chelyabinsk school teacher saved her class from the meteor impact by ordering them to take coverunder their desks. The shockwave from the meteor strike smashed all windows in the classroom. The teacher, Yulia Karbysheva, sustained numerous cuts but her children escaped unharmed. Eventhough she had no idea that the fireball they suddenly saw outside was a meteor, Karbysheva knew how to act in case of an explosion. All teachers are trained to act in this way, the school’s deputy director Oksana Cheryomina says. “The teacher must have remembered what she was supposed to do in case of emergency and did it. She must have attended all relevant trainings. On top of that, she demonstrated personal courage.”

Experts who examined the debris left by the Chelyabinsk meteorite have come to the conclusion that it won’t affect the environment or people’s health, Dmitry Penemanskiy of the Ural FederalUniversity, says. “A chemical test of the recovered debris revealed the presence of meteoritic matter. A search group consisting of university staff has left for Chebarkul again in the hope offinding more fragments. Judging by the fragments recovered so far, the meteorite that crashed in a lake near Chelyabinsk was a chondrite. It poses no threat to the environment or human life but is of great scientific interest.”

While scientists are busy studying the meteor debris, locals are after fragments of extraterrestrial stones as well. Pieces of the meteorite have been offered for sale on the Internet. Some cost as much as $15,000.