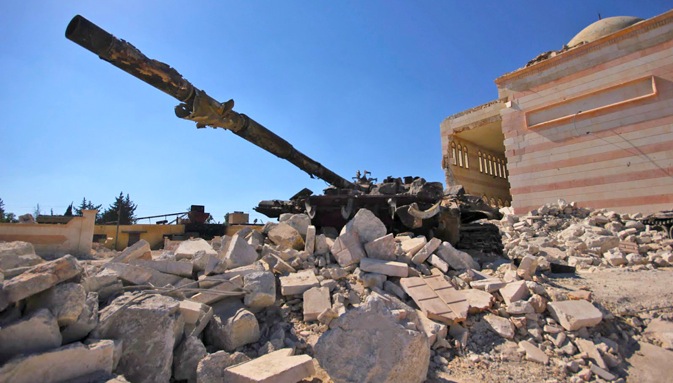 Moscow is looking for a force to take responsibility for the settlement in Syria.

While Western actors push for the creation of an interim government in Syria, Russia is pessimistic about chances for improvement in the situation. Moscow sees no state willing to guarantee such a government by use of force. Furthermore, Moscow believes Assad’s opposition is too splintered to come to the negotiating table as a unified voice.

As the war in Syria claims more and more lives, the West insists that the only chance to avoid religious strife and chaos is to pass a U.N. Security Council resolution calling for the creation of an interim government that will be guaranteed by “a serious external force.” Russia, which has its own lucrative interest, seems to be an obstacle, however, since it teamed up with Iran and China to protect its ally and client, Bashar al-Assad.

In reality, it is not that simple. For one thing, none of the international or regional players are willing to accept responsibility for the situation in Syria after the presumed fall of the current regime — in other words, to become the “serious external force.”

The Gulf states lack military might. Turkey, which has the second largest army in NATO, is not eager to burden itself with involvement in a crisis that is likely to take years to settle and might provoke new violent confrontation with the Kurds.

The U.S. and Europe almost openly declare that they do not want to be dragged into “new Iraq or Afghanistan.” NATO head Anders Fogh Rasmussen believes that foreign military intervention might not lead to a solution to the conflict, but it may even make things worse.

“It is my firm belief that any foreign military intervention would have unpredictable repercussions, because Syrian society is very complicated — politically, ethnically, religiously — and the regional context is very, very complex," Rasmussen said.

The West must also keep in mind that the Syrians themselves are not likely to welcome foreign troops on their territory. Even the opposition is not asking for an intervention, since it knows the negative public sentiment toward such action.

Under these circumstances, in order to prevent further violence, blue helmets or a joint Arab force with a wide mandate are preferable. The United Nations and Arab League envoy for Syria, Lakhdar Brahimi, mentioned possible deployment of U.N. peacekeepers.

U.N. peacekeeping chief Herve Ladsous even acknowledged that, “in certain scenarios we will be called to help in participating in the stabilization of the country and support the political process.” The parties still have to agree on deployment first, although peace enforcement as it was done in the former Yugoslavia is unlikely.

The Taif Agreement of 1989, which ended civil war in Lebanon, showed that a peace settlement is possible, even after a decade-long confrontation. That agreement, however, was achieved due to the fact that external actors supporting main Lebanese groups also wanted peace and were ready to cede some of their ambitions.

Brahimi suggests using agreements reached in Geneva in June 2012 as a framework for the settlement. Moscow shares this position. Furthermore, Russia is ready to support a U.N. resolution based on Geneva solutions, if the vote in the Security Council is preceded by an agreement between Assad and the opposition.

In the meantime, the Russian Ministry of Foreign Affairs admitted that it does not see any perspective for improvement of the situation in Syria. According to Deputy Foreign Minister Gennady Gatilov, one of the reasons for this is that Western countries and their allies do not work properly with the opposition.

Moscow is evidently wary of the Syrian opposition. As Foreign Minister Sergey Lavrov put it, “there is no negotiating team on behalf of the opposition, and this coalition includes too many different groups to be able to agree on a unified delegation.” Russian diplomats remember well last year’s failed cease-fire, which was ignored by many armed groups.

There is also the unfavorable impression made by the people from the Syrian National Council, who exercised lots of propagandistic rhetoric but failed to suggest any concrete solutions during their visit to Moscow.

However, Russia is not giving up dialogue with Assad’s adversaries: It is trying to figure out what they are worth and whether they can keep their promises.

During a security conference in Munich, Lavrov personally reiterated the invitation to opposition National Coalition chief Ahmed Moaz al-Khatib to visit Moscow. Russia’s ambassador at the U.N., Vitaly Churkin, said that Moscow is also ready for contacts with opposition representatives who plan to open offices in New York and Washington.

Meanwhile, Russia provides humanitarian assistance to the Syrian refugees. During his meeting with Lebanese leader Michel Suleiman, President Vladimir Putin promised financial and humanitarian aid for the refugees in Lebanon.

Many countries want Russia to force Assad to leave. However, they forget that a huge amount of armed people stand behind the Syrian president, and they will not let Assad surrender and leave them at the mercy of the winners. So, even if Moscow cuts all support to Assad, he will not resign without a clear perspective of acceptable settlement and guaranties of security for 2 million of Alawites.

For another thing, Russia fears, in the absence of an agreement between Assad and the opposition, that a U.N. resolution could become an excuse for a Libya-style military campaign, which would cause the collapse of the existing state but not give way for a new one.

The Libyan experience showed that the West and its allies tend to wash their hands and turn whole country adrift. In the case of Syria, this is likely to lead to a religious bloodbath much worse than that in Iraq in 2005–2007.