Coping with the times in Malé 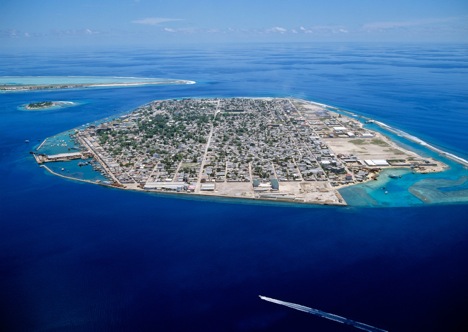 Once the dust settles on the Nasheed affair, Delhi needs to ponder why such a significant section of the political and security elites in the Maldives has come to negatively perceive its policies.

There is audible relief in Delhi that a potentially ugly situation in India’s ties with Maldives has been averted. However, this shouldn’t lead to triumphalism.

The Indian establishment has quietly spread word that a “deal” facilitated the exit on Saturday of the former president Mohamed Nasheed from the Indian compound in Malé where he had taken shelter a week ago. The “deal” apparently involves an Indian-Maldivian consensus that Nasheed will be allowed to participate in the presidential election in Maldives scheduled for September.

However haziness remains that there is more to things than meets the eye. The American ambassador Colombo Michele J. Sison (who is concurrently accredited to Maldives) came to Malé and met President Mohamed Waheed on Thursday to discuss the “current political and economic state of the Maldives” and the latter reportedly “assured” the envoy that “maintaining stability and calm in the country was a top priority.”

Conceivably, the “deal”, if there was indeed one, was more likely a tripartite one. Indeed, Washington lost no time counseling “restraint” on all sides when Nasheed walked into the Indian mission premises a week ago. But on the other hand, a deal is a deal only when all sides agree to it and in this case the Maldivian government furiously denies any. The presidential spokesman spoke in Malé on Sunday rather bluntly: “There is no deal, absolutely no deal with the Indians or anyone else.”

It is entirely conceivable that the long arm of (Maldivian) law may once again try to nab Nasheed so that he isn’t qualified to be a candidate in the September election. The six months between now and September would prove to be a long time in Maldivian politics.

Therefore, prudence and far-sightedness demand a more modest estimation of the denouement of Nasheed’s weeklong sojourn in the Indian compound in Malé. Let us say merely that the denouement was a fortuitous happening, since the more the standoff got prolonged, the greater would have been Delhi’s embarrassment. It was a standoff that belonged to the theatre of the absurd. The point blank refusal by the Maldives President Mohamed Waheed to meet the Indian special envoy visiting the island to negotiate Nasheed’s political future would underscore that feelings were running high in Malé when Ambassador Sison arrived from Colombo.

At the bottom of it all lies the kernel of suspicion in the Maldivian mind that Nasheed acted as per a preconceived script, since he had just visited India where he has many powerful friends within the political, media and corporate elites. In fact, it was during Nasheed’s term in the presidency that a high profile Indian company GMR Group secured the sweetheart deal to run the Malé International Airport in a highly lucrative contract that stood out as India’s biggest ever project export anywhere in the world.

Delhi should strain every nerve to dispel the entrenched suspicion in the Maldivian capital that Delhi is standing shoulder to shoulder with Nasheed in the barricades because of the intertwined business and political interests of the Indian elites. Politics is primarily a matter of perceptions and the Indian claim of being a sincere promoter of democracy on the hundreds of tiny Maldivian atolls inhabited by some 400000 islanders does not sound convincing. In retrospect, Nasheed has done harm to long-term Indian interests.

Meanwhile, once the dust settles on the Nasheed affair, Delhi needs to ponder why such a significant section of the political and security elites in that country has come to negatively perceive its policies. Here the larger issue also comes in – whether this isn’t after all a regional phenomenon rather than a mere Maldivian aberration. A calm introspection becomes necessary to appreciate that that there is a universal image of India in its neighborhood.

Again, there is the larger question of India’s neighborhood policies in the post-cold war era. Clearly, the inheritance from the epochal 1988 episode when India intervened to avert a coup in the Maldives has vanished and that country’s approach to India is changing. Like in the entire South Asian region, the Maldivian political elites too regarded India as a major resource supplier but times are changing and India’s attraction is also waning. The Maldives today has other potential patrons offering aid and it can make choices – United States, China, Pakistan, etc. The Maldivian atolls constitute an extremely valuable piece of real estate between the US military base in Diego Garcia and the Persian Gulf. If it was a lynchpin for Imperial Britain’s World War II strategies in Southeast Asia, today it lies on India’s “soft underbelly” and it is spread plank in the middle of the crowded sea lanes between the Persian Gulf and the Malacca Straits. Against the backdrop of the US’s “rebalancing” in Asia, Maldives occupies a unique place in the geo-strategy of any big player active in the Indian Ocean region.

This is where the lines of cultural communication between India and the Maldives assumes importance. The atavistic fear being expressed by the Indian security establishment for the past 2-3 decades that the Maldives faces the threat of takeover by “Islamic fundamentalists” is not helping matters. It is viewed in that country as the alibi for Indian intervention and the annexation of Maldives in an Indian neo-empire.

Suffice to say, India’s integration projects are not succeeding in the Maldives. The Maldivian is unsure about the fruits of integration into the Indian Garden of Eden. The point is, there are deep-rooted fears and phobias related to India’s regional policies. This has bred an isolationism that spreads to state and public levels. The Maldivian families living in the southern Indian city of Thiruvananthapuram do not care to interact with the local communities and are happily confined to their ghettos, while clinically focused on tapping into the Indian resources – schools and hospitals or shopping malls – which has been the very purpose of their migration to Kerala. In comparison, even in the worst periods of India-Sri Lankan relations, the Sinhala elites never really ceased social discourses with India.

To be sure, India needs to make up its mind as to what it wants in Maldives. Malé is not about to roll over in panic if Delhi shows irritation that GMR Group has been put out of business in the airport deal. The ruling elite is crafting its own variant of democracy and resents India’s prescriptive approach, which it perceives as not quite driven by altruistic considerations. (After all, there is one charismatic politician languishing in jail in Hyderabad too.) Thus, India figures as a bullying power and this is at the core of the strains in India-Maldives working relationship today.

If Delhi tries to force the pace, it will only prompt Malé to accelerate its policies to diversify the country’s external relationships and develop hedges to counter the perceived Indian machinations. India, therefore, needs to craft long-term policies that put primacy on regional stability. Its paramount strategic objective at the moment should be to build afresh a positive image. This requires a consistent approach to that country, willingness to commit greater resources and an imaginative game plan to use from time to time the game-changing tools from its formidable repertoire of soft power.