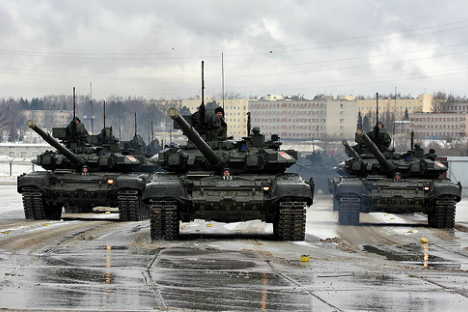 Ukraine has once again decided to deliver a big party of 110 main battle tank (MBT) engines and related parts to Pakistan under a $50 million contract. Source: Flickr/ MATEUS

While in the past years, Moscow has made it clear that it will never supply arms to India’s enemies, Kiev has always been ambivalent on this issue.

Committing an obvious breach of mutual trust and diplomatic understanding with India, the former Soviet Republic of Ukraine, has once again decided to deliver a big party of 110 main battle tank (MBT) engines and related parts to Pakistan under a $50 million contract.

Ukraine’s government-controlled weapons exports agency, Ukrspetsstroi, announced last Monday that the MBT engines and parts will be manufactured at Malyshev Plant in Kharkov, under a four-year agreement signed recently. The plant specialises in producing armoured vehicles and their components.

Earlier, in 1997-99, Ukraine supplied 320 T-80UD MBT engines to Pakistan for its al-Khalid main battle tank under a $650 contract. Pakistan procured the T-80s to counter the T-90 main battle tanks which were to be supplied by Russia to India under a contract which the two countries had been negotiating for several years. Russia's state arms exporter, Rosoboronexport, finally signed the contract with India to supply 347 T-90S tanks worth $1.24 billion, in December 2007. T-90S tanks were scheduled to gradually replace the outdated T-55 and earlier T-72 versions.

In addition to the supply of T-80s, Ukraine also decided to manufacture medium-size guns for the Pakistani tanks within three to four years in collaboration with China. In June 2002, the two countries signed a contract for delivery of motor-transmission part for al-Khalid tank estimated at $100 million.

With its infrared night-vision optics, antiaircraft machine guns and desert-storming diesel engine, the T-80 tank is a formidable assault weapon. It was Ukraine’s biggest arms sale to date. However, Pakistan's first major purchase of land weapons from a former Soviet Republic raised hackles in Russia, whose factories produce many of the parts that Ukraine's factories assemble into T-80s. Soon after the first 15 tanks arrived in Pakistan, Russia announced that it would not license export of any more T-80 parts to Ukraine, saying that it "strictly refrains" from selling arms to Pakistan.

According to the media reports, Ukraine is participating in the implementation of over a dozen projects in the military-industrial sphere in Pakistan. Contracts have been signed for establishing two repair test bases for T-80s in Pakistan. Kiev may also avail an opportunity to export new air defence units which were recently tested in Pakistan, which are elements of weapons of high precision. Ukraine may also reportedly participate in a major programme on setting up production facilities for Pakistani frigates. Ukrainian organizations and enterprises may get orders for the development of combat ships exterior and supply of gas turbines, acoustic systems and radiolocation units for them, they said.

That Kiev decided to deliver 110 MBT engines and related parts to Pakistan within two months of the first state visit of the Ukrainian President Viktor Yanukovych to India (December 9-12, 2012) was quite unexpected for the observers here as he tried his level best in New Delhi to win over a substantial part of the Indian arms market from Russian dominance, by proposing cooperation in a number of key areas, including aviation, space and shipbuilding.Yanukovych’s visit to India, was the first by a Ukrainian head of state in 10 years.

“It’s a buyer’s market. We have a very potent defence industry which turns out a wide range of quality systems that are competitive in international markets. We are ready to let our Indian partners closely study our products and decide what is the best for them,” Yanukovych had said in an exclusive interview to The Hindu, referring to Russia and Ukraine as the two biggest ex-Soviet arms manufacturers, competing for the Indian weapons market.

After reorganizing its defence industries into bodies under state control, similar to the ones in Russia, Kiev feels it can give a tough competition to the Russian defence enterprises in capturing the Indian weapons market.

In the former Soviet Union, about one-third of defence industries were based in Ukraine, and currently the country is not only carrying out reorganization of these enterprises but also upgrading them on Russia’s R&D model, with a view to engage India for joint research, development and designing ventures. Kiev is already modernising the An-32s, backbone of the Indian Air Force's transport and troop replenishment fleet, and wants a more wide-ranging relationship.

Experts say, while Kiev is willing to upgrade its defence ties with New Delhi, India in fact may be seriously concerned with Ukraine’s increasing military-technical ties with Pakistan, which the Indian government has frequently accused of openly sponsoring terrorist attacks against the country.

While in the past years, Russia has time and again reiterated and made it clear that it will never supply arms to India’s enemies (read Pakistan), Ukraine has always been ambivalent on this issue, terming it as a “sensitive issue of political nature.”

“This is a very sensitive issue and we try not to politicise it. We strictly comply with United Nations’ bans and restrictions and honour all our international obligations,” Yanukovych told The Hindu. “We take account of all factors and act with restraint to avoid provoking enmity or— God forbid — war between nations, but on the contrary, to promote peace and security,” he noted.

However, in a striking contrast to Ukraine, Russia has always stressed that India was its only “strategic partner” in South Assia, ruling out firmly the possibility of any defence deals with Pakistan.

It may be recalled that most recently ahead of Russian President Vladimir Putin’s visit on December 24, Moscow in no uncertain terms declared that it would not supply military hardware to Pakistan.

“We are always cooperating with India to ensure safety of the region. We never created trouble for India in the region as compared to other countries. If someone says otherwise, spit in his face,” Russian Deputy Prime Minister Dmitry Rogozin told Indian mediapersons in New Delhi replying rather in a blunt diplomatic language to a question as to whether Moscow was planning to sell arms to Islamabad.

“We do not do military business with your enemies. We do not transfer any arms to them,” Rogozin, who looks after defence industry and space sector, said.

Rogozin dismissed the speculation as baseless in a section of India media on a number of high-level interaction between Moscow and Islamabad recently, which included the visit of Russian Foreign Minister Sergei Lavrov to Islamabad and Pakistani Army chief Gen. Ashfaq Parvez Kayani’s trip to Moscow in the wake of cancellation of President Vladimir Putin’s visit to Pakistan.

Not only in the field of bilateral military-technical cooperation, but also in civil nuclear energy sector, Ukraine has been attempting to carve out a niche into the Indian market. It has also expressed its willingness to participate in the construction of nuclear reactors in India with an intention of elbowing Russia aside from building nuclear power plants.

Taking part in a business meeting organised by the Confederation of Indian Industries (CII) in Bangalore, during his visit to India in December, Yanukovych said that Ukrainian companies would take part in tenders in the Indian energy sector for providing equipment and other services.

“Ukraine’s ongoing arms supplies to Pakistan and its overzealous drive aimed at offering a stiff competition to Russia in the field of arms sale to its long-time strategic partner India as well as its attempt to infiltrate the Indian civil nuclear energy sector, will definitely harm its relations both with India and Russia,” analysts said.