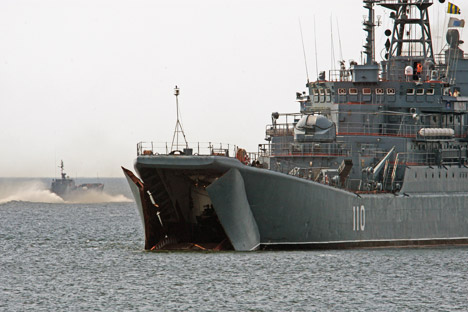 The Russian Navy will fulfil tasks in all parts of the World Oceans. Source: RIA Novosti / Igor Zarembo

The Russian Mediterranean squadron is to be provided with comprehensive logistical support but at present the only Russian base and naval facility abroad is the Syrian port of Tartus.

Russia is due to provide its permanent presence in the Mediterranean Sea by deploying an operational formation of the Russian Navy in the region by 2015. According to the General Staff, the squadron will consist of ships from the Black Sea, the Northern and the Baltic Fleets.

The new formation will be made to the pattern of the Fifth Operational Squadron of the former USSR Navy. During the Cold War, that squadron fulfilled tactical missions in the Mediterranean. At that time the main rival of the squadron was the Sixth Fleet of the US Navy. A year after the collapse of the Soviet Union, on the 31st of December 1992, the Fifth Squadron was disbanded.

Time proved that it was a rash step. The Mediterranean region remains the hub of clashing interests of world’s leading powers. This has been especially clear over recent years with the Arab spring events, Gaddafi’s overthrow in Libya and the protracted civil war in Syria. During his visit to the Black Sea Fleet on the 20th of February the Russian Defence Minister stressed that the Mediterranean region was the core of all essential dangers to Russia’s national interests. Thus, the Russian Navy will fulfil tasks in all parts of the World Oceans.

This is undoubtedly a very serious undertaking. The Russian Mediterranean squadron is to be provided with comprehensive logistical support but at present the only Russian base and naval facility abroad is the Syrian port of Tartus. Secondly, it is essential to update the ships of the Black Sea Fleet, adviser of the chief of the General Staff, former Commander of the Black Sea Fleet Admiral Igor Kasatonov says.

“All this will entail huge costs. From the geopolitical viewpoint, we need this squadron, it is the right decision. As a result, the government will have to exert itself to set up this formation similar to the Fifth Soviet Navy Squadron.”

It should be noted that the Russian government has been contributing to the updating of the Black Sea Fleet for a few years already. Three diesel-electric submarines and three frigates are being built at present. Another advantage is that there should be no organizational problems because the scene of operations was thoroughly explored at the time of the USSR. The aims of setting up this formation are evident, editor-in-chief of The Arms Exports magazine Andrey Frolov believes.

“I believe that first of all this would be showing the Russian flag and highlighting Russia’s ambitions on an international level. This would be the proof that after 20 years Russia has regained what the USSR possessed. Finally, this would give us an opportunity to faster respond to any moves. It often happened in the past that it took ships 4-5 days to leave the port in Sevastopol and reach their destination, while events could develop much faster.”

Experts believe that 2-3 years is a realistic time for updating the fleet. At present, the existing ships are also capable of fulfilling their tasks. The General Staff reports that coordinated action in the future Mediterranean squadron was practised during the Russian naval exercises in the region in January.

First published in The Voice of Russia.