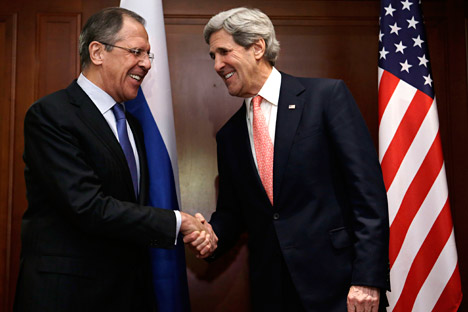 In international politics, including relations between estranged nations, such types of talks, even if symbolic, matter a lot.

The meeting between the Russian Foreign Minister, Sergei Lavrov and the US Secretary of State, John Kerry in Berlin on February 26 holds prospects of a new rapprochement between the two powers of the globe. Though the talks did not come out with declarations with having long term goals for bilateral or multilateral relations, the important point is that both the leaders did not pronounce anything that would worsen the relations. As Lavrov pointed out before the talk, the primary aim of the meeting is to find a ‘common ground’ between the countries, the relations between which have gone astray in recent months. Lavrov reiterated this spirit of finding a common ground after the talks as well. He called the meeting ‘quite constructive’ and observed, “It feels like the second administration of Barack Obama will aim to play a more constructive role when it comes to its foreign policy agenda led by John Kerry.”

In the context of Russia-US relations, the term of reset is relatively new and also popular. It gained currency in 2009, when both the countries moved forward the relations by addressing each other’s concerns. The first Obama administration shelved the idea of East European missile shield as initiated by the predecessor George W. Bush administration. Both the countries developed common approaches on many other international issues. The meeting between former Russian President Dmitry Medvedev and the US President Barack Obama in 2010 had generated hopes for common approach on Iranian nuclear issue. It was expected in circles that rigidities in relations have been moderated, and there emerged a new phase of relations, or what was called ‘reset.’ The recent months, however, have witnessed differences reaching a crescendo. The US adopted Magnitsky Act last December. The act banned entry into the US and imposed other sanctions on some Russian citizens, who it claimed to have links with death Sergei Magnitsky, a Russian accountant and auditor. Russian President, Vladimir Putin termed it ‘unfriendly’ as it ‘poisons our relationship’. There has been a revival of policy of establishing a missile shield in Eastern Europe by the US administration, thus further rising the tension between the two countries. Russia accused the US funded non-governmental organizations supporting anti-government activities in Russia. Last September, Russia ordered US Agency for International Development to leave its country due to its anti-government activities. Russia also adopted a law banning the US citizens adopting Russian children. The recent death of an adopted Russian child in the US provided the Russian government further arsenal to justify this law.

The interesting point, particularly from the prospects of a new reset, is that both the leaders raised all these contentious issues during their about one hour and forty five minutes meeting in Berlin. In international politics, including relations between estranged nations, these types of talks, even if symbolic, matter a lot. When the top diplomats of both the countries meet, it can have a positive impact on later set of deliberations and negotiations. The bottom line is that instead of hazarding on mutual differences, both the leaders attempted to find a common ground so that relations can move forward, and both the countries can develop common position on various international issues including the Syrian crisis, North Korean nuclear test, Middle East problem, nuclear disarmament and Afghanistan. Lavrov’s statement appeared timely and prudent in this context. He said: “the discussion was to my mind constructive and in the spirit of partnership, without of course ignoring the questions which are irritating these relations, including the recently appearing ‘Magnitsky law,’ or the problem of the attitude in the United States towards adopted Russian children. Without closing our eyes to the problems, we are trying to solve them and move on.”

In a world sans any super power and hegemonic pole, Russia and the US can play a dynamic role to address global issues of importance. The meeting certainly devoted considerable time to Syria. The interesting point is that though both the powers are interested to have a peaceful resolution of the crisis, there is a difference about how to go about it. As the UN High Commissioner on Human Rights, Navi Pillay, recently pointed out that the death toll might have touched 70,000, peace is an immediate concern. The UN and Arab League mediator, Lakhdar Brahimi has expressed his exasperation that despite death and destruction happening in public and media glare, nothing positive has come out yet despite rounds of meeting between diplomats. Both countries, however, have a lot of stakes in finding a peaceful solution. Neither of them wants the revival of Al Qaeda as a global menace. The Libyan experience demonstrates that the weapons supplied to defeat Gaddafi have fallen into the hands of the extremists. Secondly, neither of the countries will prefer to see Syria as a hotbed of sectarian strife, in which Shias and Sunnis are polarized and destroy each other, as such a scenario will have wider fallout for the whole Middle East.

It is expected that John Kerry, with his experience in foreign affairs, will play an effective role in fostering peace in world along with Sergei Lavrov. The second Obama administration may adopt a new approach to work with the Putin administration in an environment of trust. Obama in his State of the Union address early this month has emphasized that the US and Russia has to work together for nuclear disarmament. Both the countries are also part of Middle East Quartet and also of six-party talks on North Korea. In the post-cold war globalized world, Russia and the US can move ahead to find ‘common ground’ on various issues. The Lavrov-Kerry meeting has certainly added to such a prospect. It may not be, hence, out rightly illogical to state that the coming months will likely witness positive developments between Russia and the US, with implications contentious issues across the globe.