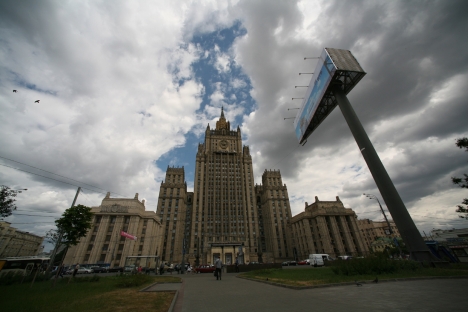 Russia’s much-anticipated Foreign Policy Concept has finally been released. While the latest version doesn’t contain anything revolutionary, it does provide insight into the Russian establishment sees the world.

For the first time ever, the Russian Foreign Policy Concept does not mention the Cold War. All past incarnations invariably blamed the country’s current problems on the legacy of the Soviet Union. While justified at first, this gradually came to sound like an excuse – an attempt to offer a simple explanation that would be acceptable to all. Today, 20 years after the end of the Cold War, it is clear that Russia’s problems are rooted in contradictions that have little connection to that time.

The updated foreign policy concept mentions “the decreasing danger of large-scale war, including nuclear war.” This is an important statement, which shows that Russia is struggling to shed its 20th century big war mindset. Another important admission is that the risks and dangers of the 21st century differ radically from the clear and concrete external threats Russia faced for centuries. As such, Russia needs to take a new approach toward national defense and foreign relations.

The concept points out that “attempts to create individual oases of tranquility and safety will not succeed, given the current global turbulence and growing interdependence of states and nations, and the only reliable insurance against possible shocks is compliance with the universal principle of equal and indivisible security as applied to the Euro-Atlantic, Eurasia and Asia Pacific regions.” This is a departure from the popular Russian myth that self-imposed isolation can be good for development. It simply isn’t possible in the modern world.

An important section of the concept deals with the “civilizational dimension” of global competition and the “rivalry of values and development models within the framework of the universal principles of democracy and the market economy.” This is nothing new in the world of Russian foreign policy, but it has new resonance today. The age of  hyper pragmatism in Russian politics is giving way to an active search for a new ideology and new values. The concept acknowledges the need for this, to its credit. The authors of the concept write: “the growing importance of civilizational identity is the flipside of globalization.”

It is notable that the Arab Spring is interpreted in the concept as the “striving of nations to return to their civilizational roots,” and “a political and socio-economic renewal of society proceeding under the banner of strengthening traditional Islamic values.” Given the widespread belief that developments in the Middle East and North Africa were the result of a clever US strategy or some other conspiracy, this new interpretation comes across as adequate and even daring.

The new version of the concept introduces the term “soft power,” which has gained popularity in the West since its appearance in the early 1990s, but not in Russian foreign policy circles. Vladimir Putin used the term in one of his pre-election articles a year ago, and has since referred to it on multiple occasions as a vital element of foreign policy.

However, the Russian interpretation of “soft power” emphasizes the country’s role in counter-propaganda, whereas Europe and the United States understand “soft power” as an attractive socio-political model that can be applied in other countries. But the fact that Moscow has taken note of “soft power” at all is a step in the right direction. Until recently, Russia preferred to rely solely on hard power, and did not use all of the instruments available to it. Echoing Putin, the authors of the concept write about the “unlawful” use of soft power, clearly referring to Western NGOs, which the Russian president sees as a foreign tool used to destabilize Russia.

Another new element that Russia used to disregard is information security. Given the current situation, the new concept urges “expanding the legal framework of international cooperation to better protect the rights and legitimate interests of Russian children abroad.

It also indicates that Russia is willing to work to improve relations with Georgia “in whatever spheres Georgia is ready to cooperate in, but with due regard for the current political realities in the South Caucasus,” which means that Abkhazia and South Ossetia will still be recognized as independent.

European countries of primary importance to Russia are Germany, France, Italy and the Netherlands, as well as the UK, with which Russia has had troubled relations. With regard to the latter, the authors write: “Russia would like to use the potential of mutual cooperation with Great Britain.”

The concept also mentions a new interest of the Russian leader, Antarctica.

The hierarchy of Russia’s priorities has not changed. As before, the post-Soviet space is the top priority, to be dealt with through the Eurasian Economic Union.  Asia, which has recently moved into the international limelight, still comes after the CIS, Europe and America in Russia’s foreign policy priorities. Russia’s policy toward Asia has not changed, although it would seem that this region warrants greater attention.

Overall, the Foreign Policy Concept 2013 is a reflection of how the Russian leadership views the world. It does not claim to be a far-reaching strategy, which is wise, because making strategic plans would be pointless in the current situation.