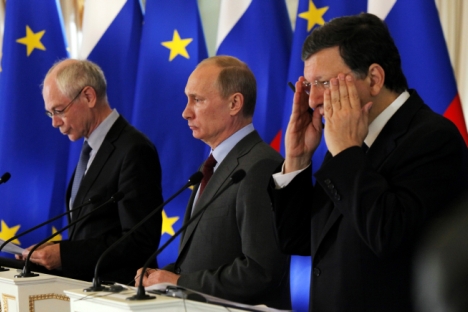 Moscow must press for an Alliance of Europe — a new economic and diplomatic framework among the EU, Russia and the rest of Greater Europe — which could offer a way out of the continent’s systemic crisis.

During the Cold War, the Soviet Union, and in a milder way the United States, imposed external limits on the activities of states and societies, causing longstanding conflicts among smaller countries to be “frozen.” Following the Soviet Union's collapse in the 1990s, those conflicts began to “unfreeze.”

With interethnic tensions already on the rise, Yugoslavia was the first country to dissolve into conflict. Soon after, war broke out between Armenia and Azerbaijan, followed by fighting in Transdnestr and Chechnya. Some conflicts were addressed: The West finally intervened militarily in the former Yugoslavia, and Russia fought in Chechnya for almost a decade and imposed peace in Transdnestr. But others, such as that between Armenia and Azerbaijan, were simply frozen again.

Will Europe succeed in Central Asia?

Fortunately, not all potential conflicts erupted. The Soviet Union did not dissolve into violence, as most other empires have, an outcome for which no explanation short of divine intervention or sheer luck seems to suffice. Despite rising nationalist sentiments and mutual suspicions, Central and Eastern European countries also managed to avoid conflict, thanks to their rapid acceptance into NATO and the European Union.

At that point, the world breathed a collective sigh of relief. But in the early 2000s, globalization triggered the “second unfreezing” by facilitating rapid economic growth in Asian countries that, for two centuries, had been constrained by Western dominance, Cold War rules and institutions and rampant poverty.

With thriving economies came increased strategic clout, leading to the rise of regional geopolitics shaped by national interests and fears, rather than by external forces. The West's failures in Iraq and Afghanistan was followed by the global economic crisis, which exposed severe structural weaknesses in the U.S. and the EU.

As a result, Europe has practically abandoned its global geopolitical role with virtually no evidence of its presence, aside from trade, remaining in East Asia. Although the U.S. has retained considerable influence, the combination of structural economic problems, a divided elite and two de facto military defeats has impeded its ability to exercise that power.

Old alliances — such as the Southeast Asia Treaty Organization, the Central Eastern Treaty Organization, and the Australia, New Zealand, United States Security Treaty — have died or are dying. Meanwhile, forming new alliances has proved difficult. Take, for example, India rejecting what the U.S., with uncharacteristic humility, has proposed.

At the same time, Asia is being roiled by intensifying territorial disputes in the South and East China Seas, as countries revive old claims against each other. East and South Asia are embroiled in an arms race, mainly at sea. Everyone is afraid of China, which remains relatively peaceable but no longer bothers to conceal its growing military capacity. With no pan-Asian security architecture expected to emerge in the near future, the West's departure from the region is generating a security vacuum.

In the Greater Middle East, the fall of one secular dictatorship after another, coupled with the loosening of external control, has incited new — and rekindled old — suspicions, religious disagreements and mistrust of outsiders in general and the West in particular. As a result, the region has entered a period of conflict, social degradation, rising nationalism and growing religious fanaticism.

Most threatening, however, is the possibility that the EU could collapse, triggering a third unfreezing. The EU, which was established to break the destructive cycle of European nationalism that had facilitated the rise of two totalitarian systems and caused two world wars, amounted to the creation of a prototype of a humane world order. After being its own, and thus the world's, worst enemy for centuries, Europe became a beacon of peace.

But resting on the laurels of the EU's founders, successive European leaders largely failed to perceive the competitive challenges posed by globalisation. They seemed to forget that the European project's underlying motivation was political, not economic, which led them to rush into enlargement and set unrealistic goals. Now they must pay for their mistakes by overhauling the entire institutional framework of the EU and the euro zone.

At the same time, Europeans must prepare for an even more profound transformation. To regain economic competitiveness, European countries will have to abandon many of their social-welfare policies and reform their political institutions. Most Europeans prefer to ignore the looming challenge of radical policy reform, owing to the decline in living standards that it implies.

Global leaders must encourage Europe to tackle its problems decisively by offering advice, financial support and constructive criticism. Russia must continue to press for an Alliance of Europe — a new framework for economic and diplomatic relations among the EU, Russia and the rest of Greater Europe — which could offer a way out of Europe's systemic crisis.

The first unfreezing had serious consequences. Now, global leaders must work to minimize the fallout of the second and use all available means to prevent a third.

Sergei Karaganov, honorary chairman of the presidium of the Council on Foreign and Defense Policy in Moscow, is dean of the School of World Economics and International Affairs at Russia's National Research University Higher School of Economics.